Dani Ceballos arrived at the Emirates stadium in the summer of 2019 with no expectations upon him and no clear role for him in the squad. Starting his Arsenal journey under Unai Emery and his regular 4-2-3-1 didn’t turn out as satisfying as everybody wanted it to be and the team’s inconsistency and the manager’s unclear strategy didn’t do him a favour and he wasn’t able to prove as a difference-maker.

Ceballos didn’t have a clear midfield role and the partnerships with Granit Xhaka, Mattéo Guendouzi and Lucas Torreira never seemed to work out. Many of Arsenal’s defensive fragilities were a reflection of the disconnected lines and their uncertain midfield strategy. Both the attacking line and the defenders struggled due to the lack of support and Dani Ceballos didn’t look like the solution.

The start of his relationship with the new manager Mikel Arteta wasn’t easy either as he continued with his inconsistent performance and failed to convince the Spaniard into making him a regular starter. In the times he did get the chance to prove himself, he failed to do so.

Arteta had to fit Ceballos to his strategy and to find a way to split the midfielders’ responsibilities in search of balance. And that’s when the Ceballos – Xhaka partnership showed a glimpse of its potential.

The Spaniard contributed in the last two games before the COVID 19 pandemic and finally managed to show his potential giving the coach a reason to consider him in the future.

While Arteta’s impact showed early on, his tactical intelligence sparkled after the break. The team’s new, more coordinated, tactical approach, using positional play in attack and pressing more aggressively in defence turned out as the perfect fit for many of the players that previously performed mediocrely.

One of these players was Dani Ceballos. His constant aim for improvement and his commitment to the club (despite being a loanee) showed, and he became an integral part of the team’s actions in all phases of the game.

This tactical analysis in the form of scout report will look into his role under Arteta. We will analyse how he fits the Spaniard’s tactics and will conclude if Arsenal need to pay the bill to keep him at the Emirates.

Inconsistency in times of uncertainty

As a typically creative and technical Spanish player, Ceballos quickly had to adjust to the more physical and fast-paced Premier League. As mentioned, he joined Arsenal in times of uncertainty when the team had no winning strategy and the manager rarely had plan B for when things go wrong.

With the “unhealthy” player-manager relationship that Emery and Mesut Özil had, the team was left with no creative force in midfield, especially when it comes to supplying the frontline with quality balls.

Arsenal were struggling in front of the goal due to the lack of support and the disjointed connection between the lines. That’s why Ceballos was brought in as a “temporary” solution.

What wasn’t considered though is that his natural role and movement don’t fit the attacking midfield profile. Not that he is unable to deliver the ball to the final third and create goalscoring opportunities, but he is much more used to dropping back and controlling the central areas rather than staying high and being the creative force that Özil was.

He would rather drop back and pick up the ball and help with the build-up, something that the German was criticised for not doing for years. That’s why having Ceballos in midfield wasn’t a solution to Arsenal’s problems but even underlined the need for a new strategy and better positioning.

With his tendency to drop deeper, the spaces between the lines increased and the team’s inability to position smartly as a whole affected both their defensive and their attacking performance.

No accurate pressing strategy was applied during defensive transitions; they would easily let the opposition in their own half. Having no structure in midfield allowed too much free space and Ceballos wasn’t accurately contributing to blocking the passing lanes either.

When attacking, the space between midfield and attack was so enormous that their opponents were often able to drop in a low block allowing no free space for movement and stopping Arsenal’s attacks early on.

It was difficult for the team to employ positional play and this made it almost impossible for Ceballos to fit in using his strengths.

His transformation under Arteta

Arteta made a statement with his first days in a head-coach role and made it clear that he wants to see a defined structure, fluidity and motivation. He had clearly analysed the strengths and weaknesses of every single player and also their performance as a whole. And that’s when all the transformation began.

Employing the positional play and working on their positional awareness had an immediate effect since each player was assigned a clear role on the pitch, including Ceballos.

He wasn’t forced to stay up high and be the main deliveryman. By simply changing the formation and splitting the responsibilities Arteta allowed him to do what he does best – pick up the ball and advance it through his strong passing and dribbling skills while receiving support by his teammates who wouldn’t allow gaps to occur.

With the new back-three formation, the Gunners had much better coverage all over the pitch and this improved movement allowed Ceballos to stroll from box to box freely turning into a key part of the team’s set-up. Using short-pass combinations and creativity, combined with the frontline’s movement deeper than usual, the Spaniard had the opportunity to use his ball control and passing range to advance the ball successfully.

He would frequently combine with the defenders while positioned deeper acting as a passing outlet for the build-up and his positioning would be extremely important for opening the passing lanes, especially against teams that apply high press.

He is key for a few of Arsenal’s build-up strategies as shown below. He either provides passing options to the full-backs/wing-backs and allows them to send the ball centrally or is picking up the ball centrally and spreads out (most frequently finding Nicolas Pépé with long balls on the right flank).

Ceballos’ movement and ball progression are also very important for the team’s attacking actions which we examine in the next section.

Contribution to the final third actions

While he often sits back and helps with the build-up, his ball control and speed allow him to quickly reach the edge of the final third and supply the forwards with quality balls. With his 3.03 dribbles and 2.33 progressive runs per 90, he is contributing perfectly to the attacking style of play Arteta tried to implement with his arrival.

His runs and ability to retain possession in the advanced areas has increased Arsenal’s efficiency in front of the goal as he delivers 9.03 final third passes per game. He often occupies the half-spaces and not only uses his movement to drag players out of position but also supports the penalty area actions with 2.38 passes on average.

His spatial awareness and sense for a good through ball often bring Arsenal forward and increase the creativity in the final third. His dribbling and backheeled passing efforts have helped the team in retaining possession and creating opportunities on many occasions.

He doesn’t contribute to the attacking ventures only when he is highly positioned. He uses long balls occasionally in order to bypass the press and send the ball directly to the advanced areas which often allows the attackers to exploit spaces more efficiently and focus better on their actions on the ball.

Another aspect of Ceballos’ game upfront is that he provides options when it comes to attacking set-pieces too. He replaced Özil as the main corner taker, splitting that responsibility with Pépé and he is also occasionally assigned some free-kicks.

He is rarely a direct threat in front of the goal due to his lack of good finishing, but he does shoot from outside the box occasionally, providing additional explosiveness to Arsenal’s attack, although his shots are being blocked by the defenders rather often.

What’s impressive about Ceballos is his balanced-out performance. He realises the responsibilities of his position and has a huge defensive contribution during transitions, especially when it comes to gaining back possession.

With Arteta’s improved pressing strategy, he contributes to pressing high up the pitch and to recovering the ball while still in the opposition half. Most of the time, he recovers the ball through counter-pressing, but he also does 5.1 possession-adjusted interceptions per game which adds to his successful defensive actions.

He dives into 8.24 defensive duels on average which is a solid number for his position, having a higher frequency and similar success rate (57.83%) to Chelsea’s Ngolo Kante.

His contribution with interceptions is what Arsenal needed for a long time since many of their defensive problems were coming from their lack of domination in midfield.

His defensive positioning always aims to close down space and to block the passing lanes, although his timing could be something to improve on in the future. 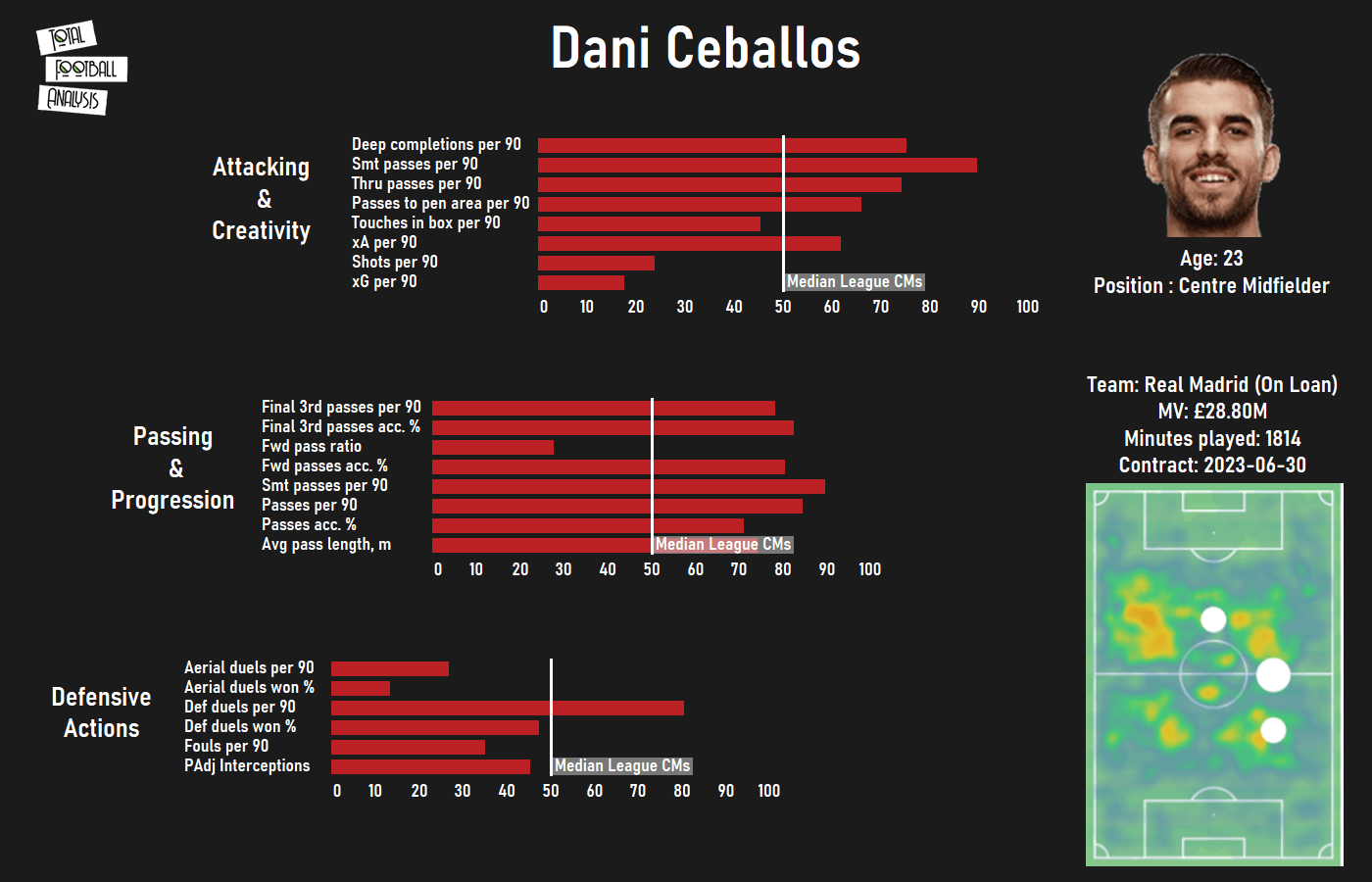 In this last section, we’re going to look into Ceballos’ performance compared to the league average in certain metrics.

As his profile above suggests, the Spainard performs above average when it comes to creativity and delivery to the advanced areas. His smart pass and through ball abilities are underlined by his data performance too. The only indicators in attack that turn out lower than average are, as we already mentioned, his contributions in the box and his shooting.

He excels in his ball progression and passing performing better than the average for that position in the league. His statistics confirm his pass contribution to the final third as well as show that his overall passing accuracy is higher than the average.

As previously explained, his profile also confirms his good performance when it comes to defensive duels and PAdj interceptions. His duel frequency is well above the average, while his interceptions are satisfying enough having in mind his responsibilities.

This analysis showed that Dani Ceballos is a valuable addition to Arsenal’s squad and fits Mikel Arteta’s tactical vision. While they have yet a lot of things to improve on, his presence in the midfield helped the Gunners towards more balanced performance and more accurate actions in all areas.

He performs well in a back-three formation and manages to support both the attacking and the defensive actions equally well. His more of a box-to-box role gives him freedom and space to express his creativity and use his strengths.

His market value moves around the 30 million mark and having in mind that this “partnership” is already tested, Arsenal need to put efforts into signing him for at least another year if not permanently.