Caroline Seger is a 36-year-old midfielder who played for numerous teams throughout her career like Lyon and Paris Saint-Germain. Now, she plays for Rosengård Women and the Swedish national team. Lately, she was able to pull the strings in the Olympic Games to guide her national team to a silver medal after they were defeated by Canada in the final. Her midfield performances attracted a lot of attention from big teams like Bayern Munich and Barcelona as she showed great mastery of her role, while always keeping an eye on what’s surrounding her.

In this tactical analysis article, the focus will be mainly on Seger’s Tokyo Olympics performances while at the same time exploring what she was able to do at the clubs she’s played for. This analysis will tackle her defensive characteristics as a central midfielder, her passing and playmaking skills, as well as her goalscoring abilities.

Seger plays mainly as a central midfielder with defensive and offensive duties even though she is also experienced in playing the defensive midfielder role. The teams she played at, including Sweden, rely on Seger to control the rhythm of passing, decide when to be quick in passing and when to slow down the pace of ball possession. This means that Seger is responsible for launching counter-attacks and for making the build-up successful. 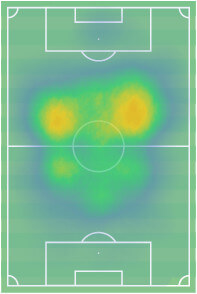 According to her heatmap, Seger covers the whole midfield in her performances and leans heavily towards both the left and right sides, especially when she advances. This helps her in getting close to the attacking players and serving them accurately. Moreover, Seger is responsible for defensive actions in midfield since she often intercepts passes and stops attacking players before they reach the defence.

Even when the ball reaches strikers, Seger has got the experience needed to help fix the situation and prevent the strikers from moving forward or shooting. She did this successfully numerous times and against some tough attacking opponents. Perhaps the most notable and recent example was during Sweden against Australia in the Olympics, when Seger saw Chelsea‘s Sam Kerr getting the ball and intending to shoot from distance. At that point, Seger hurried and put her foot between Kerr’s feet to steal the ball with elegance and without committing a foul after being in a dangerous situation. 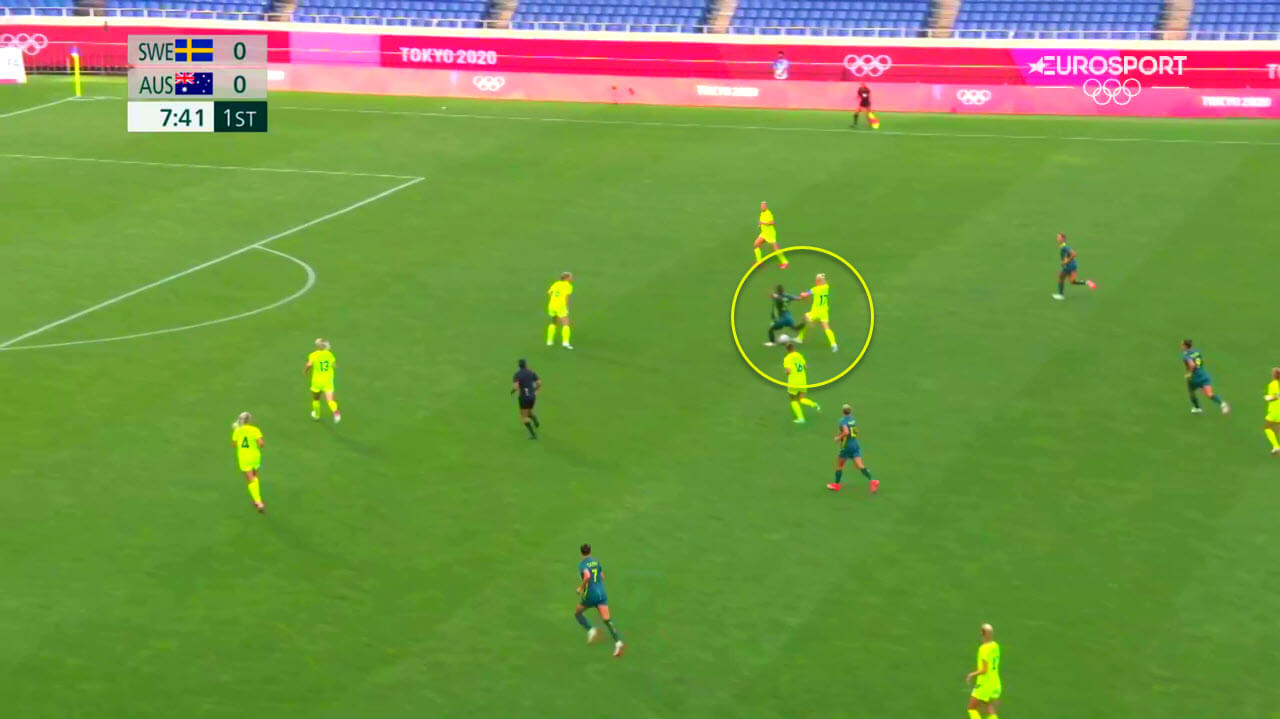 The previous example of Seger’s great reaction and quick defensive decision leads us to explore her defensive traits in more detail. Seger is one of those midfielders who are physically strong and know exactly how to use their bodies in a way that serves their aims. Seger wins 68.8% of her defensive duels per match which is more than a good average. Also, she wins 58.9% of aerial duels which is an important thing for defensive midfielders as it helps in keeping the danger away before reaching a delicate spot. Seger’s ability to impose her body in duels and get hold of the ball is fantastic to watch as she makes it look so effortless even against world-class strikers, like Kerr (yes, once again). 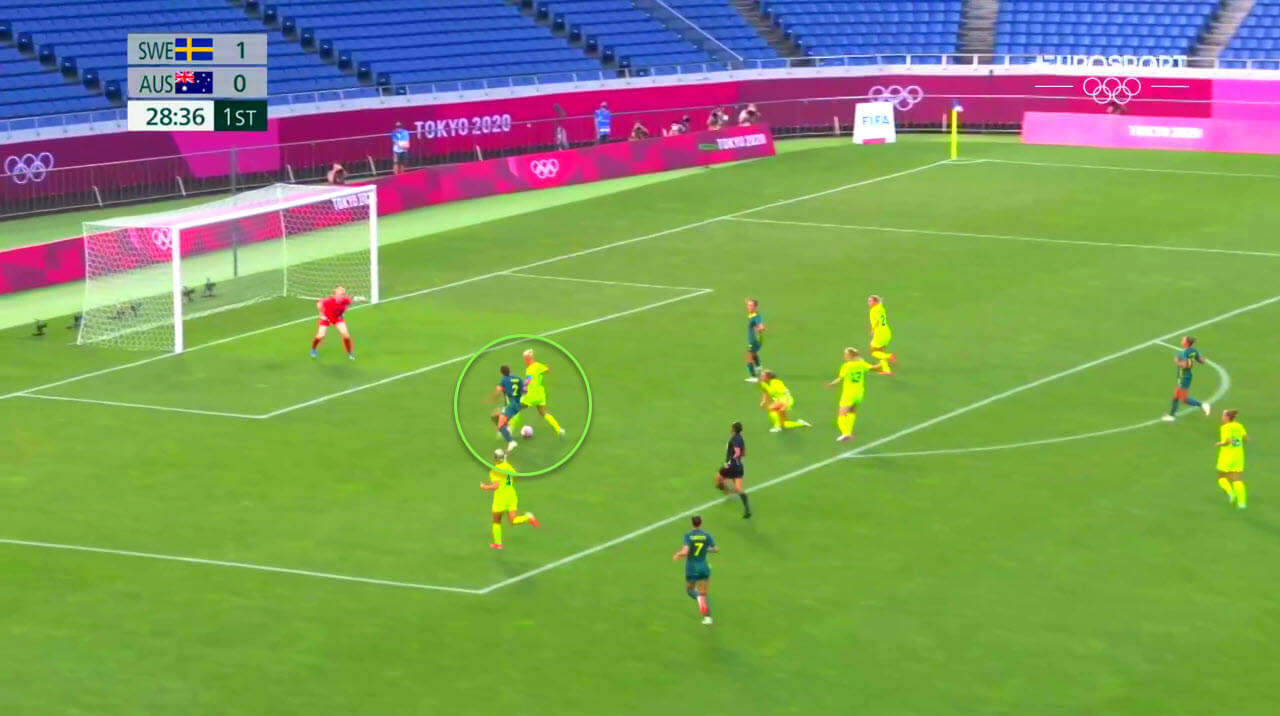 Although she is not an attacking player, Seger usually selects the right timing to press and advances quickly to surprise the ball holder and make her interception. Making such interceptions successfully can only be beneficial for the whole team as it allows them to launch counter-attacks and be in numerical superiority. In this example, Seger spotted the hesitancy of her opponent and the fact that she was going to receive a slow pass, so she ran quickly and was able to steal the ball from her with elegance. 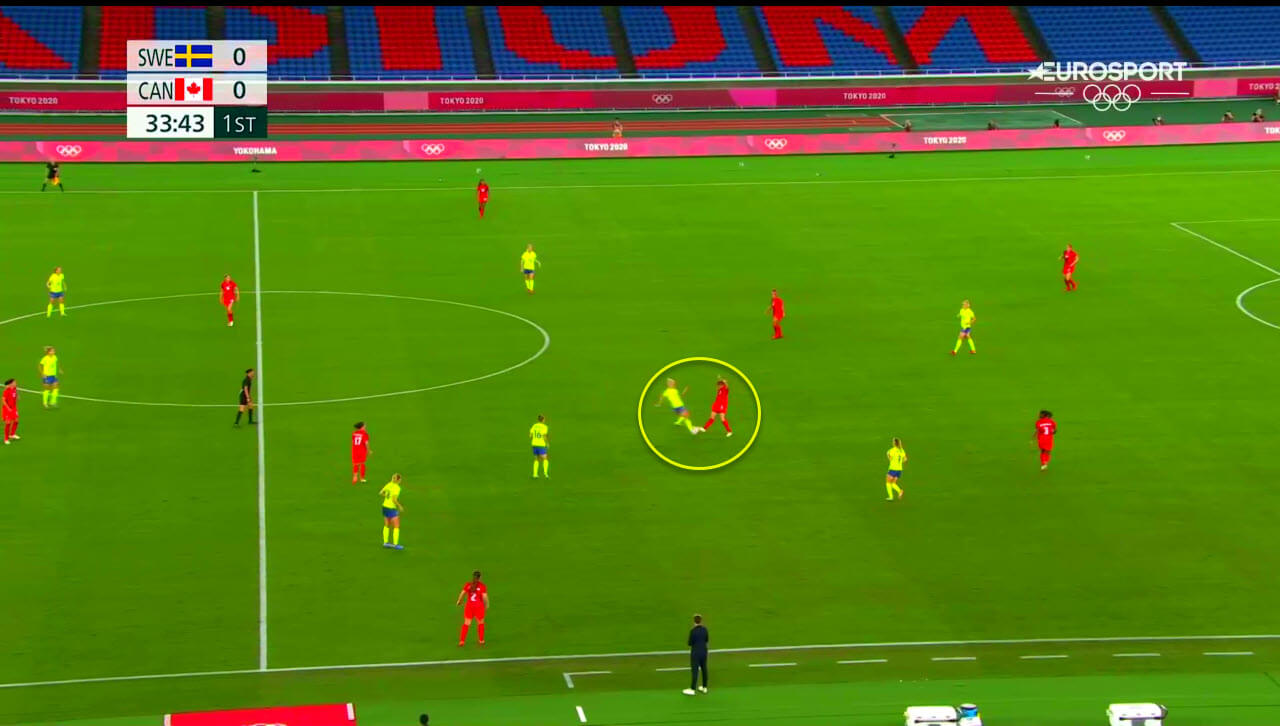 Most defensive midfielders are not necessarily efficient in goalscoring as they are not required to score many goals or advance a lot, but since Seger is also a central midfielder, she has to be a good passer and why not contribute to scoring goals whenever possible. Seger is a good dribbler as she uses her body perfectly to help herself in escaping from opponents’ disturbance. She makes 55.9% successful dribbles per match and this helps her in positioning herself well to give key passes to the attacking players.

Seger often advances to the final third and succeeds in serving her teammates even while she is surrounded by opponents. This leads us to conclude that she doesn’t really get affected by pressing as she knows exactly what she needs to do beforehand. Taking decisions prior to receiving the ball is also one of the factors that allow her to play quickly and avoid being disturbed by opponents. As you can see in the following example, Seger here received the ball while she was surrounded by three players. Yet, she was still able to give an assist to her teammate while making the whole action look effortless. 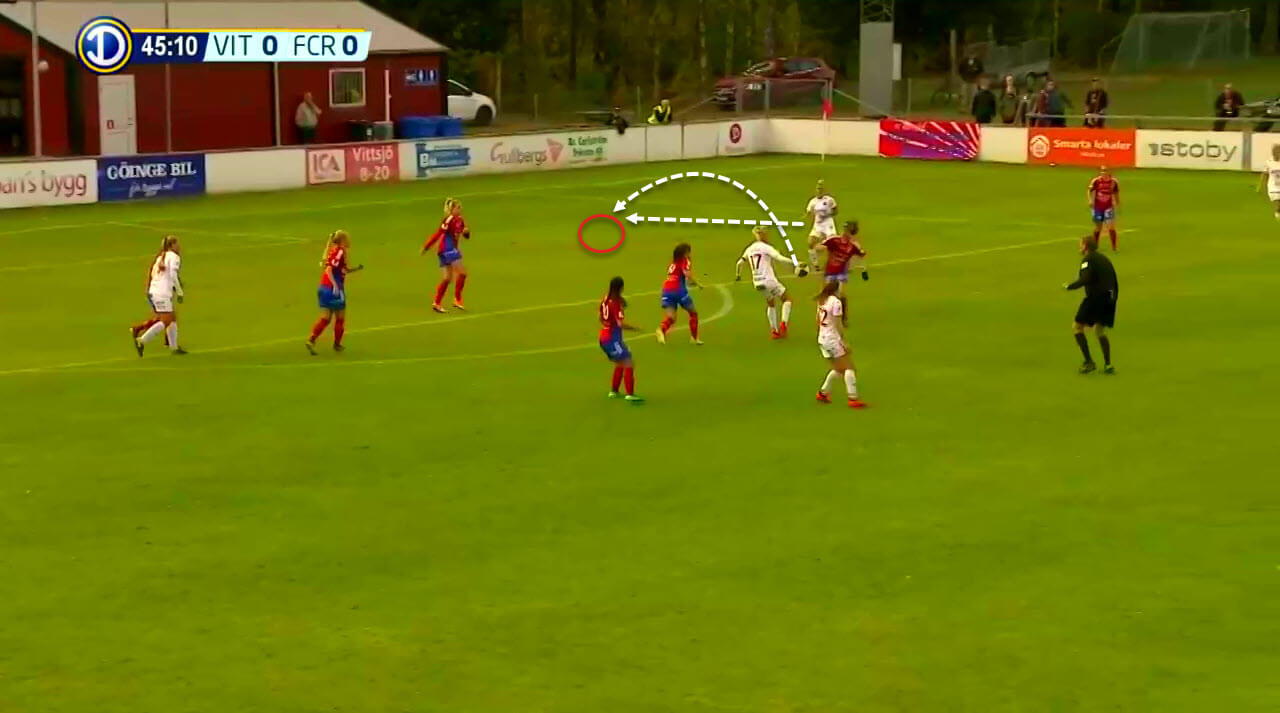 Moreover, Seger plays very well with her weaker foot and uses it intelligently whenever she feels the need to do it, especially for passing. Since Seger is also responsible for switching the ball from side to side and finding space for her teammates, she always waits for the right timing to pass by attracting players to herself before giving through passes, just like she did in this example against Canada while using her left foot. 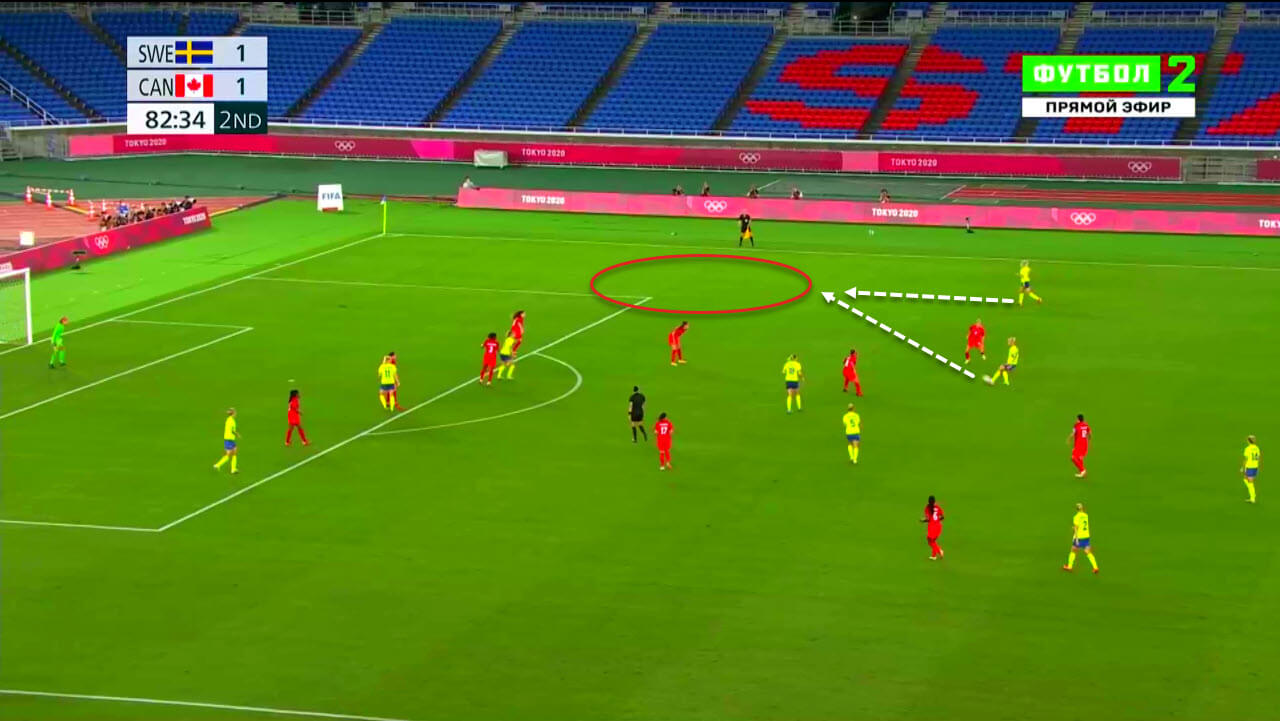 Seger also interprets the advanced playmaker role perfectly throughout the games, as she uses her great passing accuracy and vision to serve the team’s strikers while making sure to do it at the right time. She often uses short but powerful passes between defenders and in the direction of the striker like in the following example. Moreover, Seger also uses long passes almost with the same accuracy and efficiency, which makes her one of the best passers in Europe. 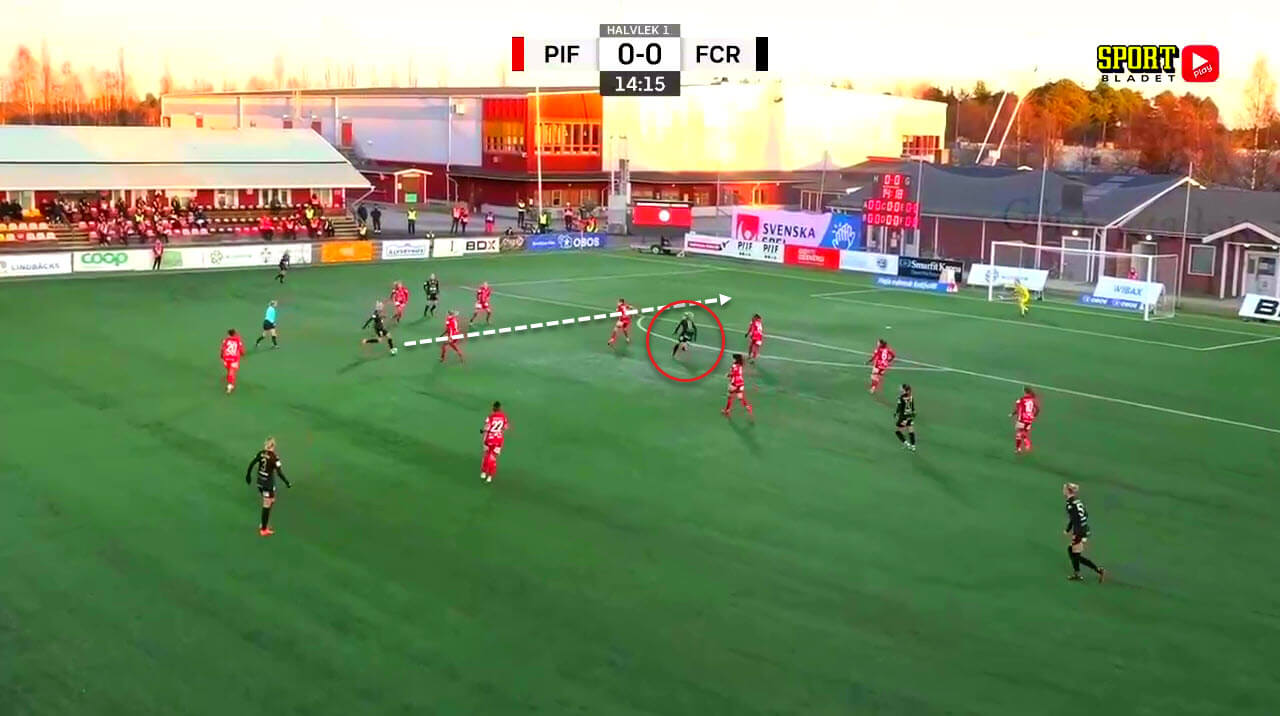 When it comes to goalscoring, Seger is not a player who scores plenty of goals per season given her position and because scoring goals is not one of her primary duties. Nevertheless, the Swedish international proved that she is able to score goals using her right foot, left foot, and head. She often uses her intelligence to position herself in key spots, especially during set-pieces, in order to exploit being unmarked and score. This is exactly what happened during this corner-kick when Seger pretended to be out of the action by staying a bit at the back and on the far post. This enabled her to escape from all the marking and receive the ball in a perfect shooting position. The result was an excellent goal from a Seger’s well-executed half-volley. 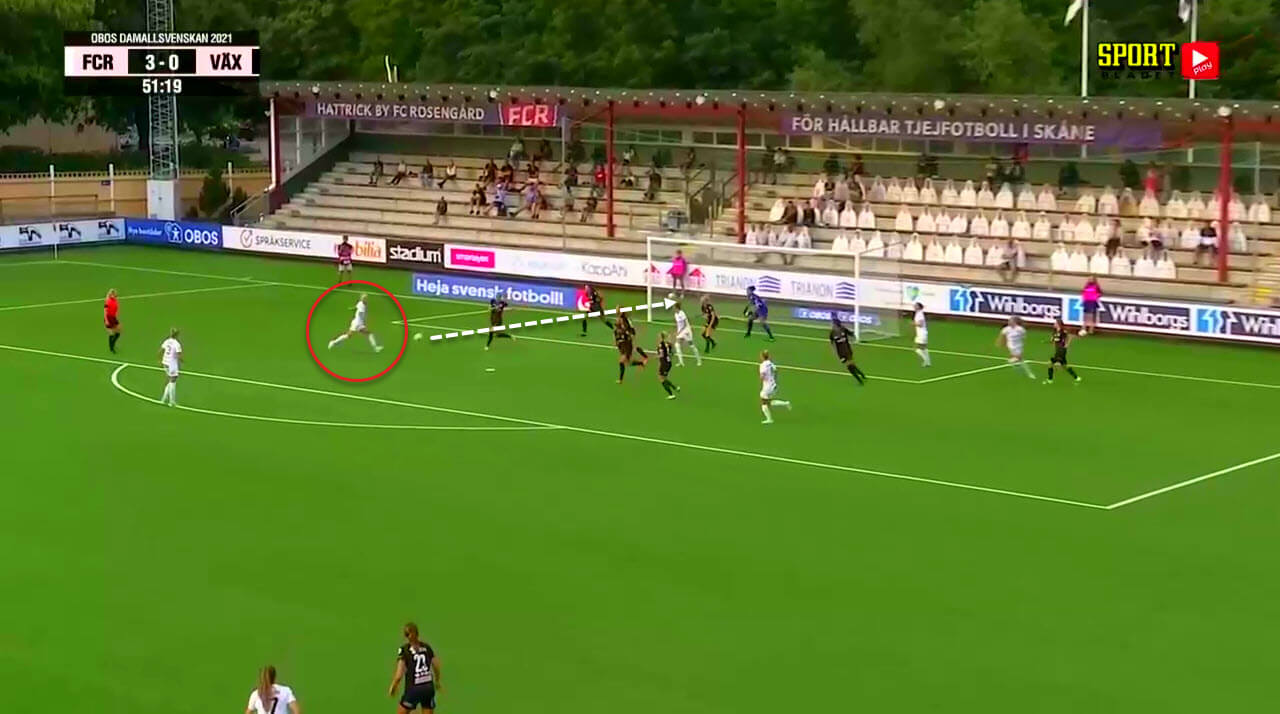 In addition to exploiting set-pieces in an efficient manner, Seger has the personality to show up on big occasions and help her team when it’s urgently needed. It’s true that she doesn’t score so often, but when she does, it occurs in a UEFA Women’s Champions League game at the 92nd minute in foggy weather and with four players in front of her. Yet, all this didn’t prevent Seger from shooting with her weaker foot to put the ball inside the net and confuse the goalkeeper in a beautiful action that saved Rosengård from a loss. 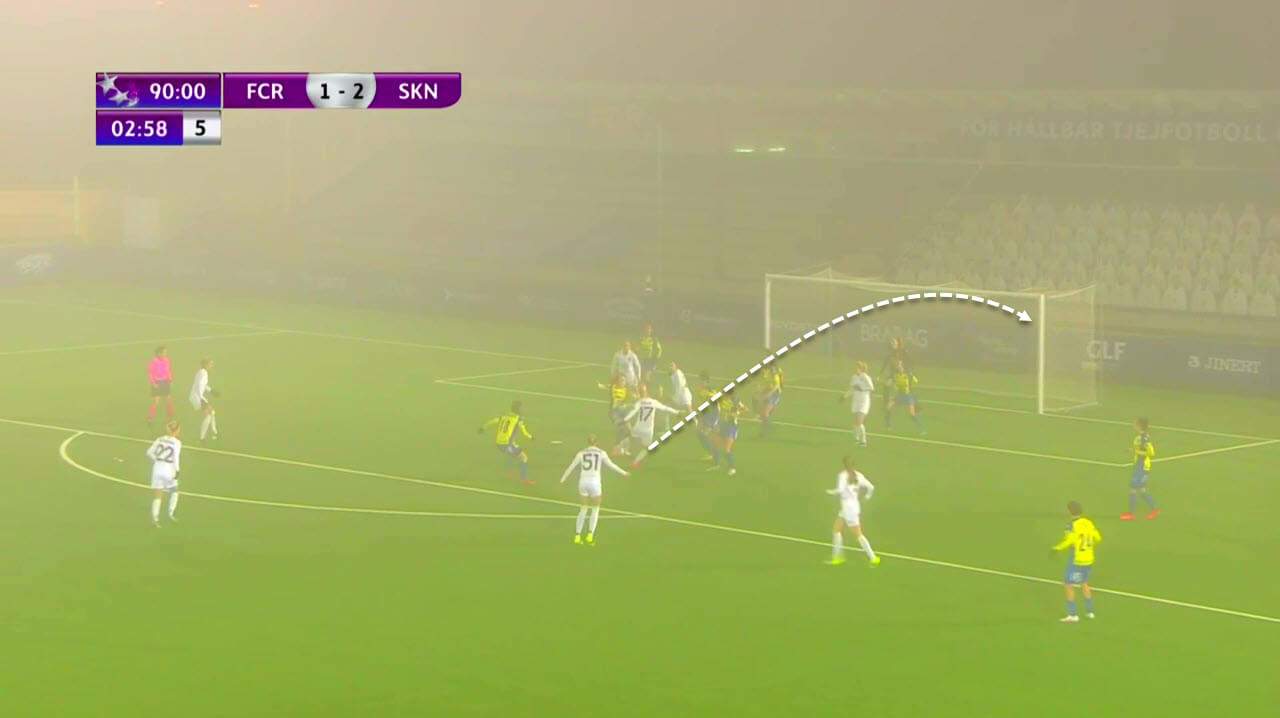 Apart from these shooting skills, she also knows exactly how to deal with situations that need a first-touch shot and has often scored goals out of such situations. Seger curls the ball in a great way when she finds herself in a suitable position to do so. She was able to score goals using this weapon as this type of shot is so difficult to save for goalkeepers, especially if they are well-angled. 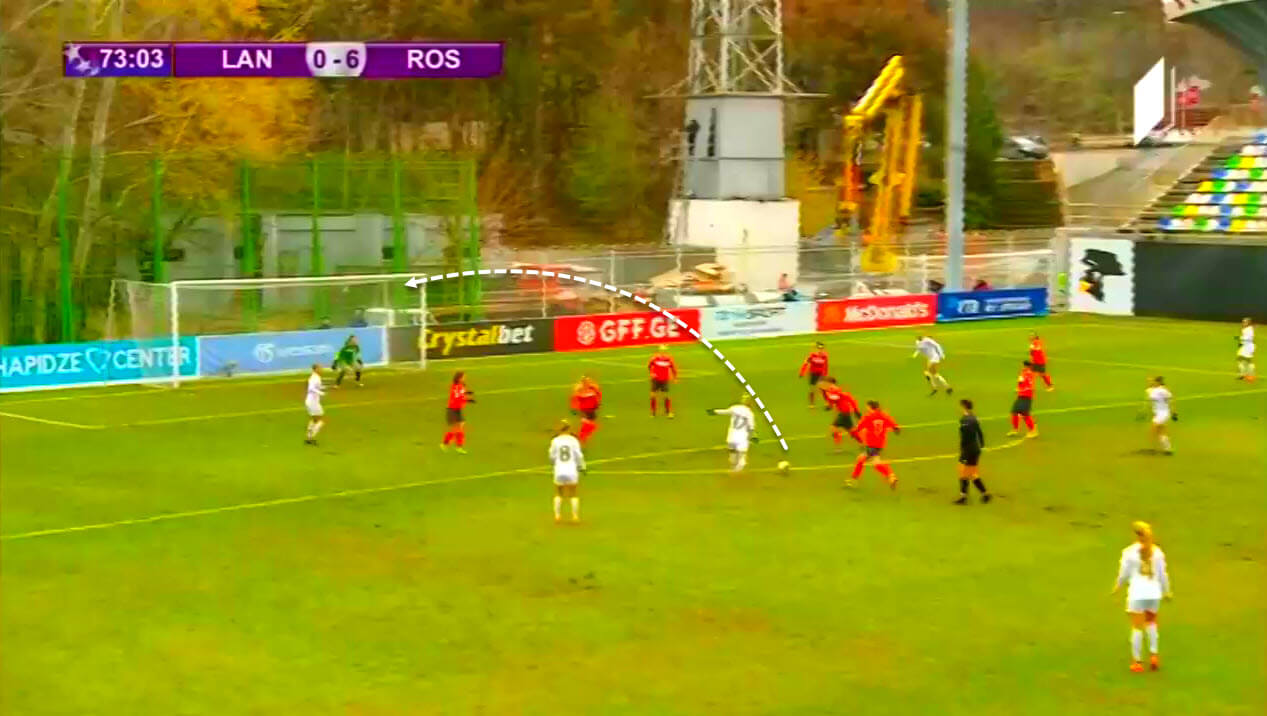 Caroline Seger is one of Sweden’s best players currently, especially in midfield, as she was able to control the midfield during the Olympics while being one of the most senior players on the pitch. Her performances do not have to be linked to age since she was excellent in all aspects during this tournament. She might be in the final seasons of her career, yet she deserves the credit for the entertaining kind of football she provides and hopefully will continue to provide in the next few years.