Magdalena Eriksson is a Swedish defender who joined Chelsea in 2017 and has continuously developed with the Blues after she played for Hammarby, Djurgårdens and then Linköpings, the club at which she played from 2013 to 2017. Chelsea’s Women current captain has been consistent throughout her period with Chelsea and with the Swedish national team as well.

And it is also fair to say that earning the trust and the eligibility of wearing the captain’s armband is not something easy in a big team like Chelsea and requires a lot of consistency in performances, a strong character, and a winning mentality. And not only does Eriksson possess these traits but she also plays in an excellent and creative manner even though she is not a midfielder or striker.

In this tactical analysis written in the form of a scout report, we will discover together why she is considered as one of the best defenders in the FAWSL by exploring her main strengths and carrying out an analysis of her skills and performances.

Eriksson and Millie Bright constitute one of the best defensive duos in FAWSL at the moment in terms of defensive prowess, marking, complementarity and playmaking as well. Both players help extensively in the build-up and also in scoring goals.

This makes them a really powerful duo not only in terms of defending but also in terms of contribution to the attacking phase. Apart from being the captain of the team, Eriksson brings stability in defence through her decisive interceptions and also by covering on her teammates in some instances.

You can see in the example how during this Arsenal attack she went to the left flank to help Chelsea’s left-back in winning the ball back and was successful in doing so. Actions like these often give more stability to the whole team and create more chances and have more confidence.

They are aware that they have a strong defensive line and a captain who usually ensures everything is covered, except in some cases for sure, since no one can be perfect all the time. 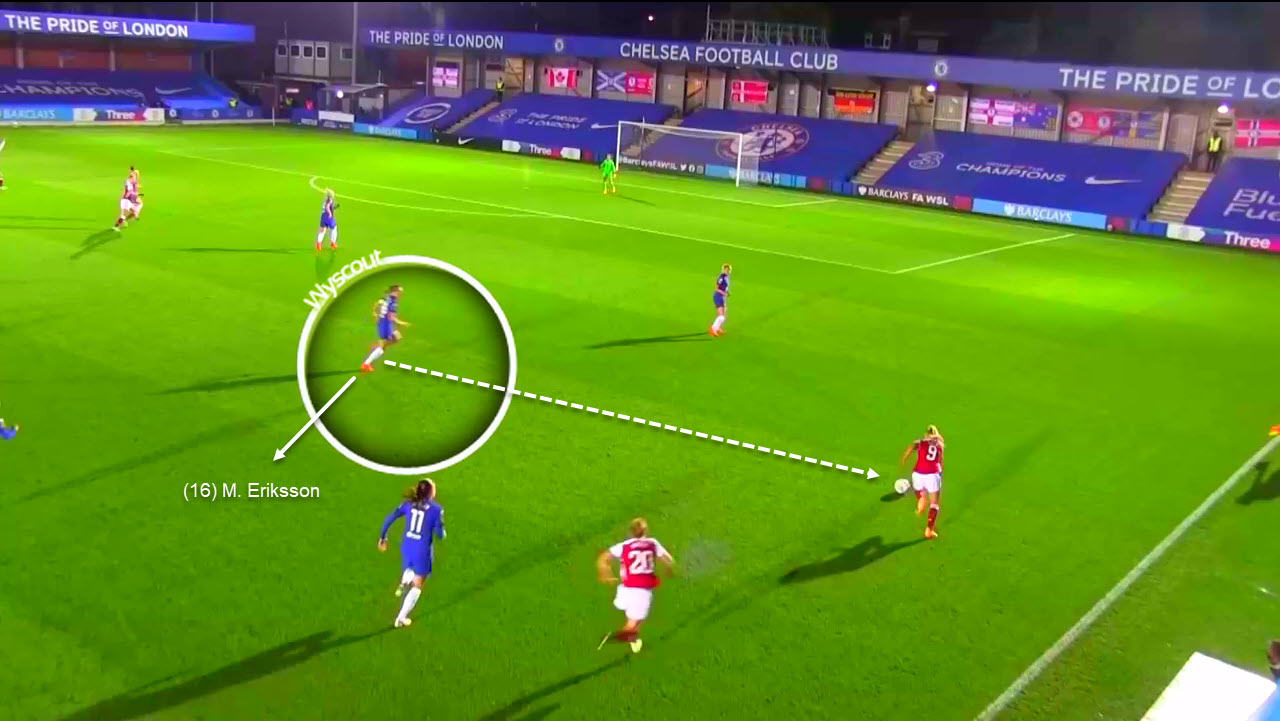 Eriksson is a player who combines between tactical maturity, intelligent decision-making and excellent technical and physical abilities. She is a left-footed player who usually plays as a left centre-back while at some matches she also played as a left-back.

What characterises her is mainly the mental presence and concentration throughout the 90 minutes and the ability to read the game and anticipate her opponents. She is a strong defender who is able to win 71.43% of defensive duels and 75% of aerial duels per 90 minutes. These are two excellent stats that highlight the efficiency of this player at Chelsea.

The efficiency of this player is also represented in her ability to anticipate strikers even when they come from behind and try to surprise her like in the example shown below. In this action Eriksson was brave enough to keep following the ball while covering the ball with her body as soon as she reached it, to prevent the opponent’s striker from taking it and to allow Bright, her teammate, to take it.

This shows not only how she can read the game well but also her ability to help her surrounding teammates especially when needing to win duels. 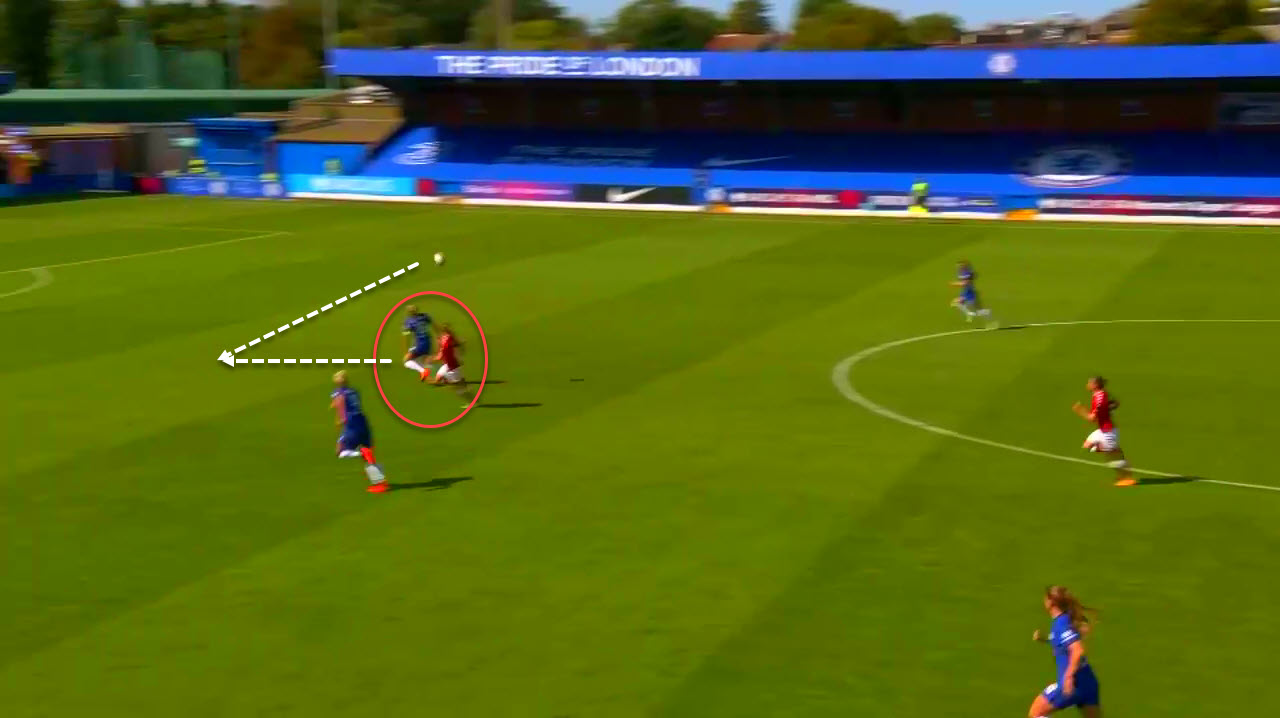 Moreover, when the opponents are in the build-up phase, Eriksson is the type of defender who always tries to anticipate passes and move even to midfield to press on strikers to prevent them from receiving passes. Even when she arrives late, she makes sure to disturb them and either oblige them to make a wrong pass or intercept the ball.

In the following picture, you can see how Eriksson was exactly in the centre of the field disturbing a Manchester City player as soon as she received the ball. When she wasn’t able to intercept the ball, she quickly returned to her position since she knew that a cross will more likely be made rapidly to the players waiting in the penalty area. 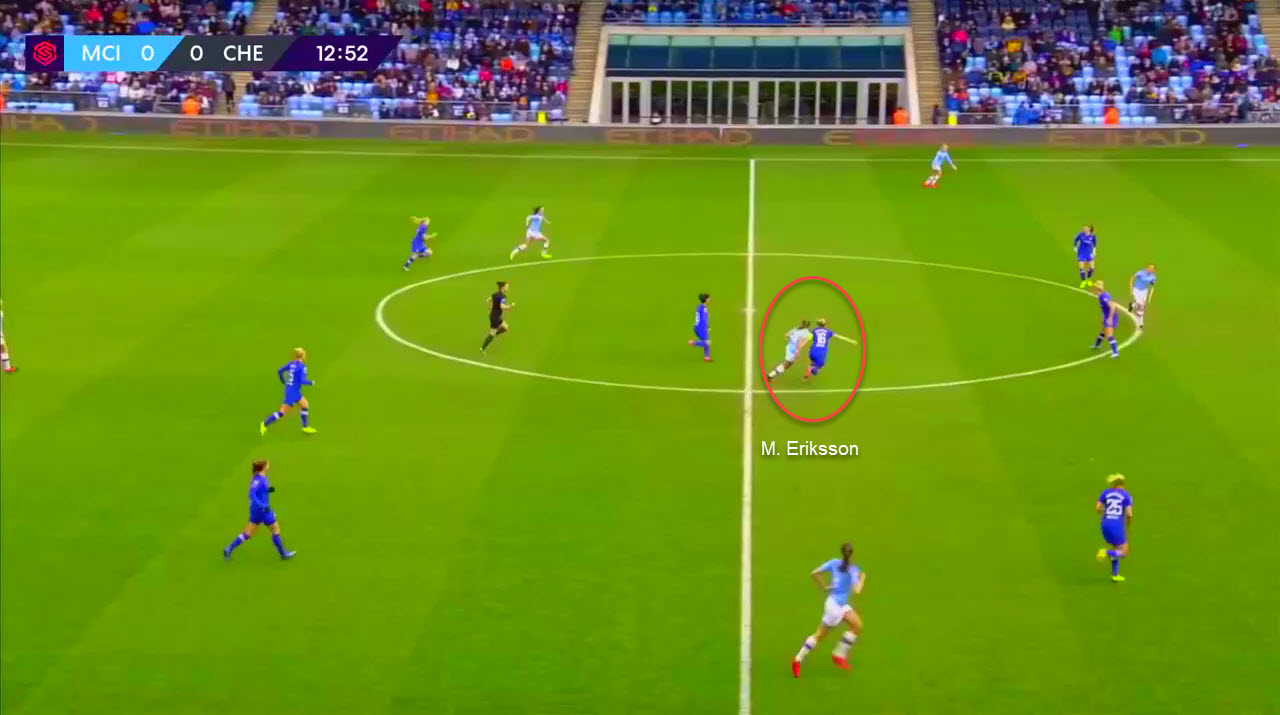 A playmaker from defence

Not all defenders are necessarily good with their feet and some of them do not really have an intelligent vision nor do they have consistent accurate passing. Eriksson is not one of these. She is a very technical player with a great vision and accurate passes and long-passes.

It is maybe sufficient to state that this player has an 87.04% average pass accuracy to realise the talent of Eriksson not only in defending but also in playmaking and building-up from the back.

She often contributes to the team’s attacks with accurate long balls in the back of defence or to the wings. These passes usually create a lot of danger and at times they end up in goals. Just like in the following example, Eriksson exploits her great vision in a very useful way by launching her long-balls.

In this action, for instance, she advanced to midfield, acted like a left-winger and gave an assist to Chelsea’s striker who scored from one touch. This shows that Eriksson is very useful not only in defence but also in creating goal opportunities. 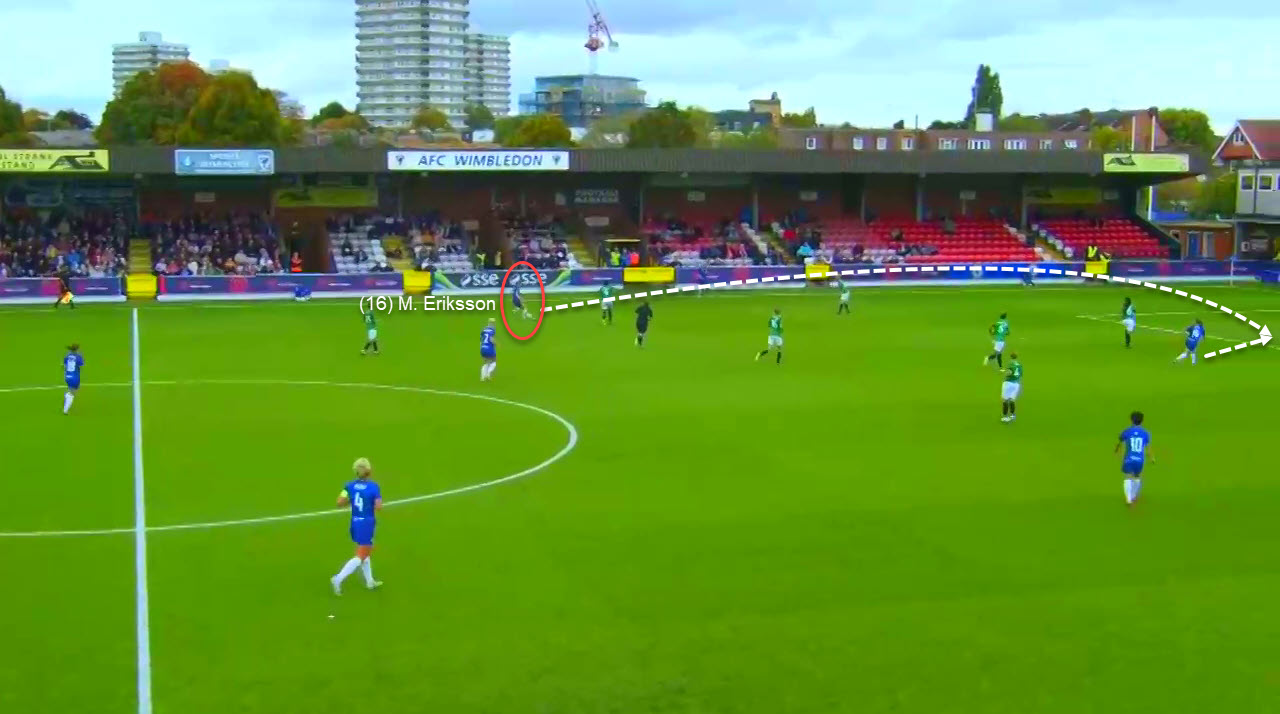 Here once again, Eriksson notices the movement of her teammate without the ball in the final third and decides to launch a long-ball behind the two defenders who were surrounding the Chelsea player. As you can see, it was very accurate and enabled the striker to take it before her opponents and it created a real goal-scoring opportunity with just one long-pass from defence. 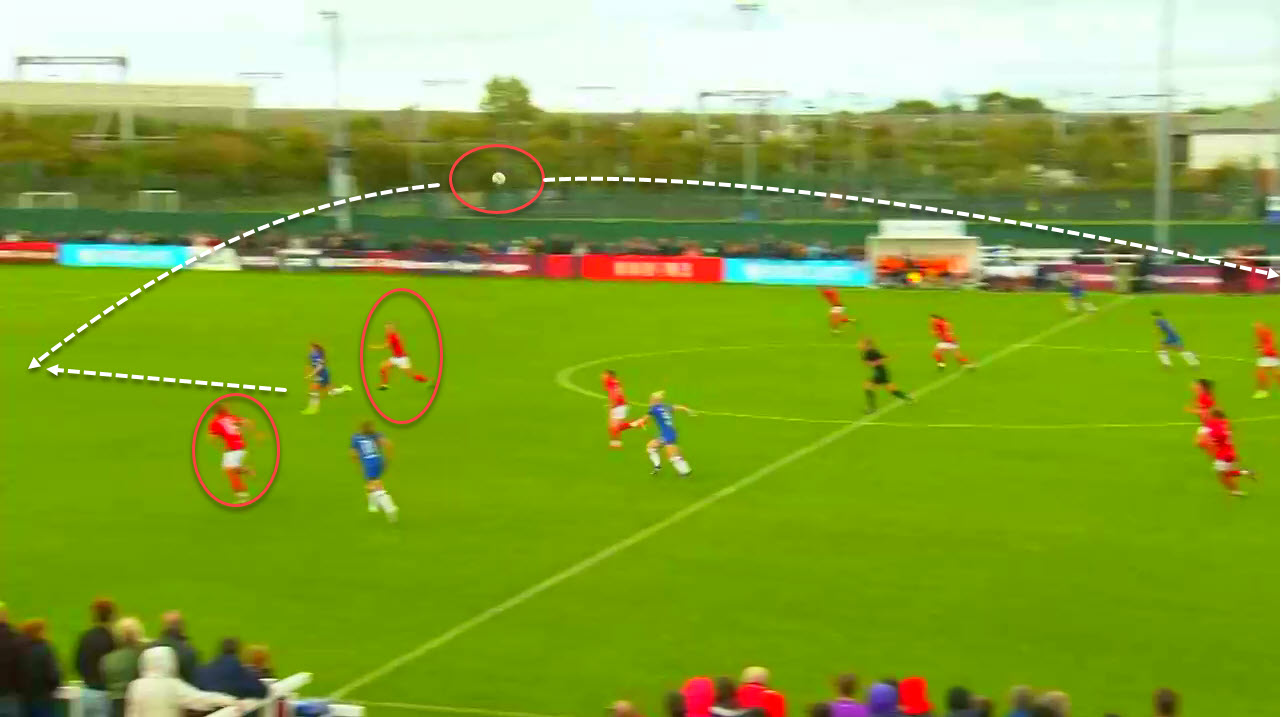 When she happens to move forward to help in scoring goals either on corner-kicks or in free-kicks, Eriksson proved to be a really talented goalscorer who knows how and when to move aerially. More importantly, she knows how to position herself in a place that allows her to touch the ball.

To succeed in this, movement without the ball in these circumstances can be crucial especially when she is marked. What is striking with Eriksson however is her ability to win in most aerial duels in this kind of situation.

In the following example, you can see how she was fixing her direct marker in the box and waiting for the ball to come closer to her. She felt that it is the right time to move forward to escape marking and get the ball freely, she did so and left her marker away and hit the net with a beautiful diving header. 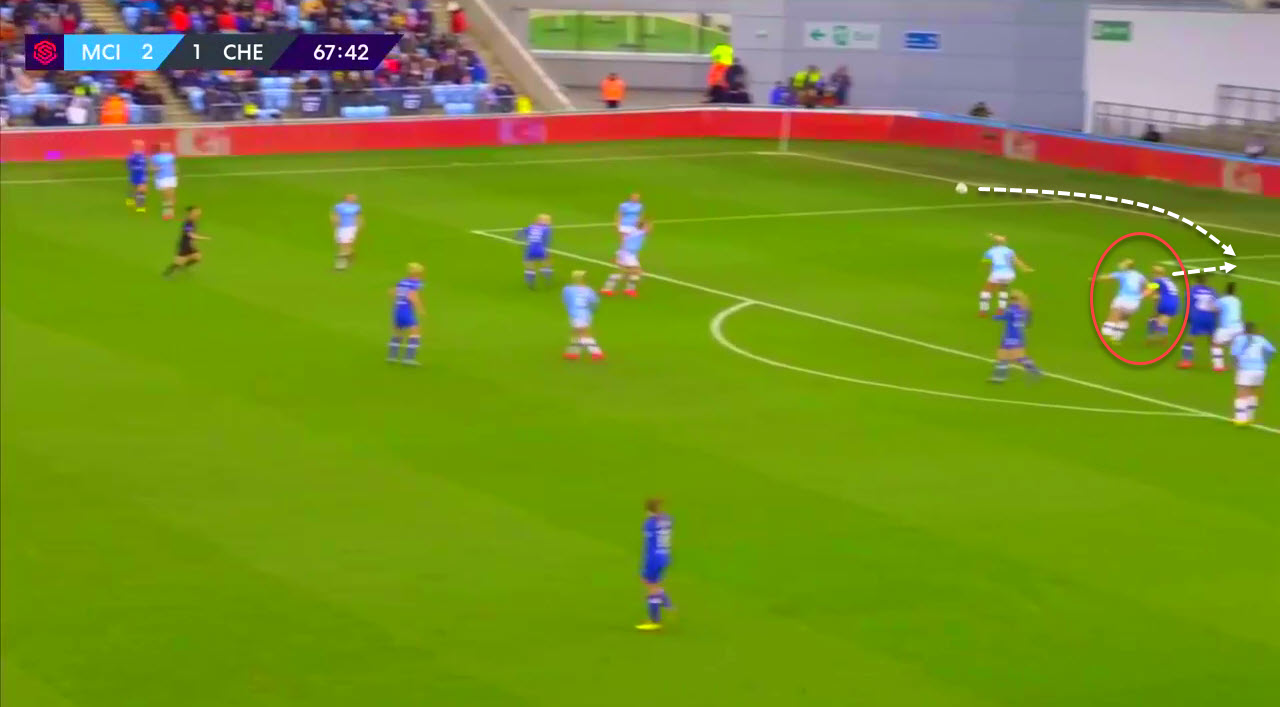 In addition to that, Eriksson knows exactly how to move and how to choose the right timing to jump and kick the ball during corner-kicks and free-kicks. She scored many goals from set-pieces during her time with Chelsea and also with Sweden.

Most of the time she lets defenders chase her teammates who were near her when the ball was not crossed yet, and then when they follow other players she comes from behind and escape her direct marker and move towards the ball to kick it at the right timing. This plan enabled her to score many similar header goals like the one shown below against Arsenal.

She was surrounded by her teammates and three Arsenal defenders were marking them when the ball was crossed. She let everyone move to the centre while she waited for the ball to come and in the last few seconds, escaped from her direct marker and scored. In these cases, most direct markers become aware of Eriksson’s intention only when she jumps and it becomes too late for them to catch her before she scores. 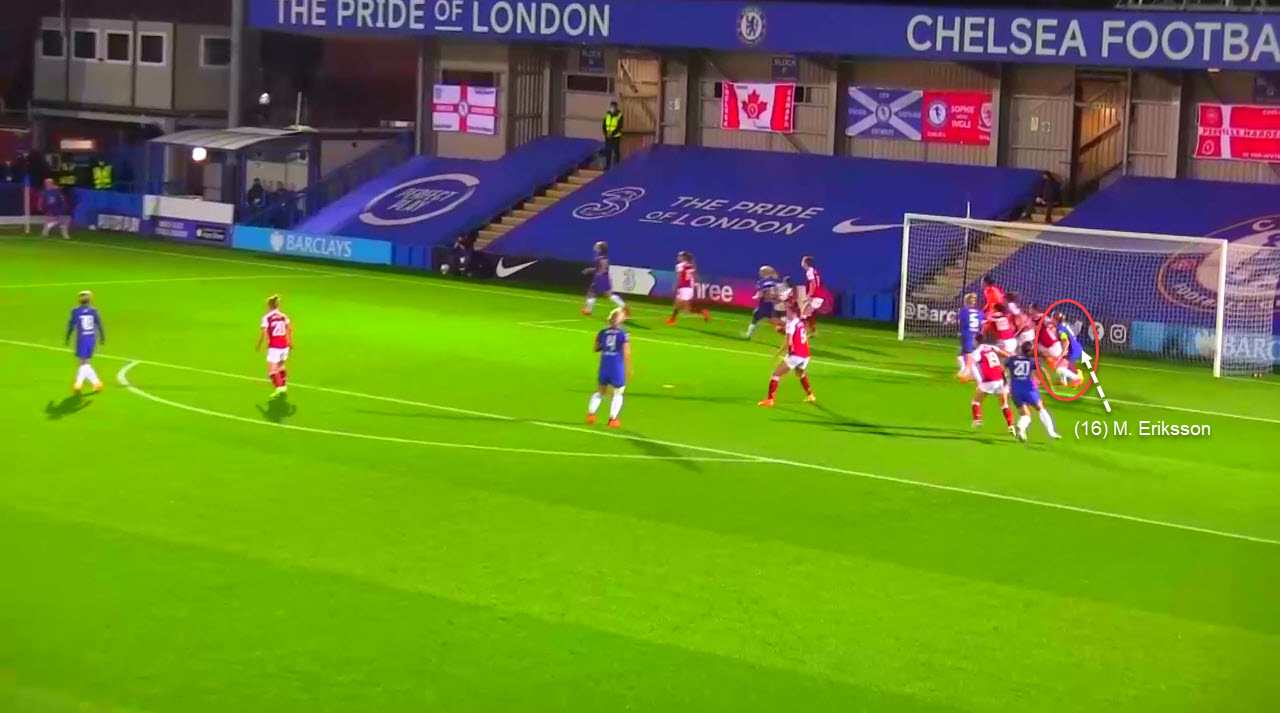 Moreover, apart from her great ability to win aerial duels, Eriksson can also use her feet in a creative way inside the box especially when receiving passes that are difficult to control. For instance, in this match against Liverpool, she received a pass from her teammate while she was not ready for it.

Instead of getting confused and losing the ball, she controlled it instinctively and made a well-executed bicycle-kick that went into the back of the net. Not all defenders can do this sort of acrobatic moves, especially when surrounded by opposition players. 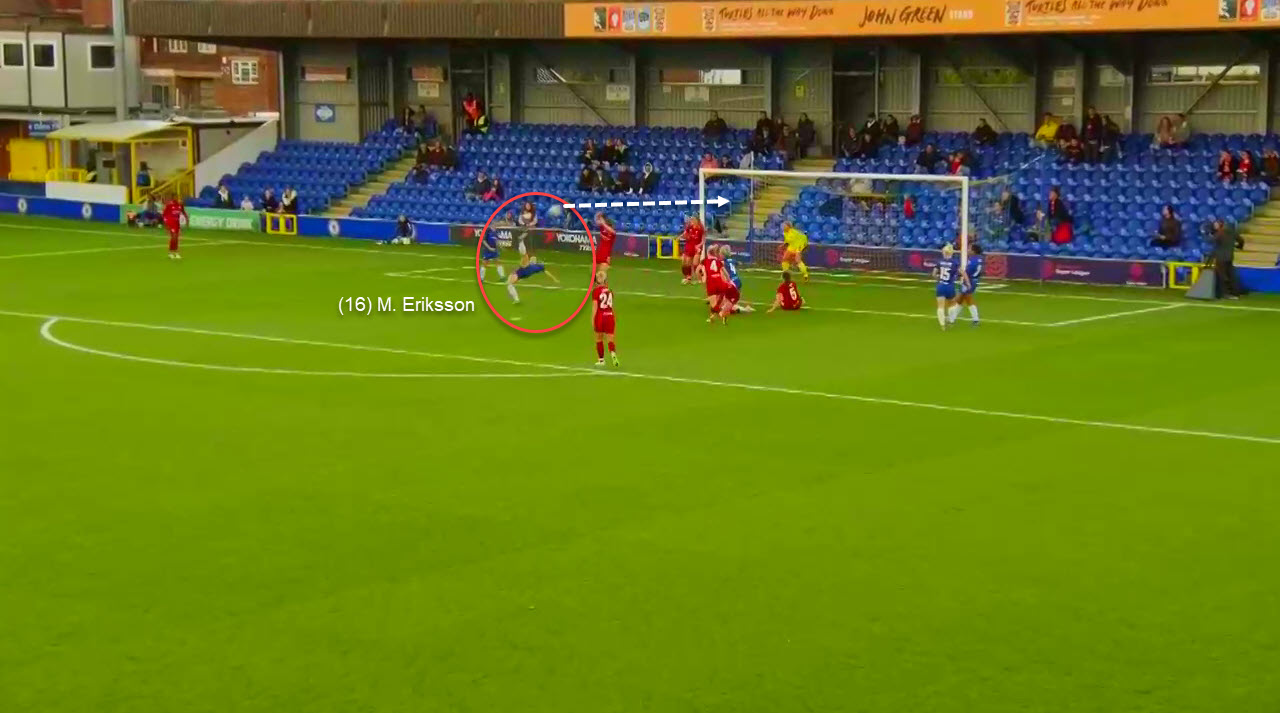 Magdalena Eriksson is one of the best defenders in Europe at the moment but unfortunately, she does not receive the credit that she deserves. Of course, she makes mistakes as any player does, but for the current Chelsea team, the Swedish international is a very fundamental player for the team’s tactics on all aspects.

Therefore, it is really important that the club continues in building a stronger squad around the likes of Eriksson to be able to win some more important trophies like the UEFA Women’s Champions League in the near future.