Calvin Ramsay is a Scottish right-back who plays for Aberdeen. This scout report will contain a tactical analysis of Ramsay’s attributes and playing style. Aberdeen mostly plays 4-2-3-1 or 4-3-3, meaning that Ramsay plays as a right-back in the back four.

Ramsay is a part of the Scotland U21 squad and this is his first season as an Aberdeen first-team player after being promoted from the reserve squad permanently. This season, his performances have caught the eye of numerous English Premier League clubs and, reportedly, there were scouts from Manchester United, Leicester City, West Ham, Everton and Southampton monitoring him closely. Through this analysis, we will see why Ramsay intrigues the EPL clubs, but also see the areas where he needs developing.

Calvin Ramsay is an 18-year-old (born in 2003.) right-back who is capable of playing as a wide midfielder as well, while at youth level, he started as a central midfielder. He is predominantly right-footed and he is around 183cm tall. The visual will show us how Ramsay looks compared to the other full-backs with at least 500 minutes in the last calendar year in the Scottish Premiership. 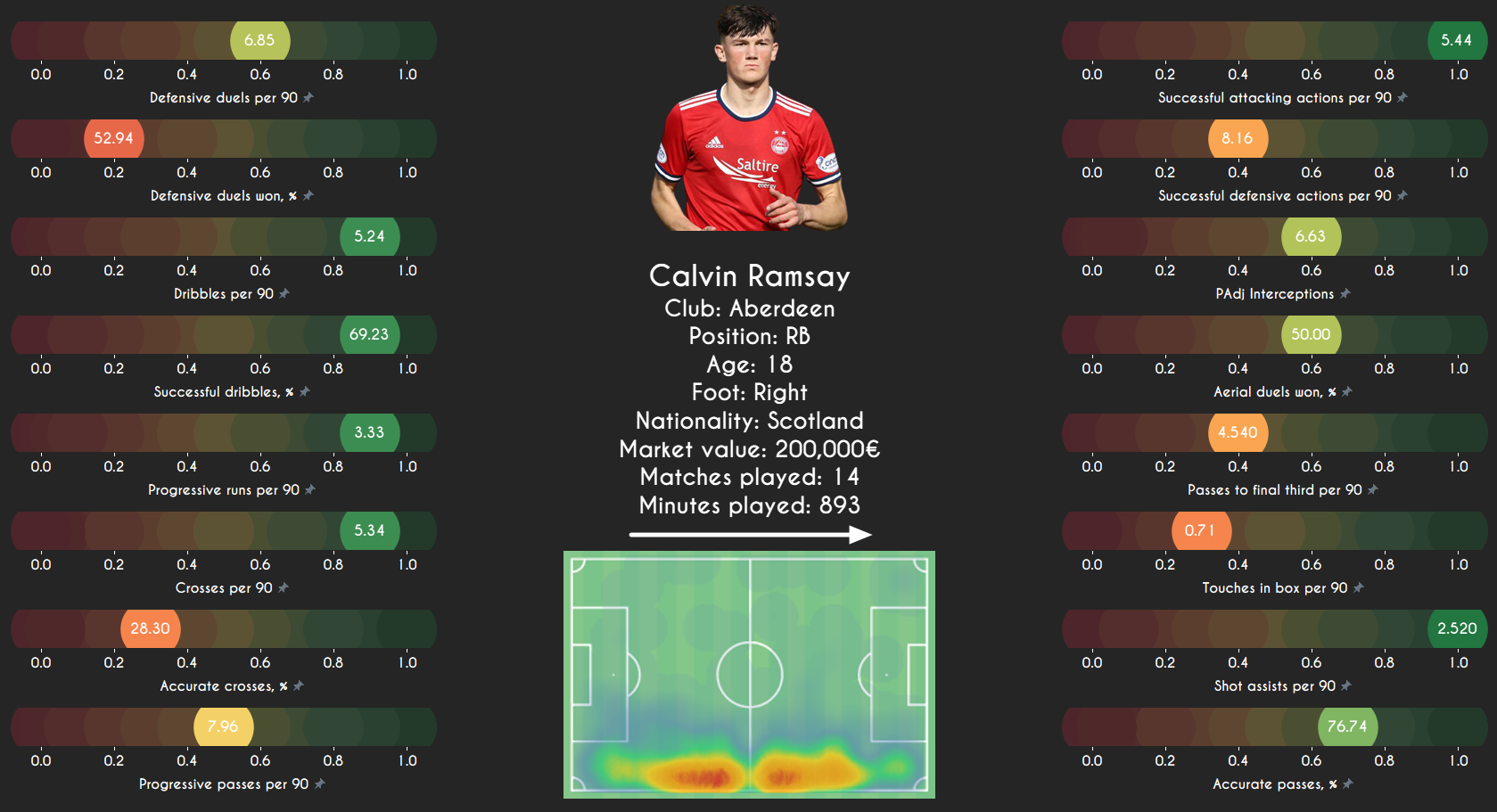 Based on the visual above, Ramsay looks very good offensively and shows high potential in that area.

We can see that Ramsay has high effectiveness in dribbles while he tries a lot of dribbles per 90 which is a very good indicator of his 1v1s offensively. He is also a quality ball carrier which we can see on his progressive runs output. On the other side in defensive duels, Ramsay is below average compared to the other full-backs in the league, which is an area where he needs improvement. He is a volume crosser and his accuracy is okay based on the number of attempts he has per 90, but he has room to improve his crossing accuracy. Ramsay is a set-piece specialist and often creates promising chances with his crosses which surely impacts his shot assists number where he is at top of the league. His passing ability is around average compared to the league’s full-backs, but still, he shows promising numbers and composure under pressure with quality to bypass pressing. His aerial ability is good and given his frame, he will bring it to an even higher level with senior match experience.

In the next sections, we will make a detailed analysis of his playing style and his strengths.

It is not common to talk first about full-backs’ offensive qualities, but it is the reason why Ramsay has gotten attention from bigger clubs. He attempts a lot of crosses and is capable of delivering them from different positions. Through this section, we will go through his crossing positions and some passing & movement sequences. 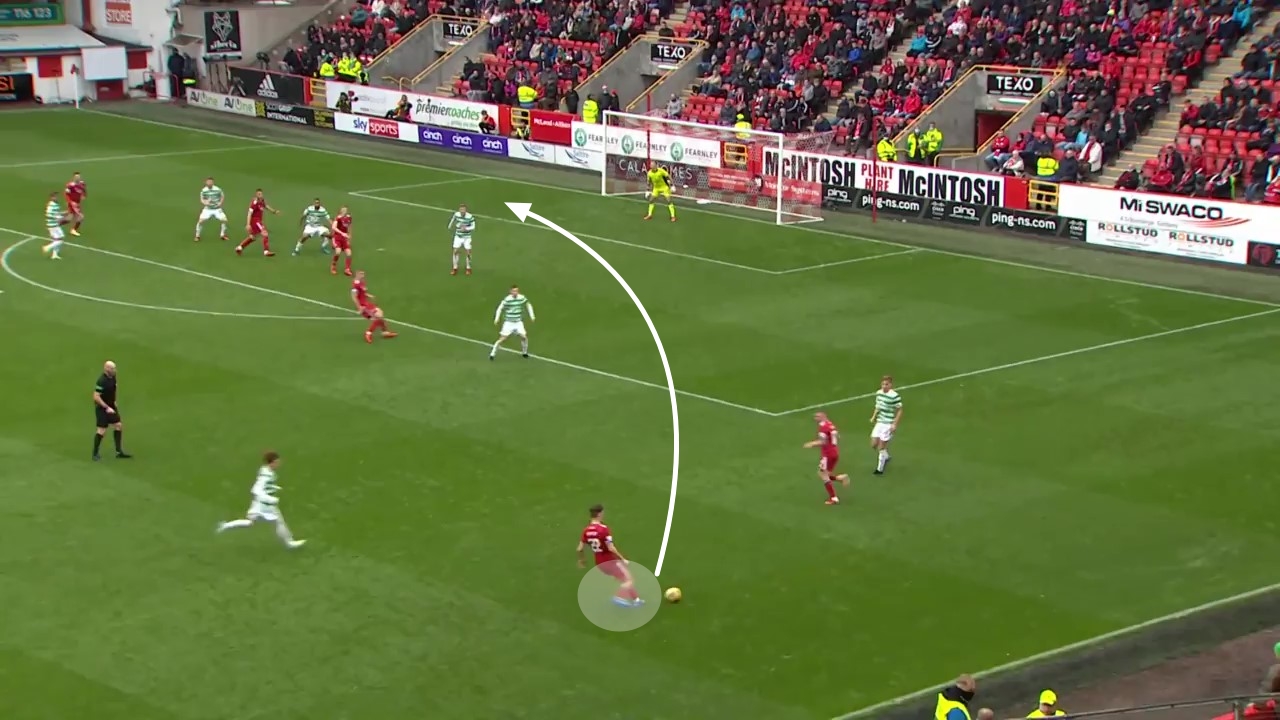 In this image, we can see a situation where Ramsay received the back pass from the winger. Ramsay smartly positioned himself to be a safe passing option for the winger while still covering the wingers back if he loses the ball. At the moment the pass was played to him, Ramsey looks into the area and sees multiple teammates there which triggers him to deliver the cross into the area. This is something which we often see from Liverpool star Trent Alexander-Arnold, who likes to attempt crosses from this position. Ramsey crossing technique from this position is very good and he regularly finds centre-forwards in the penalty area. 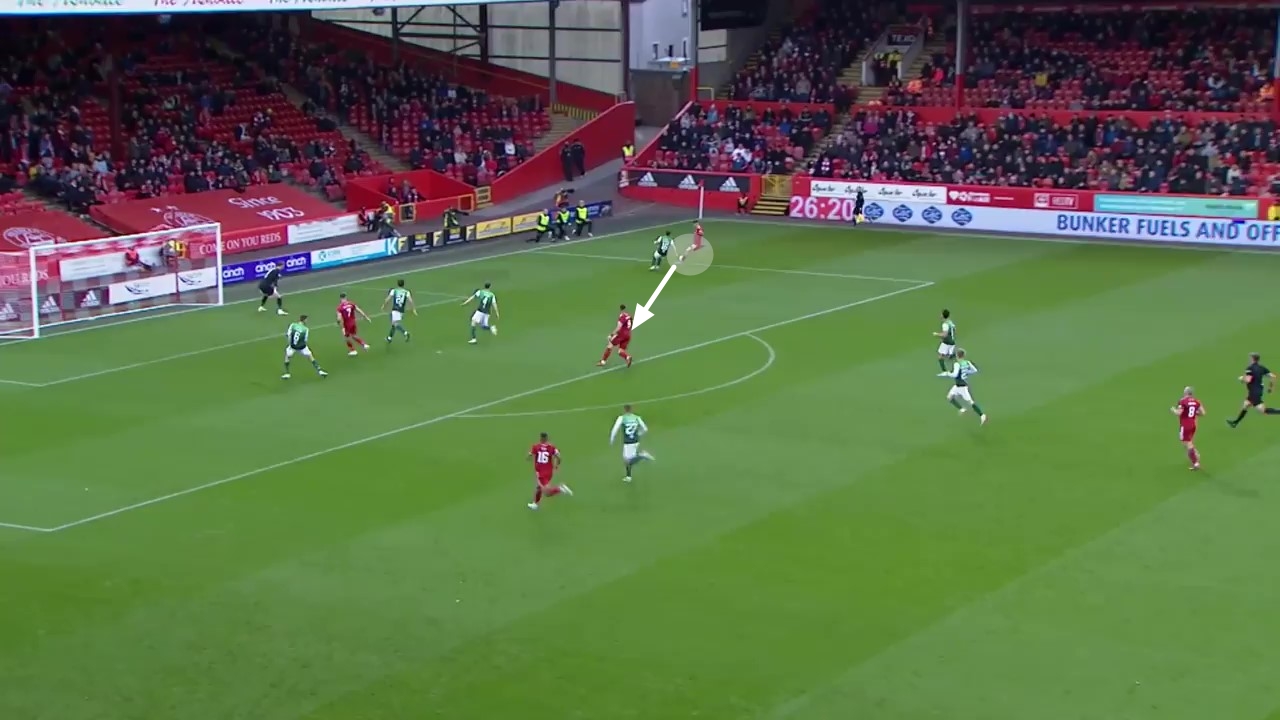 The second example shows us the situation where Ramsay got deep into the opposition’s final third. Rather than trying to cross over the block towards the teammate at the verge of the 6-yard box who is surrounded by three opposition players, he sees a teammate who is on top of the penalty area unmarked. Ramsay makes a cutback pass towards the available teammate who has enough time & space to shoot the ball into the back of the net. His ability to see a teammate and make a very good cutback pass while running at the speed is a top sequence by the youngster. 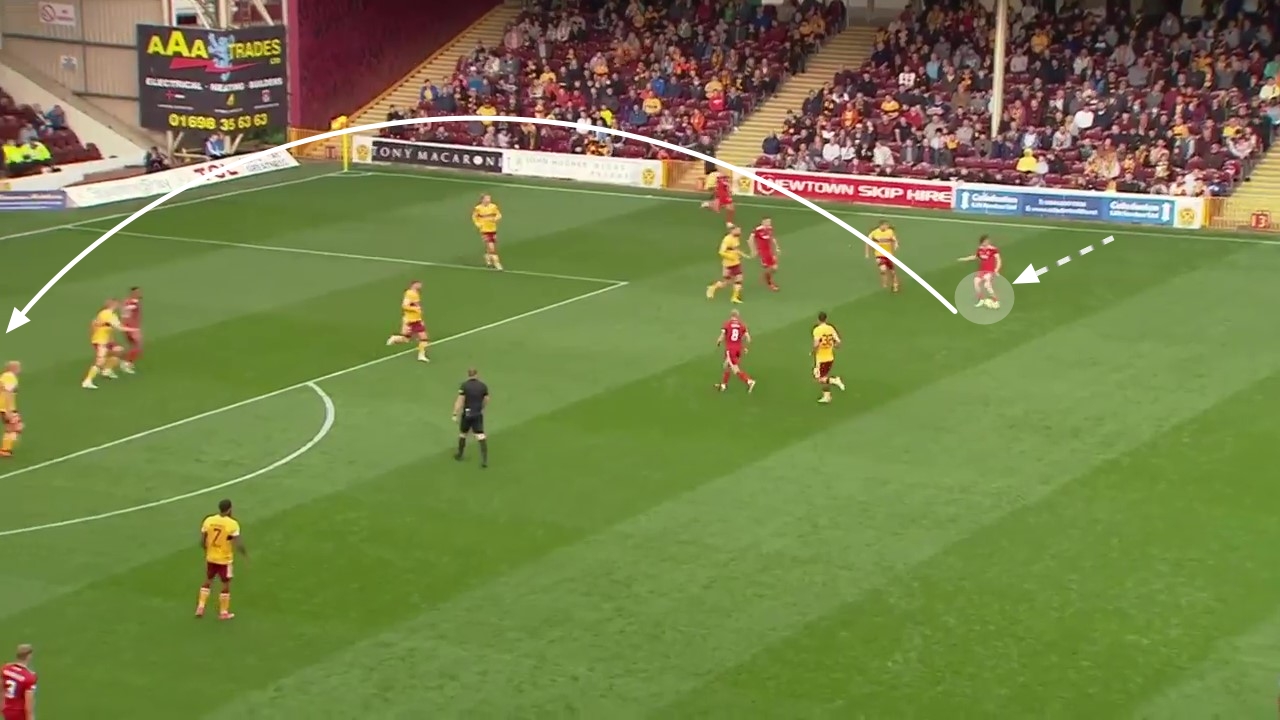 Ramsay has the ability to put the opponent on the wrong foot and cut inside from the touchline with the ball. In the image, we can see him creating himself space for a cross or a pass inside. This part of his game highlights his weaker foot ability, which is still raw, but will be developed over time if we judge based on his willingness to use his weaker foot regularly even when taking advanced actions. 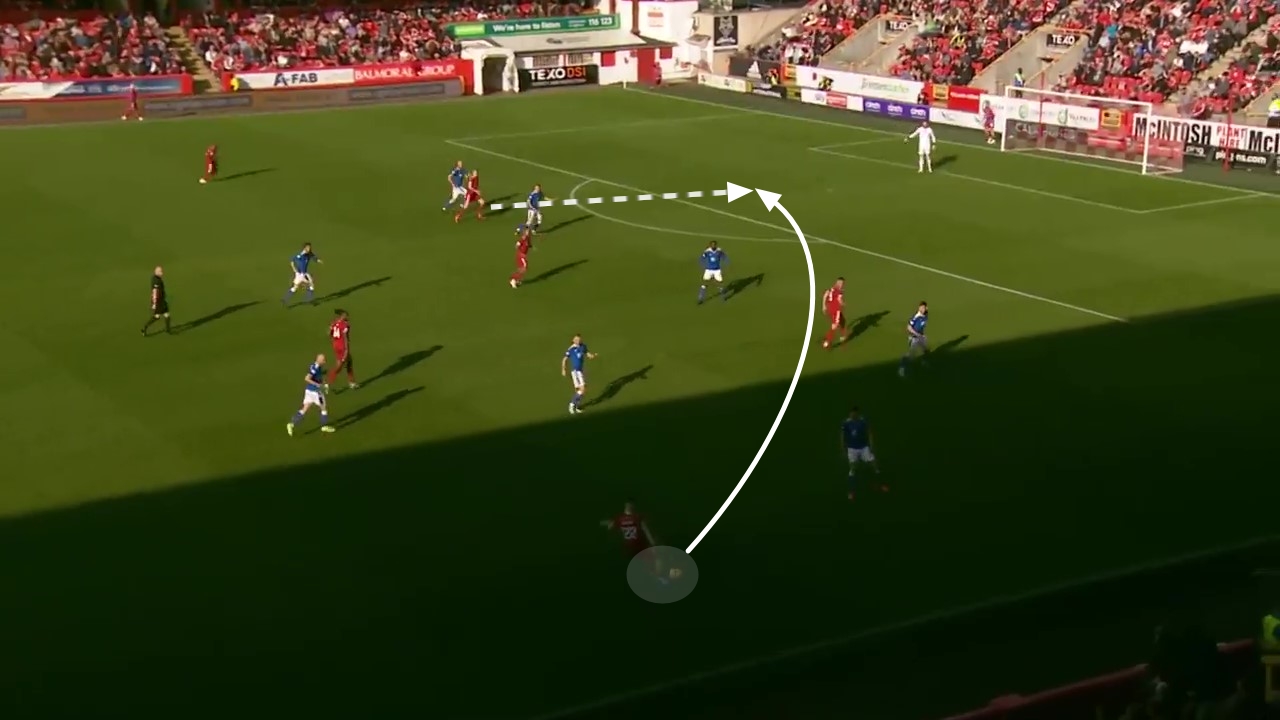 This situation shows his deep playmaking skills. Again something that Alexander-Arnold does on a constant basis. Ramsay, after receiving the pass wide just outside the final third, looks up and sees the space behind the defence where his centre-forward could receive the ball in the promising situation. He has enough quality to find teammates behind the defence and a positive sign is his vision and timing in these situations. Ramsay doesn’t hesitate over making a decisive pass. However, sometimes he overlooks available teammates in the halfspace because he tends to deliver the ball into the penalty area, which shares some potential room to improve, by bringing balance into decision making. 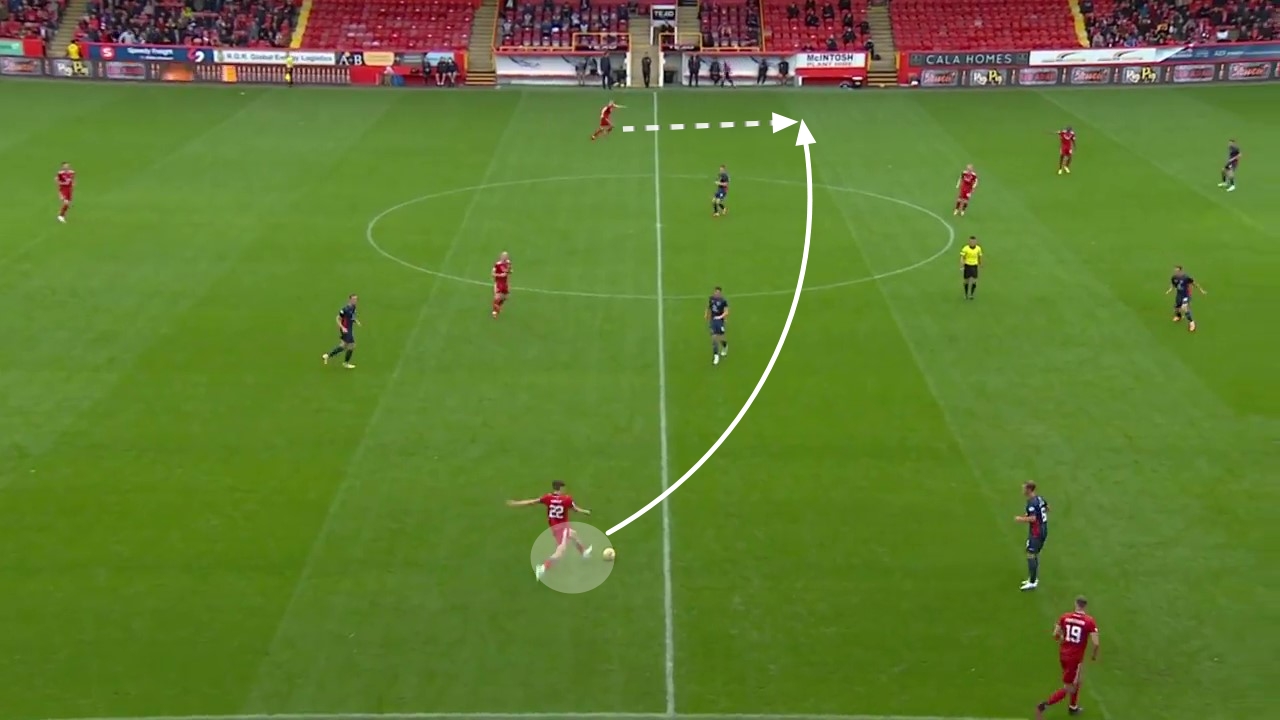 For a full-back with a quality kicking technique, he must have the ability to switch the side of play effectively. Ramsay has a good long pass direction and weight which can instantly put the receiver into an advantageous situation. In this sequence, he hits a perfect long pass towards the left-back into the open space in front of him which creates a 2v1 situation on the left flank. 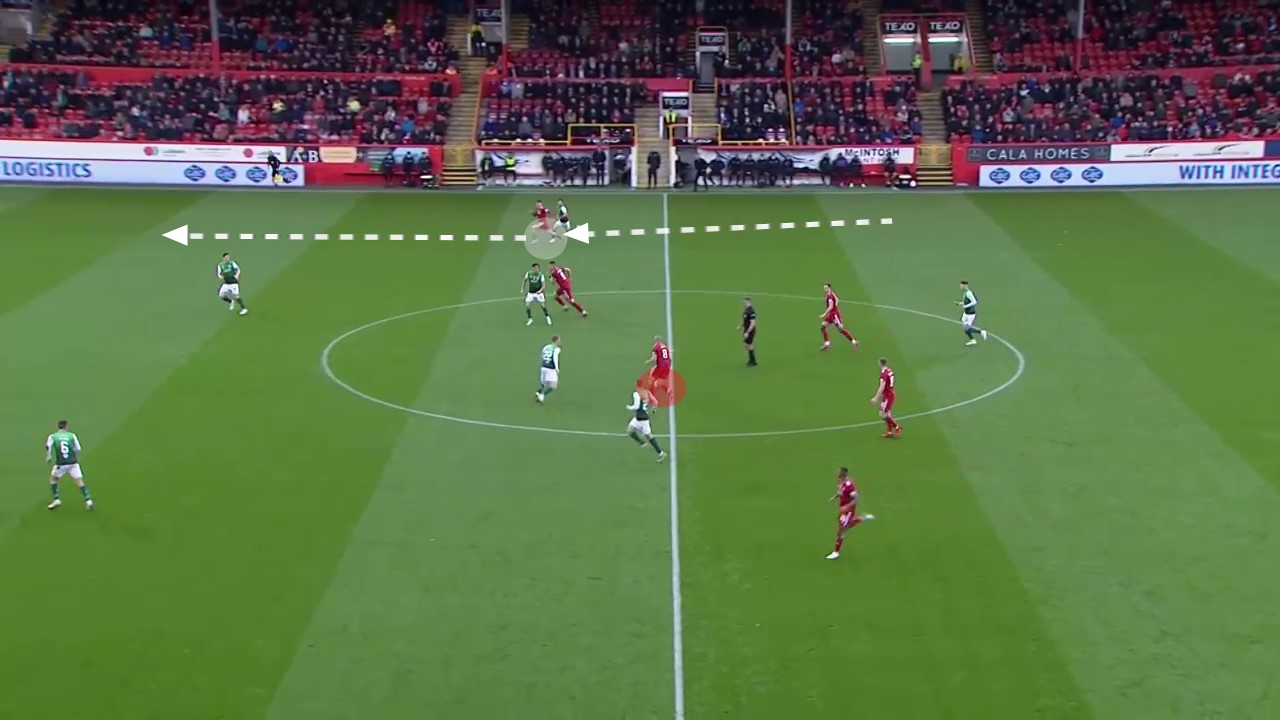 The last sequence of this section is the beginning of the already shown sequence above, where Ramsay made a cutback assist for a goal. This situation perfectly describes Ramsay tendency to join the attack as quickly as possible. Ramsay caught the opposition left-back out of position and attacked the space behind him at full pace. In the wide area, it is hard to catch Ramsay and his teammate made a quality pass which put Ramsay in a promising situation from which he assisted for a goal.

In this section, we saw a lot of situations in which Ramsay can make an impact offensively, and he has an extensive offensive skillset for a full-back. 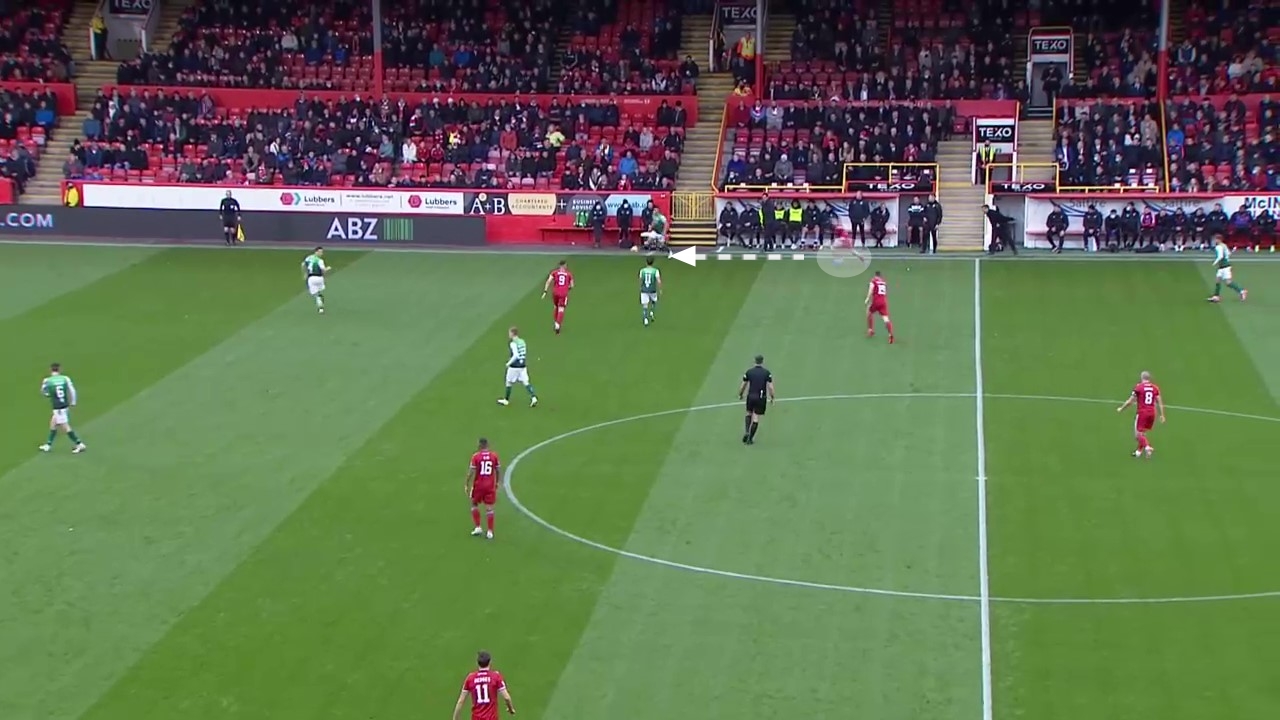 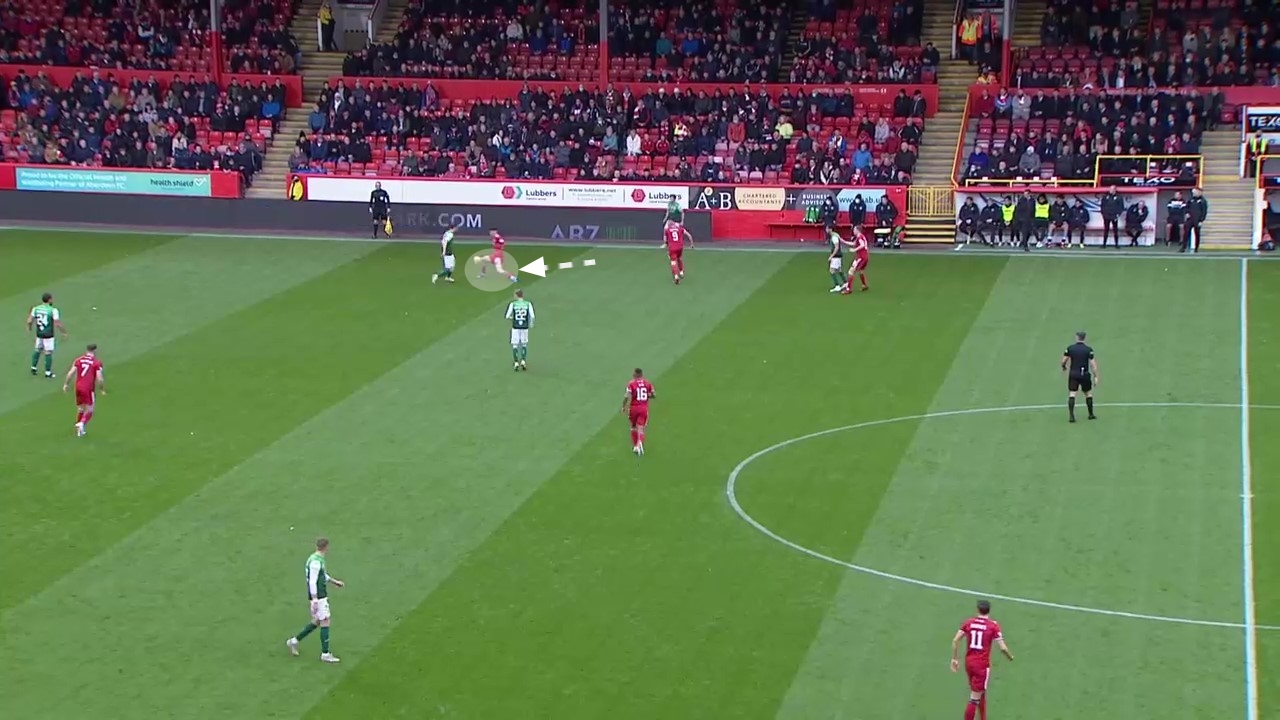 However, Ramsay doesn’t stop there but rather anticipates the situation well and sees that the centre-back doesn’t have many options if he puts the full-back in his cover shadow while running at him. The centre-back under extreme pressure from Ramsay tries to make a pass towards the full-back which Ramsay intercepts since he was very close to the centre-back and makes a quality recovery in the final third. His ability to play with intensity and apply pressure on the ball carrier is suitable for teams looking to counter-press and defend with high intensity. 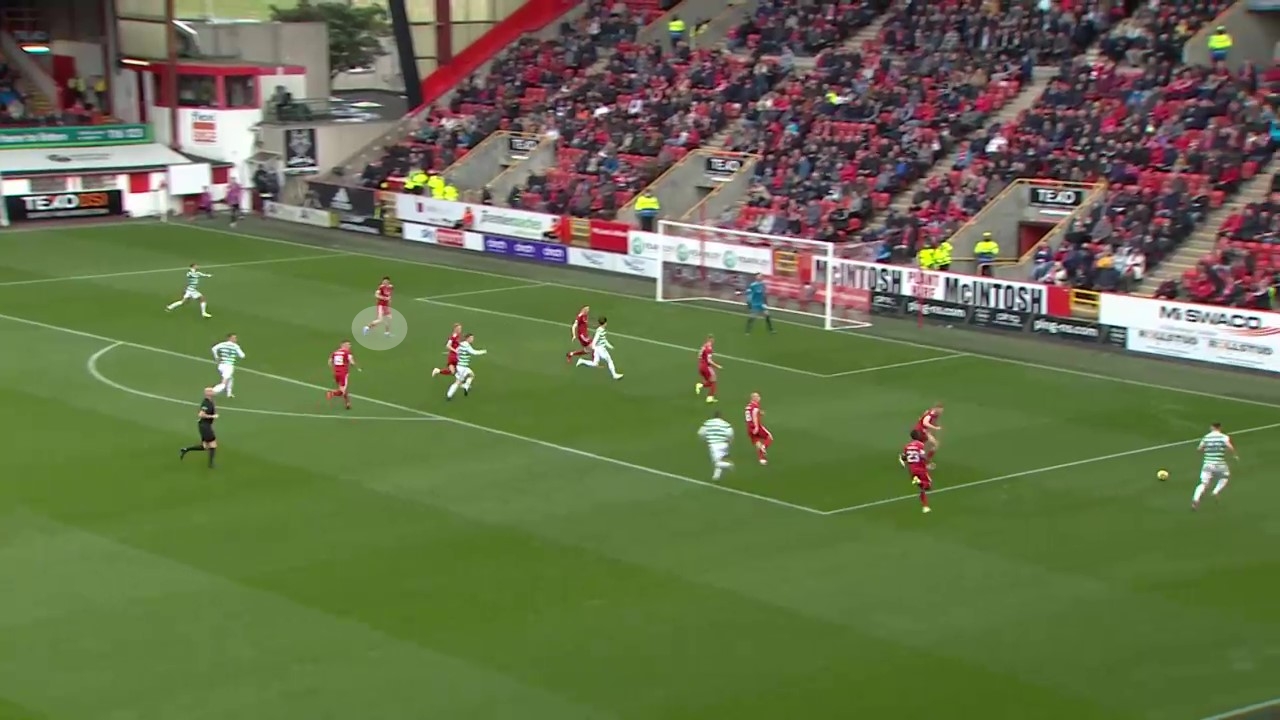 Ramsay constantly defends the far post to a very good level. We can see in the image the moment where he scans the space around him to be aware of his surroundings and check if there is an opponent behind him. He keeps a good distance from the centre-back, which gives him enough time to narrow his position should the opponent try to run into the space between them. His body positioning is very good, as he is positioned laterally which enables him to react quickly in all directions.

The next two images highlight the areas where Ramsay needs improvement if he wants to compete at the highest level. 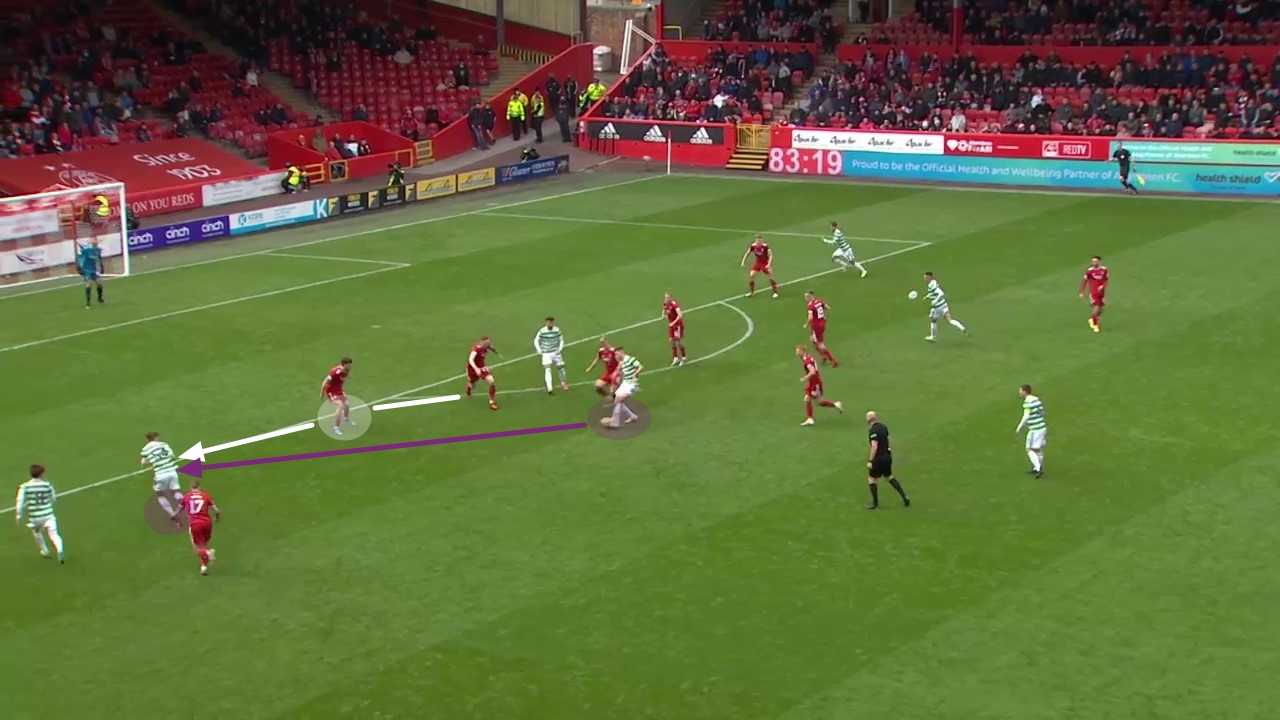 In this sequence, his team conceded a goal after the winger received the ball in the penalty area and made a pass towards the forward for an easy tap-in. The problem for Ramsay in this kind of situation is his high focus on the ball and not on the space around him. He is positioned too narrow and opened too much space for a pass towards the winger who has enough time & space to receive the ball. Ramsay’s body is turned to the wrong side due to his focus on the ball, which prevented him from closing down the winger quickly. 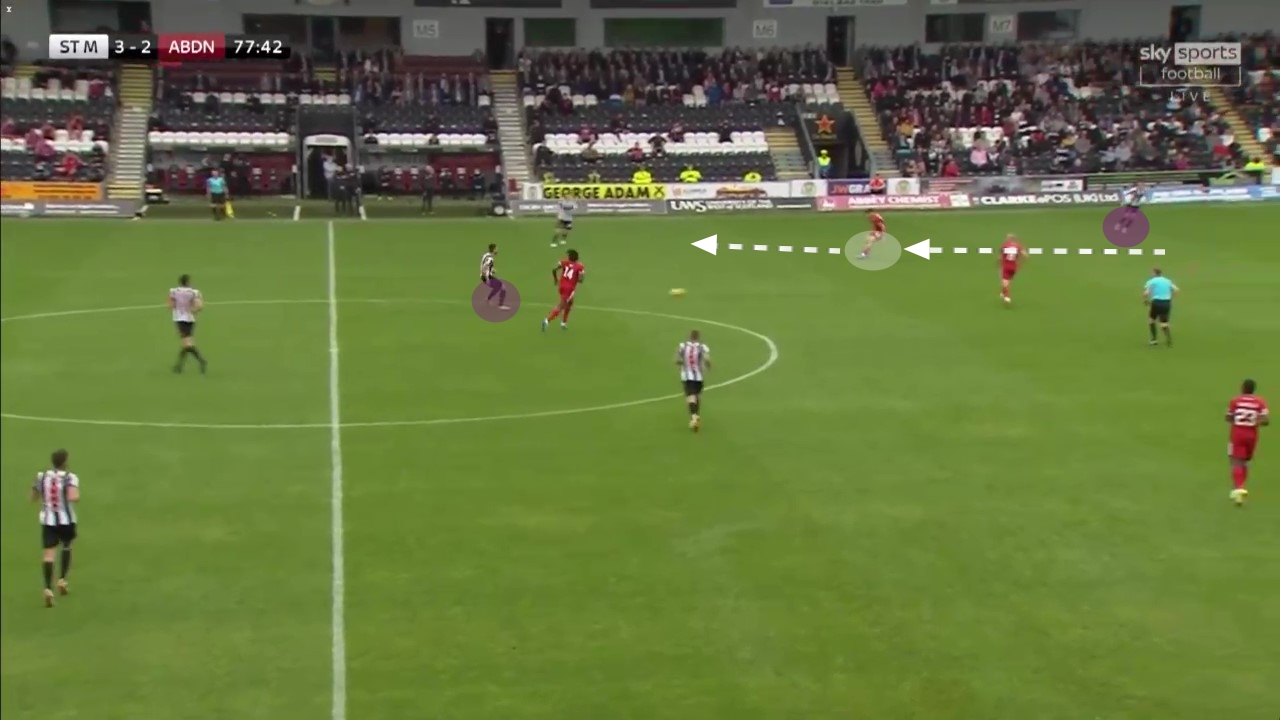 We mentioned his aggression and tendency to press the ball carrier, but this example shows how Ramsay sometimes misjudges situations that put the defence in tough positions. Ramsay tends to step out quickly in his attempt to read the pass of the opponent, but he opened the passing lane towards the winger behind him which endangered his team. He needs to improve his understanding of defensive situations since he wanted to step out on the full-back while his team was in the low block which broke the defensive structure of his team. In this situation, he needs to hold his position and close passing lanes to prevent the opponent from breaking lines with penetrative passes.

Another important thing to highlight is his defensive transition since he is often caught out of position by positioning himself too high while his team has the ball on the opposite side of the pitch, which prevents him from getting back quickly.

Ramsay has a lot of room to improve defensively, especially in his positioning and recognising patterns in different phases of defence. However, he is still young and this is his first season as a regular part of the first team. Most important for his development right now is to play regularly.

This analysis gave us information on Ramsay’s abilities, we saw a lot of positive attributes along with a few areas in which he needs improvement. It is not surprising that many clubs are monitoring him since he has the offensive skillset of a modern full-back. Hopefully, Aberdeen’s tactics and their willingness to give a lot of set-piece duties to the youngster will develop him rapidly this season. 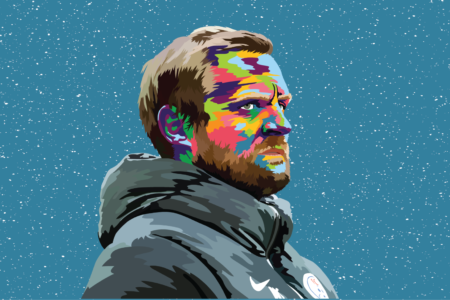 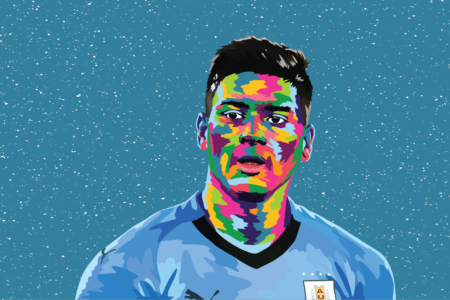 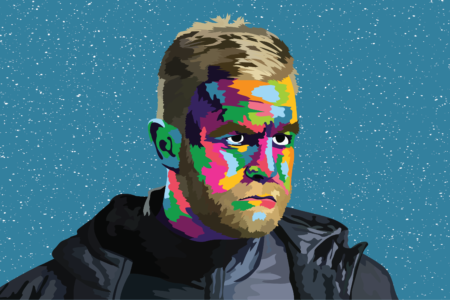 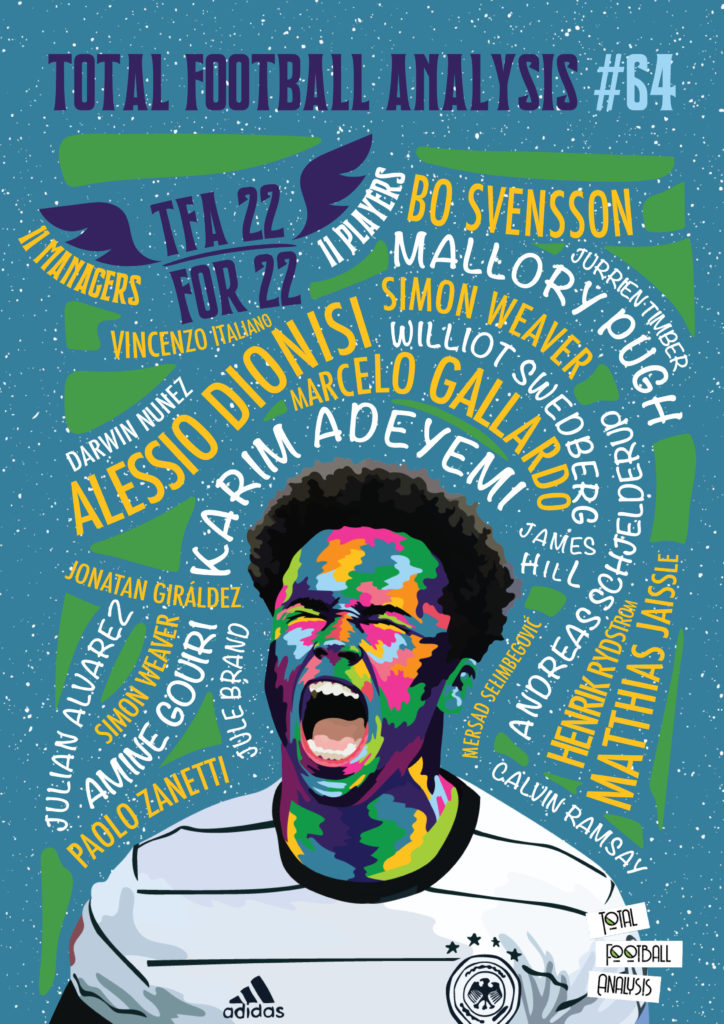