South America is an unresting source of talented players for the football world and, once again, they have a wave of youngsters that will soon make a move to European clubs. Even though the biggest South American stars to have played in Europe have been offensive players, there have also been a lot of quality defenders that were cornerstones for top clubs over the years. One of the latest examples is Brazilian Thiago Silva who currently plays at Chelsea but previously left his mark as captain for both Milan and PSG. Uruguay’s Diego Godín was a crucial part of Atlético Madrid’s rise while his compatriot, José Giménez, now leads the defence at the same club.

This data analysis will share five names who could make a career in European football in the future based on their performances for their clubs in 2021. Each player will be described through a data profile.

The database contains centre-backs who played at least 700 minutes in the last calendar year in the South American leagues. The data used for the analysis is from Wyscout. The goal is to find players who already show high potential through data with very good numbers in most statistics while still having room to improve in the future.

These five centre-backs looked very promising through data analysis and we compared them to all the centre-backs who played at least 700 minutes. The players on the shortlist were born in 1998 or more recently. The first player is an Argentinian 20-year-old who shines in the Argentinian Liga Profesional. 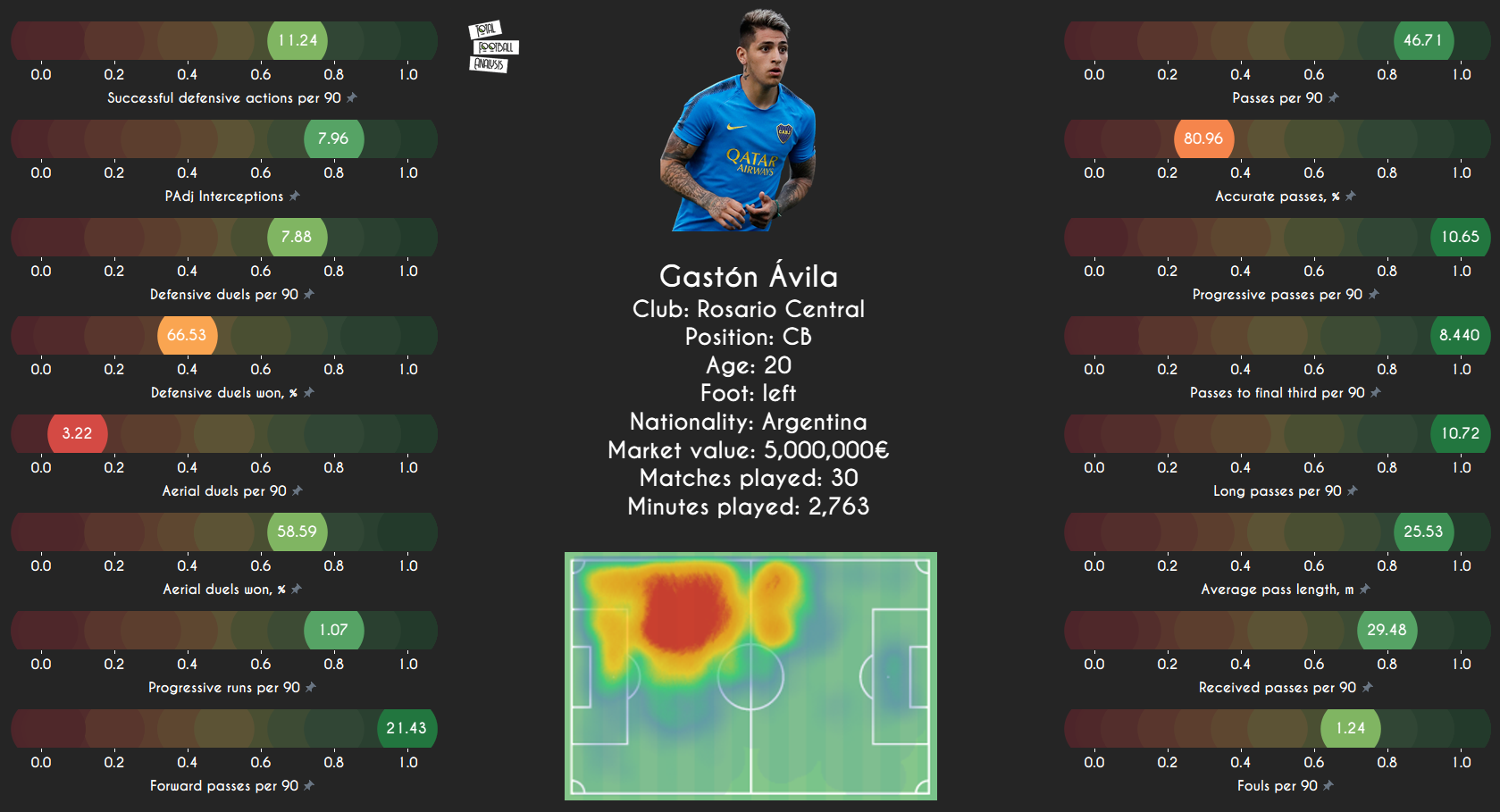 Gastón Ávila is a 20-year-old centre-back who currently plays on loan at Rosario Central from Boca Juniors. Ávila is listed at 182 cm and he is predominantly left-footed. He is a very mobile centre-back and has good pace, which makes him also competent at the left-back position because he can cope with opponents in wide areas.

On his data profile, we can see that he is pretty successful in defensive actions and has a good reading of the game based on his possession adjusted interceptions. Ávila is slightly below average in defensive duels won compared to the other centre-backs, but still has a respectable 66.53% success rate. He doesn’t have many aerial duels, but he shows a good success rate and he is in the top 25th percentile of centre-backs.

We saw that he is showing good defensive numbers, but based on his data, it is clear that his passing and progressive ability is his main strength. Ávila can be labelled as a ball-playing defender because he hits top numbers in progressive passes, passes to the final third, forward passes and long passes. He can progress the ball by carrying in his feet which adds value to his skillset. For a defender, he has slightly lower pass accuracy (80.96%), but given the amount of advanced passing actions he makes, it is understandable. However, we could say that with more experience, he will make better decisions with his passing which will lead to higher pass accuracy.

Ávila’s contract at Boca Juniors expires in 2024 and Transfermarkt values him at €5 million. 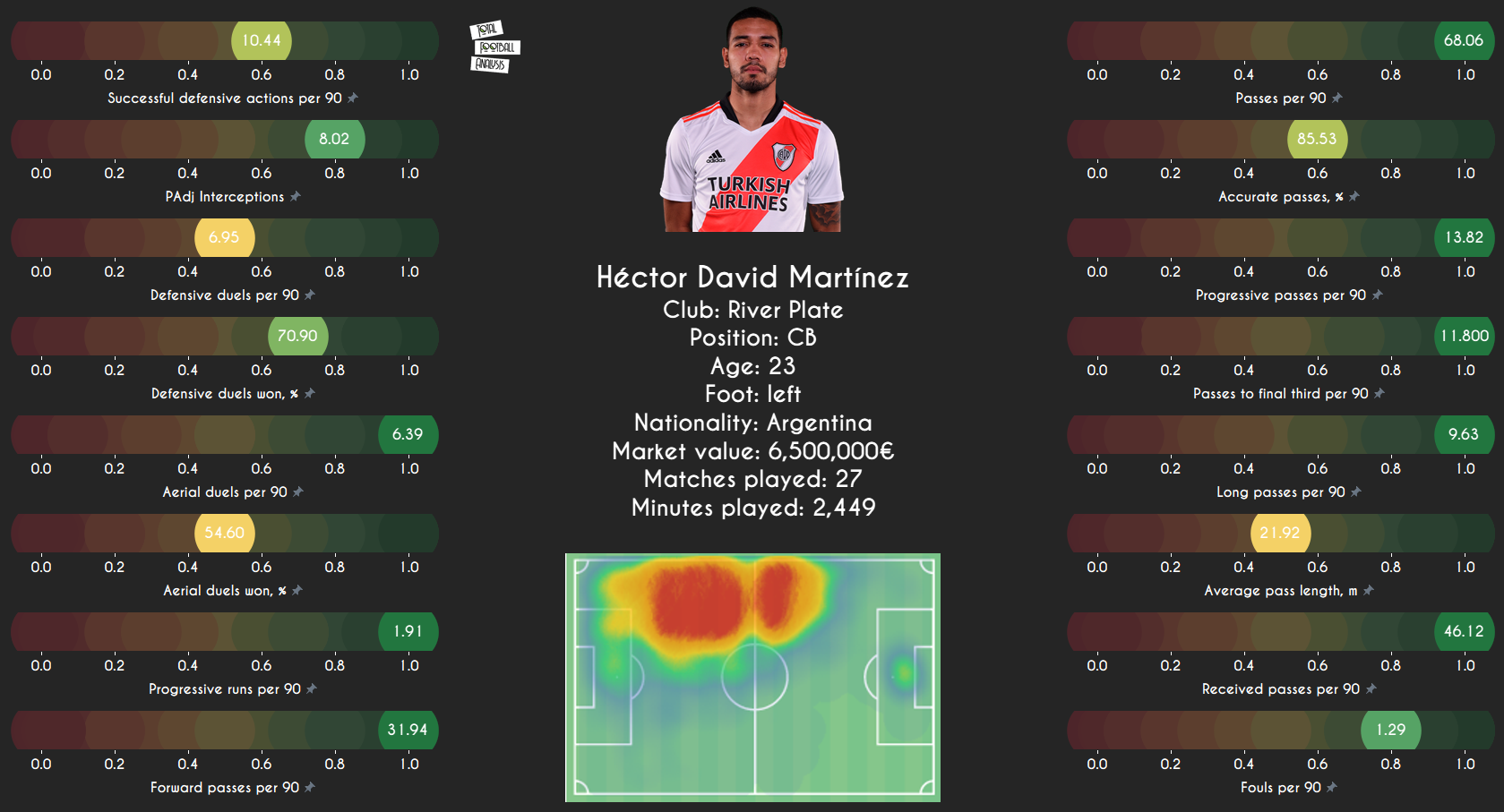 Héctor David Martínez is a 23-year-old centre-back who currently plays on loan at River Plate from Defensa y Justicia. Martínez is listed at 185 cm and he is predominantly left-footed. He is a determined and composed centre-back who has balanced physicality and can cope with both fast and strong forwards.

Martínez shows good performance in defensive metrics, and he is above average in interceptions and successful defensive actions per 90 while also being dominant in defensive duels, winning 70.9% of them. He is involved in a lot of aerial duels, but he is average in that area and has room to improve his aerial ability.

When it comes to passing ability we can see that he is even better than Ávila. He dominates in progressive runs, progressive passes, runs forward, passes into the final third and long passes. Of course, the amount of passes he makes gives him the advantage to dominate in all passing metrics because his team dominates in possession, but that doesn’t diminish his impact. Centre-backs with such quality in possession are in-demand and given the fact that Martínez is composed under pressure, he is one of these valuable centre-backs.

His contract at Defensa y Justicia expires in 2023, and Transfermarkt values him at €6.5 million. Martínez has 9 caps for Paraguay and he has mostly been used as a left-back for his national team. 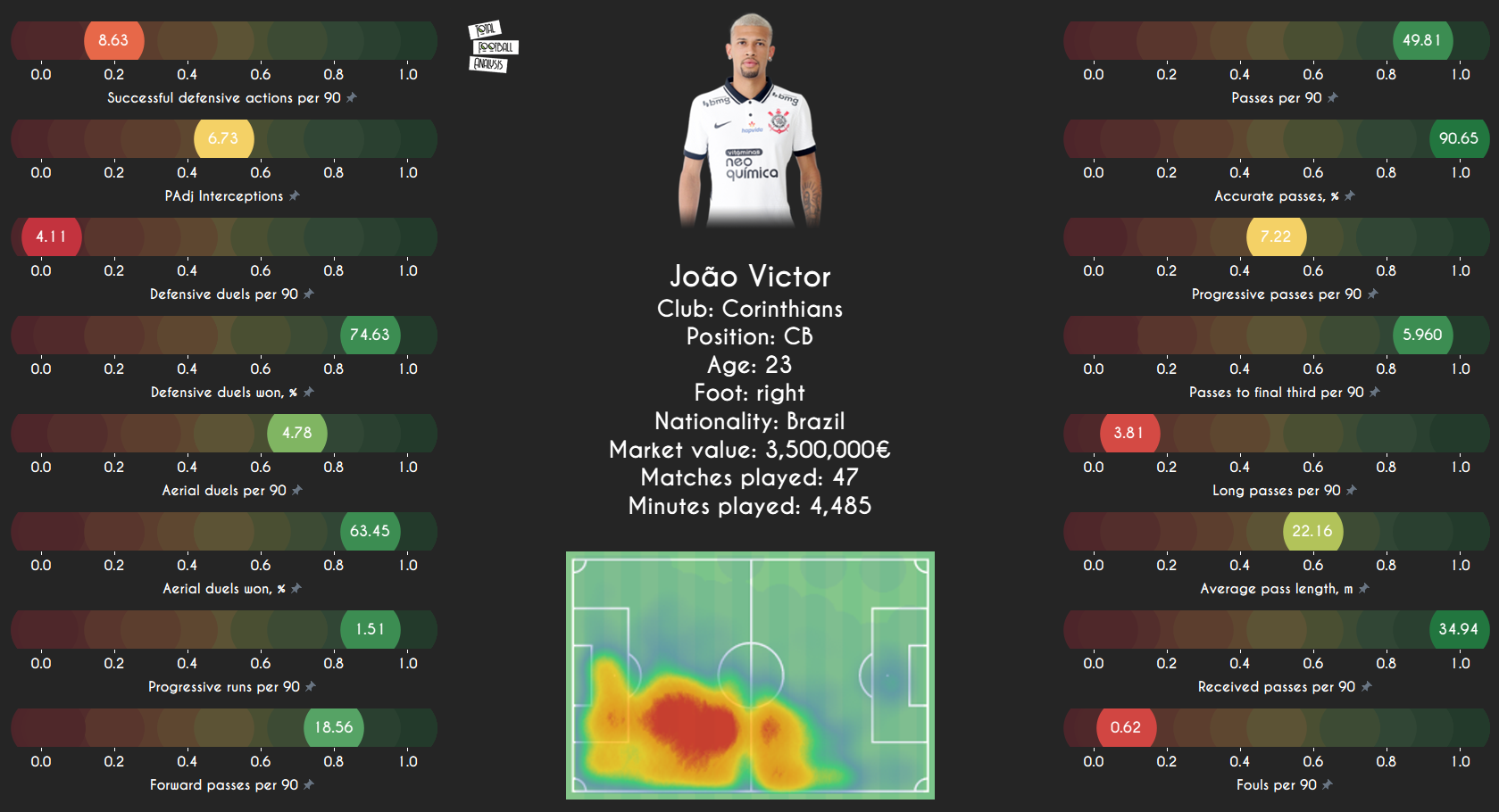 João Victor is a 23-year-old centre-back who currently plays at Corinthians. He is listed at 187 cm and is predominantly right-footed. In recent months, he played a crucial part in Corinthians’ starting XI in Brazilian Serie A, missing just one match because of suspension.  He is leanly built, possesses good pace and impressive jumping reach.

João Victor isn’t that involved in defensive actions which can be seen in his successful defensive actions and defensive duels. However, he is dominant in the success rate of both defensive duels(74.63%) and aerial duels(63.45%). These percentages show how dominant he is in duels and that his team can rely on him, he also rarely makes fouls which is a good sign of his ability to defend.

He is long-legged which helps him in progressive runs and he can carry the ball forward. João Victor is very reliable with his passing (90.65% accuracy) and he is making simple passes most of the time, but still manages to make good angles to progress the ball forward regularly. He rarely attempts long passes and his average pass length is shorter. João Victor is in the 5th percentile for attempted passes to the final third.

His contract at Corinthians expires in 2023 and Transfermarkt values him at €3.5 million. He showed rapid improvement in the last two seasons when he got regular minutes in the first team. 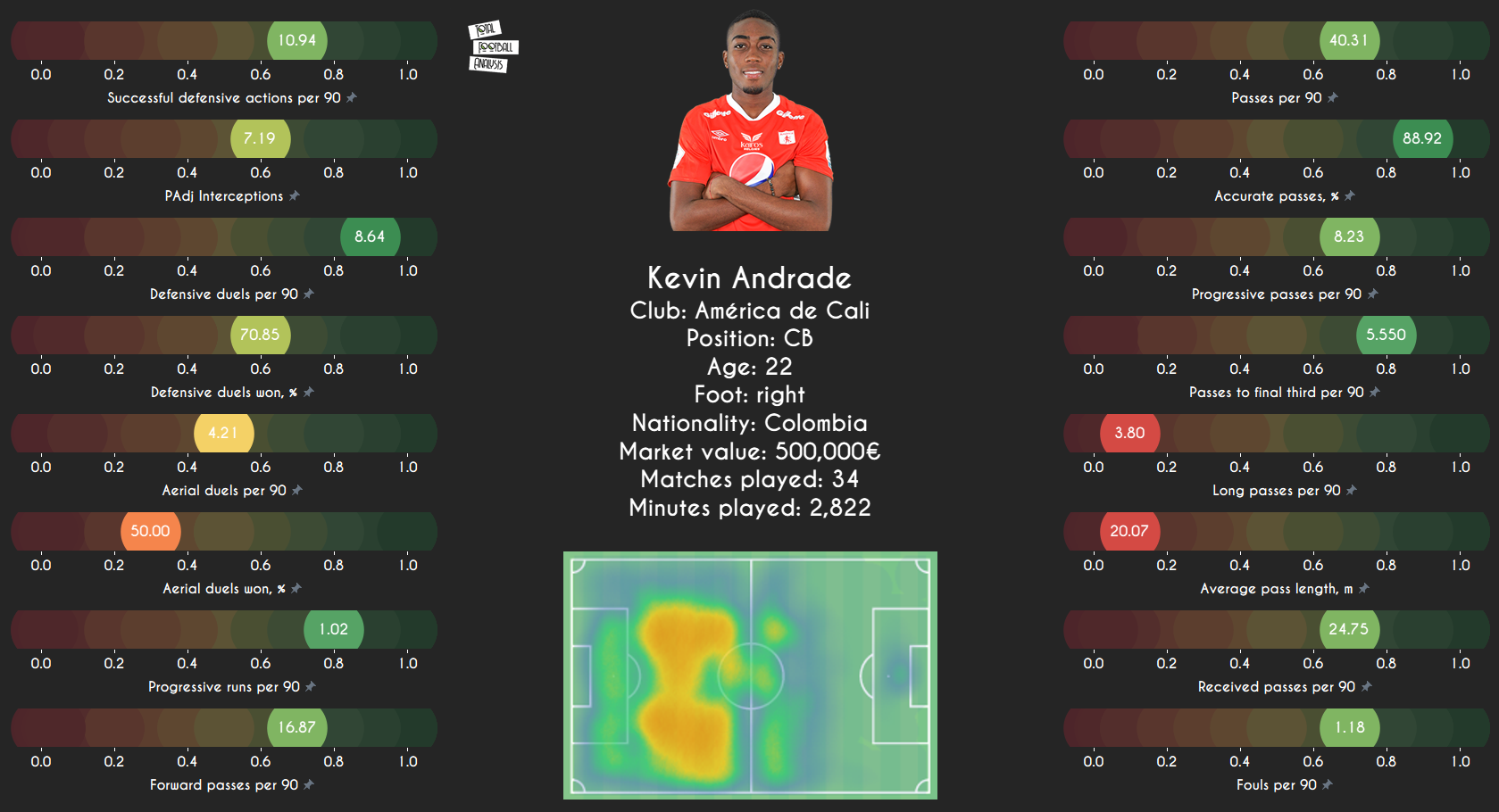 Kevin Andrade is a 22-year-old centre-back who currently plays at América de Cali. Andrade is listed at 189 cm and he is predominantly right-footed. He is a physically strong defender who reads the game well and is capable of providing solid performances in front of his own goal. Andrade is a versatile player and he played a few matches this season in a right-back and defensive midfielder position.

Based on Andrade’s data profile we can see that he is pretty much above average in most of the metrics with only showing slight concern with his aerial ability which shouldn’t be a problem for him given his frame. He makes a lot of successful defensive actions, and he is capable of intercepting passes regularly. Andrade is involved in a lot of defensive duels and wins most of them (70.85% success rate).

He can progress the ball either by carrying or passing the ball. He is a very accurate passer with 88.92% of his passes finding the target which makes him reliable in the build-up for his team because he balances well with lateral and forward passes. Andrade mostly makes short passes and avoids attempting long passes.

Andrade’s contract at América de Cali expires in the summer of 2022 which makes him a good target for clubs looking for a strong and reliable centre-back. Transfermarkt values him at €500k. 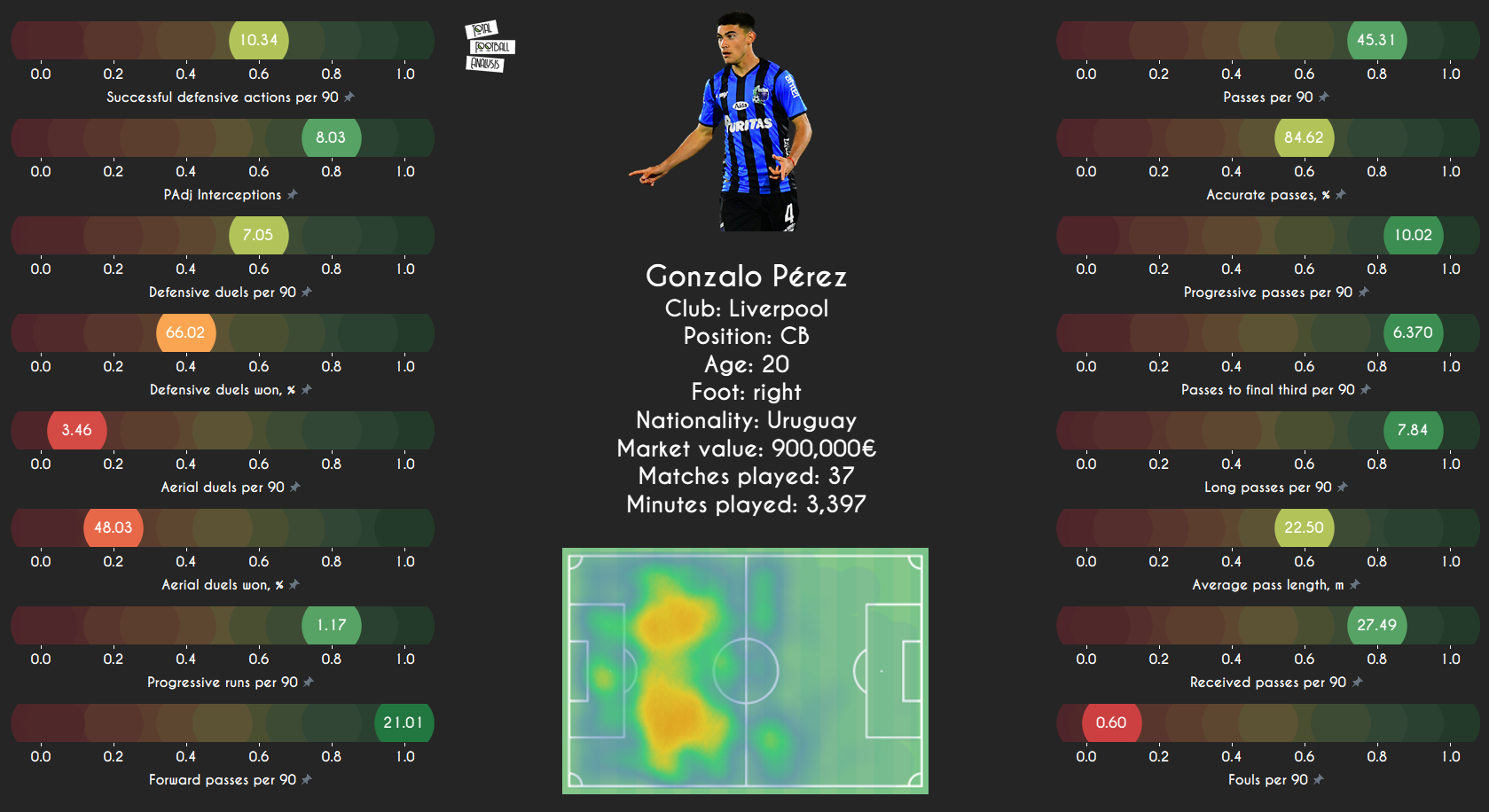 Gonzalo Pérez is a 20-year-old centre-back who currently plays at Liverpool Montevideo FC. Pérez is listed at 185 cm and he is predominantly right-footed. He is a fast and mobile centre-back who anticipates situations well and can provide cover for his defensive partner.

We can see on the data that Pérez can intercept passes regularly and that he has above-average numbers for successful defensive actions. He wins ⅔ of his defensive duels, but this is below average compared to the other centre-backs in South America’s top leagues. His aerial ability needs improving, based on the number of aerial duels he isn’t exploited by the opponents as often, but on a bigger level, it would be a liability. Pérez rarely makes fouls, which is a good trait.

He performs impressively when in possession of the ball. We can see that Pérez is averaging a high amount of progressive actions, he is composed under pressure and will often try to catch opponents on the wrong foot to dribble him and avoid pressure. He is an accurate passer(84.62%) given the amount of advanced and risky passes he attempts. Pérez attempts a lot of long passes and has the ability to switch flanks or try to find the opposite winger in behind the defence.

Pérez has a long-term contract at Liverpool Montevideo FC, which ties him to the club till 2026. Transfermarkt values him at €900k.

Through this analysis, we explored the South American market to find interesting young centre-backs who could be good options for European clubs in the next transfer windows. João Victor, Héctor David Martínez and Gastón Ávila all had good seasons in the relatively strong Brazilian Serie A and Argentinian Liga Profesional, which makes them top targets, while Gonzalo Pérez and Kevin Andrade play at slightly weaker leagues but show good potential and are worth monitoring.