Apart from Haaland, Borussia Dortmund have another of the hottest commodities in world football at the moment: Jude Bellingham. The 18-year-old midfielder has been phenomenal for Dortmund and is already attracting interest from Chelsea, Man United and Liverpool among others. These clubs are rumoured to be willing to pay fees in the region of 100 million euros for the English midfielder.

Bellingham started his career at Birmingham, where he’s the youngest ever player and goalscorer. For the Blues, Bellingham played just 44 games, scoring 4 goals and assisting another 2. His potential was so obvious that Dortmund made him the most expensive 17-year-old player in history when they paid 23 million euros for him in 2020.

Since he arrived in Germany, Bellingham has played 68 games, registering 7 goals and 13 assists. He’s also part of the England squad and has 10 caps to his name. 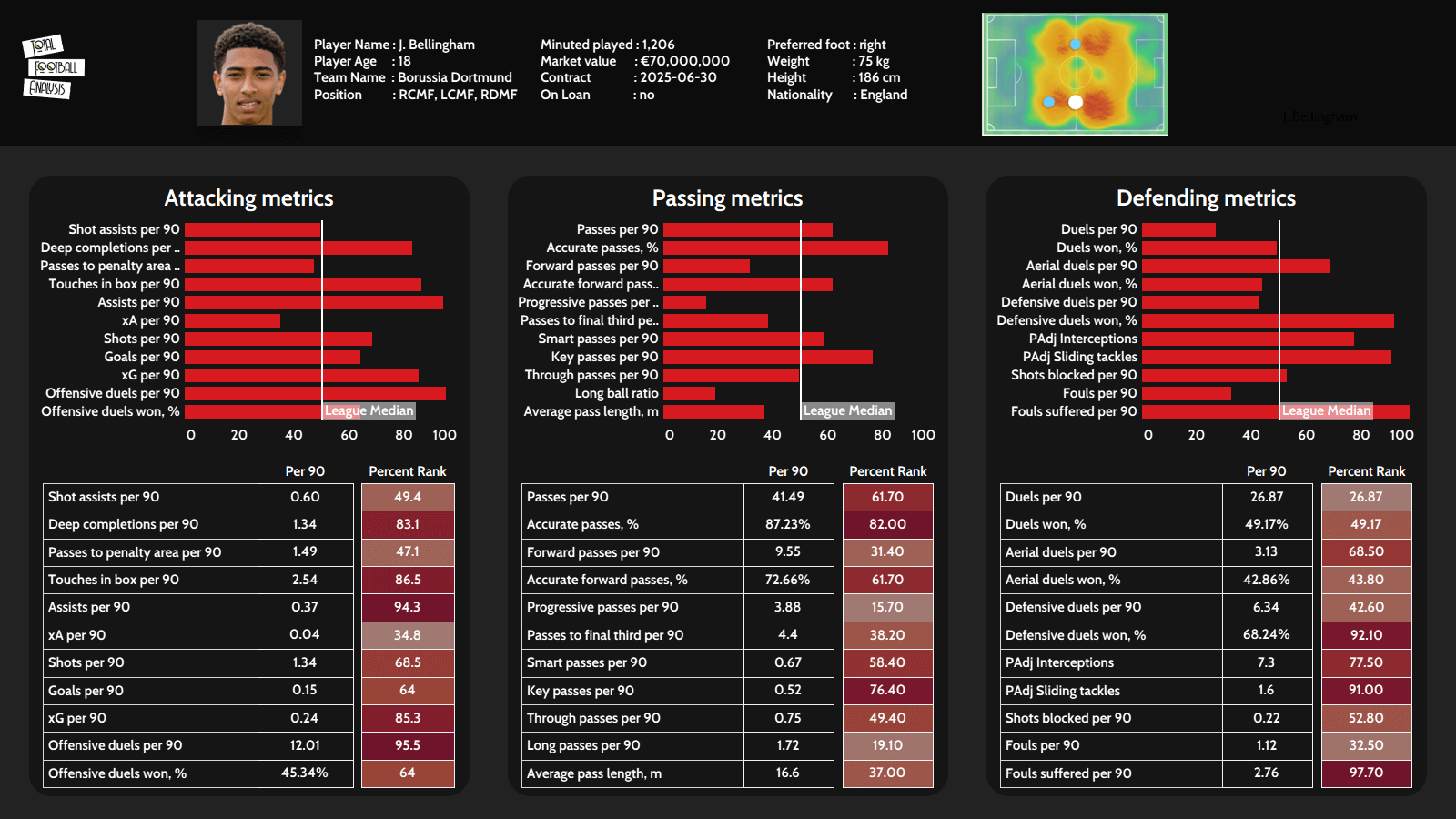 Bellingham (data profile above) is an energetic and complete central midfielder who stands out for his ability to get the ball into dangerous positions and also appear in the box to be a scoring threat himself. On top of that, he’s very good in defence, wins lots of duels and covers a lot of ground for his team. He could cover any central midfield position, from defensive midfielder to a number 10 role, but his best position seems to be as a box-to-box midfielder.

In this data analysis, we have used our exclusive xGOLD tool to find four players statistically similar to Jude Bellingham who are under 20 years old and whose value is less than 10 million euros. The analysis of the best three results with similar statistics to Bellingham’s is presented here.

All the radars in this data analysis show the percentiles comparing each player to the rest of the strikers in their league. For example, a higher value on shots per 90 doesn’t mean that player takes more shots, it means he takes more shots than a higher percentage of strikers in his league. We must take into account the difference in level when interpreting the radars as it isn’t the same to perform in the Austrian Bundesliga, the Spanish Segunda RFEF or the Brazilian Serie A.

Pablo Marín is a Spanish midfielder who came through the academy at Real Sociedad and is currently playing for their C team in Segunda RFEF, the Spanish fourth tier. He has already played 11 games this season and scored 4 goals, earning his opportunity to be on the bench for the first team. His natural step now would be to play with Xabi Alonso’s Real Sociedad B in La Liga 2.

Currently part of the Spain U19 squad, he’s quite unknown to the big public and transfermarkt values him at just €200,000. Real Sociedad aren’t an easy team to negotiate with but surely they can’t ask for anything crazy for a player who hasn’t even made his first-team debut. 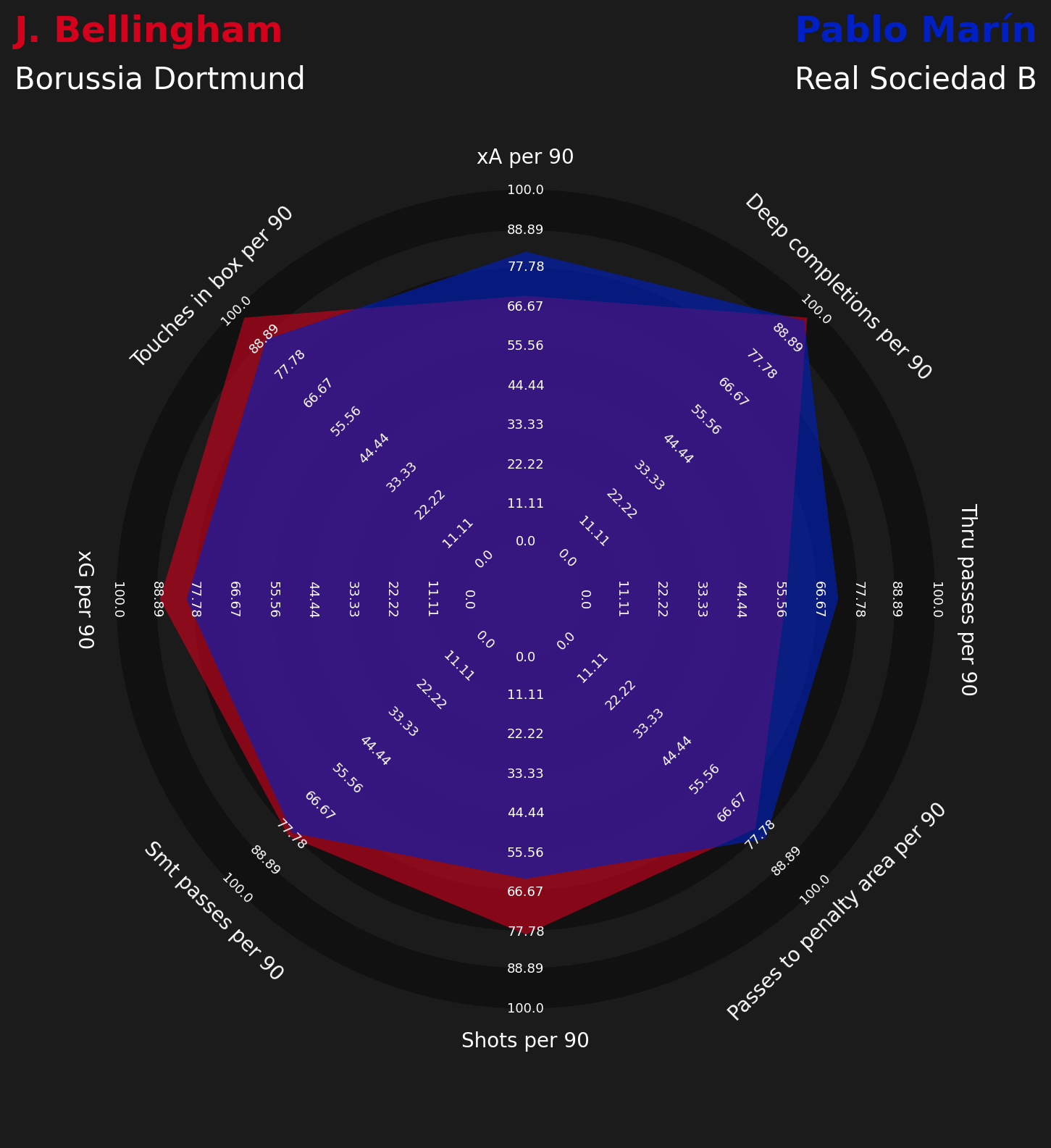 Quick and lively to combine and dribble when he receives in tight spaces. Likes to open play and then attack the box with late runs. Reads the game well to get into the box with runs in behind when the striker comes deep. Calm to raise his head and choose the best passing option to assist and also to finish in 1v1 situations. He’s quick and agile and can beat players both with skill and pace. 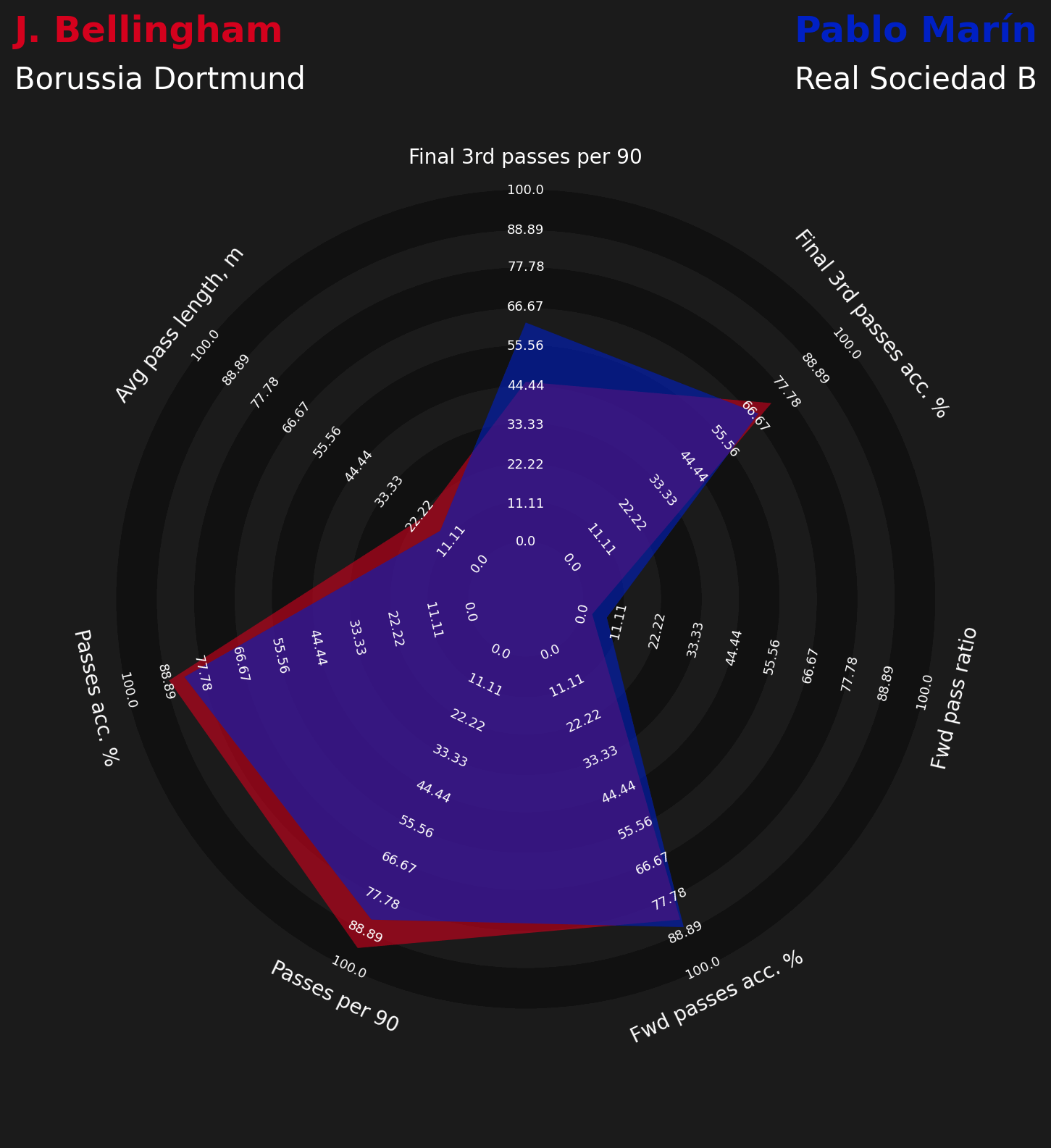 The passing radar is again very similar. Marín does better in final third passes(7.18 per 90) and, like Bellingham, really stands out in passes per 90 (42.27) and forward passes accuracy (75.24%). His general passing accuracy is also good and he tends to play short passes (17.5 meters) as the English midfielder.

A dynamic player who can come deep to take the ball and organize the attacks, move between the lines and also attacks spaces in behind. Gets on the ball a lot and shows quality to progress with accurate passes. He shows the desire to dominate games and has the quality to do so even playing against much older players. Plays a lot in one or two touches to keep the attacks fluid, showing a good understanding of what’s around him. 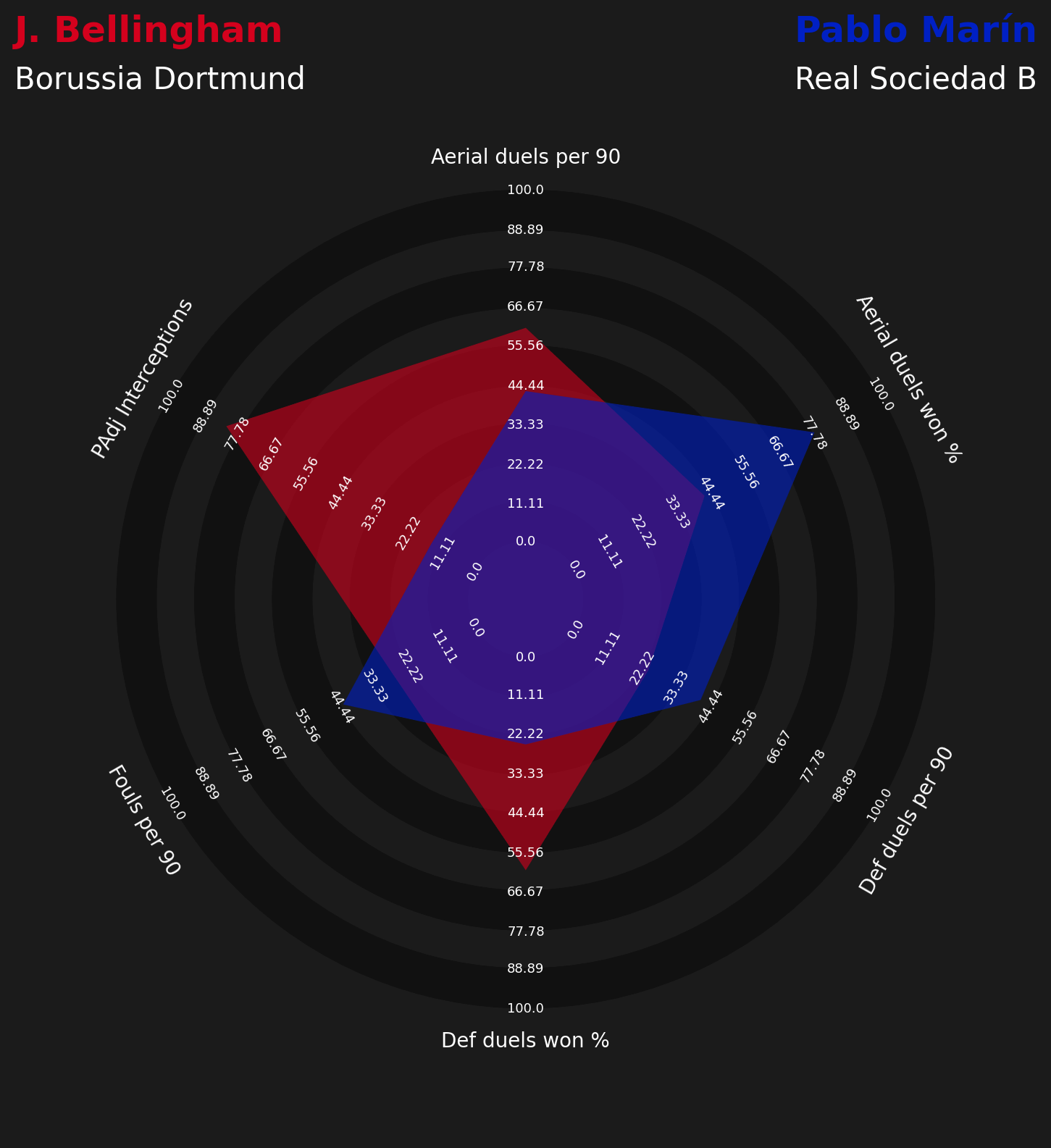 It’s in the defensive radar where we see more difference. Marín gets into more defensive duels (6.37 per 90) and is good in the air (52.78% success rate) but doesn’t win too many defensive duels (53.97%) and ranks very low in possession-adjusted interceptions (3.54 per 90).

Not especially big but is aggressive and intense in the press and doesn’t shy off challenges. Does well in the air, especially considering his size.

With Marín, Dortmund would get a midfielder who can play at a high tempo, very difficult to press because he knows what to do before receiving the ball and present in all phases of the attack. He can progress from midfield, create from the second line and also get into scoring positions. He’s still very young and playing at a low level but so was Bellingham when they signed him and he looks like one of those players who does better against better rivals.

Nicolas Seiwald is an Austrian midfielder who has been at Salzburg since he was at least 8 years old. As it’s usual, he started at Liefering in the 2. Liga, where he played 37 games, scoring 5 and assists another 7. For the first team, Seiwald has played 46 games, scoring just once but assisting 7 goals.

He has played for Austria at every age group and already has two senior caps, both of them as a starter in the last two games of the World Cup Qualifiers. Transfermarkt value him at 7 million euros and he wouldn’t be cheap considering the quality of players Salzburg usually produce and also the fees they get. 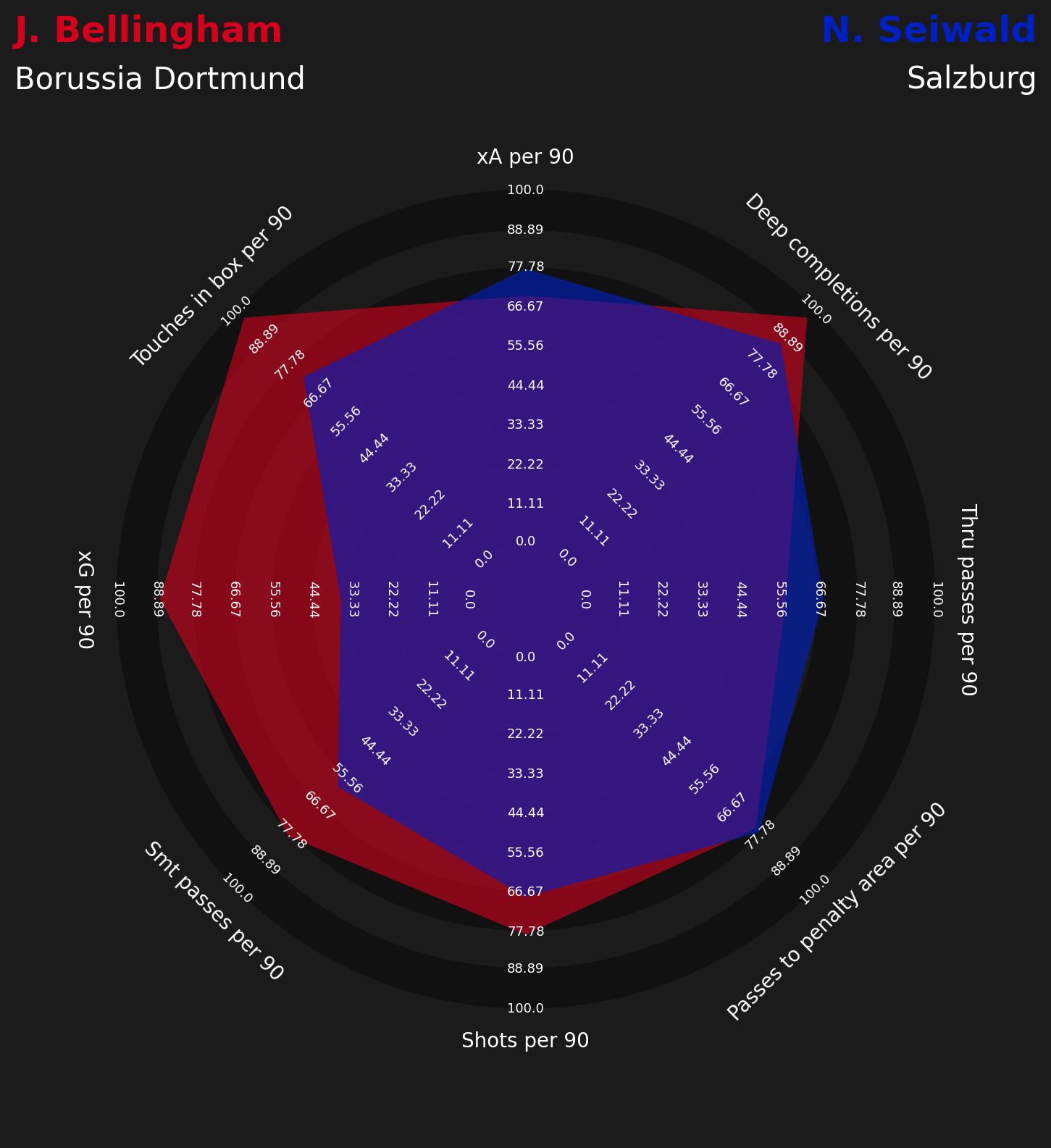 Very elegant to drive the ball forward breaking lines. Doesn’t appear in the final third as often as Bellingham but has the quality to get there with combinations or dribbles. He usually shoots from far but with great technique. Uses his passing range to assist from deep, excelling in quick transitions but also getting into the box with quick combinations or dribbles and then choosing the right option. 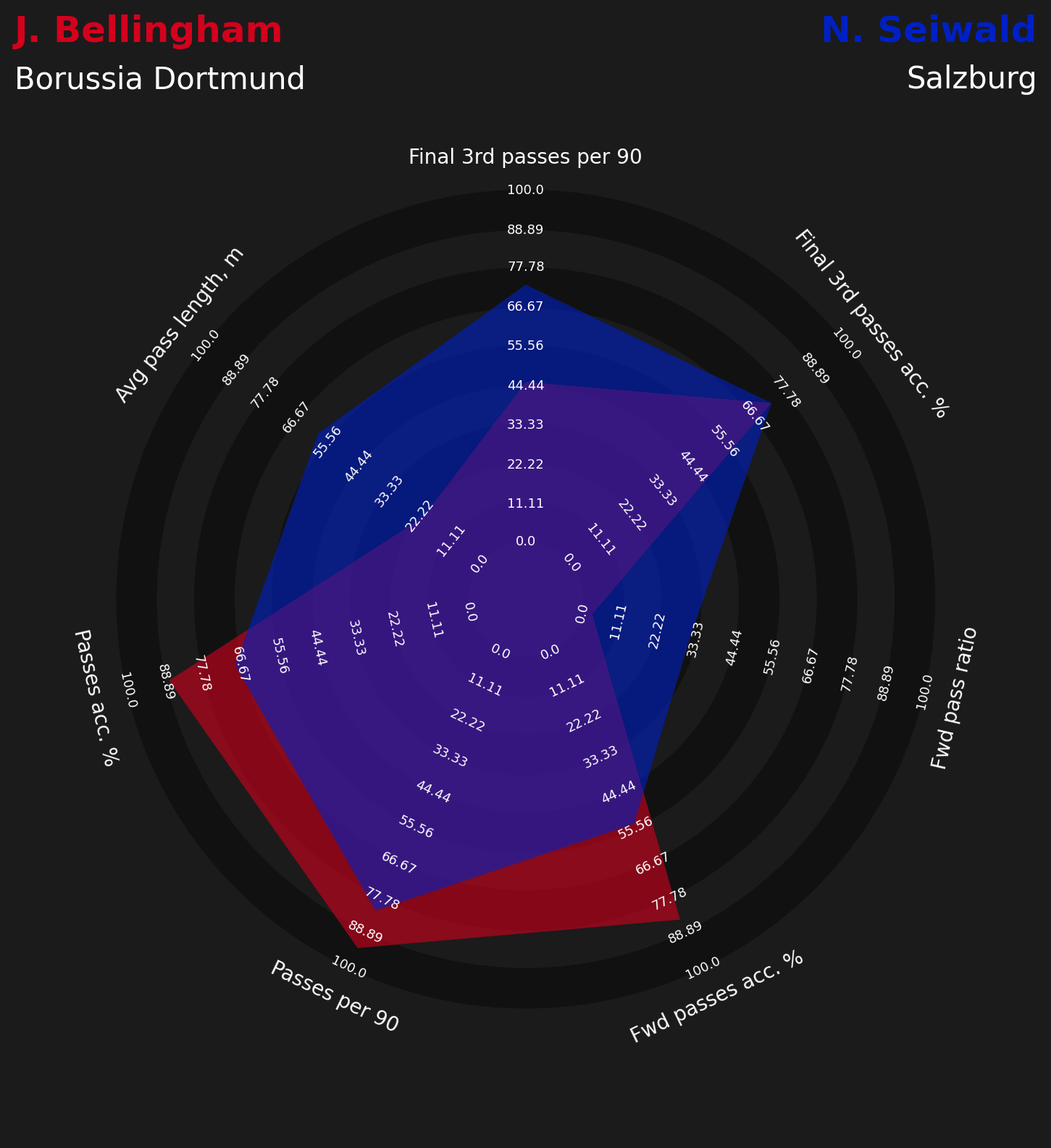 Gets deep and wide to get the ball in the build-up. Playing slightly deeper than Bellingham, he plays forward more often and uses his dynamism to combine and play out of pressure. Great passing range, can progress with short and long passes and gets the ball into the final third very often and with a lot of quality. 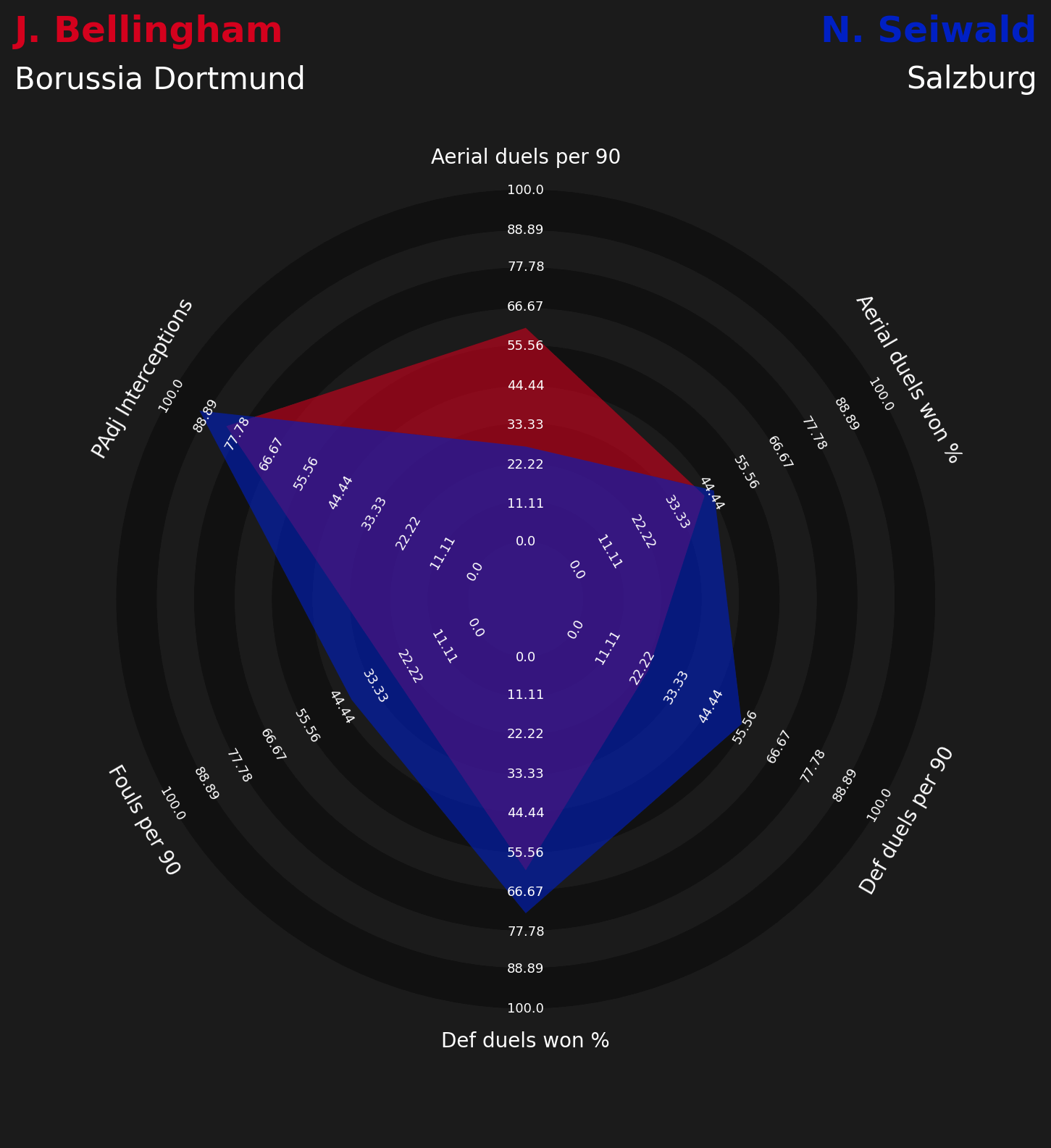 In defence, Seiwald ranks slightly better than Bellingham in most metrics. His possession-adjusted interceptions (11.12 per 90) are among the very best in the Austrian Bundesliga, he gets into more defensive duels than the Englishman (7.36 per 90) and wins a lot of them (63.56%). They’re similar in the air.

Very aggressive and strong in defence. Reads the game very well to counter-press and recover the ball as high up the pitch as possible. Has pace and stamina to track back and is very difficult to beat in 1v1. Often positioned around the final third but not in the box, he’s always ready to collect clearances and recycle possession.

If Dortmund got Seiwald in the place of Bellingham, they would be getting a slightly more defensive player but still with excellent quality. A powerful runner both on and off the ball with a fantastic passing range, he can adapt to different situations and get the ball forward in many ways. He doesn’t have the same final presence as Bellingham but it’s something he could develop if given a similar role and he has proven he has scored when playing for Liefering. The adaptation from Austria to Germany would be quick in terms of culture and language. He has Champions League experience too so the level of football shouldn’t be new to him.

João Gomes is a Brazilian midfielder product of Flamengo’s academy. He made his debut aged 19 and since then he has played 58 games for the first team, scoring twice and assisting once. He has already played 44 games (over 2,300 minutes) in all competitions this season.

Already a Brazilian Serie A winner, Gomes is valued at 3.5 million euros on transfermarkt. With his contract expiring in December 2025, he could become Flamengo’s next top sale after Gerson to Marseille (25 million euros), Reinier and Vinícius Jr to Real Madrid (30 and 45 million euros) or Lucas Paquetá to Milan (38.4 million euros). 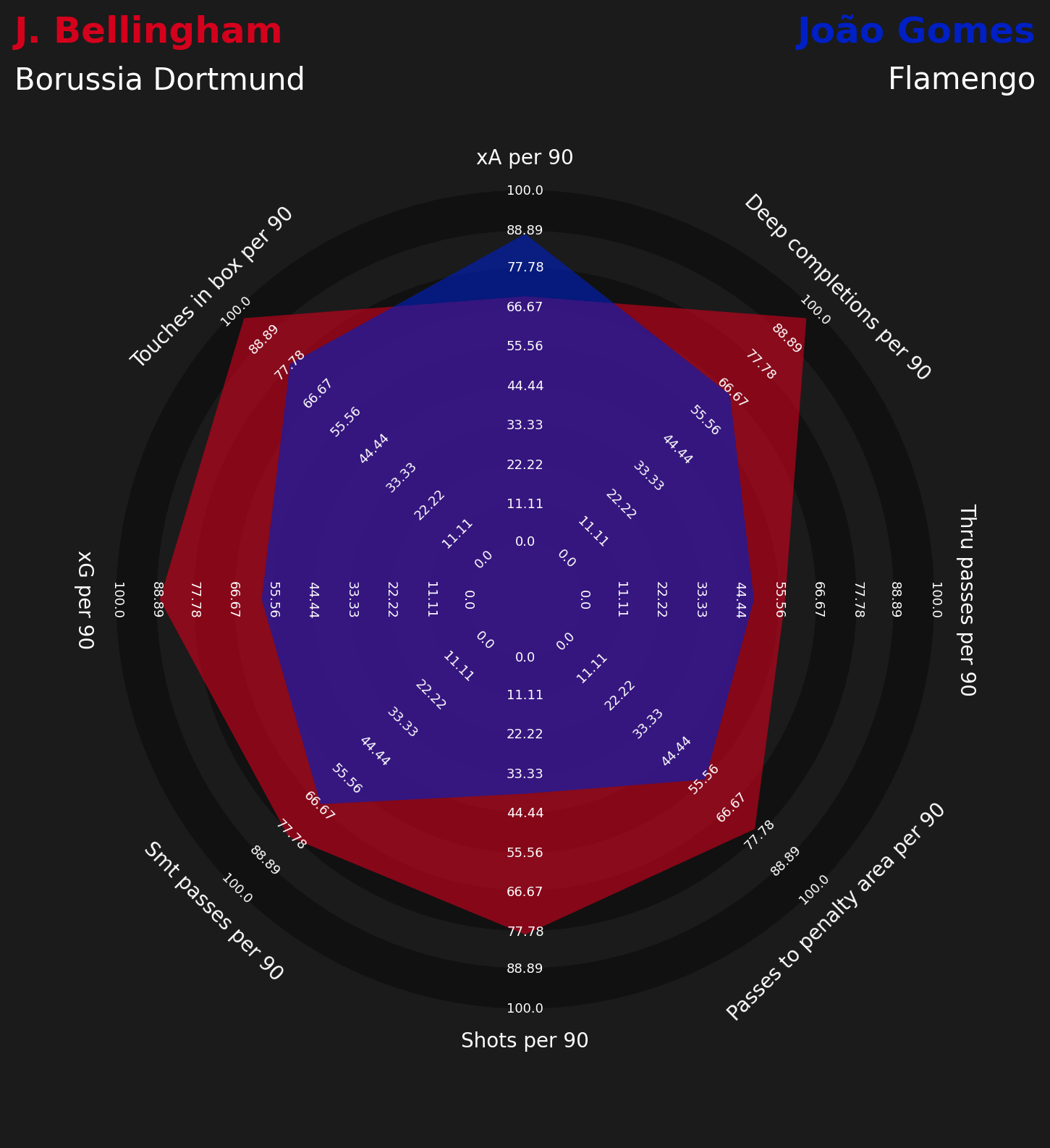 In attack, Gomes isn’t as impactful as Bellingham. He doesn’t rank especially high in through passes, deep completions or passes to the box but still manages to rank better in expected assists (0.2 per 90). He’s very active in the box (2.12 touches in the box per 90) but doesn’t shoot a lot (0.98 shots per 90) so his xG aren’t especially high (0.08 per 90).

Not a pivot who will always be a passing option to distribute from deep, Gomes likes to pass and move and advances with his team. He gets in and around the box a lot, has the quality to play nice passes to the wide players. Despite not having an especially high volume of passes into the box, Gomes has the vision to create great chances when he sees the opportunity as proven by his 0.2 xA per 90. He can get past his marker with the ball at his feet, using his very strong legs to turn and protect the ball. 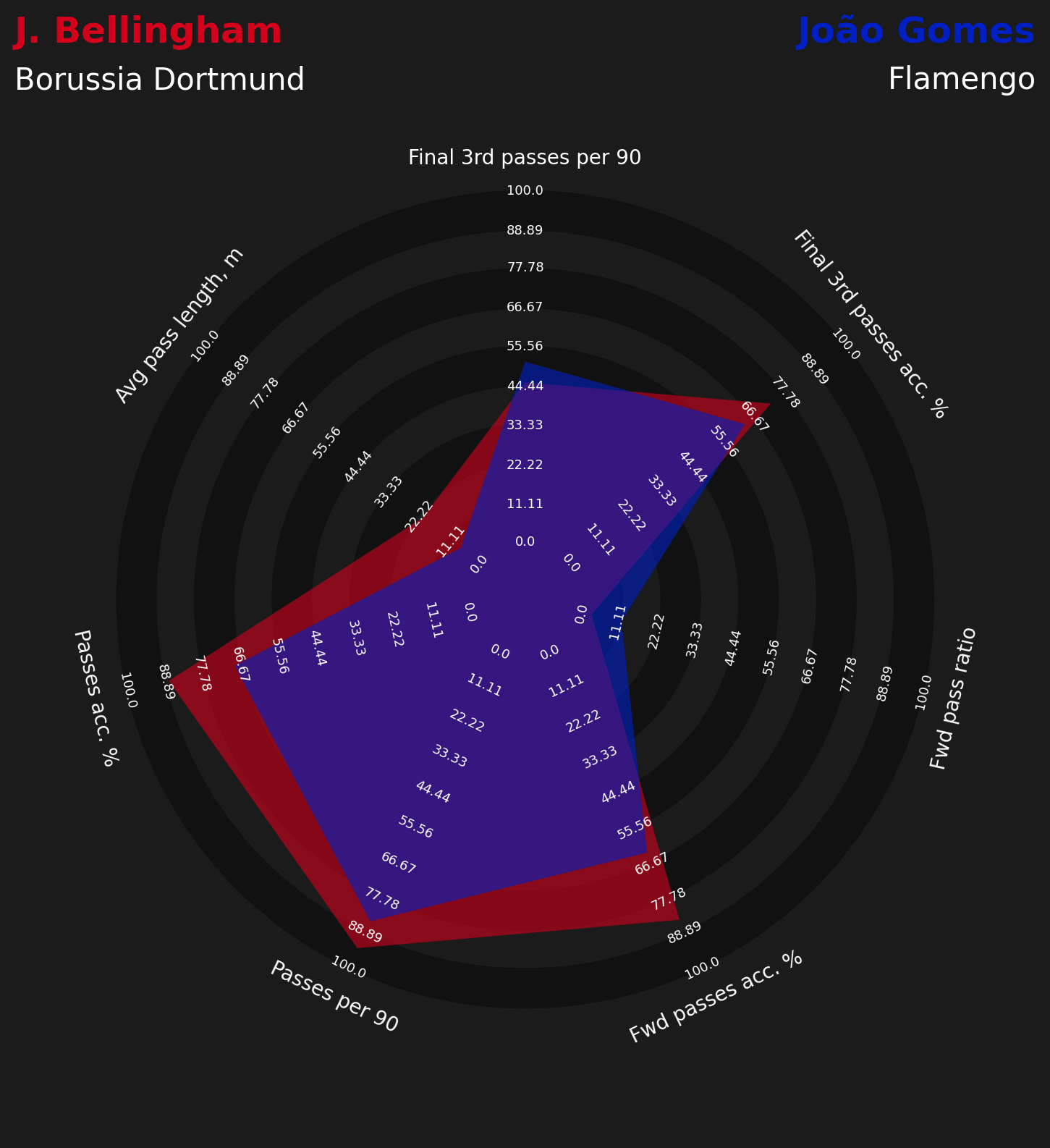 Both players share very similar passing radars even if Gomes ranks lower for most metrics. He’s involved in a lot of passes (50.88 per 90) and with good accuracy (85.55%) but doesn’t stand out in any other statistics.

As a box-to-box midfielder, Gomes often starts the attacks deep and gets on the ball a lot to help his team advance and be involved in the progression all around the pitch. He usually keeps his passes short but with intelligence to help his teammates advance. He has the quality to combine and play quick 1-2s to break lines and is agile and quick in short distances. Not a player who will consistently break lines with intricate passes, he still does well with his dynamism and ability to play quickly in small spaces. 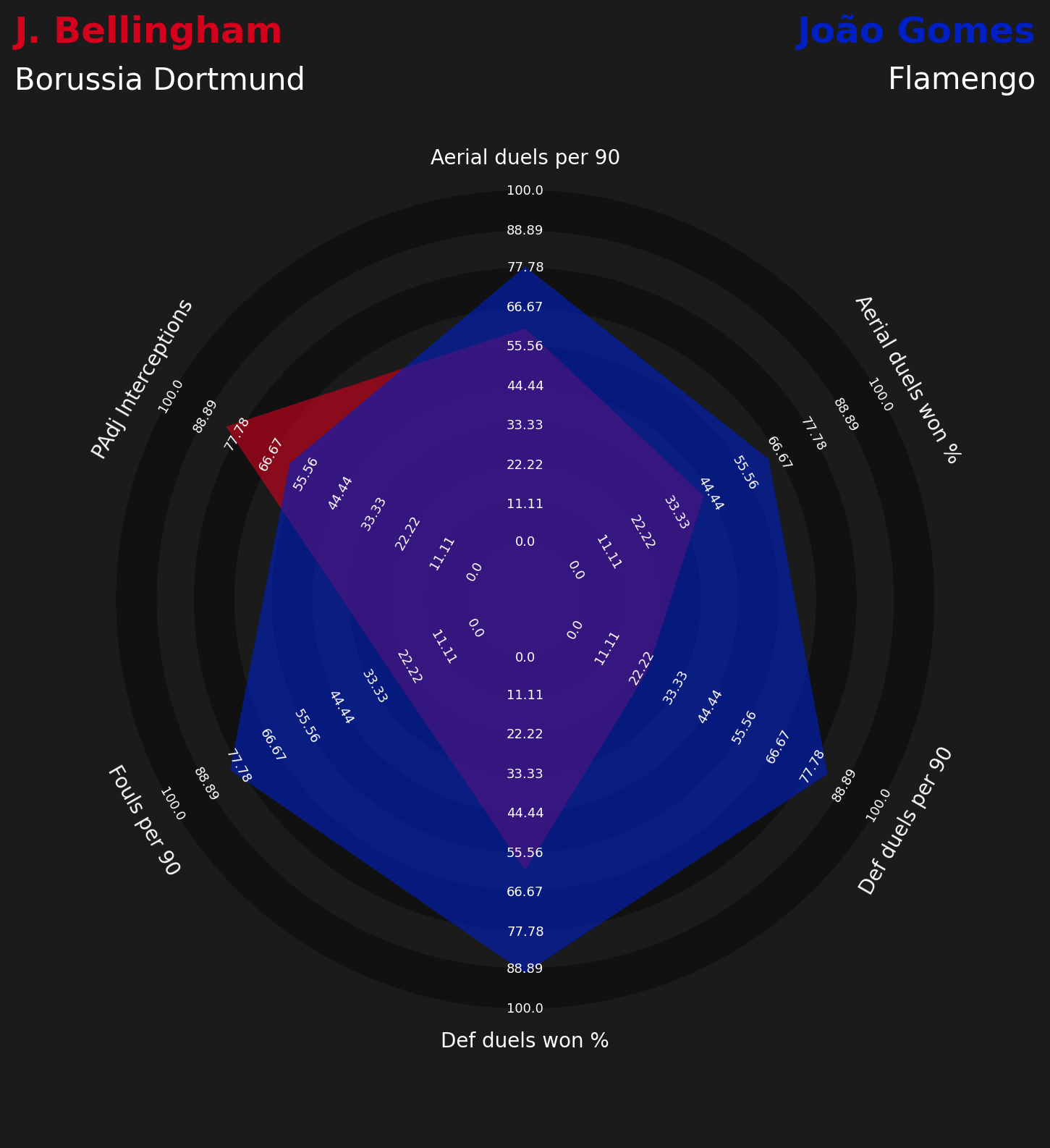 Gomes isn’t big (1.76m) but is strong and uses his low centre of gravity to win defensive duels very easily. Very aggressive to press, he covers a lot of ground and gets into duels all the time to prevent rivals from playing comfortably.

In Gomes, Dortmund would get a player who physically dominates rivals, dynamic and with the vision to create great chances despite not playing lots of passes into dangerous areas. He’s not as present in attack, doesn’t contribute with goals and progresses more through quick combinations than with creative passes. Coming from a very high level, his adaptation would be more of a cultural than a football issue but he has the qualities to play and perform immediately at any level, with the potential to become a top player.

Finding a player as complete as Bellingham at such a young age is almost impossible, which is why he will probably become the most expensive player at his age again. However, our data analysis has thrown some interesting options that replicate several of his traits and are still very young to become as complete as him.

From a relatively low-risk option like Seiwald to a player who hasn’t made his first-team debut like Marín or someone who would need to adapt to a new culture and football like Gomes, we have presented some options Dortmund could consider to replace Bellingham for a fraction of the fee they would get for him. 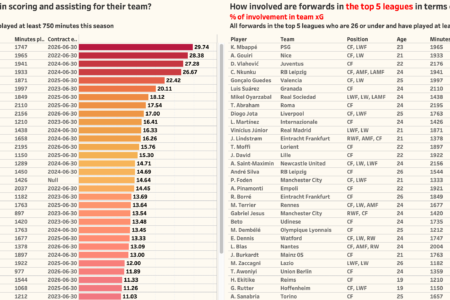