One of the exciting breakthroughs in the field of football data analysis has been PV. Short for Possession Value, it is a statistic that “assigns credit to players based on positive and negative contributions around key on-the-ball events”. This is the definition given by Opta and captures PV’s essence. Now, we don’t have the type of data Opta has. However, we can come close to defining PV through the data that is available to us.

In the recent UEL Final, where Sevilla beat Inter Milan 3-2, we saw amazing displays and a variety of tactics. However, how do we exactly put our finger on how the pass helped the team’s chance of scoring? Not every pass does this and for that reason, I calculated PV for only attackers in the game. 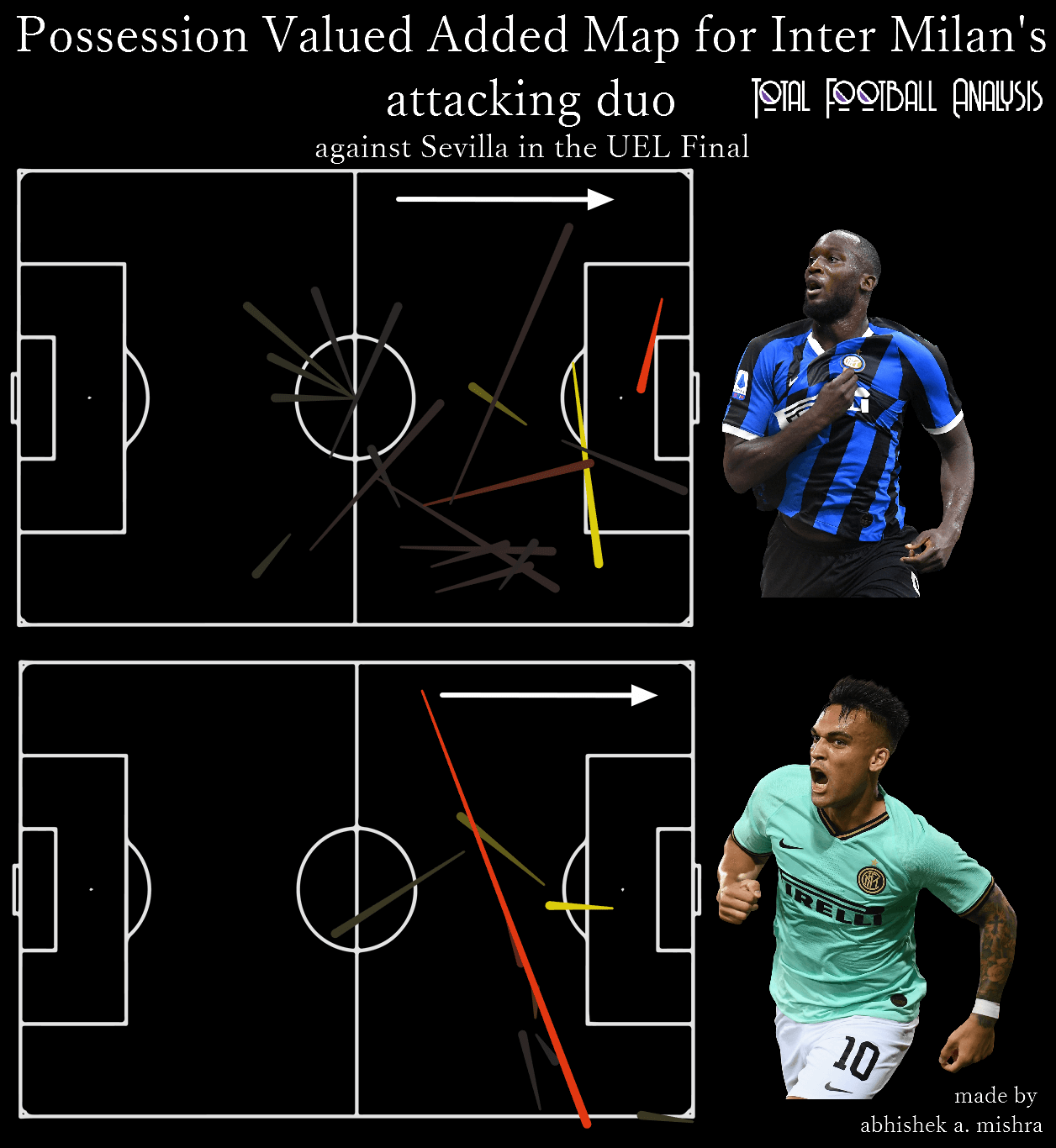 Here is one such PV map for Inter Milan’s attacking duo. Coach Antonio Conte lined up Milan in a 3-5-2 and gave main attacking responsibilities to Romelu Lukaku and Lautaro Martínez. Here, I have plotted their passes and shown PV in the colour of their pass.

The more red a pass, the more dangerous it is – it increased Inter Milan’s chance of scoring. Yellow passes indicate the opposite – decreased chances of scoring.

Lukaku, while having an excellent game in terms of scoring, had a somewhat isolated game in his passing. As the graph shows, he only had one really dangerous pass and that too was unsuccessful. Counting Lukaku’s successful passes and summing his PV for each pass we get a value of -0.0013 which basically means that Lukaku’s passes had zero to negative effect on aiding Inter Milan’s chance of scoring.

In essence, Lukaku’s passes really did not help Milan in scoring.

Lukaku’s partner, Lautaro Martínez, had an even more isolated game. With only four successful passes out of nine, Martínez’s role as the attacking midfielder-cum-second striker was really limited. This theme shows up in his PV as well as we see he only had one really dangerous pass and that was a cross-field pass. Taking his successful passes and summing the PV, we get a value of -0.0986 which implies a negative effect on Inter Milan’s chances of scoring a goal.

Combined, the duo had a negative PV score which is one of the reasons that Conte’s Inter Milan ended up losing the match. If your attacking force is not really dangerous than eventually, the opponent is going to realize that and use it to attack with more intent.