On the 7th of September, Everton completed the signing of James Rodríguez among much fanfare and high expectations. It was truly something special and never have the Toffees signed someone of his calibre before and playing in their prime. Along with James, they also drafted in central midfielders Allan from Napoli and Abdoulaye Doucouré from the recently relegated Watford to spice up their central midfield. It signifies how serious they are about their aspirations to reach the Champions League under Carlo Ancelotti.

This article focuses on the data analysis of the midfield options present at Everton currently for Ancelotti and uses data and statistics to show why the Italian wanted a revamp in this particular department. Let’s begin the analysis.

Carlo Ancelotti in his first full season decided to bring in some refreshing changes to his midfield. Having assumed duties midway last season, Ancelotti set up predominantly in a 4-4-2 / 3-5-2 with midfielders Tom Davies and Gylfi Sigurdsson featuring most of the time. The likes of Fabian Delph and Morgan Schneiderlein also played a few matches rotating with Davies and Andre Gomes returned from his injured spell to claim the attacking midfielder role from Sigurdsson.

Despite having a decent set of players in the midfield department, Ancelotti felt that he needed much more experience and quality to his first 11 as he felt the already present members were not up to his desired standards. This prompted the Everton management to go out for Abdoulaye Doucouré, who followed his ex-teammate Richarlison in making a move from Watford to Everton to replace the departing Schneiderlin.

Ancelotti also wanted some trusted faces and players who he has closely worked with in his previous spells at Napoli and Bayern Munich. He made Rodríguez and Allan top priority signings with the former a clear depiction of Ancelotti’s pull power to bring elite talent to a mid-table club. With the arrival of those players, Everton’s midfield looks to be among the best in the league both in terms of quality and depth. Let’s get into the data analysis. 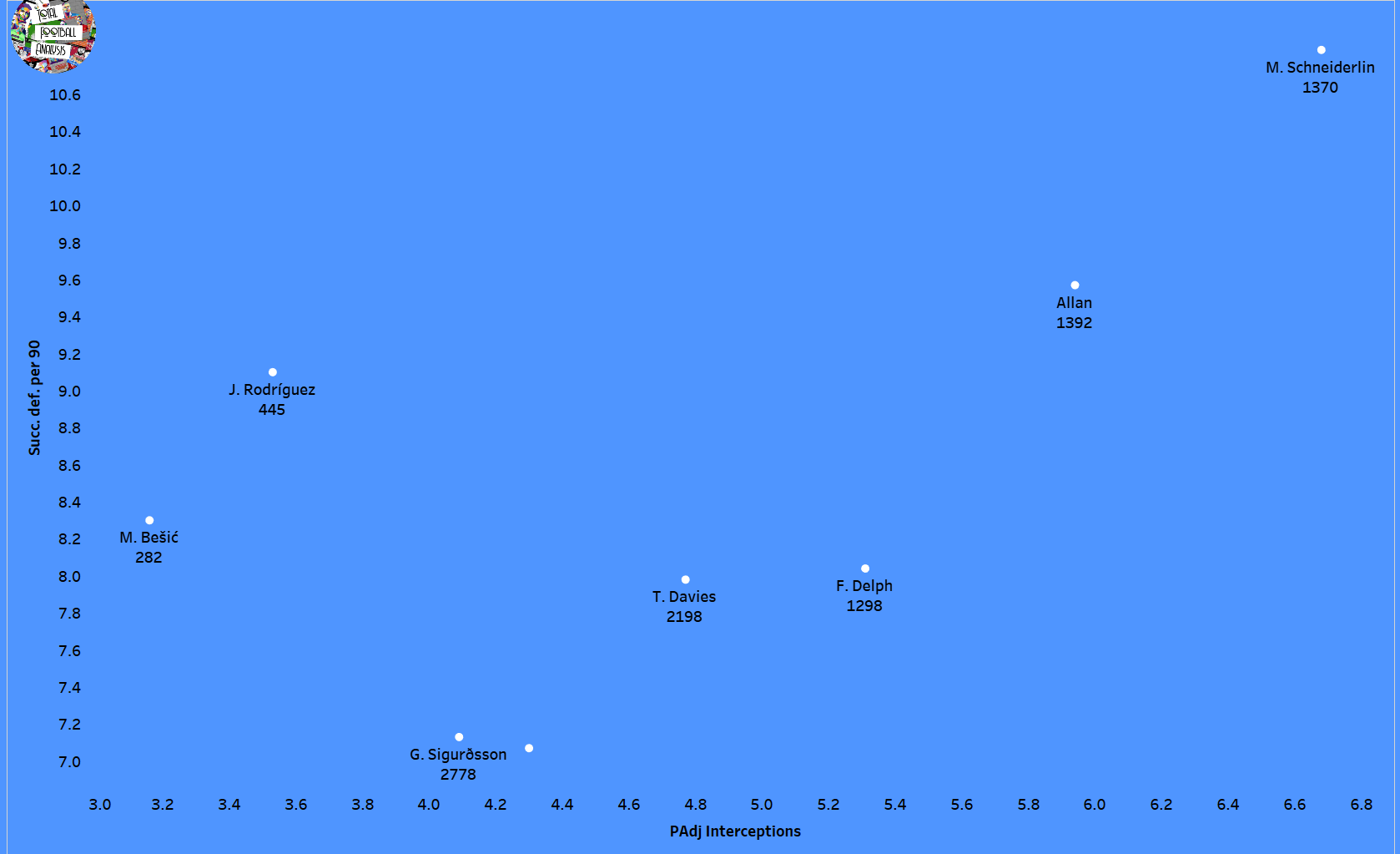 When compared with that of Allan, we can see a stark contrast between them as Allan recorded 9.57 successful defensive actions and 5.94 interceptions per game. He outperforms both of them and is only bettered by Schneiderlin last season.

When compared with all of the midfielders from Europe’s top 5 last season, only Allan and Schneiderlin averaged above the median. Despite Schneiderlin playing well defensively, he lacked the edge in the other departments, especially in attack, which we will see later in this article. 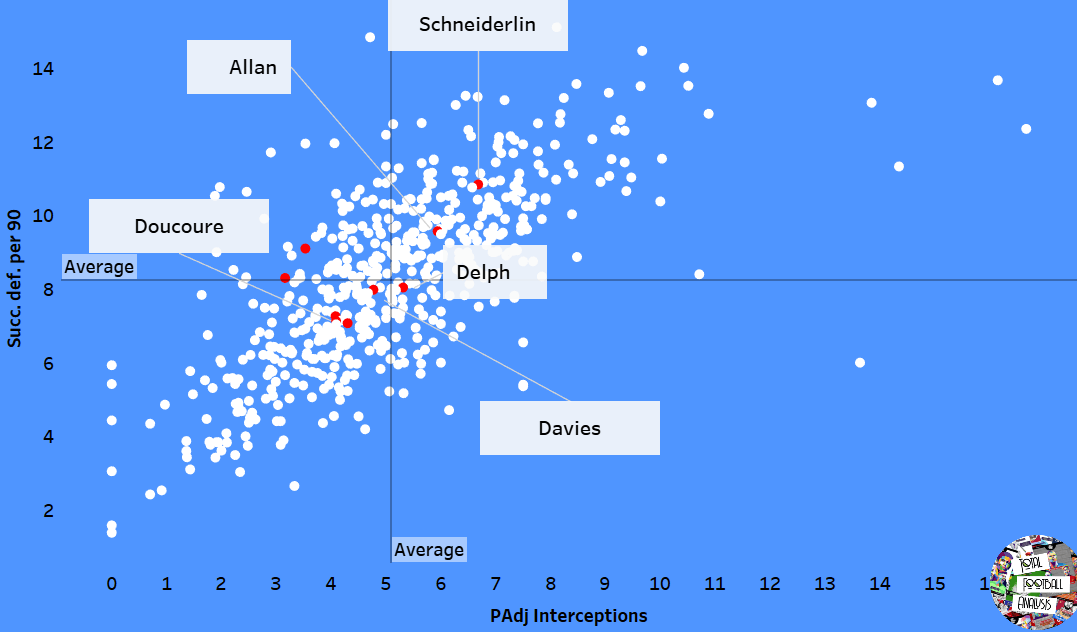 Winning duels is another important aspect of Ancelloti’s midfield system. At Napoli, he had Allan who was very good in performing the dirty work and also at teams like Real Madrid and Bayern Munich, he had someone like Sami Khedira and Arturo Vidal respectively to do this job. 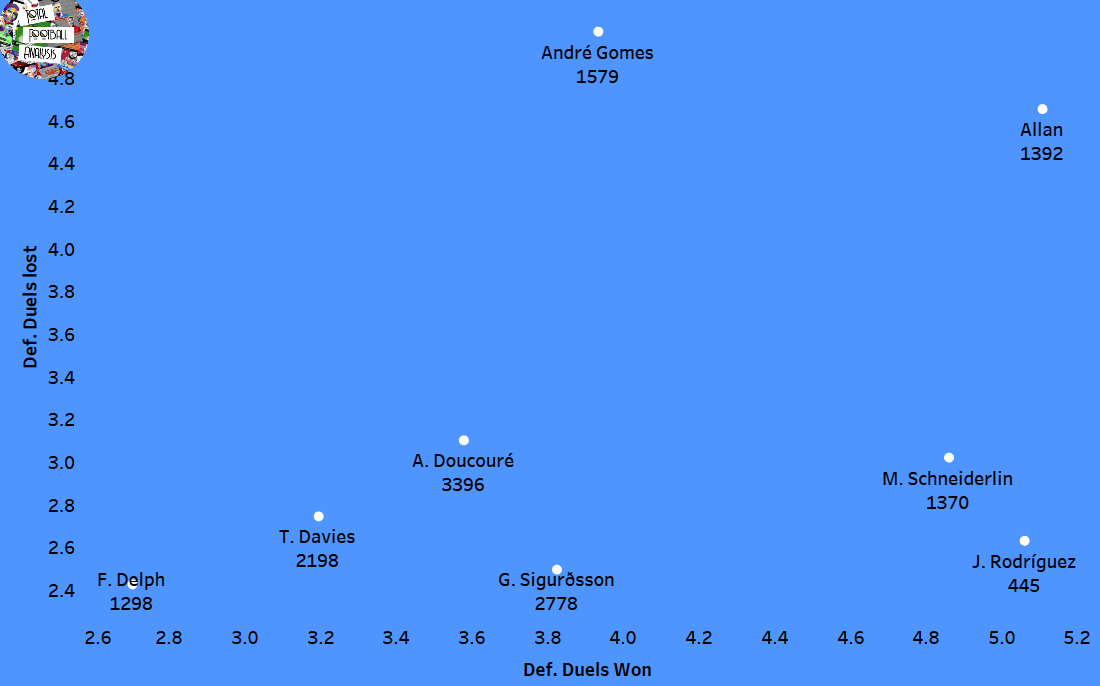 We can see Allan seems to be an outlier concerning the number of duels won (5.1) and lost (4.65) also finding himself in the top half among Europe’s big 5 league midfielders. It shows that he engages in a lot of physical duels that have seen him lose some but then he has also managed to win more than 50% of them.

Schneiderlin is again impressive in this regard as he has managed to win more than 4.86 duels and has lost only 3.02 per game. His duel win rate also stands at 61.6%, which was the best among the Everton midfielders. Again, we can see Delph and Davies having won very few duels and on top of that, they have attempted even fewer while the likes of Gomes have lost more duels than they have won, showing the reason why Ancelotti wanted Allan due to his dynamism and mobility.

Comparing that with other European top 5 league midfielders, Allan comes out on top and has one of the best statistics, as can be seen in the image below. 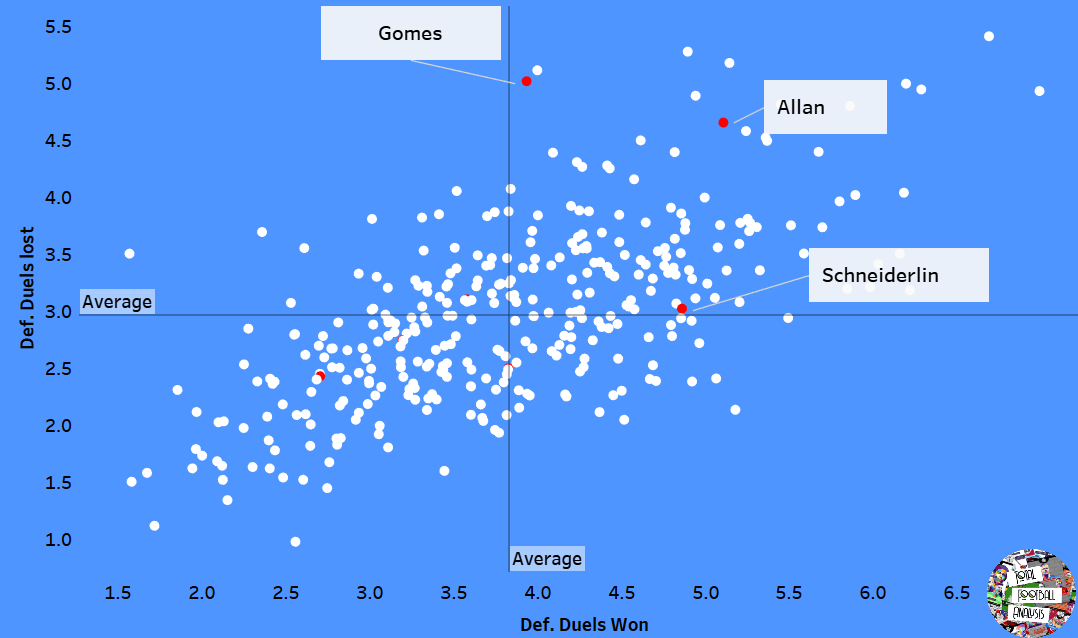 In the modern-game, the midfielder’s role in build-up play of a team is very important. Unlike in the old days when midfielders were the ones who had to drop deep to start the initial phase of build-up play, centre-backs are now actively involved here and hence the midfielder’s job has become much more complex in taking the ball into the final third and being very progressive.

Ancelotti, like any modern manager, likes to play out from the back and for that, he needs a midfielder who is pretty good on the ball. 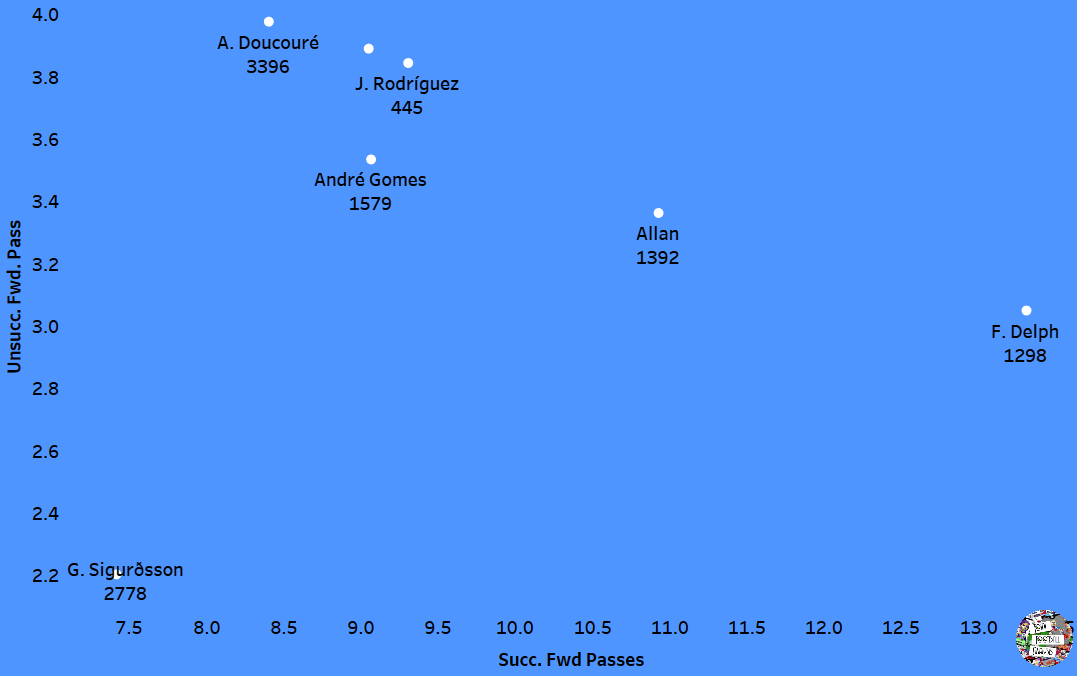 While Doucouré has lower forward passing accuracy, this could be again due to his previous spell at Watford, a team that does not keep possession for longer periods and plays a more direct style of football. Gomes seems to have similar stats to that of Rodríguez with both having similar accuracy of 71.95% and 70.77% respectively. 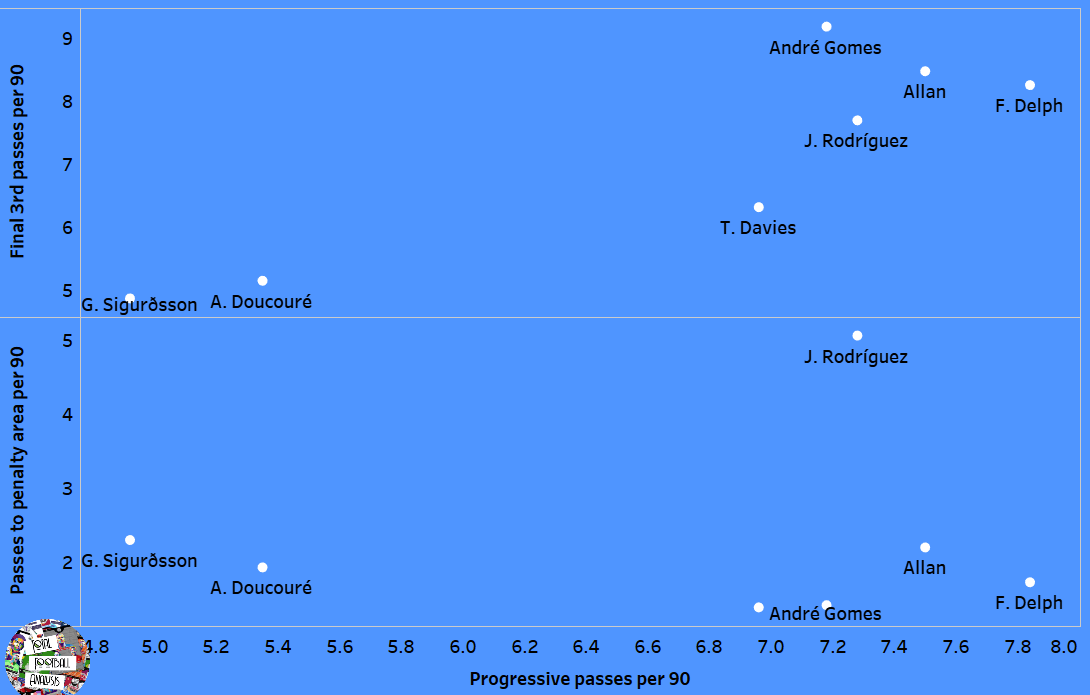 A deep analysis of their ball progression into the final phase of play gives us another good reason why Allan was bought. He has averaged 7.5 progressive passes, 8.47 passes into the final third and 2.2 passes into the penalty area per game. While only one player in each category outperforms him, Delphin terms of progressive passes (7.84), Rodríguez in terms of passes into the penalty area (5.06) and Gomes in final third passes (9.18), the likes of Davies, Delph and Gomes have significantly underperformed when compared to Allan in all of the categories.

Doucouré, on the other hand, is 4th behind the likes of Sigurdsson, Rodríguez and Allan in attempting passes into the final third (1.93). This shows that he was deployed in a far advanced role at Watford, playing close to the forwards and being actively involved in the final third.

Ancelloti’s has always preferred to have an out and out attacking midfielder along with one defensive midfielder and a box-to-box one. At Real Madrid, he had Angel Di Maria and at Bayern Munich, he deployed Thiago Alcântara in a more advanced role.

Also, he expects creativity from his wingers, as was the case with Frank Ribbery and Arjen Robben back in the day. This prompted him to buy Rodríguez to reunite with the Columbian at the 3rd different club as he felt the likes of Alex Iwobi and Theo Walcott were not up to his standards. 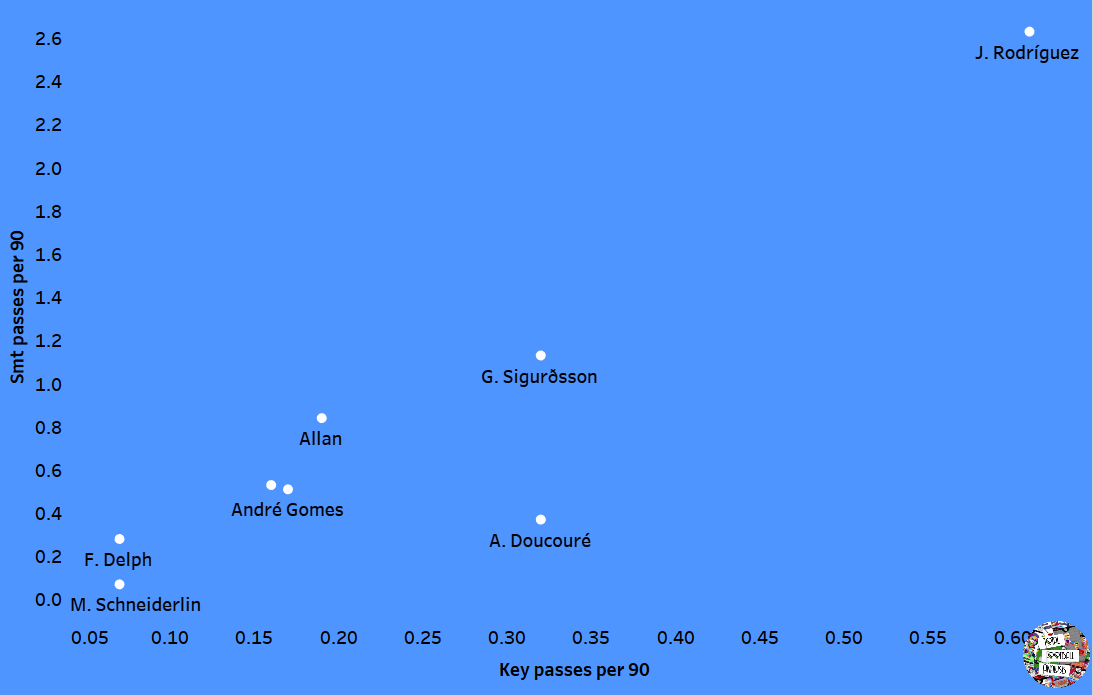 We also spoke highly of Schneiderlin’s defensive contribution. Well, it’s clear here why Ancelotti didn’t prefer him to Allan as he falls short of the Brazilian (0.84 smart passes and 0.19 key passes) in providing the much-needed creativity required for the team. Among the other defensive midfielders, Davies averaged much better stats, closer to that of Gomes while Delph, with 0.28 smart passes and 0.07 key passes, outperformed the Frenchman again. Doucouré seems to be a player who rather deploys passes that directly contribute to goals than passes that break lines during the buildup. This has seen him record 0.32 key passes and 0.37 smart passes, unlike others who have attempted a much higher number of smart passes than the key pass.

When we analyse the dribbling and the progressive runs stats, we can get a better understanding of what Doucouré brings to the team and his style of play. From the chart, we can understand that he dribbles a lot and likes to carry the ball as well. Due to his athletic ability which helps him while dribbling, he has recorded 1.19 successful dribbles and 1.34 unsuccessful ones. Though he has lost more than 50% of his dribbles, he still likes to attempt them and carry the ball which again reflects in his progressive runs per game as he averages 1.54 runs per game. 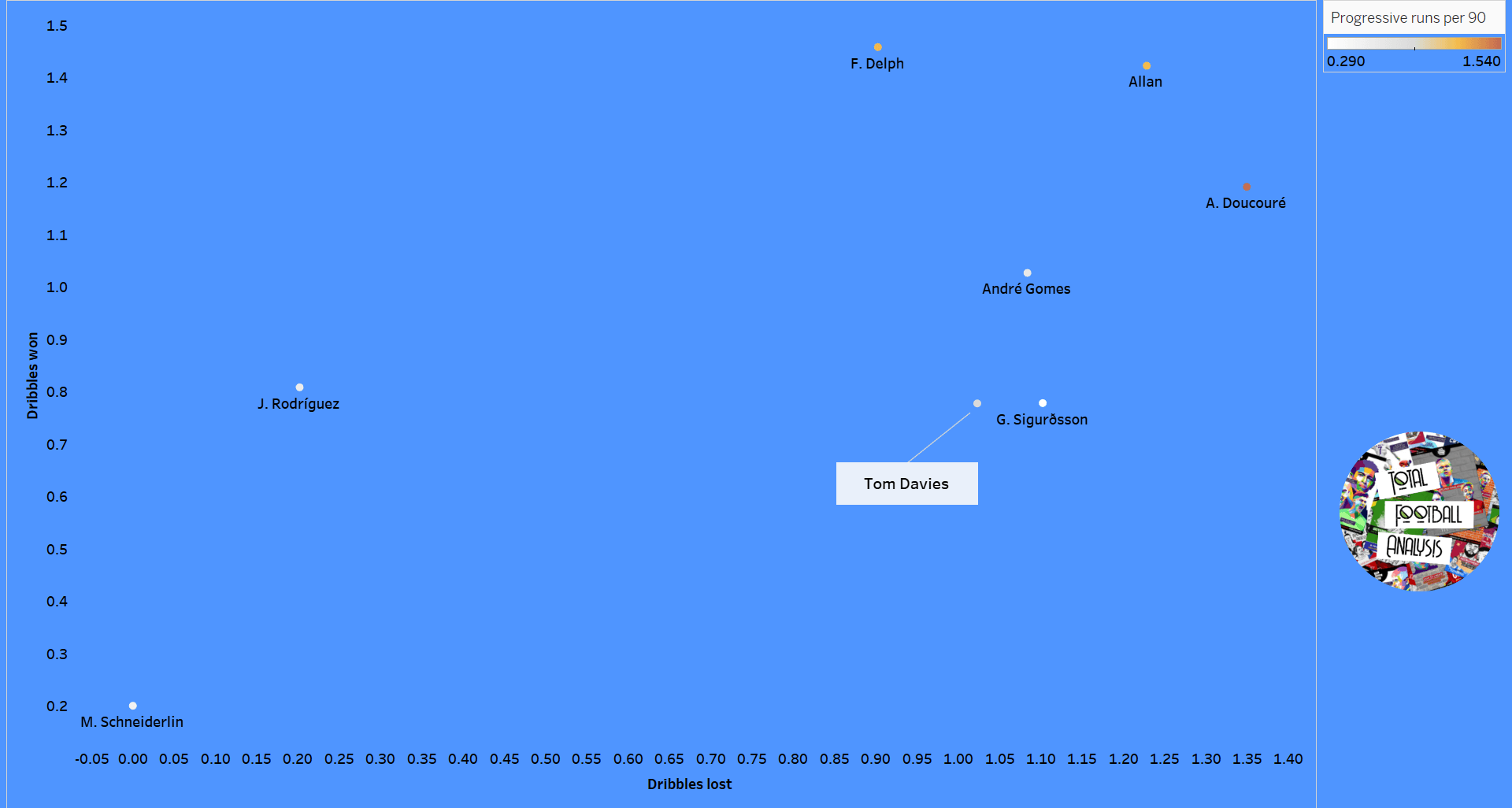 Rodríguez seems to be the most efficient dribbler in the squad as he has won 0.8 dribbles per game at a rate of 80.6%. Again Allan and Delph seem to have performed well in terms of dribbling and are all-around (versatile) when compared to Schneiderlin, who again seemed to be the worst-performing midfielder among the lot in this category.

It also shows that both Delph (63% dribble success rate) and Allan are press resistant as they can glide past the opponent’s intense pressure when they play out from the back.

Goal Contributions and presence in the box 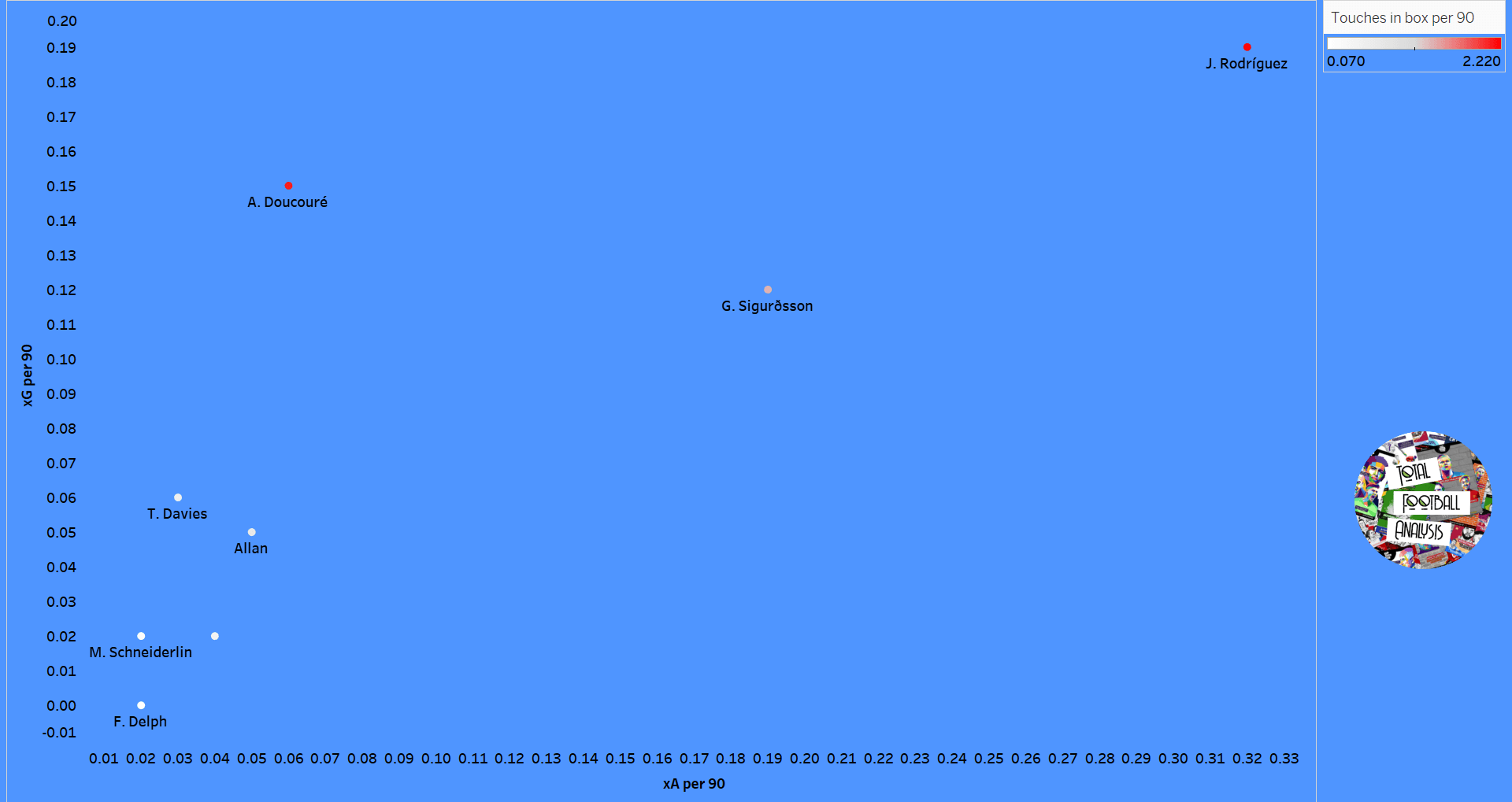 Again, Rodríguez seems to be the outlier with an xG of 0.19 and xA of 0.32 per game. This stat would be even higher if he played regularly, especially under a manager who knows him well. He also attempts 2.22 touches inside the box.

The next influential player in the penalty area among the Everton midfielders is Doucouré who averages 0.15 xG and 0.06 xA per 90. Also, he records 2.04 touches inside the box, as he was given the freedom to march into the opposition box during counter-attacks. Following him is Sigurdsson who, being a playmaker, has an xA of 0.19 and xG of 0.12.

The system used so far

In the opening two matches so far this season, Ancelotti has gone with a 4-2-3-1 formation which will be his preferred system going forward. It seems to be the perfect system to accommodate the likes of Rodríguez  (RW), Gomes (CAM), Doucouré (CDM) and Allan (CDM). While Rodríguez starts as a right-winger, he effectively tucks inside to make the formation more or less a 4-2-2-2.

Allan and Doucouré have seamlessly adapted to their CDM roles with Doucouré seeming to be playing in a much deeper position. The image below shows the passing network of Everton against Tottenham Hotspur in their opening game. 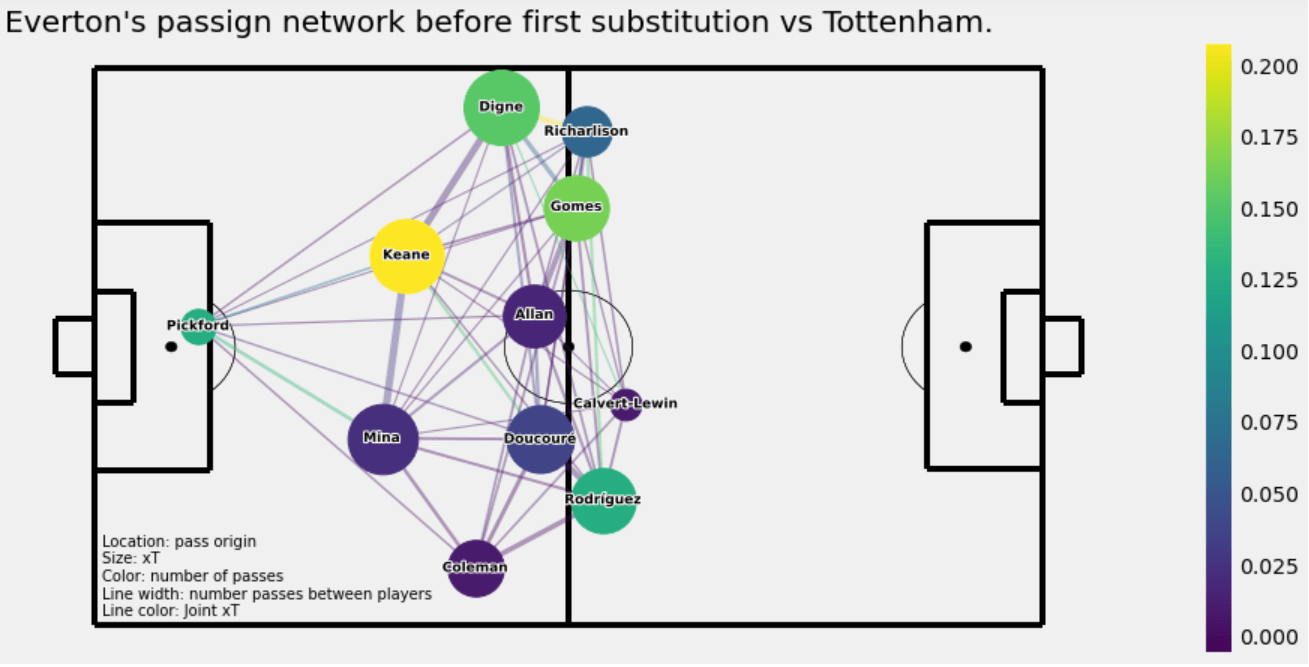 The shape is effectively a 4-2-3-1 with Richarlison as a left-winger and Rodríguez in the right-wing. The colours of each node correspond to the danger they created with their passes. We see that most of their dangerous plays come from the left side where Gomes goes out to combine with Lucas Digne and Richarlison.

While the onus is on Rodríguez to create from the right side, this system was a one-off as we can see their pass network in the match against West Brom in the image below.

This is more or less a 4-2-2-2 with both Gomes and Rodríguez tucking inside and Richarlison playing as a forward along with Dominic Calvert-Lewin. The full-backs have pushed higher to provide the width while the CDMs stay deeper to provide the defensive cover. The actual lines are shown in the image below. 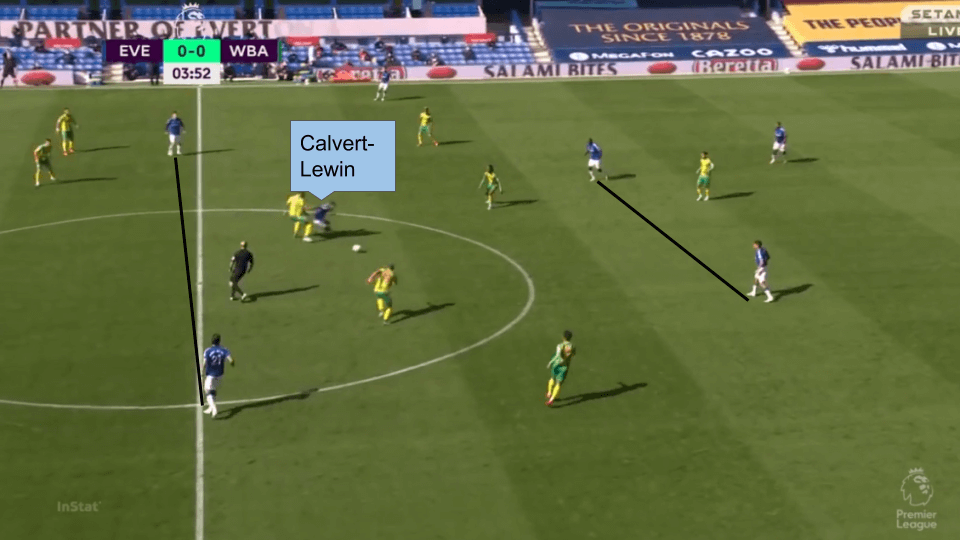 The first line has Rodríguez and Gomes tucking inside centrally and the second line has Doucouré and Allan playing in the deep midfield role together.

Everton has had a great start to their Premier League campaign with two wins on the trot that include a win against Spurs on the road. Ancelotti’s men will be looking to go all guns blazing with their new look midfield this season and will surely be aiming for a top-four finish this season with a good squad that has very good depth. 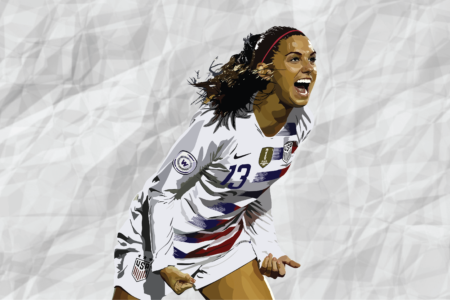 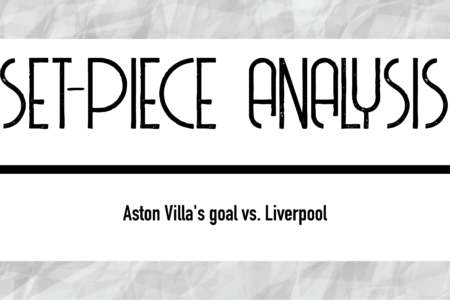 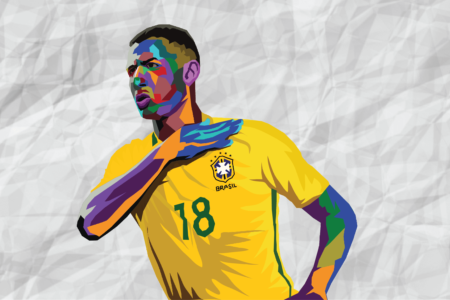 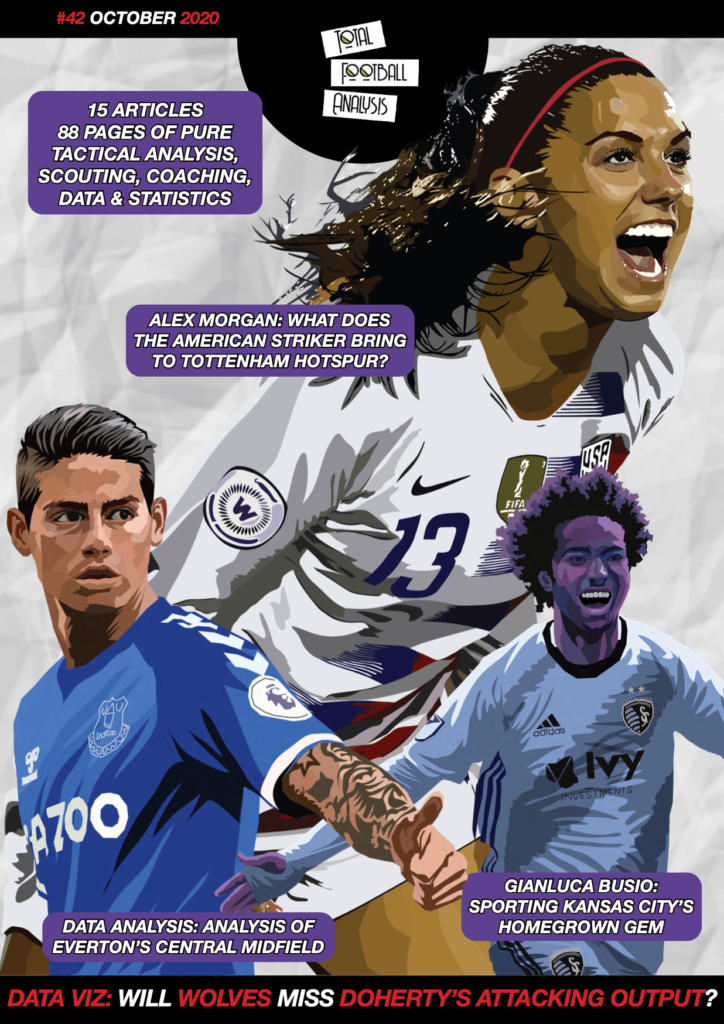