The first match of the new Serie A Women’s season for Milan and Florentia was played on Sunday 23, August in hot weather at Centro Sportivo Peppino Vismara, Milano.

The game ended with a Milan win that will serve in their long chase after teams like Juventus and Fiorentina who have both won respectively against Verona and Inter.

It was a match that witnessed various chances, especially from Milan while Florentia struggled to reach Milan’s penalty area due to the extensive high pressing from their opponents which drained their energy. But overall, the level of the game was not as high as expected as we did not see an impressive performance from Milan who are looking for Champions League qualification. Also, weather conditions and the long stop caused by the pandemic lowered the rhythm of both teams.

A full and comprehensive analysis of this game will be provided below to explain the tactics and plans of both teams during this game while also pointing out the most influential players of this match.

This tactical analysis will be divided into three parts. First, we will present both teams’ lineups and the tactical choices that both managers adopted for this encounter, then, a meticulous study of the first and second-half chances and tactical organization of the two teams will be provided before picking out the best players during this game.

Maurizio Ganz, Milan’s manager, chose to start with a 4-3-1-2 formation relying on Mária Korenčiová as a goalkeeper, Laura Agard and Laura Fusetti as centre-backs, leaving Giorgia Spinelli on the bench, and using Valentina Bergamaschi and Linda Tucceri as full-backs who often move forward to support the attack.

In midfield, Milan played with Refiloe Jane, Dominika Čonč and Christy Grimshaw as a deep-lying midfielder, right midfielder, and left midfielder, respectively. Ahead of them, Miriam Longo played as a trequartista behind Valentina Giacinti and Natasha Dowie, the team’s forwards.

Concerning Florentia, the team played with a 4-3-3 formation composed of Amanda Tampieri as a goalkeeper, a defensive line made up of  Serena Ceci and Giulia Bursi as full-backs and Elena Pisani and Tamar Dongus as centre-backs.

The team played with Cecilia Re, Giulia Bardin and Francesca Imprezzabile in midfield who was subbed off during the first half due to injury for Irene Lotti. Then the two wingers Luisa Pugnali and Melania Martinovic played on both wings to support and provide Sofia Cantore, the team’s forward, with passes and opportunities.

The game started with Milan having more possession and creating chances regularly since they were pressing high on Florentia’s defence, resulting in them struggling to clear out the ball in an effective way, and even when they did so, they were not very concentrated when they had the ball in Milan’s half.

Milan were better organised in all phases in the first half as they had more possession of the ball and always tried to play on the wings relying on Bergamaschi and Tucceri’s accelerations who were then supported by Grimshaw and Giacinti. The latter usually moved to the left when the ball was with Tucceri, while on the right, Čonč and Dowie were always giving passing options to Bergamaschi.

You can see in this example how Milan’s pressing was high on Florentia’s defenders and caused many problems for them especially in the first half since Milan had the most dangerous goal-scoring opportunities during this half. 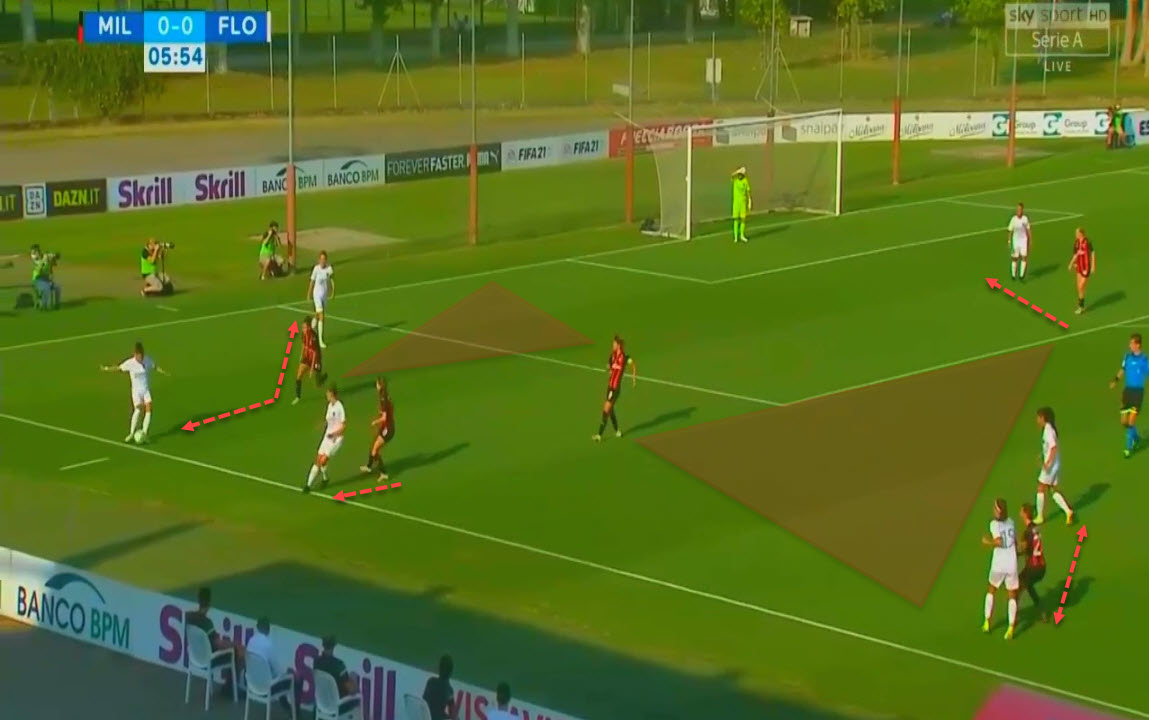 The first goal was scored for Milan after several missed chances from Giacinti and Dowie, and it was scored however by the team’s trequartista, Longo. The start of the action was due to a wrong pass from Barin which was grabbed by Čonč who passed a smart through ball to Dowie, who did not hesitate to let it go past her to fool her direct opponent and let the ball reach Longo who was waiting without marking right behind Dowie as shown in this picture. And the rest is a successful finish by Longo. 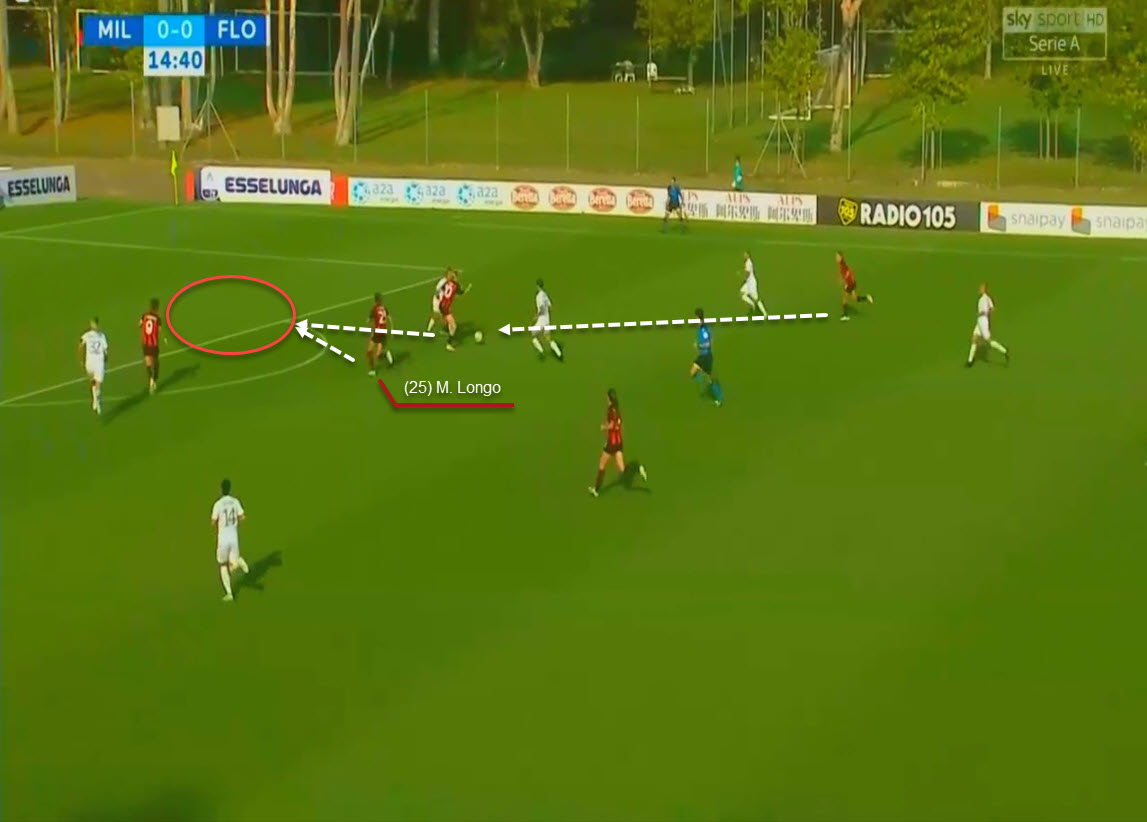 During this first-half, even though Florentia’s players did their best to overcome Milan’s pressure, they were unable to play some accurate passing combinations when they moved forward. That left Cantore alone in the attack and unable to receive neither passes in a dangerous position nor support from the rest of the players. Florentia’s midfielders and wingers struggled to keep hold of the ball and lost it in almost all attacking actions.

This led to more tackling and fouls from Florentia’s players since they couldn’t win possession easily and even when they did so, they were not able to do something concrete with the ball except some passive passes or through passes that were inaccurate.

Even their pressing attempts were not successful because Milan were well organised in the build-up and did not get affected by high pressing, mainly by resorting to both full-backs when the ball was with Korenčiová. And even when the full-backs were marked, defenders crossed the ball to Jane, Čonč, Grimshaw and at times Giacinti who were also providing options when Milan were pressured, like in this example. 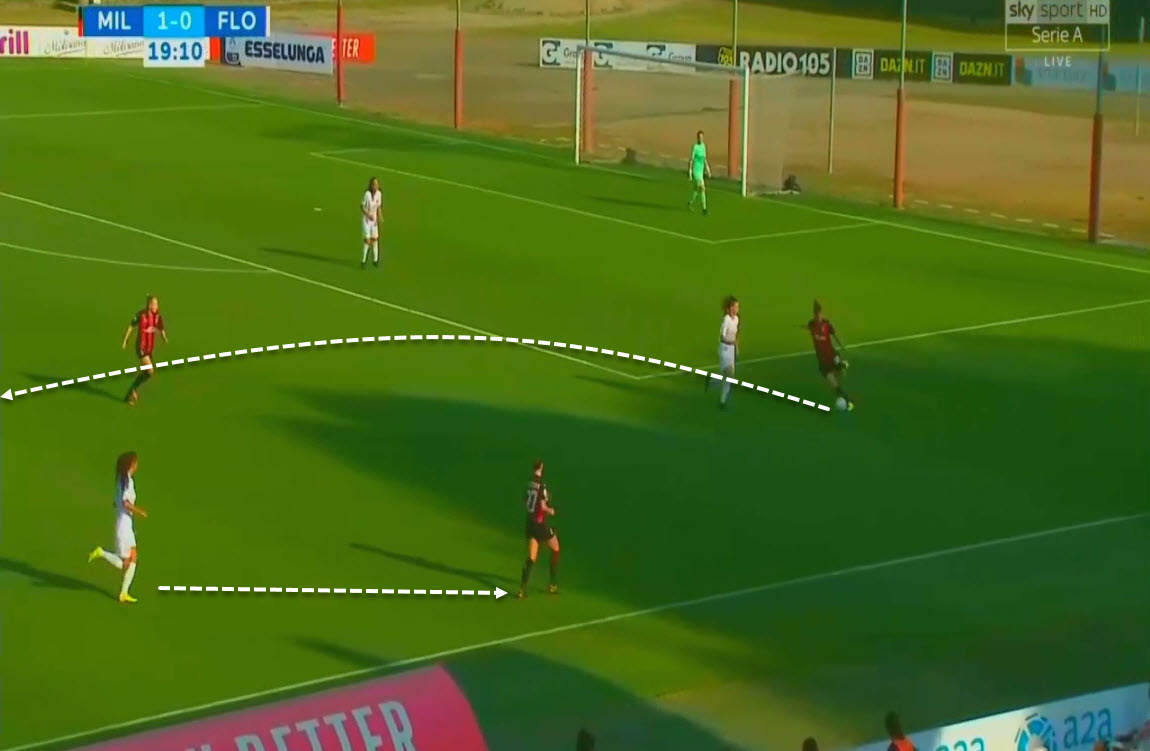 However, in attack, Milan’s forwards were distant from each other and did not create passing combinations together. Instead, all that was done was either crosses from Giacitni to Dowie which were usually imprecise or intercepted, or individual dribbling and then shots from one of the two.

This resulted in a lack of chances, especially after the first goal. That’s why this point needs to be considered by the coaching staff. Mainly in order to create more chances against tougher teams and exploit the existence of strikers like Giacinti and Dowie in a better and more effective way by creating combinations between the two and making them play more together to break down defences.

Nevertheless, it is worth mentioning that Florentia were solid defensively during the whole match and marked both Dowie and Giacinti very well and limited the danger of their accelerations and did not leave them alone only on a few occasions, therefore, the credit goes to them as well even though they lost the match. 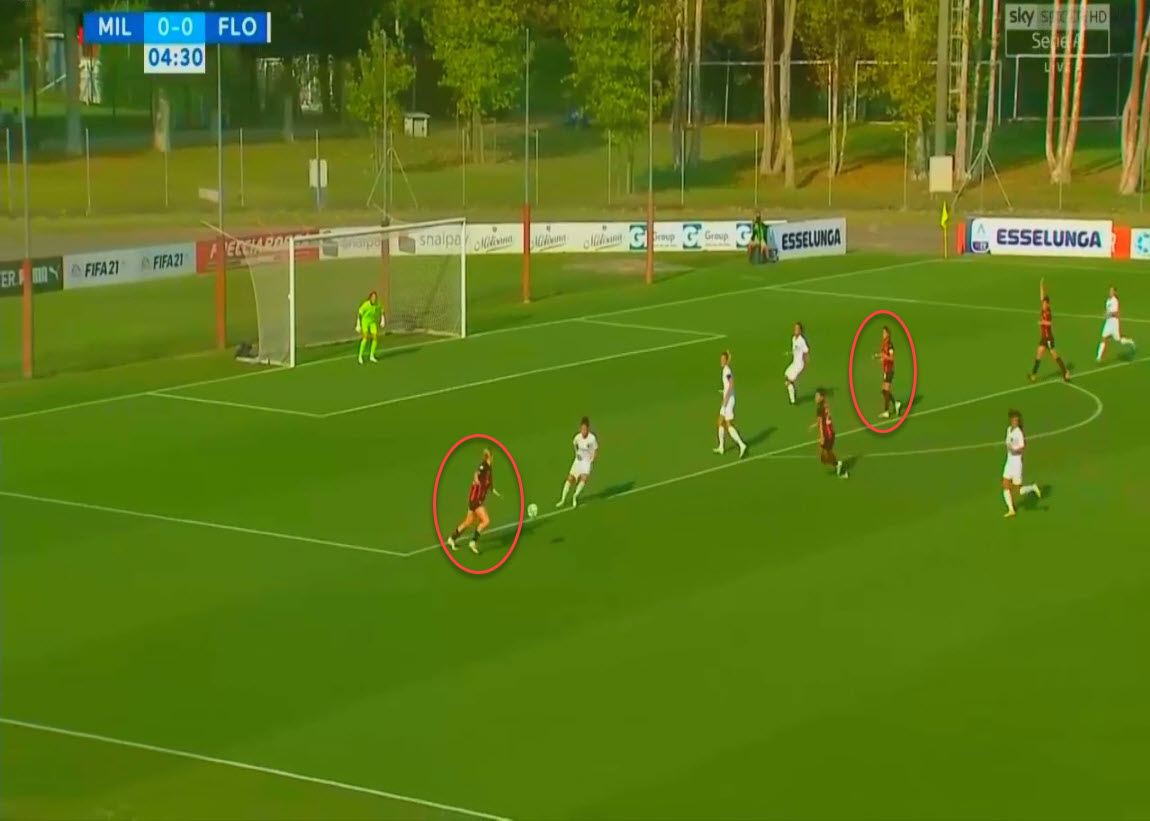 Affected by fatigue, players of both teams did not create many opportunities during the second half and the game started to become centralised in midfield with a lot of fouls for both sides, and with many changes from both teams.

During this half, Florentia did not exploit the few chances they had accurately, also, lack of concentration and lack of passing accuracy made them unable to threaten Milan. Even in a chance like the one in the image below. Pugnali had two passing options that could have been very dangerous, either by passing to the player at her right who could then cross it to Martinovic or pass it directly to Martinovic in the back of defence to give her a face to face opportunity with Milan’s goalkeeper.

Instead, Pugnali passed a non-precise ball to her teammate at the right-wing who was only able to collect it near the corner, allowing the whole Milan team to return to their positions and therefore miss an equalising chance. 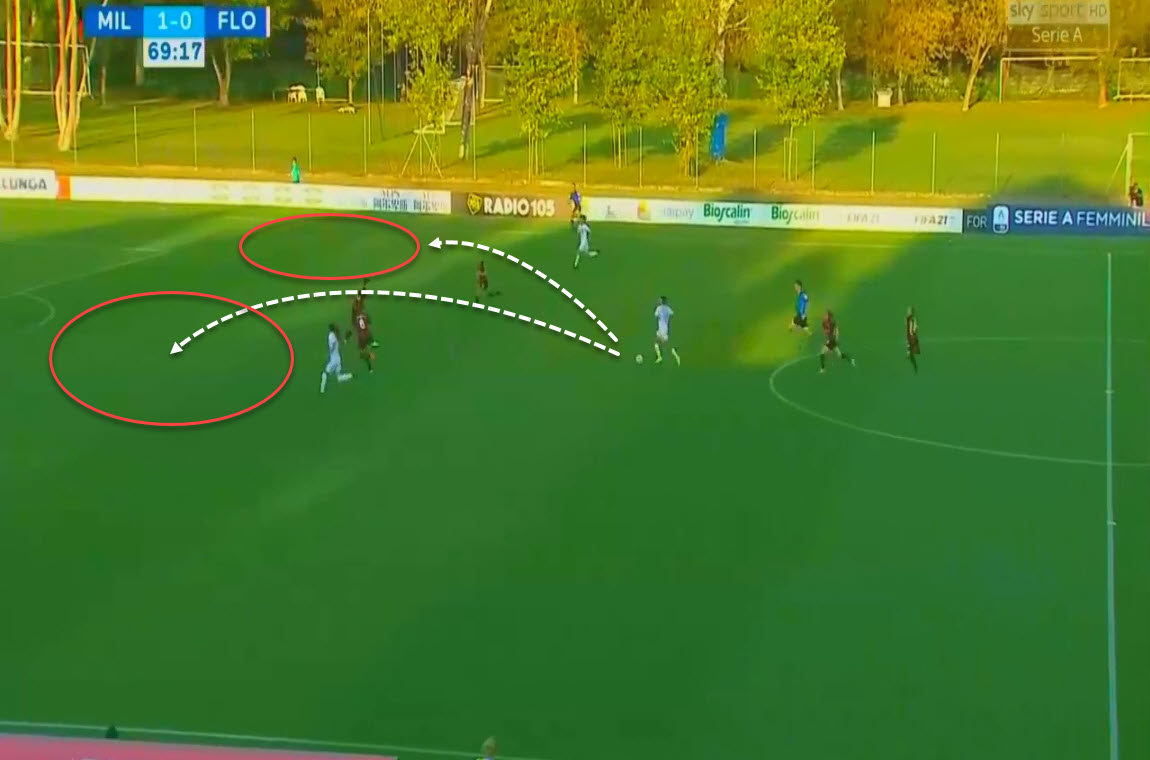 Throughout the second half, Milan kept their high pressing until the last minutes of the game, which made Florentia’s players lose a lot of energy to get away from pressure in their own half and then when they reached Milan’s half mistakes occurred mainly because of the quality of players and the experience of Milan’s centre-backs, and also due to fatigue.

Milan’s substitution of Sara Tamborini who replaced Christy Grimshaw gave more dynamism to Milan’s midfield and enabled Giacinti and Dowie to receive more balls since Tamborini played very well with her feet and was consistent in her attacking support.

Yet, Milan players missed many chances during this half as well and they did not rely on concrete and specific attacking combinations or plans that could have helped them in creating one-on-one situations with the goalkeeper.

While for Florentia, the team did not exploit the fatigue of Milan and their inability to score a second goal, instead, they kept on missing the chances they had and just waited for Milan’s defensive mistakes. Which makes it obvious for the coach, Stefano Carobbi, to work extensively on enhancing his players’ final touch accuracy and passing choices in the penalty area.

As we said above, the level of the game was not as high as expected and players did not perform at their best, due to various reasons. However, some of them were better than the others and performed in a more impacting way.

For Milan, Longo who scored the first goal, did very well before she was substituted due to her injury. She was the one linking midfield to attack and was playing as a true trequartista and did her role properly. Also, Rask did play accurately when she replaced Longo even though she was playing as a deep-lying midfielder. She helped the team be more balanced after the injury of Longo.

It is worth noting, however, the excellent efforts put by both Tucceri and Bergamaschi on both wings. The latter for instance created the difference with her long and fast runs on the right flank. Even in the last minute of the first-half she made a long run past her direct opponents and reached the penalty area to then cross the ball and create a chance from nowhere. Luckily for Florentia, their defender Dongus was able to clear the ball away and prevent Milan’s strikers from scoring a second goal at a delicate time. 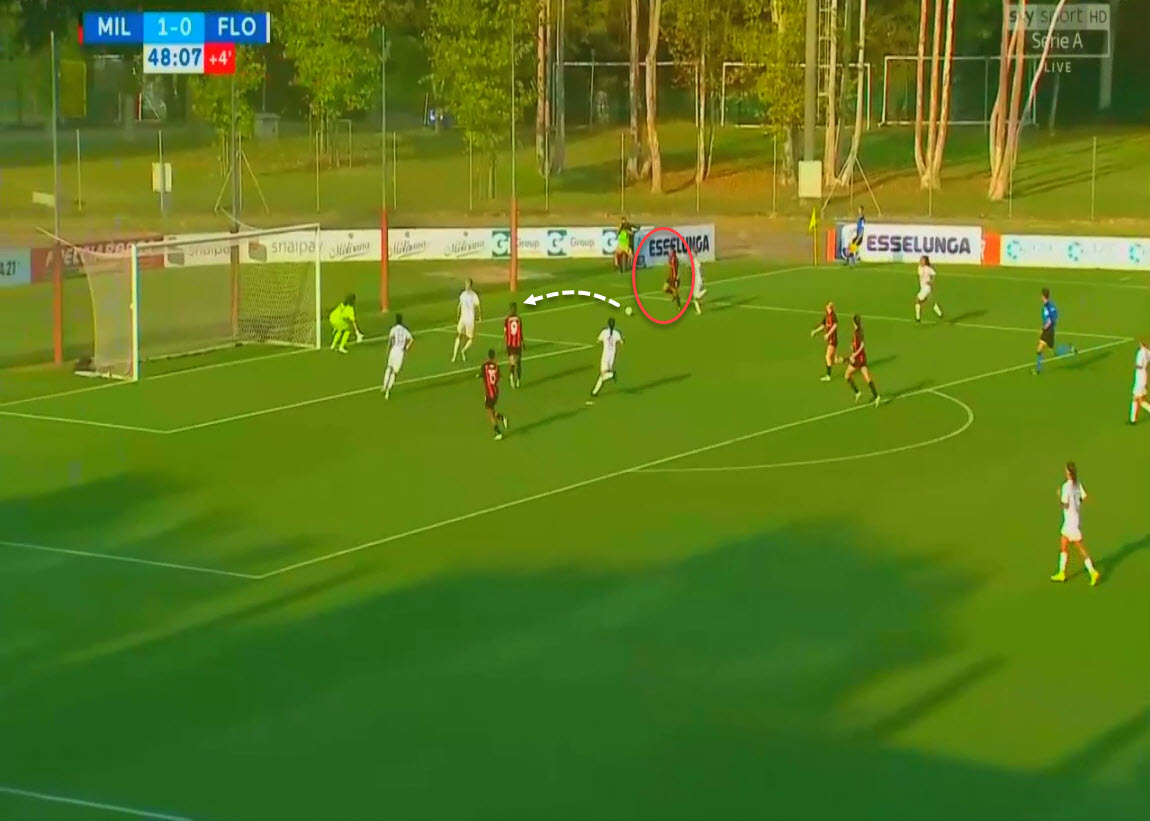 When it comes to Florentia, both Elena Pisani and Tamar Dongus did an impressive performance since they were successful in limiting the dangers of strikers like Dowie and Giacinti, committing only one mistake during the first goal. They were able to mark these two strikers throughout the game and separated them from each other, leaving Milan with only few options in the final third.

Also, Cantore did her best to disturb Milan defence but was not able to do more than that mainly because she did not receive many passes, neither in the back of defenders nor in another suitable position. Yet, her movements in the penalty area were remarkable and could have been fruitful if her teammates were able to pass the ball to her at the right times.

Moreover, Re, Lotti and Bardin were consistent throughout the match in their attempts of winning back possession and were not an easy opponent for Milan since they intercepted a lot of passes and made a lot of fouls to prevent Milan from advancing.

This result is very important for Milan to build on and reinforce it with further wins, however, many things need to be reconsidered and trained on in this Milan team, including improving the attacking movements in the final third and also working on passing accuracy in midfield and towards strikers.

For Florentia, this loss can only make the team more hungry for winning and can be considered as a motivation for the squad and for Stefano Carobbi to work on strengthening his team especially on the offensive side.