In the 15th match week of the 2020-21 Premier League season, Arsenal hosted Chelsea in an all-important London derby on the boxing day. The match was crucial to Arsenal as they languish in the 15th place after going on a winless run in their last 7 matches.

Chelsea, on the other hand, are themselves struggling to find some consistency in the league. Though they go into this game as the clear favourites out of the two teams despite not claiming a single win against the top-6 teams this season. This tactical analysis focuses on the tactics deployed by both managers. Let’s begin the analysis.

Mikel Arteta rung in the changes and brought some freshness and energy into the lineup. He brought in Martinelli, Smith-Rowe and Lacazette for Nicholas Pepe, Willian and Eddie Nketiah. David Luiz also made way for a returning Pablo Mari while Bellerin and Xhaka replaced Maitland-Niles and Ceballos respectively. 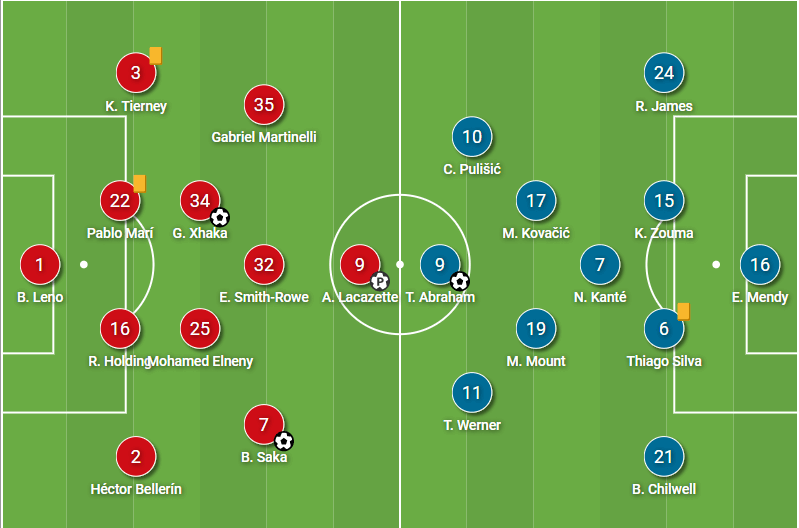 Chelsea went with an unchanged lineup that beat West Ham last Monday with Lampard’s men having an additional few days to recover due to absence of cup duties. He went with a 4-3-3 formation again with Werner again starting as a left-winger while Pulisic occupying the other wing.

When Smith-Rowe and Martinelli kept the Chelse midfield and defence engaged with constant runs and movement, it dragged the players and opened spaces for others to exploit. Particularly, in this example, Martinelli drags Reece James inside and Smith-Rowe occupying the left half-space meant that Tierney now has huge spaces in the wing to run down and deliver crosses. With both Pulisic and Kovacic ahead of the ball (higher up the pitch), James now was in a confuse situation whether to go out to press Tierney in the wing or track Martinelli into the box. 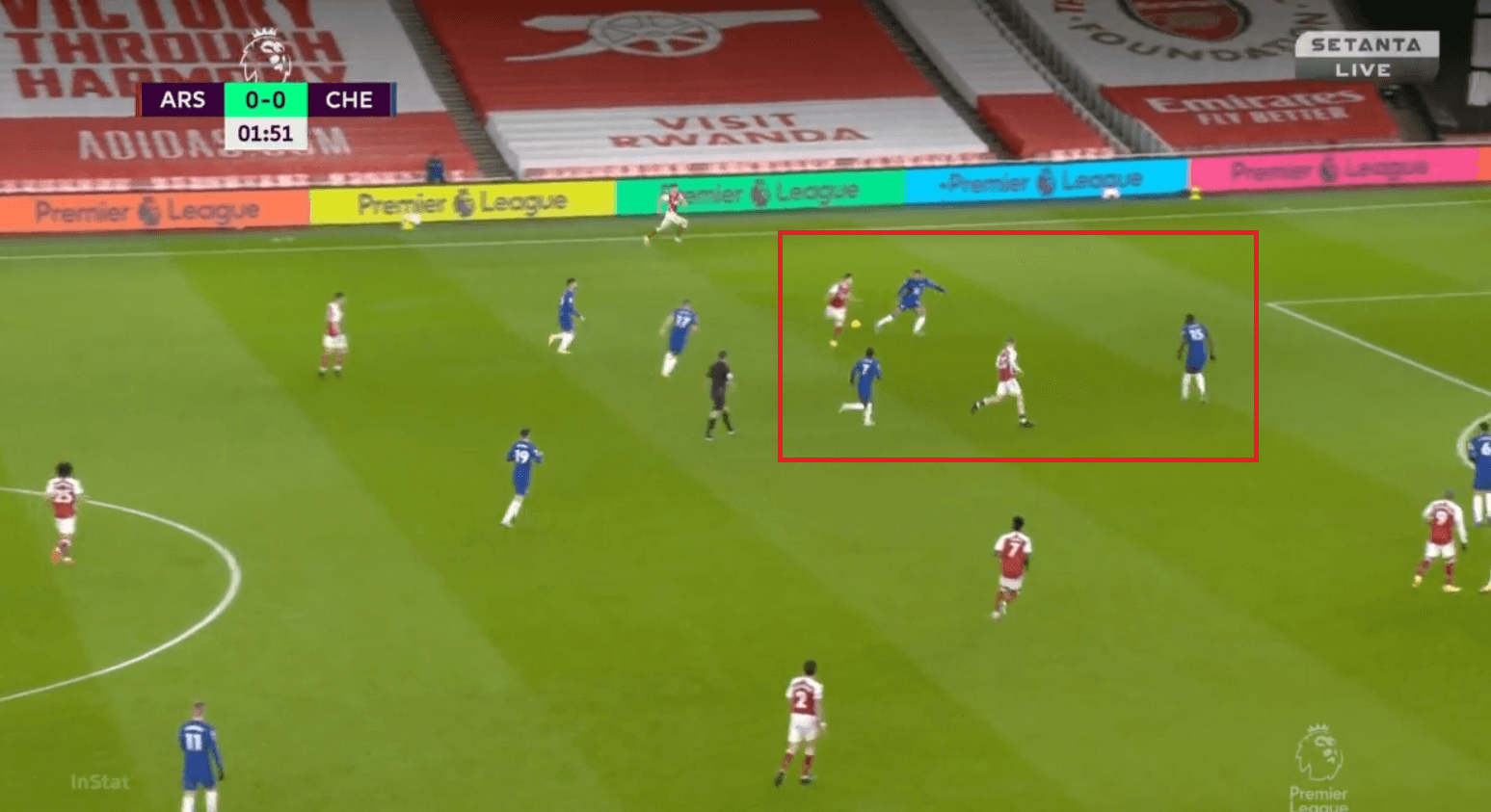 To make the structure symmetrical, Arteta aksed Lacazette to drop into the right half-space as Smith-Rowe did in the left. This made system into a 3-1-5-1 with Elneny or Xhaka dropping deep in between the centre-backs to efficiently outnumber the Chelsea forward line in the first phase. 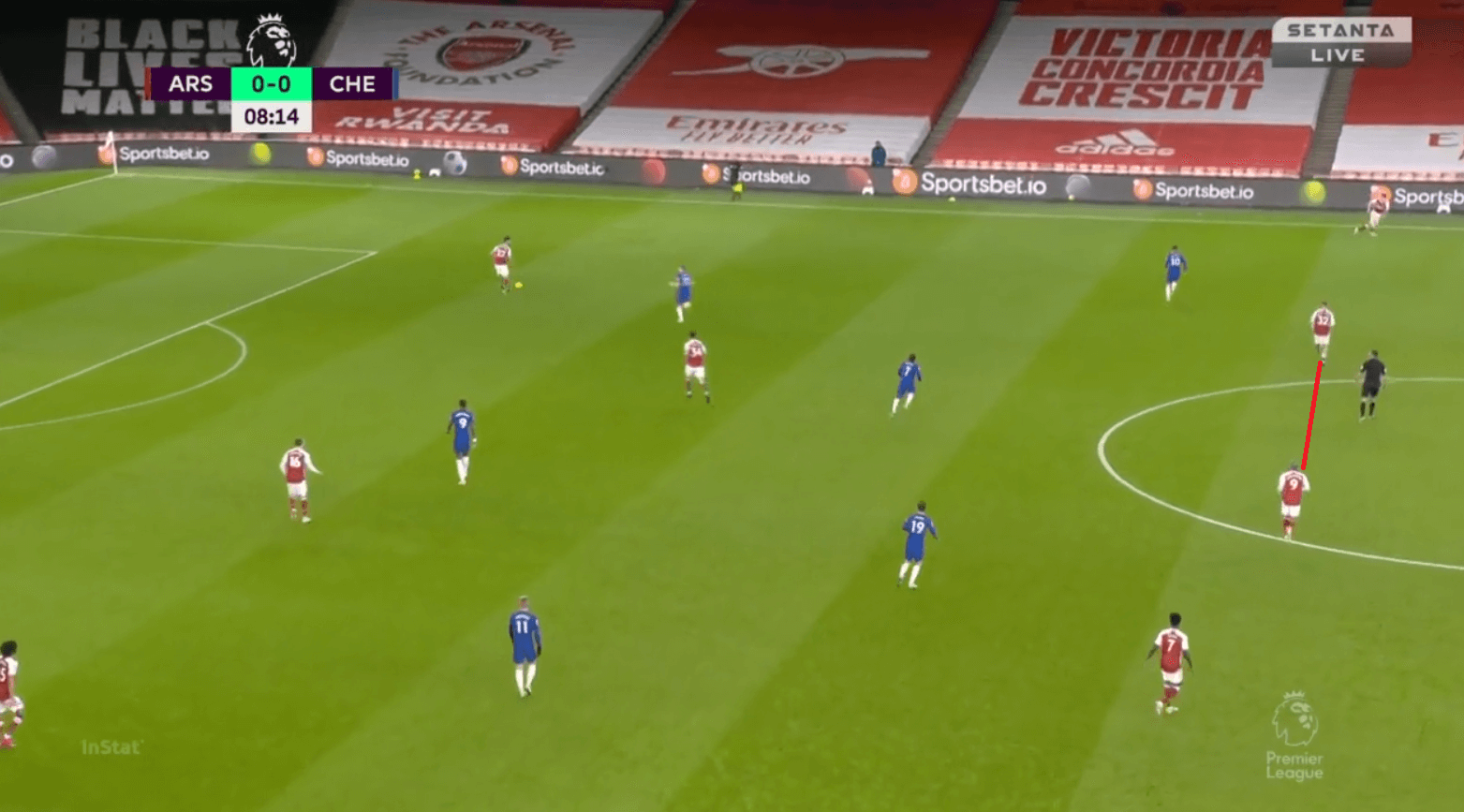 Another advantage of playing both Smith-Rowe and Martinelli is that they bring a unique blend of energy into this Arsenal side that the likes of Willian fail to bring. Both of them make these good runs in behind the defence and try to stretch the Chelsea defence at every opportunity. 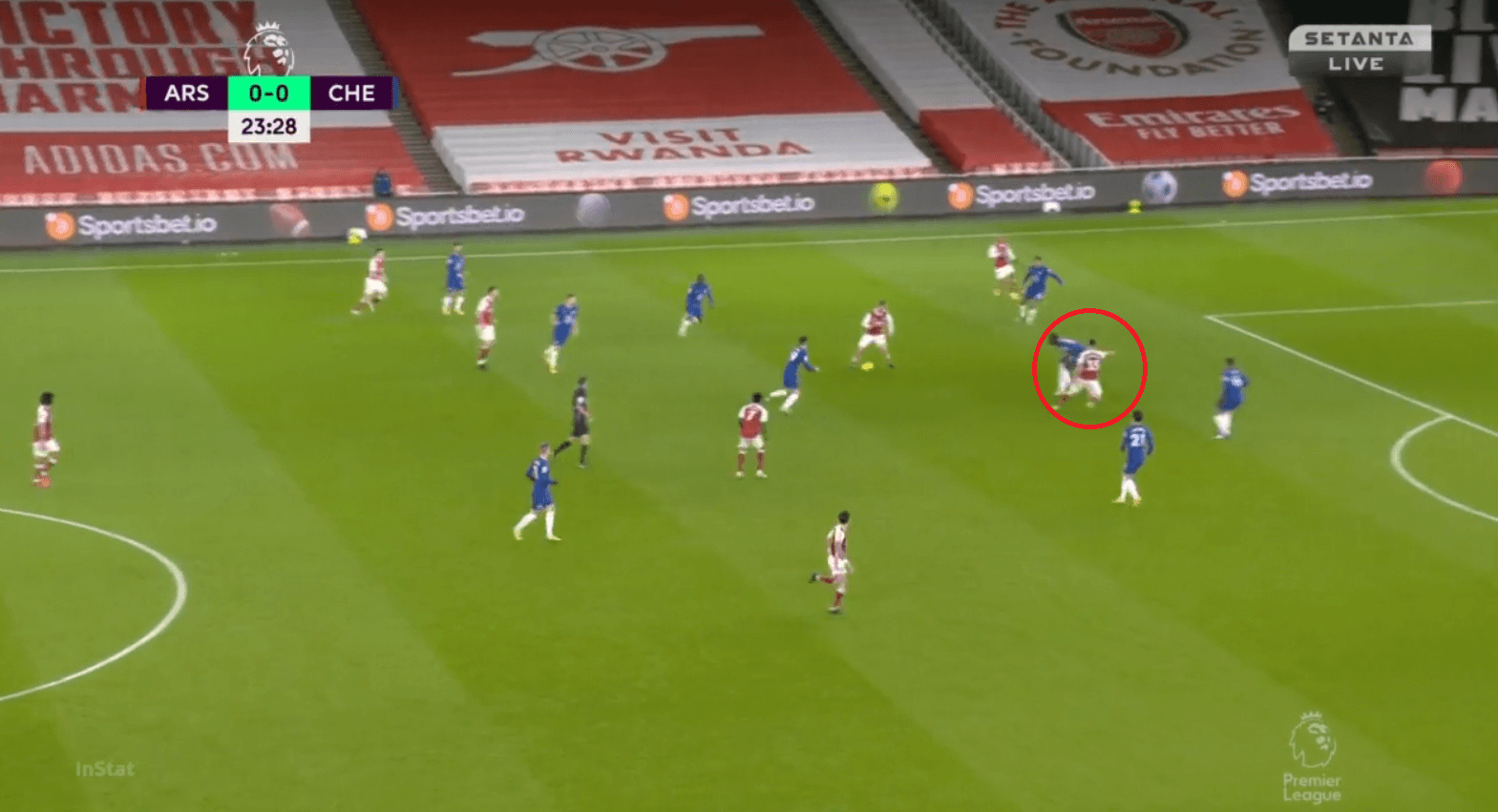 Saka’s flexibility meant that he kept dropping into the central midfield to give Arsenal a sense of numerical advantage in the centre. With Elneny, Xhaka and Smith-Rowe occupying Mount, Kovacic and Kante respectively, Saka had a free role when he tucked in from the wings. 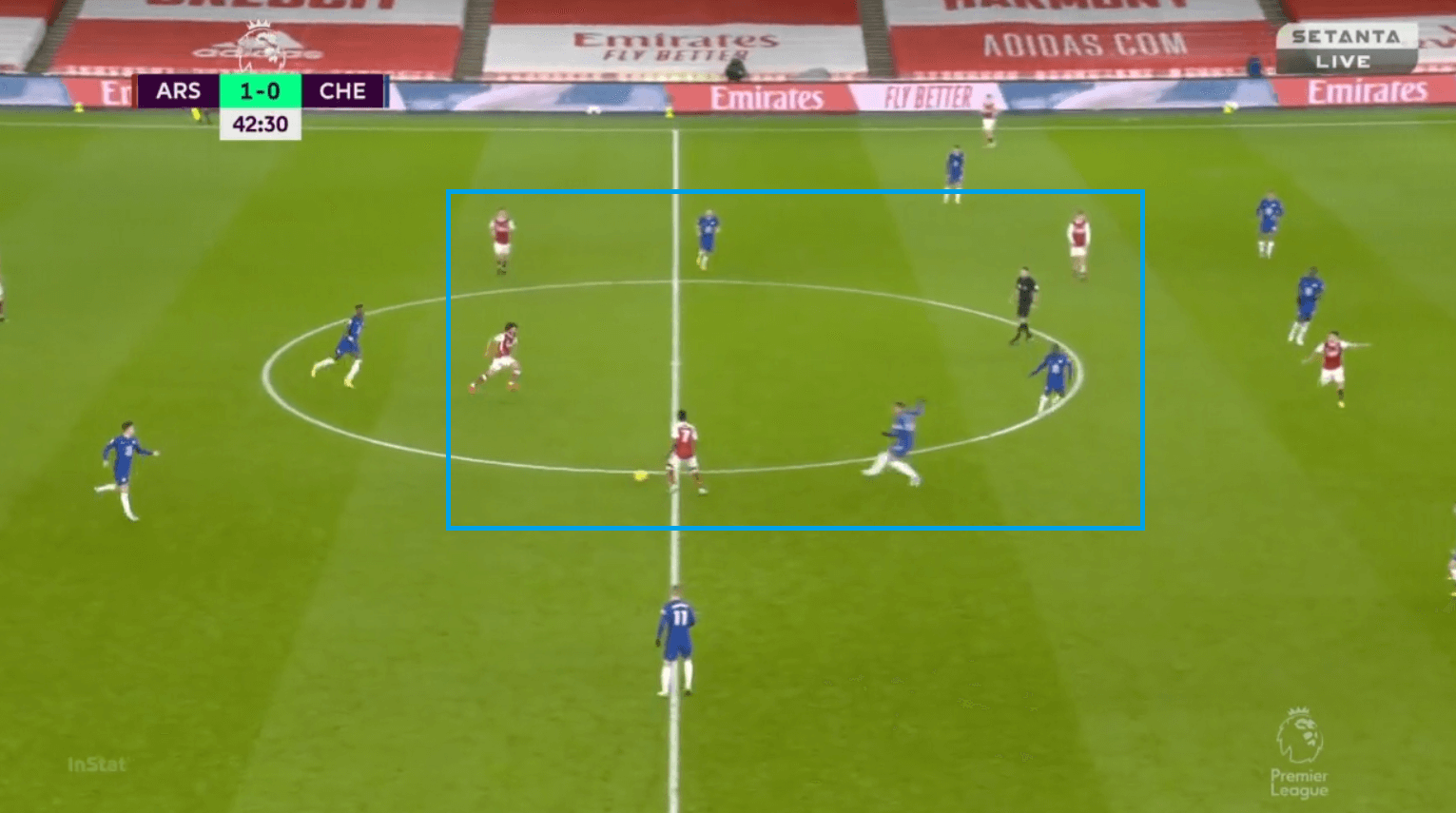 Chelsea after a sub-par start to the season where they had defensive issues especially with the structure were then forced to make some changes into their formation. Lampard brought a 4-3-3 system in place and Chelsea predominantly went with 2 relatively hard-working midfielders in Mount and Kovacic ever since. But in this match, the structural issues resurfaced with Chelsea players leaving gaps in between the lines and getting dragged away too easier. The example below shows their first two lines of defence very disorganised and leaving two much of space in the midfield. 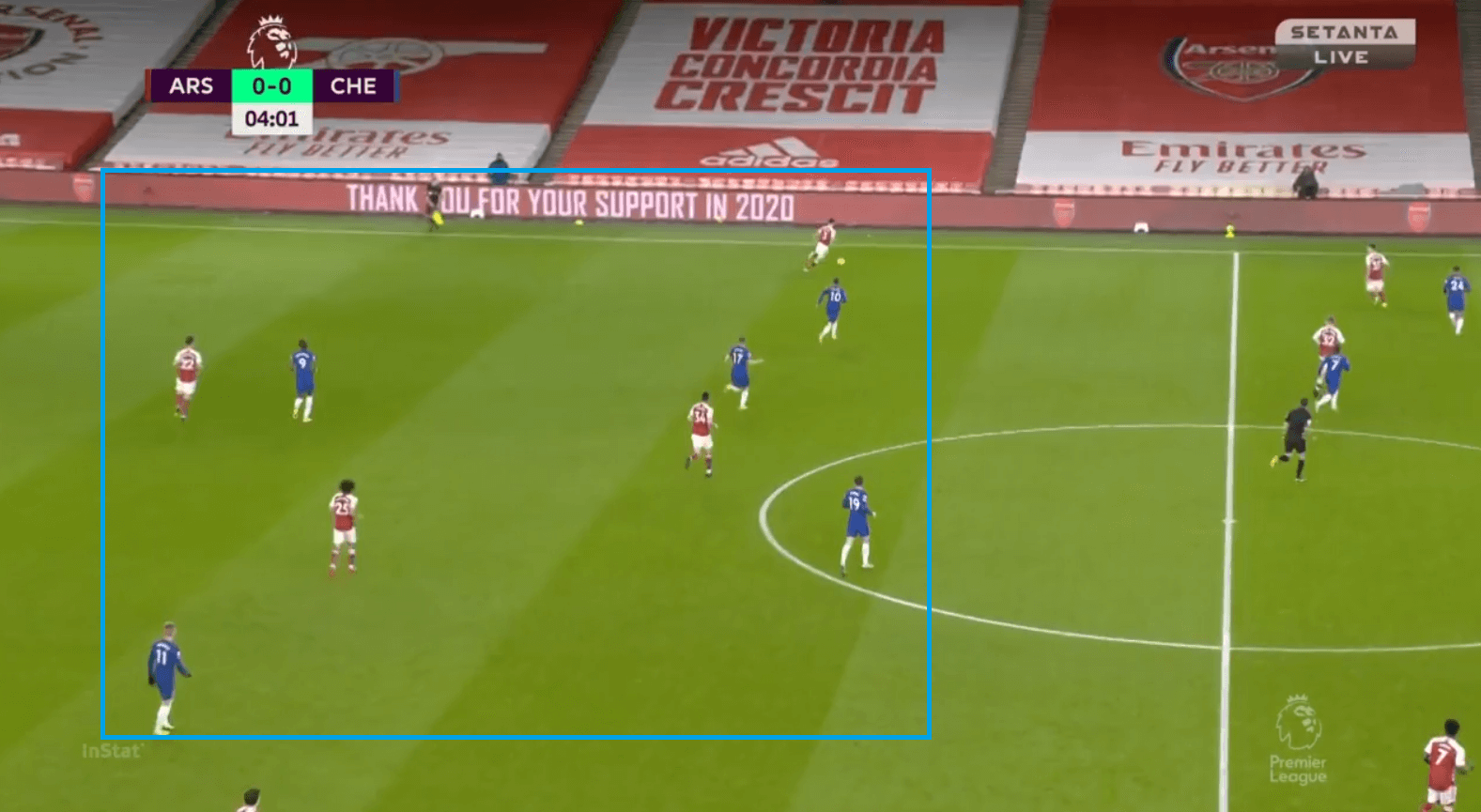 Conceding spaces is something that every team does due to the compact-coverage trade-off. But with Chelsea, it has become easy for the opposition to use runners and droppers to stretch the team. Particularly, in this game Arsenal used their verticality really well and they kept forcing Chelsea to concede spaces in between the lines. Chelsea too kept lacking a concrete shape to manage these situations as they kept falling for the bait. The image shows too much of spaces ahead of Chelsea’s midfield and defensive line. 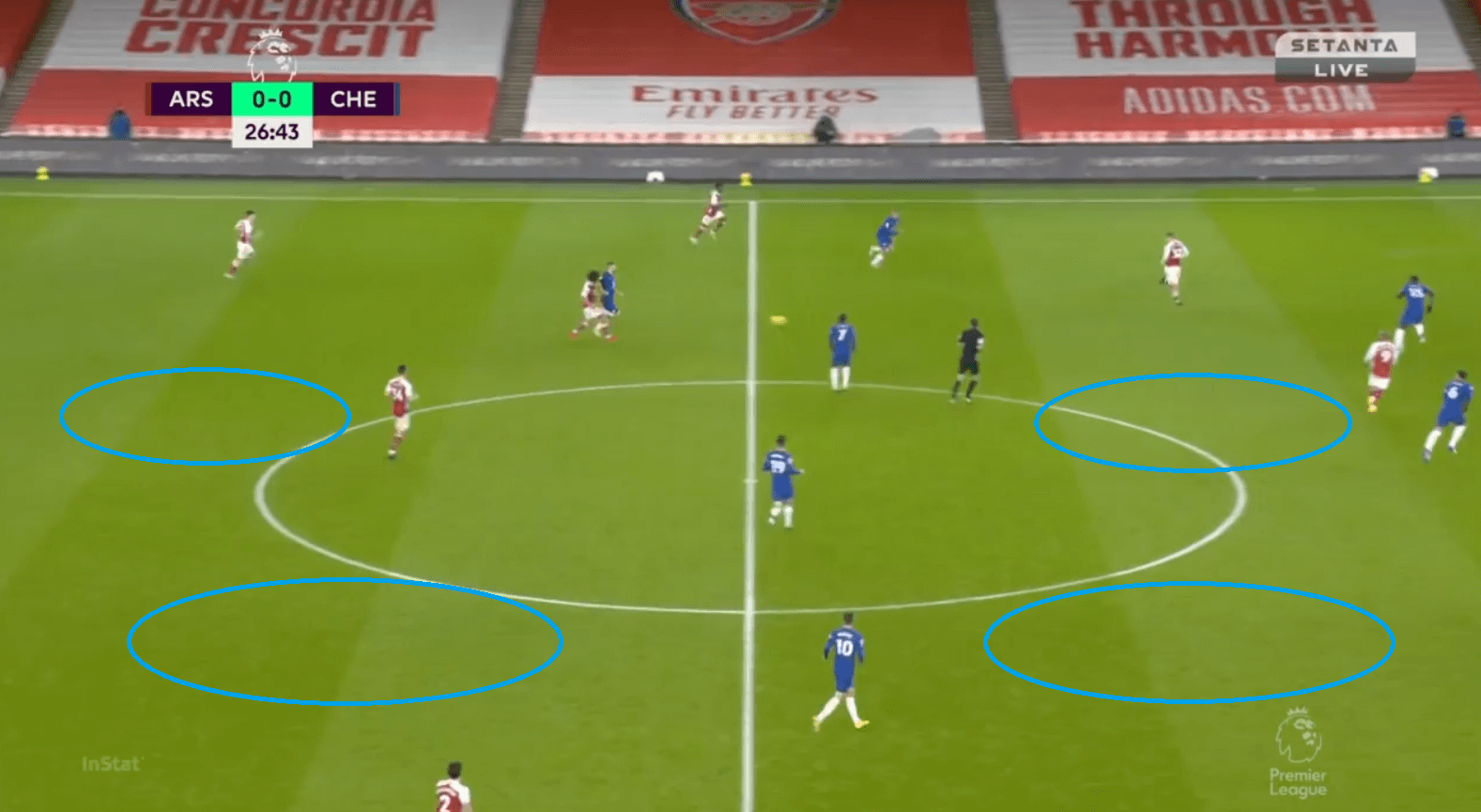 The wingers did not help the full-backs by tracking back and defending when the Arsenal players tried to enter the penalty box. In the image below, we can see Pulisic not coming back while James is forced to deal with both Tierney and Martinelli in a 2v1 situation. 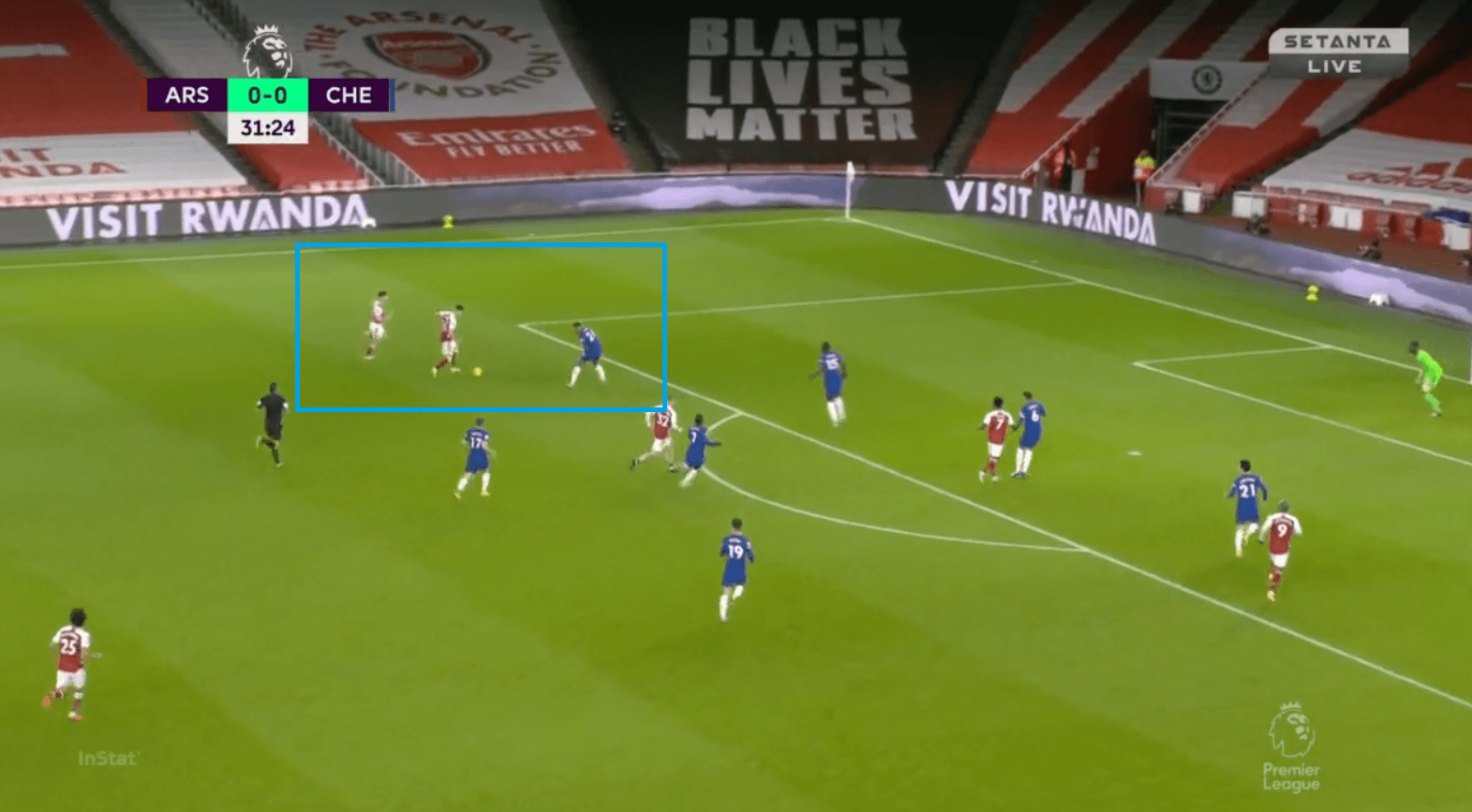 Chelsea with possession looked to play out from the back and drag the Arsenal player higher up the pitch and find men between the lines. In their previous matches, they would also look to hoof the ball to Giroud / Abraham and the ball would be flicked towards Werner running behind or they would hold the ball well to make way for 3rd man runs. In the buildup phase, one of Kovacic and Mount would drop to form a double pivot. This was since Smith-Rowe kept heavy tabs on Kante and progressing with only him was going to be difficult. With Mount dropping Saka in the left-wing or far wing in the example below was attracted by Mount. This left Chilwell free in the flank and a simple switch of play would have easily allowed Chelsea to progress the ball since Bellerin was occupied by Werner. But Zouma didn’t realize it and the opportunity went wasted. 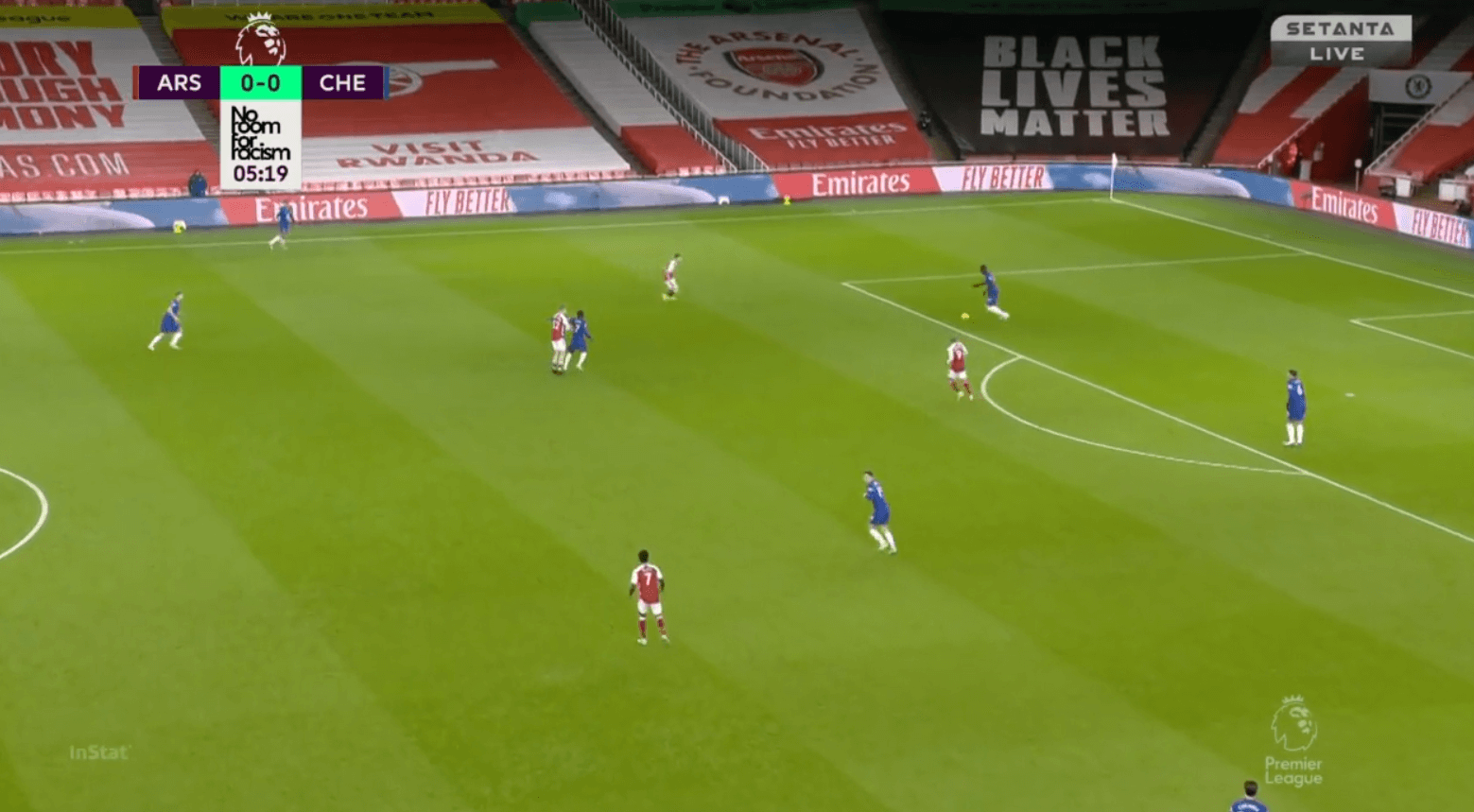 Abraham dropping into the wing and dragging Holding with him meant that space opened up for the run of Werner or Mount. But in this case, Arsenal’s defensive players were good in tracking back, while Abraham too did a good job to hold the ball well and switch the play to the other flank after Arsenal crowded the near-flank. 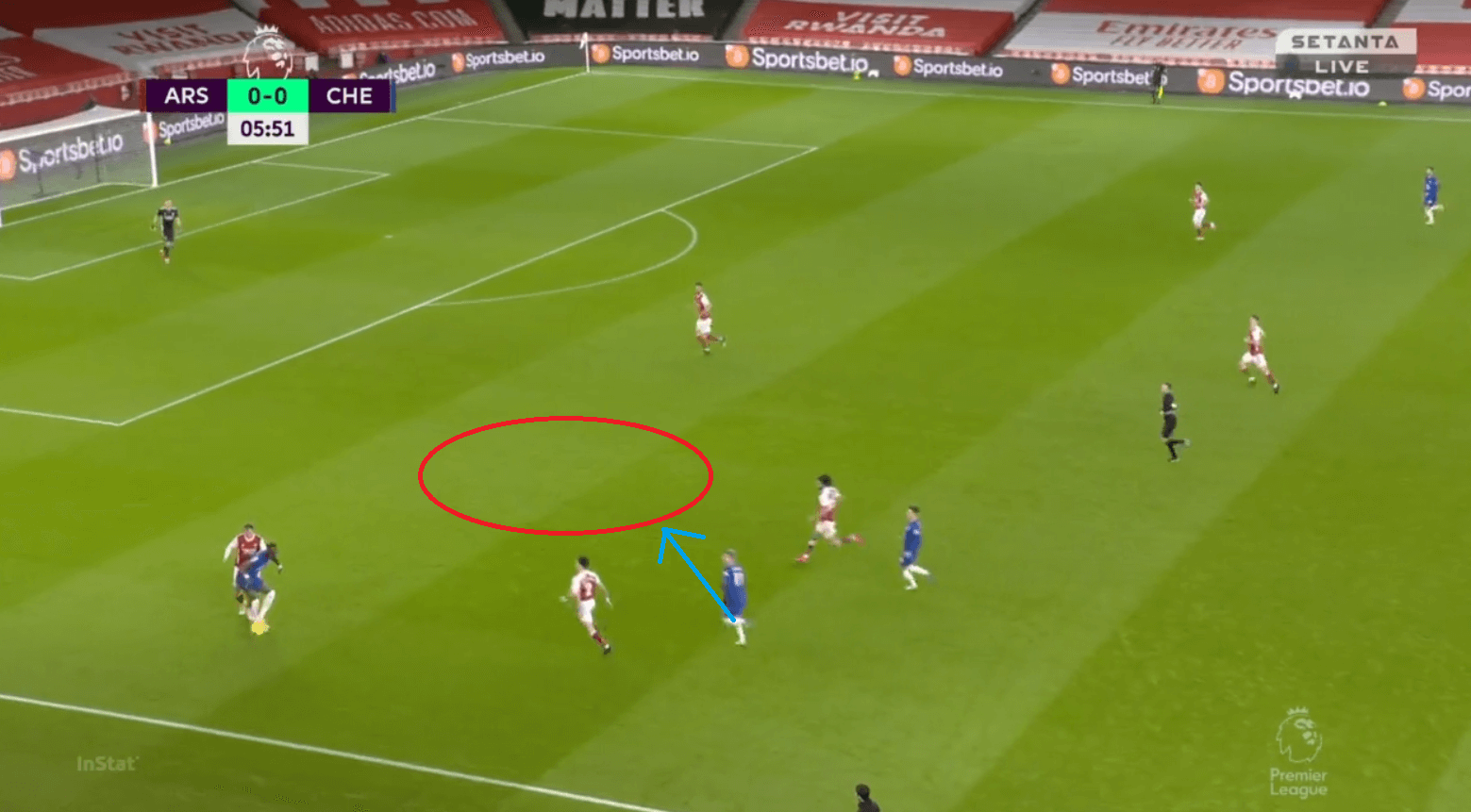 Another issue with Chelsea’s positional play was they were not proactive in occupying spaces and also few times they had very fewer men on the ball near flank and left many men on the opposite flank. This made it easier for Arsenal to defend and as they needed fewer men to commit. In the example, we can see Chilwell having the ball and most of the Chelsea players are on the opposite flank. Abraham is closer to the right half-space when he is supposed to be occupying the space in the left one (red circle). 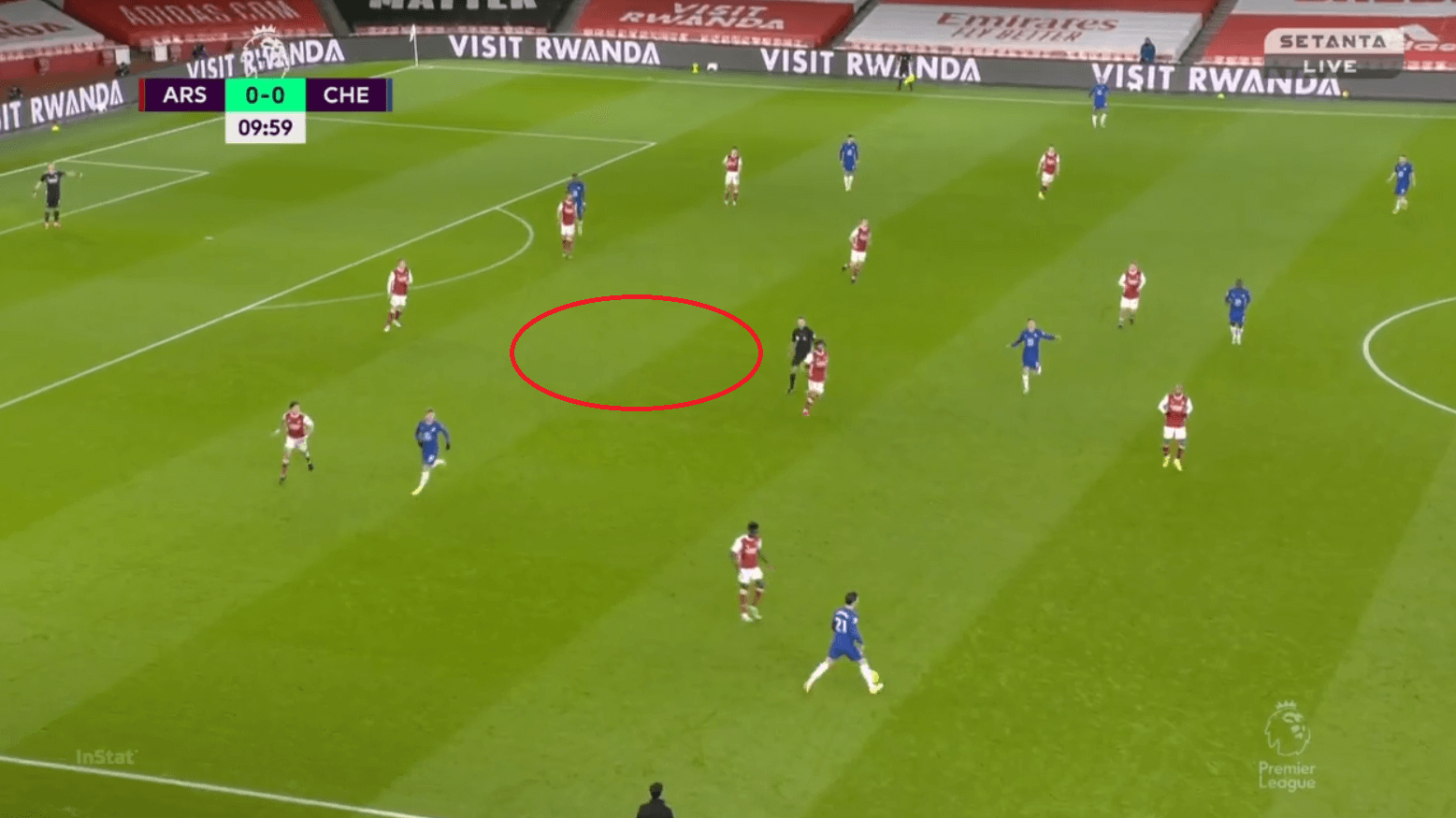 Decision making while occupying the spaces was another issue for Chelsea and players kept making wrong decisions and movements into spaces. In the image below after a switch of play was made by Reece James with Mount and Chilwell in acres of space with no one marking them after Bellerin was dragged by Werner inside. Chilwell brought down the ball and Saka was struggling to get back in time. Mount in that scenario should have made a run into space (red circle) ahead of him. Instead, he dropped back and aligned exactly into Saka’s cover shadow making it difficult for Chilwell to pass to him. Had Mount made the correct run and he would have dragged Bellerin either with or without the ball and this would have opened space for a Chilwell run. 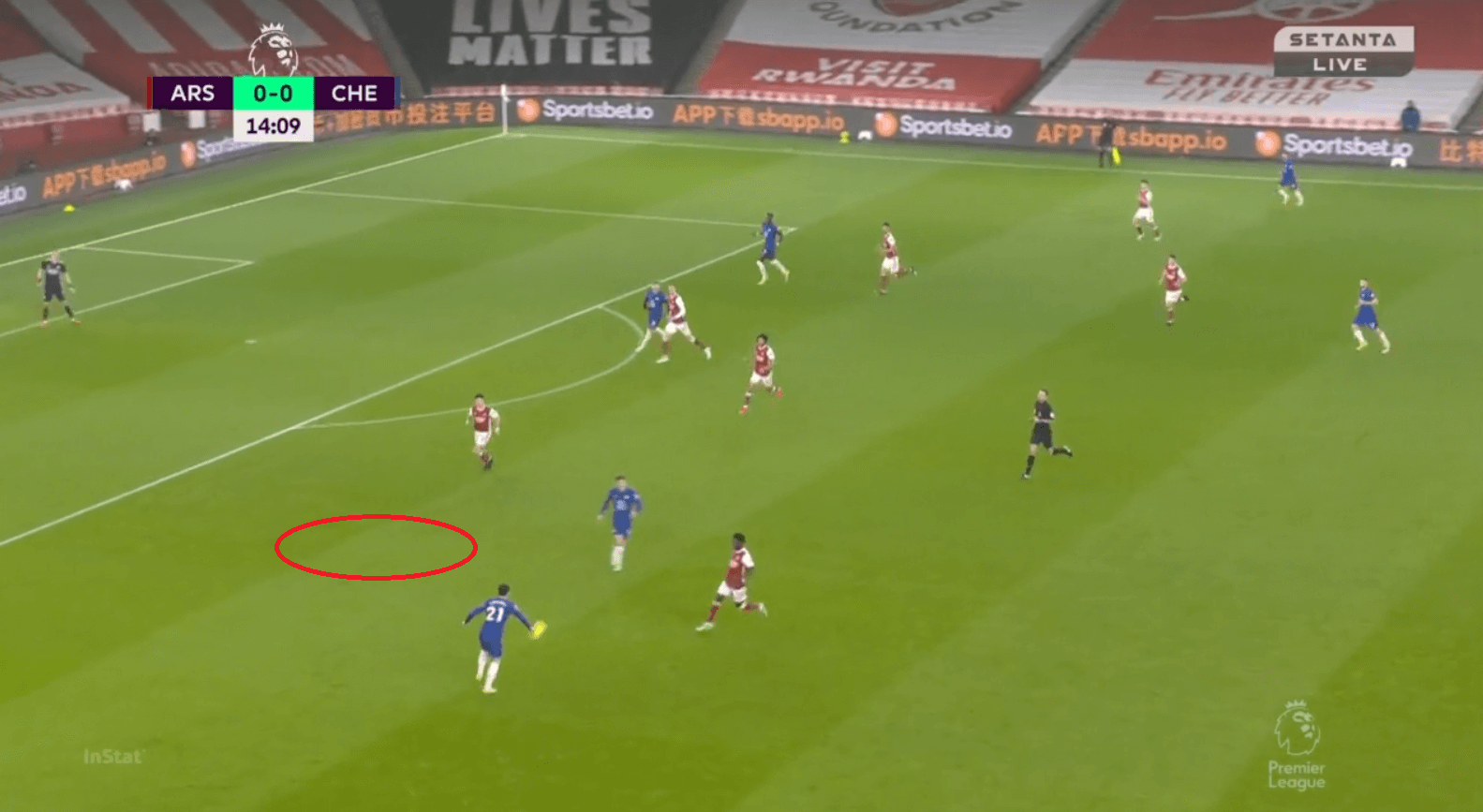 Lampard’s insistence on playing Werner as a winger has also not the reaped the rewards for quite a while. Werner, who plied his trade as a striker in Germany, has struggled to settle into this position as it requires him to beat his man in 1v1 situation which he is not quite good at. Lampard has also tried him at the other wing looking to use his pace to help the team stretch the defence. But his lack of repertoire when compared to the likes of Pulisic and Hudson-Odoi makes him one dimensional and easy to defend.

Arsenal defended in a 4-2-3-1 formation with a man-oriented zonal system both higher up the pitch and in the middle-third. Their first line of defence ensured that Chelsea did not progress the ball into the midfield by tightly marking Kante. When the ball went to Zouma, Smith-Rowe would press him while Lacazette marked Kante and when the ball went to Silva, the roles reversed. 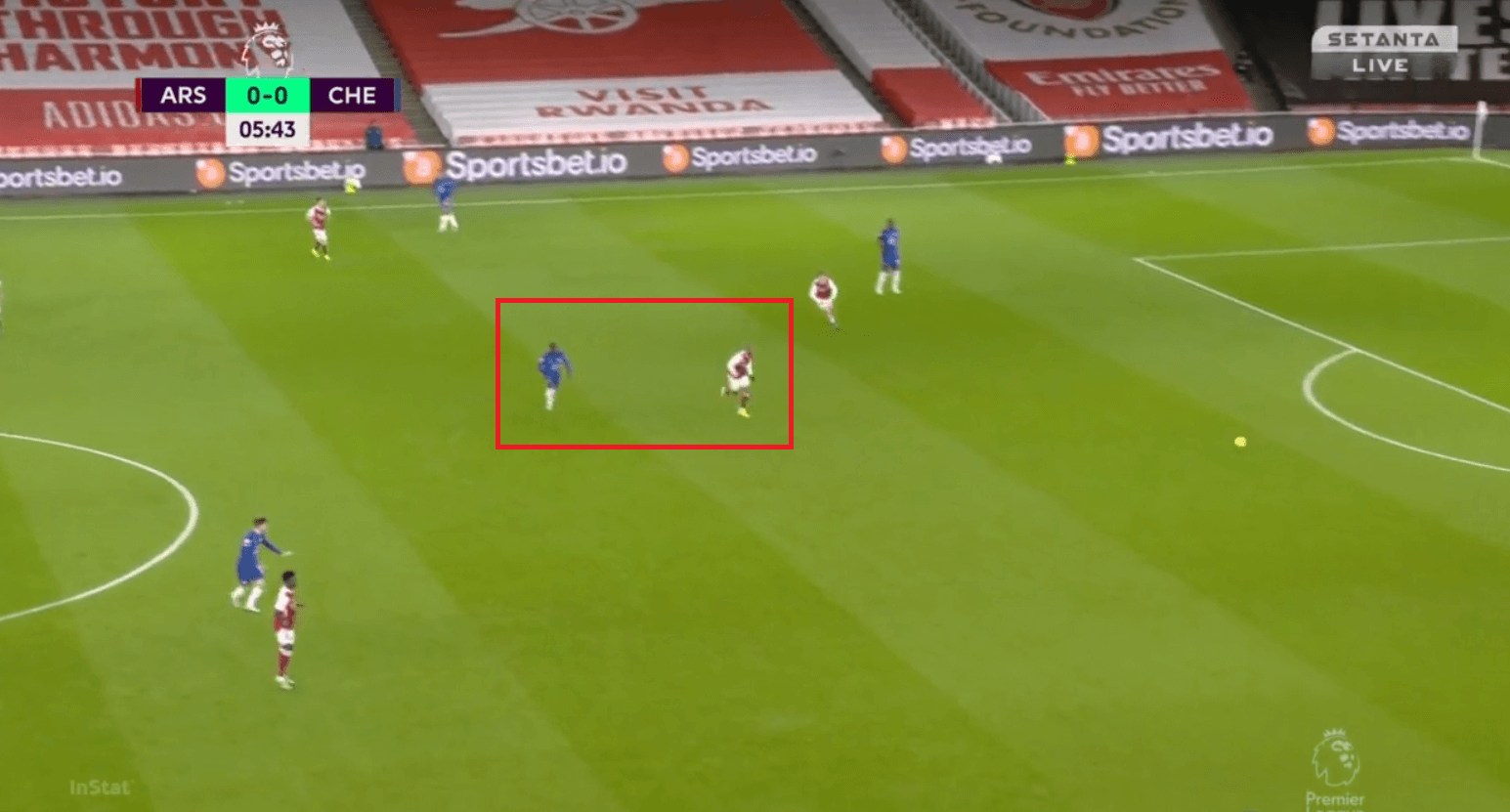 In a low block, the structure shifted to a 4-4-1-1 with two banks of 4 players defending and squeezing the spaces in between the lines while Lacazette and Smith-Rowe continued their duty of marking Kante with taking turns. 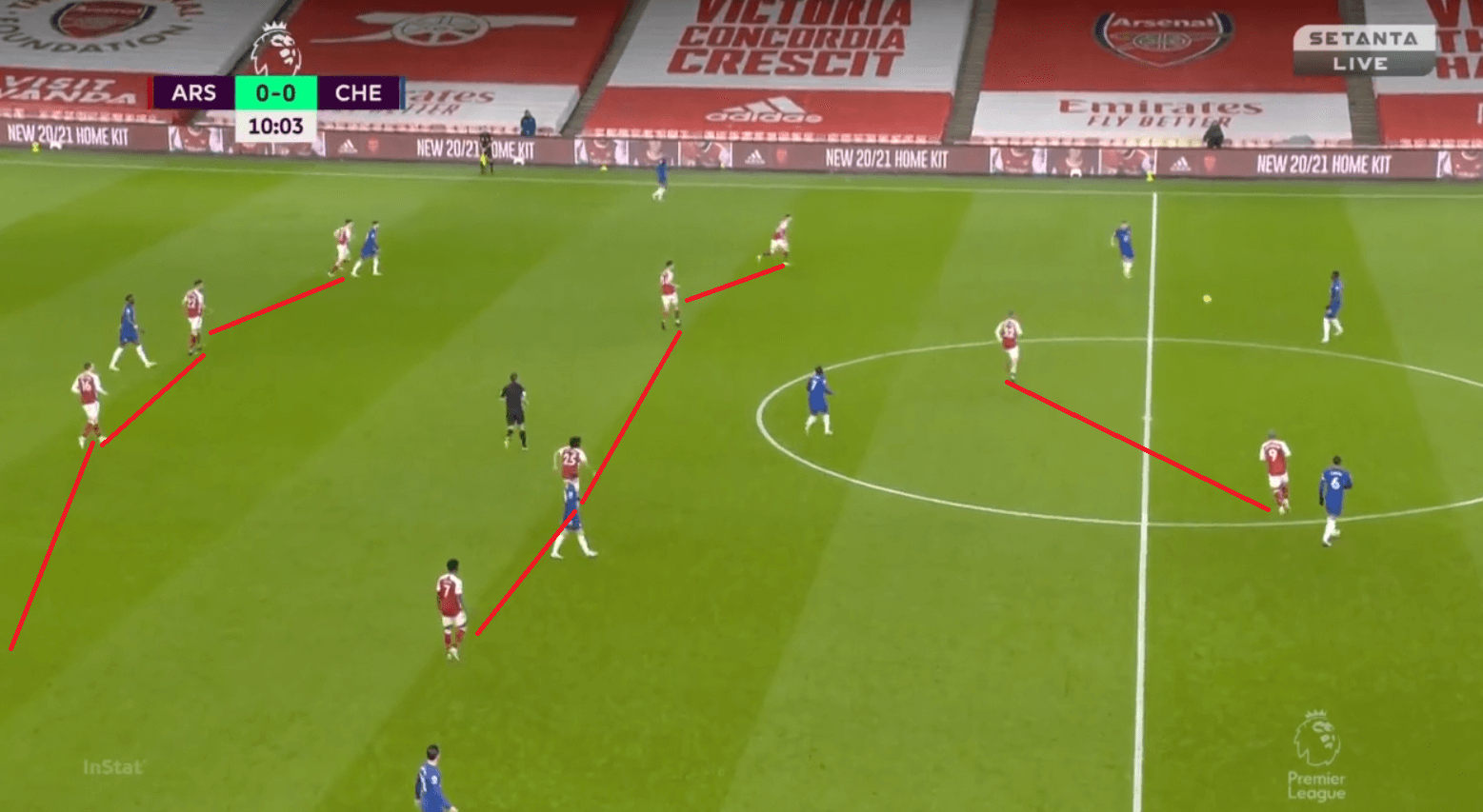 After a winless run of 7 games in the league, Mikel Arteta’s men finally put in a tremendous performance and despite a late surge from Chelsea, Arsenal’s confidence and momentum found in the match pushed them an extra mile to secure the vital 3 points. Chelsea, on the other hand, continue to slip further away from the Leaders Liverpool while having played another additional game too.