After an exciting first round, the MLS postseason continued to serve upsets and quality matches. One of the more anticipated matchups was Philadelphia Union hosting the New England Revolution. Due to the league schedule and restrictions on travel, MLS teams were required to play teams within their home market. This meant that the Union and the Revs were playing one another for a sixth time this season.

Philadelphia, led by the coach of the year Jim Curtin, were fresh off winning the Supporters Shield for the first time in club history. This trophy is awarded to the best team in the league at the end of the regular season.

New England was making their second consecutive playoff appearance under Bruce Arena. The Revs were fresh off their dramatic last-minute victory against Thierry Henry’s Montreal Impact.

At the end of regulation, New England delivered the upset against Philadelphia. In this tactical analysis, we will look at the Revolutions’ defensive tactics and how they conquered the Union in transition.

In the previous meetings between these two teams, Philadelphia has given the majority of the possession to the Revs. In this meeting, however, the Union had 58% of possession throughout the game. This allowed them to take 15 total shots, although only four were on target.

Their usual form of attack is through blistering counter-attacks, led by the speedy Aaronson. They were tasked with trying to break down New England’s defensive block. Using an example from the match we see how this looked.

As they have in previous games, Philly looked to stretch the defence and make runs in the halfspaces. This allows the Union to utilize cutbacks instead of aerial crosses. Typically when Curtin introduces midfielder Ilsinho as a sub, the Brazilian drifts all the way to the touchline as we can see above.

Upon receiving, we can see that he immediately has drawn the attention of a defender. This triggers Bedoya’s run into the gap created in the halfspace. Bedoya then looks to serve a cross into Santos and Przybylko, who are running into the box.

Although the cross was eventually blocked, it was one of the many attacks that used this tactic. While the Union attempted 13 crosses throughout the game, they were only able to connect on one in the first half.

In the following section of the analysis, we will look at the Revs defensive tactics.

As stated above, Bruce Arena challenged the Union to break the Revs down. By getting their wide players to drop, New England sat in a 4-5-1 low block. By remaining compact, they forced Philadelphia to play around them. As the ball moved from side to side, the low block would look like 5-4-1.

As we can see above, the Revs have shifted to their left. Since Philly’s far side wing-backs have pushed higher, New England can afford to drop a winger to help defend. This tactic created a numerical advantage for the visitors.

While this compact block allowed the Union to take plenty of shots, it was incredibly beneficial when it came time to defend those shots. The Revolution were able to block eight shots, further frustrating the hosts. New England was also able to clear the ball 26 times. Although this is a high number, the Revs were comfortable with their defensive role.

This not only snuffs out the potential attack but catches the opposition in transition. Using sequence from the first half, we can see just how New England looked to counter to establish possession and how they would stop Philadelphia’s counter. 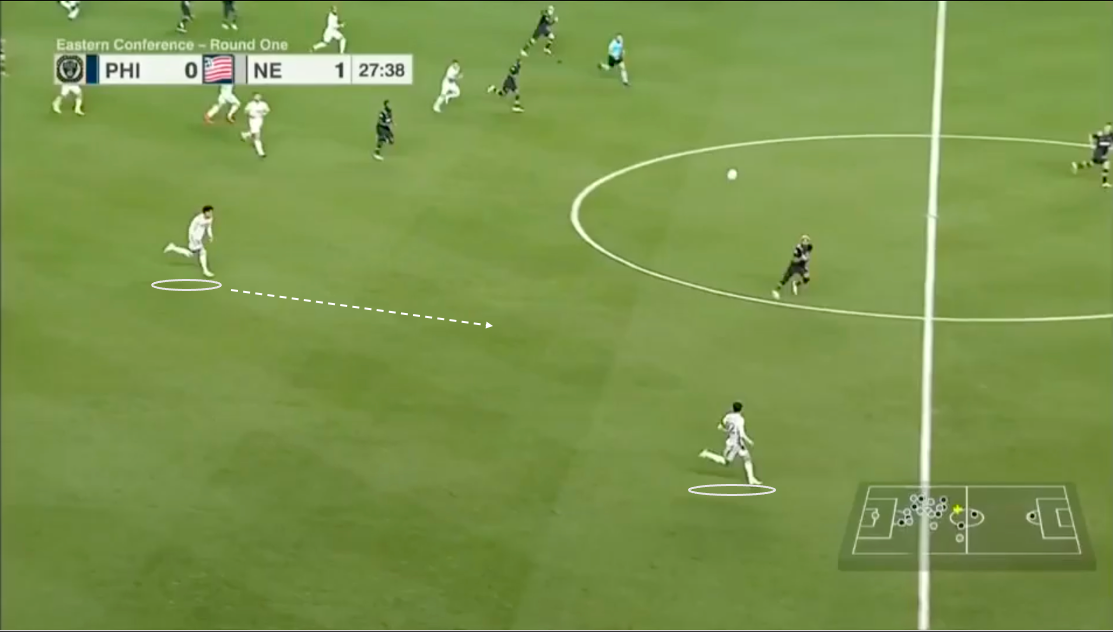 We see Carles Gil in the midst of receiving a long ball after a corner kick. As he waits for the ball, we also see Buchanan sprinting to join his captain to create a 2 v 2. 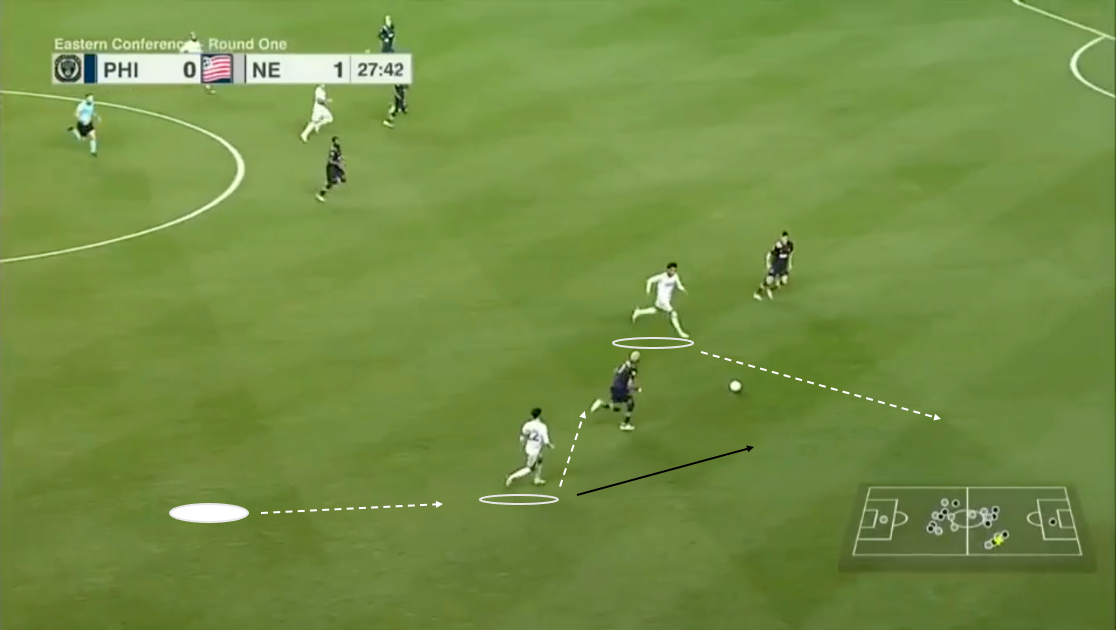 Using his pace Buchanan underlaps Gil, who has dribbled wide to draw the defender with him. Again we have an example of how New England utilized Buchanan’s speed to exploit the space left by the Union wing-backs. 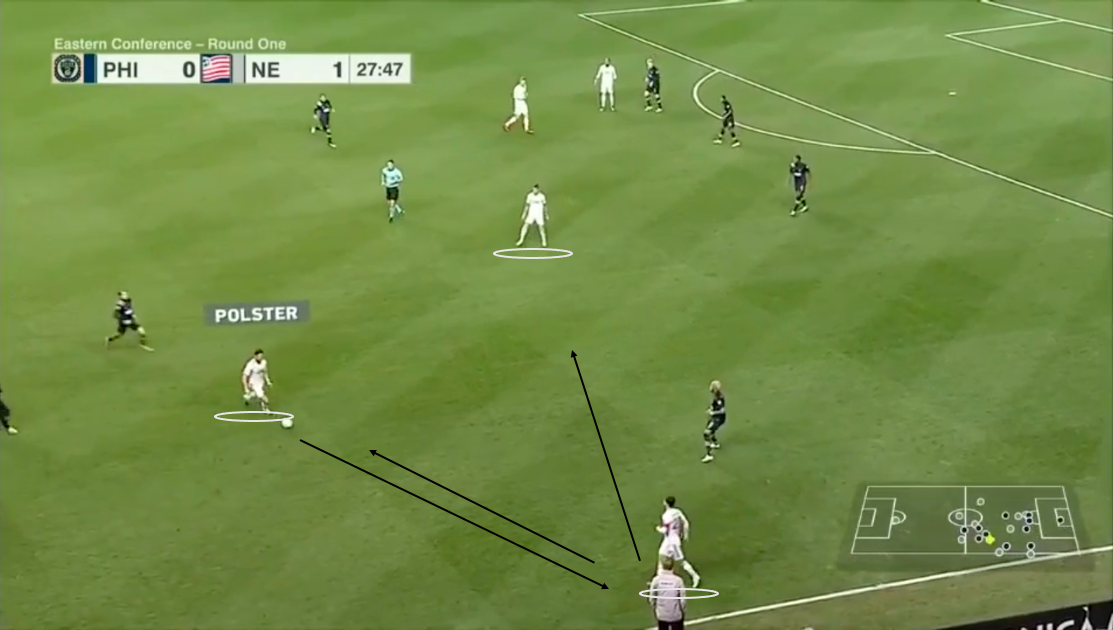 After receiving the ball, Gil bounces the ball with Polster. These back and forth passes again draw the defenders towards the flank. The space created by this tactic opens up space for Bou in the middle. 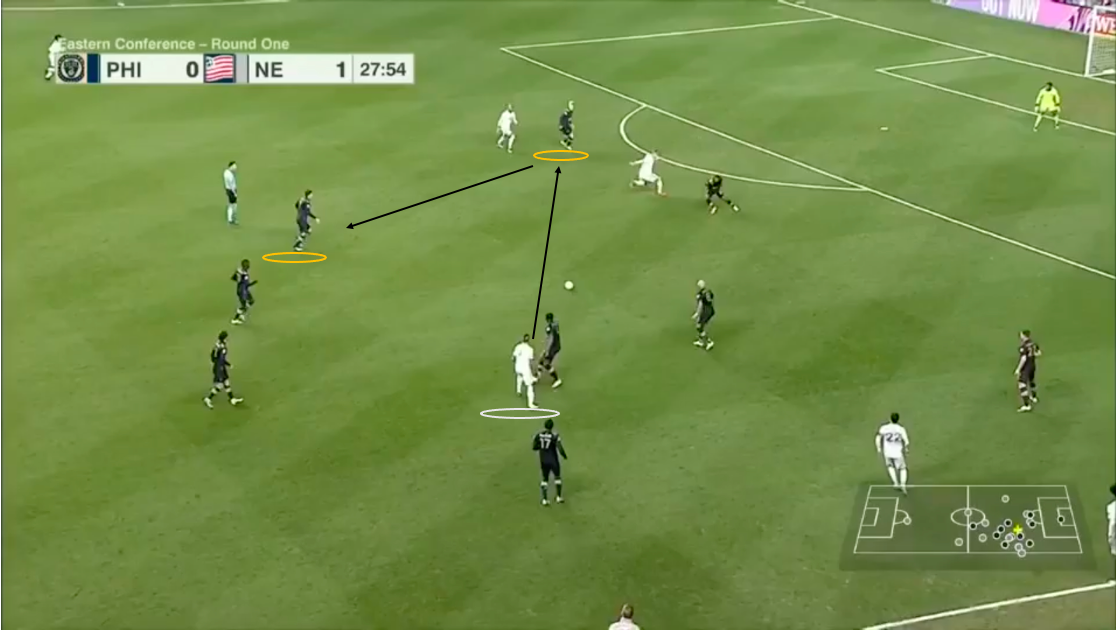 The Argentinian’s forward pass is intercepted by the Union’s centre back Glesner, who immediately passes to Bedoya. Once Bedoya quickly passes to Monteiro, Philadelphia’s counter begins with Aaronson and Gaddis moving forwards. 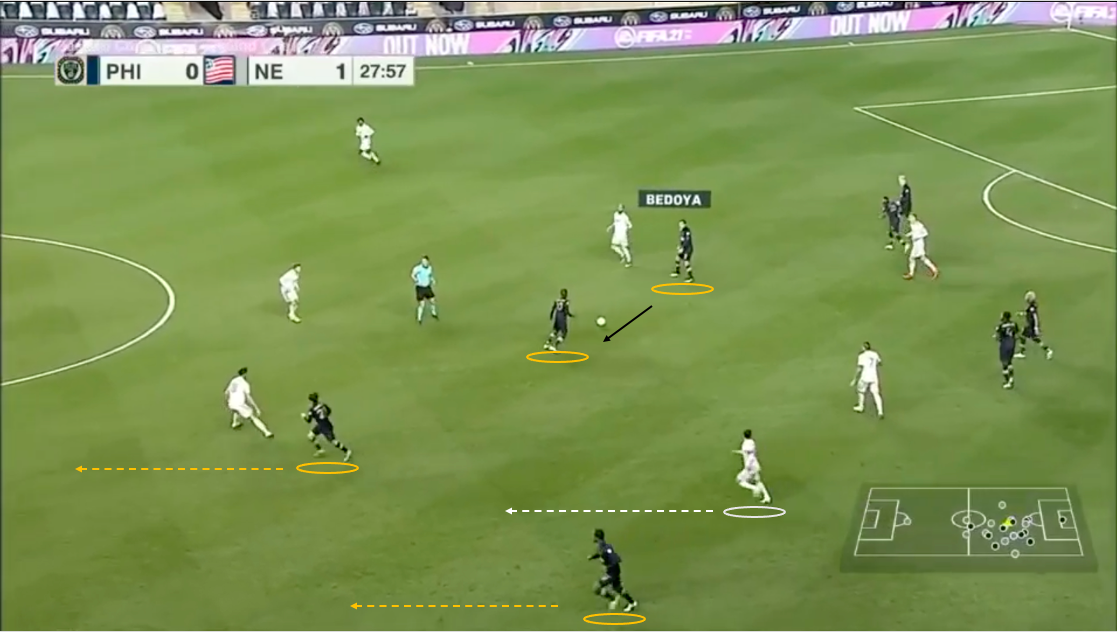 Gil, having tracked the play after it broke down, moves to cut off a potential pass to Gaddis. Due to his defensive work rate, the Spaniard is able to intercept the pass and attack a disorganized Philadelphia. 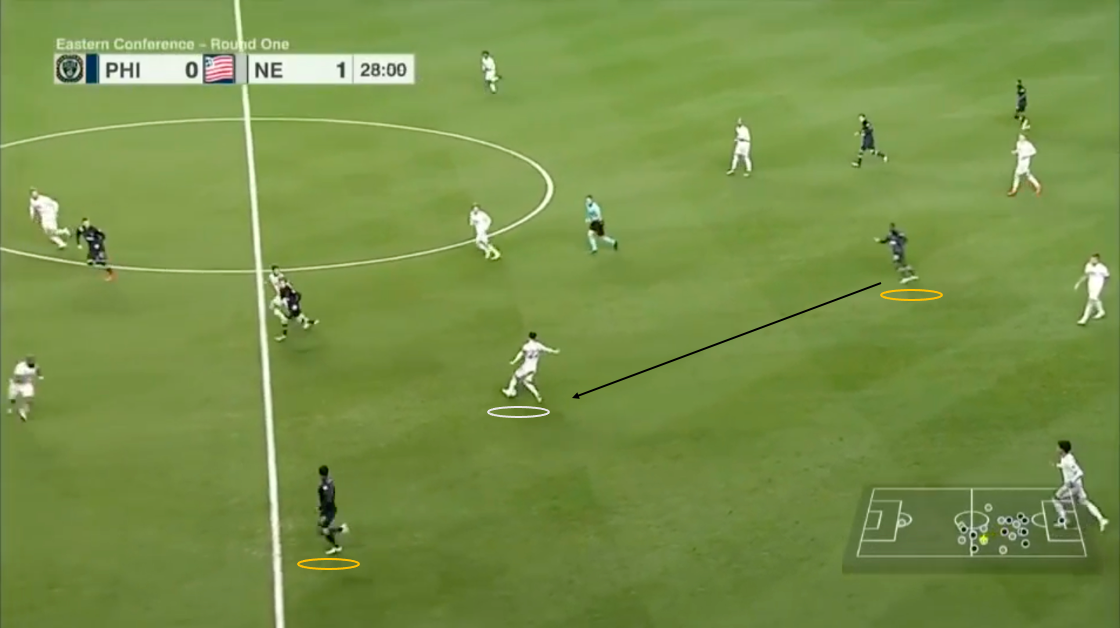 New England was able to utilize Gil’s ability to find pockets of space to their advantage. They also counted on Buchanan’s pace and attacking instincts to create overloads on the right flank. Gil acted as the main attacking hub for the Revs, connecting 44 passes throughout the match. 12 of which came in the final third. 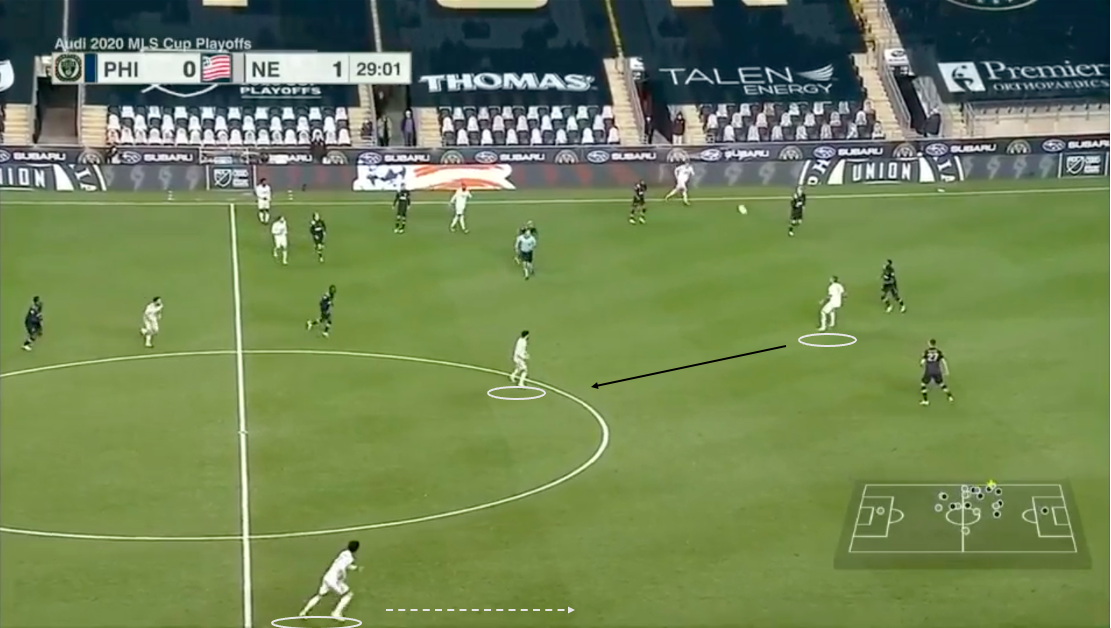 Using their second goal as an example, we can see above how these two players combined for New England’s game-winner. After quickly moving the ball forwards to Buksa, the Polish striker heads the ball down for Gil, who is supporting. As the Spaniard is receiving the ball, we can see Buchanan beginning his run on the right flank. 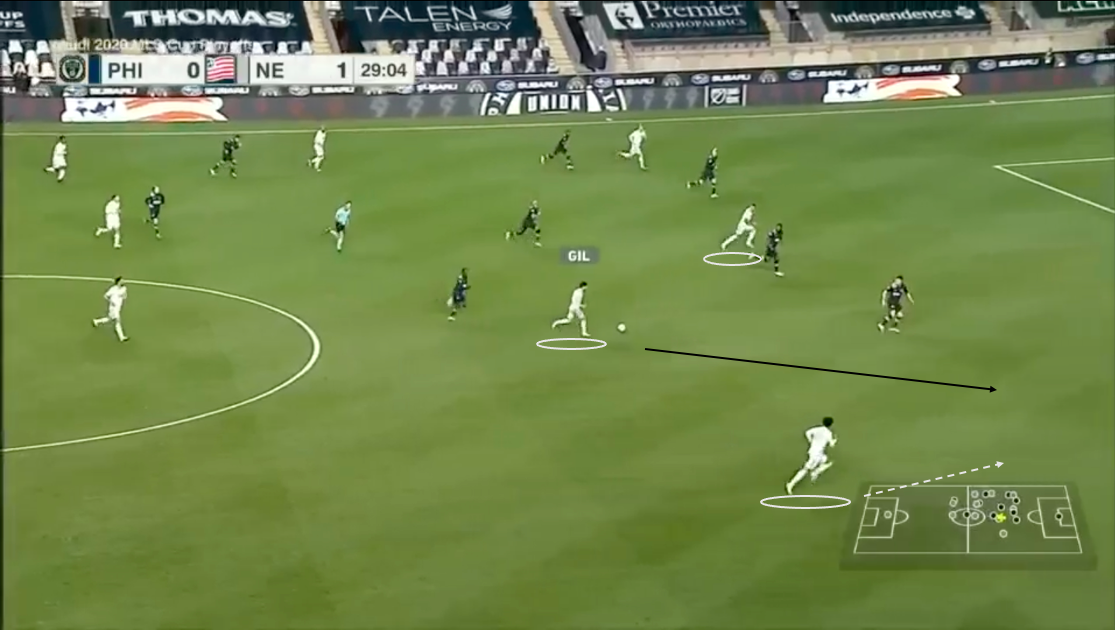 We can also see the Philadelphia back four, while compact, has shifted over in an attempt to keep the Revs to one side. Due to a combination of Gil’s ability to find space and the speed of New England’s passing, Buchanan is able to make his run into acres of space. He wins the ensuing offensive duel with Wagner and smashes the ball past Andre Blake. 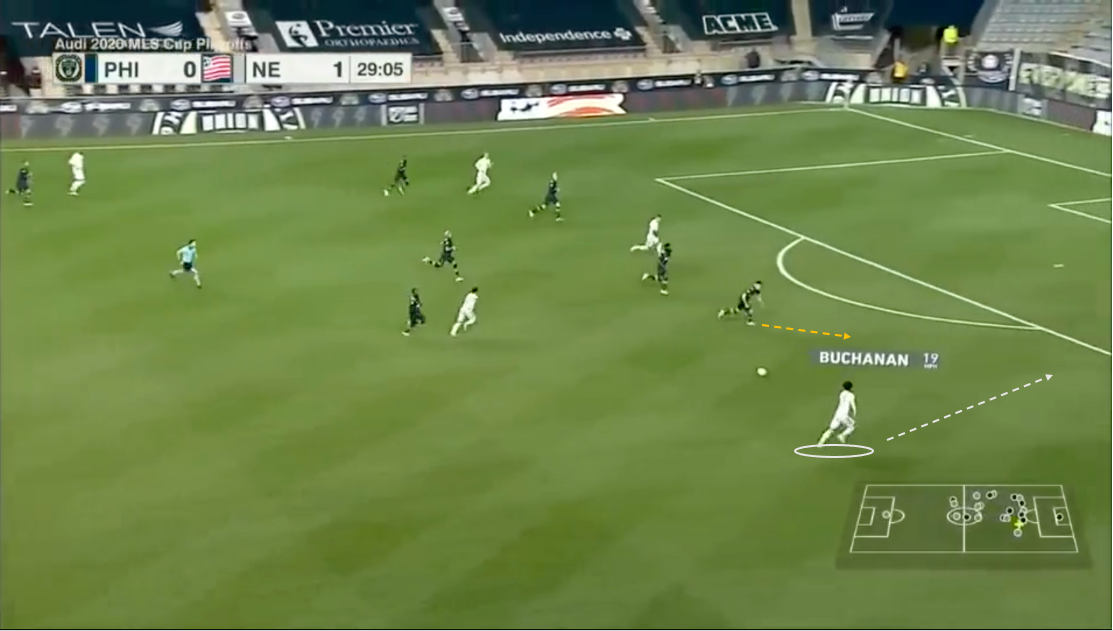 Having Carles Gil and Gustavo Bou back in the lineup proved to be the difference for the New England Revolution. Bruce Arena retains status as a postseason guru, guiding his team to another playoff win. Next up for the Revolution is a trip down to Orlando. It will be the first time this season the Revs will face Nani and the rest of the Lions.

The Philadelphia Union will be disappointed in the manner that their fantastic season has ended. They will now look to their academy to replace the departing Brenden Aaronson, and other potential players leaving for new challenges. No one should count Philadelphia out next season, as they have proven to be a club that is magnificently run.