The Premier League champions head into the 2020/21 season with relatively few changes as compared to last season’s top four, with the likes of Manchester City and Chelsea investing heavily in their squads. Liverpool‘s squad is by no doubt inferior though after all this is a side that has won nearly everything there was to win in a span of 18 months. However, there is always scope for improvement and when world-class players come on the market for mouth-watering prices, you would expect a number of clubs to be vying for their signatures.

This is surprisingly not the case for FC Bayern Munich’s Thiago Alcântara who, in spite of his 30 million price tag, is still on the market with just Liverpool seemingly interested in signing him. The Reds, however, appear to be reluctant to cough up the money for the Spaniard and in this data analysis, we will look at why Liverpool should seal the signing as quickly as possible.

In the first part of our analysis, we will understand Thiago’s playing style before moving onto a data analysis comparing him to Liverpool’s midfielders.

A highlight of Thiago’s game is his impressive passing ability. The midfielder sits deeps and is more than capable of hitting passes over the top as much as he is capable of building up with short passes from the back. In this section, we will analyse his ability and how it fits into the playing style of FC Bayern Munich. 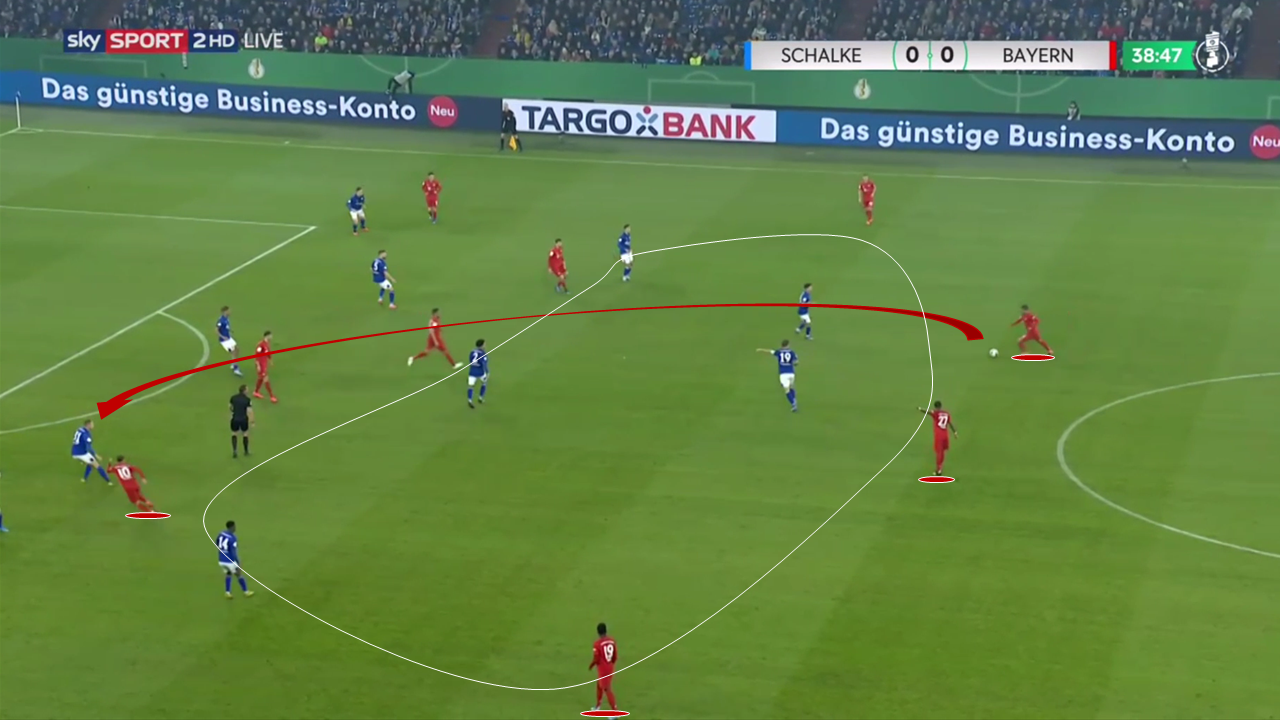 In the image above, we see the high line that Bayern play and Thiago has dropped into the backline alongside Alphonso Davies, David Alaba and Joshua Kimmich. Schalke have been forced back into a low block and the Bayern midfield move up to join the forward line. They can effectively bypass the midfield and can crowd the opposition defence or at least match them in number.

This is largely made possible by Thiago’s passing ability, with the Spaniard’s balls bypassing the midfield and moving straight to the final third. This immediately puts pressure on the opposition defence as the midfielders are left scrambling back in order to prevent Bayern from overloading the penalty area. His accuracy and vision make this kind of tactic very dangerous as it provides a reliable mode of attack for his side. 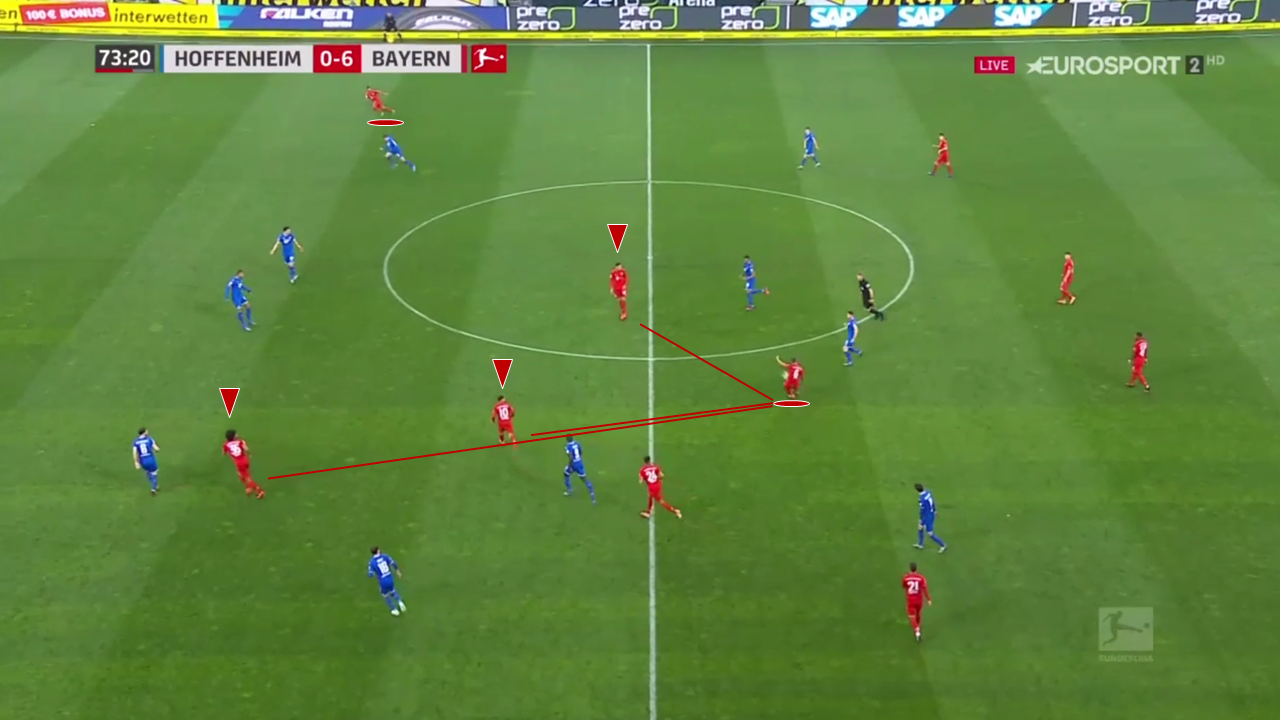 We once again see his passing ability in the game against Hoffenheim as well. Receiving the ball just ahead of the defence, Thiago ensures that he is in a prime position in midfield. The 29-year-old has four to five passing options to launch a counter-attack but with a quick look, he has identified the winger’s run around the outside. Such runs are largely similar to the runs that Mohamed Salah and Sadio Mané would make at Liverpool and it is clear that Thiago’s passing ability would complement the playing styles of the two prolific forwards. It would mean that the side would be able to hit the opposition on the counter and would also be adept at playing against sides with a high backline.

Considering his position as a central-defensive midfielder, we would also be looking at his defensive and dribbling ability. Thiago sits just ahead of the centre-backs and often drops into the backline as well, meaning he plays a crucial role in defence as well. Should the side play out from the back, he would also have to look to beat players before finding a pass and hence his dribbling ability would also be important. 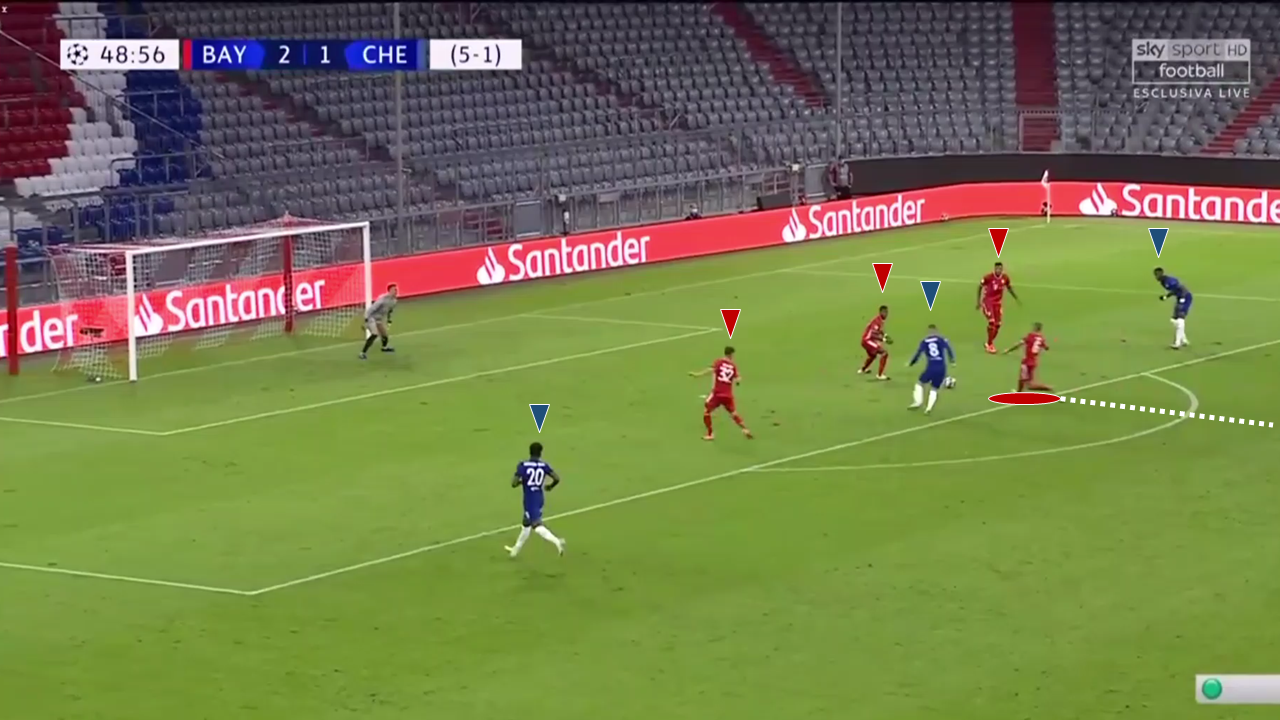 In the Champions League fixture against Chelsea, we had seen Bayern play a very high line, meaning that they could be vulnerable on the break. Above is an example where the Blues have effectively created a three on three situation with the Bayern defenders running back to get players behind the ball. Chelsea’s winger makes a wide run and with one more pass, could find himself through on goal.

Thiago is quick to read this situation, however, and understands that his role is to chase down the ball. He sees that the defence cannot commit to any challenges should they be beaten and he rushes back to intercept a crucial pass to the forward. This ability of his to track back and aid his defence in tricky situations is impressive and shows that he does not abandon his defensive duties either. 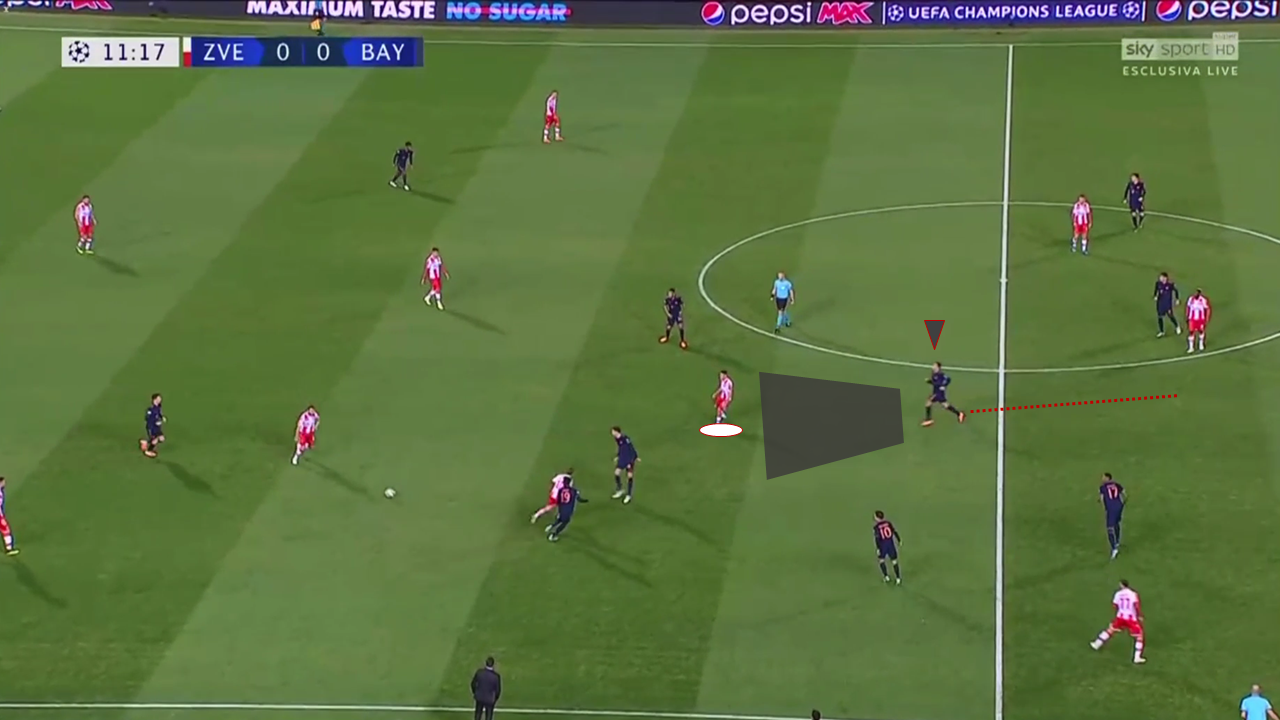 In another Champions League game against FK Crvena Zvezda (Red Star Belgrade), we again see Thiago’s intelligence in defence. The opposition midfielder has dropped into a pocket of space in midfield and is in an ideal position to receive a pass and turn. Sensing the danger, Thiago steps out of the backline to engage this midfielder, so as to prevent him from turning towards goal. Where his fellow midfielders have allowed the player space, the Spaniard has been a step ahead and his quick thinking snuffs out the possibility of an opposition attack and turns over possession for his side. 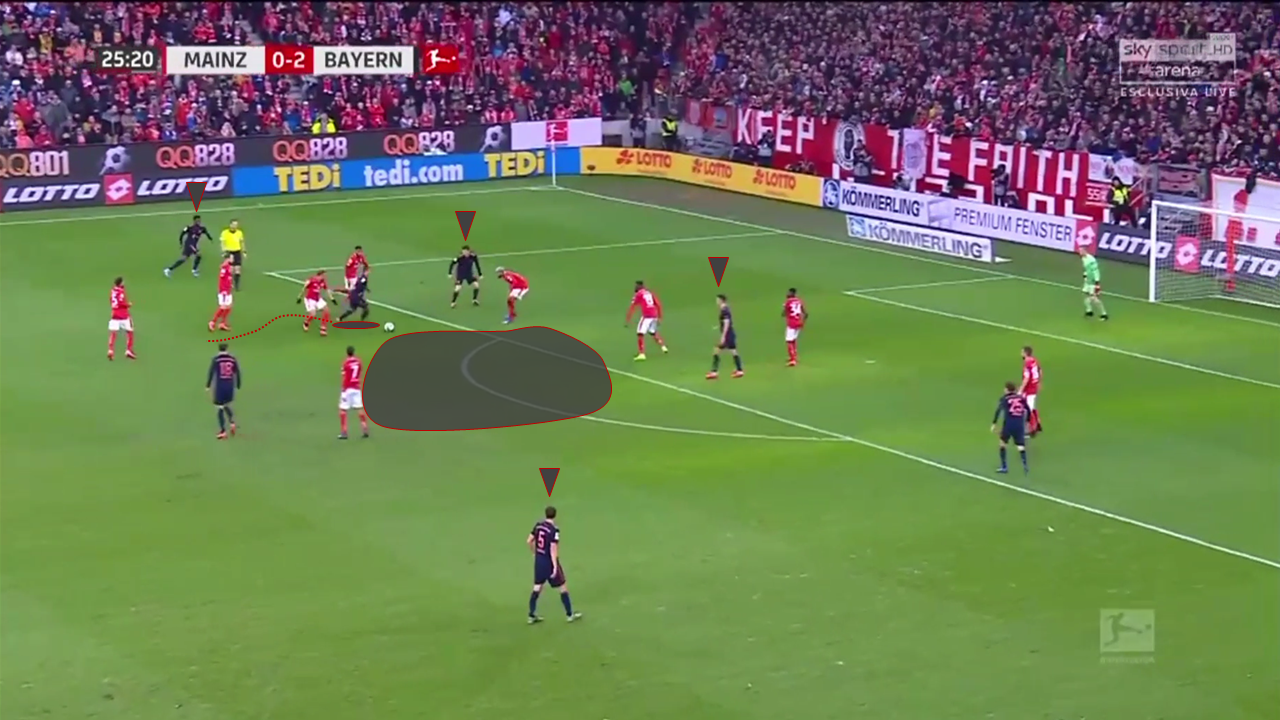 While we have seen his impressive ability in a deep-lying position, Thiago is also capable of progressing the ball up the field on his own. In the above image, we see that the 29-year-old has weaved his way past four Mainz players and hence created space for his other teammates to receive the ball. He has also opened up a pocket of space for him to cut into and find a shot as well, as highlighted in the image. His technical ability to beat players with ease allows him to take the opposition on and the above move ends up with the Spaniard clearing one more defender before firing home. Thiago is able to single-handedly create opportunities for himself and his teammates and such a trait certainly makes him an asset for any side.

Now that we have understood Thiago’s playing style and how he has been used by Bayern, we will move into a data analysis comparing him to the current set of midfielders at Liverpool.

A central-defensive midfielder would be expected to control the midfield by winning the ball for their team and successfully challenging their opponents. In this section, we will look at how Thiago compares to the current crop of Liverpool midfielders in terms of defensive and aerial duels as well as possession-adjusted interceptions. We should also understand the difference in the leagues as well in order to have some context to the data. 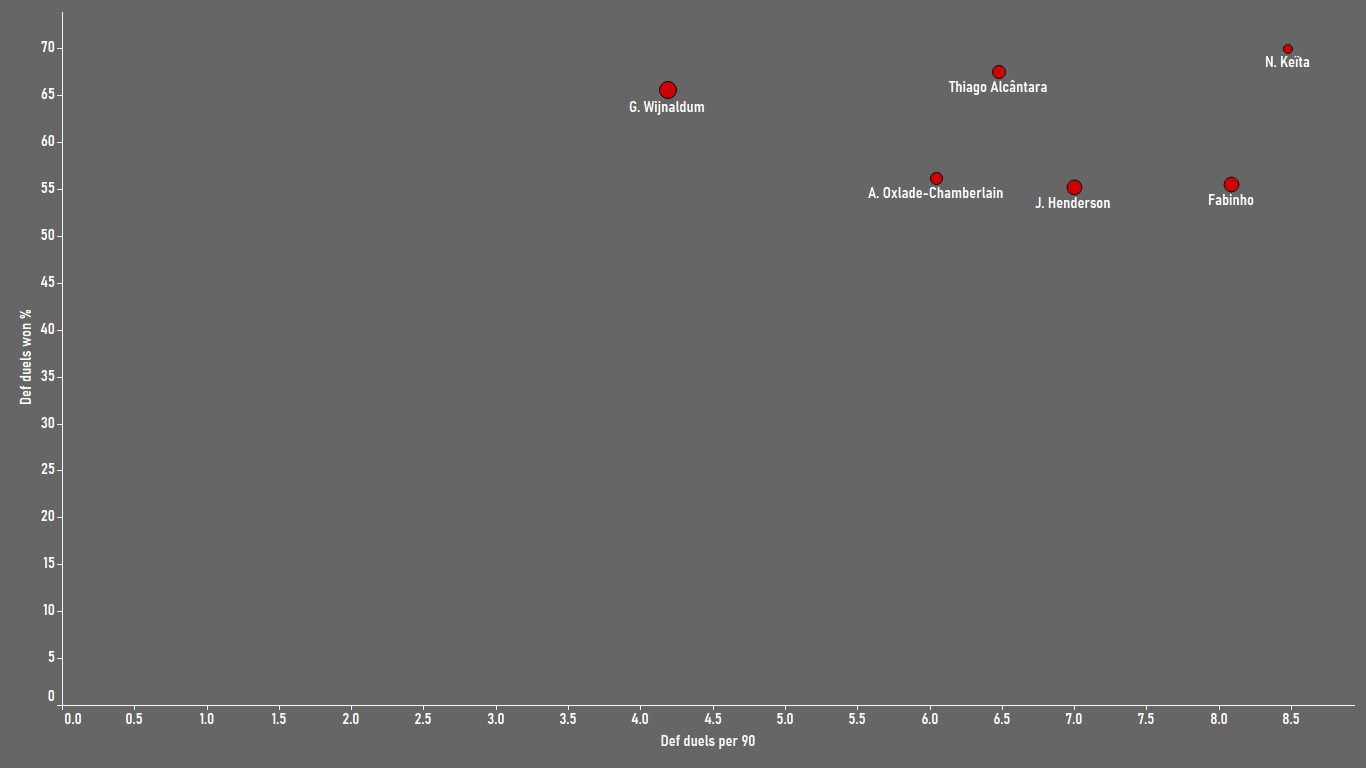 Starting off with the defensive duels, Naby Keïta is clearly the outlier with 8.48 duels per 90 and a success rate of 69.88%. The Guinean has played a limited number of minutes for the Reds but his work rate and ability have caught the eye whenever he has played.

Thiago’s success rate of 67.41% is the second-highest but the 29-year-old has engaged in 6.48 defensive duels, falling behind Keïta, Fabinho (8.09) and Jordan Henderson (7.00). Fabinho and Henderson have been crucial to the Reds’ success and only Georginio Wijnaldum has played more minutes last season. The Dutch midfielder, however, has engaged in just 4.19 defensive duels per 90. 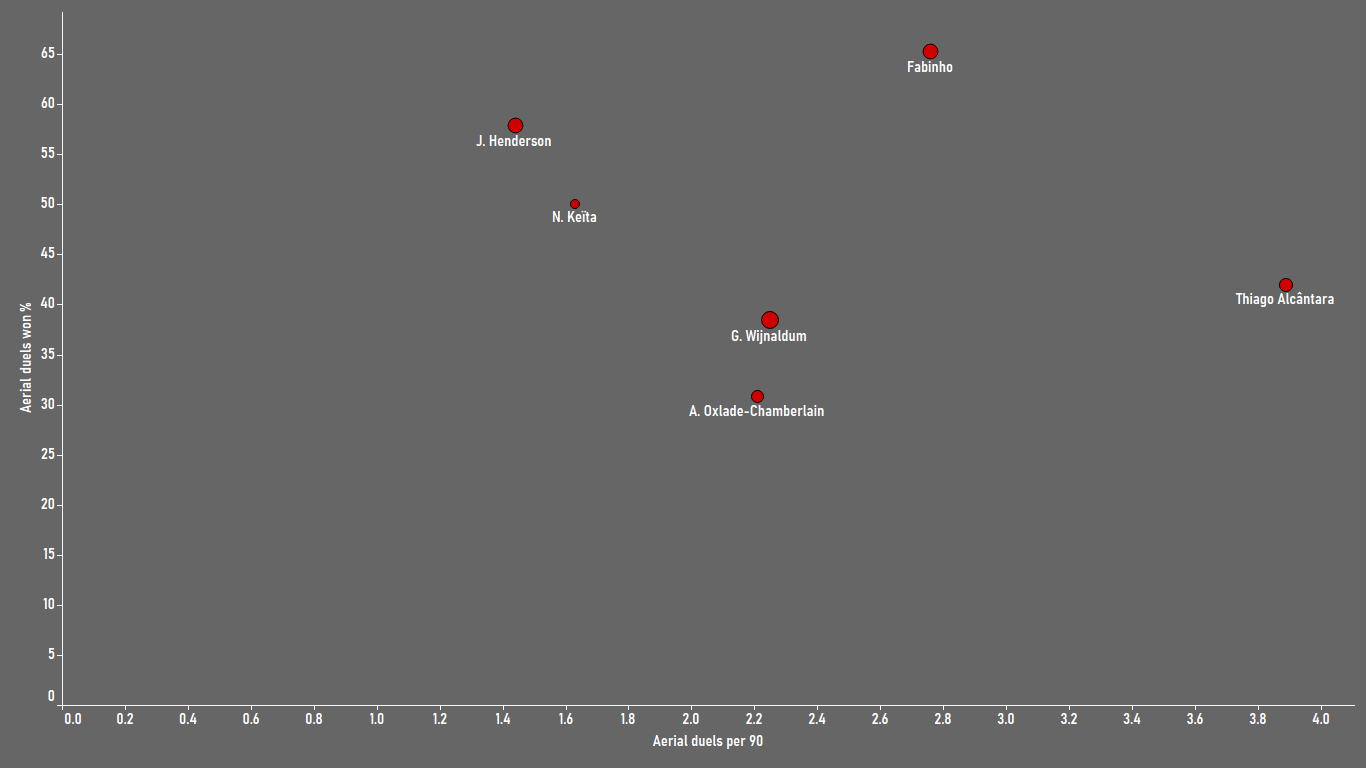 Looking at the aerial duels, Thiago is well ahead of the Liverpool midfielders and engages in 3.89 duels per 90. His success rate of 41.98% is fairly low, however, although it shows that the Spaniard does not shy away from challenging for the ball in the air.

Of the current Liverpool midfielders, Fabinho leads the way with 2.76 aerial duels per 90 and a success rate of 65.22%. The Brazilian is well behind Thiago in terms of volume but he is a fair way ahead of the other players, with Wijnaldum’s 2.25 aerial duels per 90 the closest to him. Alex Oxlade-Chamberlain is next with 2.21 duels per 90 while both Keïta (1.63) and Henderson (1.44) have a significantly lower number of duels per 90, albeit with higher success rates. 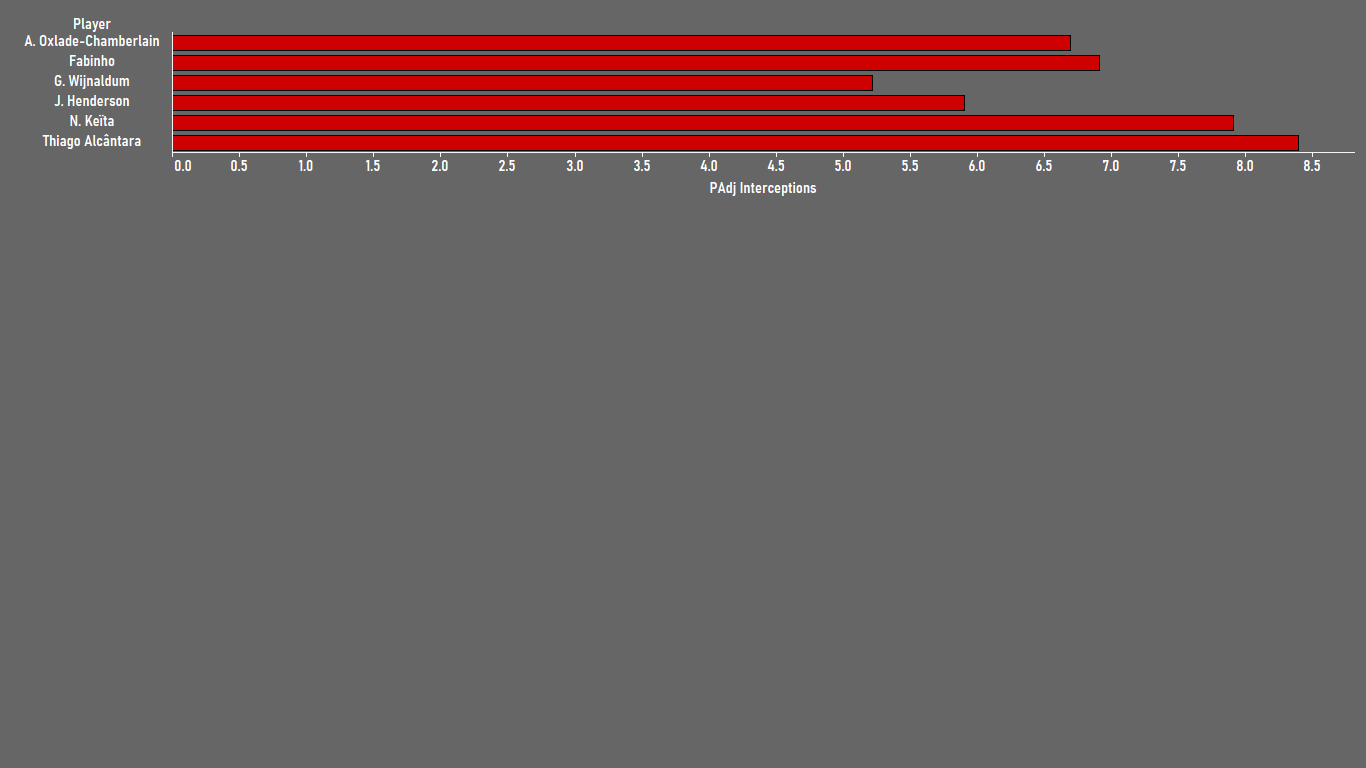 Moving on to the possession-adjusted interceptions, we once again see Thiago lead the way with 8.39 interceptions. Only Keïta is near him with a value of 7.91 while the next best is Fabinho with 6.91 interceptions. The former has played a significantly lesser number of minutes but has performed impressively in this metric owing to his impressive work rate as mentioned earlier. Oxlade-Chamberlain (6.69) also ranks higher than Henderson (5.9) despite playing lesser minutes than the captain. Meanwhile, Wijnaldum’s 5.22 interceptions are the lowest of the group although he has played the most. 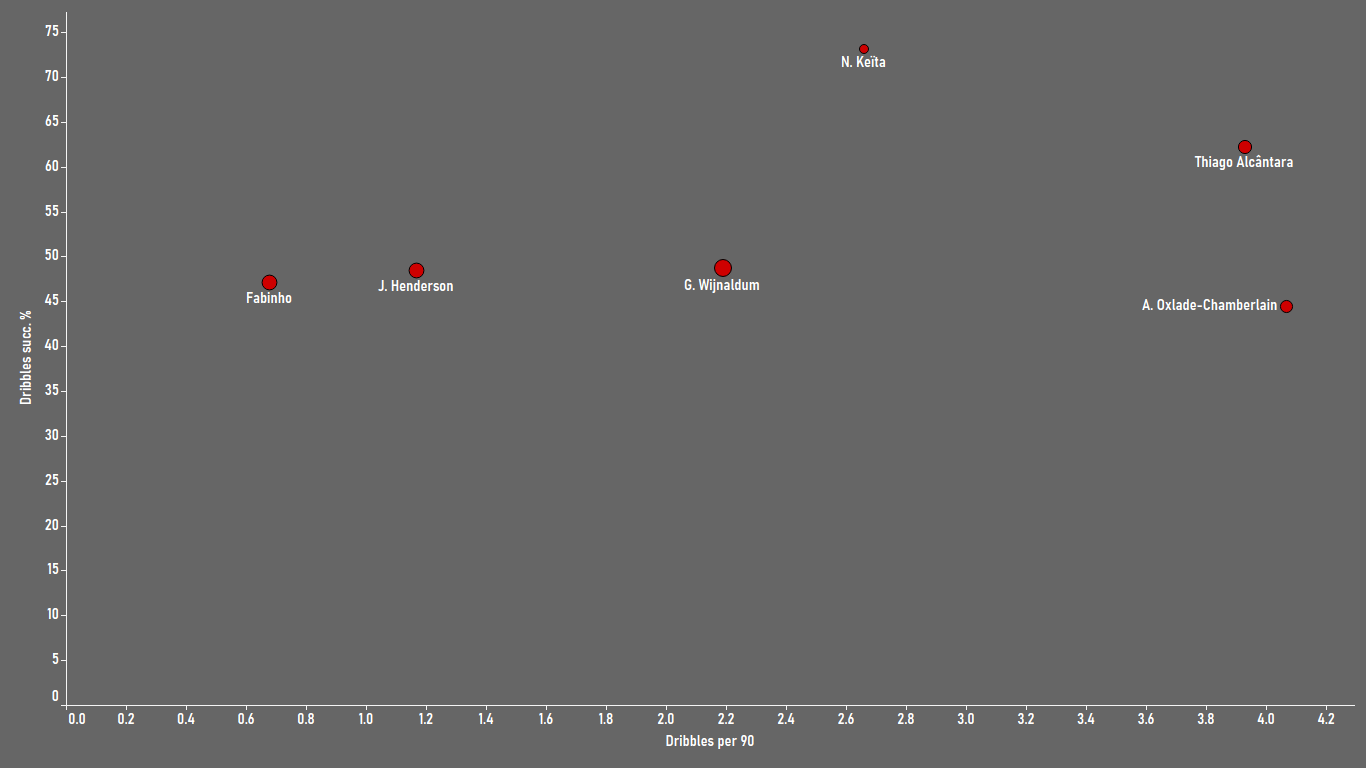 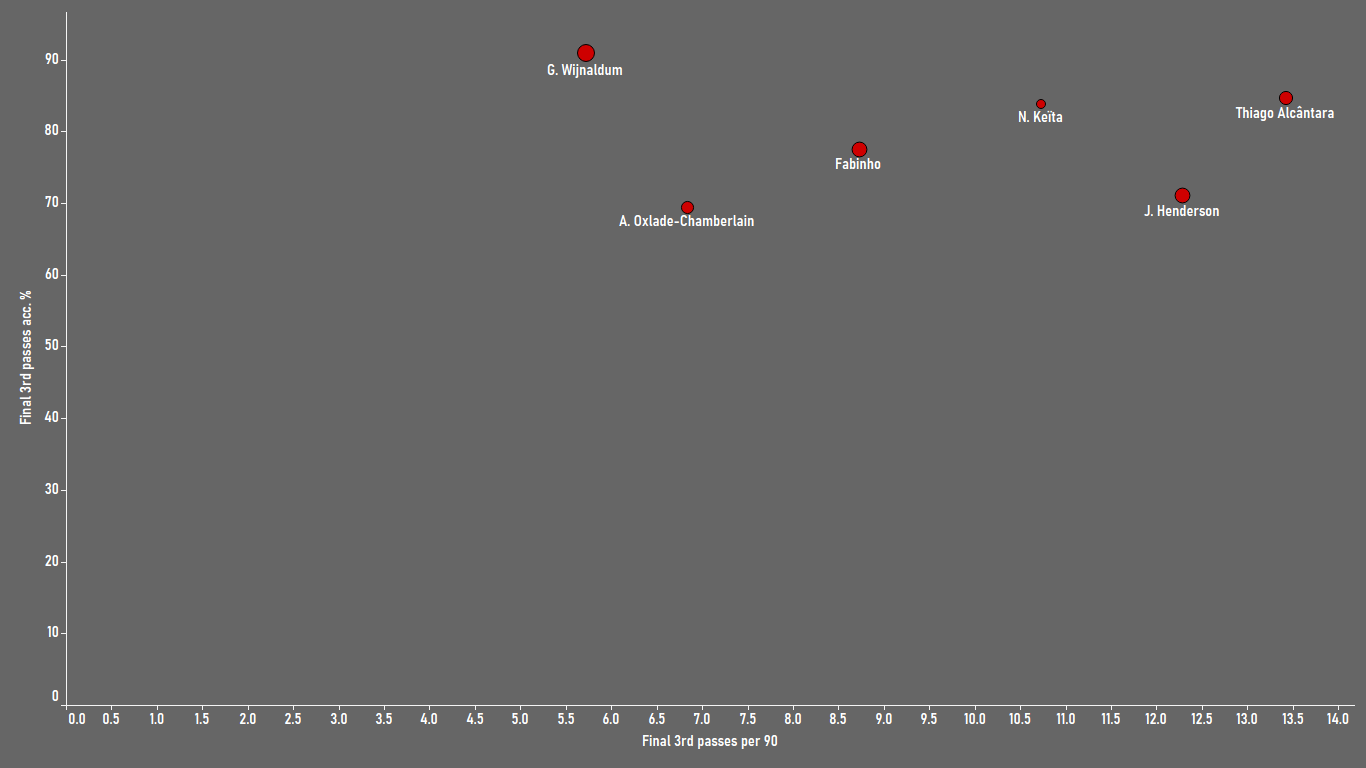 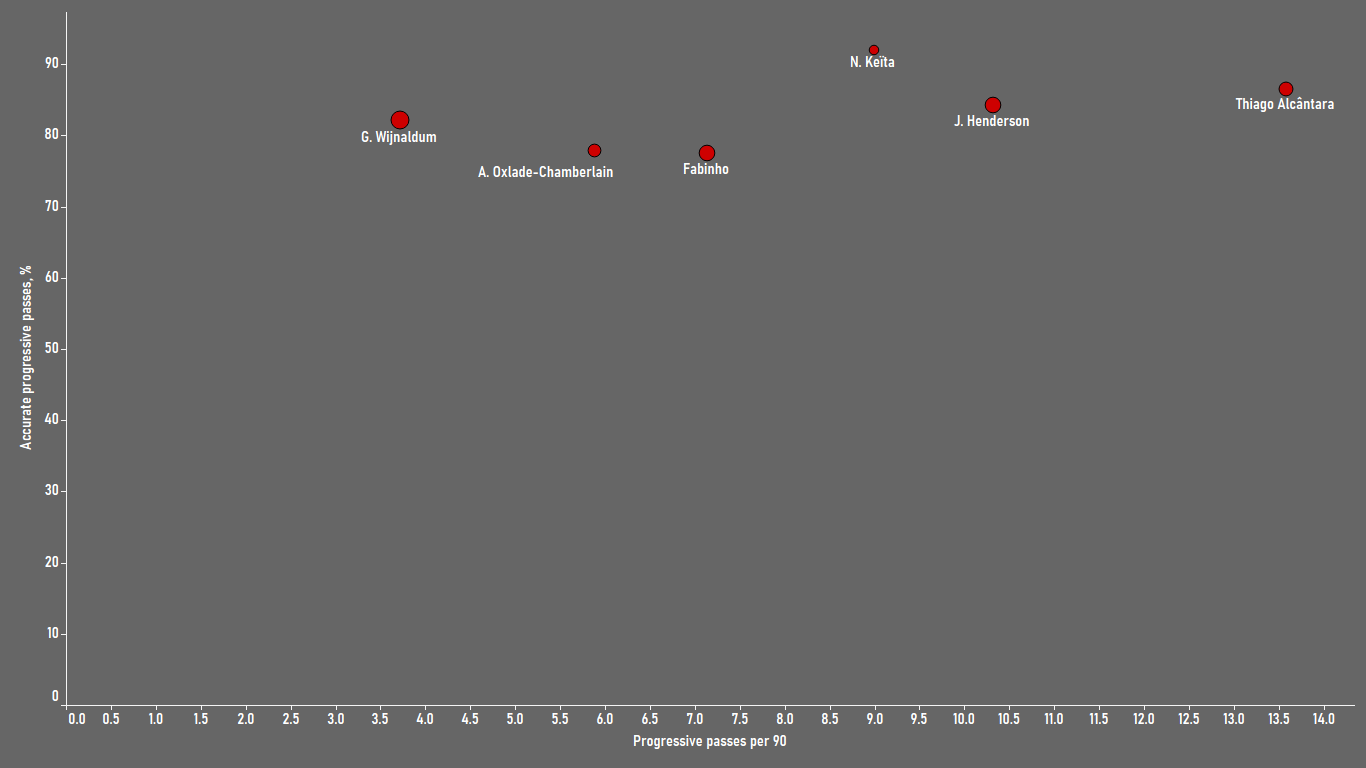 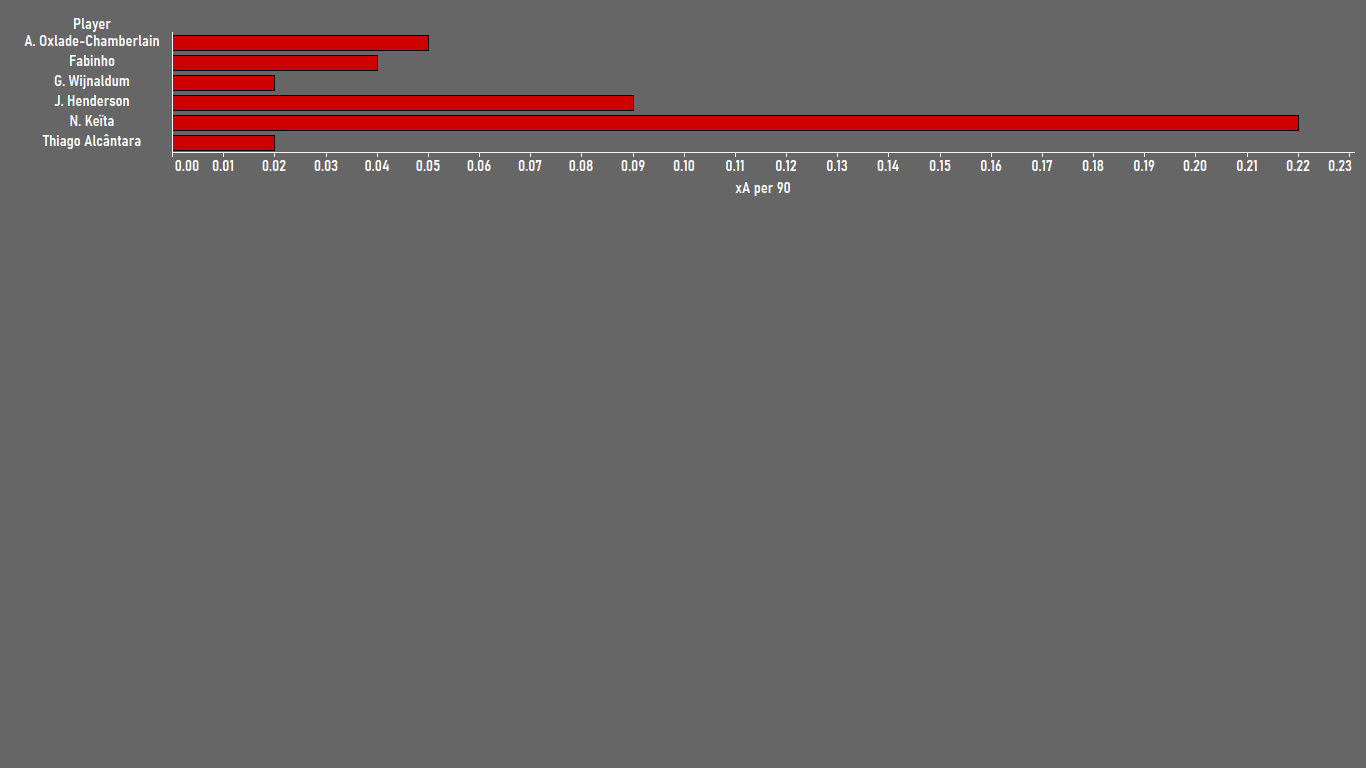 The final metric that we look at is the expected assists per 90. It is here that we see a lot of surprising data. Among the data set, Keïta ranks highest with 0.22 expected assists per 90 and is the clear outlier. Henderson is next best with a mere 0.09 expected assists per 90 while the others fall further back with Thiago having the lowest value of 0.02. It is indeed surprising to see midfielders with such low xA values considering the goal-scoring prowess of Liverpool and Bayern but this is due to the playing styles of both sides and their players.

Liverpool channel most of their attack down the wings with their heavy usage of wingers and full-backs in attack while the same goes for Bayern. The defensive midfielders often have to drop back to provide cover for the centre-backs while the full-backs push forward and even though they may have excellent passing statistics, we should understand that their passes would not always directly lead to a goal. As a result, they do not have high xA values and their contribution to the attack would not be well reflected by these statistics.

Through our analysis, we have not only seen Thiago’s playing style but also done a data analysis comparing him to the current Liverpool midfielders as well. We have seen how he has performed over the course of the last season and based on the data available, it seems like a no-brainer as to why Liverpool should sign the Spaniard.

The 29-year-old is a world-class midfielder and for just 30 million, it would certainly be a good deal for the Merseyside club. Rumours surrounding Wijnaldum’s departure for Barcelona would also open up more funds for the club should the deal go through and this may push them to wrap up the signing of Thiago. It remains to be seen what will happen in this window though, but it is certainly understandable why the Spaniard is a top target for the Premier League champions.