Thiago Silva has been a key part of PSG’s success for nearly a decade. However, everything must come to an end. This is why everything indicates that 35-year-old Thiago Silva will not renew his contract. He still has a chance to end his stay at PSG with the great triumph that could be winning the UEFA Champions League. At the time of writing, they are set to compete in the final.

It is unclear where Silva will end his career, but PSG need to be ready for his departure. This is why they need to have a replacement ready. This substitute could be experienced or a young, future star. We have made this data analysis to search for a potential replacement for Silva.

This research is based on certain data and statistics and does not evaluate other data. Therefore, this analysis serves to be a starting point to find a suitable replacement for Silva. A more detailed analysis of the players and watching them live would be needed to get a whole understanding of the players.

For this report, we will find potential replacements from centre-backs in the top five leagues. These leagues are Premier League, La Liga, Serie A, Bundesliga, and Ligue 1. We do this because these leagues contain most of the best players in professional football. This is needed as Thiago Silva has been one of the best centre-backs in Europe these seasons and so the replacement has to be of a high level.

We have also only looked at players who are 29 or younger. PSG will want their centre-back to be relatively young or to have many more years of football ahead, hence the age restriction. Additionally, the players researched have played a minimum of 1000 minutes this season, to make sure there is a fair comparison between players.

This avoids players having inflated statistics because maybe a centre-back has played fewer minutes, and so, has better stats, but this does not make him a better player. 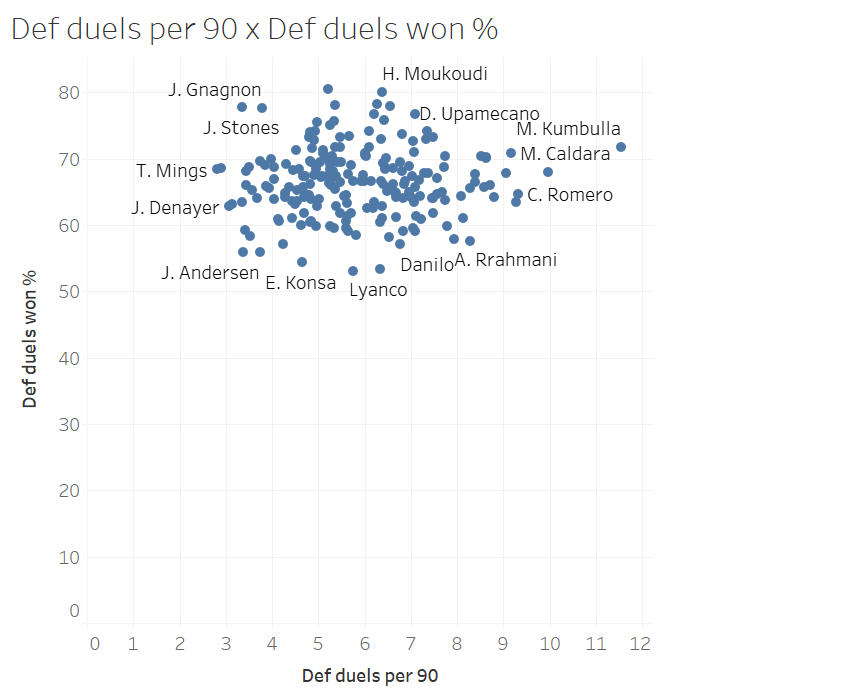 To use him as a benchmark, this season Silva made 3.85 defensive duels per game with a 71.83% success rate.

The player from Ligue 1 with decent numbers and who has the second-highest success rate is Harold Moukoudi from Saint-Étienne. He makes 6.38 defensive duels per game with an 80% success rate. 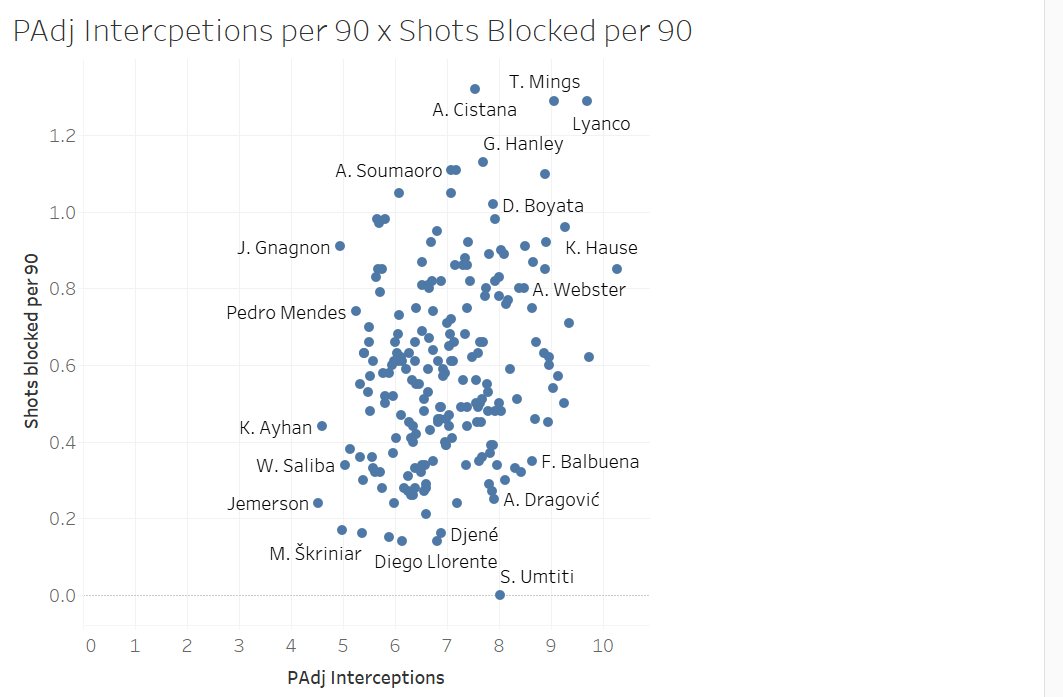 To be a solid defender, you need to be an intelligent player and read the game correctly. If so, making interceptions to disrupt the opponent’s play becomes easier. This is especially important for a PSG defender who has to quickly stop the opponents before they can start a counterattack.

To measure this, we will use PAdj interceptions. Possession-adjusted metrics are a method to calculate defensive statistics that take possession values into account.

As for shots blocked, it proves a centre-back’s positioning and defensive ability. For a PSG defender such as Silva this is useful because the few times that the opponents reach PSG’s area, no danger can be created.

Once again, we will use Silva’s statistics as benchmarks. He makes 8.1 PAdj interceptions per game and blocks 0.87 shots per game.

Lyanco Evangelista from Torino has the best combined numbers here. He makes 9.68 PAdj interceptions and 1.29 shots blocked per game. Both of these statistics are higher than Silva’s. 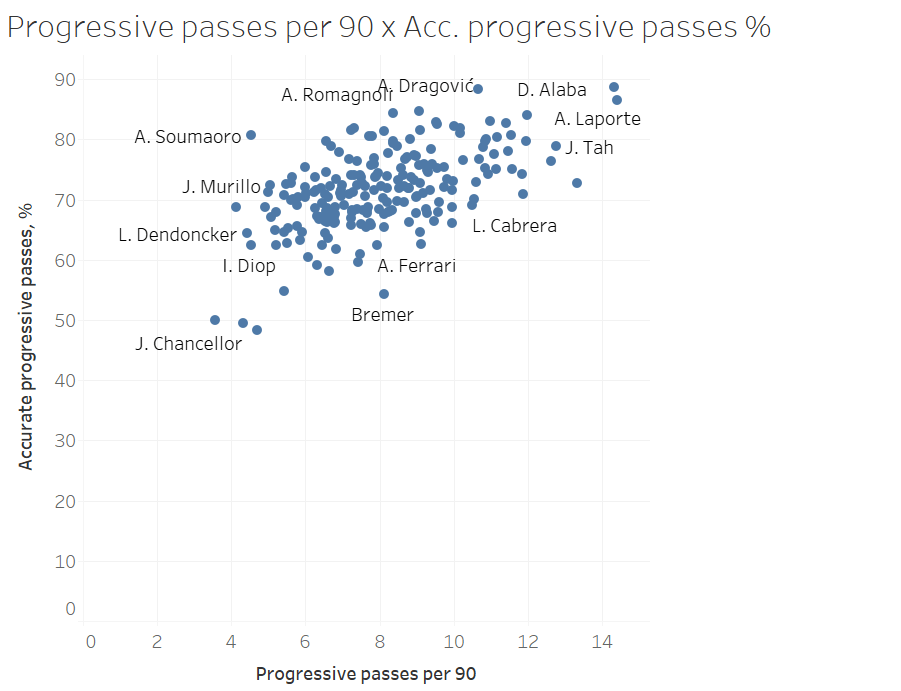 Moving on to the passing metrics, this is probably one of the key metrics in deciding the replacement for Silva. A progressive pass is a forward pass that attempts to advance a team significantly closer to the opponent’s goal.

Since PSG control possession, it is mostly the centre-backs who start the build-up. The PSG centre-backs need to be gifted on the ball and have a great passing ability to dominate possession in games.

In this aspect, Silva has amazing statistics. He makes 11.87 progressive passes per game with a success rate of 90.41%.

Another player with good stats is Upamecano who makes 11.95 progressive passes per game with a success rate of 79.82%. 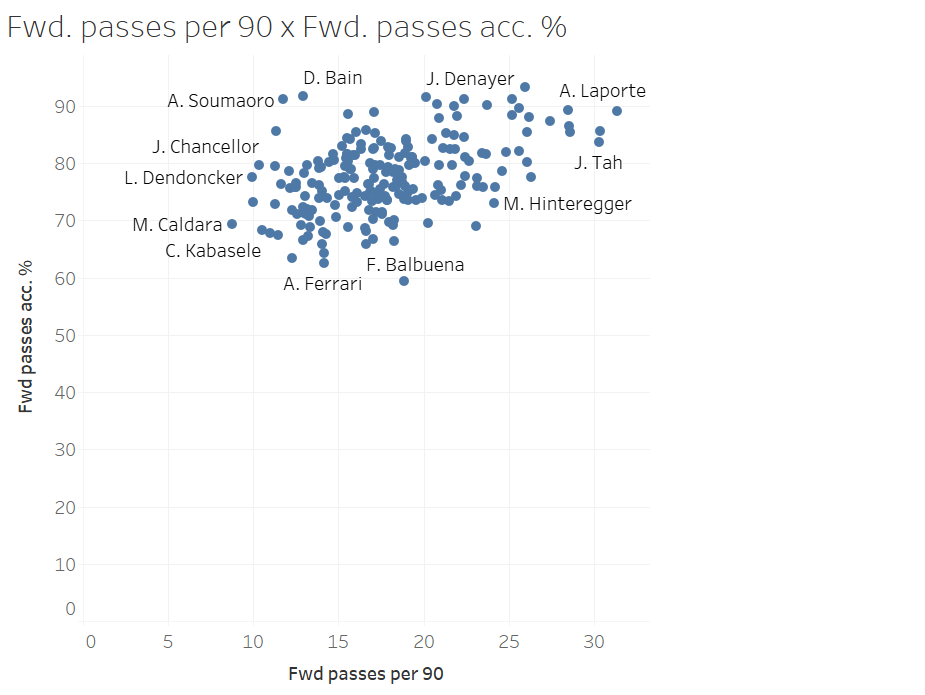 Forward passes are meant to break lines. They are used to cut through the opponents by passing it through them and so create danger through the middle. For PSG, these passes in a centre-back are important as they try to connect with the talented attackers as much as possible.

When Silva has the ball, the first option he looks for is a forward pass that breaks through the midfield line to pass into the attack. He makes 27.63 forward passes per game with a success rate of 92.35% which is impressive.

After this data analysis, we have found three centre-backs that PSG could concentrate on to replace Silva.

The first suggestion is Laporte, from Manchester City. Since he is from a team that also dominates possession in their league, the transition would be easier. The statistics where he does best in concern his passing ability. He is also 26 years old, meaning he is still relatively young.

He was the second-best in the metric of progressive passes and the best with forward passes. This is very important since Silva also had high statistics for these metrics. Laporte had a lower success rate than Silva but also made more passes.

Moving on to his defensive statistics, he also makes few defensive duels (3.56) because his team usually has the ball so there is less need for defensive actions. However, he needs to improve in his success rate (65.22) because a PSG centre-back needs to be more decisive when he intervenes, to swiftly cut out an opponent’s attack.

He also makes 6.24 PAdj interceptions per game and blocks 0.31 shots per game. He needs to improve in both aspects. Nonetheless, this statistic might occur since Manchester City is vastly superior to many teams they play and so, the opponents attack less. Therefore, there would be fewer chances to fulfil these metrics.

Alaba has the same situation as Laporte. He is from a team that won the league in the Bundesliga and is used to control possession. This is why he also does best in his passing ability. Moreover, he is 28 years old, meaning he is an experienced player.

He was the best in the progressive passes and second-best in his forward passes. This proves he is used to building up from the back and being decisive in his passes to advance Bayern Munich’s play. This is exactly what is needed at PSG.

Alaba makes the same PAdj interceptions as Laporte (6.24) but blocks fewer shots per game (0.27). This is another factor he should improve in to be the perfect replacement for Silva.

The RB Leipzig centre-back is by far the player with the most potential as he is only 21 years old. If he is lacking in some metrics, he has plenty of time to improve them but the fact that he has great stats already shows his talent.

The metrics where he did the best were in his defensive duels and his progressive passes. Contrary to the other two players, he is not from a team that usually dominate games. This is why he makes 7.09 defensive duels per game with a success rate of 76.65%.

This means he makes more defensive duels than Silva and still manages to have a higher success rate than him.

He does worse in his PAdj interceptions (7.56) and shots blocked per game (0.5), with both metrics being less than Silva’s. As for forward passes, he also has lesser stats than those of Silva (25.6 forward passes per game with a success rate of 82.14%).

Even though he has good numbers in these metrics, they are still not to the level of Silva but as mentioned before, he is young and has time to improve.

This data analysis has shown us some useful metrics to measure PSG centre-backs. A PSG centre-back is meant to be decisive in his defensive duels and should have the technical ability to succeed in his progressive and forward passes. These metrics are essential for a team that dominate possession and can replace a PSG legend such as Silva.

This analysis also gave us three players which could be viable potential replacements for Silva. It is clear that Silva is a valuable player for PSG but if he was to be replaced by any of these three, that centre-back position would be well covered. Laporte, Alaba, and Upamecano are all quality players who have more than enough quality to replace Silva.