Patrick Schick: How the Bayer Leverkusen striker has started the season in red-hot form – scout report

Bayer Leverkusen’s Patrik Schick caught the eye in the European Championships this summer. He scored the goal of the tournament, with an audacious attempt from long distance rifling into the Scotland goal; one of two goals he scored that day. Schick didn’t score in the group stage against England but went on to score against Croatia, the Netherlands, and Denmark in a run of games that took the Czechs to the quarter-final of the tournament before losing to the Danes. For fans of German football, Schick’s quality on the world stage came as no surprise.

Schick, initially spending time with RB Leipzig, scored 10 goals in 22 Bundesliga games in the 2019/20 season, but despite this never felt like a long term answer for Leipzig. This was enough to convince Leverkusen to part with £23.5 million for his services in the summer of last year, and Schick repaid this faith with 13 goals in all competitions in his first season.

He has started this season well, scoring four in his first five league games, with Leverkusen starting the campaign with a goal frenzy, only behind Bayern Munich and Borussia Dortmund for goals scored at this early stage. This tactical analysis and scout report will give an in-depth analysis on Schick’s tendencies as a striker, whilst also giving insight into how he fits into Bayer Leverkusen’s tactics.

Given Schick’s large frame, he naturally fits the bill of a traditional target man. And he certainly has the assets to back this statement up too. Statistically, he performs respectably winning 37.9% of his 5.19 aerial duels per 90 in all competitions this season.

If players are willing to run off of Schick’s shoulder, then he will oblige by winning headers and helping the ball on. However, he shows excellent awareness of where his teammates are as the ball is in the air, as well as the positioning of the defenders and specifically the proximity of his marker. Schick can adjust accordingly and can bring the ball down and hold up play when many forwards would simply look to head the ball on.

In the example shown below, he shows outstanding ability to bring the ball down on his chest, and hold up play before finding a pass option. As we can see in the image, there is no obvious immediate pass option for him to help the ball onto with a header. 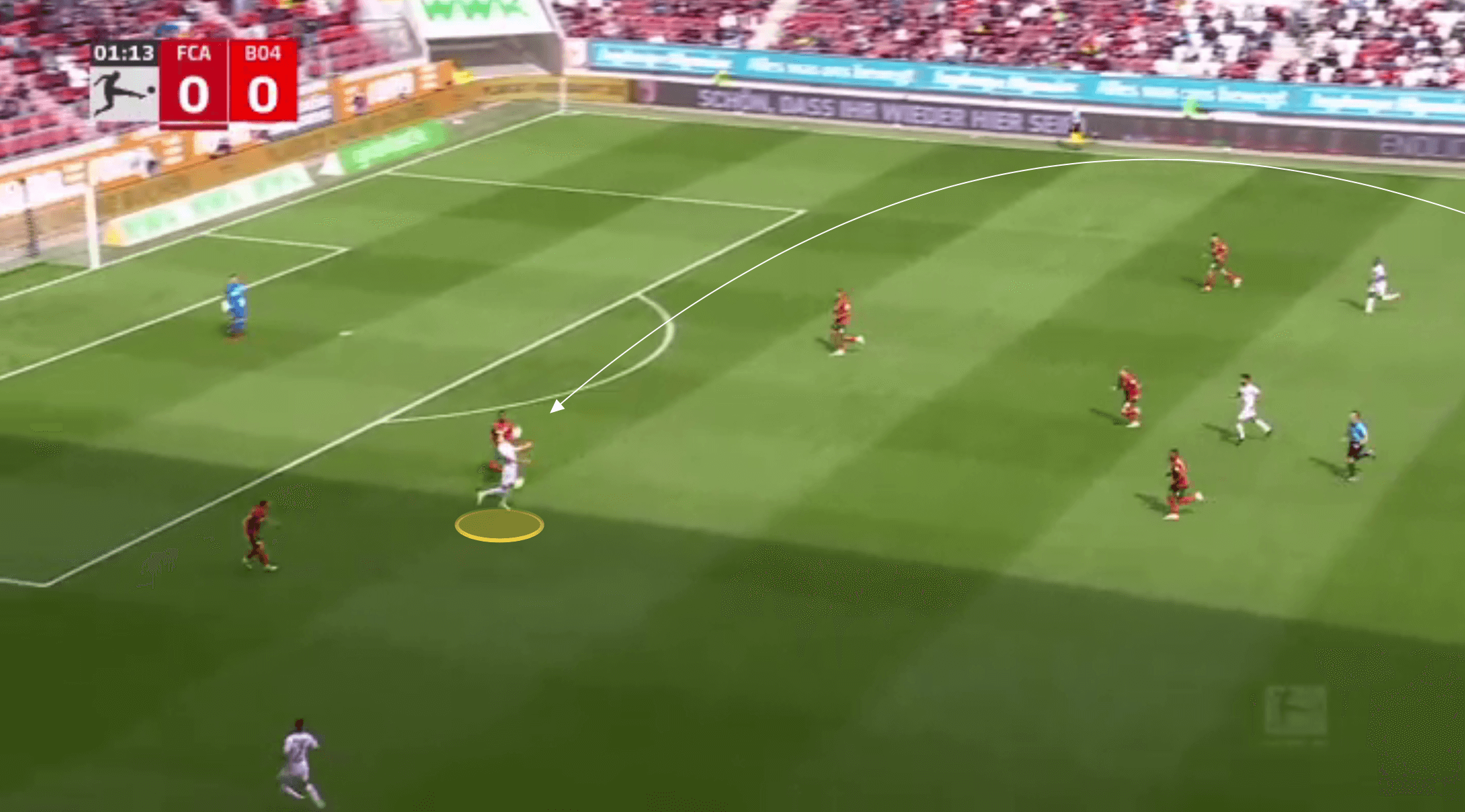 Schick is able with the ball on the floor too. Whilst he provides a viable option to hit the ball too aerially, he has a good first touch and can play first time with either foot. If he senses pressure he plays off of his front foot or may look to receive with a flat body position. He can accurately shift the ball either side of him over short to medium distances with a first-time pass. We can see this occurring below. However, Schick doesn’t panic in possession and can receive, hold play up, and find a nearby teammate whilst under pressure. There are occasions where for a man of his size he could do a better job holding up possession though. 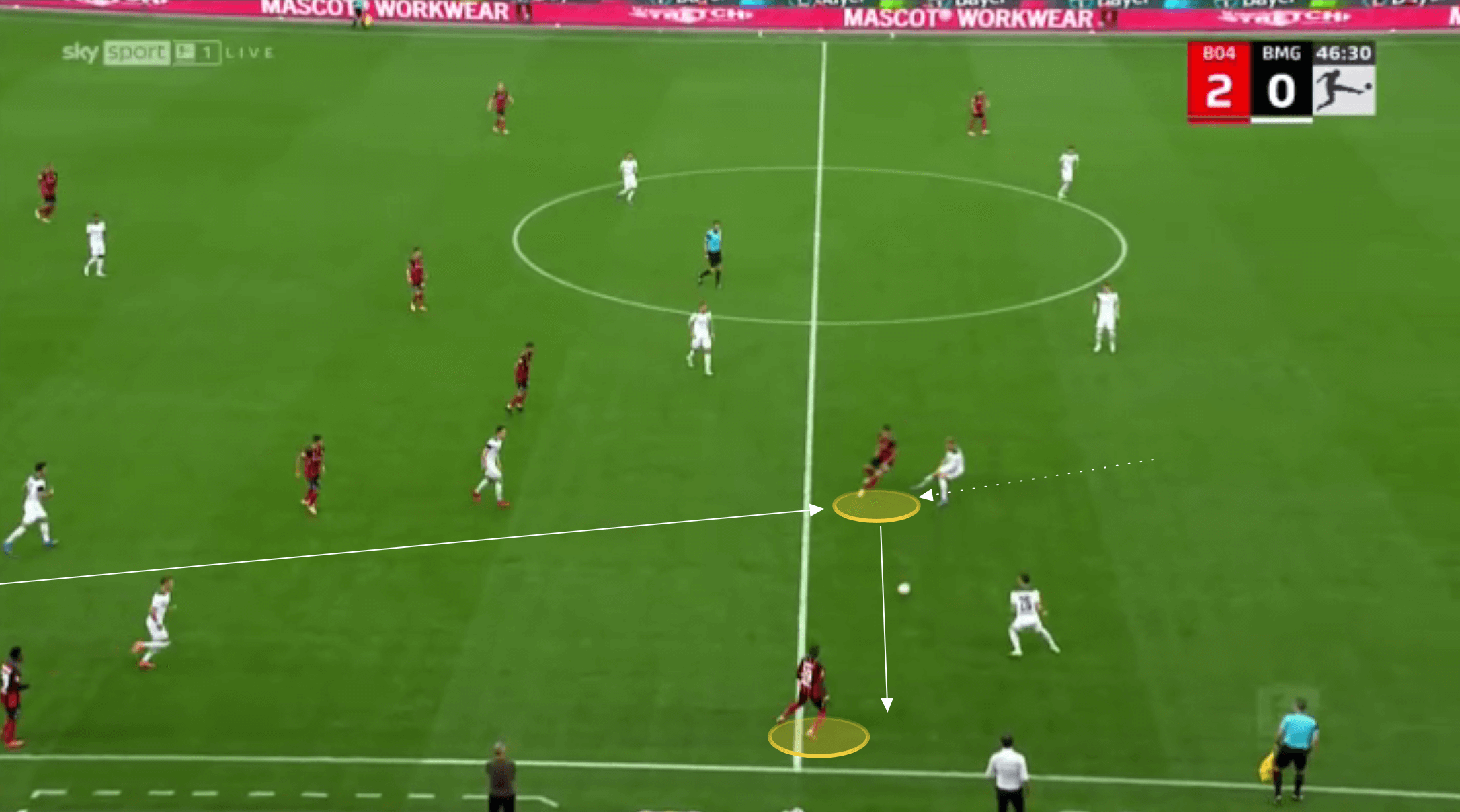 Schick does scan before receiving but also uses his arms to feel for pressure behind him. He consistently assesses space correctly, and if he has time and space to turn he will receive the ball on the half-turn.

Schick will drop well inside his half at times to get on the ball. Whereas more traditional target players might lead the line and play man-on-man against the centre-backs for the majority of the game, Schick is given more freedom by Leverkusen to drop into deeper areas as he sees fit. He can evade tight marking to receive between the lines, and from these areas he may choose to break the last line with a through pass. 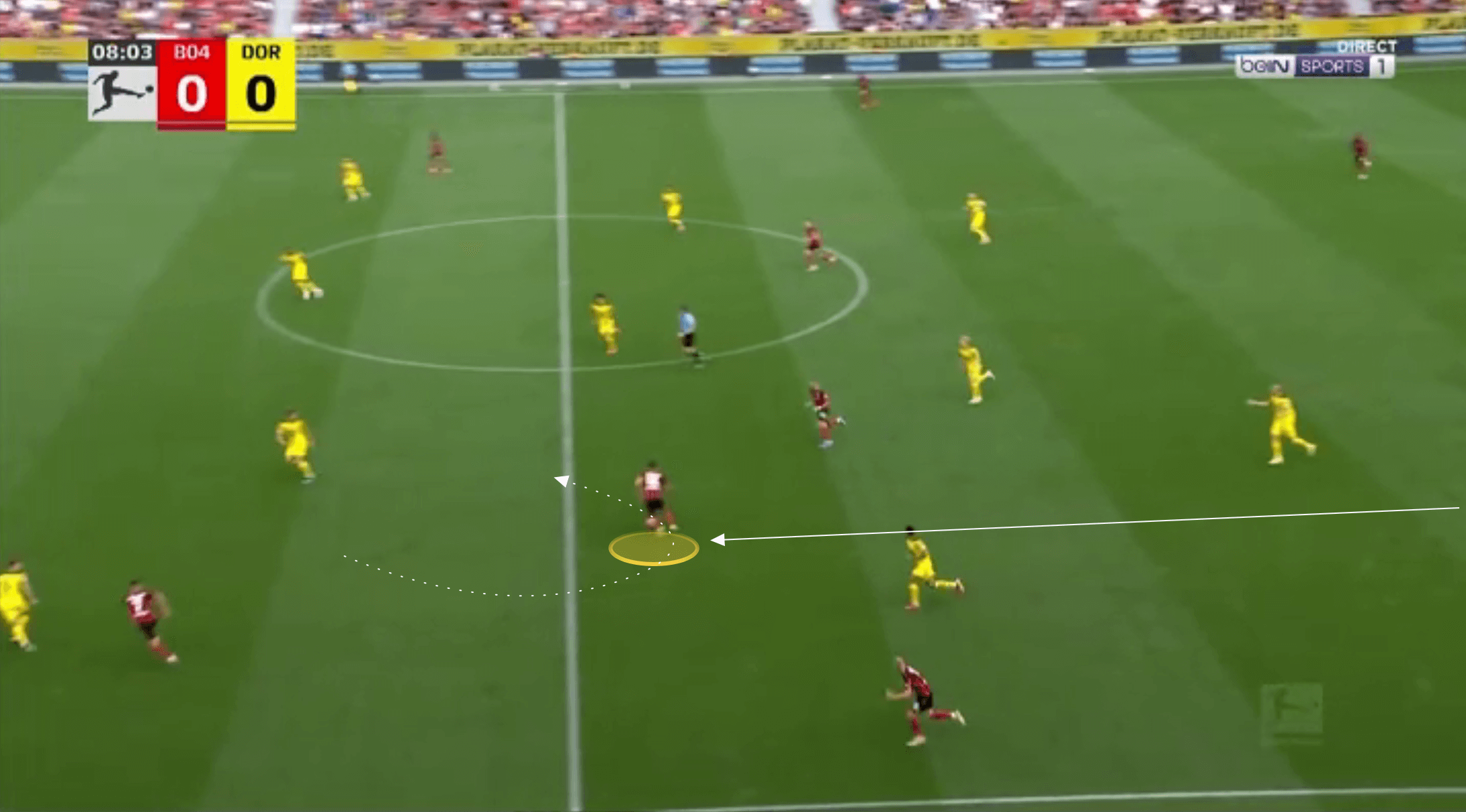 Schick is far from being some kind of uber-physical and immobile centre-forward. He has a lean frame, and a deft touch in possession. He can receive line-breaking passes and play first time, as already mentioned, but he can also unlock defences with innovative passes and good vision. 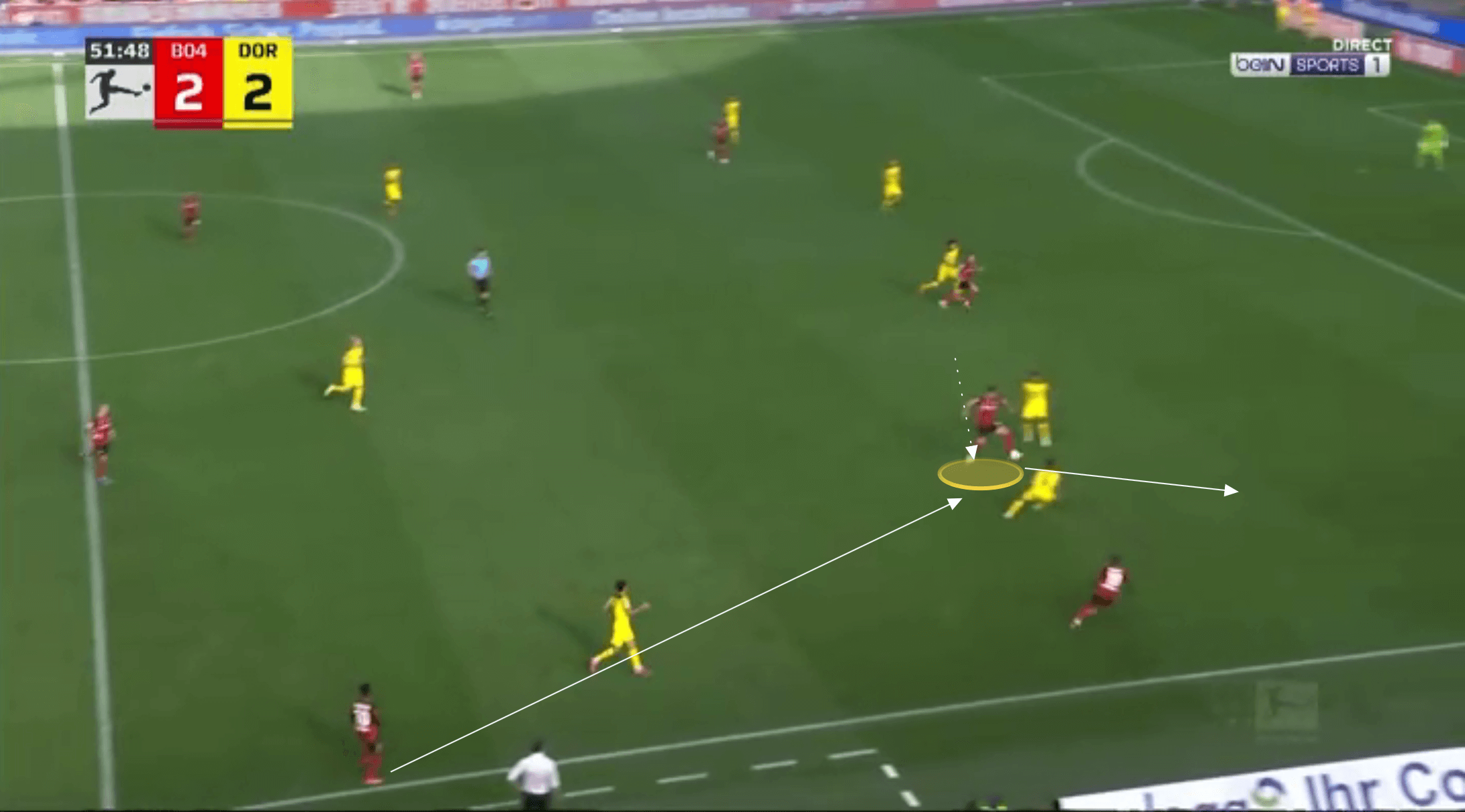 Schick has quality holding the ball up with dribbling ability as well. He keeps the ball close as he dribbles, and is better at navigating tighter areas than he is driving forward on the ball. Schick will slow down possession if not supported when on the ball. He shows excellent awareness of oncoming pressure and senses when to move into certain areas of the pitch with the ball. Against Augsburg in the image below, he checks back on himself, changing direction quickly, and throwing the defender tracking back off of him completely, before playing a pass. 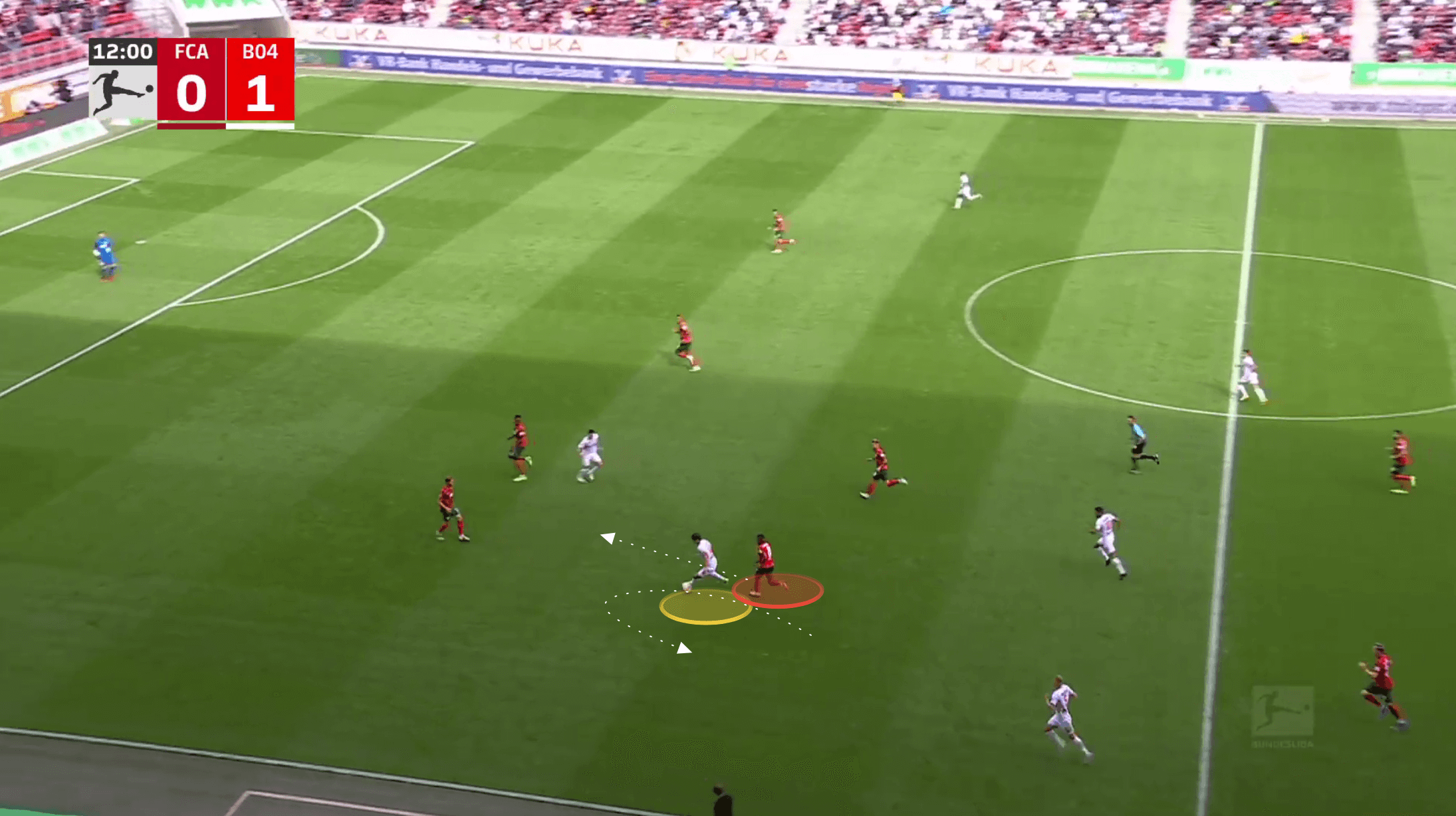 Schick is more of a goalscorer than he is a creator – there is no questioning that. However, he shows some quality in finding teammates with a final ball. He isn’t consistent with his quality when splitting defences with a through pass, but he has good awareness of where teammates are making their runs, and what spaces to play them into. Given his ability to create enough space between himself and his marker, he often finds himself in positions like the one in the image below, where he has the space to either drive forward or play in a teammate. 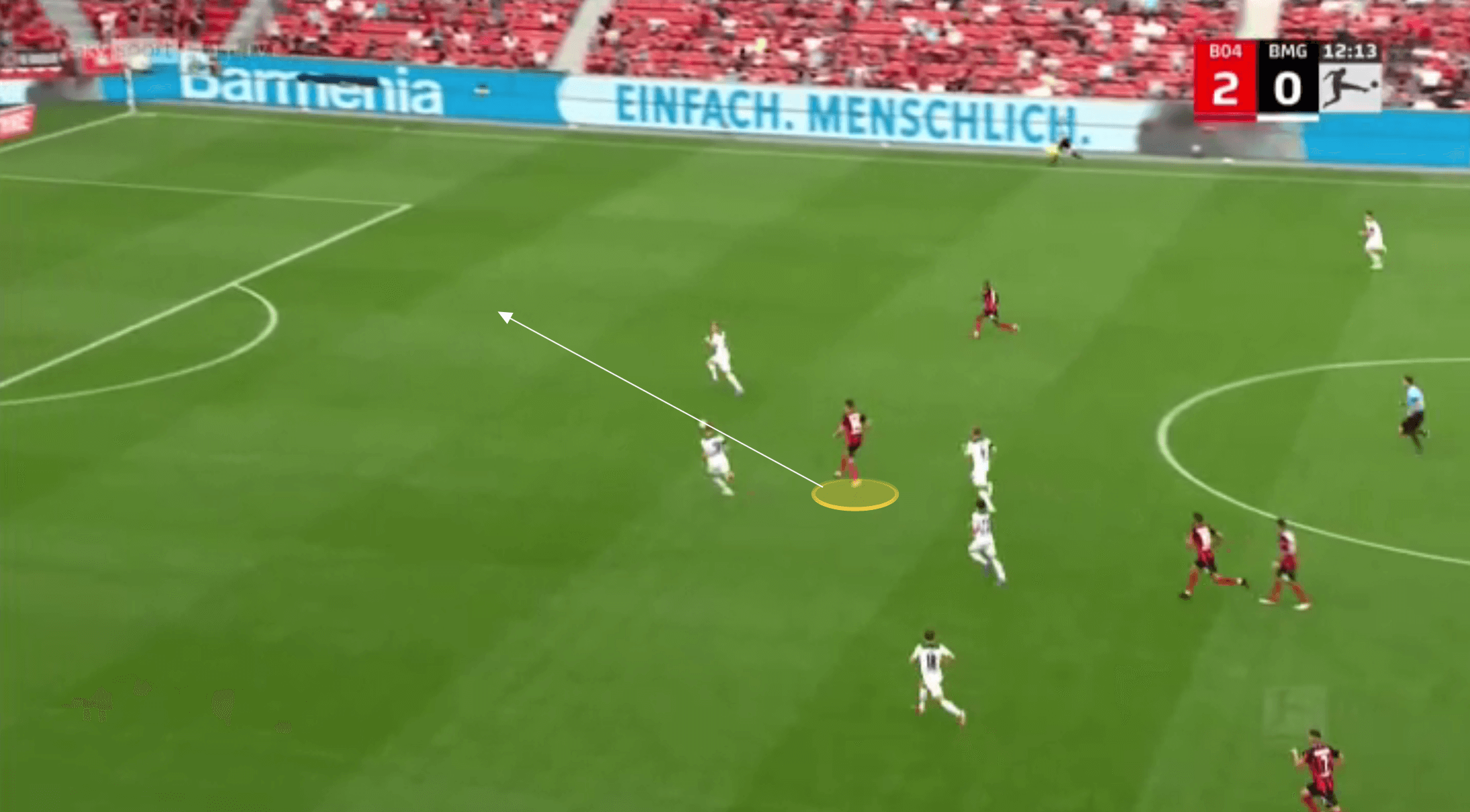 Schick will use his body to back into defenders tracking back, as forward passes are played into him. He can create contact between himself and the defender. If receiving in an area where he is outnumbered and there are limited forward options he will use this as a chance to win the free-kick and have Leverkusen be able to structure an attack from a dead ball situation. However, he also uses this to give himself time on the ball, and therefore create time for his wide attacking teammates to make runs in behind. In the image shown below, he retains possession and gives the attackers either side of him valuable seconds to continue pushing forward into attacking positions. 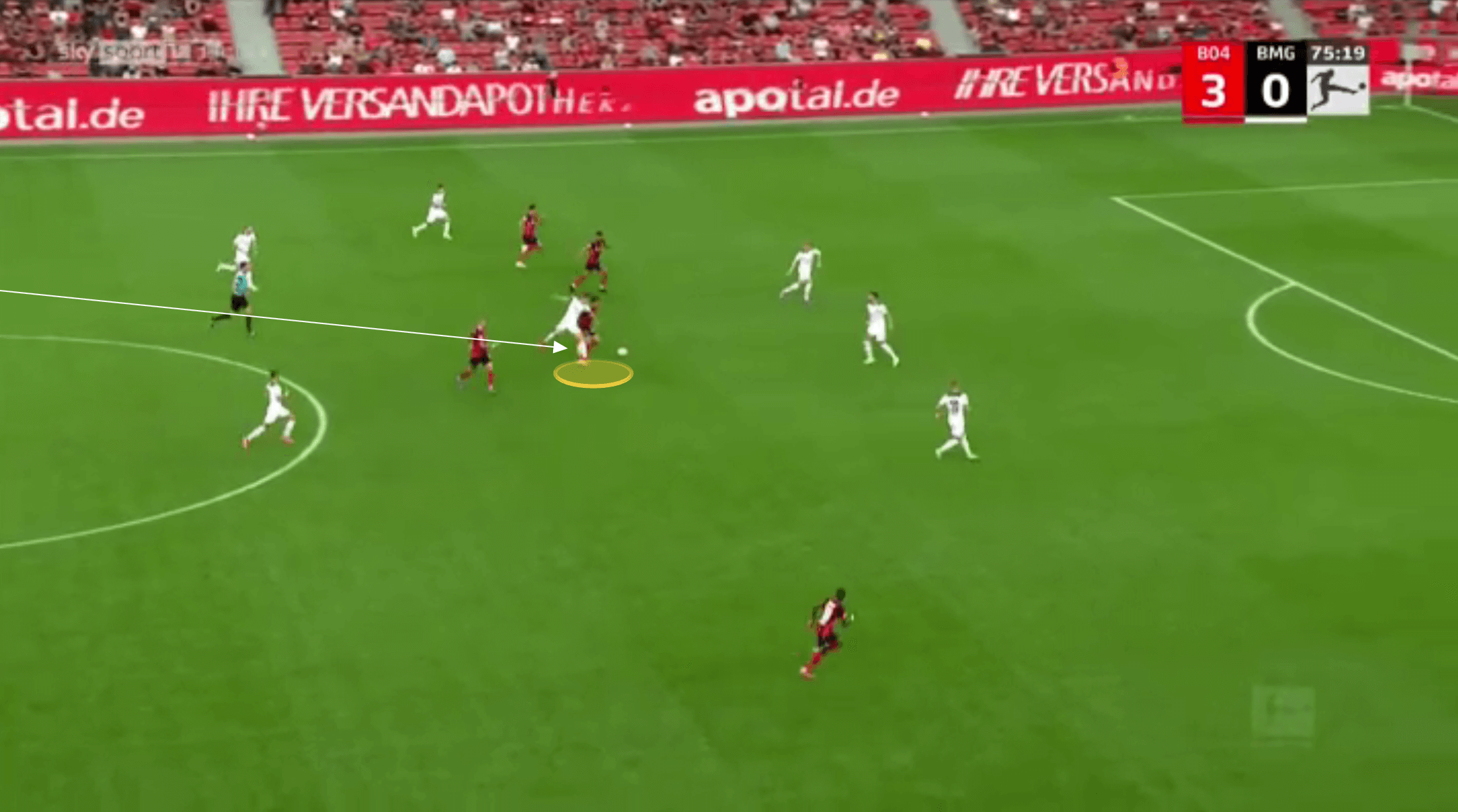 However, Schick is perhaps at his best in crucial moments in the final third. He demonstrates a cool-headedness in moments where others may panic and look to immediately shoot or attempt a final ball. Schick can give the impression of having all the time in the world, despite being in a time-sensitive, pressured moment.

A prime example of this occurred against Augsburg earlier this season, where Schick timed a run in behind perfectly, arching his run away from his marker into the space behind the centre-back who had been drawn towards the ball. 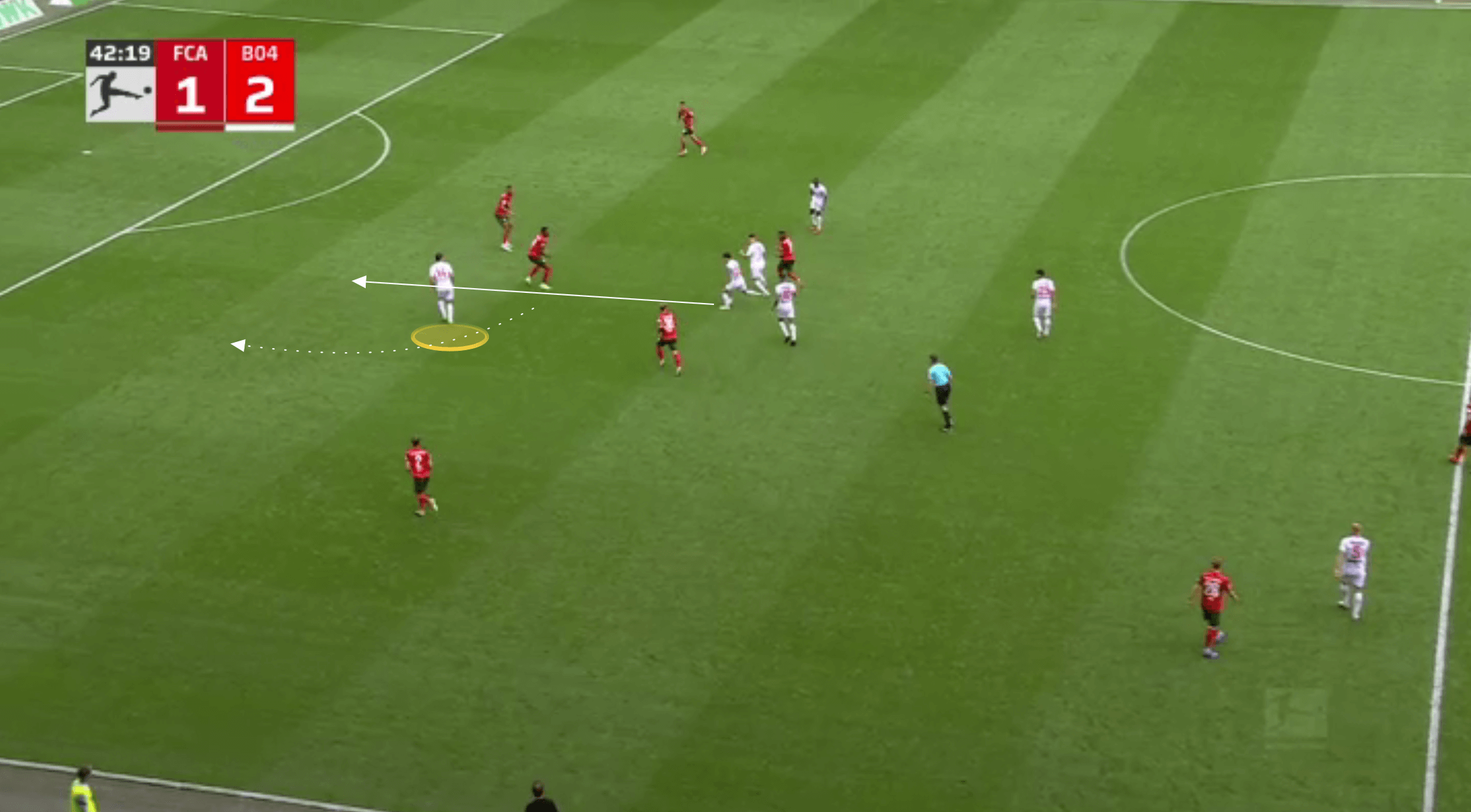 Schick was played in behind and initially rounded the Augsburg keeper, but decided the angle was too tight to finish from. Instead of attempting the shot, which would have been highly difficult to score from, Schick showed the composure to cut back onto his right, forcing him to have to round the goalkeeper once more. From this position, he was then able to find the winger arriving on the far side of the box, who was able to score. 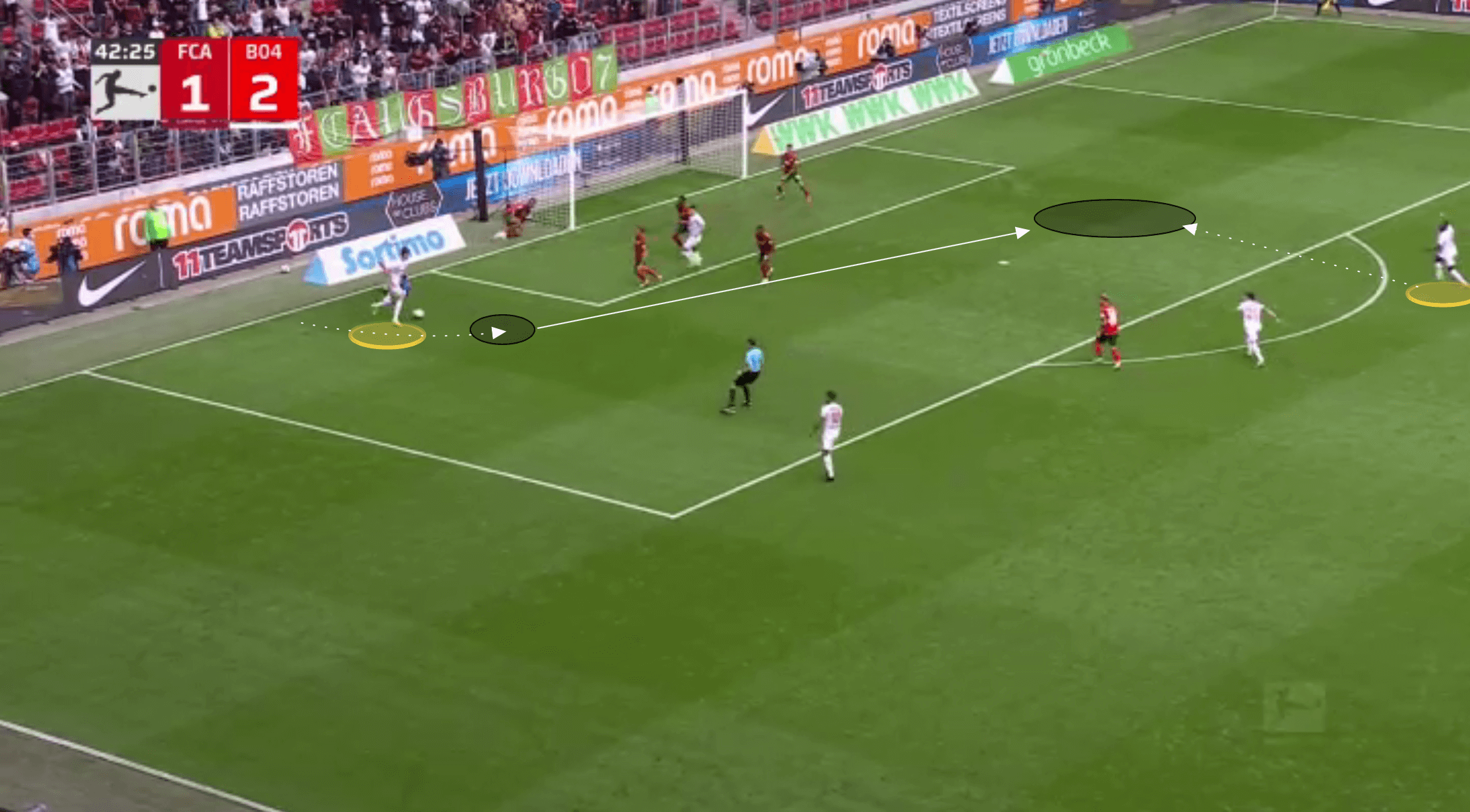 Schick has never been a prolific goalscorer, and yet he shows excellent technique when striking the ball, and has composure in the final third indicative of a “natural” goal scorer.

One of the clear issues Schick has in front of goal is the difference in quality between his finishing with his right foot and his favoured left foot.

On his right, Schick can snatch at chances, and in general, can lack accuracy. He can miss the back post by a distance, or unnecessarily strike the ball at a height in a 1v1, like in the image below, a chance he would no doubt have finished if he had been on the other side of the box, shooting with his left. 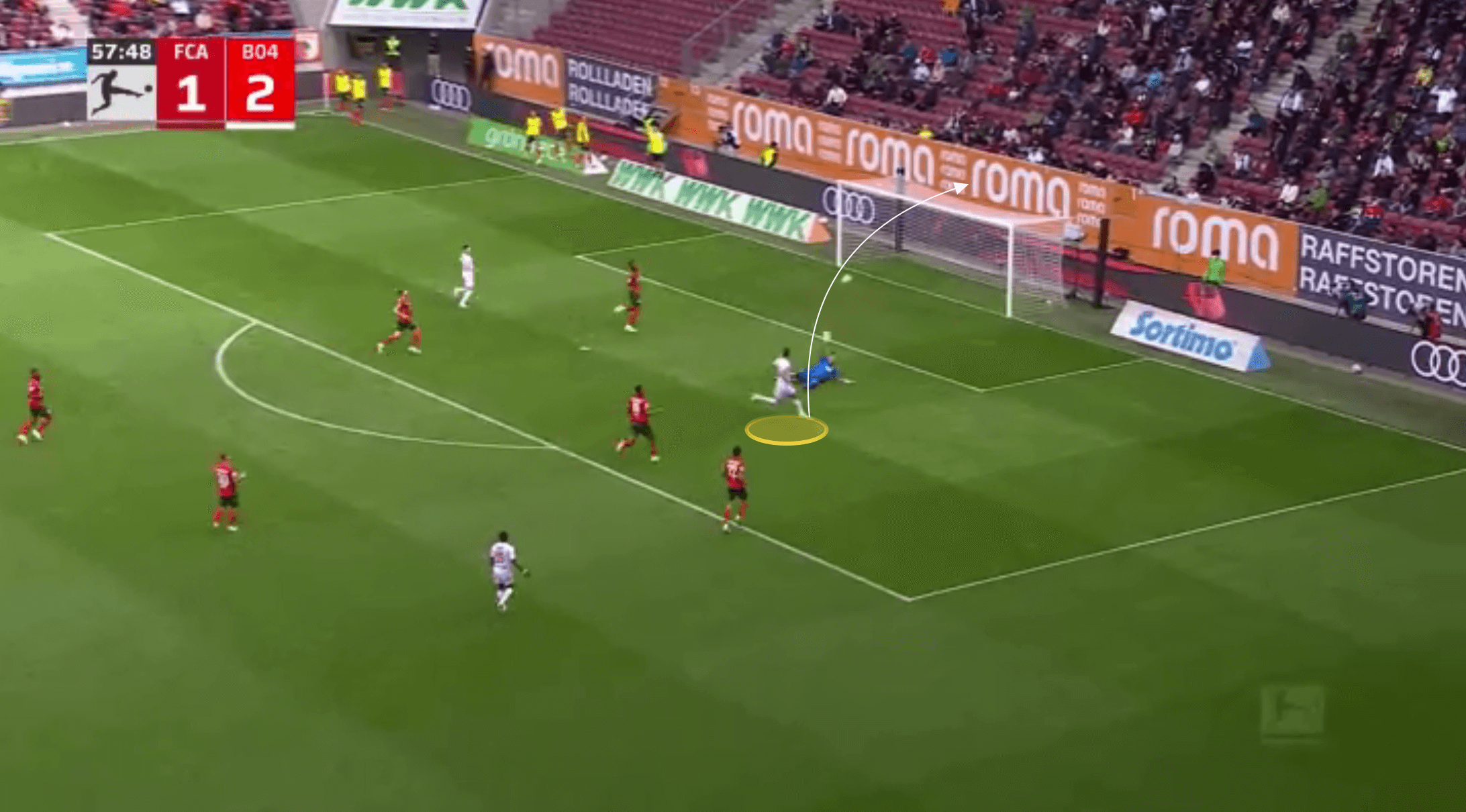 And yet with his left foot, he can finish with power and placement, and can score from more difficult angles, or “half-chances”. Some of his goals already this season have been strikingly impressive.

From the same game as the previous example, Schick was able to score 15 minutes later, hitting the top corner from the edge of the box with his left, and putting the game out of Augsburg’s reach. 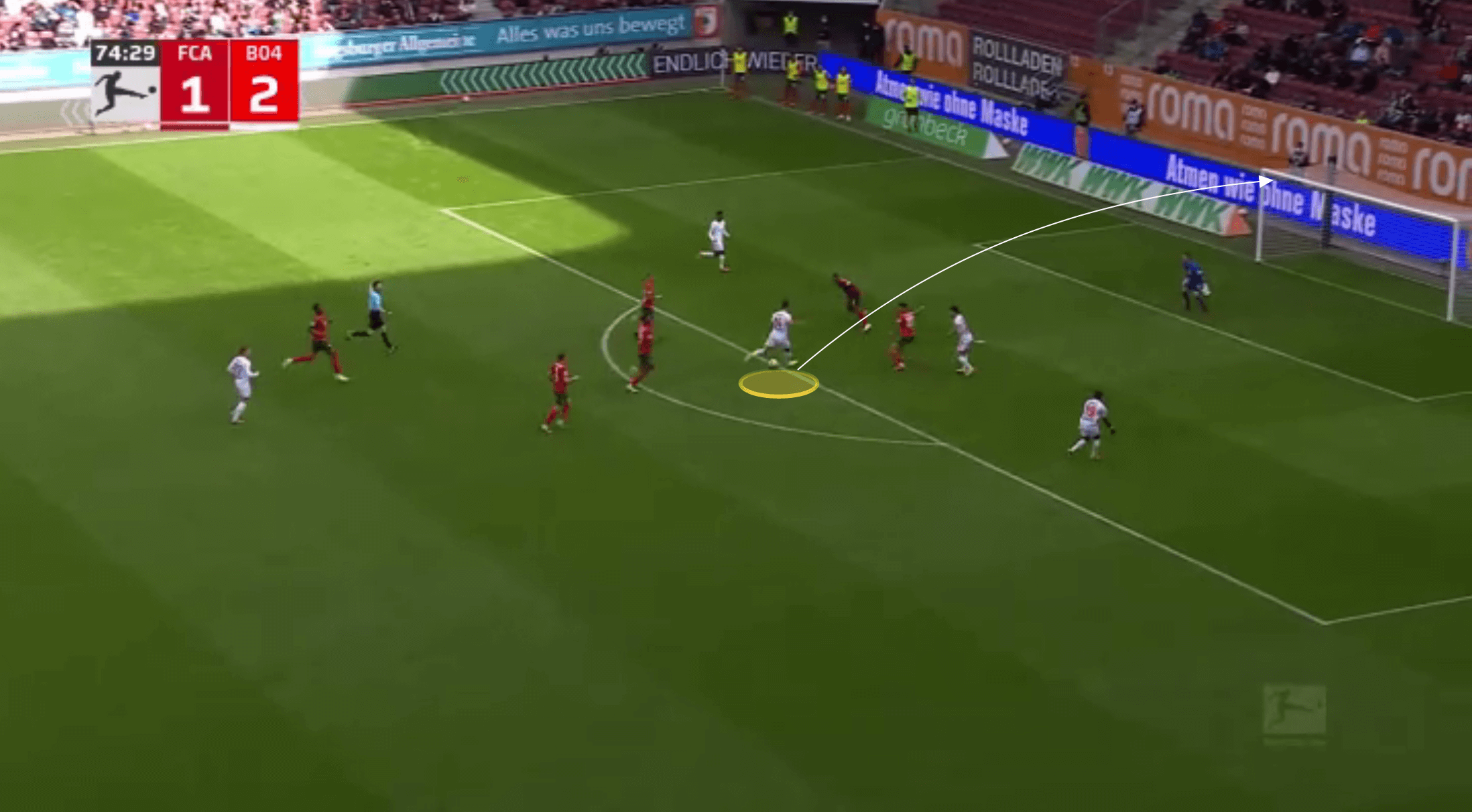 Schick is accurate with his left and can pick out corners in a 1v1 situation against a goalkeeper. He times his forward runs well and will keep himself onside as the ball-carrier draws the defender forward, like in the image below.

In the goal-frenzy loss to Borussia Dortmund, Schick was able to finish comprehensively from the angle shown below. 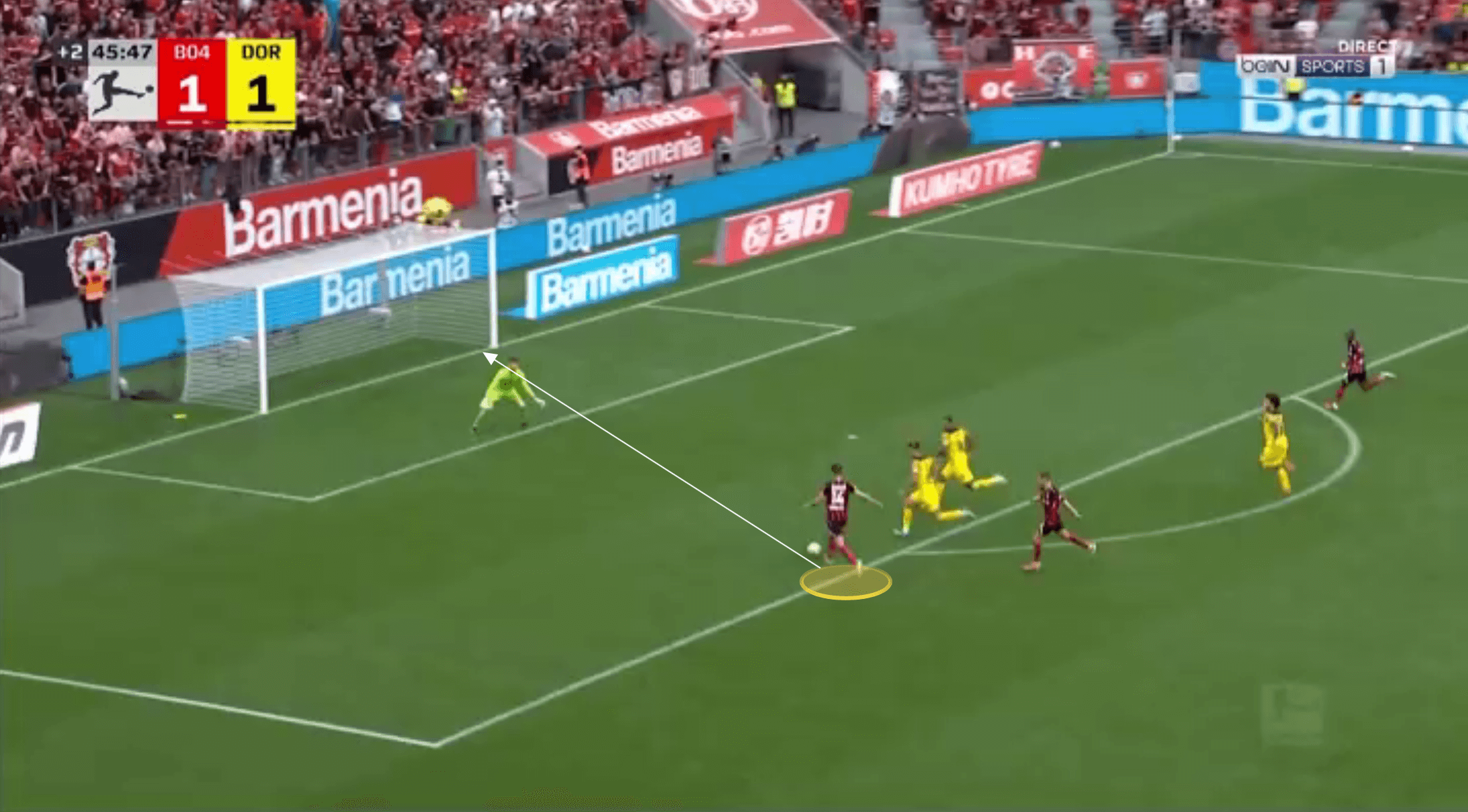 Schick is deceptively quick and as a result, can be a threat in behind too. Along with his quality timing of his runs, he is difficult to defend against, particularly if the centre-backs in question aren’t blessed with pace.

If Schick can be found with a through pass, and find himself in a 1v1 against the goalkeeper (on his left), he has a very good chance of scoring. 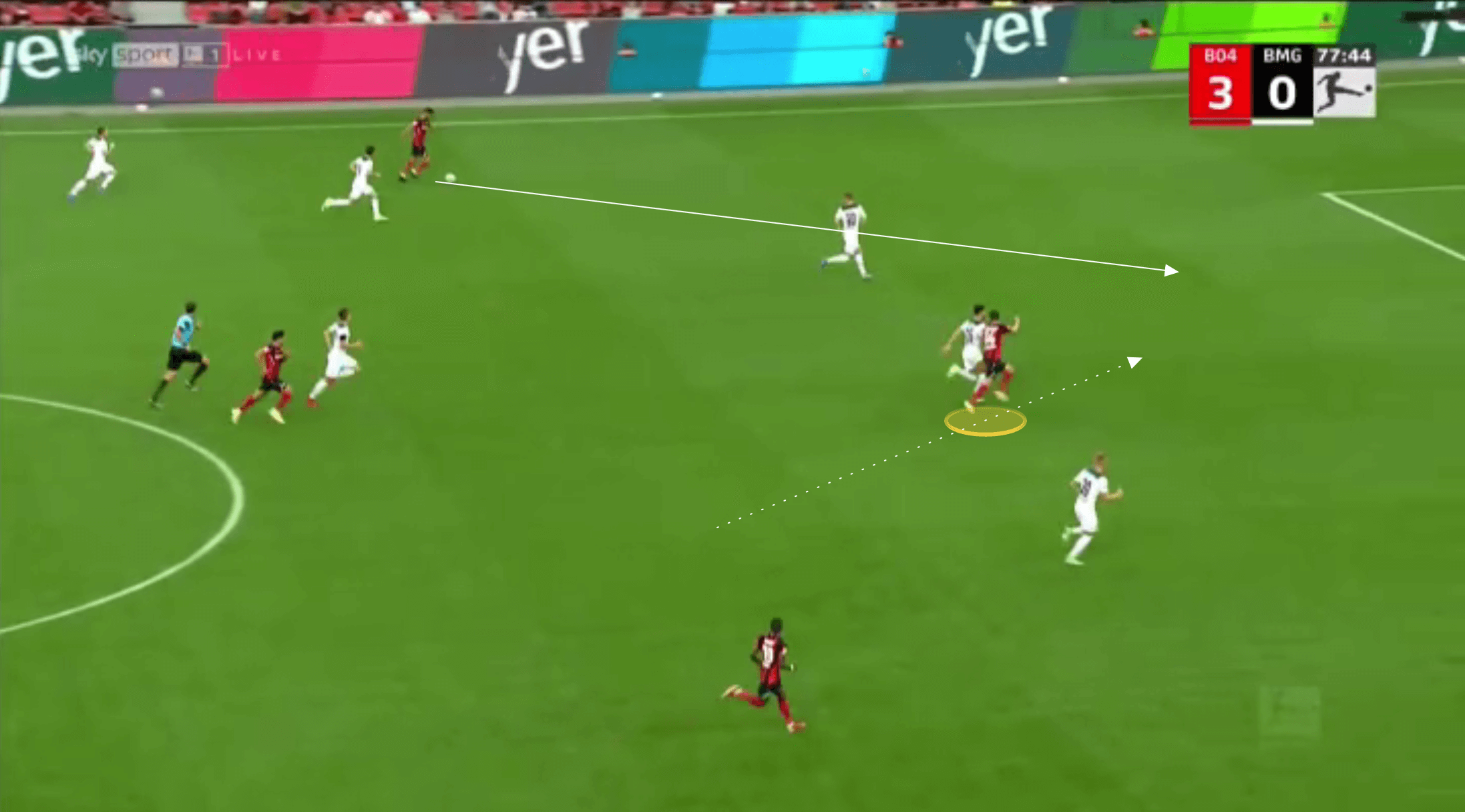 With this timing and this pace, Schick will make darting runs further forward, inside the area. If the ball is out wide, Schick will hold his position initially, before making a late run, most often towards the ball. Schick looks to move forward at an angle and beat his marker with a glancing header, or just by getting to the ball first and directing a volley towards goal. He generally prefers to do this over going to the back post. By moving to the back post he potentially loses the advantage of his height unless the ball is stood up, and then by that point, the threat of the cross has been reduced heavily with all of the pace removed.

At 25 years of age, Schick is no longer a young emerging talent, but instead, whilst not quite there just yet, he is closing in on the peak years of his career. Being critical of Leverkusen’s attacking output last season, they didn’t score enough. Though they had the third-best defence in the league, they only had the eighth-best attack and scored just one more than both Freiburg and Hoffenheim. For a realistic shot at a Champions League place, or even a title run, they need to perform better in front of goal. But, thus far they are doing exactly that. Leverkusen have scored 15 goals in their first five games, almost a third of the amount they scored in the league last season, and Schick already has four, only five off of his domestic tally from last season. If they are to improve upon their sixth-place finish last season Schick will need to continue this form.