The Bundesliga returned this weekend after what seemed like an eternity, and the pick of the games was at Signal Iduna Park, with Borussia Dortmund taking on fellow UEFA Champions League side Borussia Monchengladbach. Borussia Dortmund came into the game having had an interesting transfer window, adding the likes of Jude Bellingham and Thomas Meunier, while perhaps more importantly, keeping hold of Jadon Sancho (for now).

Gladbach on the other hand, have had a much quieter transfer window, with Valentino Lazaro and Hannes Wolf joining on loan. The game, therefore, could be judged under the same light as it would have been last season, with the tactics and formations used by the sides fairly predictable, particularly from Dortmund’s perspective.

In this tactical analysis, we will look over the tactics which allowed Borussia Dortmund to get the better of Gladbach over the 90 minutes, with a special focus on how Gladbach’s early pressing interacted with Dortmund’s build-up, and how Dortmund were ultimately able to take control of the game.

As mentioned, Dortmund’s starting lineup and formation was fairly predictable before the game, with their 3-4-3 expected to be seen. New signing Jude Bellingham started in the midfield along with Axel Witsel, while 17-year-old Gio Reyna starting in the forward line. Borussia Monchengladbach, showcasing their flexibility, opted to match up against Dortmund in a 3-4-3 also. Hindered by some fitness issues, Gladbach’s front three consisted of Jonas Hofmann, Lars Stindl and new signing Hannes Wolf. 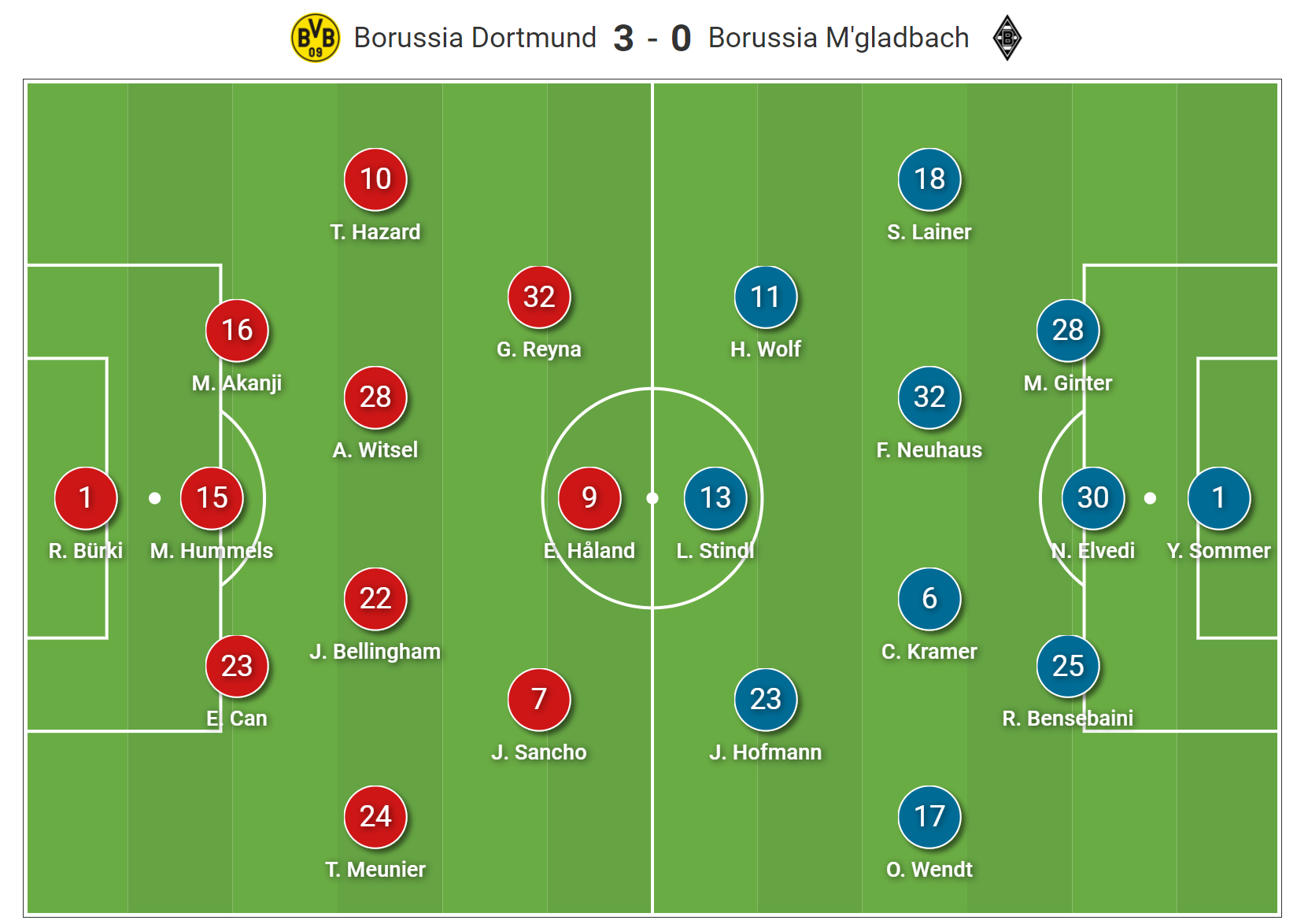 Gladbach’s decision to match up against Dortmund and mirror their 3-4-3 was most probably taken in order to hinder Dortmund’s build-up play, and for the most part in the game, Gladbach were successful in doing this.

We can see the dynamics involved in Gladbach’s press below, with this scene a typical one where Gladbach would press high. The Gladbach forwards could press Dortmund’s back line in a 3v3, with the inside forwards pressing the wide centre-backs. These players would press with the aim of preventing central progression, and so they would monitor the space vertically behind them or on the inside and look to cut this space using their cover shadows. 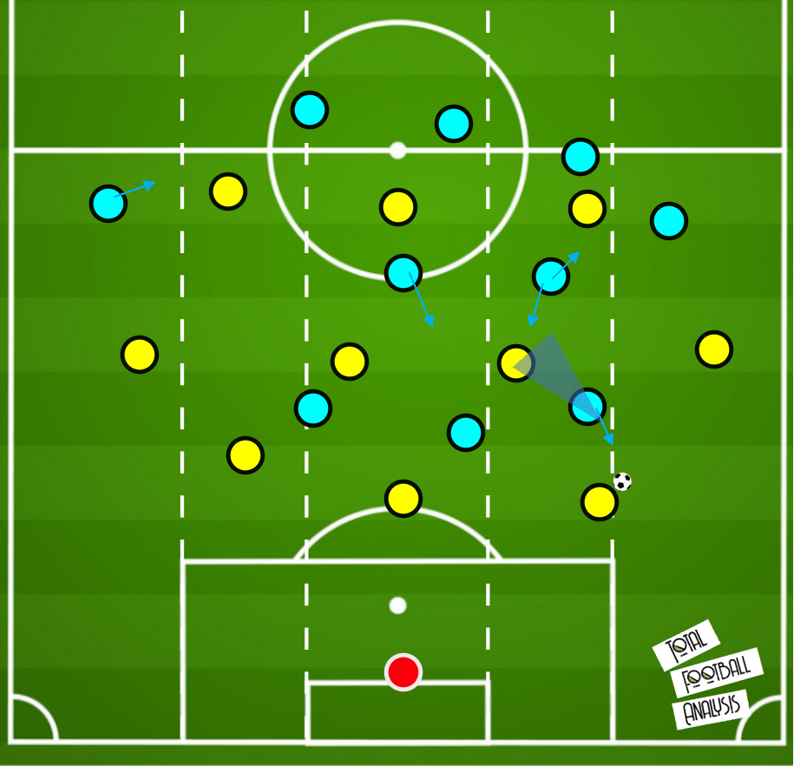 It was passes into this area seen above that tended to trigger the press, as when the ball was in central areas Gladbach could be slightly more passive and remain secure. We can see the central striker doesn’t pressure the centre back intensely and instead helps to protect the central lane along with the midfielders. Once the ball went wide the scene shown above could occur. 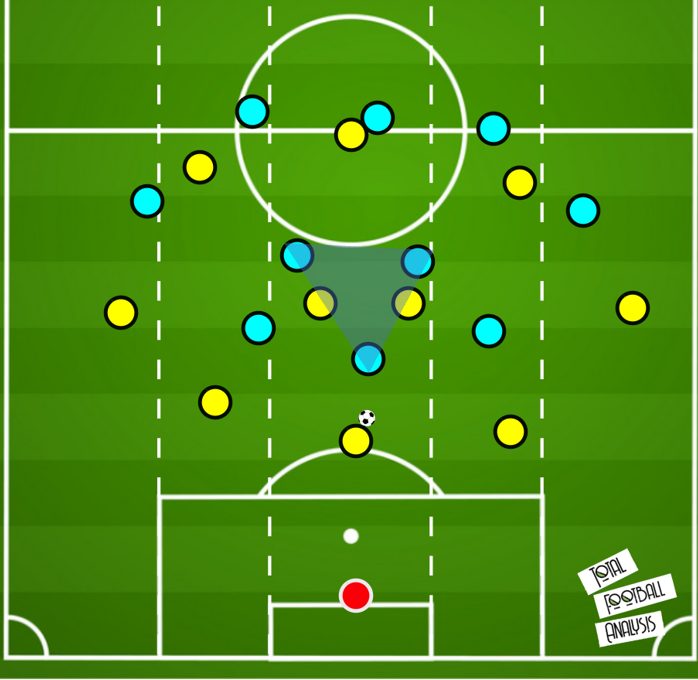 We can see an example below here where Gladbach’s press is triggered from a pass to the wide centre-back. Hofmann comes across and first checks his shoulder for the Dortmund inside forward operating in the half-space. As most wingers do, he looks to get into a position to initially cut this pass. He also continues his scan and looks for the positioning of Bellingham, Dortmund’s ball near central midfielder.

Hofmann presses the wide centre-back while cutting the lane to the ball near central midfielder. As a result, Christoph Kramer here can initially stay slightly further back and protect the half-space. The ball is played into the wing-back where Gladbach’s left wing-back (Wendt) can press, and Kramer can now push higher to press Bellingham should he receive the ball. Hofmann can also back press to apply some pressure to Bellingham.

We can see another example early on here where Gladbach’s press forces Dortmund backwards and allows their midfield to remain balanced. Hofmann again applies pressure to the wide centre-back while cutting the lane into the ball near central midfielder. This allows Kramer behind him to stay in a deeper position and monitor Sancho, whereas otherwise Dortmund may have had the opportunity to force Kramer to press high or allow a free player.

We can see in this example Gladbach are forced to adjust, with Bellingham dropping into the back line while Reyna moves deeper. With Dortmund temporarily in a back four, the Gladbach wing-back moves high to press Bellingham. The new ball near central midfielder, Reyna, is then temporarily open, and so Florian Neuhaus has to get across to cut the lane into him. The wide player is now covered by a wide centre-back, and so Gladbach are stretched but are able to recover possession and counter.

In the early exchanges Gladbach’s pressing nullified Dortmund, but as the game went on Dortmund started to find new ways to break that Gladbach press. The key part of this was their utilisation of a fairly fluid 3-4-3, which would often become a 3-4-1-2 in order to overload the Gladbach central midfielders.

One of the Borussia Dortmund inside forwards would often drop into more of a number ten role in order to create a 3v2 overload in central midfield, or a 2v1 overload on the ball near Gladbach central midfielder. We can see an example below where Bellingham has moved slightly wider and Reyna has dropped deeper into a central position. Kramer is overloaded and cannot cover both players. He initially covers Bellingham but then jumps to press the dropping Reyna, who can then flick the ball into the free player in Bellingham. Gladbach’s back three could manage this at times, but in higher areas vertical compactness became an issue.

We can see an example here where Dortmund are able to work the ball into the central midfielders, with Gladbach initially in a fairly stable 2v2 in this area.

Gladbach can’t get tight to the Dortmund midfielders quickly enough though, and so Witsel is able to open his body up. With the midfielders pressed tightly against their midfield counterparts, a passing lane in the centre opens up for one of the Dortmund forward line to drop into, and Jadon Sancho drops and can receive under little pressure from the centre-backs, as the Gladbach defence perhaps feels the ball is too high up for them all to get too tight and risk a ball over the top.

Here in the second half Dortmund are able to create the overload again, with Reyna dropping on one side of Neuhaus while Witsel is on the other. this means that for Dortmund if they execute the passes correctly, that one player should always be able to be free, and here Neuahus commits to the highest Dortmund player. Dortmund get some luck as they do pass it into the marked player, but they quickly are able to access Witsel who can then spread play under little pressure.

Dortmund’s early use of dynamic space occupation also allowed them to play out a few times, with players passing and then moving into a position to receive again immediately. We can see a simple example here where Meunier uses Oscar Wendt’s momentum against him, as he plays a simple give and go with the nearby central midfielder. Meunier is able to receive behind Gladbach’s second line, but Ramy Bensebaini is on hand to prevent him going any further.

We can see an example here where Witsel starts from a deeper position before receiving in the space behind a Gladbach pressing midfielder. Sancho drops very deep to draw a press, and he is able to find the unmarked Witself who can then progress the ball forward.

One final nice example we can see below comes from Jude Bellingham dropping as part of the back line again. Dortmund trigger the press by playing the ball to left centre-back Manuel Akanji, who dribbles with the ball to help engage the press before playing it back to Hummels. With the Gladbach right inside forward having pressed, Bellingham, who is now acting as a left centre-back of sorts, is free to receive and drive forward.

Gladbach struggled throughout the game to create many meaningful chances, with Jonas Hofmann’s chance in the first half the best of the bunch. In possession Gladbach set up in a similar way to Dortmund, with a 3-4-3 becoming more of a 3-2-5 at times. The wing-back would look to provide width to allow an inside forward access in the half-space, while Lars Stindl would take up one of his favoured roles as more of a false nine or overloading player. We can see this general structure below with wide centre back Matthias Ginter on the ball in a wide area.

We can see some examples here of Gladbach creating their own overloads in midfield using Stindl, with the German here dropping just behind one of the Dortmund midfielders while he is also occupied from the front. Gladbach’s inside forwards stayed higher and allowed Stindl to perform this role, with their aim largely being to pin Dortmund’s defence deeper and allow Stindl more space in these areas.

We can see another example here where Stindl is able to get free due to both Dortmund central midfielders being occupied. The Dortmund centre-back pushes out to press here, which affords space in behind for Wolf. Part of the problem for Gladbach though was that they did not possess their usual threat in behind, with Embolo, Thuram, and Pléa all missing from the starting lineup.

Scenes like the one below also didn’t help Gladbach to progress play, with Kramer here struggling to get across to help ball circulation following a switch in play across the back line.

As I’ve said Gladbach struggled to create chances and consistently progress the ball, and so when 2-0 down they switched to a 4-2-3-1, a system which committed more players forward. The presumed aim in this was to help create more overloads in the pitch, with Thuram here dropping in as a ten and creating a 3v2 against the Dortmund central midfielders, which leads to Neuhaus spreading the ball wider.

This formation had little time to make an impact and wasn’t helped by Gladbach conceding from their own corner not long after the tactical switch. In terms of defending that midfield overload, the tactical switch had little effect as Gladbach still had those two central midfielders. We can see an example below where Kramer is able to balance out the overload and gamble to win the ball and allow Gladbach to counter. The switch to a back four did mean they had less coverage on the back line and less license to step out and press, but this had a minimal effect in the game.

Dortmund came out deserved winners in the game, but the scoreline of 3-0 didn’t really reflect the tactical nature of the game. Dortmund managed Gladbach well and limited their number of chances, and also had some good moments in the build-up, but as seen in this analysis, Gladbach were also impressive in their pressing for the most part and stupid errors let them down. Dortmund recorded 1.45 xG to Gladbach’s 0.9, and had Gladbach not needlessly given away a penalty the xG value would be lower. Dortmund, of course, deserve credit though as they forced these mistakes from Gladbach and deservedly continued their good run of form. It will be interesting to see how much of a title challenge they can mount this season against the formidable Bayern Munich.