In the 21st match week of the Allsvenskan, Norrköping hosted Malmö FF in a very exciting clash between the table toppers and the current 4th place holders. Norrkoping after starting the season with a bang and topping the table lost their edge and are currently 8 points behind their opponents.

Malmö, in an exactly opposite way, started slowly before gaining momentum after the 6th game week and is currently leading the league with a 7 point lead over Hacken (who have a game in hand). This is a matchup between 2 of the best attacks in the league and this tactical analysis, we will be looking at the tactics deployed by both the teams. Let’s begin the analysis.

Norrköping lined up in a 4-1-4-1 formation which has been their regular in this season. They made only change to their lineup that won 2-0 against Kalmar last week which is bringing Pontus Almqvist for Christoffer Nyman in the centre-forward position. 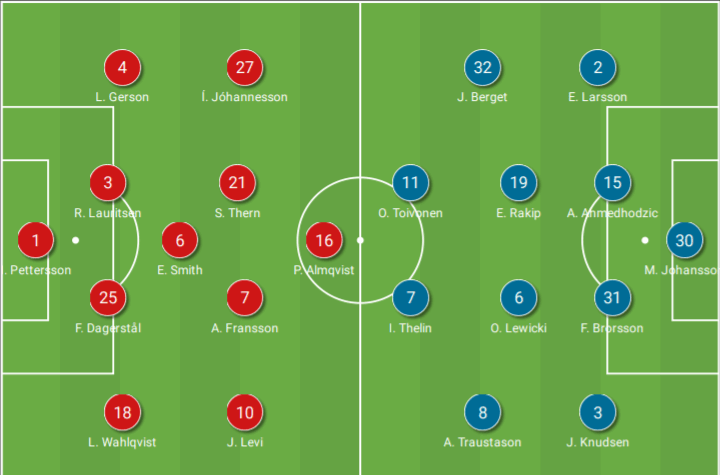 Malmö after playing a Europa league qualifying, which they won 2-0,  just 48 hours before decided to give some players a rest and changed their system from a 3-4-3 to their usual 4-4-2 that looks like a 4-2-3-1 on the pitch. Totally 4 changes were made with I. Thelin, A.Traustason, Knudsen and the goalscorer Franz Brorsson coming into the lineup.

Norrköping in their usual way tried to play out from the back against the Malmö press. Initially, they went out to play from the back asking their centre-backs to split and dropping one their defensive midfielder. But with Ola Toivonen marking the CDM like in the example below they had to drop another one of their advanced central midfielders to form a pivot and to effectively facilitate the play. 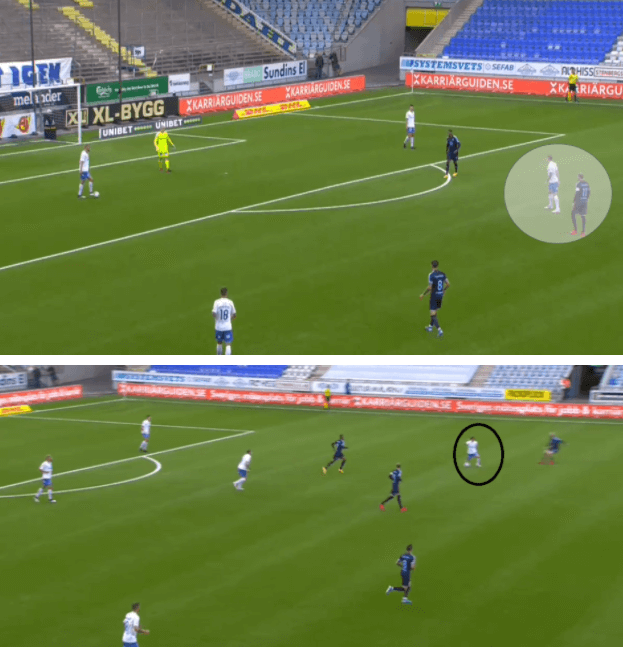 This helped them to progress the ball in the initial phase to the middle third. Malmö then decided to commit their players forward and went man-man to stop Norrköping from progressing the ball but Norrköping countered that with a slight change to their structural build-up by building in a 3-4-1-2 formation. Here they asked Smith to drop into the 3rd centre-back role and one of the advanced midfielders (There for the most of the game) into that CDM role of Smith to create a 3-1 box around the 2 centre forwards to outnumber them in this phase like in the image below. 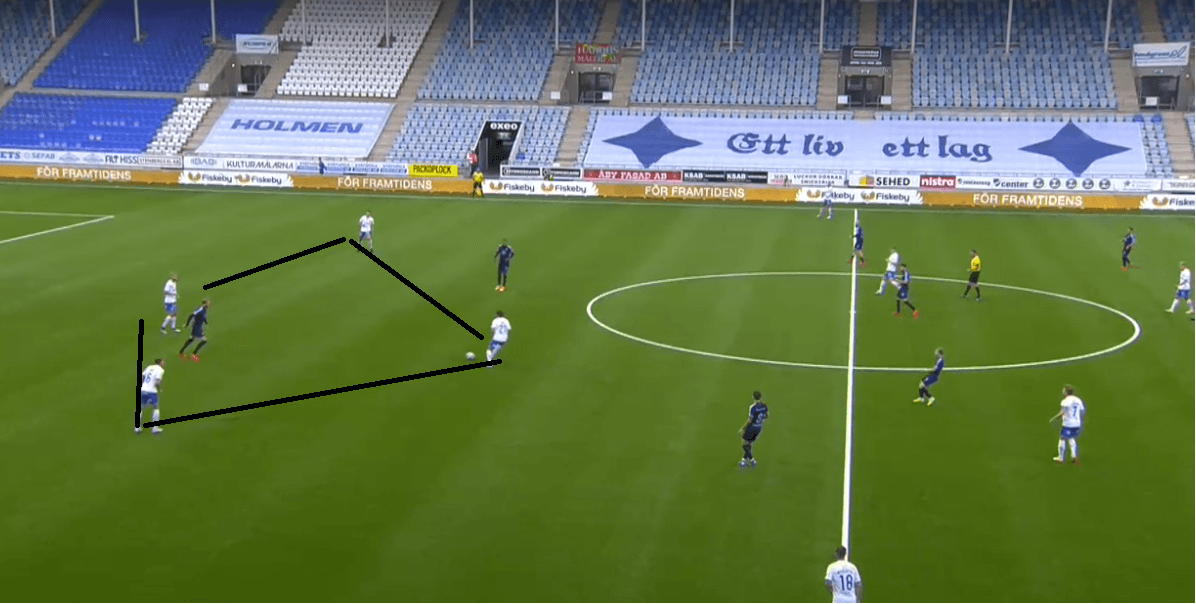 This gave the license for the full-backs to push higher and effectively act as wing-backs, like how Trent Alexander-Arnold and Andrew Robertson act at Liverpool, when Norrköping had the ball. Jonathan Levi joined Almqvist in the forward line with Johannesson and Fransson occupying the half-space and the full-backs providing the width. This system is similar to what Manchester United used after the restart. Their proper 3-4-1-2 shape is given in the example below.

Mostly the Norrköping would try to attack by playing balls to their forwards making runs in behind the defence through long balls from the centre-back or the full-backs. One of the examples is given in the image above. 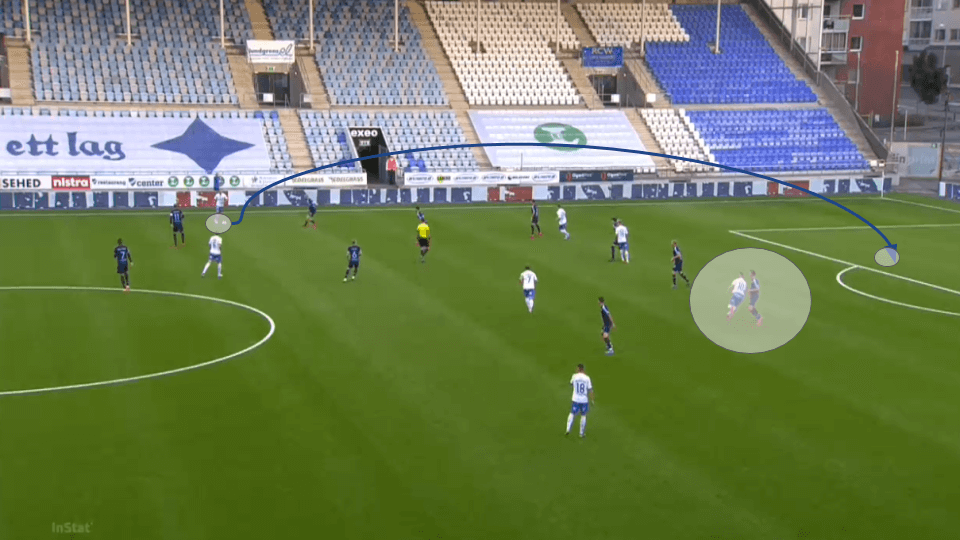 But for most parts of the game, Malmö’s defence was able to thwart these dangers and was able to defend well. They later shifted their build-up structure to a 3-4-3 in the second half as Malmö sat deep after scoring their goal. The shape is given in the image below. 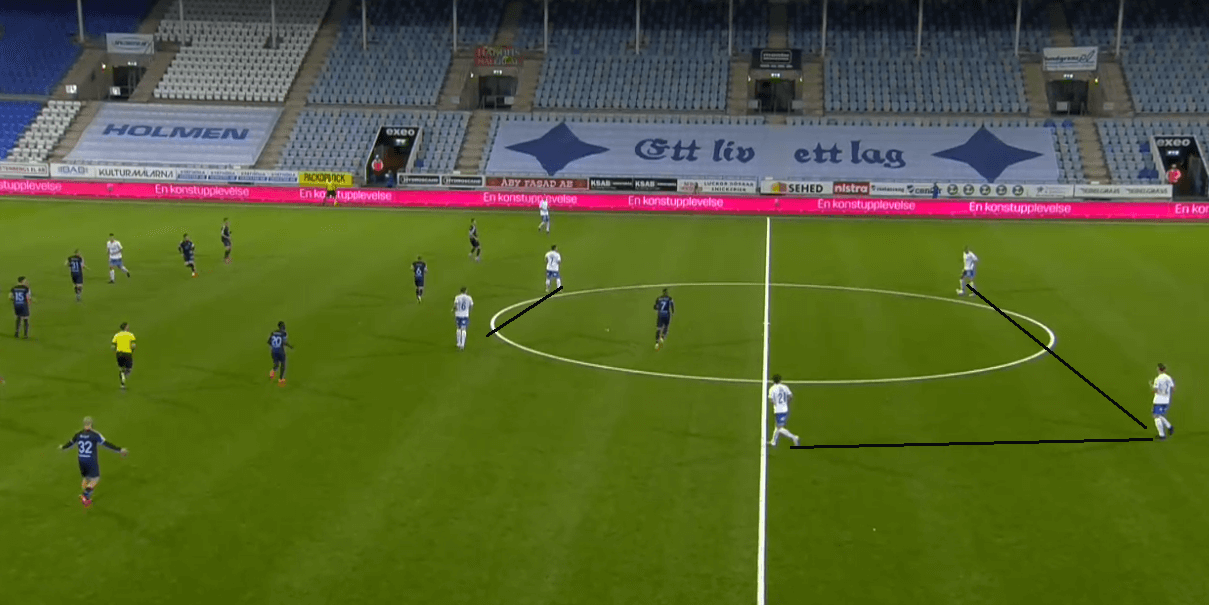 Malmö without the ball

Malmö went with a 4-2-3-1 system like said before. They pressed high but they did with less intensity as they mostly formed a mid-block to keep their defensive structure very compact without affording any space to the Norrköping’s players. Like said in the previous section Toivonen was tasked with the job of marking the Norrköping central midfielder to stop them from playing out from the back.

The wide midfielders tucked inside to make it very compact for them and similar to how Diego Simeone sets up his Atletico Madrid side. The main idea behind such a system is to compactly defend the central spaces with a zonal structure and move to the respective ball carriers and press them when they enter the zone. Though Norrköping were able to pass the ball into the middle third using their 3-1 structure, they often struggled to string good passes into the final third due to the compact defending by Malmö.

The league leaders went with a 4-2-2-2 system without the ball. This was facilitated by moving the wide midfielders very narrow to open spaces for their full-backs to push higher up the pitch. In the example below, we can see that Brauget and Traustason have tucked inside and have occupied spaces in between the lines (black circles). The full-backs are also higher as they are asked to provide the width when going forward (red circles). 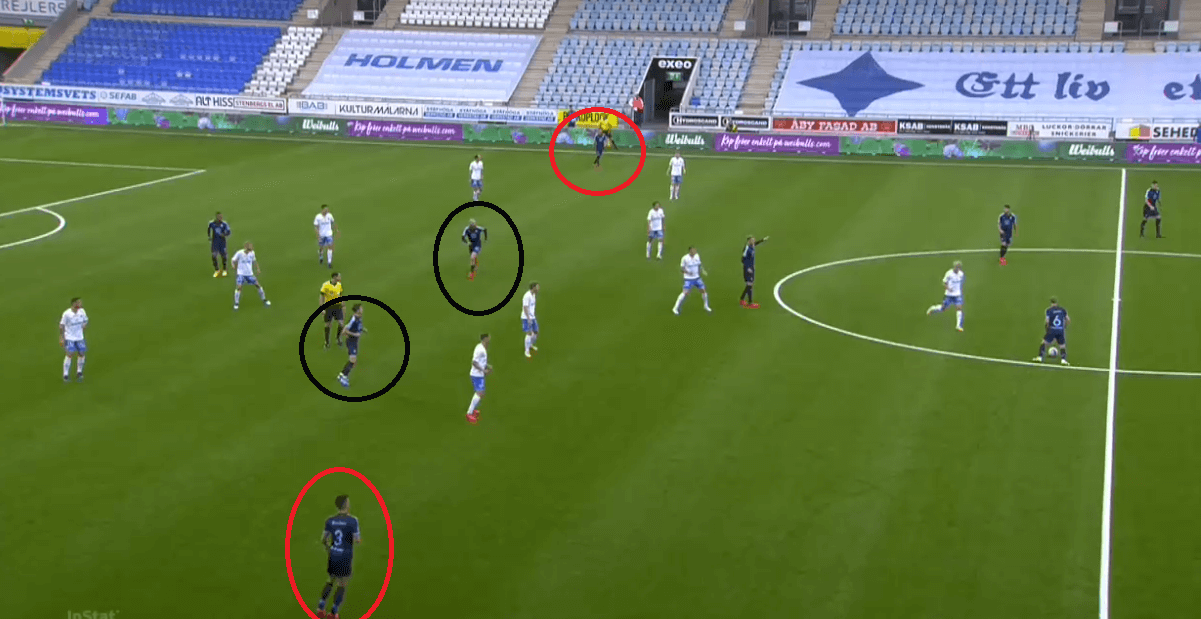 Oscar Lewicki would always drop into the left-back position to enable the actual left-back Jonas Knudsen to push forward and see that Malmö doesn’t get caught out during counter-attacks by providing them with the necessary in the flanks. 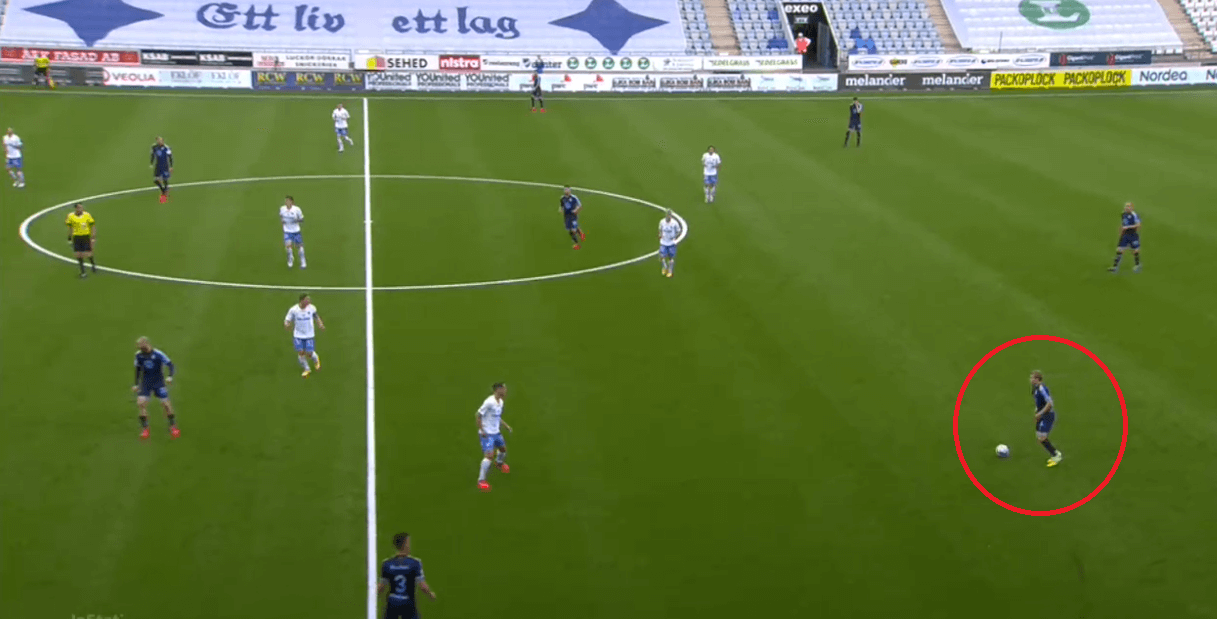 This effectively shifted to a 3-4-3 with Toivonen joining the midfield along with Rakip as they looked to spread the pitch wide with their centre-backs and use the half-spaces to overload and progress the ball.

Malmö also tried to overload the left-flank by playing their full-back and the central midfielder to occupy the wing space. This created confusion for the Norrkoping players as to whom to press. In the example below, Fransson is in a dilemma as to whom to press as either he has to press the left-back or the number 6 who has moved wide. This way Malmö easily bypassed the press of the Norrkoping and built their way. 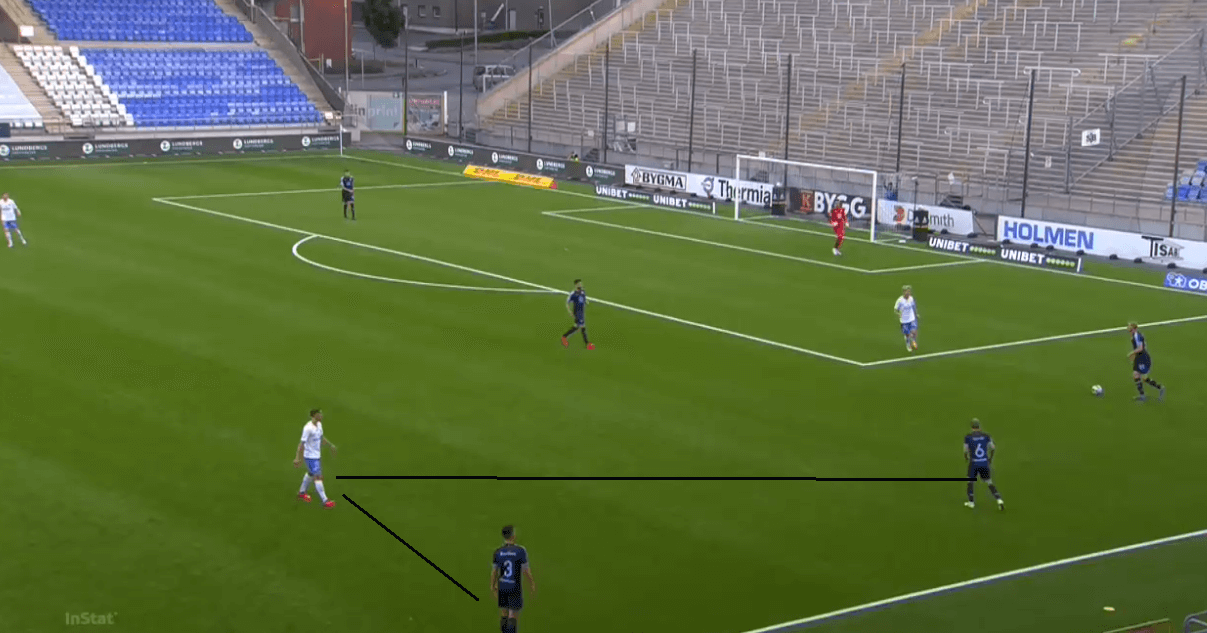 Toivonen also swapped positions with Rakip frequently by dropping deeper as the Malmö captain tried to get involved in the play as much as possible. In the image below we can see him swapping positions with Malmö’s number 19 as he is much better of a progressor of the ball than Rakip.

His passing range is visible here as he plays a beautiful long ball that bypasses the midfield line of Norrkoping and reaches the centre-forward. 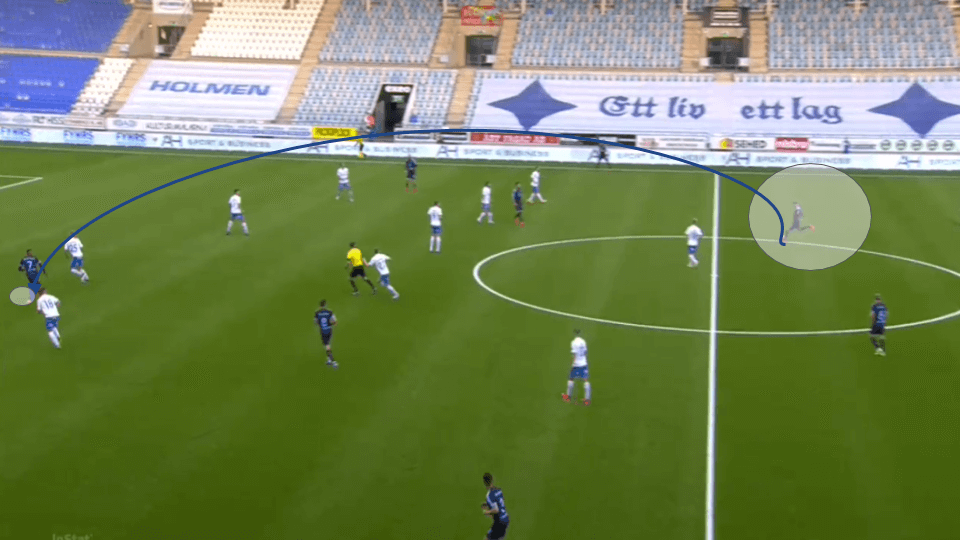 Norrkoping without the ball

Norrkoping looked to press high with a much better intensity than Malmö as they had a PPDA of 14 against that of Malmö’s 19.9. This number significantly reduced in the second half from 20.4 to 9.4. Their 4-1-4-1 formation shifted to a 4-5-1 without possession like the one in the image below. 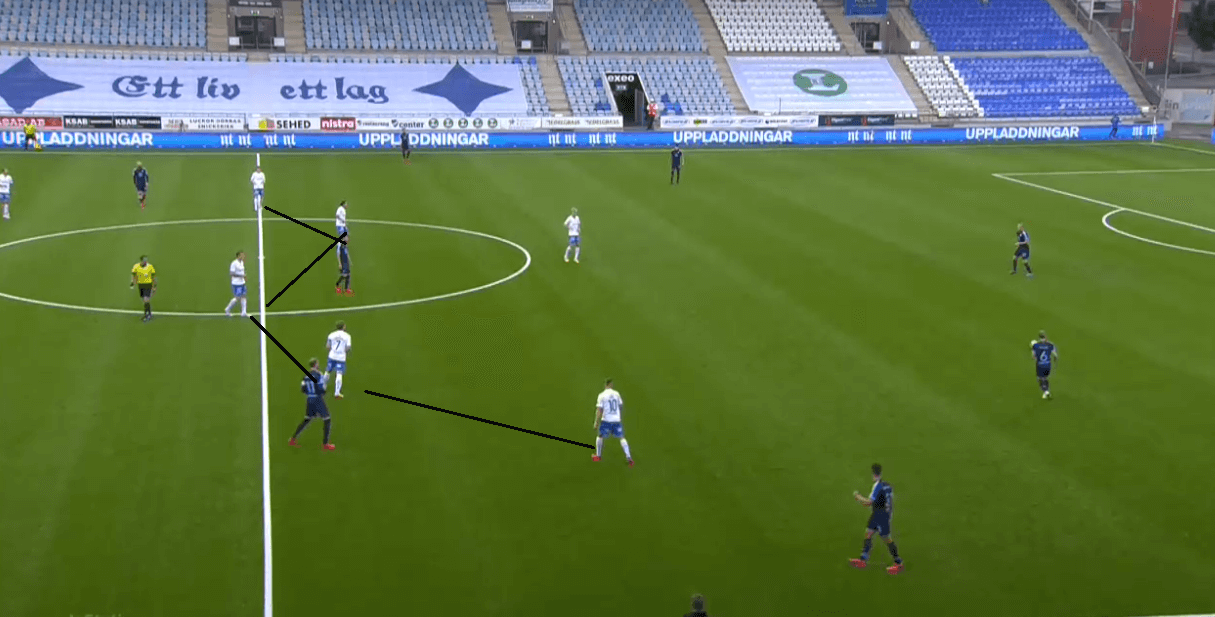 They deployed a pressing in such a way that they would press their nearest ball carrier when the ball reached him. The striker would stay central and the midfielder would press one of the 3 centre-backs formed during the Malmö buildup. 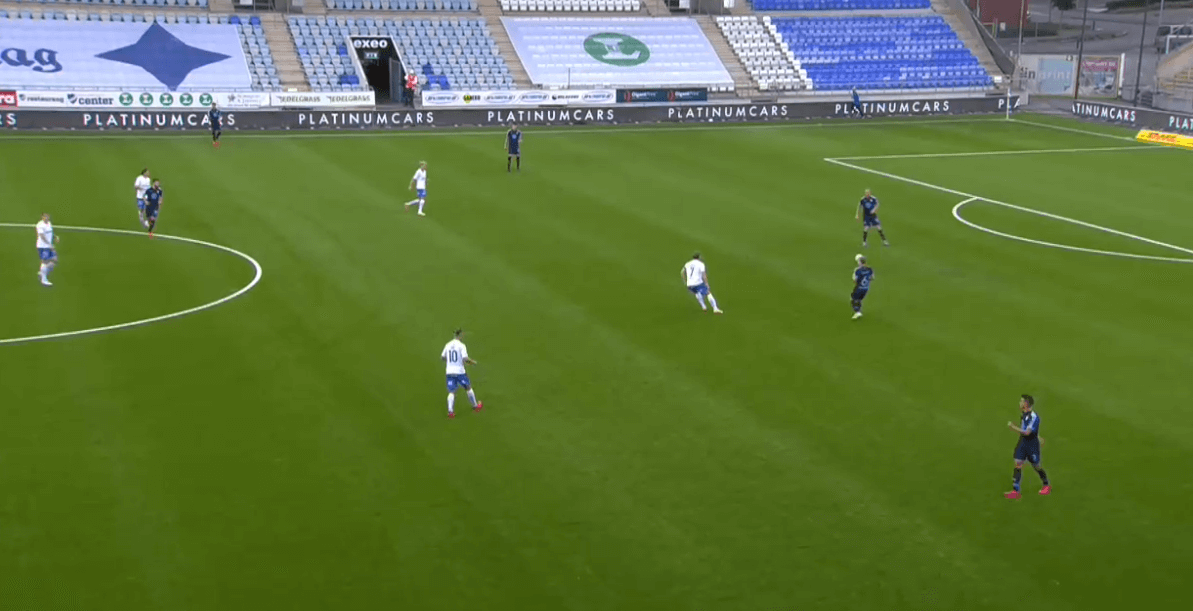 But the structure of this 4-5-1 was sometimes ineffective as the team didn’t press together. We mentioned before as to how frequently the Malmö wide midfielders tucked inside to find and occupy spaces, it was due to the fact that the defensive line didn’t join the front 2 lines. We can see Berget coming inside and occupying the space and also receiving a line-breaking pass from his teammate.

Both teams score through set-pieces

With neither team able to break the opposition’s defence as often through open play both settled for goals from the corner with Malmö scoring first around the fiftieth-minute mark and Norrköping finding a late equalizer to level the game. Malmö shifted to a 5-4-1 formation to defend their lead but a good corner strategy by Norrköping saw them find the back of the net. 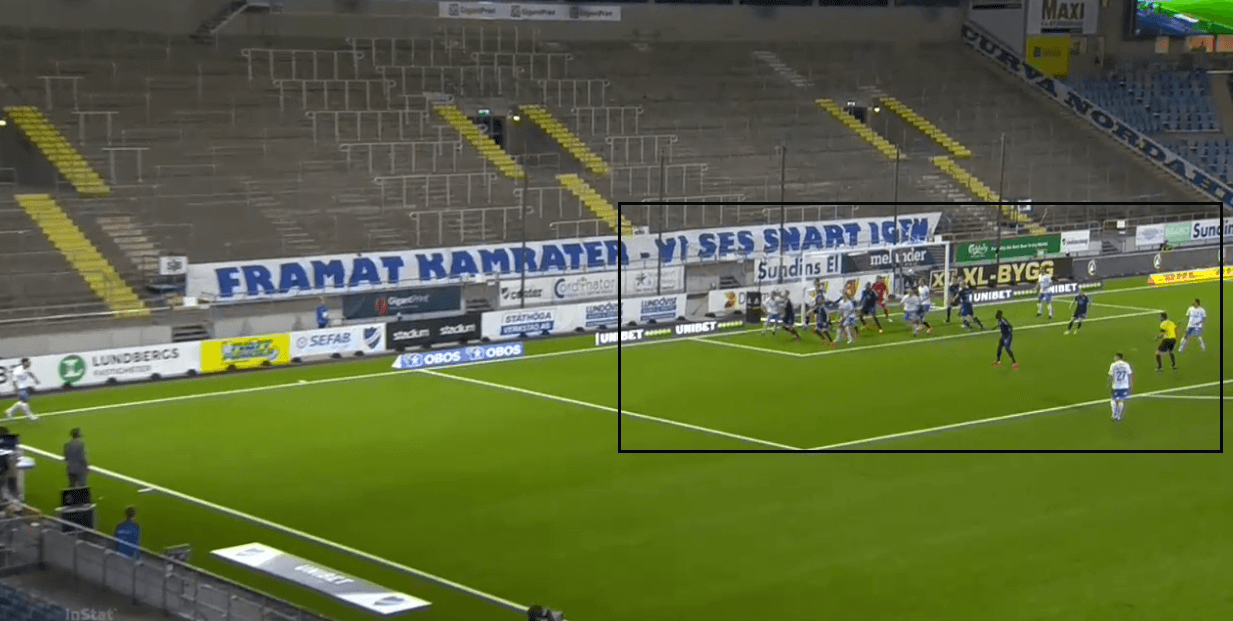 We can see that in the image above where Norrköping players have crowded the 6-yard area with just one player inside the box and not outside the 6-yard box. They especially crowded the near post (in the image below) and when the ball was delivered due to so many players competing for it it was deflected and it fell to Brorsson who scored a good goal. 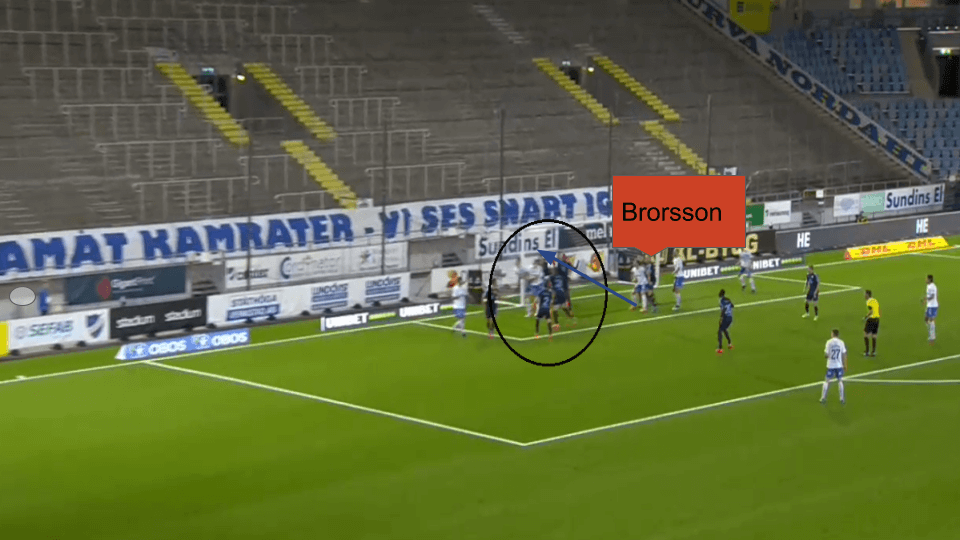 Eventually, both settled for a draw after the late equalizer in an evenly contested encounter. The draw still keeps them at the top of the table with 7 points ahead of second-place Hacken, though Hacken have 2 games in hand and a win both those games could take them within a point. On the other hand, Norrköping will stay at fourth but could drop to fifth if Djurgårdens manage to win their next match. 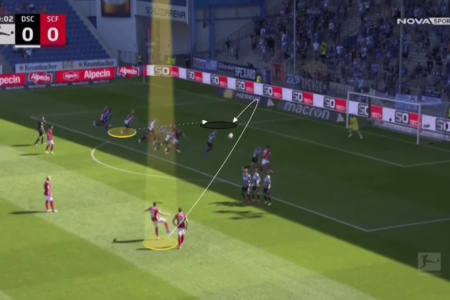 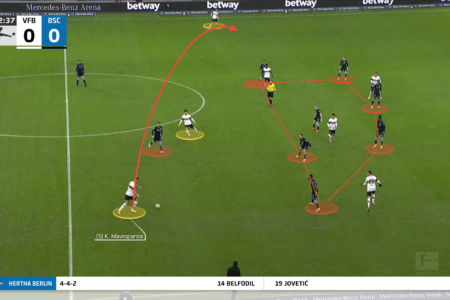 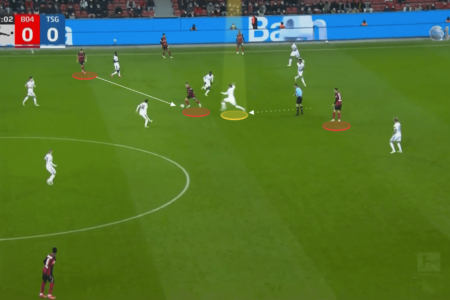