Tumultuous is a word that perfectly describes SC Paderborn and their fortunes as a side in the last six years. After promotion to the Bundesliga for the first time in 2014, they suffered an unceremonious fall from grace. In two successive seasons, they plummeted to the third tier of German football, 3. Liga. In their first season back in 3. Liga they finished 18th. Incredibly though, following back to back promotions, they find themselves once again in the Bundesliga.

Last season Paderborn finished second, in the 2. Bundesliga, winning automatic promotion at the expense of third-place Union Berlin, thanks to their superior goal difference. Only league winners FC Koln scored more than the Westphalian side.

Steffen Baumgart took over as manager of Paderborn back in 2017-18, his only previous managerial experience coming in the German fourth division. However, two successive promotions under Baumgart have led SC Paderborn back to the Bundesliga. This scout report and season preview will focus on the tactics that Baumgart favours, and how his new signings will fit into these tactics.

The concern for Baumgart is how many goals they conceded in the 2. Bundesliga last season. It’s telling that 14th-placed Erzgebirge had a better defence than Paderborn. Conceding fewer goals than last season, without heavy investment in defensive talent is going to be a difficult task, and Paderborn has had to try to bring in what they can on a shoestring budget.

Secondly, their star player from last year, Philipp Klement, has opted to stay in the 2. Bundesliga and sign with Stuttgart. Klement was the creative heartbeat of the side. Last year he scored 16 goals and provided seven assists from midfield last year.

They have also lost a key individual off the pitch as well. One of the reasons Paderborn has been able to move so swiftly back up the leagues is down to their remarkable scouting strategy. Due to financial constraints, Paderborn has had to sign players that other clubs might not necessarily be looking at, and pay as little as possible. In the last two seasons, Paderborn has only spent €787,356 on players. How have they been able to spend so little money and achieve such success? A lot of that would be down to Sporting Director Markus Krösche who in that time period has overseen Paderborn’s recruitment process. Unfortunately for Paderborn, Krösche has joined Red Bull Leipzig to take over the role of Sporting Director from Ralf Rangnick.

SC Paderborn isn’t blessed with the riches of their fellow league rivals and has taken a different approach to one of their fellow Bundesliga newcomers Union Berlin. Both clubs are cash-strapped, but Berlin has signed proven pros with Bundesliga experience, such as Neven Subotic.

Paderborn, on the other hand, has predominantly recruited from the lower leagues. And all without spending a penny. Streli Mamba, Cauly, Johannes Dörfler, and Marcel Hilßner have arrived on free transfers from third-tier sides Energie Cottbus, MSV Duisburg, KFC Uerdingen, and Hansa Rostock respectively. Despite playing at a much lower level they will be expected to contribute from the first game of the season.

The most likely to do so is Streli Mamba, a forward who was playing in the Regionalliga only two seasons ago. He scored 20 goals in 28 matches that season and scored 11 goals in 36 matches in the 3. Liga last season. Playing in the Bundesliga this year will be a huge step up for the striker, but he is fast, good with both feet, and very combative. He picked up 10 yellow cards last season. He is excellent when pressing from the front, however. Over his career so far he has successfully recovered the ball on 74.1% of his attempts in the opposition half.

Goalkeeper Jannik Huth has signed from FSV Mainz 05, and will start the season in goal for Paderborn. Last season’s number one, Leopold Zingerle, is still sidelined from a shoulder injury. Although Zingerle kept seven clean sheets last season, Paderborn was still conceding an average of 2.21 goals per game. With the number one shirt for the beginning of the season, it’s a good opportunity for Huth to cement a starting position.

Gerrit Holtmann, a 24-year-old left-winger, has also come in from FSV Mainz 05 on a loan deal. He is likely to play at left-back though, having featured there in pre-season so far. Holtmann is an excellent dribbler, last season completing 61% of his 5.63 dribbles per game. He made improvements defensively last season too, despite playing as a winger, winning 59% of his defensive duels and making 4.33 interceptions per game. Holtmann has experience playing as a left-back and this could be an interesting addition, particularly with Laurent Jans on the other flank at right-back.

Jans has joined on loan from French side Metz. Like Holtmann, Jans is an excellent dribbler. Over his career, Jans has completed 63.8% of his dribble attempts per game. Baumgart clearly wants his full-backs to be ball-carriers who can break the lines, and be an attacking threat. Defensively Jans is sturdy too, winning 61.1% of his defensive duels and making 5.94 interceptions per game.

Worryingly, both full-backs have only a 73% pass completion rate, which is a little low even by a full-back’s standard.

Luca Killian, a 19-year-old centre-back, has been brought in from Borussia Dortmund II. Killian has played regularly throughout pre-season and Baumgart may well use him as the season progresses, but he is likely seen as a player for the future rather than right now.

The most important transfer though was the signing of Rifet Kapić from Grasshoppers. The 24-year-old native of Bosnia and Herzegovina is the man expected to fill the hole in midfield left by the departure of Klement. He is good on the ball, last season completing 60.6% of his dribble attempts. Kapić is also aggressive in his passing. Last season he completed 74% of his passes into the final third, attempting 9.07 of these passes per game.

So far in his career he has averaged a goal every four games, and in 2018/19 scored a total of five goals and made five assists. This was whilst on loan at both Sarajevo of Bosnia and Herzegovina, and Sheriff Tiraspol, a Moldovan side. The difference in standard of both of these leagues to the German Bundesliga is gargantuan and it will be interesting to see how Kapić adapts.

Baumgart has predominantly fielded a 4-4-2 throughout his time at Paderborn. Generally speaking, he likes to play with a “double 6”; the two central midfielders sitting deeper. The formation is often seen as a 4-2-2-2. In his first full season in charge at Paderborn he also fielded a 4-1-3-2 in over a quarter of their games, but it’s unlikely he would field such an attacking formation in the Bundesliga. What we can surmise from his preferred formations is that he likes to play with two strikers. This may surprise fans of the premier league where the 4-4-2 has been seen as an outdated system for some time now.

However, it has had somewhat of a renaissance in the Bundesliga as of late. Last season it was the preferred formation of Nürnberg, Hannover, Freiburg, Fortuna, and RB Leipzig. FC Schalke and Werder Bremen have also been using it heavily in pre-season this summer.

Last season Paderborn had some very interesting tactics when counter-attacking. They have built their team around pace, and are able to turn defence into attack very quickly. Last season, 20.5% of their goals from open play came from either a counter-attack or a high press. 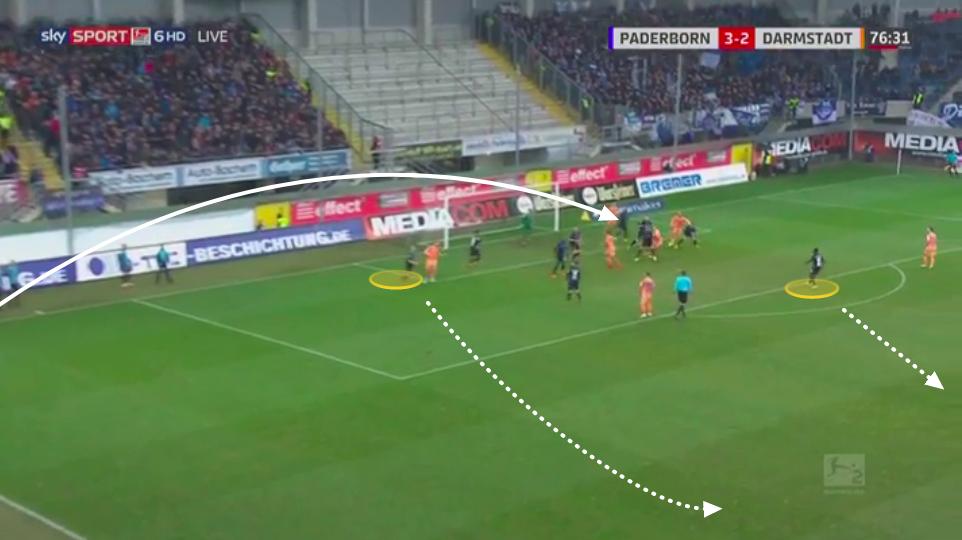 In the above analysis, we see that Paderborn’s two fast strikers, Sven Michel and Babacar Guèye are highlighted, whilst Paderborn are defending a corner. Both of them are marking areas, Michel the front of the six-yard box. Players are positioned here to head the ball away should it be of a low height. Guèye is on the edge of the area, and is there to retrieve the ball should his defence head it towards the edge of the 18-yard-box.

As soon as the ball clears Michel’s head, he makes a progressive run up the pitch at speed. He leaves the man he is supposed to be marking. 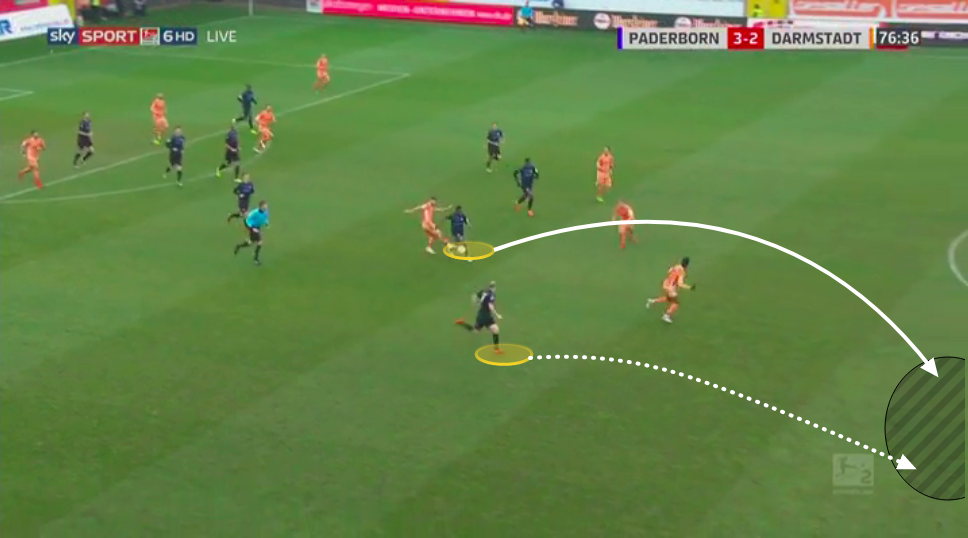 As the ball falls to Guèye, Paderborn are able to break at speed. Michel is soon the furthest player forward on the pitch, without being tracked, and scores.

As mentioned above, Paderborn has a number of players who are particularly quick. Sven Michel is the most obvious example of this. Michel plays on the shoulder of the opposition defence the entire game, looking for balls in behind. 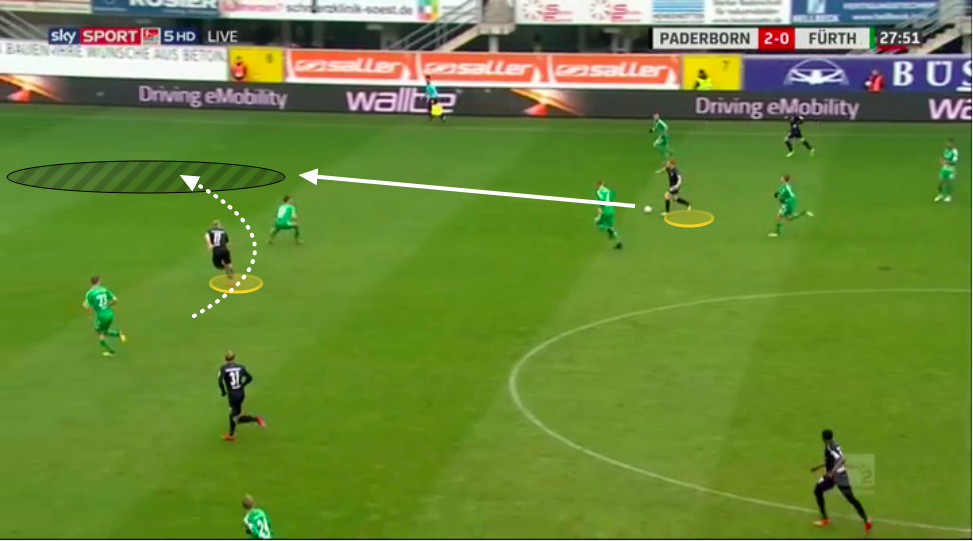 Paderborn will continue to use this option next season. By not over-playing in midfield they have less chance of losing possession to better teams in dangerous areas where they might be susceptible to a break. Michel’s pace allows them to break quickly and catch the defence cold, or create time for extra attacking players to arrive.

Baumgart favours a press and the role of his two forwards and two wingers is very important in this. When the opposition has the ball at the back, Paderborn are organised in their 4-2-2-2 formation. Both forwards sit around halfway inside the opposition half. The two wingers are also very high, ready to press the full-backs. We can see this in the tactical analysis below.

Paderborn want to engage their opponents as early as possible in order to win the ball back as high up the pitch as possible.

It is something that has been a constant under Baumgart and they have continued to be a pressing side through pre-season. It will no doubt be a cornerstone of their defensive tactics in the Bundesliga.

Paderborn often press with the two forwards taking narrow positions. They tend to sit slightly inside the positioning of the opposition teams centre-backs. 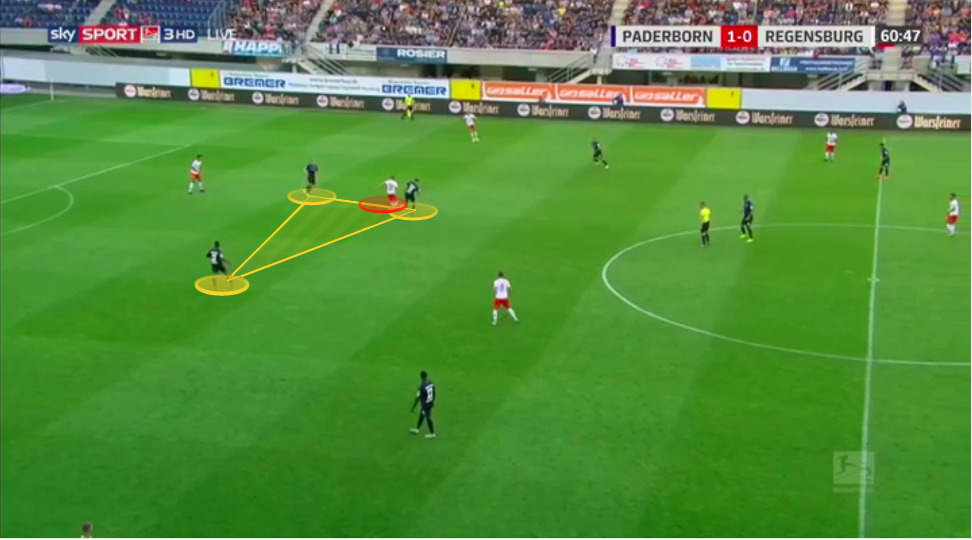 They have an easy passage through to goal if the ball is won back in a central position. 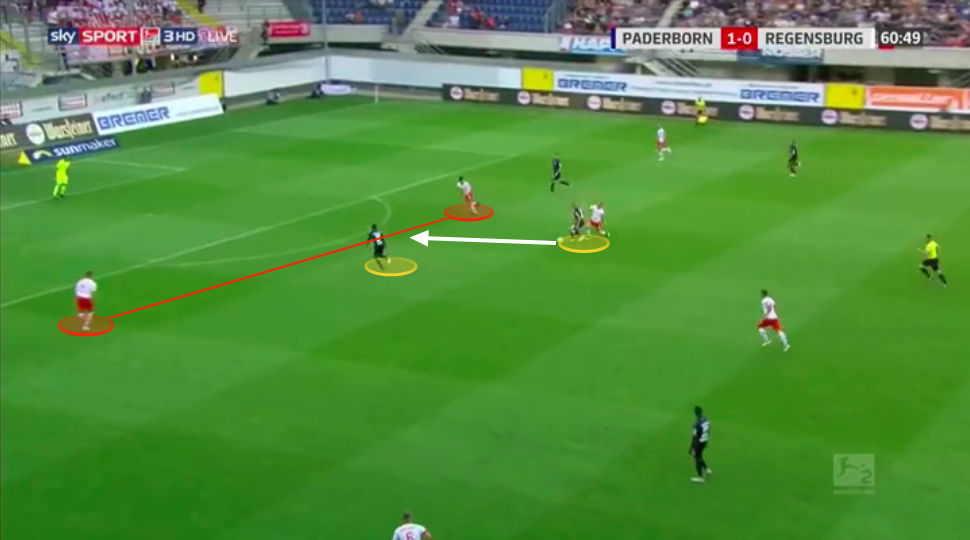 One of the favourites to go down this season will be Paderborn. They don’t have the financial muscle that other teams in the top flight enjoy, and they have little in the way of proven Bundesliga talent in their squad.

However, Baumgart is a coach that has worked miracles so far with what the players at his disposal and Paderborn have uncovered several hidden gems through their recruitment efforts in recent years.

The Bundesliga is a notoriously difficult league to survive in after promotion, without heavy investment. Out of the four teams promoted in the last two seasons, Fortuna Düsseldorf are the only team to still be in the Bundesliga. It will be a very difficult task for Paderborn to stay up, however, Baumgart will believe their pacy counter-attacks, and intense pressing might give them enough chances to do so.