Inter made their best signing this summer when they appointed Antonio Conte as their new coach. Unsurprisingly, Conte’s influence has been immense and Inter have looked excellent so far in Serie A. Inter also made two superb signings to their midfield department when two of Italy’s most interesting midfielders joined the club: Nicolò Barella and Stefano Sensi. Together with Conte’s tactics, the duo has revolutionised Inter’s midfield. This tactical analysis scout report looks at the importance Inter’s midfield holds for Conte’s tactics to work, both in an attacking and defensive sense.

Inter have a very good squad, and the strength of their midfield department is no different. In Conte’s 3-5-2, the three central midfielders usually line up with one holder and two more advanced midfielders. Firstly, Marcelo Brozović is the undeniable first-choice as the holding midfielder and probably the first name on Conte’s team sheet. He was integral for Inter during Luciano Spalletti’s reign too, and nothing has changed under Conte. However, Inter lack a good back-up to the Croatian and this might worry Conte if Brozović would get injured.

In front of the Croatian, Barella and Sensi have largely been preferred up until Sensi’s injury. The performances of both have been extremely encouraging and both have contributed goals and assists, particularly Sensi, who was unreal in the opening weeks of the season. Additionally, Conte can call upon the likes of Roberto Gagliardini, Matías Vecino and Borja Valero. These options provide Conte with a good mix of qualities and profiles to use in his team. Now, let’s look at the tactical importance of their interesting midfield.

As mentioned, Inter set up in a 3-5-2, which becomes a 5-3-2 out of possession. We can clearly see this defensive shape in the image below. 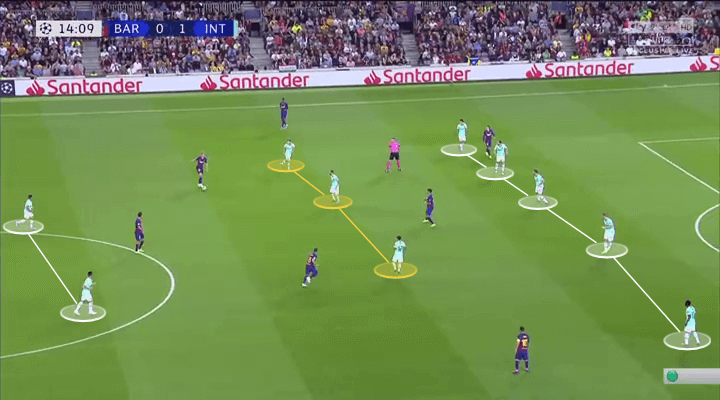 As per usual with Conte’s teams, Inter defend in a positionally-orientated manner. Therefore, the midfield three’s main job is to close spaces in front of the three centre-backs. To do so, they defend in a narrow manner and look to force the opponent wide. We can see this below as Borussia Dortmund look to progress the ball. Note the positioning of Inter’s midfield three, just in front of the three centre-backs. This positioning forces Dortmund to play the ball into the wide area where Inter will then look to overload around the ball. 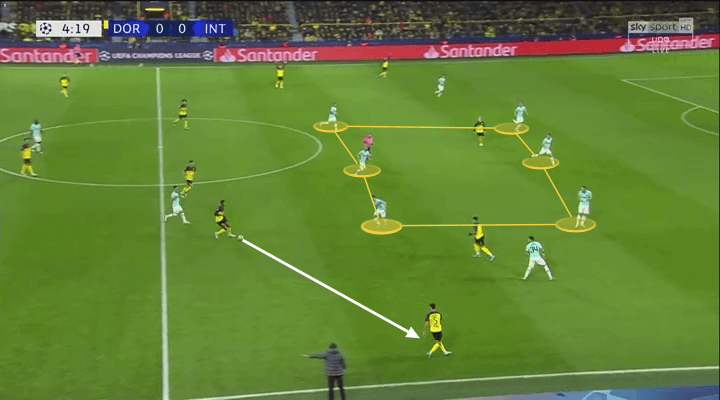 The image below highlights this positioning again. The three central midfielders cover the spaces directly in front of the centre-backs and try to force Barcelona to go wide. 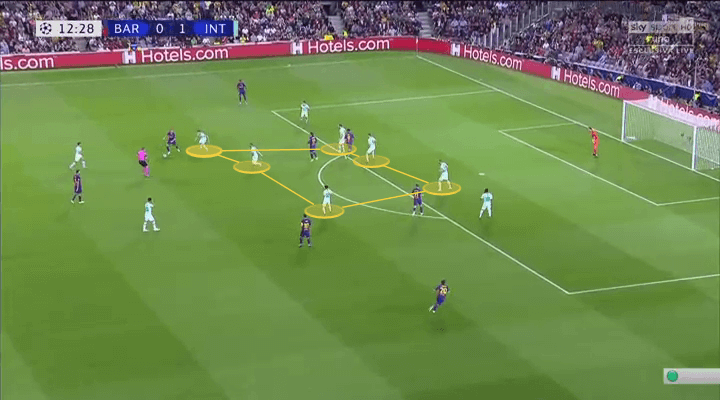 This is the main job that the midfield three performs when Inter are out of possession. However, as we’ll see below, they are also very involved when Inter look to press higher up the pitch.

The midfield’s role when pressing high

What might seem surprising given Inter’s overall positional orientation out of possession is that they actually press in a man-orientated manner very often. This approach has especially been evident at Dortmund and Barcelona in the Champions League. As we see in the image below, Inter’s forwards focus on either centre-back while the two more advanced central midfielders support this pressing action by marking Dortmund’s two deepest midfielders. Behind them, Brozović provides cover. 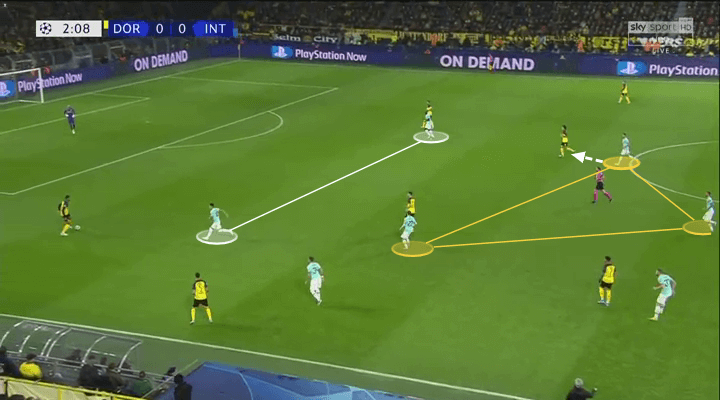 Interestingly, Inter adapted their midfield positioning to match Barcelona’s in the clash at Nou Camp. We can see this below as Sensi plays ahead of Brozović and Barella to man-mark Sergio Busquets. The other two are orientated towards Barcelona’s more advanced central midfielders in a bid to remove Barcelona’s central option for ball progression. 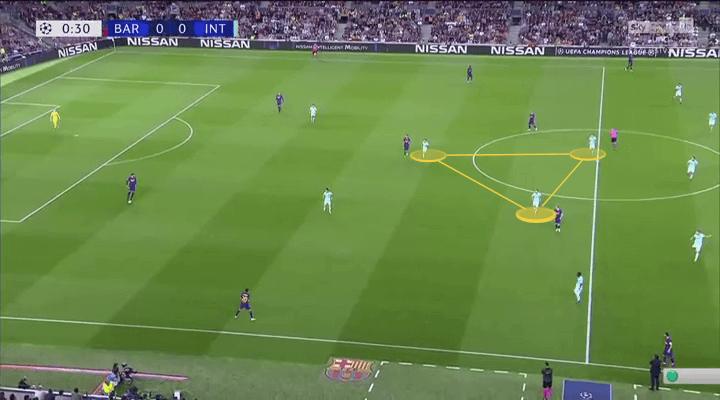 At Barcelona, Inter’s midfield three were very committed to pressing their Catalan counterparts and the image below highlights how far up the pitch they went to man-mark their direct opponents. 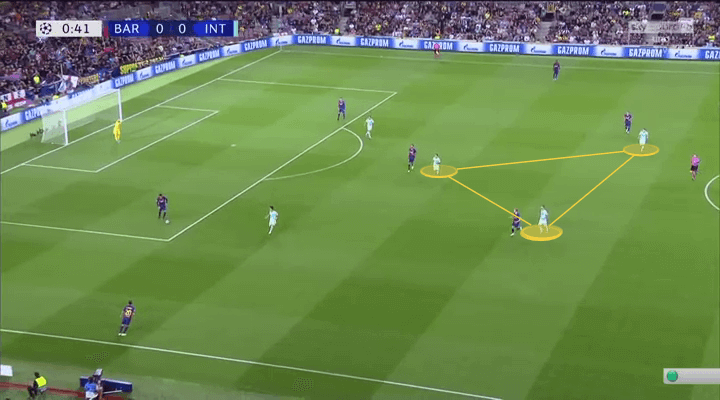 When outnumbered in their first pressing line, as below with Dortmund’s three creating a free man against Inter’s front-two, the ball-near central midfielder will step up to press the free man. On this occasion, this means that Barella steps forward to press the Dortmund player and thus leaves the midfield to perform this action. 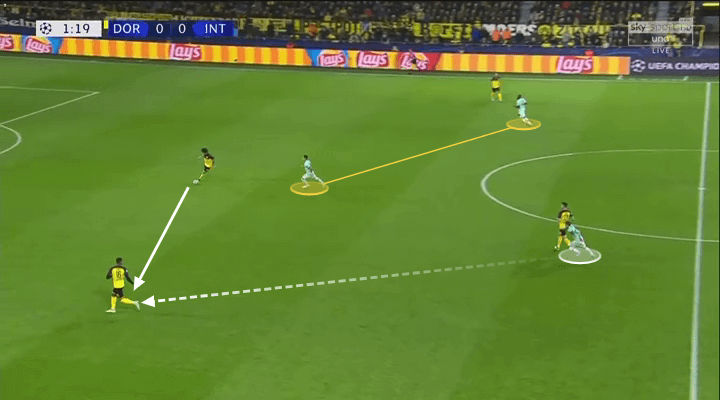 How the midfield contributes to Inter’s build-up play

While the Inter midfield’s responsibilities in the defensive phase are quite standard, what they do in attack is very interesting. Firstly, let’s take a look at Inter’s positional structure in possession (image below). The wing-backs (black) move high and wide while the two strikers stay close to each other. Brozović (white) positions himself behind the opponent’s first pressing line to provide a passing option that breaks the first line of the opponent. The other two midfielders (yellow) position themselves higher, and most often in either half-space. Crucially, they always position themselves wider than the strikers. Later, I’ll look at why this is the case. 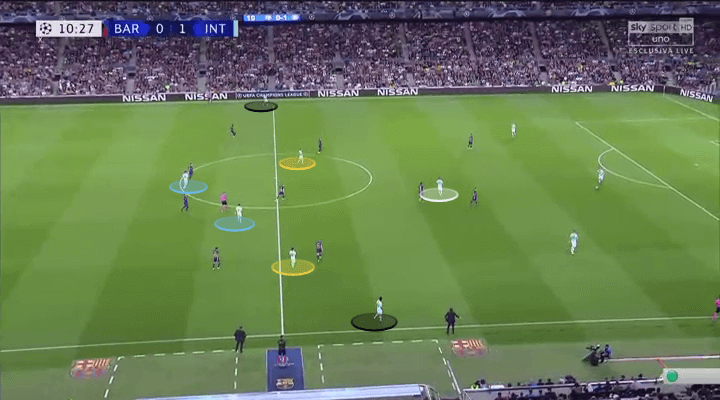 As mentioned, Brozović looks for a position in which he can receive the ball behind the first line of the opponent. This is likely done to break the opponent’s first line of defence as well as to attract pressure from the midfielders and thus open up space to play into behind the pressing player. Given Brozović’s calmness and press-resistance, he can often turn away from pressure and play clever passes round the corner into Sensi, Barella or even the strikers. In doing so, he allows Inter to progress the ball cleanly and, crucially, centrally. This then draws the opponent inside, opening up the wings which Conte wants to attack. The image below highlights the area Brozović often looks to receive the ball in. 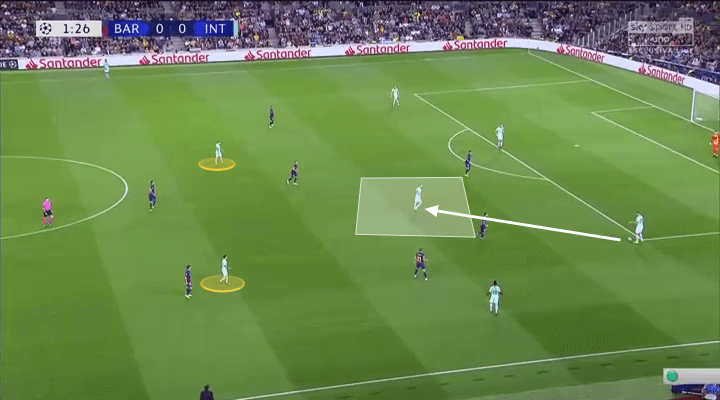 One of the trademark patterns of a Conte side is the use of the strikers in the build-up play. He is famous for encouraging rehearsed combination play between his strikers, but the midfielders also look to combine with the strikers according to pre-planned moves. In the image below, we can see one such example of the link-up between striker and midfielder. Here, the ball is played into Alexis Sánchez. Sensi (yellow) is already on the move to provide the Chilean with a passing option. A swift lay-off from Sánchez later and Sensi is facing forward with lots of space to attack. 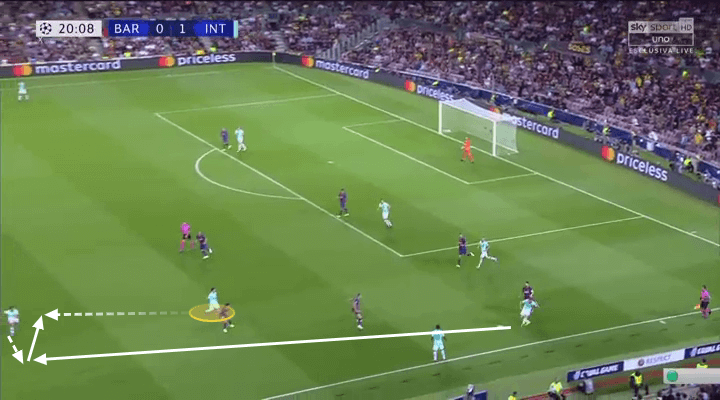 As you can see below, the combination has allowed Sensi to advance into space and progress the ball into Barella (yellow). With Inter now racing forward, they’ve opened up the entire pitch with the wide threat posed by Antonio Candreva while Lautaro Martínez threatens into depth. 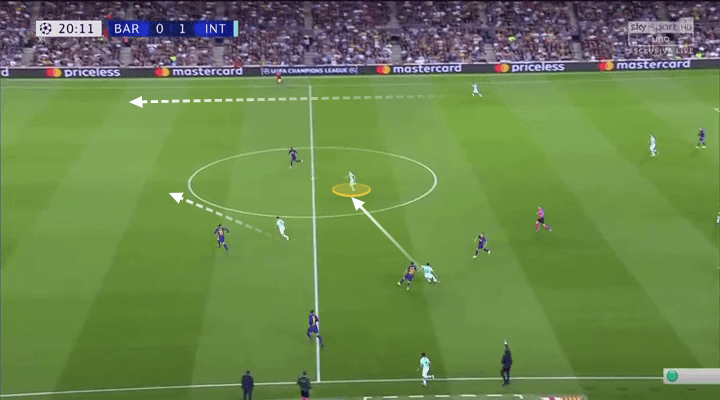 The understanding and combination play of midfielders and strikers can be seen in the way Inter often look to progress the ball from the back. The two wider central midfielders often drift wide to open up passing lanes from the defence directly into the strikers, from where the ball can then be returned to a forward-facing midfielder. We can see an example of this movement in the image below. Vecino (yellow) has drifted out wide while Romelu Lukaku (white) has dropped deep to provide a passing option. 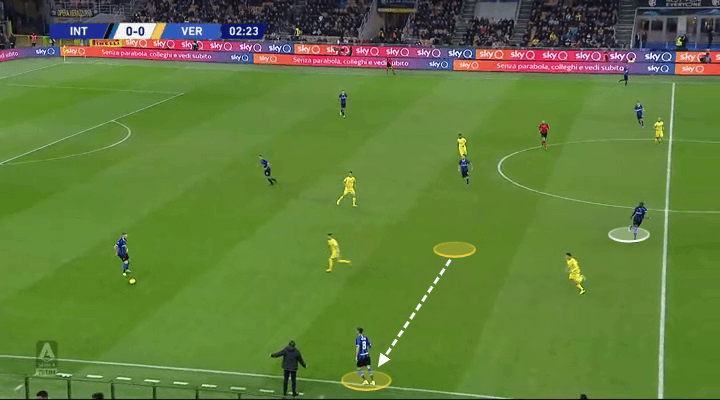 The image below is another example. As Stefan De Vrij steps forward with the ball, Vecino and Barella have drifted wide and dragged the Verona midfield apart. Their movements have opened up an easy passing lane from De Vrij to Martínez, who then lays the ball off to the forward-facing Brozović. 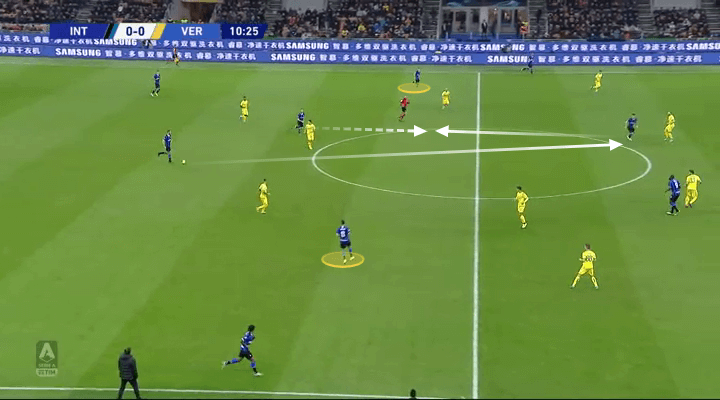 This is a very effective method to open up central passing lanes and Inter do it very well. It requires of the midfielders to have the understanding of when to make the movements and then when to come back inside to become a viable passing option. Therefore, this will likely improve with more time, but so far they seem to have grasped the idea well.

Finally, I’d like to look at another way the midfielders contribute to Inter’s attacking play. This regards deep runs from midfielders beyond the opponent’s defence. Barella, Vecino and Gagliardini are the three who do this best. In the image below, we can see how Sensi (black) has drifted wide and is supported by Sánchez. Realising this movement from the striker, Barella (yellow) makes a run in-behind Barcelona’s defence. 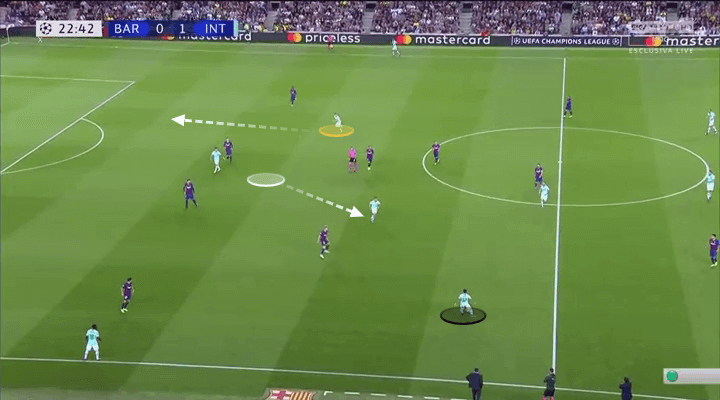 In the image below we have another situation of Barella looking to exploit space to run into depth. On this occasion, Brozović has just switched the ball out wide to Candreva. As the ball travels to the Italian, Barcelona’s left-back has left his position to press the wing-back. This has opened up a huge space for Barella (yellow) to sprint into. Candreva duly lays the ball into his compatriot’s path and Inter progress further up the pitch. 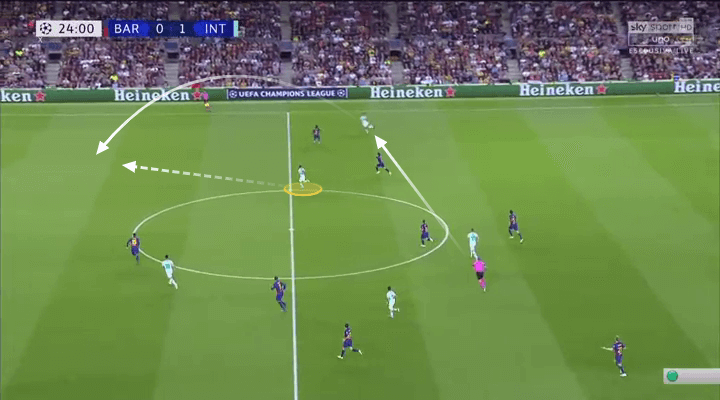 As this analysis has shown, Inter have some very interesting ideas in the way they build from the back. To succeed with these, the midfield is crucial. Additionally, the midfield plays a vital role in producing the defensive solidity that Conte craves in his team. With talented players such as Brozović, Sensi and Barella, Inter’s midfield is exciting and great to watch both in and out of possession. With more time together with their coach, Inter’s interesting midfield will probably improve even further.