The long line pass is probably one of the simplest passes in all of football and therefore is a common pattern to progress the ball further up the pitch in the wide-areas. However, this kind of pass has some advantages and disadvantages and this tactical theory piece will try and identify them.

Additionally, we will see in this analysis the reasons why Thomas Tuchel wants his players to avoid this kind of pass and how he simply takes the long line pass out of his training sessions. Also, I need to mention at this point that a speech of Tuchel back in 2012 (he was the head coach of the Bundesliga club Mainz 05) inspired me to write this tactical analysis but I will come back to that at a later stage of this piece focused on tactical theory and tactics.

Why it is used

Nowadays, commentators, fans, experts, and everyone else talk a lot about compactness when it comes to defending. Basically, this word is used to describe how little the distance is between the players and therefore how much space a team occupies. We can also split compactness in horizontal and vertical compactness to be more specific.

This was now a very short and simple explanation, but we need it to understand the basic idea behind the long line pass. If you want to know more about compactness, then read the two tactical theory analyses by Marko Jović on compactness which both got published this week.

Now, probably the question occurs what exactly compactness has to do with the long line pass, but that is quite easy to understand. Within the last years or probably decades, teams focus more and more on staying compact when they are out of possession. The vertical and horizontal compactness are both important. However, while the vertical compactness is a central factor when we talk about the space between the lines, many squads have as one of their main goals to give the opposition not only no space between the lines but also generally take away from them the chance to get through the centre. Therefore, horizontal compactness comes into play.

Due to that, the defending team occupies the centre of the pitch with a lot of bodies to give the opposition in possession of the ball no space to get through this area. Atletico Madrid are probably the most well-known example of these tactics with the focus on staying compact and giving away no space, neither between the two banks of four nor in the middle of the pitch.

As a consequence, the defending team gives away a lot of space on the wings and the squad in possession see a chance to progress the ball to the final third and create something dangerous. We can see in the image below an example of a team defending deep and they stay compact (horizontally and vertically). Due to that, it seems like the wide areas would be the perfect area to attack for the quad in possession.

Therefore, one of the simplest and most effective ways to progress the ball (at first glance), is to play it to the wide-area and then play a long line pass. Considering this, the one who plays the ball is mostly the full-back or the wing-back and the receiver is normally the winger, as we see in the graphic below in which the theoretical idea of the long line pass is illustrated. 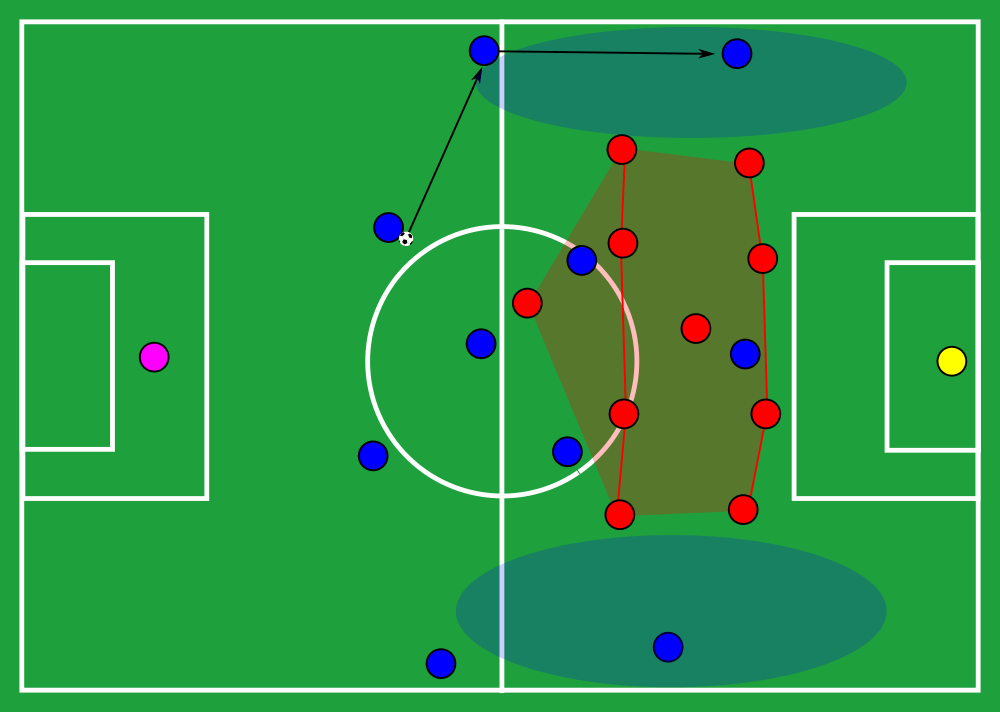 To put it in a nutshell, the basic idea is to get the ball forward in the wide areas since there are too many opponents in the middle of the pitch. Due to that, it is hard to get through there and the men in possession of the ball see the solution on the wings. To play forward in these areas near the touchline, the long line pass is the most obvious option and due to that a common way of advancing play.

The first advantage which immediately comes to mind is the already mentioned aspect that it is a simple vertical pass and therefore the passer of the ball should have no problems executing this action. Furthermore, there are no real complicated movements, runs or changes of positions required as the players are already in their usual positions. Even if you play, for example, with inverted full-backs who move into the space in front of the other defenders, the wider positioned centre-back can play this simple ball towards the winger or striker/midfielder who drifted to the outside. In light of this, a long line pass seems to always be an option.

However, there is this one huge disadvantage on the other side which is the main reason why the coaches like the current PSG head coach Tuchel do not want their players to play this kind of pass. The huge disadvantage is that this ball brings the receiver in an awful situation in which the opposition can easily put pressure on him to win the ball.

Before we dive into the problem of the long line pass in a bit more detail, I want to note that you rarely have situations like the one in the graphics above and we now talk about situations how they are in the actual game when the defensive team shifts quickly enough over to the respective wing.

The first and probably greatest problem which occurs is that the receiver has the opponent (mostly full-back) behind him and makes the first contact with the ball with the face towards his own goal and the back towards the actual game, as we can see below.

In this position, it is easy for the defender to win the ball as the receiver is in a bad position (with the face towards his own goal) and additionally the options for the player are limited. When we say that a player on the ball has basically eight directions to go to (simplified), then five of them are in this situation not possible (violet in the image below) due to the touch line or the defender behind him.

So, he just has three ways (blue) to dribble away and none of them will bring him in a much better and beneficial position. Besides, when the other opponents work well together and use effective movements to put pressure on the player on the ball, he will have even fewer options. 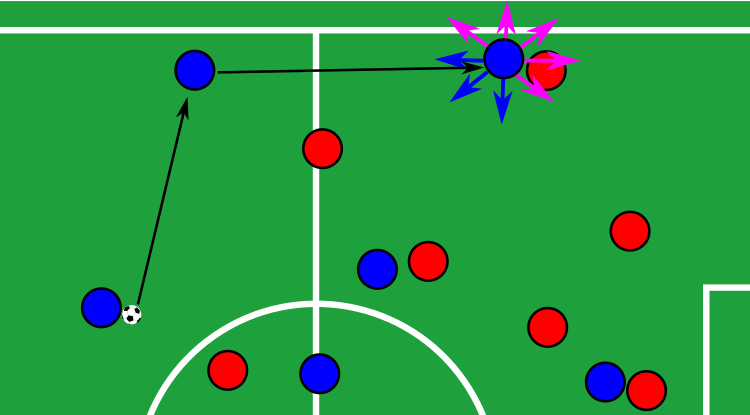 Due to that, we can often see that a team want to provoke the pass to the full-back and then also the long line pass during the press by eliminating all other options. They want to bring the opposition exactly in this situation in which the receiver of the long line ball has limited options.

As the last point in this tactical theory analysis, I will shortly summarise Tuchel’s speech from that famous video from 2012. He said that when he took over the senior squad of Mainz 05 in 2009 (before that he was the coach of the U19), the players in the training sessions mainly used the long line pass to get forward in the wide areas. However, he knew the already mentioned disadvantages and wanted to use diagonal passes to get forward instead of a long line pass. So, a diagonal pass from the centre to the outside and from there back into the middle (in the final third).

To show his players what he wants from them without constantly telling them on the training ground that they shouldn’t play the long line pass, they often played a training game in a diamond shape as we can see below.

By using this diamond, his players couldn’t play the long ball but still could look for their individual solutions for advancing the play.

The long line pass is a simple ball and an obvious way to advance play, but it has huge disadvantages as it puts the receiver of the pass in a bad situation. Because of that, it is also quite common that a team tries to provoke this pass to then execute a press. Due to the position next to the touchline and the bad body orientation of the player, it is a preferred situation to win the ball. In light of this, it is logical that coaches like Tuchel aren’t great fans of it.