Ramy Bensebaini’s (27) summer departure in Gladbach continues to take shape. The Algerian national player has been flirting intensively with Bundesliga competitor Dortmund for several weeks. And apparently, the parties are getting closer and closer when it comes to changing arrangements.

After making his entrance into European football through Belgium and France, Bensebaini was part of Borussia Mönchengladbach’s summer overhaul in 2019 that saw the Algerian left-back make the switch to Germany. There, he played under Marco Rose for 2 years already.

This tactical analysis will look at what Bensebaini has brought to Borussia Mönchengladbach as well as ways to improve if he is to maximize his undoubted potential. This scout report will also analyze whether he can fix Dortmund’s problems on the left-hand side in order to challenge Bayern Munich in the title race next season.

Nico Schulz couldn’t impress with his performances since his arrival in Dortmund and therefore, the club would like to sell him. Raphael Guerreiro is one of the most technically gifted left-backs in world football, providing an outstanding offensive impact. But since he is very offensive-minded, his defensive awareness and work rate is not good enough at that level. So, he might be a better option in central midfield as a creator in Dortmund’s game.

Due to that fact, Sebastian Kehl might analyse the market for a new left-back who is able to play in both, a back-4 and a back-5, for Rose’s flexible system. A player, who already played this role under Rose, is Bensebaini. That’s why it is not a surprise that he is heavily linked with a move to Dortmund. Bensebaini provides better statistics in defense and still has impact in the attack. 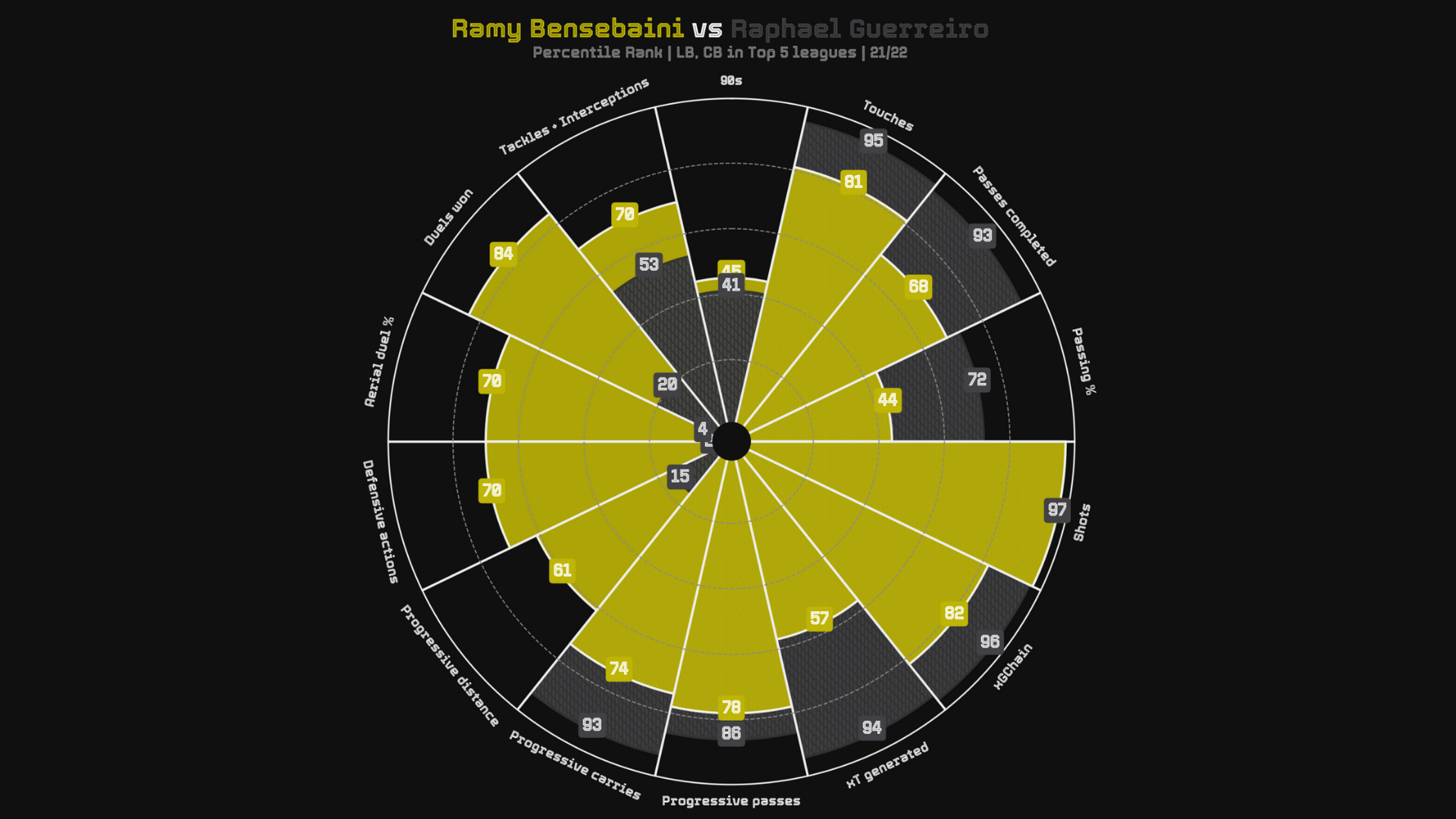 Ramy Bensebaini’s heading ability is both a defensive and offensive weapon that Borussia Mönchengladbach utilized to full effect. Bensebaini’s height, 186cm, reflects the fact that he has started his career as a central defender, before now playing the majority of his games at left-back.

This has meant that in an area that is less attacked aerially, he has a height advantage over many of his direct opponents. Bensebaini is the left-back who provides the 3rd most aerial duels in the Bundesliga, with 4.55 per 90 minutes.

He has a very high jumping reach that allows him to get his head on the ball ahead of his opponents. His towering figure coupled with his aggression in the air makes him intimidating when he is defending, and difficult to mark when he is attacking the ball.

Offensively, in set-pieces, his ability to identify vacant spaces helps him exploit the situation and provide a threat on goal. He is able to read crosses and time his runs to arrive at the ball at the correct speed. He uses his agility and movement to get away from markers, which creates dangerous situations for Borussia Mönchengladbach.

This is exemplified below, showing a set-piece situation where Bensebaini has scanned the area around him and has seen a space where he can use his powerful running to move into. 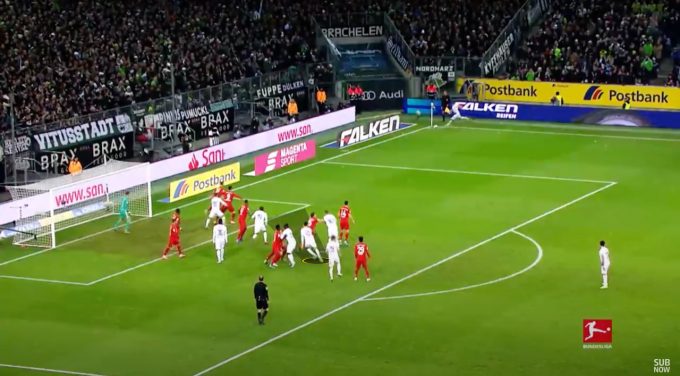 As others around him are stood still and making little movements, his aggressive nature is shown in his eagerness to get to the ball and attack the space where he thinks the ball will arrive. His jumping reach and the power he generates with his head allows to him to score the goal. 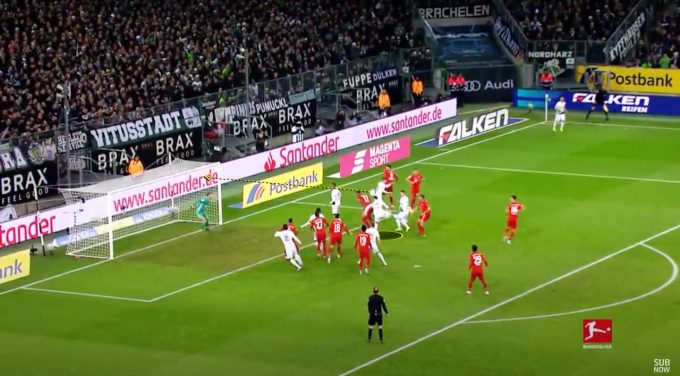 Defensively, Bensebaini is able to use his presence and power to come for balls in the air with dominance. Winning the ball at the highest point possible allows him to put more distance on his header and push his team up the pitch.

This is shown in the image below, where he challenges for the ball with aggression. His direct opponent does not jump for the ball with him because of his authoritative nature in attacking the ball. Bensebaini’s ability to reach the ball in a high position, on the pitch and in the air, allows him to put more distance on it and give his teammates the chance to challenge for the ball in a more advanced area. 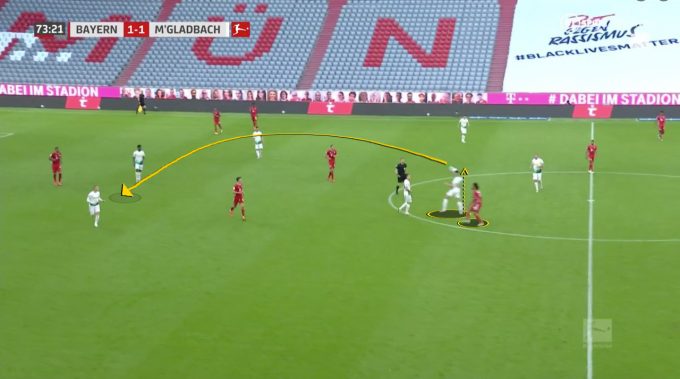 Ramy Bensebaini possesses great quality in defending 1v1 situations. In his position, left-back, he deals with a high number of take-ons from opposing wingers every game. He has the highest PAdj Interceptions per 90 minutes in the league, with 9.98.

His interception technique is the key factor in helping him defend 1v1s. He has the ability to use his body to show the opposition into the areas he wants. This comes after Bensebaini assesses the space around him to understand where he wants to force the attacker to go.

Ramy Bensebaini’s ability to react quickly to the situation as well as his timing to put his foot on the ball are all assets that make a him one of the most difficult players to go past in the Bundesliga.

The situation above shows his competence in defending 1v1 situations. After assessing the area around him, Bensebaini uses his body to show the opposition player the outside space, opting to use his pace to deal with the attack. His ability to keep his eye on the ball and time his tackle, allows him to intercept the ball cleanly; keeping it in possession for his team to start their attack.

However, with such an aggressive approach to intercepting the ball, there is always a chance for mistimed tackles which lead to fouls and the creation of dangerous situations for the opposition. Firstly, Bensebaini’s initial positioning prevents him, a lot of the time, to become proactive in defending 1v1s.

This means he has to be reactive as he is often caught out of position. Instead of blocking passes and being in a position to deal calmly with a developing attack, he frequently finds himself in situations where he needs to sprint back and slide tackle to recover the ball.

As a consequence, Bensebaini can occasionally be reckless in tackling and can go to ground too easily instead of simply putting his body behind the ball and intercepting it cleanly. His rash tackling technique allows the opportunity for opponents with quick feet to win fouls and take advantage of the Algerian defender being on the ground. 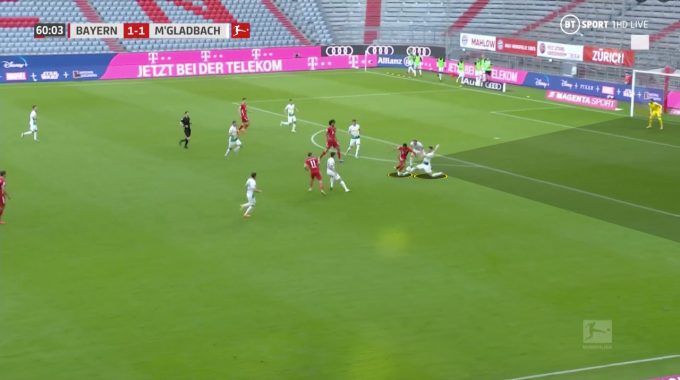 This is illustrated in the image above, with Bensebaini deciding to go to ground in an attempt to recover the ball instead of blocking the area behind him and using his body to force the play outside. He did not interpret the space around him and recognize the fact that his team is in a fairly comfortable position with the defenders outnumbering the opposition attackers. In this situation, the forward has pushed the ball away and used the space left by Bensebaini to take a direct route to goal and therefore creating a goal-scoring situation.

Bensebaini’s defensive awareness is an area that has caused problems for Borussia Mönchengladbach. The lack of understanding of his positioning in relation to his teammates’ leaves him in isolated positions, oblivious to the dangerous spaces around him.

As a left-back, he occupies the side of the defensive line, so Bensebaini needs to make sure that he shifts across in the team’s defensive block, in accordance to the ball and the opponent. By not doing that, gaps arise, which create possible opportunities for opposition forwards. 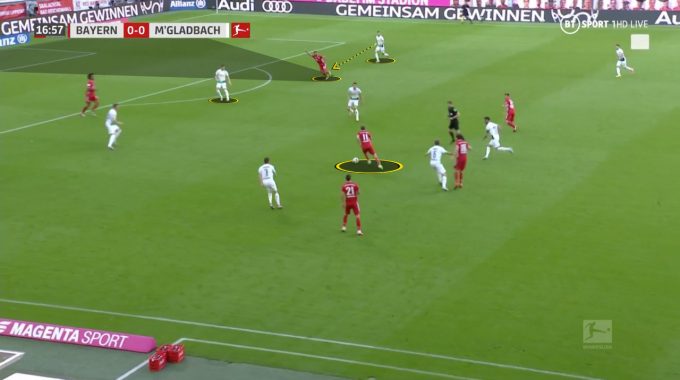 This is shown in the situation above, where the opposition midfielder is in possession, with no pressure on the ball. That allows him to put his head up and assess his passing options. In the same instance, the forward is making a run between Borussia Mönchengladbach’s central defender and left-back, Ramy Bensebaini. Bensebaini’s failure to shift across to keep a suitable distance between him and his fellow defender, creates space for the opposition to play a dangerous ball.

As opponents’ attacks develop, Bensebaini’s body stance, flat footed, and lack of awareness of his surroundings makes it difficult to adjust his body quickly to deal with the attacker. 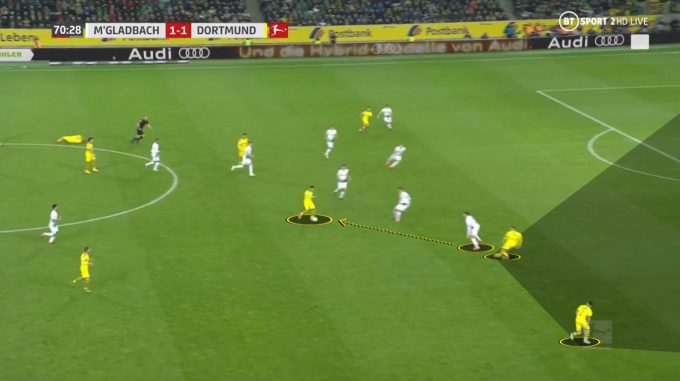 In the example above, the opposition midfielder is ready to play a pass in the space to the left of Bensebaini, with two runners running off him. His body position, facing forward, should be tilted to the side, ready to turn and face the attacker. 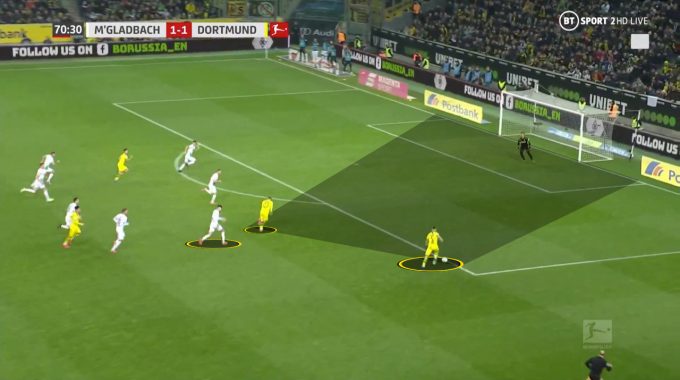 Instead, the pass is played with Bensebaini flat-footed, make him slow to react, which gave the attacker more time to finish off the goal-scoring opportunity.

Continuing his upward trajectory since moving out of Algeria in 2014, Bensebaini possesses qualities that makes him one of the best African defenders that made their way into European football.

With his dominance in the air and his ability in defending 1v1 situations, coupled with improving his defensive awareness and channelling his aggression, Borussia Dortmund would have a top player on their hands with more physicality than Guerreiro. However, his defensive awareness must improve in order to really fix the biggest problem that Dortmund has in their current situation with Guerreiro being too offensive-minded.