Xavier Amaechi has become the latest in an ever-growing number of young English players to move to Germany to continue their development. Rather than move to Germany on loan, as former Arsenal teammates, Reiss Nelson and Emile Smith-Rowe did last season, Amaechi has moved on a permanent deal. In doing so, he has joined the likes of Ademola Lookman, and Jadon Sancho, but with a slight difference. Xavier Amaechi has moved to the 2. Bundesliga, Germany’s second tier of football. Admittedly, he has joined Hamburger SV, who despite not playing in the top division, still boasts one of the highest average attendances in German football. Until their 2016/17 relegation, they had only ever known football in the Bundesliga since the league’s debut over 50 years ago.

Amaechi has left Arsenal without ever making an appearance for the senior side, with the promise of first-team football in Germany. That’s a huge gamble from HSV. However, they believe they have seen enough in the 18-year-old to think he can contribute to their promotion efforts, having failed to bounce back to the Bundesliga in their first attempt last season.

Beginning in the esteemed Fulham FC academy, Amaechi moved to Arsenal as a 12-year-old. At just 18-years-old he has been allowed to leave the former premier league champions with a rumoured compensation fee of £2.25 million. In this scout report, I am going to explain why this could turn out to be an excellent piece of business for Hamburger SV and how Xavier Amaechi can use this opportunity in Germany to springboard his career as those other English talents have before him.

Amaechi carries himself with real confidence on the pitch and has the talent to back it up. He has quick feet, bagfuls of tricks, and pace to burn. He can use both feet and can play on either flank, but he is predominantly left-footed. When playing as a right-winger, he often looks to cut inside, and when playing as a left-winger he looks to go down the outside, always staying on his left.

Whenever receiving the ball, Amaechi instantly looks to beat a player. His 62.3% dribble success rate is very strong, particularly for someone who attempts 12.59 dribbles per game.

If HSV follows through on their promise to give Amaechi regular first-team football, it would be no surprise if he is one of the most fouled players in the 2. Bundesliga next season. He is quick and purposeful when on the ball, and has neat footwork, making him a handful for any full-back.

There are times when his confidence to take on players pays off, and other times when perhaps a pass was a better option. This will improve as he matures as a player.

In the analysis below, he chooses to take the player on, rather than using the open left-back, losing possession. This is despite the left-back being in a great position to play the ball into the space highlighted for Amaechi to run onto. 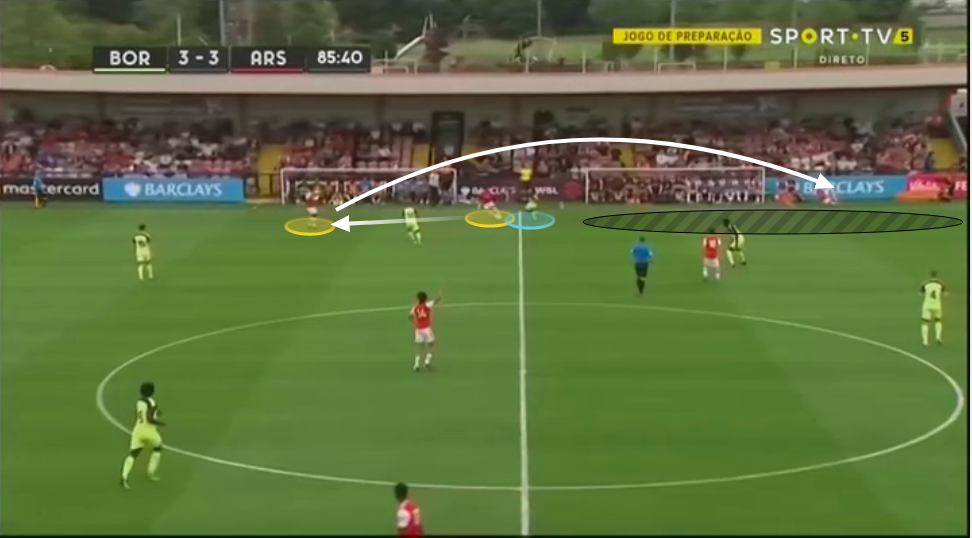 Amaechi plays on the right flank more frequently. Being left-footed he likes to cut inside and drive into the half-spaces. He has a habit of cutting inside too horizontally and not breaking the lines enough. He also has a tendency to run into areas where there are plenty of defenders.

When he makes the move inward, Amaechi takes shots from long distance. However, he hasn’t scored from that range yet. He hits the target with just 35.8% of his shots.

Amaechi played predominantly on the right-wing for England in the U17 European Championships last year. He played in all four games that England won but wasn’t picked for the semi-final against the Netherlands, which England went on to lose on penalties. We can see from his shooting map in this tournament that he is more accurate from outside the box than inside – or perhaps it tells us he lacks composure inside the area. Either way, by working on his finishing from inside the 18-yard-box, his shooting accuracy should increase quickly.

Although he didn’t score in the tournament, we can see the areas he likes to shoot from, the majority from cutting in from the right-wing onto his left foot.

Perhaps he likes to cut inside from the right too often. That may be down to his preference for his left foot, or quite possibly his confidence that he can dribble past two or three players in quick succession, which is not unusual for him. 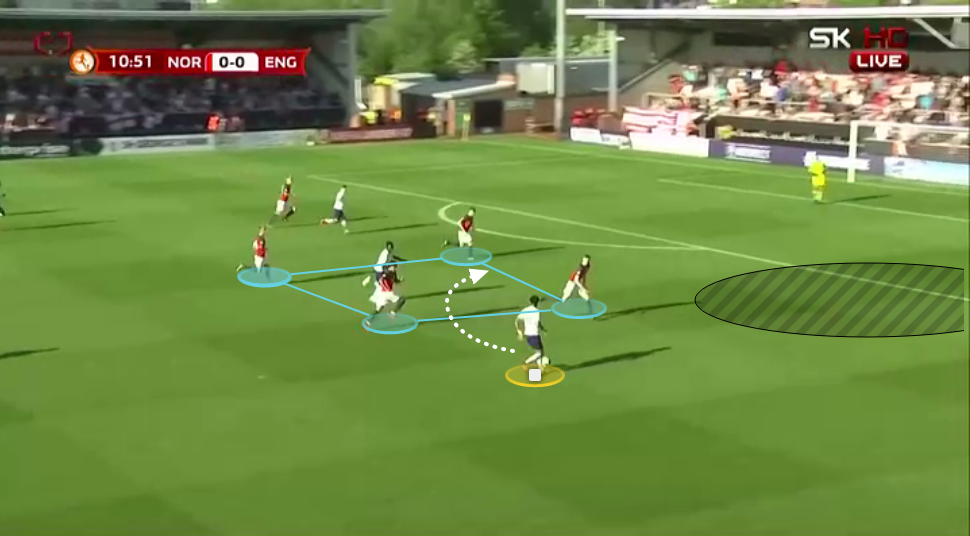 As mentioned before, he has a penchant for dribbling into areas heavily populated by defenders. Above we see an example where he has decided to cut inside, rather than use the space down the line. Four defenders await his move inside, and he loses possession. It is nevertheless a tribute to his dribbling ability, and his strong left foot, that the defenders have clearly been instructed to shove him onto his right and not let him make the move inside towards goal. Amaechi would benefit from varying his dribbling intentions more often.

One of Amaechi’s strengths is his awareness of what is around him. In the below tactical analysis we see that the defender is ready for Amaechi to go down the line onto his stronger left foot, and look to cross the ball from the left flank. Amaechi is aware of the positioning of the trio of defenders and knows that cutting inside could end in lost possession. 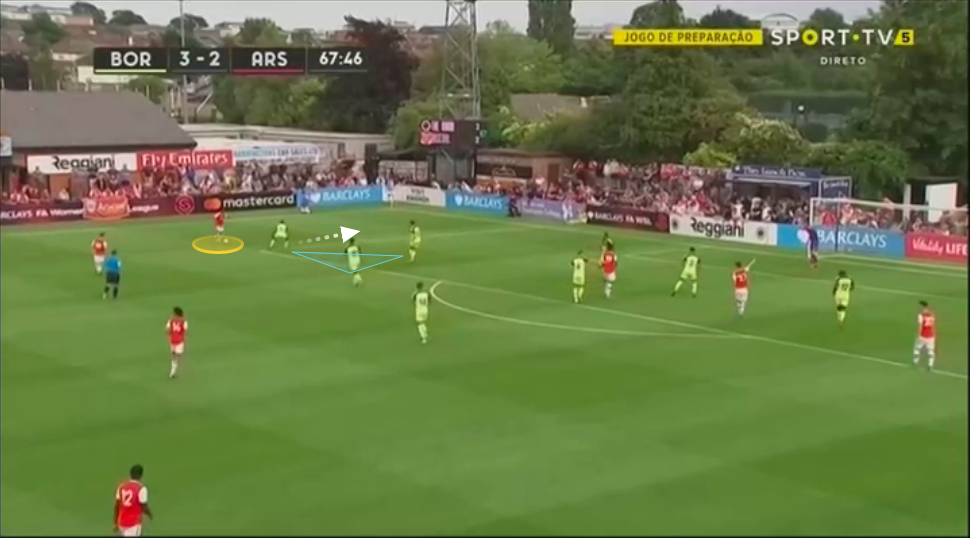 In these situations, you will see Amaechi use a dribble move, frequently one or two stepovers, as a hesitation in order to create doubt in the defender. This gives him a fraction more time to make a cross when he eventually moves down the line.

He is aware of the positioning of his teammates and opponents, but most interestingly the space around him as well. When coming short to receive the ball, with his back to the opponent, he takes a low and explosive position. 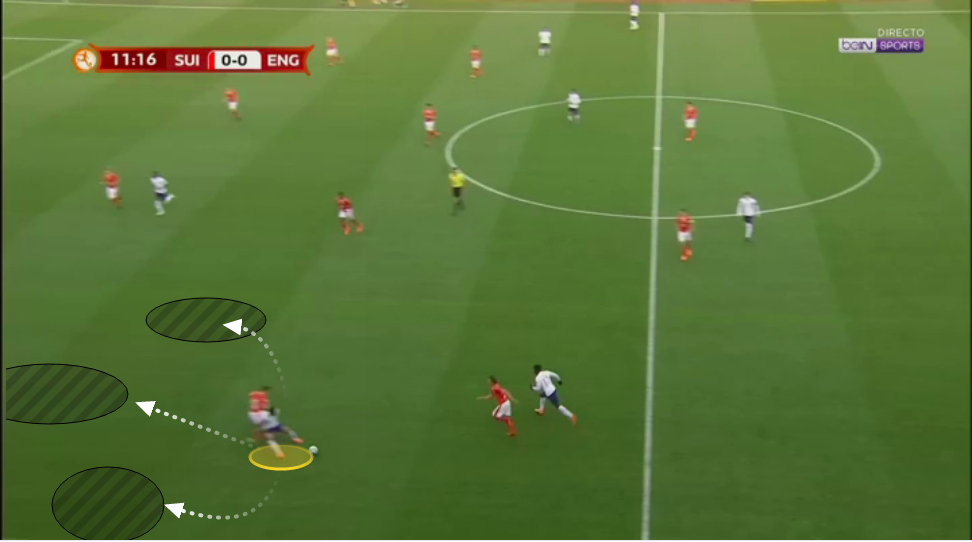 From here he can turn with the ball in two directions. He’s aware the defender has to stay close as allowing him space to turn is too much of a risk. Yet due to his pace, even with the defender so close, he can still accelerate away from this position. He has the awareness to know there is space behind him, and often, as was the case here, will even let the ball run through him with a dummy, turn, and run behind the full-back.

One of the most striking things about Amaechi is the energy he plays with. He plays with a freedom on the ball, but if he loses it, he shows great intensity to win the ball back. 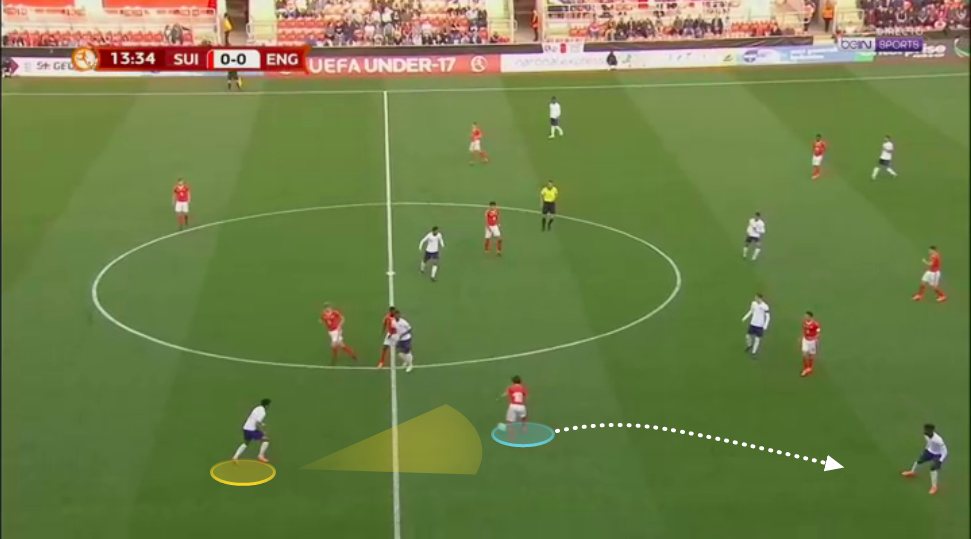 Amaechi is obviously a very attacking player and naturally takes high positions. Despite this, he is willing to work back into deeper areas and support his full-back.

There is a huge advantage to Amaechi’s willingness to track back and defend that benefits the team offensively. Once he regains possession, which he does frequently winning 56.3% of his defensive duels, Amaechi can show his skill as a ball-carrier. He can turn defence into attack in seconds due to his pace and ability on the ball. 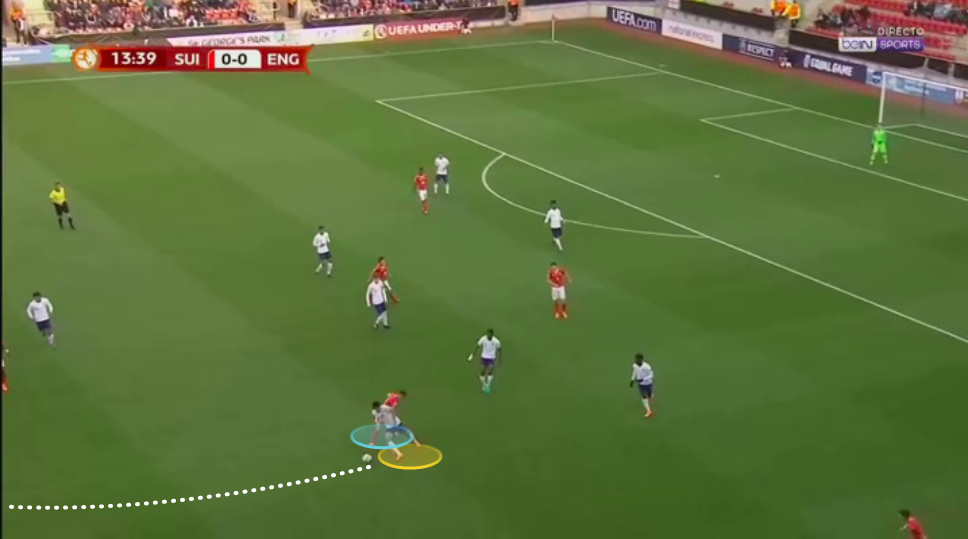 There are few defenders that can keep up with a player as fast as Amaechi, and we can see in the image below how effective he is carrying the ball forward from defence into attacking areas. 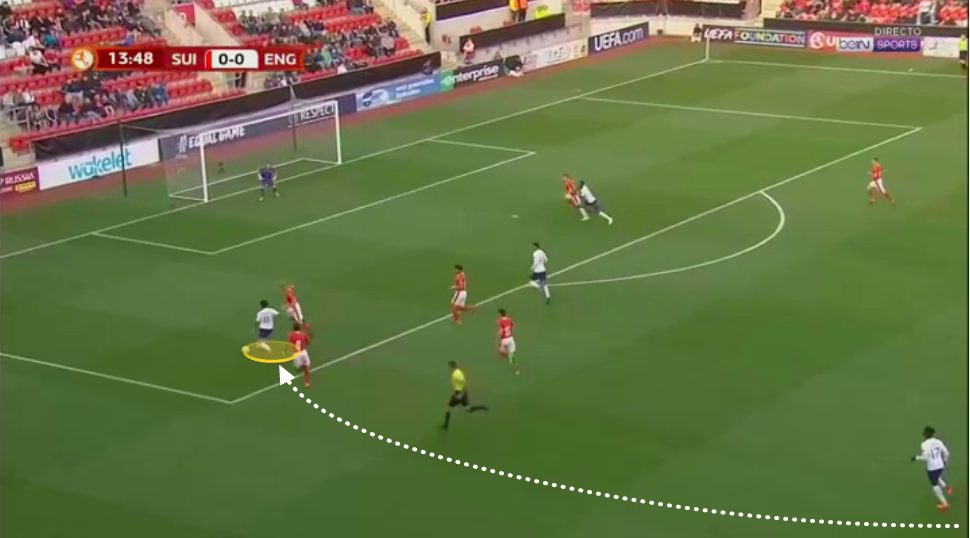 Linking with the centre-forward

Amaechi enjoys playing wide when on the left flank. There is a definite advantage to him playing so wide. Often he is left in a 1v1 situation, which due to his pace and dribbling is a good result for him. However, his speed and ability with the ball in tight spaces are both huge assets. If he were to play closer to the centre-forward at times, he would receive the ball in better goal-scoring areas and could use his pace to get behind the defence. When a centre-forward comes wider to support him, the results can be devastating, and this is something he should look to use more often. 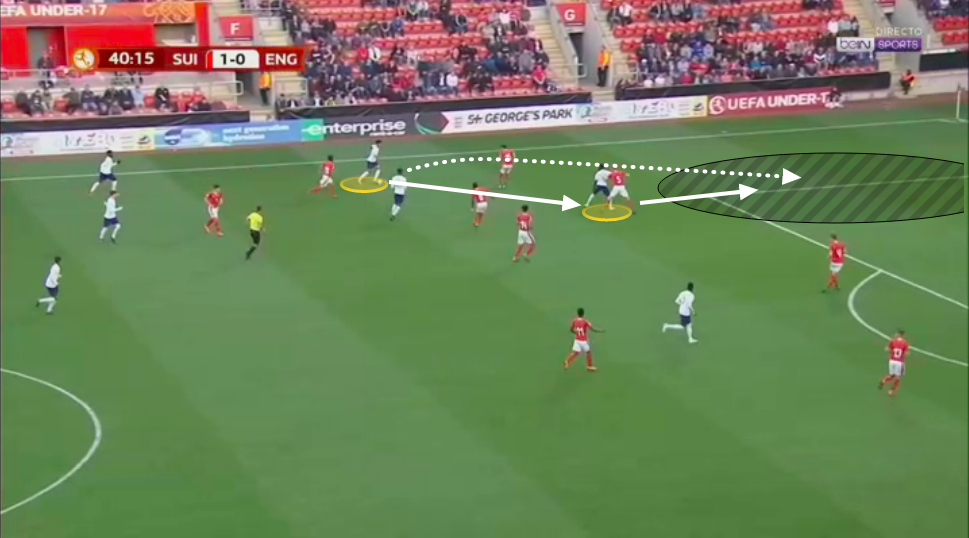 It is as much Amaechi’s responsibility to create these opportunities as it is the forwards.

How he fits in at Hamburg

Hamburg’s tactics were predominantly based around a 4-1-4-1 or a 4-2-3-1 last season. It is not known yet whether Amaechi will play as a right or left-winger, but there is a good chance he is used on either side.

By bringing in Xavier Amaechi, Hamburg are bringing in a type of winger they don’t have. Khaled Narey is a useful option on the right-wing and scored seven goals and made four assists last season, but he is a different type of player to Amaechi.

Narey’s dribble completion rate was 42.43% last season, and he was completing just 23.26% of his crosses. In fact, there were 23 games in the 2018/19 season where Narey didn’t make a single accurate cross. He averages two touches in the box, whereas Amechi averages 3.3, suggesting his higher completion rate of dribbles are also getting him into more dangerous positions.

Left-winger Bakery Jatta’s cross completion rate was also just 30%, yet 50.7% of his dribbles were successful. He scored six goals and made two assists, and he can play as a second striker. We may see that to accommodate Amaechi if Narey keeps his place.

Their current crop of wingers struggle to get the ball into the forwards. The goal for Amaechi is clear. He is an excellent dribbler all ready. His 40% cross completion rate is better than both Narey’s and Batta, but he can still work on this.

Hamburg’s options on the wing are respectable but not outstanding. They need to add goals to their side. Despite a fourth-place finish in the table last season, there were nine teams who scored more than them. In fact, Hamburg scored the same amount as 15th place Sandhausen. Amaechi needs to add goals to his game too, but to begin with, Hamburg will be hoping he can be a creator, rather than being a goalscorer. With a run of first-team football though, and some work on his finishing, he could become a real threat.

He isn’t a player that is going to consistently whip in deep crosses for the forwards to attack, particularly not aerial crosses. That’s not necessarily a bad thing if Manuel Wintzheimer starts for Hamburg. He is just 1.8m tall. New signing Lukas Hinteresser, who scored 18 goals for VFL Bochum last season, is 1.92m tall, but only two of his goals came with his head. The majority of Amaechi’s crosses come from him taking the ball to the goal-line and pulling it back. One look at Hinterseer’s shooting map shows how dangerous he is in the box, particularly in the areas Amechi looks to seek out. The two of these players linking up could be the beginning of a fruitful partnership.

Hamburg are taking a risk by bringing in a player yet to play competitive senior football, and also reportedly promising him a starting place. After the success Jadon Sancho has had in Germany it appears other sides are attempting to replicate it by bringing in other young British players, who are thirsty for starting football.

His seemingly endless amount of tricks will no doubt excite Hamburg fans this year, and there aren’t many English players who use these skills so prevalently and with such success. One thing for certain is Amaechi will no doubt have countless YouTube montage videos showcasing his skills by the end of this season.