Leeds United cruised to a 3-1 victory over Bristol City on Sunday to kick off their campaign in style. Goals from Pablo Hernandez, Patrick Bamford and Jack Harrison sealed a comfortable victory for the West Yorkshire side. This tactical analysis will look at how they did so.

It wasn’t quite the frenetic levels of Bielsa-ball we saw for much of last season from United, and City did their part in containing them. But it was still a dominant display from Leeds, who cracked the deadlock thanks to a wonderful strike from Hernandez. Bamford and Harrison then added close-range efforts in the second half.

A late strike from Andreas Weimann inspired a flurry of attacks in the last 10 minutes for the Robins, but it was too little too late as Leeds claimed all three points at Ashton Gate.

This analysis will have a look at the tactics of both sides, and how it influenced the final result.

Bristol City went with a 4-2-3-1 shape, that often leant more towards a 4-4-1-1. Famara Diedhiou led the line for the Robins acting as a target man but was generally isolated throughout the match.

Kasey Palmer showed glimpses of his talent in the No10 role, but City never really saw enough of the ball to really let him shine. The Robins generally defended in two banks of four behind Palmer, with Tomas Kalas and Taylor Moore at centre back. While they weren’t able to keep Leeds out, they did display some adeptness at carrying the ball out of defence. 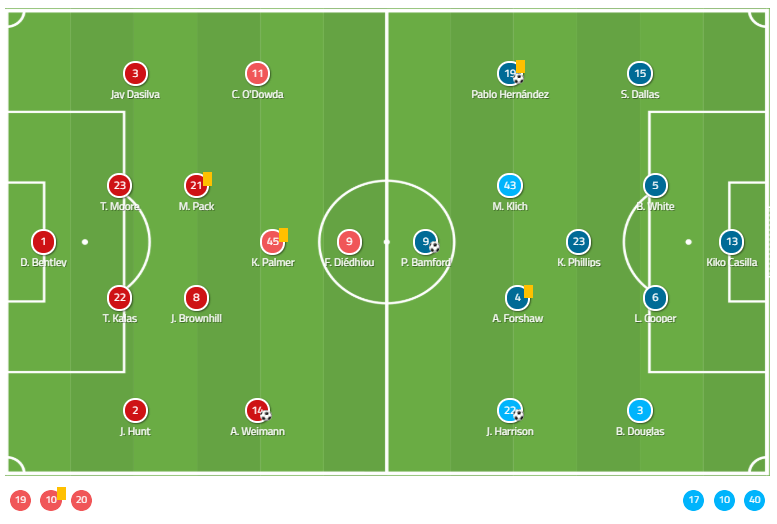 Leeds went with their 4-1-4-1 system that we saw last season under Marcelo Bielsa. Kalvin Phillips was back in his role as the deep pivot in the midfield, with Adam Forshaw and Matheusz Klich performing driving roles in front of him.

The line was led by Bamford with Kemar Roofe not even on the bench, amidst rumours of a supposed move to Anderlecht. Ben White made his first start for United at centre back, and produced a solid and assured performance, not looking out of place with the ball at his feet.

Leeds were generally in control of the ball for much of the match, with 60% possession. This meant that their frantic press was less of a dominant feature throughout this match. When building in possession, United’s first port of call was, of course, Phillips. The academy product fulfilled his usual role of linking the defence to midfield.

Another feature of Bielsa’s Leeds that helps with their build-up is the vertical rotation of players coming to collect the ball. Klich and Forshaw performed this action throughout the match, constantly moving to shift City’s shape and make space to collect the ball. 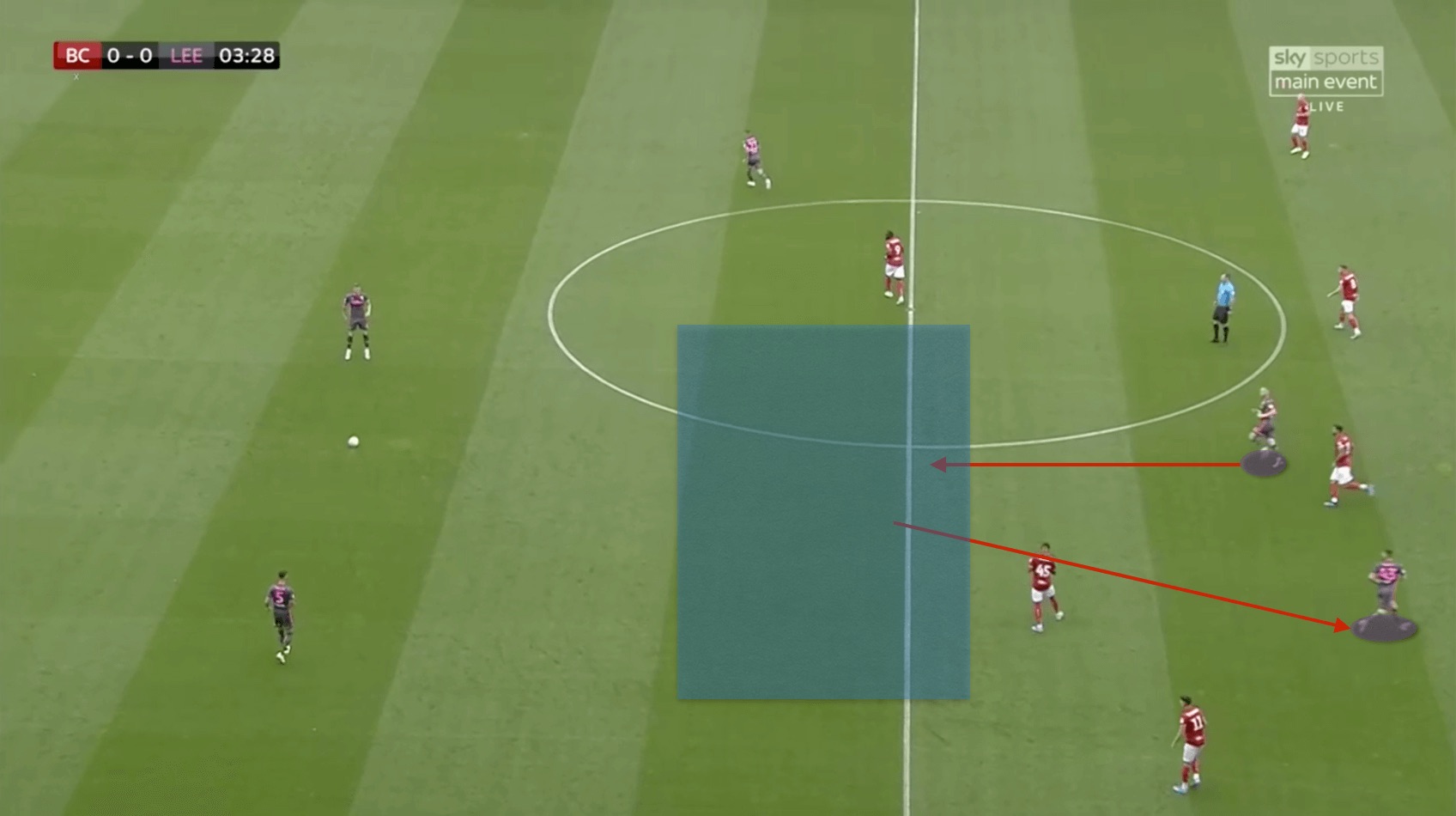 The Robins, however, generally made themselves quite difficult to play through. This meant that Leeds were often looking to make sweeping switches of play. While this is a feature of their style, they resorted to doing this more often than usual due to the compactness of their opponents. 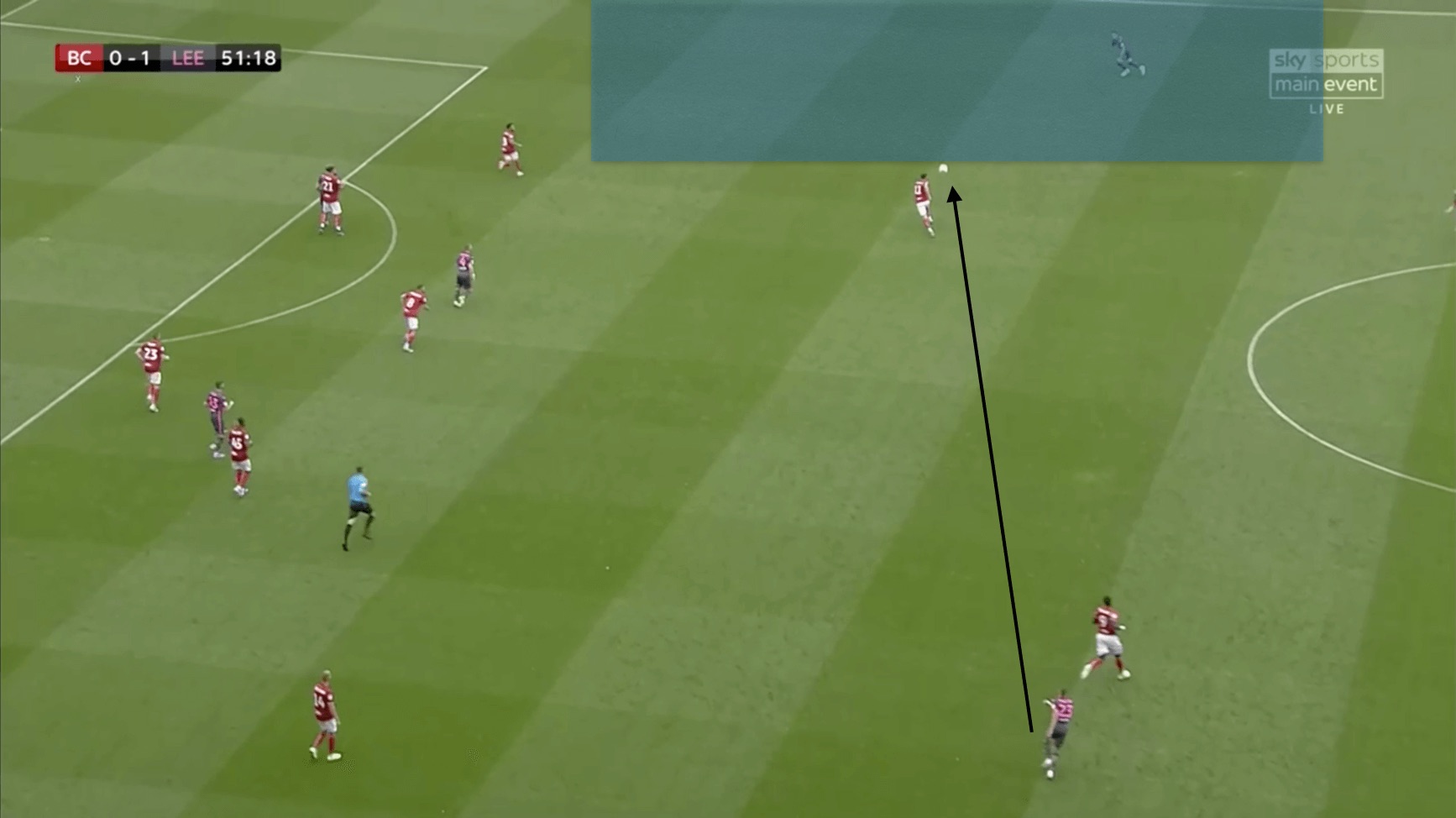 These frequent switches meant that Leeds had to be effective in the wide areas. This led to there being more onus on the full-backs, Barry Douglas and Stuart Dallas, getting forward to help overload in the wide areas. Below, we can see Douglas doing so and creating an overload.

It was interesting to see Leeds in a slightly different light to how we often saw them last season. They were something of a surprise package with their high tempo style, but Championship managers will have started adapting to circumvent this. It appears, though, that Bielsa’s side are also capable of breaking down opponents in a more measured way too.

Lee Johnson seemingly instructed his side to sit a little deeper, and not be drawn into pressing Leeds and having that press broken. Frontman Diedhiou and No10 Palmer were generally the only players putting any pressure on the United backline. As we can see below, it seems Palmer was given the task of shadowing Phillips to try and stifle Leeds’s build-up play. 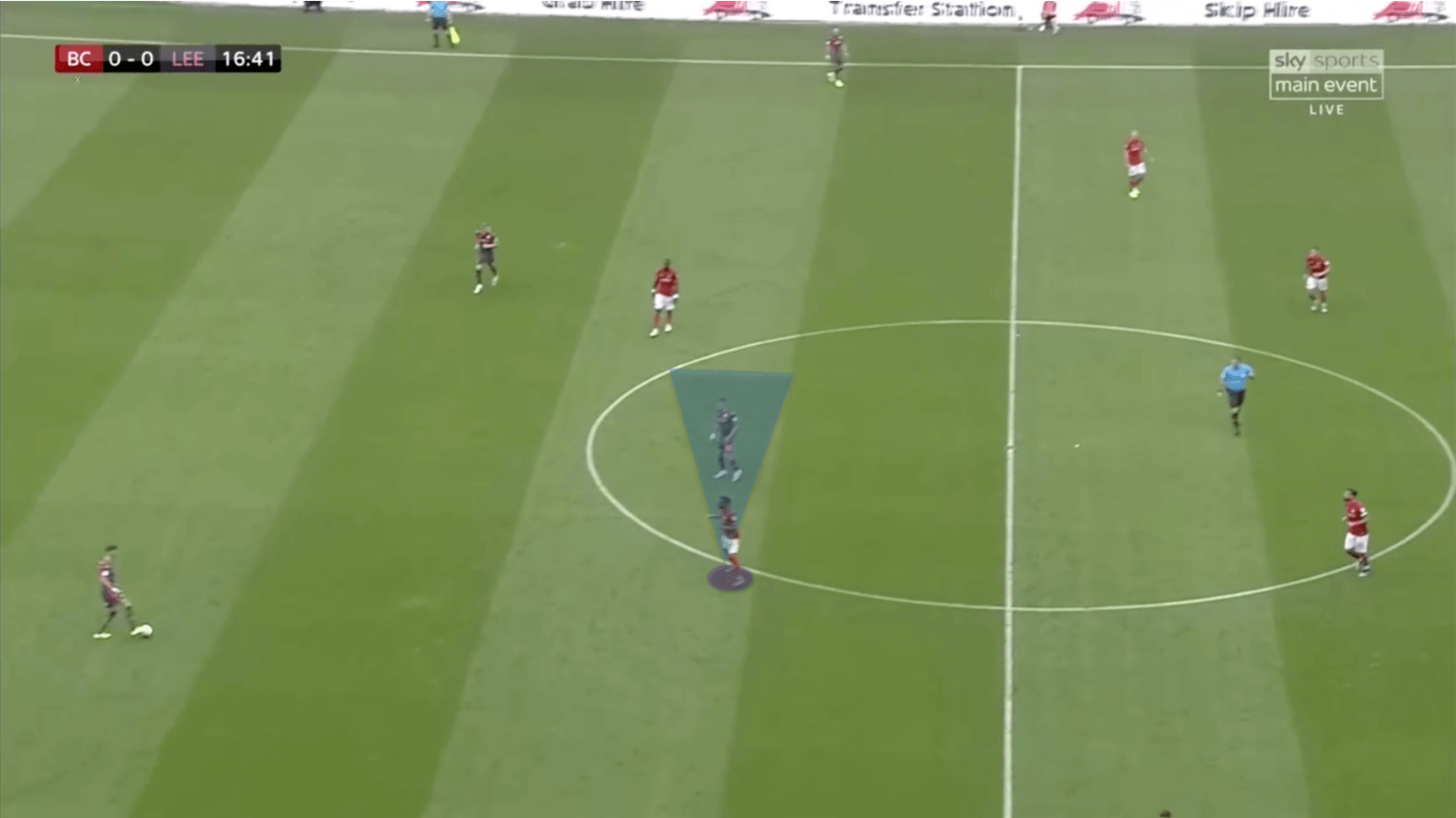 It was generally a solid 4-4-2 shape that the Robins operated with when defending. They sat deep to an extent where, as can be seen below, both Palmer and Diedhiou were sometimes in their own half. This made them relatively difficult to break down, with it taking a moment of magic from Hernandez to break the deadlock. 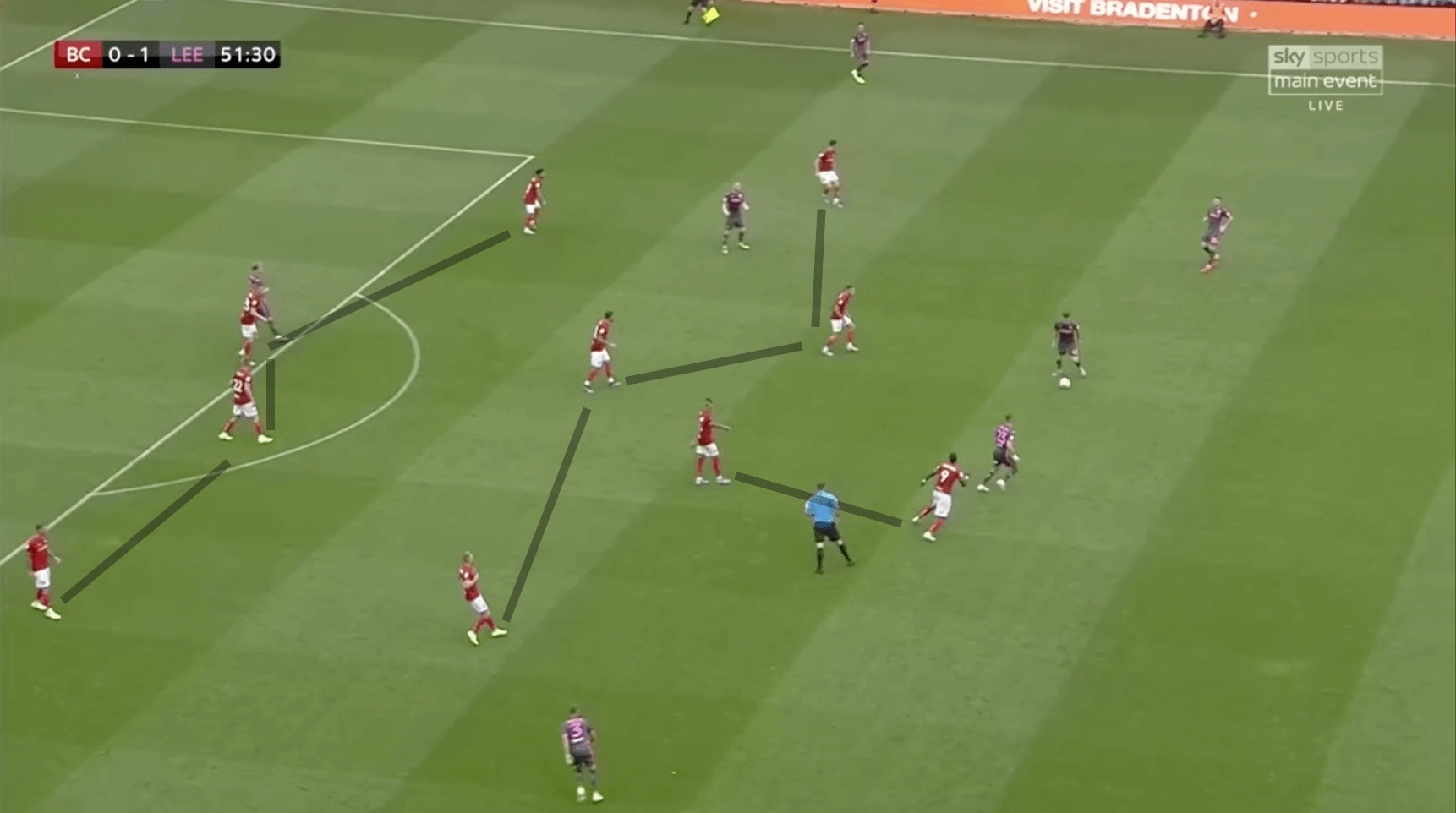 Part of their rigid structure also saw City attempt to shepherd Leeds wide, into supposed less threatening areas. This can be seen in the image below, in which Palmer has split the centre backs and forced White to go wide. Callum O’Dowda then helps shepherd Leeds down the line, where Jay Dasilva intercepts a pass. 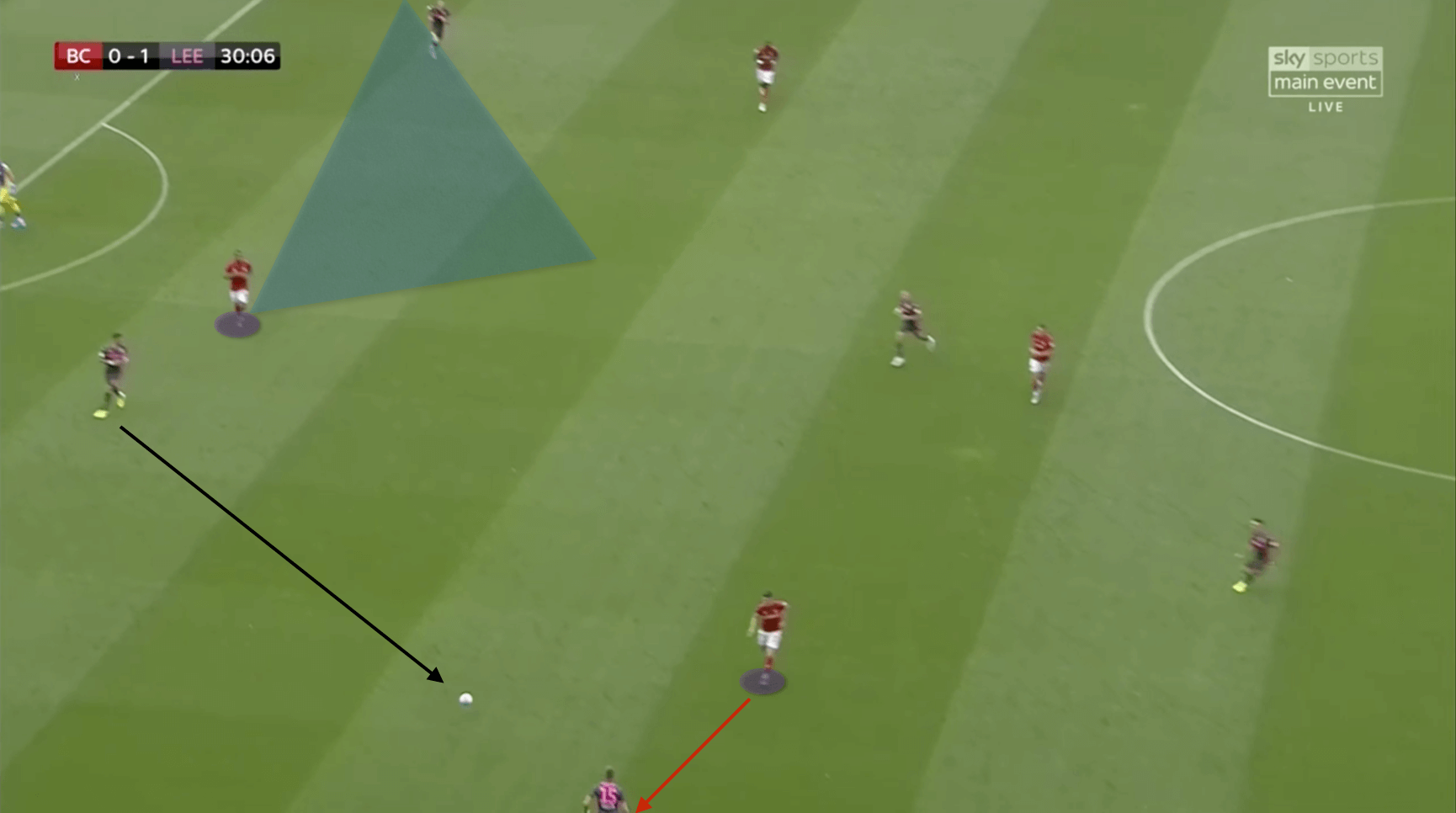 The Robins did not break from their game plan once Leeds went ahead. This often meant their front men were isolated, with their central midfield not offering to many ideas. Centre backs Kalas and Moore offered some drive with strong carries from defence, which helped get the ball to Wiemann and O’Dowda on the wings. 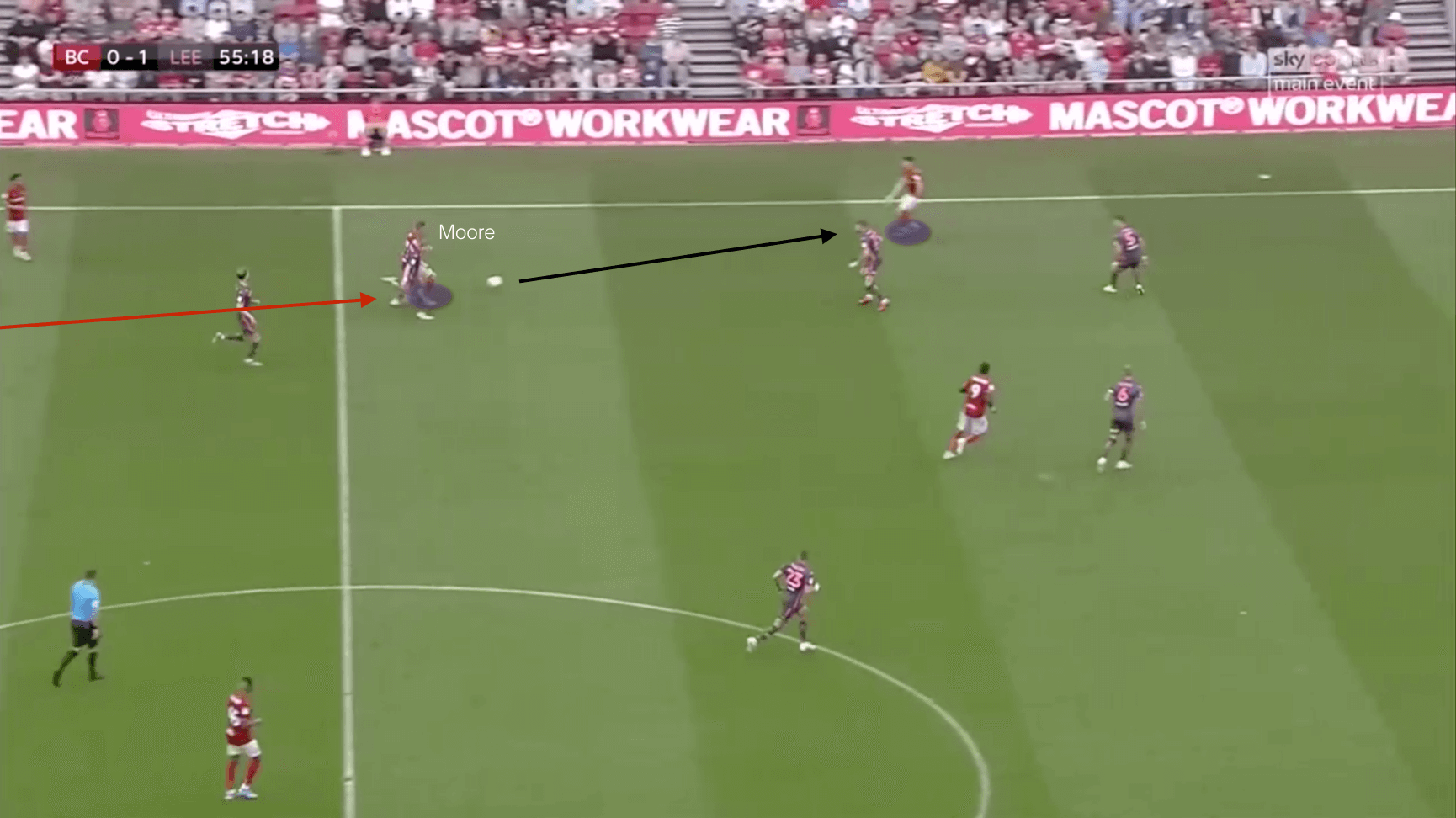 While Leeds’ first goal was courtesy of a wonder strike from Hernandez, the second and third goals held more tactical value. As previously discussed, both full-backs played high up the pitch to help create overloads against a stubborn Bristol City side.

As we can see in the following image, Dallas has made his way into the box from the right-back position. This has pushed back O’Dowda deep into his own area, leaving space for Hernandez to run into and attack. Because of this, the Spaniard is able to comfortably dribble round the Irish winger as he closes him down and provide a cross for Bamford to head home. 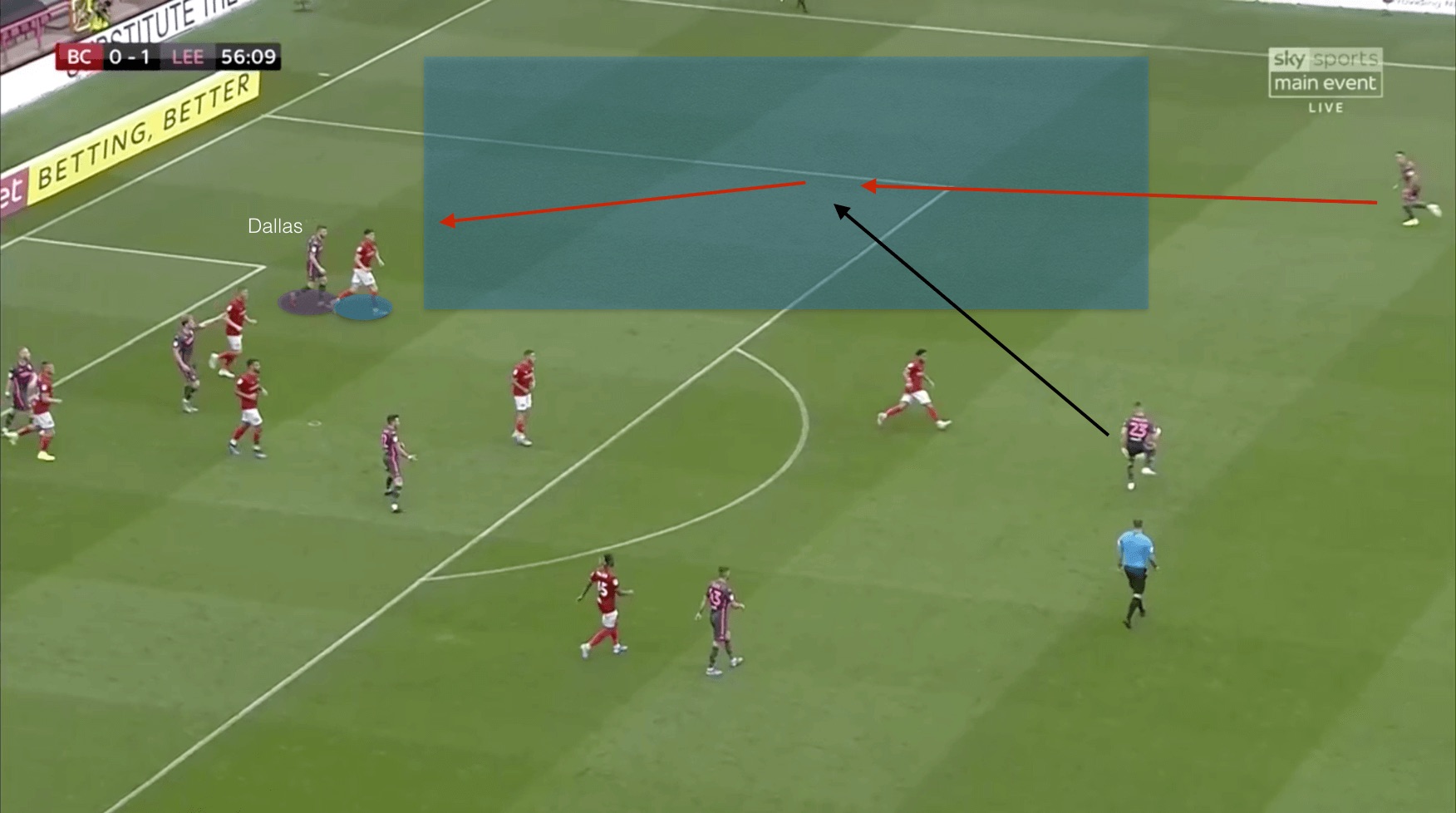 For their third and killer strike, Leeds managed to pull off a nigh-on perfect counter-attack. After Hernandez wins the ball in his own box, he strides forward to find Klich presenting himself for the pass. The Polish midfielder’s run drags a Bristol City player with him, which opens up space for Dallas to run into. 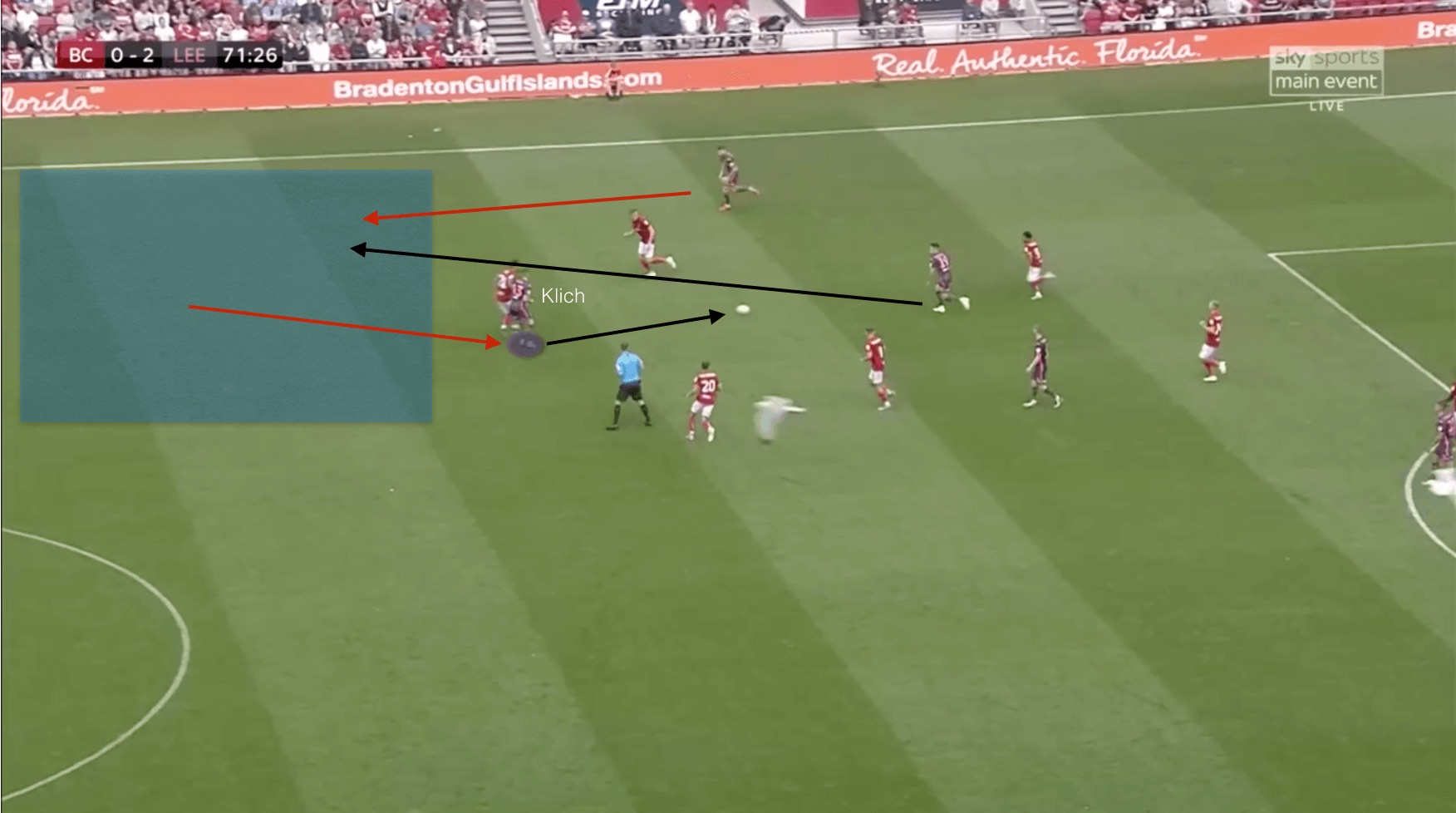 After a quick one-two with Klich, Hernandez picks out Dallas who runs to the Robins’ penalty area, which ultimately resulted in Leeds’s third goal. It was an excellent counter-attacking move and demonstrated the value in United’s midfielders dropping deep to create space.

Leeds were completely on top in a comfortable 3-1 victory at Ashton Gate. Bristol City did manage to stifle their frenetic pace a little, but United’s dominance of the ball gradually wore the Robins down.

It was an excellent team performance from Bielsa’s side, with White acquitting himself excellently on his league debut and Hernandez the stand out performer. The ex-Valencia man grabbed a goal and an assist, as well as starting the attack which led to United’s third.

It’s may only be the first game of the season, but Leeds look ready for another promotion push under Bielsa. Bristol City also have high hopes, with Johnson aiming for a top-six finish this season. He will hope that his side have the chance to blossom more as the season progresses.