Stefan Bell is one of the leaders in the team of Mainz 05. Playing a solid season under Bo Svensson, Mainz seem to finally be established in 1.Bundesliga for long-term. As one of the team captains, Bell plays an important role for Svensson – on and off the pitch. At the age of 30, Bell is a routineer. He already plays for the club since he is 16 despite rumors about a potential transfer to the Premier League.

Role in the system

Bo Svensson lines up his team in a basic 5-3-2 structure during the opponent’s build-up play. When his side tries to press high up the pitch, this can change to a 3-4-3 with one central midfielder moving into a winger’s position and both wing-backs moving up as well. In their own build-up play, Mainz plays in a 3-4-1-2 formation with both wing-backs in midfield and one central midfielder moving higher in between the lines to support the attack building an advanced passing option in the center of the pitch. Bell is used as centre-back on the right side. 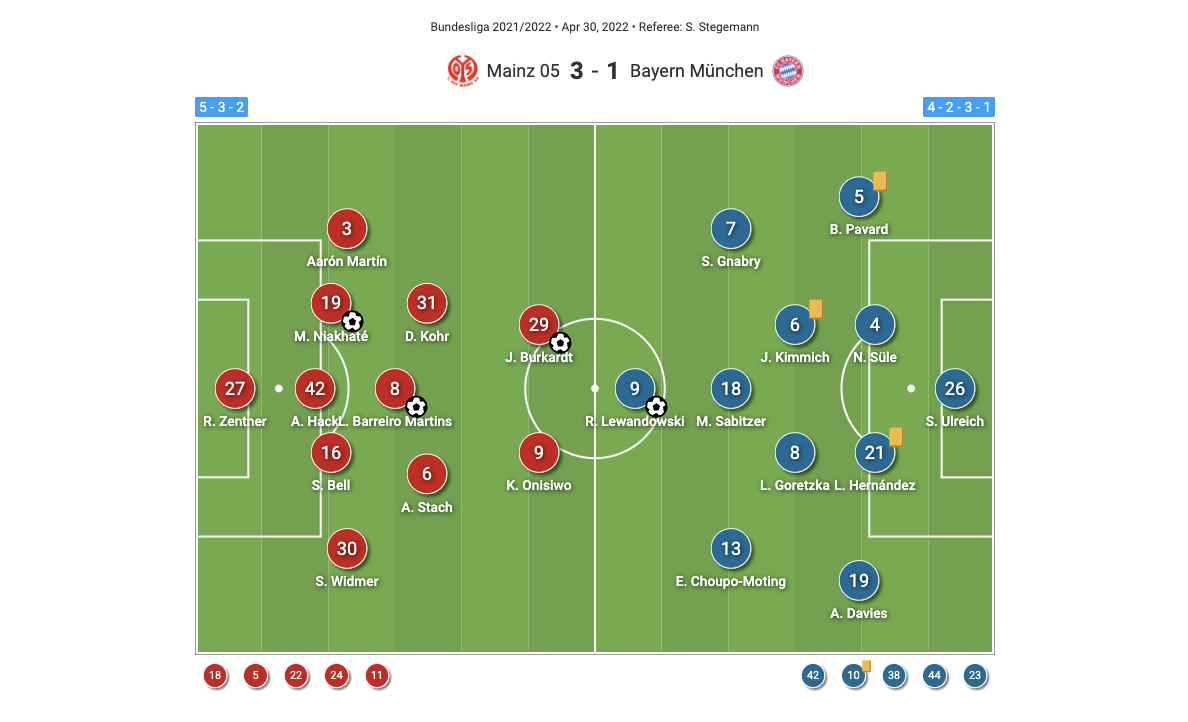 With Hack being injured several times this season, Bell played in the center as well. Playing this role has advantages and disadvantages for Bell as we will see later on.

To get an overview about Stefan Bell’s strengths and weaknesses, we take a closer look at his data and statistics. In the following chart, we compared Bell’s impact to the impact of other centre-backs in the top 5 leagues in the 2021/22 campaign. First of all, we look at his defensive stats.

Bell goes into aerial duels a lot as he ranks in the 91 percentile (5.77 per 90 minutes). In addition to that, he ranks in the 61 percentile in winning these aerial duels. Considering that he provides lots of aerial duels, the succession rate of 63.5% is quite good. Besides aerial duels, Bell provides more tackles than 80% of all other centre-backs in the top 5 leagues. In fact, he provides 17.7 duels per 90. And this by the fact, that Mainz developed into a more offensive side in the last 2 years. However, he only wins 62.9% of these ground duels. This means that 88% of centre-backs in the top 5 leagues provide a higher succession rate. Providing 6.34 interceptions and 3.33 clearances per 90 minutes, Bell is just below average compared to all other centre-backs in 2021/22.

As part of a back-3, Bell plays a big role in Mainz’ build-up play. However, his passing rates are not impressing. The German plays 43.82 passes per 90 minutes – 83.8% of them are successful. A rather low succession rate for a centre-back, ranking him in the 16 percentile only. This gets even worse considering that he does provide less progressive actions than 76% of all other centre-backs in the top 5 leagues. If he plays long balls (7.86 per 90 minutes), only 53.7% are successful. His contribution in build-up play can be seen as a weakness. Especially under pressure, Bell seems to be uncomfortable with the ball.

In attack, Bell is a goal-threat for the opposition. He provides 0.51 shots per 90. This ranks him in the 80 percentile. Especially in offensive set-pieces, Bell is a target player for Mainz due to his strength in winning aerial duels. With 0.08 xGoals per 90 minutes, Bell provides more danger to the opposition’s goal than 63% of all other centre-backs in the top 5 leagues. 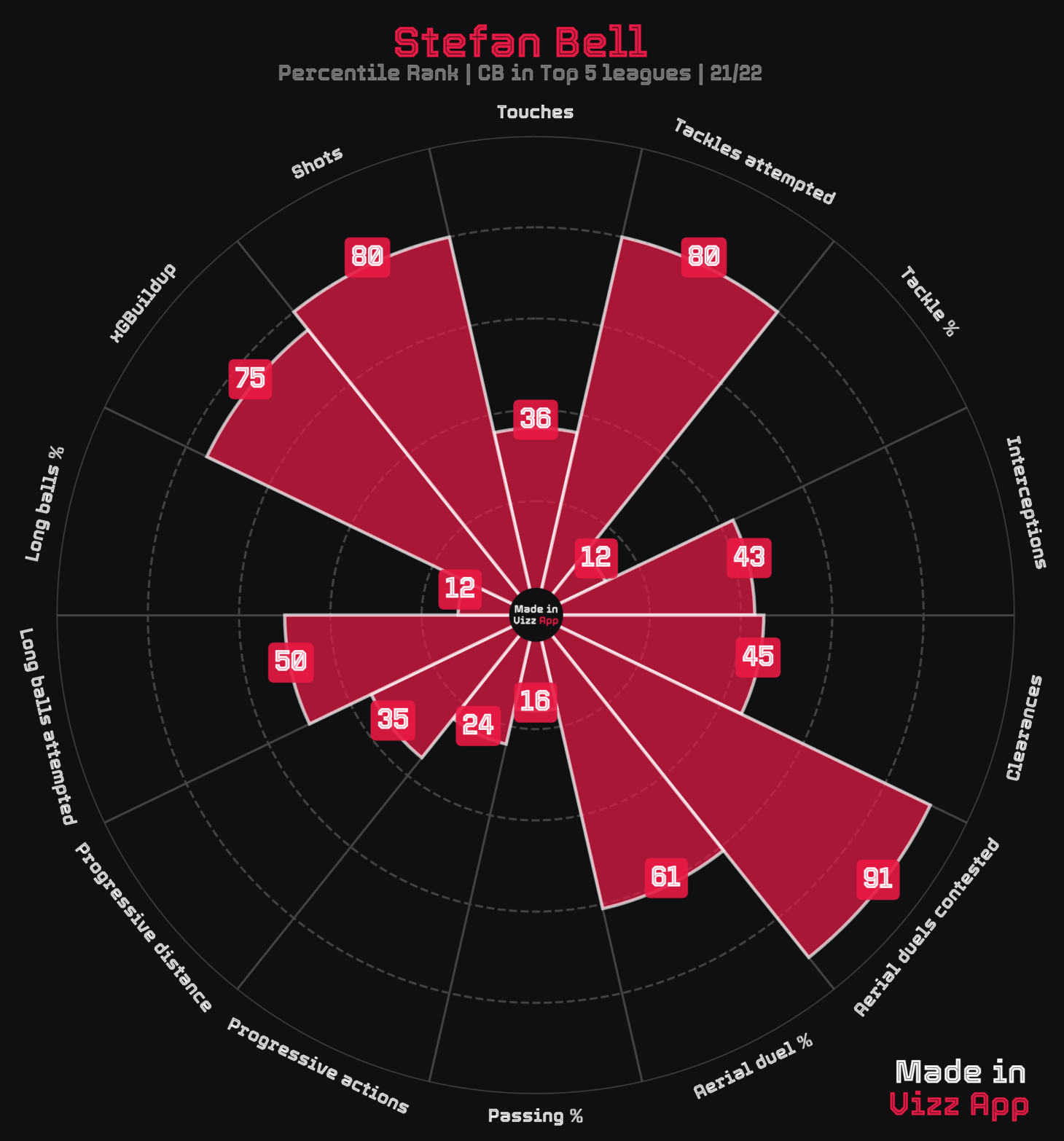 In build-up, Bell has an important task. Especially when playing as centre-back in the backline, he is responsible for the opening pass. Therefore, he often plays to one of the other centre-backs and then, moves out of the backline. 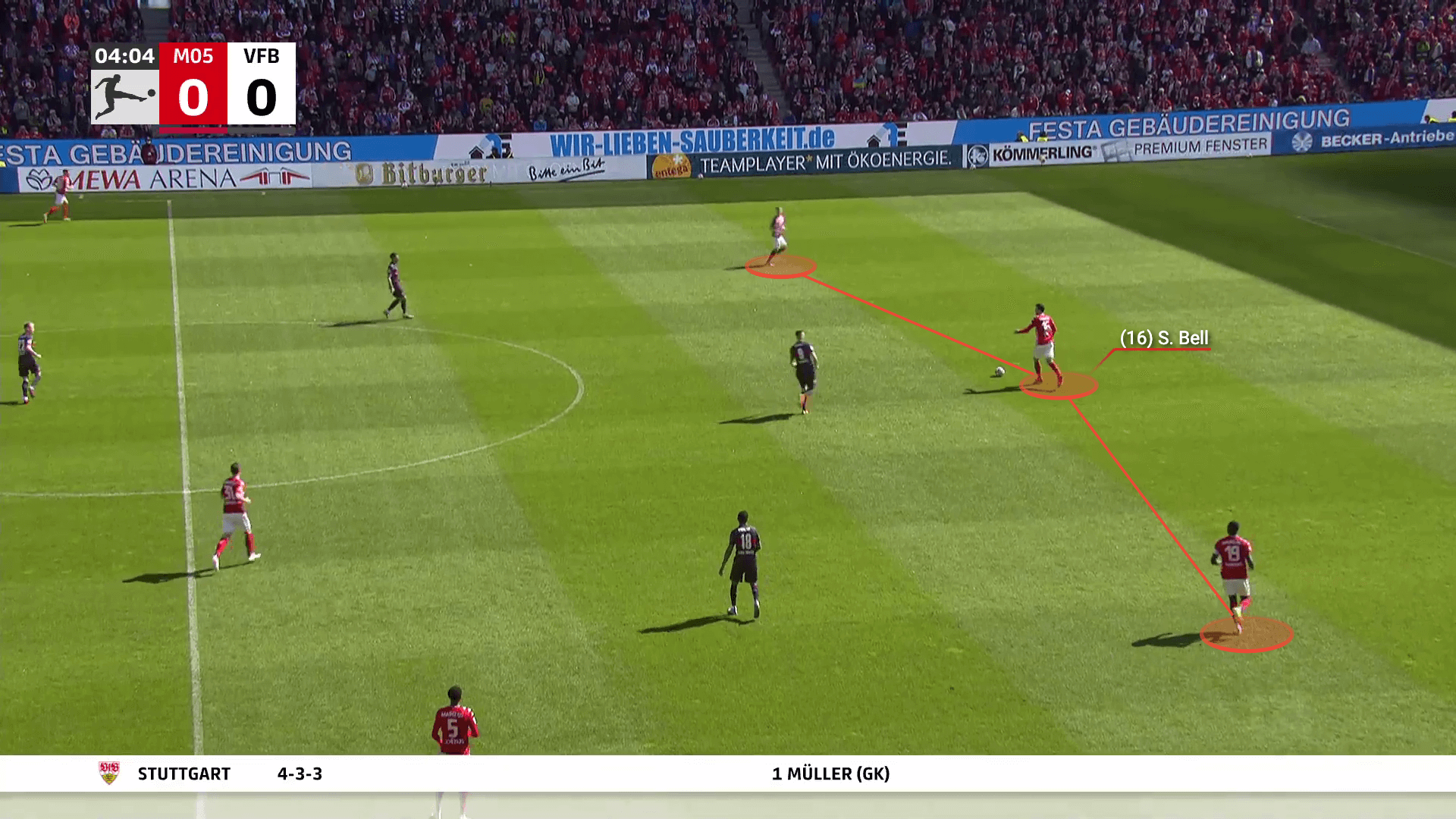 By doing so, he opens space in behind so that his teammates can play to the goalkeeper and forcing the opponents out of their mid-block. Besides that, he forms a triangle with Mainz’s midfielders and provides an additional passing option in the central area. 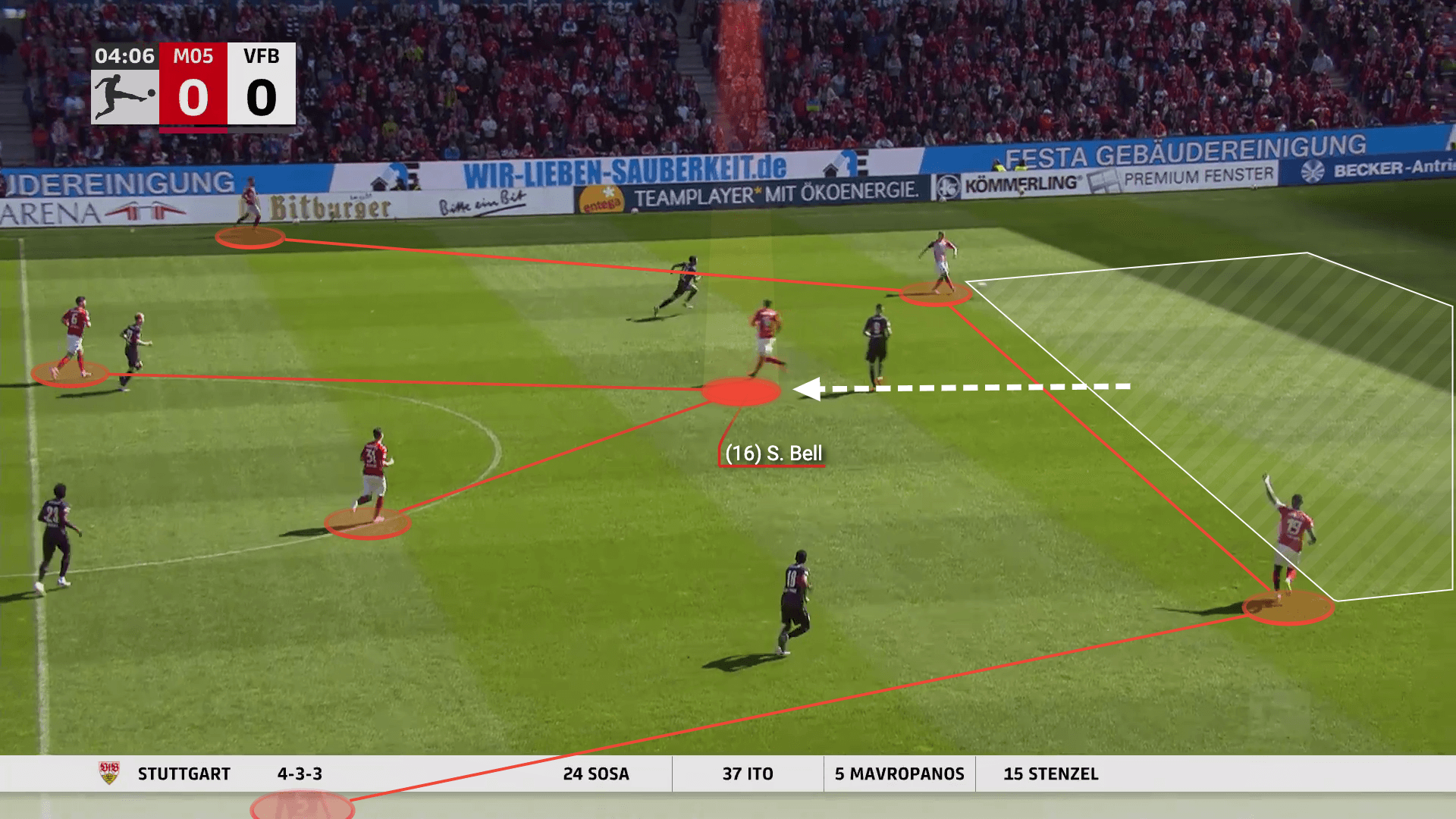 A big weakness of Bell is his passing under pressure. If pressure is applied on him, he often reacts rushed and thoughtless playing the ball to an opponent. As mentioned above, almost every 5th pass is unsuccessful. That’s why the central position in the backline might be not the best option for him to play in.

Svensson asks his centre-backs to push high in order to stay compact in counter-pressing situations. That’s why Bell has the task to defend very high in order to interrupt the opposition’s attack. By doing so, he is moving up to the opponent’s third. 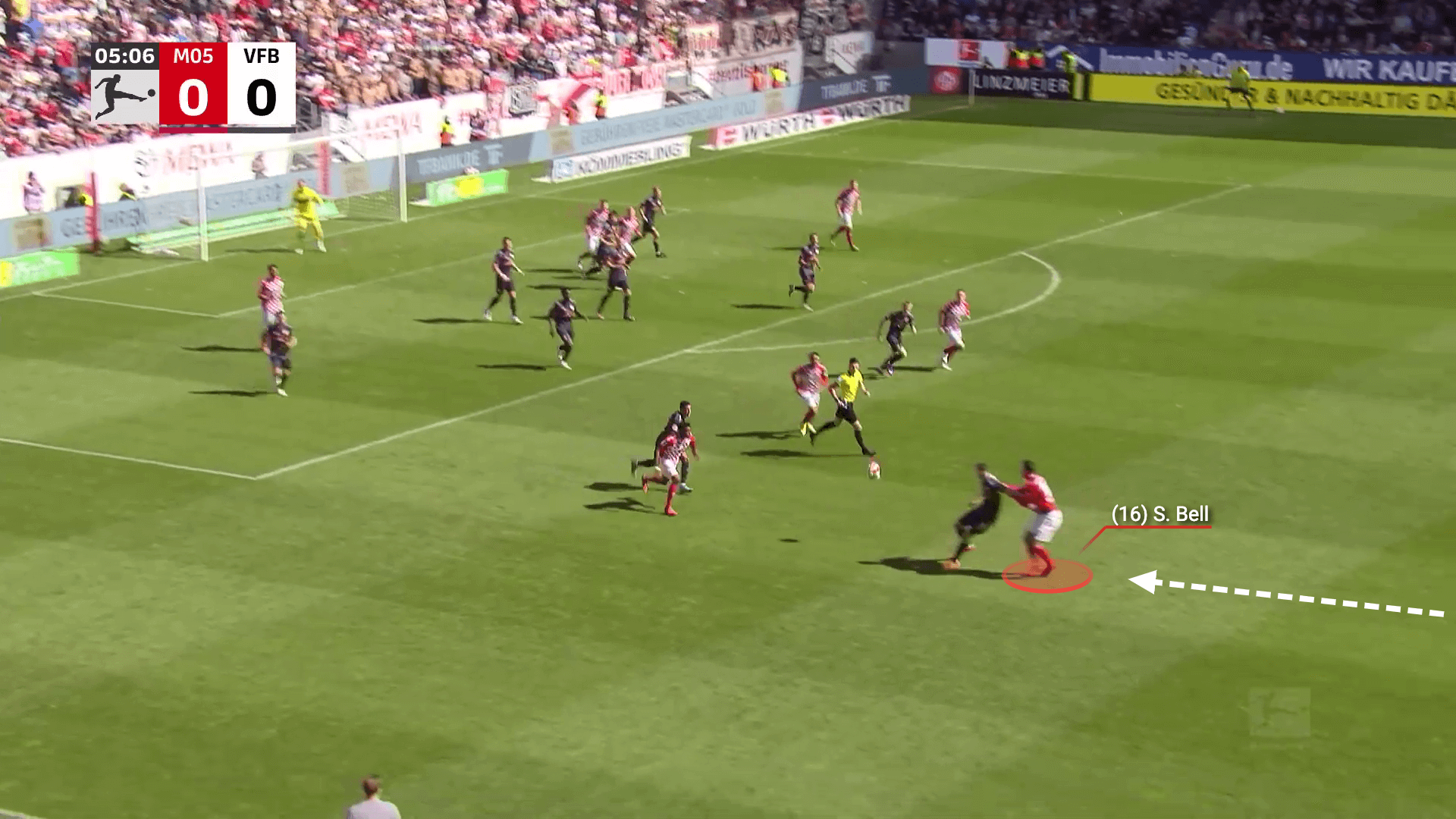 In most cases, he does a tactical foul to stop the opponent’s attack. However, if he loses the defensive duel and can’t stop the attack through a foul, he leaves his team in a 2-vs.-2 or even a 2-vs.-3 situation. 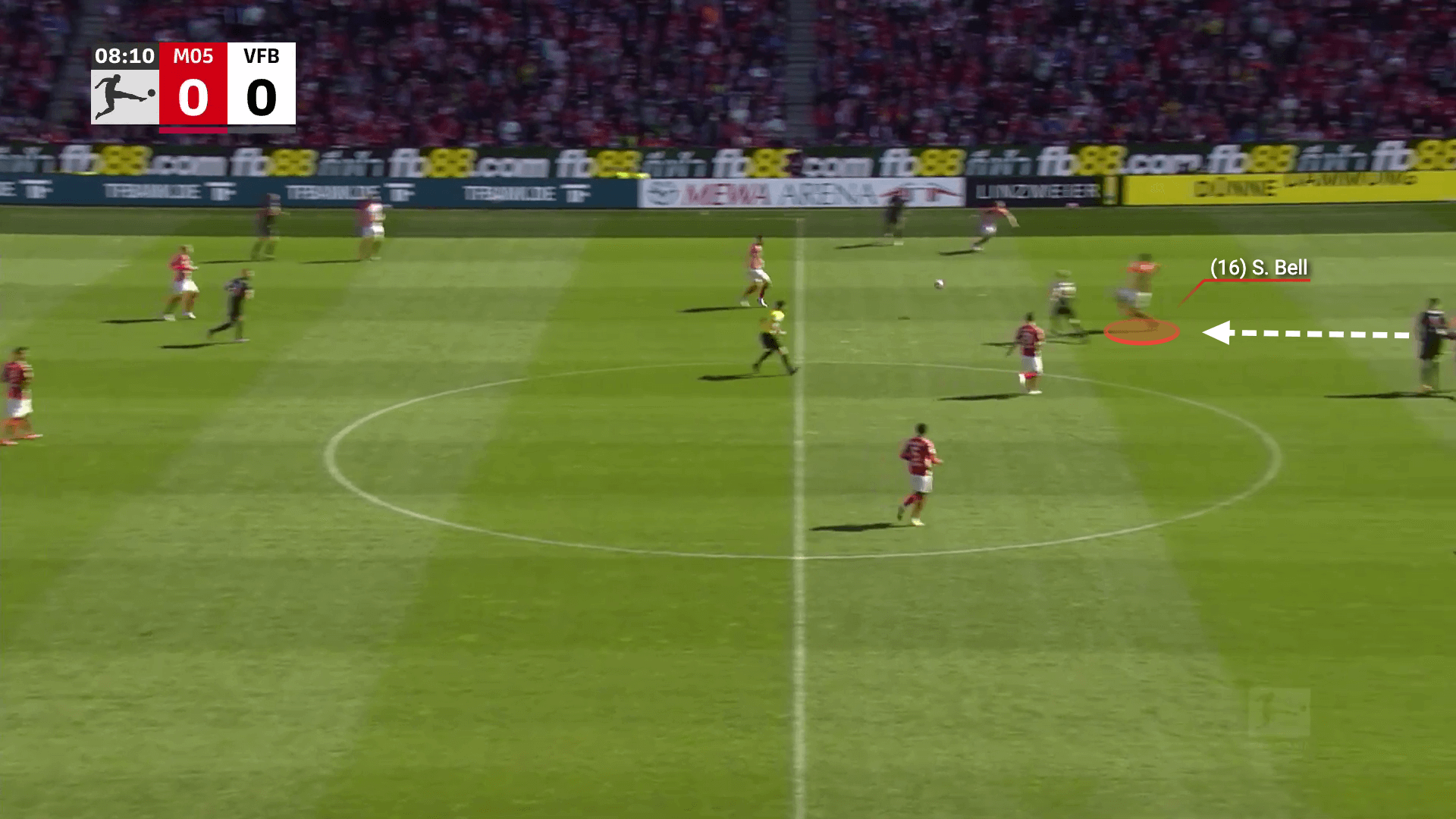 That’s why, Brosinski’s approach to play like that is a high risk ending in goals for the opponent several times. Bell is not a fast player so he can’t fix lost defensive duels. And as outlined above, Bell wins only 62.9% of his defensive duels. 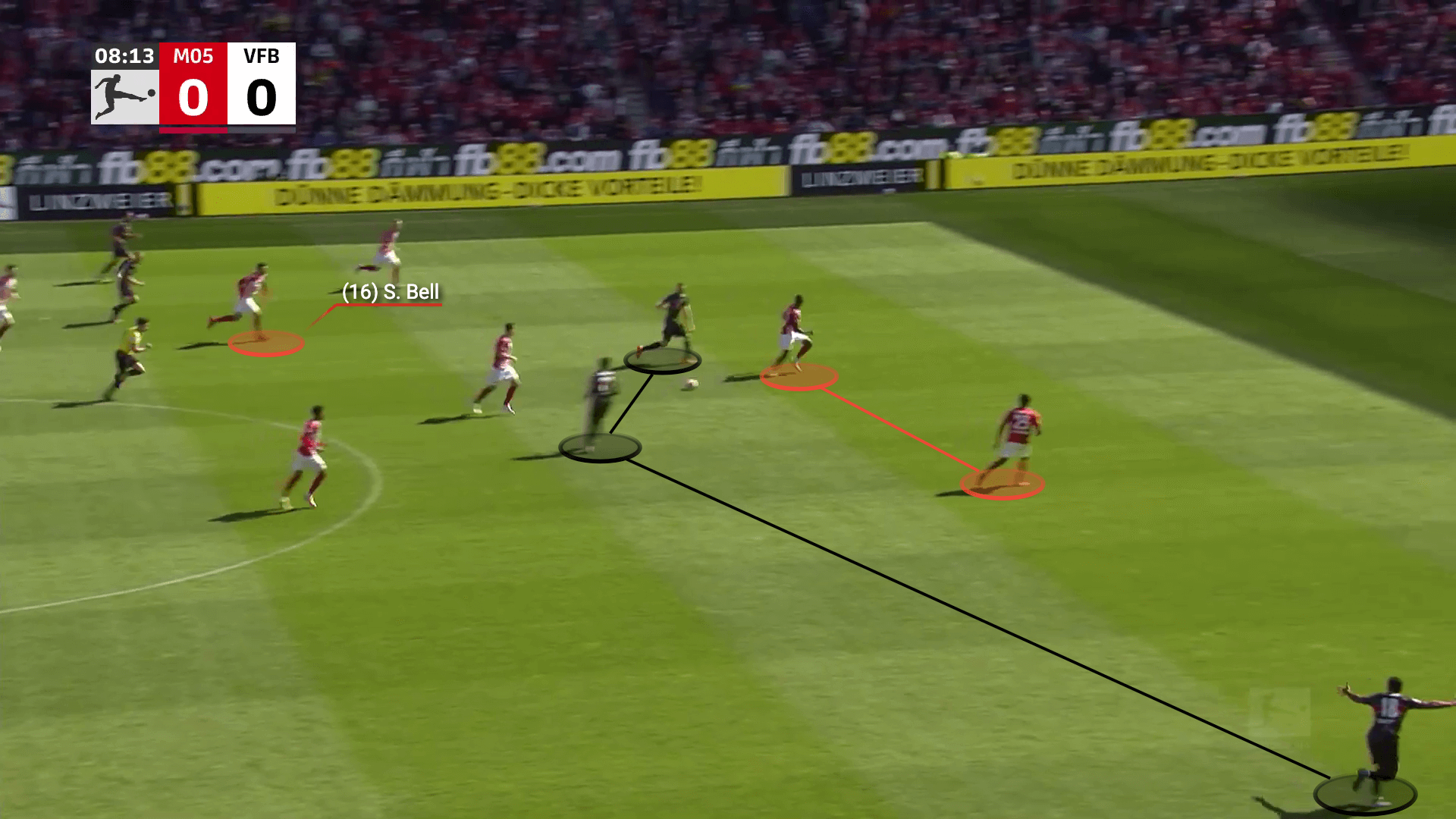 Especially, the two lateral centre-backs in Svensson’s system require pace. Bell (30.7 km/h) can’t provide that. In comparison to Mainz’ other centre-backs, Bell is the slowest player. Robin Hack (32,1 km/h), David Nemeth (32,3 km/h), Moussa Niakathè (34,9 km/h) and Jeremiah St. Juste (36,6 km/h) are all faster. But, Bell has another solution to this problem.

Bell is very good in positioning. Due to his experience, he provides smart movements out of the backline in order to intercept the ball. After that, he is not afraid of supporting the attack. As we can see in the following situation against FC Bayern, Bell recognizes Lewandowski’s run in behind and immediately moves out of the backline to interrupt the attack by intercepting Kimmich’s pass. 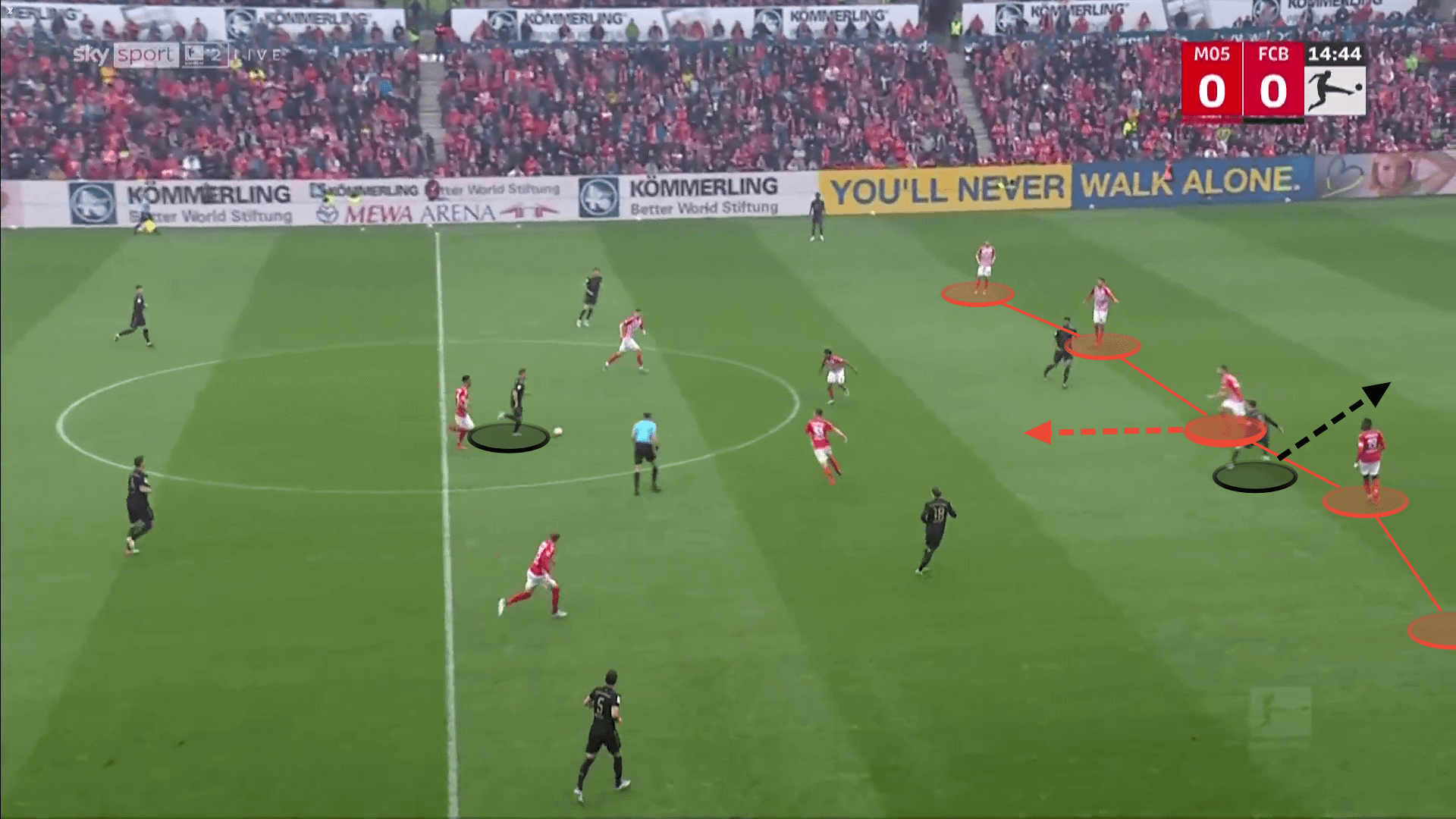 By doing some steps in front, he covers a bigger space in behind and denies a break-through of Lewandowski. Bell provides 6.43 of those interceptions per 90 minutes. 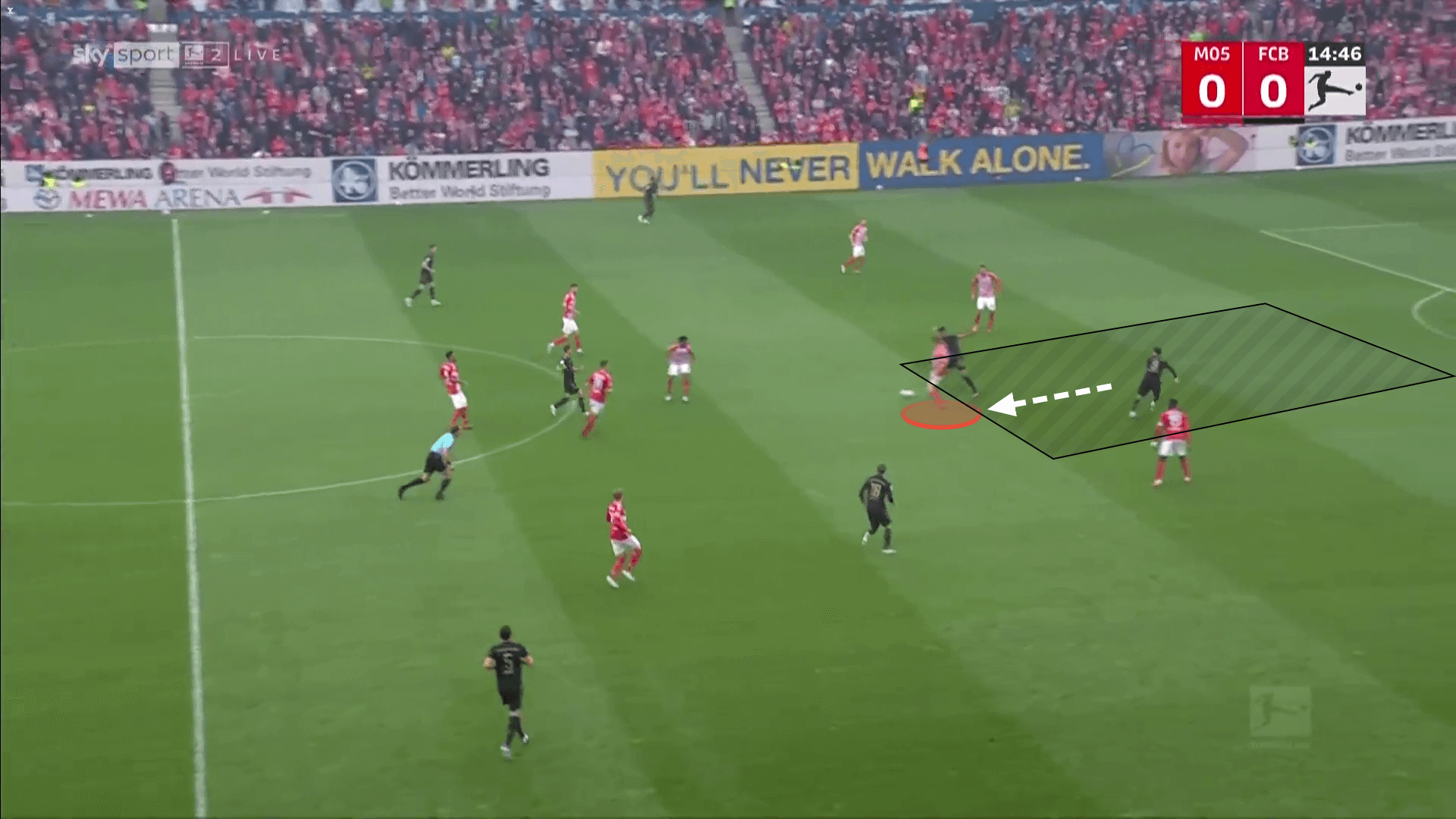 The German centre-back is not the youngest player anymore. This is made clear and you can see it in terms of acceleration and pace. However, due to his experience, he provides smart movements. Adding to that, he is an identification player since he is playing for Mainz 05 for more than 14 years. As of now, he is an important figure in Svensson’s build-up play. But as shown in this tactical analysis, his passing is one of his biggest weaknesses. Looking into the future, it might worth considering a replacement with a player who fits even better to Svensson’s playing philosophy.