West Brom have produced some good prospects over the last few years. However, somehow nobody seems to give them the credit they’re due, from pacy winger Jonathan Leko, promising box-to-box player Sam Field, to most importantly, Rekeem Harper.

Harper is arguably the best player of the three as things stand. Physically, the 18-year-old is incredibly mature, something you’d probably expect from a West Brom player. Harper has more to his game than power though. The young lad has an impressive level of technical ability and is a confident passer, something incredibly positive for a side trying to look away from old-fashioned, physical football.

In this individual player analysis, we’ll dive into what makes Rekeem Harper exciting, and what he could offer West Brom in the future.

The brave, young midfielder has a lot to his game. This all-around ability would allow him to not only improve any Championship side, but to be used tactically in any central midfield strain, from a box-to-box player all the way to a deep-lying playmaker.

If you look at that entire side, they still show that they’re all physically very impressive, as you’d expect a WBA side to be. Nevertheless, for the Championship they’ve got some really impressive players technically. Any of their players on that pitch could change any side in the second-tier massively. What’s very impressive is that Harper doesn’t look like an 18-year-old on the ball. If anything, he looks just as composed and professional as ex-Manchester City Premier League champion Gareth Barry or senior professional Chris Brunt.

In this game, he played as a box-to-box midfielder. He caused all sorts of havoc in the opening 10 minutes with his fast pace and direct central running. Something incredibly promising in a youngster, it shows that he is a confident player willing to fight hard for his place and impress his manager, Darren Moore.

The Baggies’ number 34 had the most successful dribbles completed in his side, with and incredibly promising 83.3% of take-ons completed. A young lad his size with fast feet is reminiscent of a certain ex-Spurs behemoth Moussa Dembele.

Above you can see West Brom’s average player position in their 1-1 draw vs Norwich City. Harper is WBA’s number 34. He almost has a similar role to Moussa Sissoko at Tottenham, tasked with covering the space left by his full-back. It is a role that requires excellent physical attributes.

What we see above is Harper’s heatmap against Norwich. This underlines the role he plays in the side of covering the wide men, and most importantly his right full-back.

With a pass success rate of 87%, Rekeem is statistically a proven strong player for a side that is trying to transition into shorter-passing football. At 18 years old, such composure whilst being pressed is highly impressive. His ability to cope whilst under high pressure is exciting for a young midfielder. Let’s dive in and see how he copes so well.

The youngster completes on average 35.84 passes per game, with a success ratio of 91.2%. But what allows him to be such a neat passer? In the image below, we will see how early he screens the pitch ahead of him to not only see players to pass to, but to decide how long he has on the ball before he is challenged.

As he screens the pitch multiple times before receiving the ball, the young lad is able to paint a picture faster in his head and make the right decision. This is underlined by his immaculate passing accuracy, such a high and promising statistic for an 18-year-old.

In between the lines

The ability to position yourself in between the lines as a midfielder is a fantastic trait to possess. Harper certainly is gifted with this ingredient. Take a look at the below image to see an example.

As we can see, Harper is situated neatly between Luton’s strikers and midfielders. Due to this excellent positioning, he has that extra two or three seconds to decide which pass to make. In fact he makes the perfect decision, and completes a 30-yard through-ball that splits Luton wide open. It demonstrates a fantastic trait for a player such as himself who will look to play more as a deep-lying playmaker once he gains the trust of his manager to do so.

With an incredible 83.3% dribble success ratio, England has a player in a similar mold to Moussa Dembele. Raw power, passing, and strong dribbling abilities are such a rare set of ingredients. These three components to Rekeem’s game will make him a very pricey asset once he reaches his prime. Players such as Dembele, Tanguy Ndombele and Geoffrey Kondogbia offer similar characteristics, and Harper definitely fits into this category.

As we can see above, Harper has beaten one man and is about to beat another. His use of his 6″2′ frame to shield the ball whilst beating players is fantastic. His dribbling success ratio really echoes this. If trained correctly, he could be an incredibly strong player in the art of bringing the ball out of the defense. Whilst his dribbling is excellent, he could become even more effective if he continues to receive good coaching.

I’ve described Harper as a box-to-box player, but have so far only listed his attacking excellence. In this paragraph I’ll emphasize his sheer defensive prowess, and why he is a superb box-to-box prospect. One of his strengths defensively is the ability to intercept passes in dangerous areas. Let’s have a look below.

With 3.15 interceptions per-game, he is very able to cut up opposition attacks and quickly counter-attack with his superb dribbling or passing. The image above shows his defensive intelligence. He steps in at the right time with West Brom overloaded centrally: good sense to have for such a young player.

In the transition into from defence into attack, Harper is absolutely fantastic as he has the combination of the ability to read the game, dribble past multiple players and knock the ball on to use his pace. 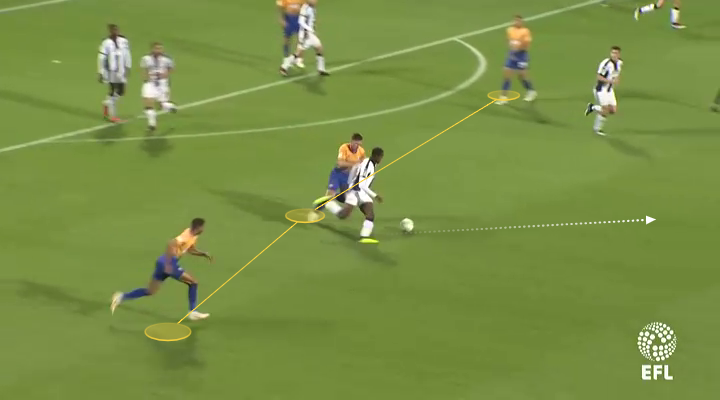 Above is Harper dismantling an attack on his own goal, and then quickly beating the press with his quick feet to launch a counter-attack. This is something that made Moussa Dembele so individually excellent at Spurs, and why he was so highly rated.

Harper is showing the signs that indicate that he will be a similarly rare player. It isn’t hard to imagine a top Premier League club putting in a massive bid for him in two to three years’ time, as he possesses such unique and powerful ingredients that will make him an incredible midfielder.

This is an excellent sign for the Championship, and English football alike. A player of his nature and quality is so rare, especially if they realise their potential. Let’s just hope Harper keeps his head down and achieves this.

To put it simply, Rekeem Harper is such an exciting player. We are looking at a player with some really rare traits and ingredients. Harper may still be a young man of 18, but he is showcasing himself to be a very good player in the Championship already. To add some context, Harry Kane was on loan to League One Leyton Orient at this age, and hardly setting the world alight.

Ability at a young age does not define a player’s overall potential, but the prospects are thrilling for Harper. His development goes to show there is plenty of talent outside Premier League youth sides. With Brexit coming up we may see tighter regulations on the number of foreign players, so it would make sense for the big clubs to try to get players such as Rekeem Harper in their ranks before its too late. Their prices are are likely to become massively inflated.

One hopes that Harper continues to improve at his current rate, because if he does we will have a great player on our hands for the national team.