Igor Tudor will be thrilled with his start to life in France as his Marseille team has enjoyed their best-ever start in France’s top flight. The Olympians remain unbeaten in the league and at this present moment are keeping pace with PSG, sitting only two points behind them in second place.

A key player during this start has been Arsenal loanee, Nuno Tavares. The young Portuguese full-back has started the season in fine form and his performances have been crucial to the style of play that Tudor has implemented at the Stade Vélodrome.

The former Benfica man has been recognised as the club’s best player this month and has been named Marseille’s Player of the Month for August.

In this scout report, we will provide a tactical analysis of Tavares’s style of play. We will look at how he fits into Igor Tudor’s tactics at Marseille and how he has become a fundamental aspect of his manager’s tactical approach. We will provide an analysis of the key areas that have prospered in his games so far this season and we will compare his statistical output against the other players that play in his position in Ligue 1.

Nuno Tavares spent his youth years at Casa Pi and Sporting Lisbon before completing his development at the famous Benfica Campus formerly known as Caixa Futebol Campus. He left Benfica to move to his current parent club Arsenal in 2021 and has been capped by Portugal at U18, U19 and U21 levels.

In his last season at Benfica the 2020/21 season, Tavares made forty-one senior appearances in all competitions, scoring once and completing seven assists. This is what prompted Arsenal to pay seven million pounds for him in the summer of 2021.

He stands at 6’0” and holds a lean build, weighs 75kgs and is physically strong with excellent pace and athletic ability, which is ideal for a modern-day full-back.

Tavares is a left full-back who shows versatility by being able to play as a right-back. Since joining Marseille in the summer Igor Tudor has used Tavares as the left wing-back in his 3-4-3 formation. The heat map below shows the areas of Tavares’s actions as a left-wing-back this season in Ligue 1. 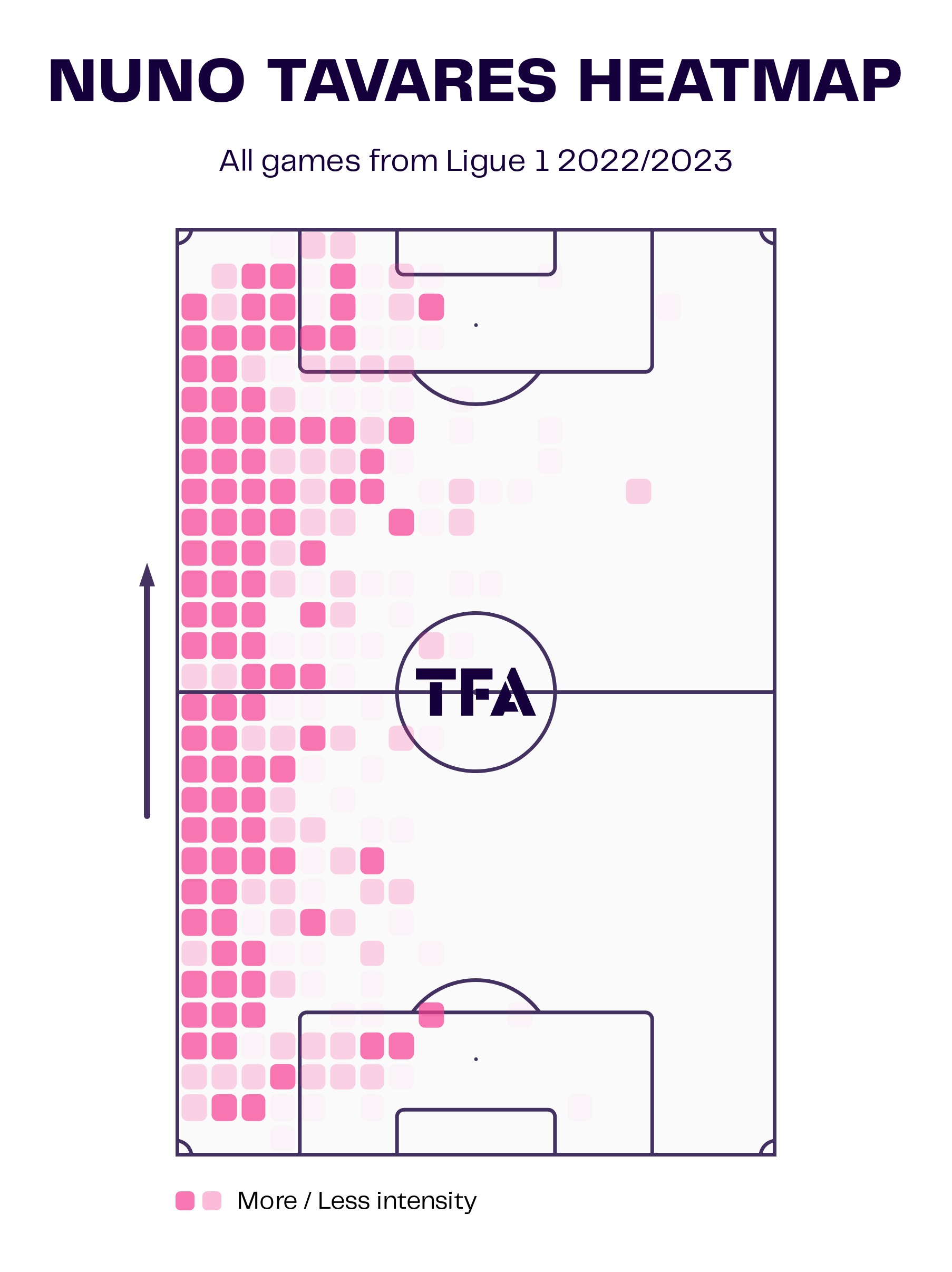 You can see how his role within Tudor’s tactics is not just about providing width down the left-hand side, as he provides actions in the left channel, the left half-space and he affects the play in both Marseille’s defensive and attacking thirds.

When Marseille hold possession, the 3-4-3 transitions to a 3-2-5 formation, therefore Tavares’s role changes from a left-wing back to a left-sided forward player as he joins the front five. 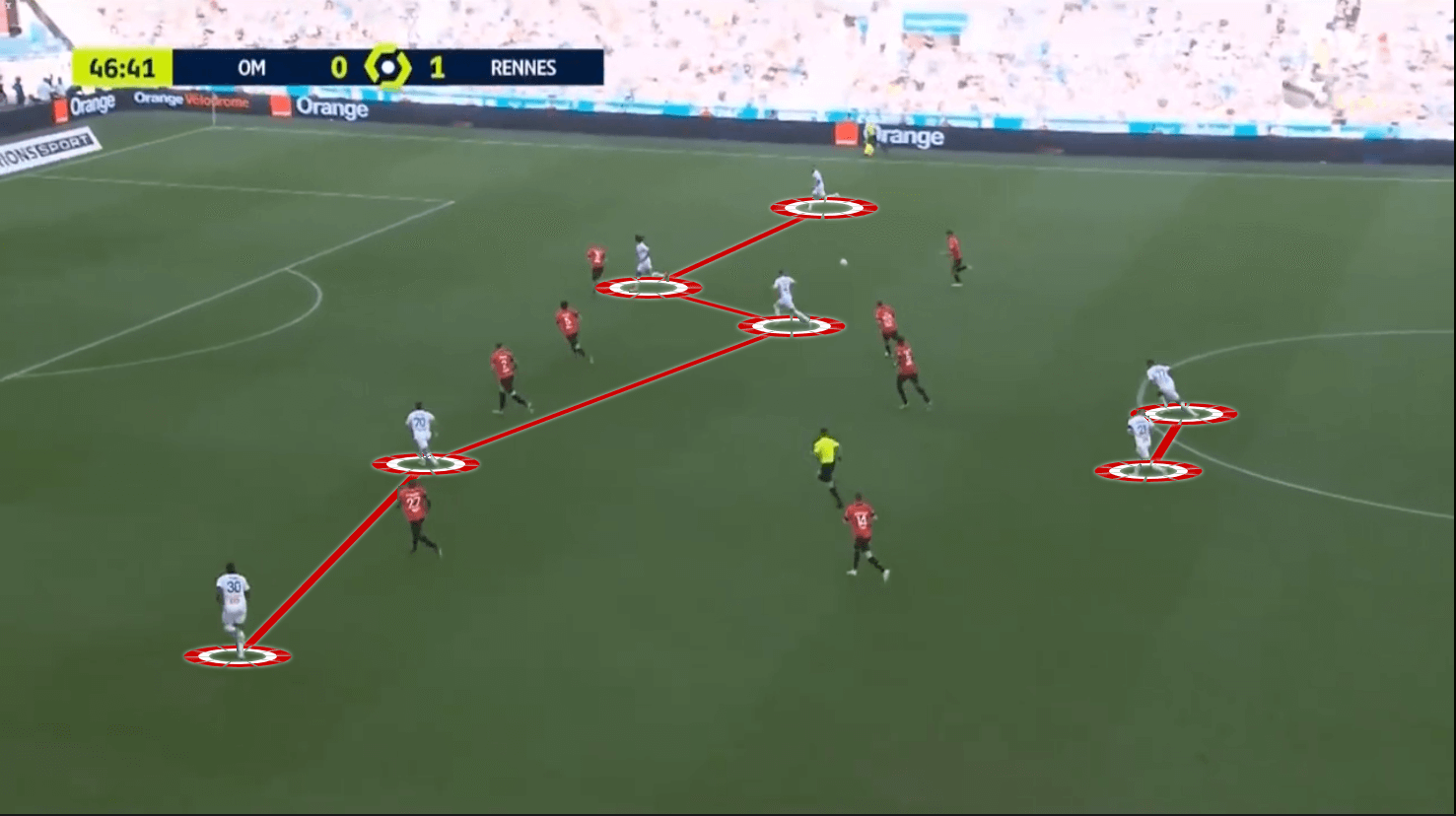 The wing backs play a pivotal role when the 3-4-3 formation switches to a 3-2-5 because when they join the attacking line to make it a five, it enables Marseille to open the wide areas. So, when teams try to sit in a narrow and compact defensive shape, it stretches the defence, creating space to exploit in the process. It also stops them from being at a numerical disadvantage if the opposition plays a back five.

Defensively, his position changes from a wing-back to a full-back as the tactics that Tudor has deployed so far this campaign have seen Marseille switching from 3-4-3 to 5-4-1 or 5-2-3 when playing against the ball. 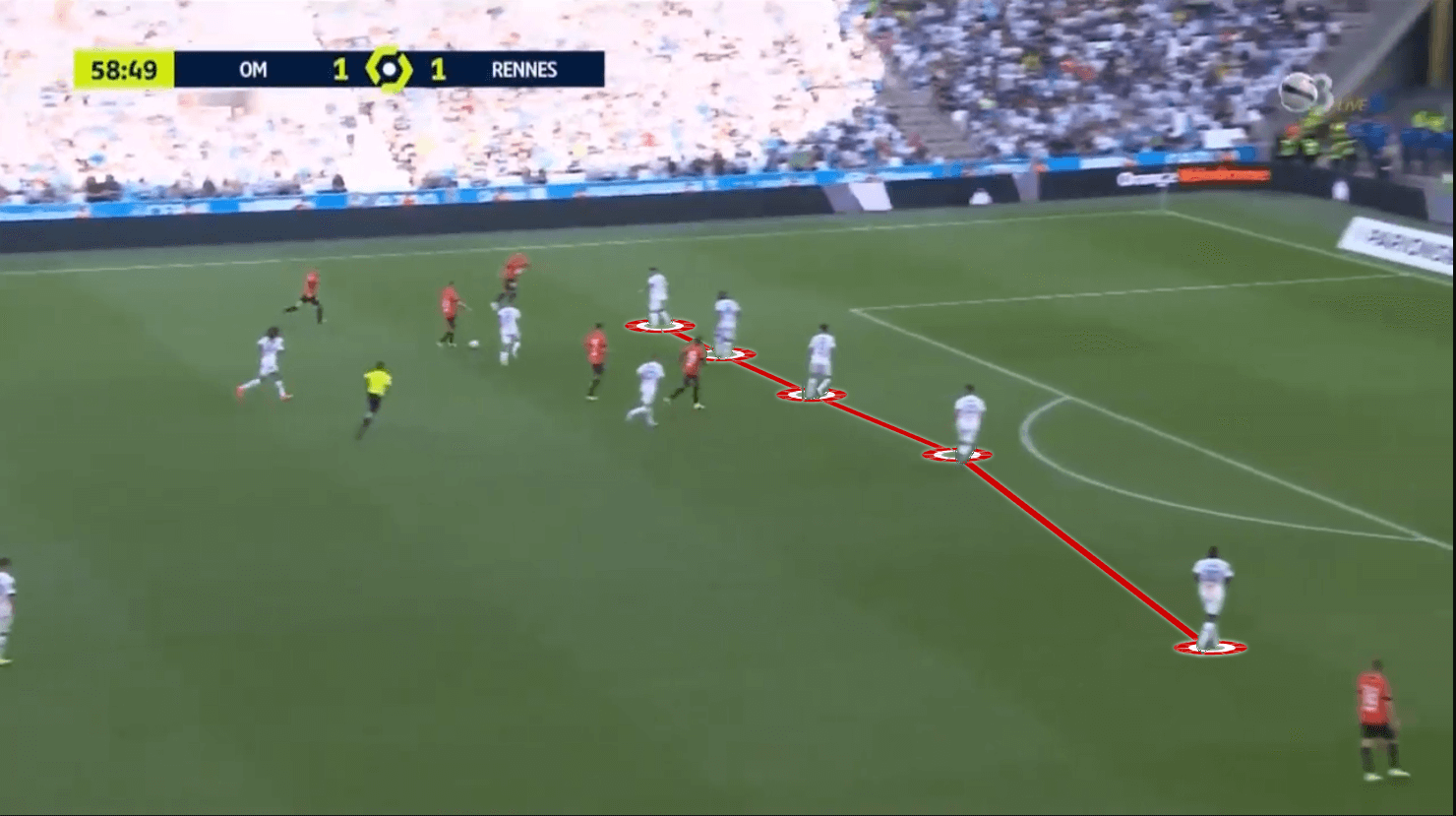 Tavares has been having had a positive influence in this position for Marseille this season. He has played a significant role in making Tudors 3-4-3 work. He assists the teams in the transition to attack with speed and ball-carrying ability with his speed enabling him to recover during the team’s transition to defence.

It is through the attacking phase that Nuno Tavares has excelled this season. He has scored 3 goals within the eight appearances he has made and averages 2.29 shots per 90 minutes. Along with averaging 2.96 touches per minute in the opposition’s penalty area, you can see how much of an impact he is having on Marseille’s play during their attack. 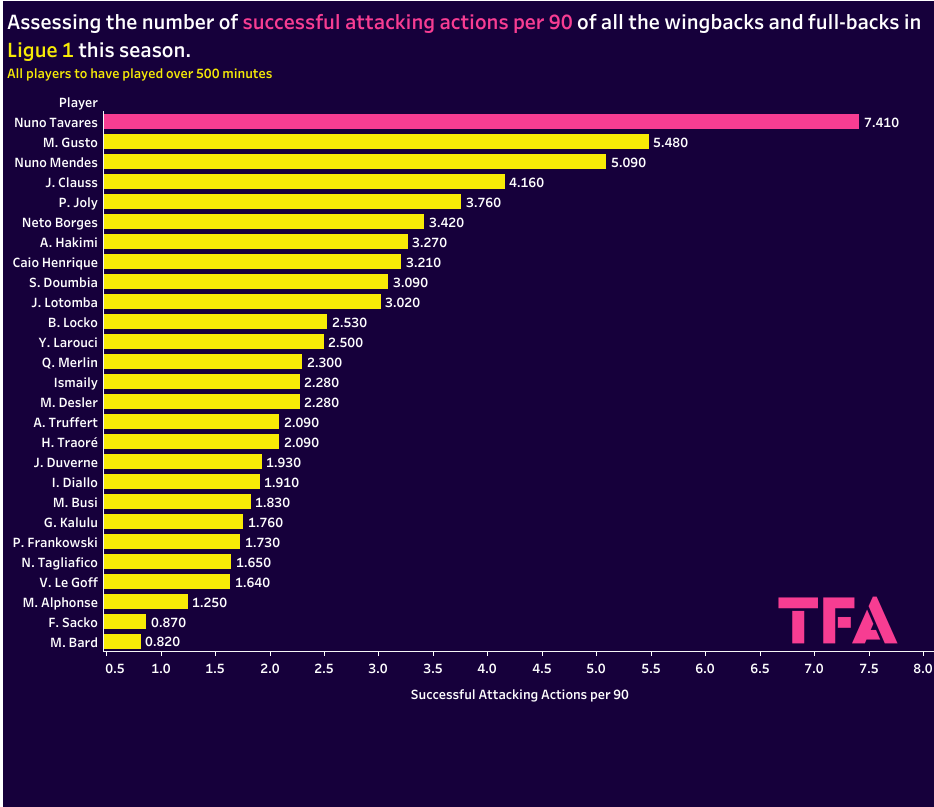 You can see in this image how Taveras mas moved in centrally to join Alexis Sanchez to form a front two. 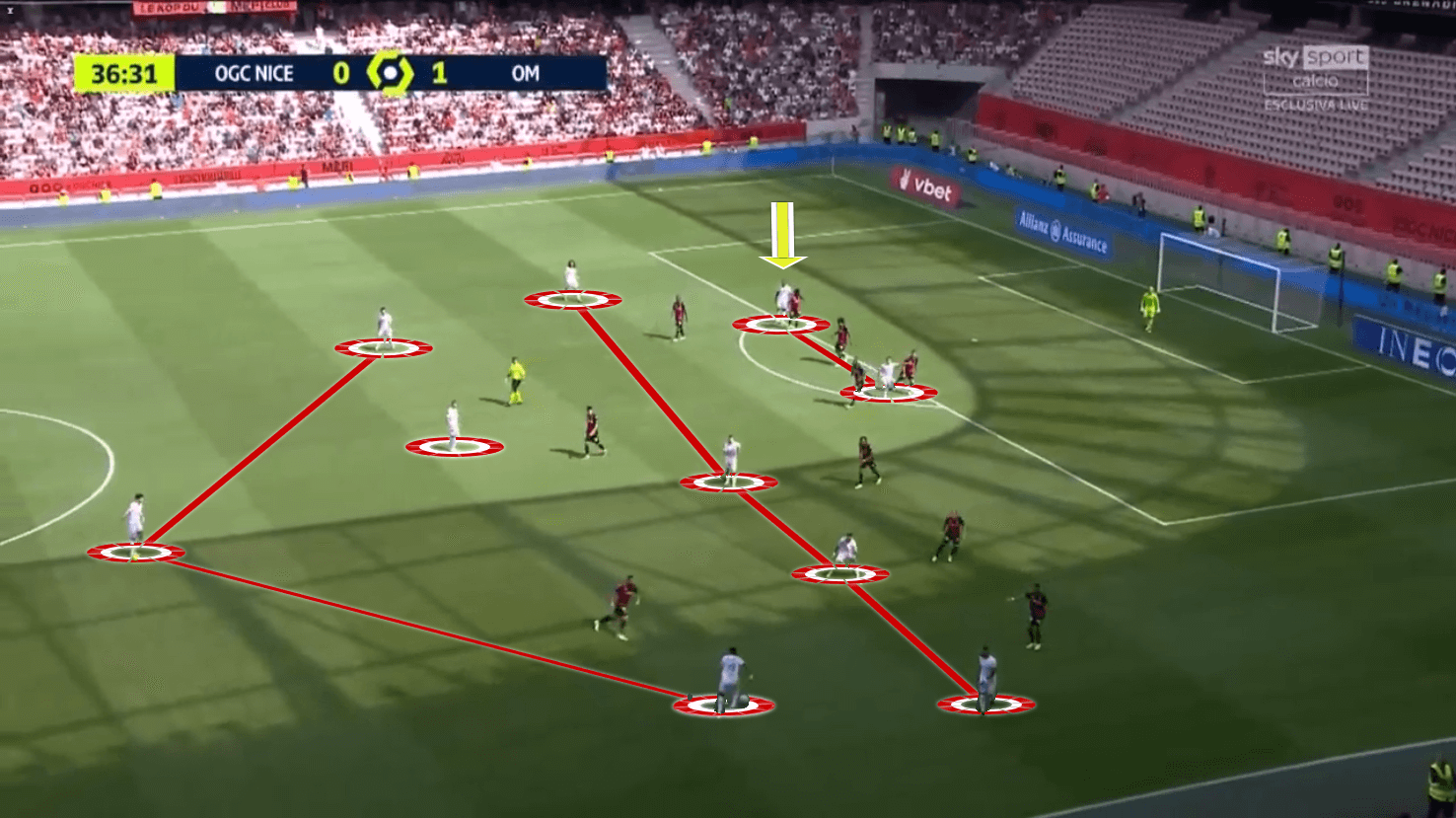 As he did at Hellas Verona, Tudor relies heavily on his wingbacks during the team’s attacking stage. They are given the freedom to roam, and Tavares has been a beneficiary of this approach. The young Portuguese star is a two-footed play so he can come inside onto his right foot and make an impact just as much as he can when playing on the outside.

When he plays on the outside, he likes to play on the shoulder and attack the space behind the opponent’s defence. This suits Marseille’s style of play, as they play like to play with verticality in possession and to progress the ball forward. The next example shows this.

You can see how Reims have blocked the passing lanes for Marseille to be able able to progress through the centre as they are marking man to man. As Tavares has pushed high and wide during the build-up, Marseille can go directly behind Reims’ defence for Tavares to attack. 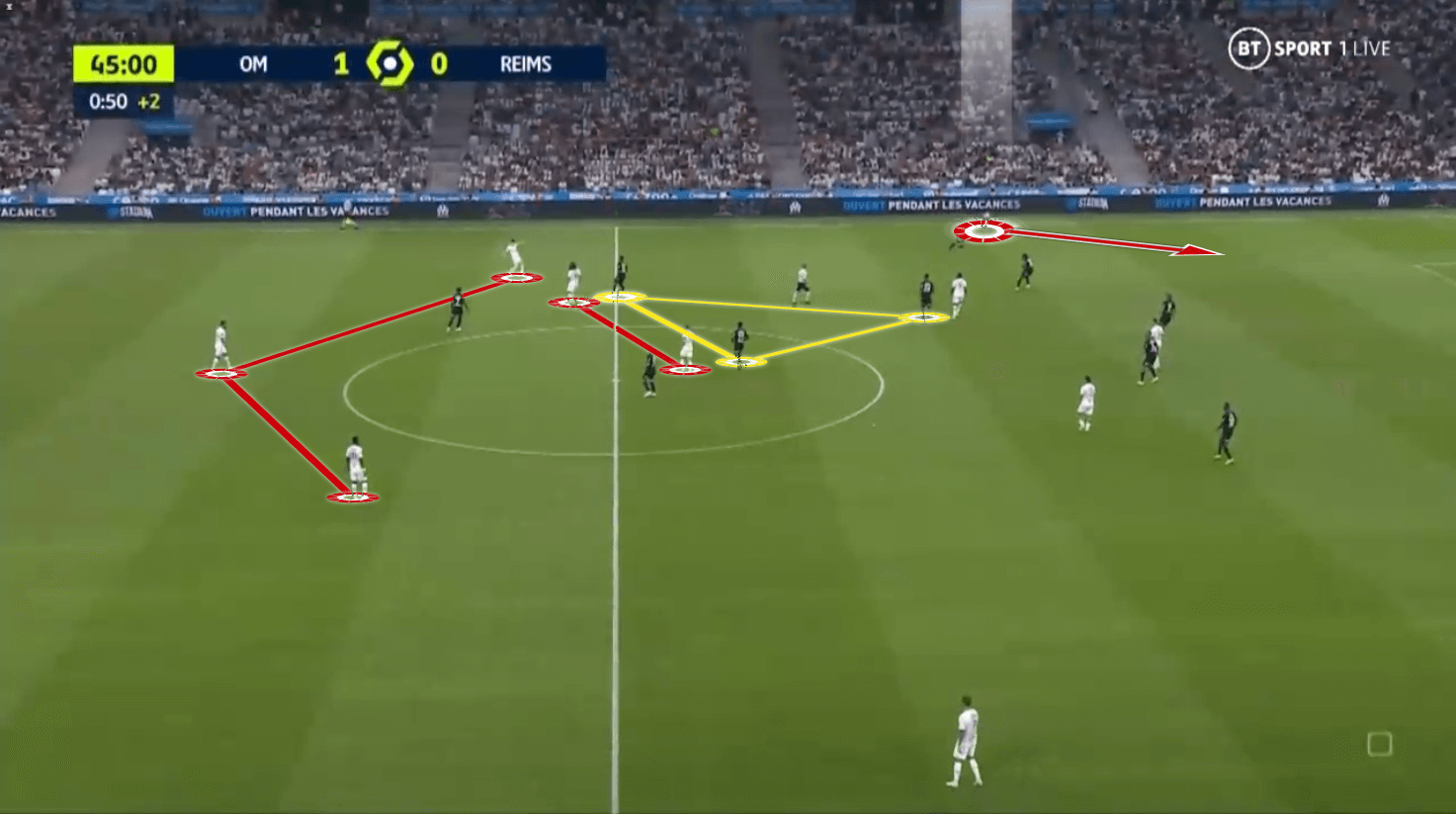 Tavares’s ability to run with the ball and dribble is proving to be a key factor in Marseille’s attack. His pace disrupts the opponent’s defence as it allows Marseille to be quick in transition and he is particularly good at getting the team up the pitch. 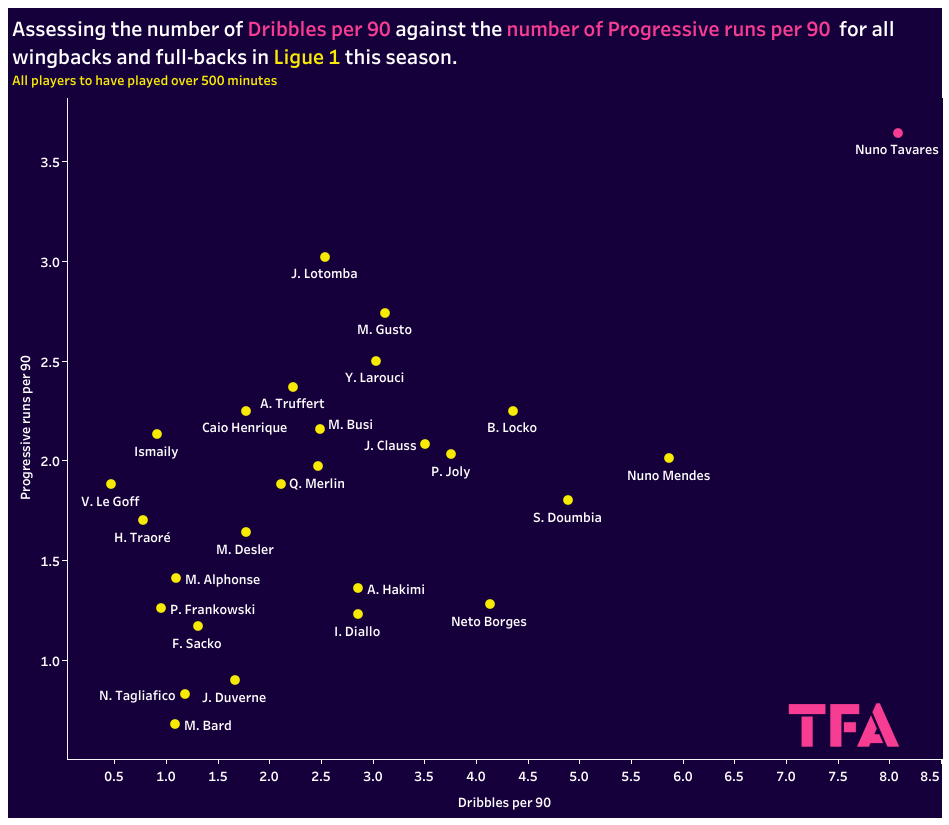 When compared to other wingbacks and fullbacks in Ligue 1, the data analysis provided shows how well Tavares started the season in this area. Igor Tudor’s tactical approach requires his team to use full coverage of the pitch, attack through both the centre and from out wide and attack quickly when the opportunity arrives.

We have provided two images that show the impact it has on Marseille’s attack when Tavares dribbles or progresses with the ball, and its shows the issue it has on Lille’s defensive shape.

The first image shows Lille’s defensive line. This is a common shape, as Marseille are building down the left-hand had to side it is normal for Lille’s right back to put pressure on the ball. 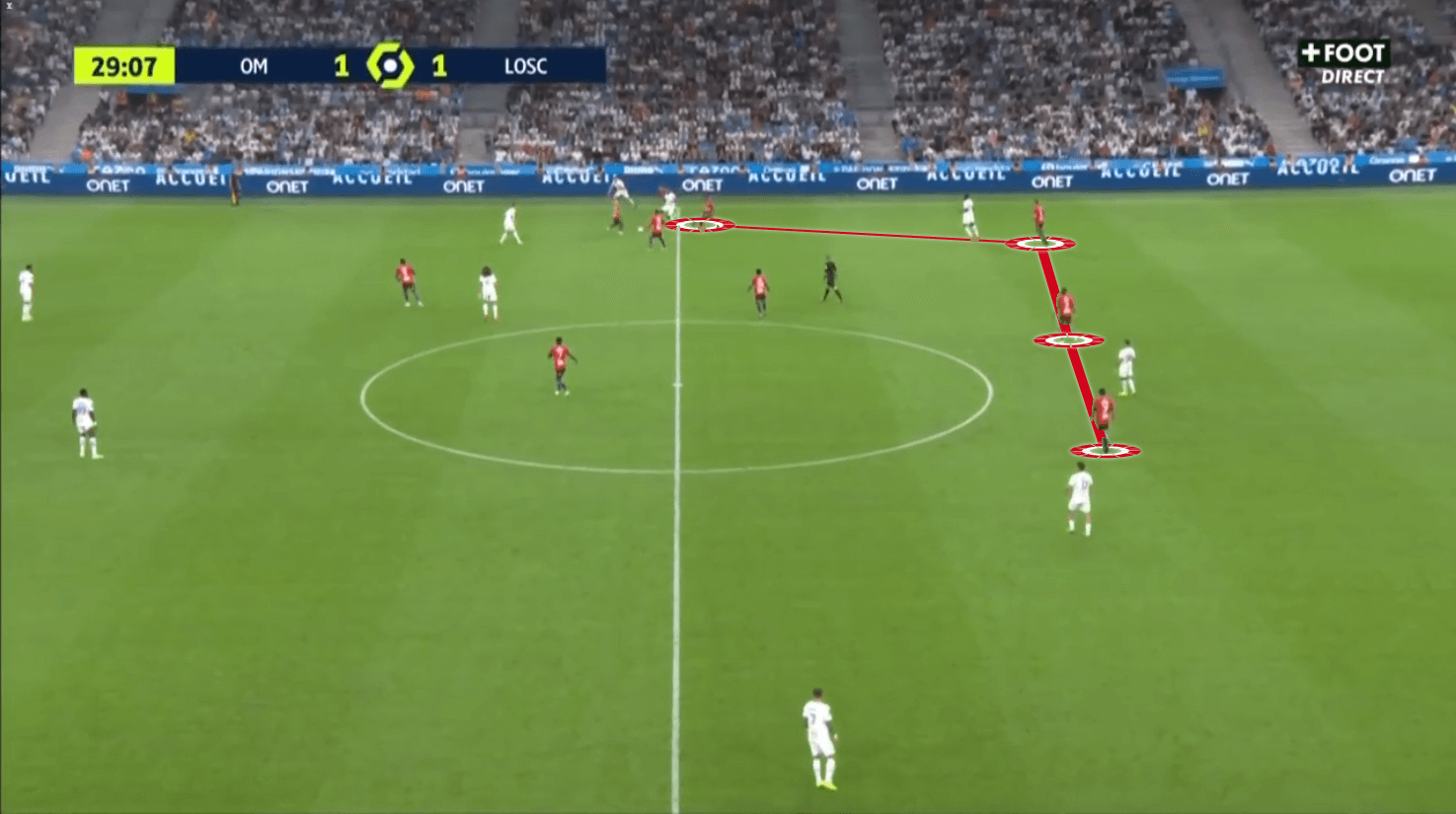 As Nuno Tavares beats Lille’s counterpress out wide the situation turns into the image below as he progresses and attacks with the ball. You can see immediately how by beating the full-back and attacking the space with the ball how disjointed Lille’s defence becomes and how it opens different options for his next pass. 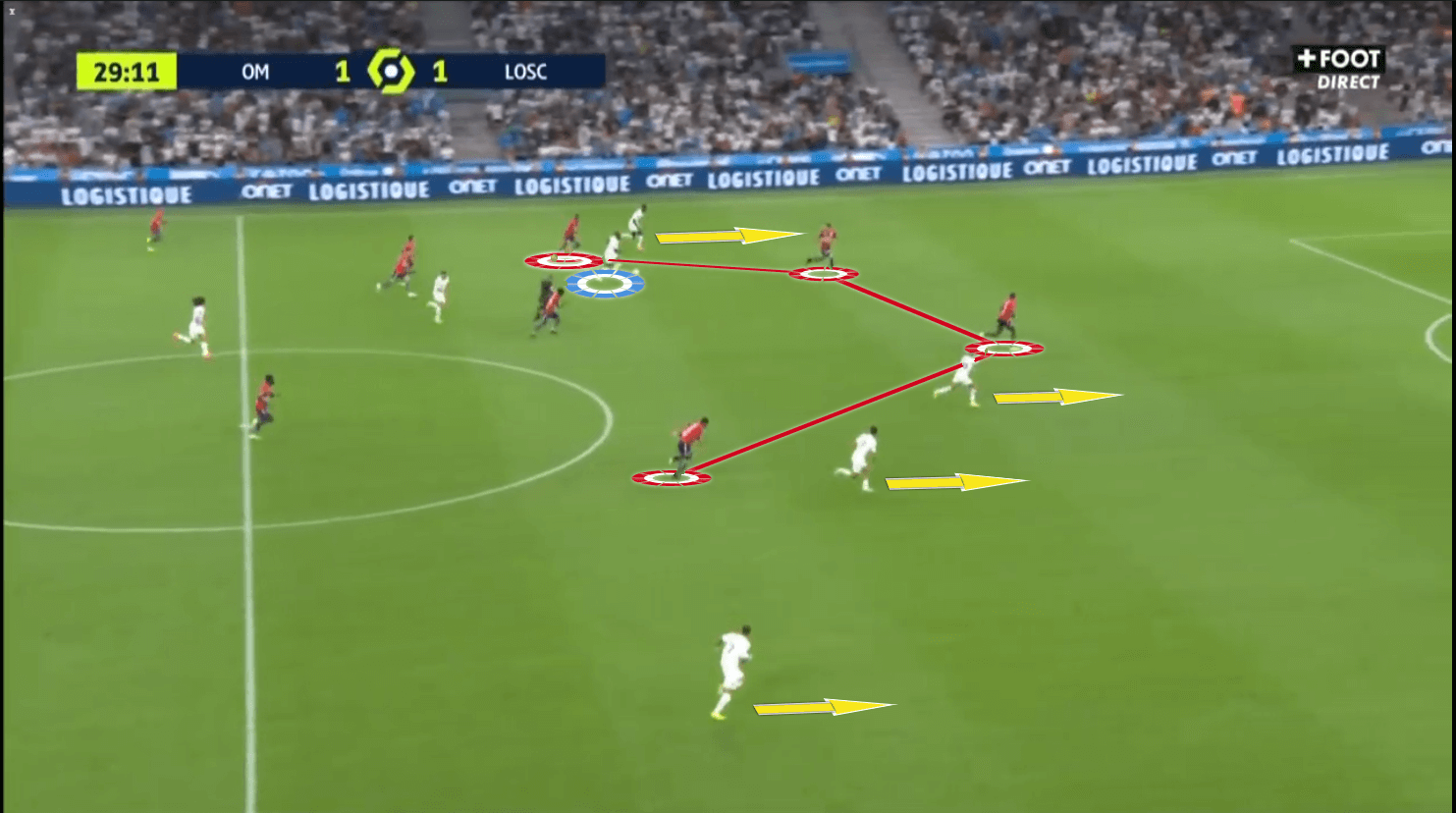 Igor Tudor’s tactical principles for when his teams are out of possession have been applied immediately since joining Marseille. They defend high up the pitch with a man-orientated pressing system. The team will position themselves as close as possible, making sure there is limited space between each positional line.

Les Olympiens are aggressive in their pursuit of the ball and the wingbacks play an active role in this approach. Tudor likes his wingbacks to push high and press through the wide areas as soon as the opponents start to build up and Tavares’s physicality makes him suited to these tactics.

As Clermont start building up in the example below you can see how Nuno Tavares immediately looks to press the ball carrier.  Even though Clermont is still in the first phase of the build-up, Tavares still looks to win the ball as he joins the first line of pressure. 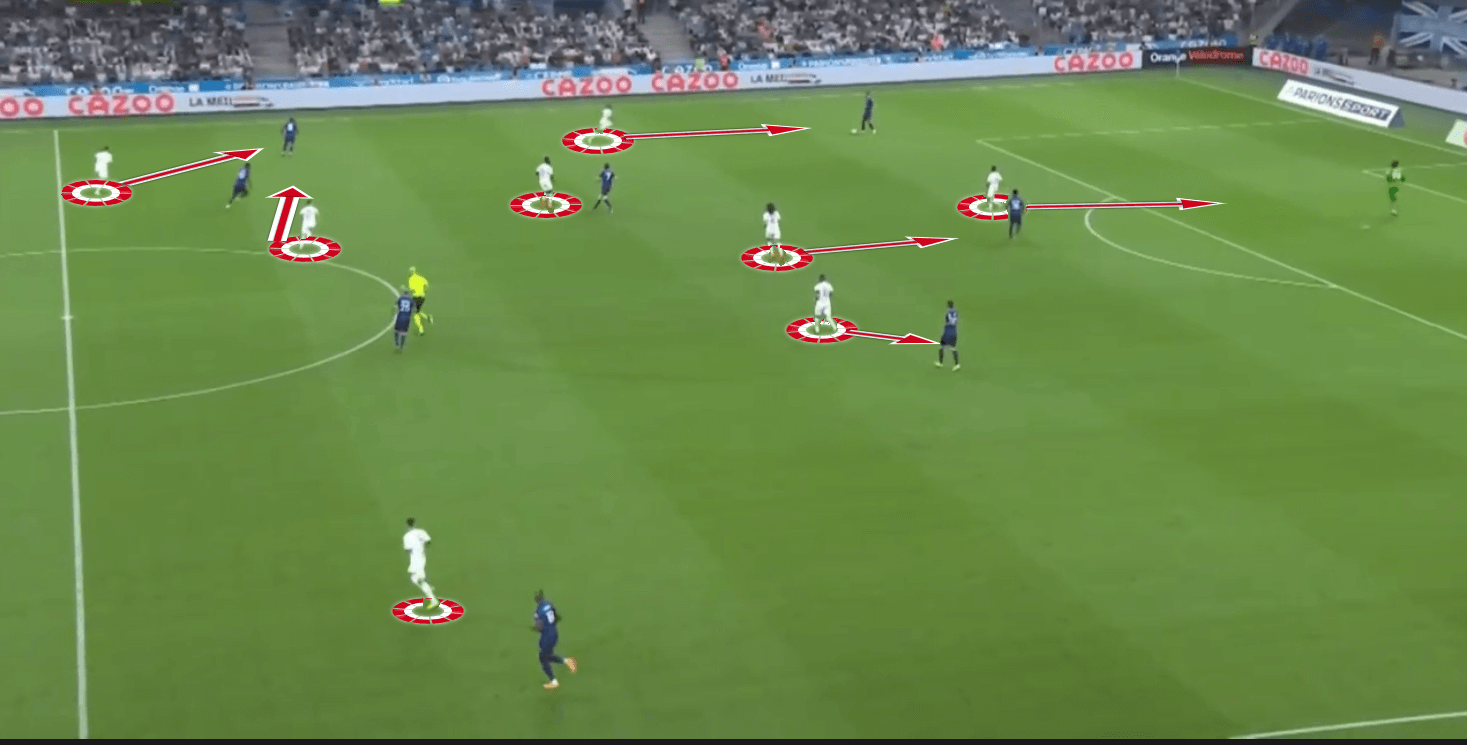 This is because Marseille want to win the ball back as quickly as possible, the higher up the pitch the better. It allows the centre forward to remain central and stop the pass back to the goalkeeper but also, if he wasn’t quick enough to put pressure on the ball, it would allow Clermont with a better opportunity of playing through the lines and leave Marseille vulnerable to a switch of play as they all proceed to towards the ball.

Under Tudor, constant pressure is applied, especially in wide areas. Tavares is physically competent. He has not sustained an injury that has kept him out of any matches for two seasons. 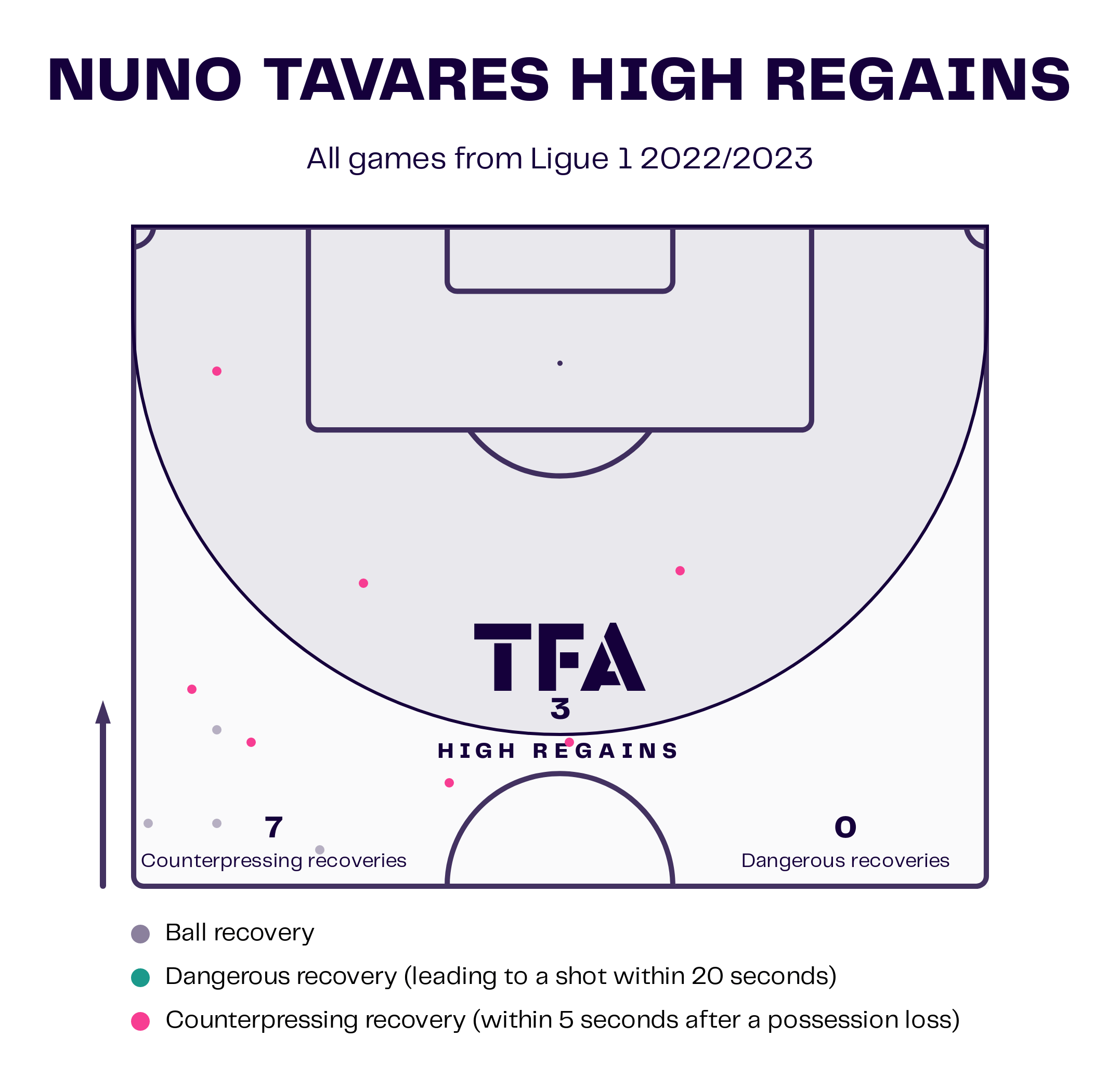 None of Nuno Tavares’s defensive data ranks amongst the highest when measured against the other fullbacks and wingbacks in Ligue 1 this season. However, it must be noted that Marseille have averaged the second highest amount of possession in the league and therefore will defend less than the other teams

There have been some vulnerabilities within his defensive game that come from lapses in concentration and from the risks taken within the tactical approach of how Igor Tudor wants to play when they attack, and how he wants them to play when they try to recover the ball.

We have noticed that Tavares’s vulnerabilities show when pressing to win the ball in 1v1 situations and he does not show awareness of his surrounding area and his general position towards the ball. The next two examples identify the two concerns we have.

This example shows Tavares pressing Frankfurt’s player immediately but failing to win the ball and failing in his 1v1 which allows him to progress further and exploit the space left behind Tavares. He needs to be aware of the space behind him as he puts pressure on the ball. Instead of trying the win the ball as soon as he engages, he needs to show Frankfurt’s player inside which would stop him from being to progress the play immediately and protect the space he has vacated by not allowing Frankfurt to play towards that area. 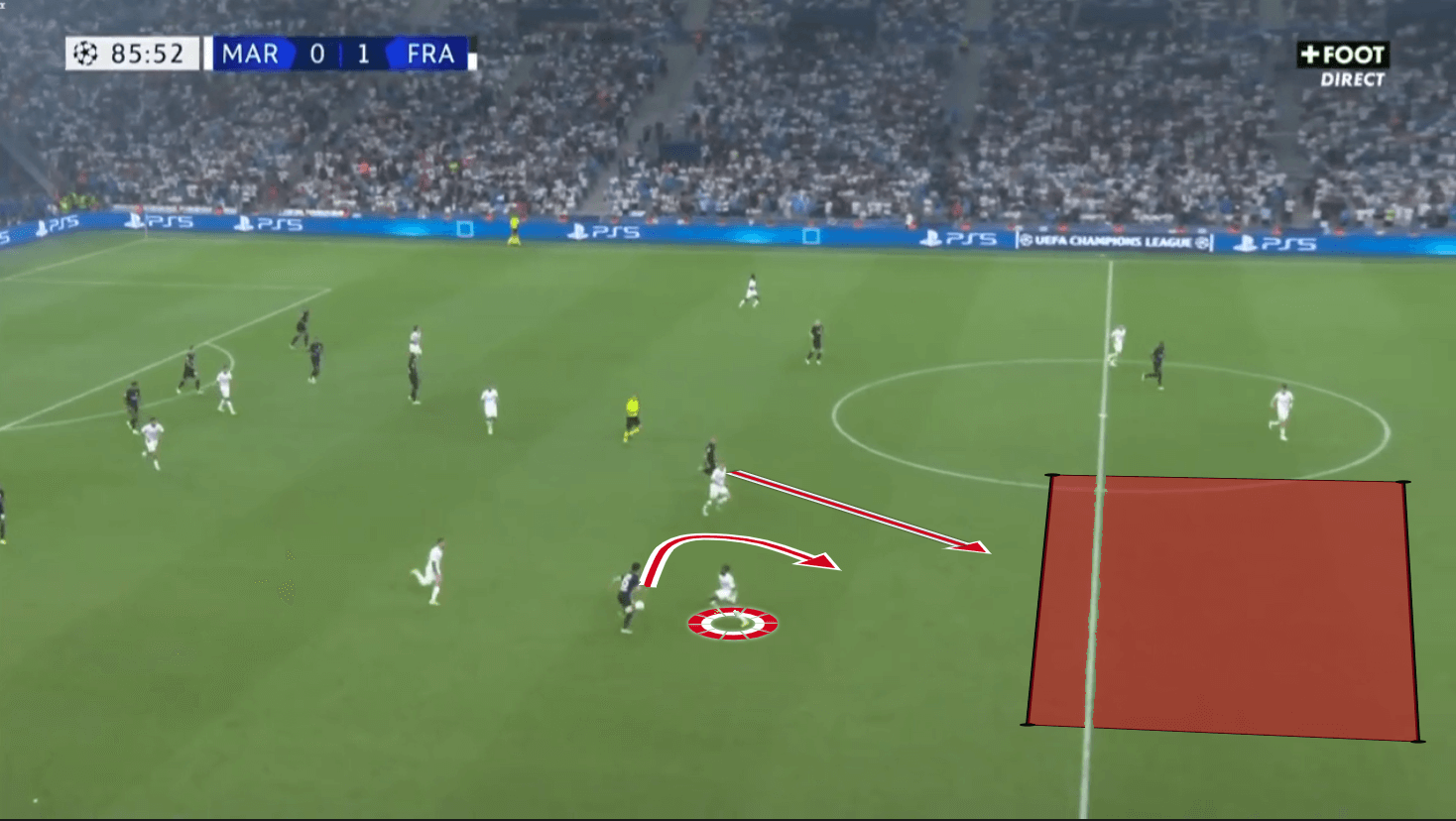 Against Rennes, their goalkeeper decides the play directly to the right full-back from his goal kick. At this point, Tavares has already committed to pressing him immediately, by doing this he is providing Rennes’ right back with two passing options. He then plays the ball inside to the midfielder who is free and then he plays a first-time ball to the winger, who progresses further into the Marseille half. 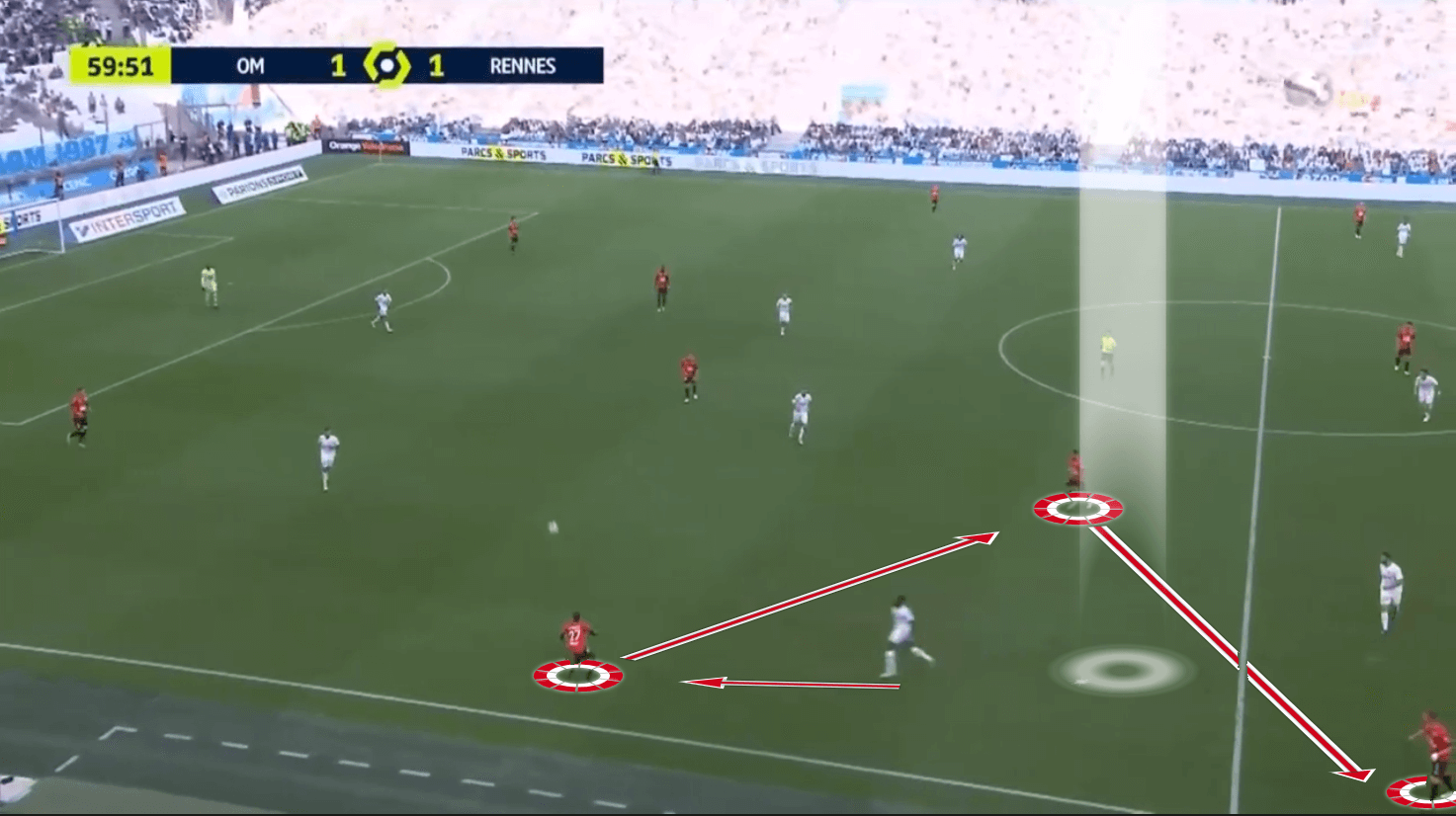 What the former Benfica player should do is hold his position in the area marked and when Rennes’ right-back takes his first touch and then starts to press, this way he can limit Rennes’ options as he can press from an angle which would block the extra passing lane off.

Moving to Marseille has been a very productive loan move for Nuno Tavares. Igor Tudor’s tactics allow him to be more influential than he was at Arsenal and the vertical-based approach used at Marseille is better suited to Tavares than the positional play approach used by Mikel Arteta at the Emirates.

There are still elements to his game he still needs to work on for him to improve defensively, especially for him to go back to playing as a fullback in a back four.

This tactical analysis has shown what a vital role Nuno Tavares has played so far for Marseille. Having previously been used as a fullback, his transition to wing-back has allowed him to demonstrate and impact games further up the pitch, bringing more consistency to his attacking game. 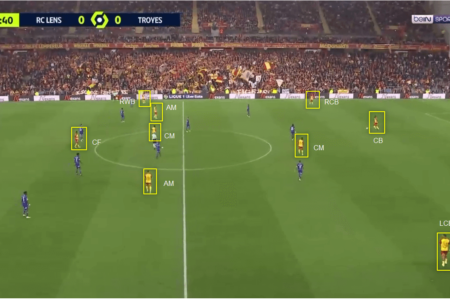 After losing three key players in the summer, finishing in seventh place for the second year running and missing out […] 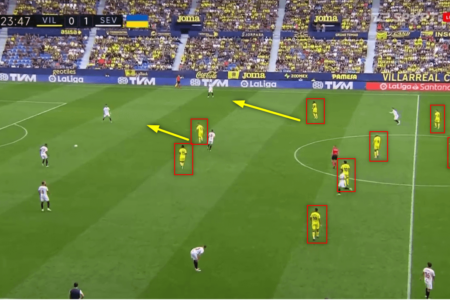