At the Genesis of their Bundesliga campaign, Wolfsburg have begun with an excellent defensive record. A 20-year-old, fresh from Sochaux in Ligue 2 this summer, has been at the forefront of this admirable defensive effort. Oliver Glasner has coached his side into conceding just four goals in five games so far this season, the second-best in the league.

Die Wölfe have a handful of youthful first-team members who are at least playing at a decent Bundesliga level right now, and some of them have the potential to play at a much higher level. Xaver Schlager, Josip Brekalo, and Maxence Lacroix, the focus of this piece, are all such players who are performing at a good level currently, with plenty of room for growth. In this analysis, we will distinguish what makes Lacroix in particular such an exciting prospect.

Lacroix has several strong attributes, including his intelligence of knowing when to step out of the defensive line or not, putting pressure onto attackers and forcing them to face away from goal, and his calmness in possession. Standing at a well built 6’3”, Lacroix possesses a good leap which is supplemented by his strong positioning. This scout report will reveal his style of play and how he fits into Glasner’s tactics this season.

In this tactical analysis, we will cover his main attributes, his role in and out of possession, and how high of a ceiling the young Frenchman has.

When analysing Lacroix’s style of play, we will focus on three key sides of his game. These combine to offer an insight into the kind of player that Lacroix is and what he could grow to become in the future. Still only 20 years old, in this stage of his career, it is worth pointing out which features of his game are strong, and which are weaker, to discover how he will aid his side in winning matches.

Now, what are Lacroix’s key strengths and what is his playing style? He is a strong player with good technique on the ball, great defensive positioning, and intelligent body angling to receive a pass. His first touch is decent and prefers to pass mainly with his stronger right foot, from which he displays a great range of passing, though his decision making in this regard has room to improve. He is very traditional in the sense of putting his body on the line, as he is constantly seen diving in front of shots to prevent them.

Lacroix is a right-footed centre-back who played as part of a four-at-the-back system at Wolfsburg, capable of playing in a deep defensive block and a high line. The 20-year-old has spent much of his playing time in the right half-space, but his clever defensive positioning means he is adept at defending wide spaces too. When he picks up the ball in these areas, he is all about finding a forward with an attempted long ball, but sometimes the execution on these attempts is what lets him down. He has found a good balance with John Brooks, his defensive partner, who typically stays back to cover Lacroix stepping out of the defensive line. 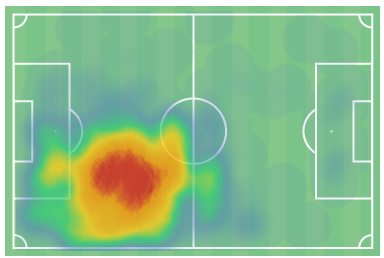 Lacroix’s heatmap from the 2020/21 Bundesliga season.

Under former LASK Linz coach Glasner, Wolfsburg like to press with intensity and win the ball back as quickly as possible. This is one clear tactical ideal we have seen Glasner instil into his players as they currently lead the Bundesliga in successful pressures at 393.

This is not, however, a constant press all over the field, as the Austrian coach has clearly set out pressing triggers which his side follow. Whenever an opposition midfielder attempts to break the lines by carrying the ball, Glasner will instruct two midfielders to follow the player, while using one of his centre-backs to engage the midfielder higher than would be expected. This is where Lacroix comes into the fold. 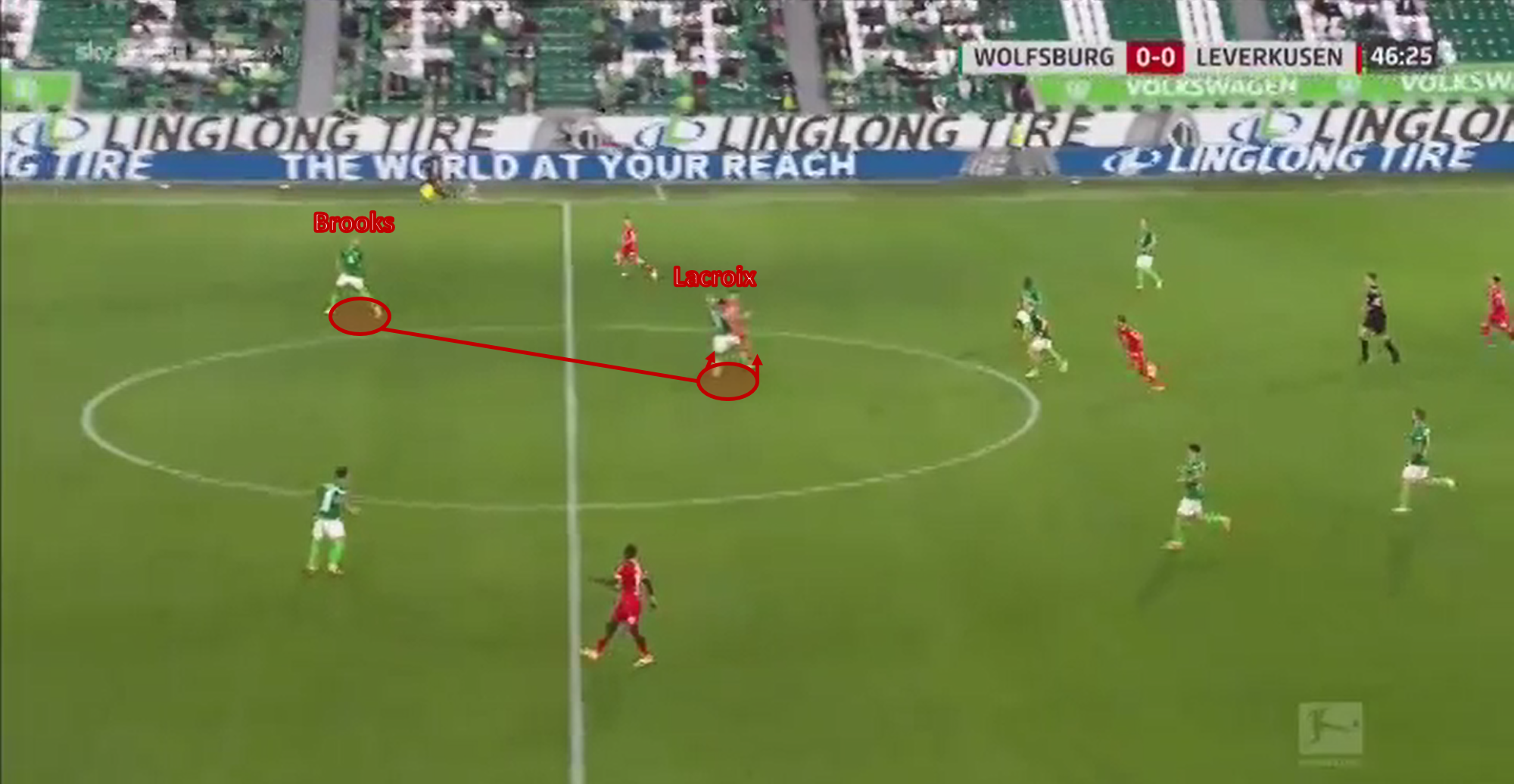 While Brooks stays behind to cover, Lacroix presses his man to recover the ball and prevent the counterattack.

As with any pressing action, this comes with a certain amount of risk. While Lacroix is usually measured in these efforts and not too reckless, his success in this regard is much less than his defensive partner. Brooks is successful in a solid 44.3% of his pressures, while Lacroix’s success rate is sat at a middling 30.3%.

This partly indicates tactical responsibility, as Lacroix has also attempted more pressures, but it also shows us the 20-year-olds room for improvement. When he is beaten initially, however, he does have great recovery pace to regain possession. 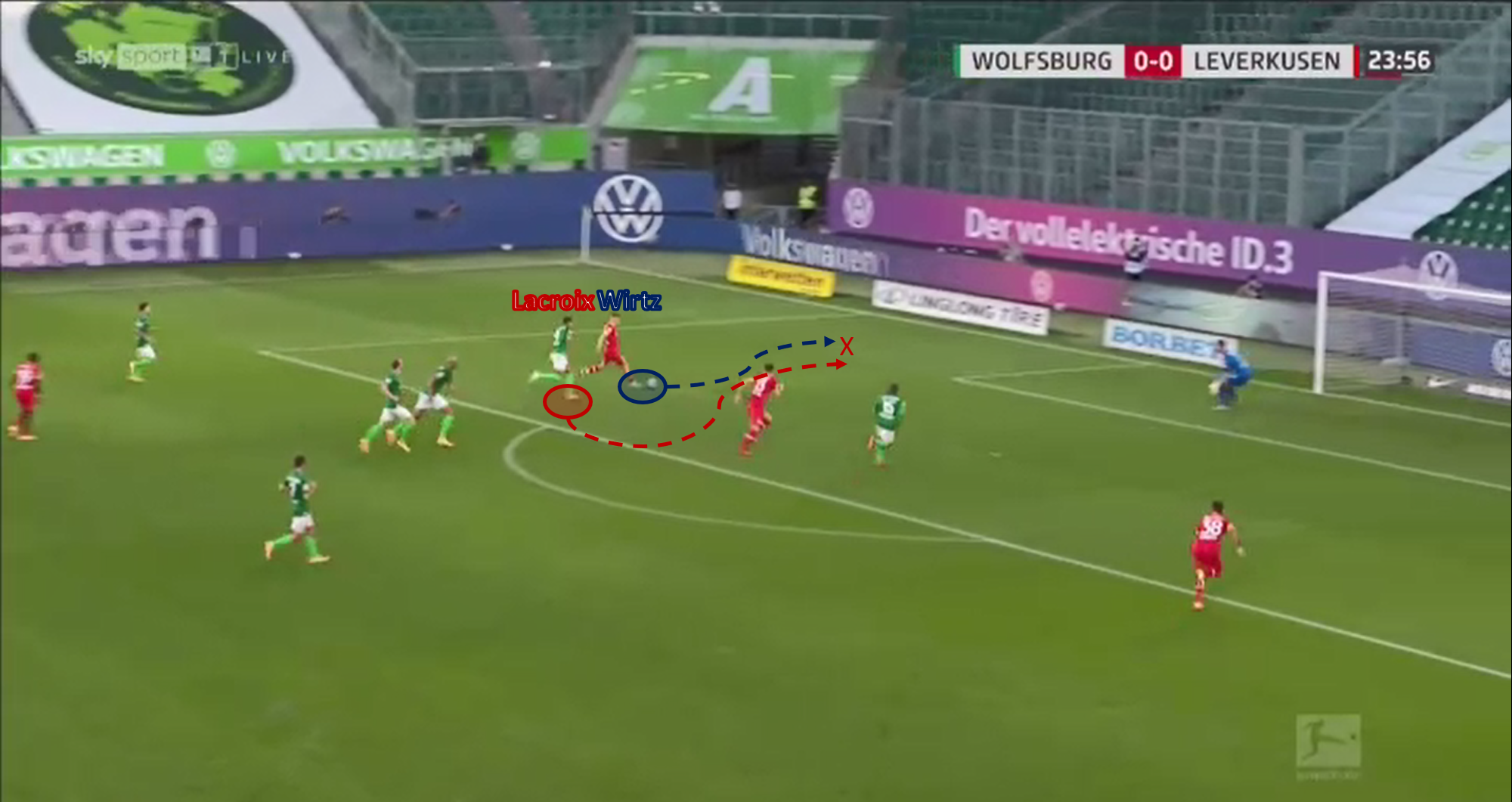 In this scenario, Lacroix was beaten by a routine one-two between Florian Wirtz and former PSG forward Moussa Diaby, but from here he manages to race back and intercept Wirtz’s incumbent delivery.

Although he is not the quickest defender you will ever see, his long strides are enough to gallop back catch up with the majority of attackers he faces. As stated earlier, Glasner likes his defenders to be cautious in their pressing approach, only pressing when certain tactical triggers are met. The bulk of Lacroix’s time is spent judging the space between him and his opponent, then positioning himself in spaces to block off passing lanes. 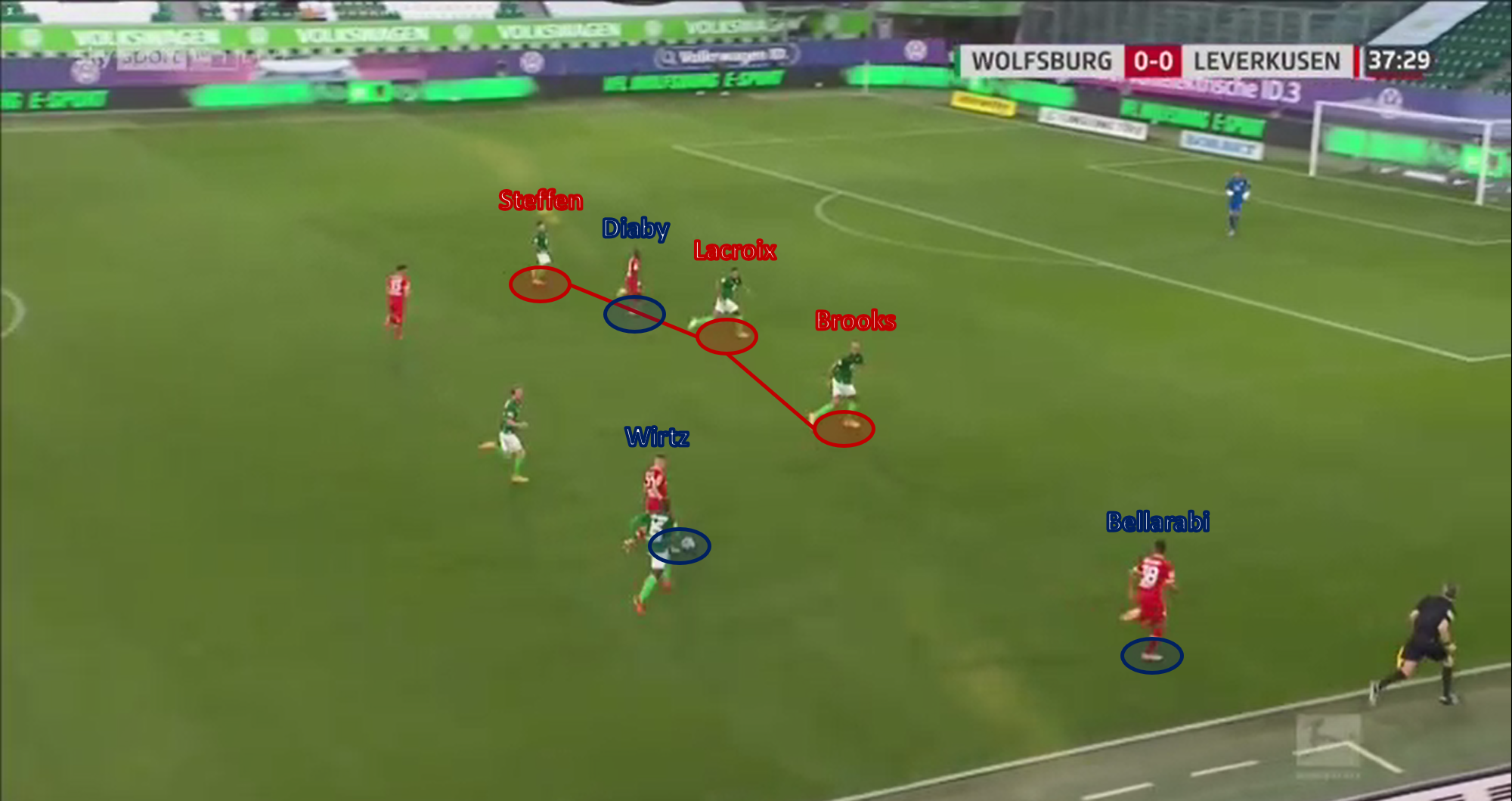 Above, we can see Lacroix’s positioning in a counterattacking scenario, keeping pace and staying close to Diaby.

Thankfully, Lacroix has a pressing machine in front of him in the form of Xaver Schlager, who succeeds with 7.87 pressures per 90, a truly impressive figure, which helps to protect Wolfsburg’s backline. This layer of dependency that Schlager provides means that Lacroix remains calm and composed whenever the opponent’s do breach the midfield line of pressure. 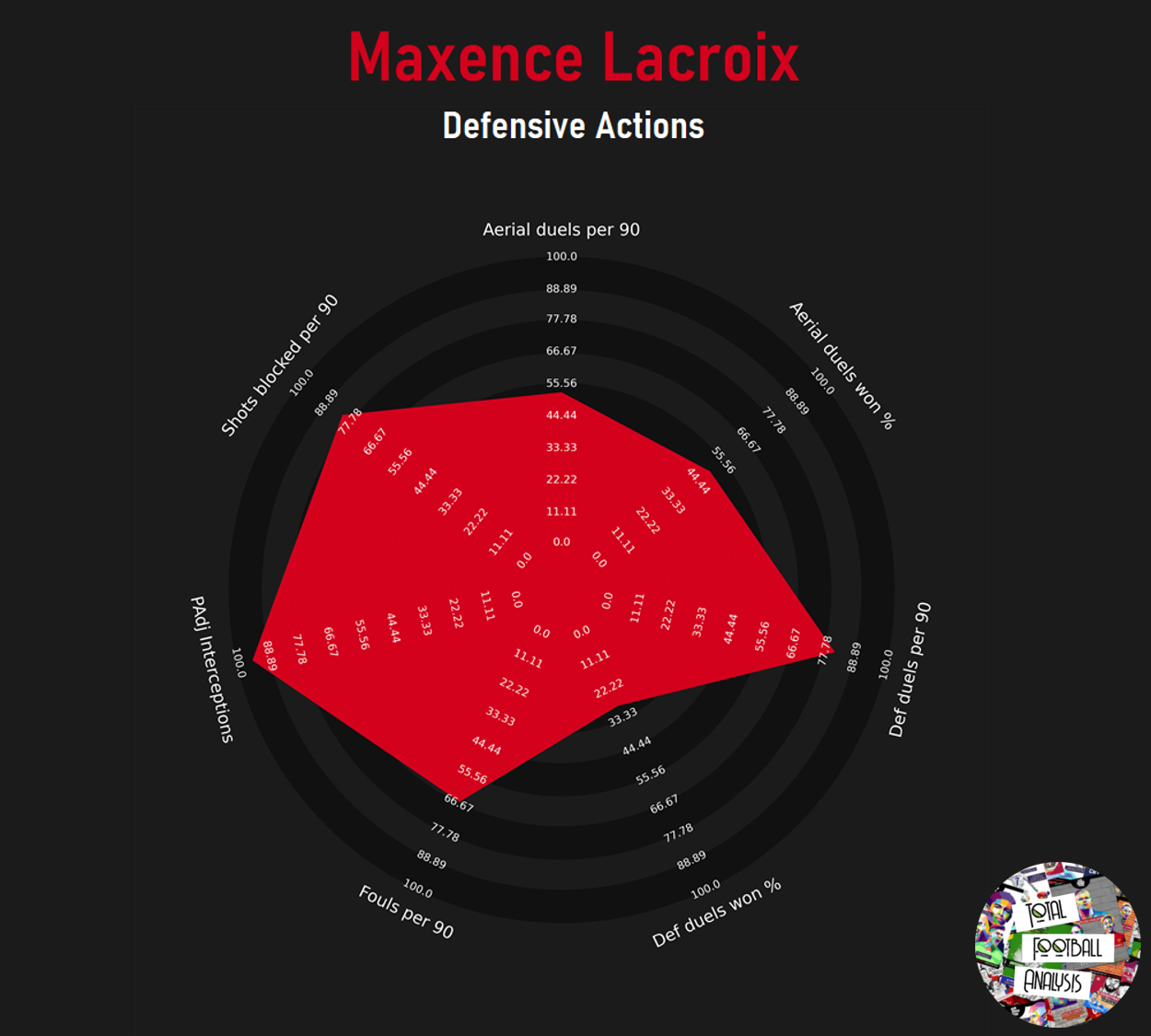 Lacroix’s defensive actions radar in the 2020/21 Bundesliga season so far.

In the above radar, we can realise what we are seeing in the eye test is backed up in the stats. His clever defensive positioning is reflected in his high PAdj interceptions per 90. This, in addition to a high proportion of shots blocked per 90, gives us a decent interpretation into the type of defender that young Lacroix is.

Foundations of a useful aerial ability

In terms of Lacroix’s ability in the air, he has laid down the foundations to be really strong in this regard. He is 6’3” and possesses a good leap, if unspectacular compared to some of the other defenders in the league, such as Liverpool-linked Ozan Kabak at Schalke. As we have detailed, his defensive positioning is strong (in a ground duel sense), and this has aided him in reaching the ball in the air before his opponents. 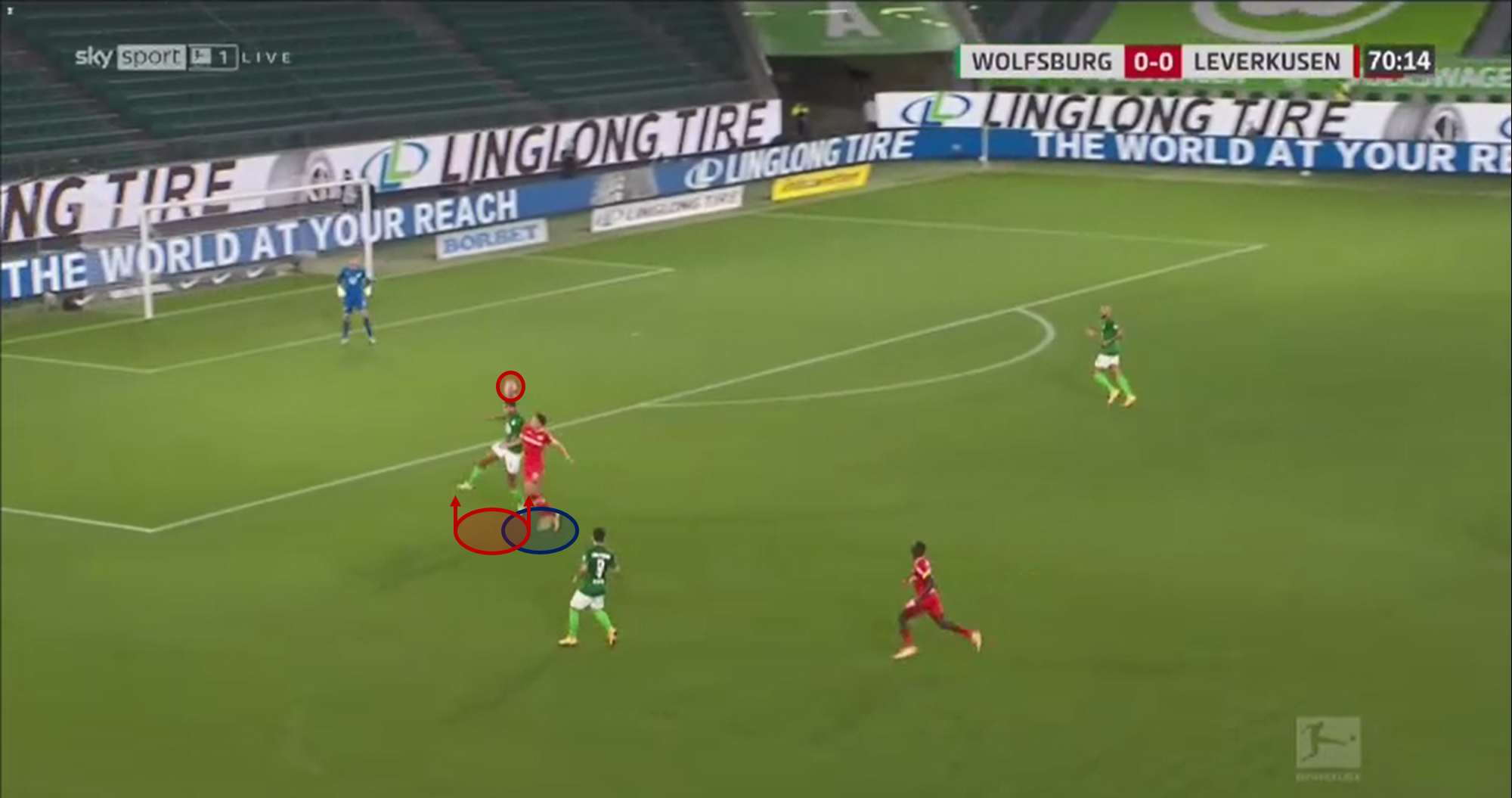 A long ball is played towards Lucas Alario, but thanks to Lacroix’s positioning from where he leaps, he can reach the ball before the Argentinian has even jumped.

Despite his positioning being solid, and his ability to mark his opponent is underpinned by his speed and strength, he is sometimes susceptible to be caught lacking when pressuring the midfielder as we mentioned earlier. His aerial duel success rate stands at just 50%, which is concerning.

It is however less concerning when you consider the system he is playing in, and the opposition he has played against thus far. In this game versus Leverkusen, Edmond Tapsoba would consistently play the unexpected long ball which caught the young Frenchman off-guard. 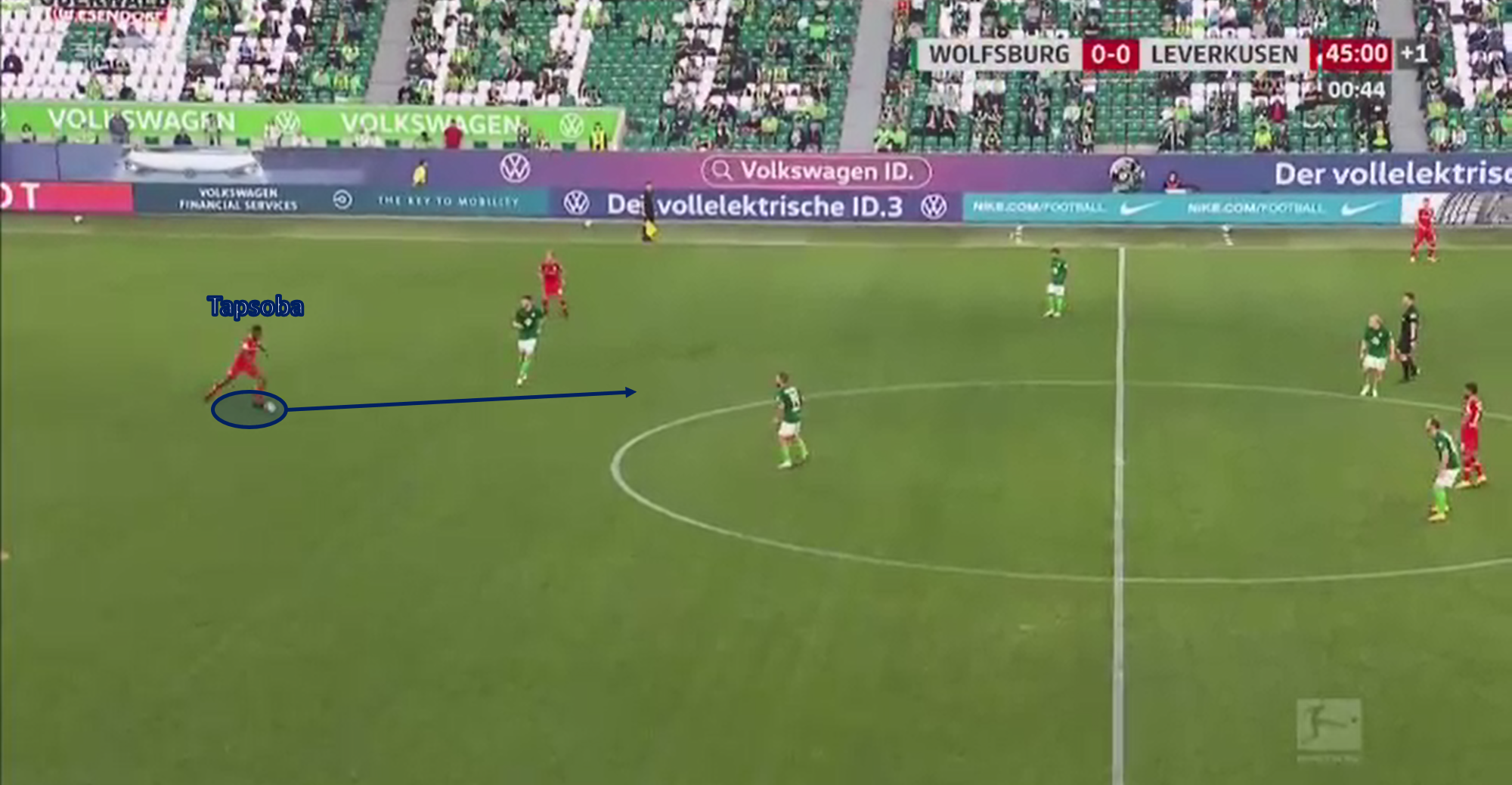 Here, Tapsoba collects the ball and spots the Wolfsburg defence playing a high line, with Alario making the run in behind. 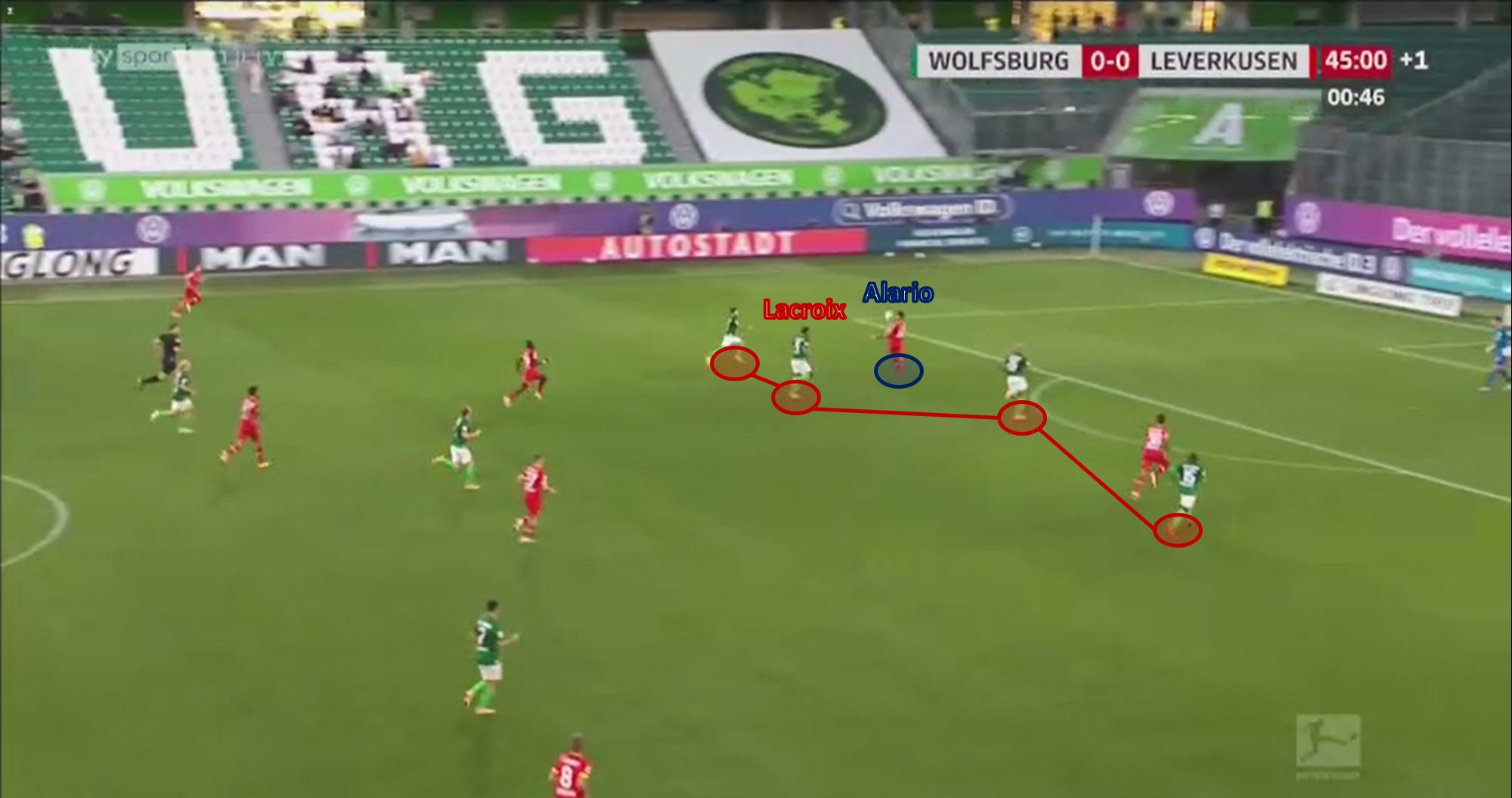 Tapsoba finds Alario, who has positioned himself beyond Wolfsburg’s high line. Lacroix was drawn out of position and misjudges the flight of the ball as a result.

Now, having said all this, all these aforementioned stats and potential issues we are taking from a very small sample size. He has played just 540 minutes of Bundesliga football, and embedding problems were bound to arise, and overall, he has adjusted admirably to the intensity of a fierce top tier division.

His height, solid leap, and great positional sense make for a robust base to build off of, and we can imagine he will grow more comfortable in Glasner’s tactics if the early eye test is anything to go off. Glasner does demand a lot from his defenders, and the 20-year-old has been a key contributor thus far to his sides great defensive record.

This season, we have seen Wolfsburg operate a 3-at-the-back system in possession, with both Jérôme Roussillon and Ridle Baku roaming forward, while one of the central-midfielders will stay back to form a back three.

Glasner encourages build-up to be forced down the wings via the full-backs, rather than expect penetrative passing from his centre-backs. Lacroix, relaxed in nature, fulfils this role well, playing short passes and carries the ball into space when required. He prefers the safe, short-passing approach, either to the closest midfielder, Brooks as his defensive partner, or one of the full-backs out wide. 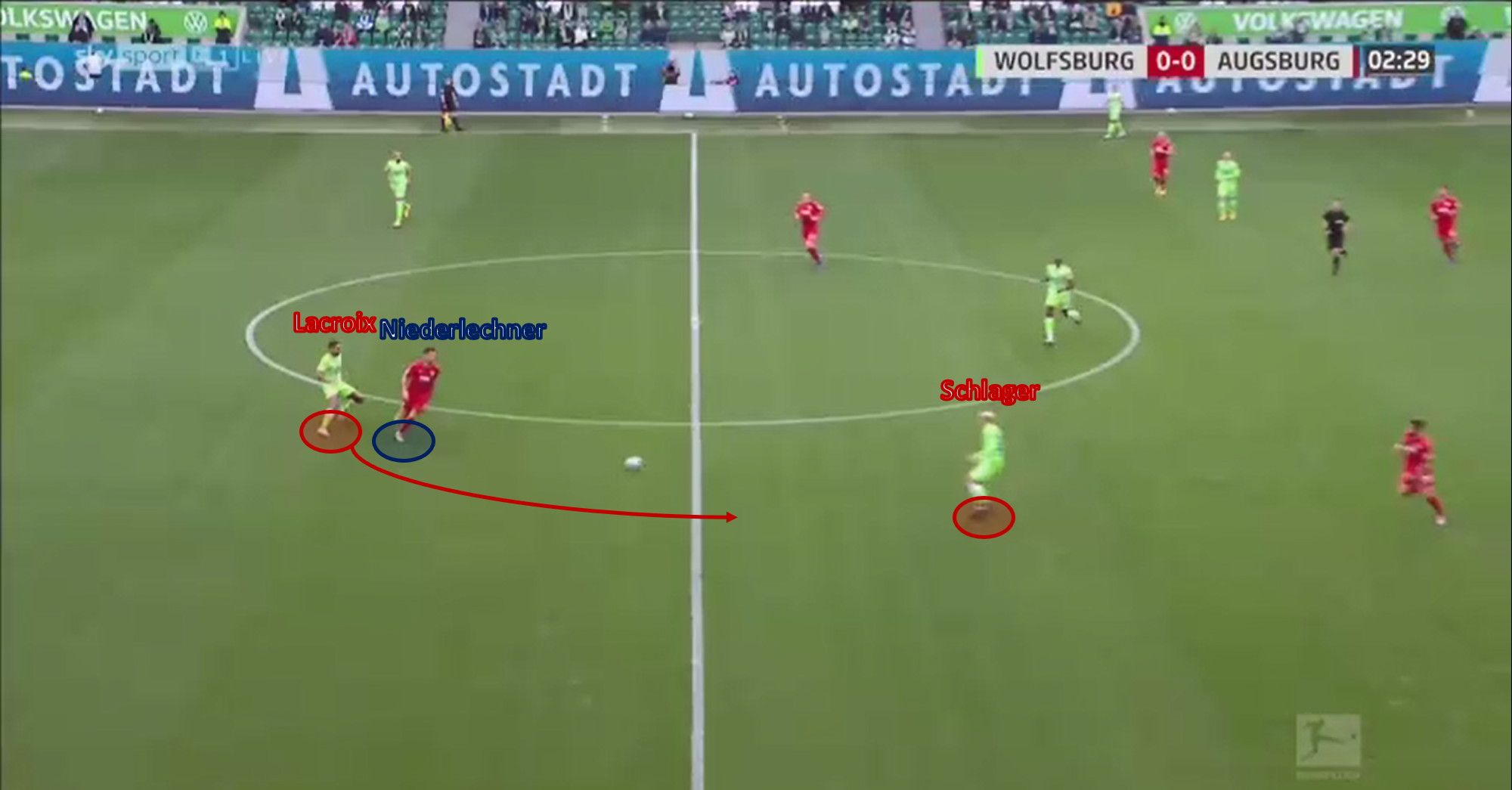 Under pressure from the Augsburg forward, Lacroix plays the short pass to central-midfielder Schlager calmly. 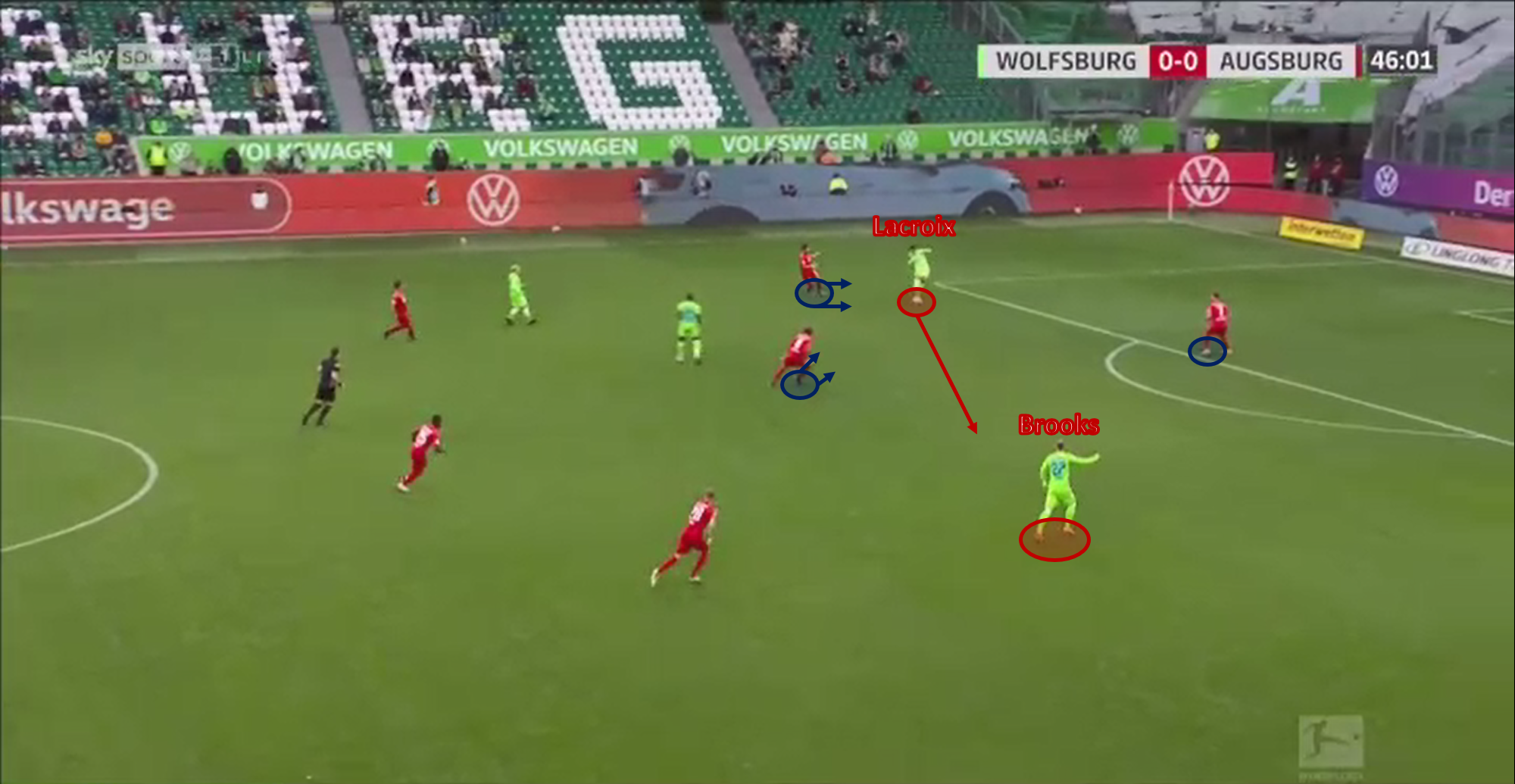 Receiving pressure from a couple Augsburg forwards, Lacroix takes the safe bet in laying off the ball to his defensive partner, Brooks.

Lacroix could definitely be more ambitious in his passing selection. On occasion, he will spray a long ball, but it feels as if Glasner would prefer that the Frenchman did not. Unlike players in the final third, losing the ball in your own half can have serious consequences, and unless Lacroix uses his recovery pace effectively, this could leave him in a lot of trouble defensively.

Currently, the 20-year-old rarely plays through the press, and he has a fair laissez-faire approach to his passing style where he could speed up his decision making and keep the tempo high. Though at times he is progressive, and with good technique, one would suggest that he is in a period of extraordinary development in this stage of his career. Therefore, we can expect this to improve as the season goes on, given the flashes of a progressive spirit we have seen thus far. 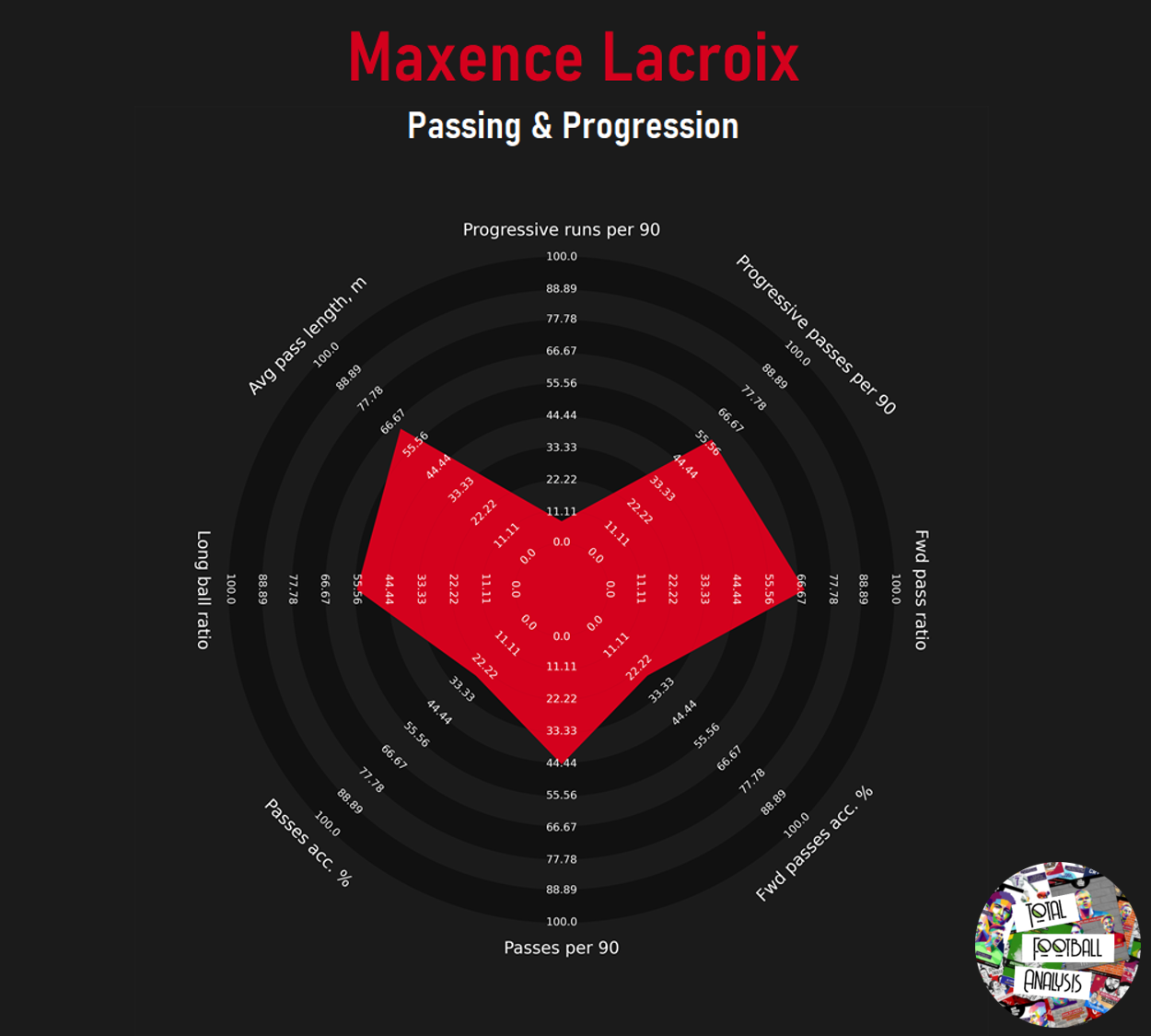 Lacroix’s passing & progression radar in the 2020/21 Bundesliga season so far.

In the above radar, we can see that Lacroix does not rank highly in any passing metric for a defender. At Wolfsburg, it is clear to see that the more accomplished central-defender, Brooks, is tasked with the majority of deep progression. Though they complement each other nicely in this regard, with Brooks being a left-footed centre-back, he can open up the left side of the field with his passing, and with time, hopefully, Lacroix can do the same.

In his first six games of top-level football, Lacroix has shown a bunch of promise in Germany. He only became a starting fixture for Sochaux just over a year ago, so it is really impressive to see the progression of career so far. When he has been trusted with game time, he has done nothing but impress, so it would not be a huge surprise to see bigger clubs than Wolfsburg circle around the 20-year-old for his signature within the next 12 months.

For now, he remains a Wolfsburg player, capable of playing at a good Bundesliga level. He clearly works hard, and he has the positional intelligence and concentration necessary to make it at a top-level, but he has a few bolts to iron out of his game just yet before he can claim a starting birth for a fiercely competitive France national team.

All radars in this scout report were created by the wonderful Sathish Prasad (@SidelineAnayst on Twitter). Go check out his stuff!