The Busby Babes. The class of 92. Manchester United have a tradition of promoting youth. Mason Greenwood is next in their production line. Their attitude over the years has been if you are good enough you are old enough. In recent times Scott McTominay, Marcus Rashford and Andres Pereira have broken into the First Team. Jose Mourinho might not have the best reputation for promoting youth players but Mason Greenwood will be hard to ignore.

Mason Greenwood began his career in midfield pushing forward as a number 10. Last season, he evolved into a striker and scored 17 goals in 17 appearances. He was selected for Manchester United’s pre-season tour in the United States making his first appearance in the 1-1 draw with Club America. He was the top scorer in the Under-18 Premier League North despite being two years below the age group. Still only 17, he signed his first professional contract in October and has also represented England at youth level.

17 goals in 17 games is a good return at any level. Impressively, Mason Greenwood achieved this when he was 16 in a league with players two years his senior. He has now stepped up to the UEFA Youth League squad at under 19 level but what makes his finishing ability so impressive?

Earlier this month, Manchester United under 19s beat Valencia under 19s 4-0. Mason Greenwood got on the score sheet and showed how he has merged his natural ability as a midfielder into his new striking role.

Arriving late into the penalty area 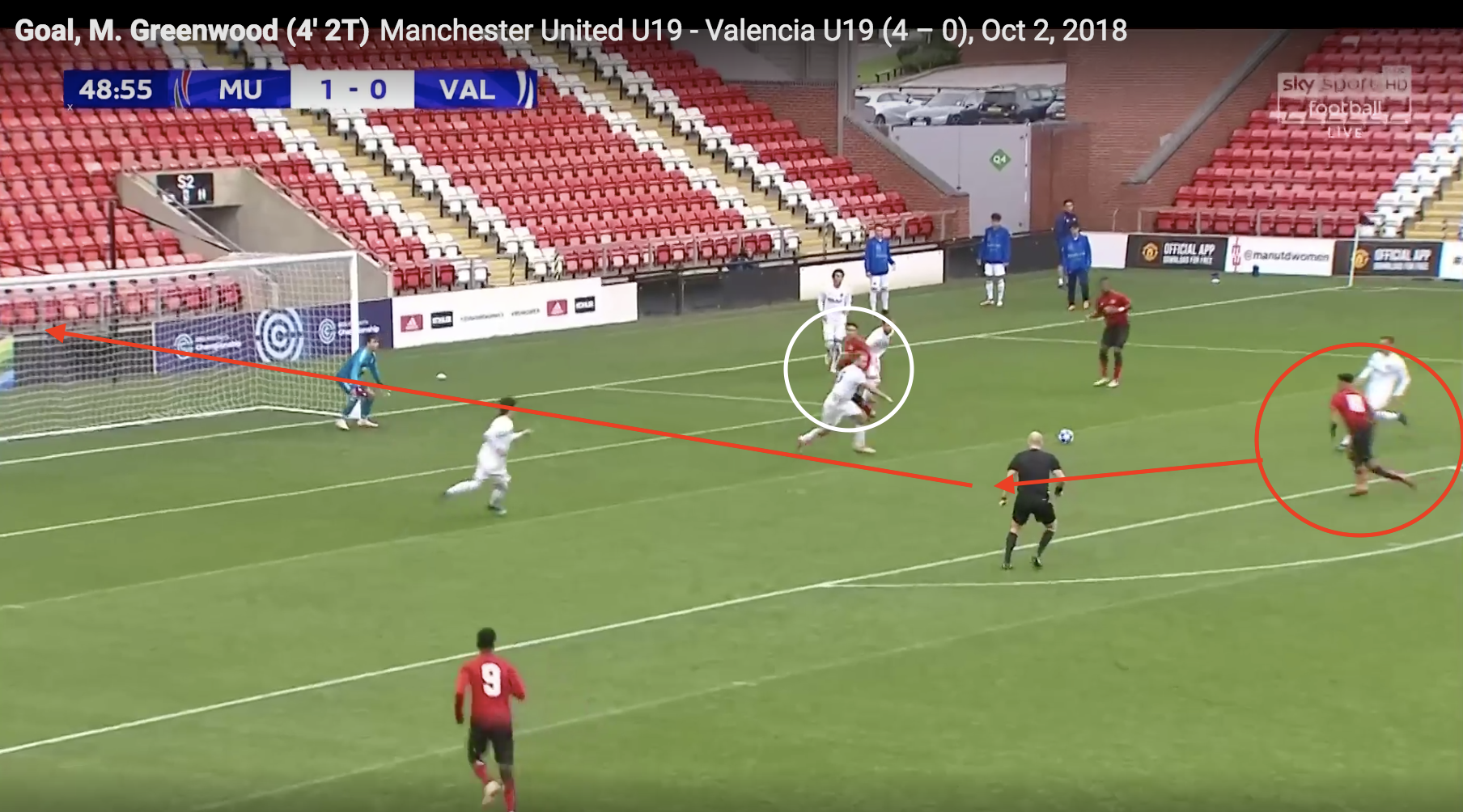 Mason Greenwood’s ability to arrive late into the penalty area is reminiscent of Wayne Rooney. Whilst it is too early to be comparing him with the England legend, this goal shows similar ability. Mason Greenwood allows the number 9 (highlighted in a white oval) to create space ahead of him whilst he awaits the pullback from the right wing. The number 9 has pulled the defenders away from the space. This then creates enough space for Mason Greenwood to score. His ability to delay his run and use intelligence to recognise the space was key to this goal. 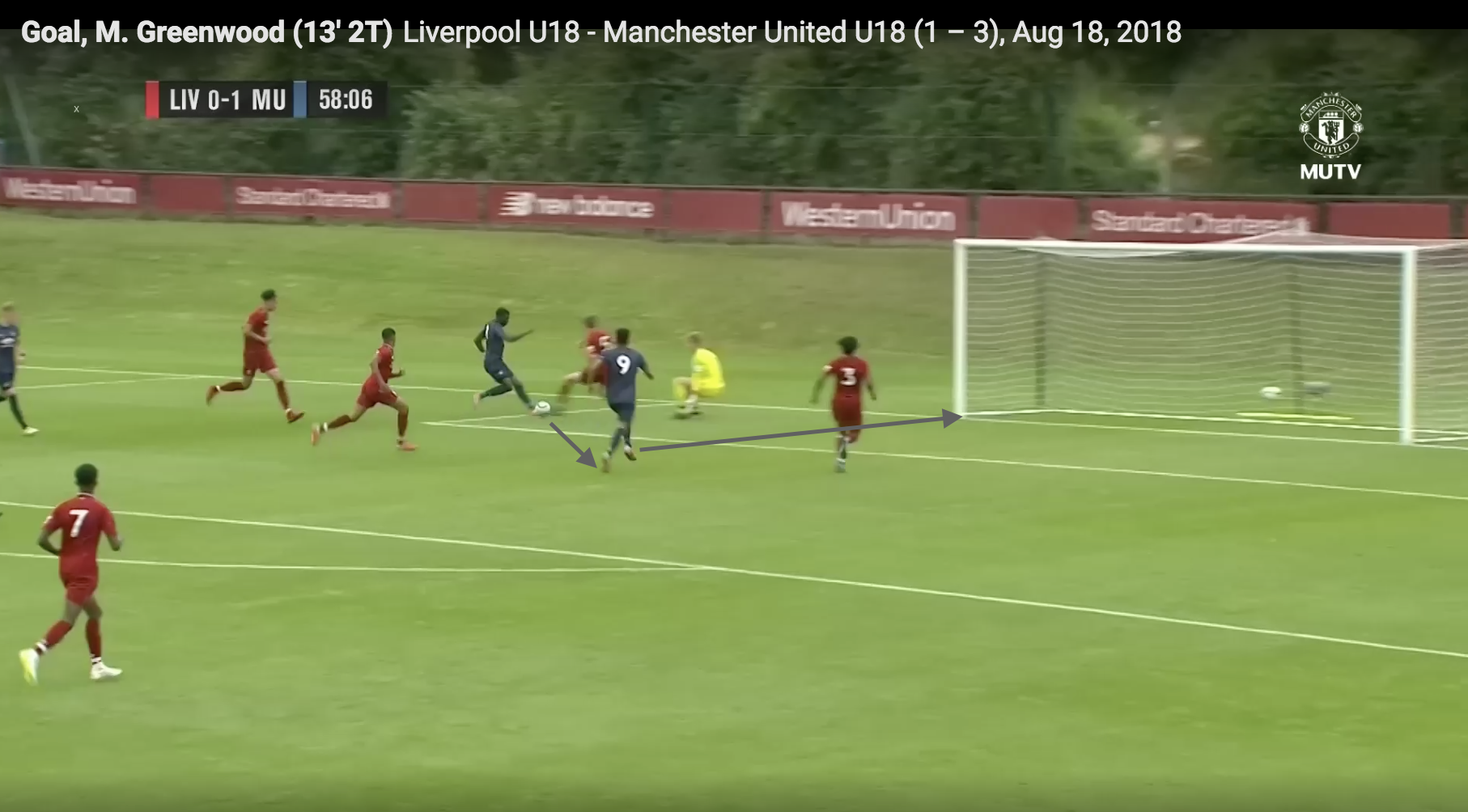 However, Mason Greenwood can also lead the line. His goal against Liverpool under 18s came from him leading the line and anticipating the wingers cross. During this move, he did not need a central striker to create him space. Instead, he led the line and provided the final option for the winger as he drove into the penalty area. 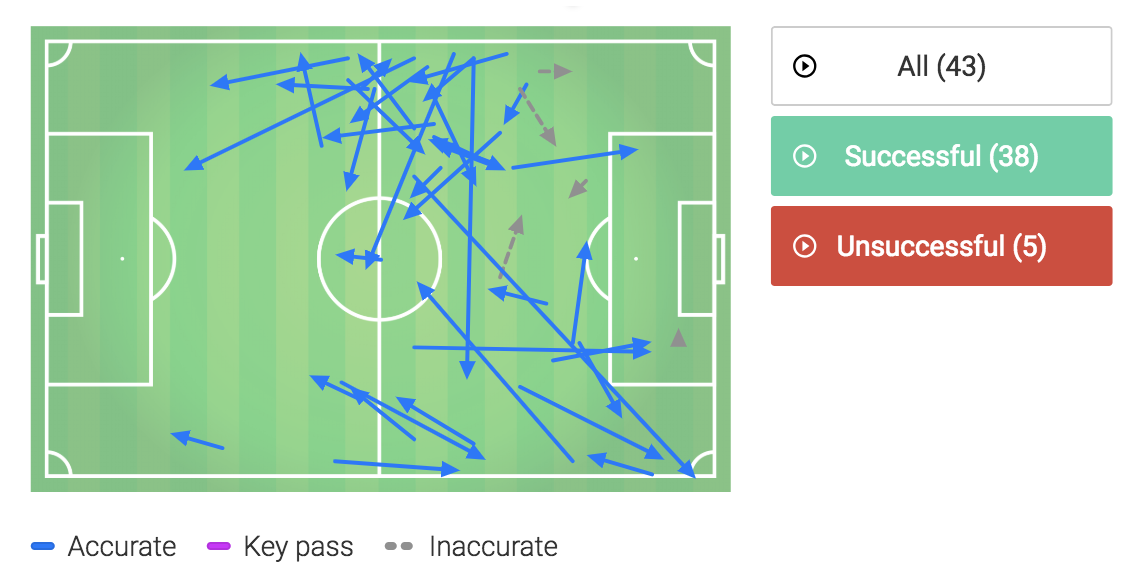 As the modern game progresses, ball retention is becoming more and more important. The England DNA philosophy focused on controlling games through possession. Manchester United enjoyed their glory years through controlling games with the ball.

Above is Mason Greenwood’s pass map from the UEFA Youth League game against Valencia. He achieved a passing accuracy of 88%. This was fundamental to Manchester United controlling the game. Gone are the days of lumping a ball forward to a target man and flicking the ball on. The modern game is focused on using the number 9 to hold up the ball and bring others into play.

Interestingly, one observation can be made that Mason Greenwood could easily adapt into a false 9. He is equally adept at dropping deep for the ball and has a good range of passing (illustrated above) to bring others into play. 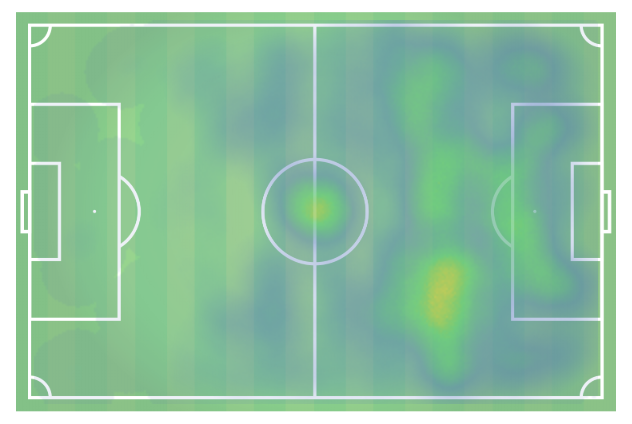 His off the ball movement also highlights how he can play anywhere across the front four. He is most prominent in central areas, which might prove difficult to break into unless Romelu Lukaku or Marcus Rashford experience a long-term injury or a drop in form.

The Manchester United coaching staff may look to use his ability to play across the attacking areas to provide them with another option out wide. His main problem, whilst Jose Mourinho is still manager, is that a false 9 or a true number 10 are rarely deployed in his tactical systems. This then leaves Mason Greenwood with one true opportunity to break into the First Team as the lone striker. Jose Mourinho has only ever done this once with Mario Balotelli at Inter Milan, he is not a real believer in youth players.

However, should Jose Mourinho be replaced and a manager come in with a different tactical style. Mason Greenwood could be an injury away from showing off his talents at the ‘Theatre of Dreams’

The two goals show a striker capable of leading the line himself or playing in the whole as a number 10. This will be important as he progresses into the First Team. First Team opportunities will be limited but being able to play in a variety of options in the front three will be crucial to breaking into the team.

Mason Greenwood’s ability to play in different positions will enable Jose Mourinho to give him First Team opportunities. However, with Manchester United regularly playing without a number 10 he might need to look at the wide positions to break through. We explored the demands Jose Mourinho places on his wide players with Alexis Sanchez and this may not suit Mason Greenwood’s creative style. However, his path could be very similar to Marcus Rashford. To gain experience in the First Team, he may need to play as an inside forward and later look to develop into a central striker.

Earlier in the season, we questioned how Manchester United can evolve their style of play. If you are looking to be an academy graduate you now need to look at how you can diversify your style to fit into the manager’s system.