Marko Bulat is a very talented youngster who plays for HNK Šibenik in 1.HNL. This scout report is a tactical analysis on Bulat’s attributes and qualities, but also where he needs to improve.

Bulat made his senior debut at the age of 16, and he has been a crucial part of the Šibenik squad since then. He is currently part of the Croatian U19 national team where he has collected 9 caps so far. There was an unfortunate turn of events for him last year, where he had one foot in Barcelona, before borders were closed and flights got cancelled due to the COVID-19 pandemic, which prevented him from signing for the Spanish giants. After Eric Abidal’s resignation at Barcelona, it became for difficult to arrive at an agreement and Bulat stayed at his hometown club as a result. He was also linked with a move to Manchester City, but the Premier League table-toppers did not follow up on their interest. However, Bulat has now earned promotion to 1.HNL with his side, and has got a chance to show his talents on the highest stage in Croatia.

Marko Bulat is a 19-year-old midfielder who can play as a central midfielder and as a defensive midfielder. Transfermarkt values him at 1.5 million euros. Bulat is 178cm tall and is right-footed. 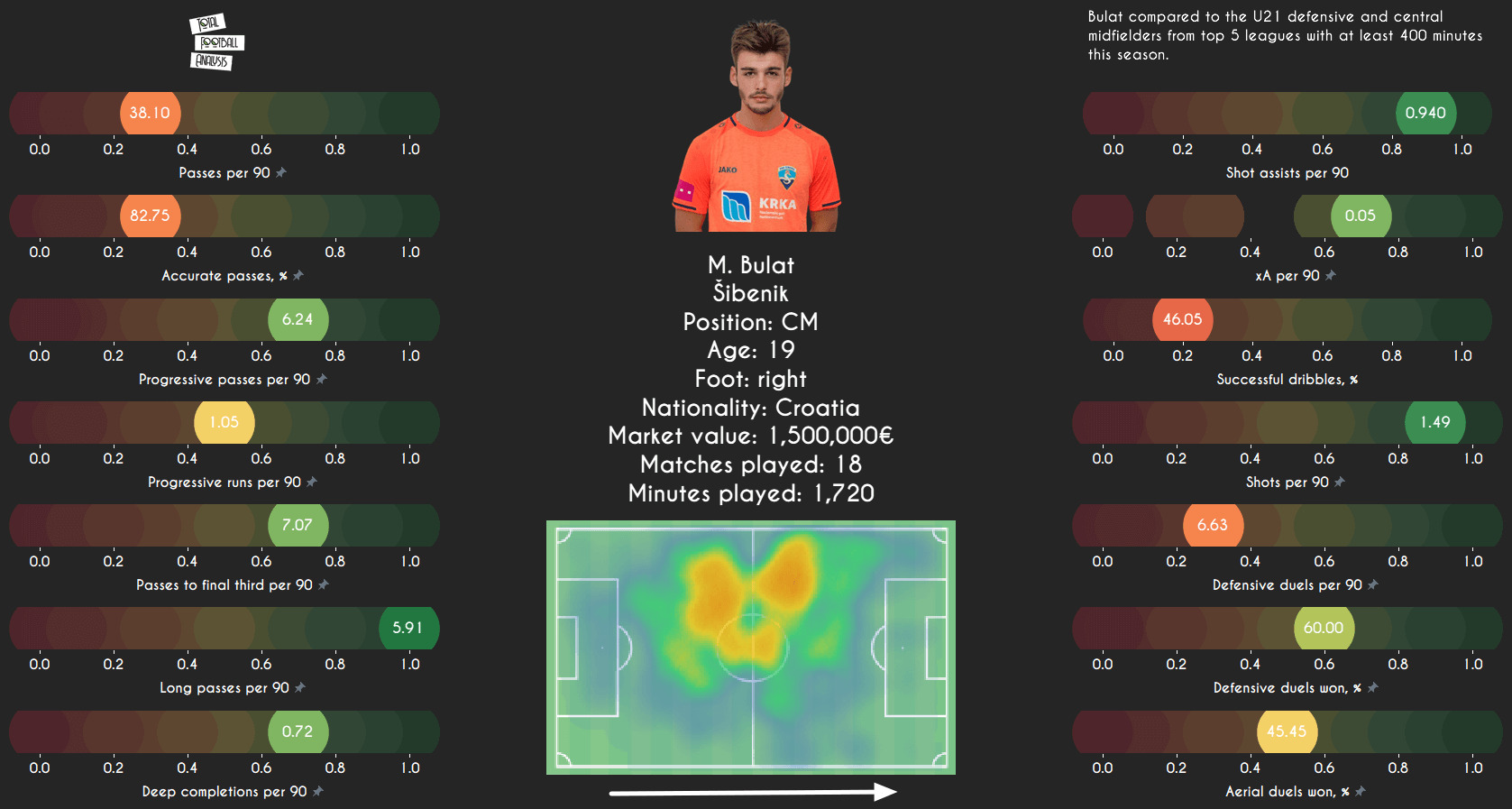 In this image, we can see how Bulat looks compared to U21 midfielders from the top five European leagues, who have played at least 400 minutes this season. Of course it needs to be taken into account that he plays in a weaker league, but he looks very good in most of these metrics. He attempts the most long passes per 90, although this is a result of Šibenik’s style of play, as they always try to be direct, and Bulat is a crucial part of their tactics. He is one of the best in terms of shot assists per 90 and shots per 90. He looks very good in defensive duels by winning 60% of them. This season he has played mostly as a left-sided defensive midfielder in a 4-2-3-1 and as a left central midfielder in a 3-4-3 which can be seen in his heatmap as well.

Even though Šibenik are a newly-promoted team, they have not moved away from their attacking style of football and they create good chances in each match. Bulat is a crucial part of their philosophy and he has the responsibility to distribute the ball quickly towards his teammates in advanced positions on the pitch. What Bulat often does is switch the play with a long ball to the flanks. In a 3-4-3 formation which the team have played lately, it is very important to switch play frequently to create 1v1 or 2v1 situations on the wing. 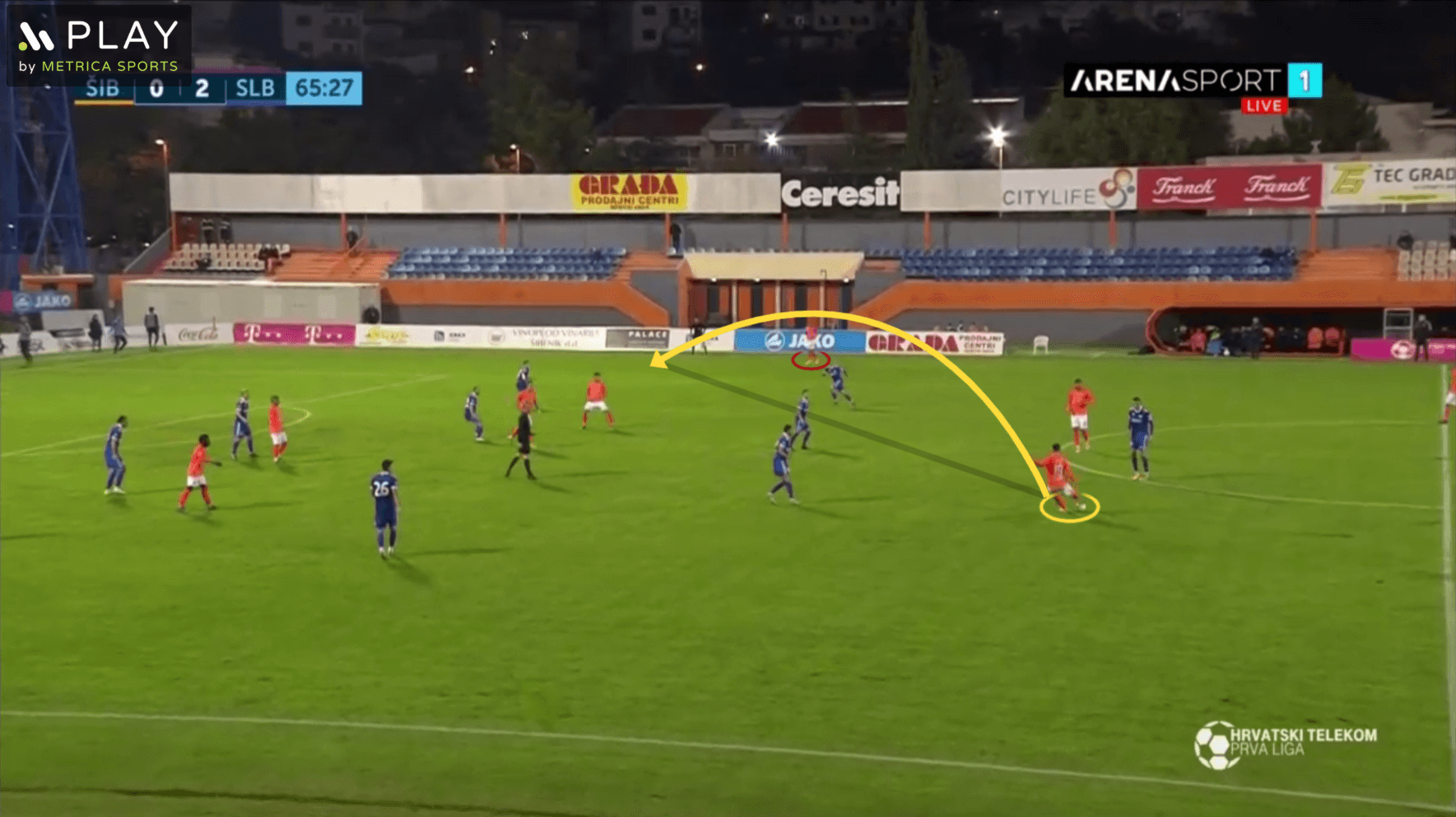 The above image is an example from a match against Slaven Belupo. We can see that Slaven Belupo defended narrow in this situation and Bulat attempted a long pass towards the right-back who had a lot of free space in front of him. That pass quickly put Šibenik in a very good situation in the final third because we can see that almost the whole midfield line was able to attack the box as a result, and the opposition defence was outnumbered. Bulat is capable of making this pass on a regular basis which is a high-quality trait.

In the example below, we can see a more advanced situation where Bulat attempted a long pass into the penalty area. His teammate demanded the pass and he managed to chip the ball perfectly over the defender to him. An important part of this move is that Bulat scanned the pitch quickly and found a teammate who was in the best situation to receive the ball, showing his vision and technique to see and execute these passes. 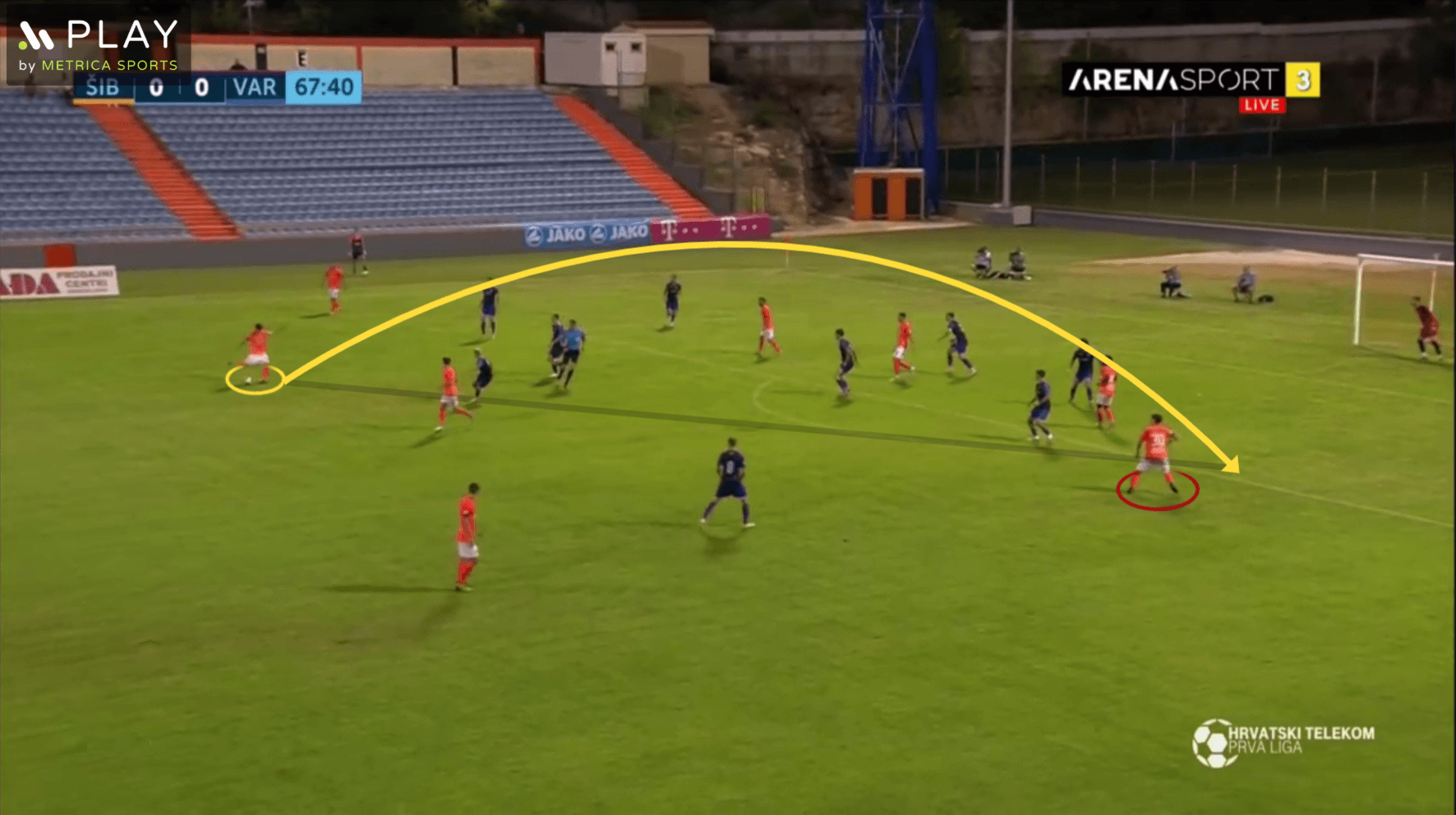 The next image shows Bulat’s vision and first touch to put teammates into good position in the opponent’s penalty area. We can see that Bulat found himself in a tight space and was pressed by the opponent. His teammate sees the last defender standing deep and decides to exploit the space behind the right centre-back by making a run behind him. Bulat instantly recognises the run and attempts a through ball into the penalty area. He usually gets into these situations during counter-attacks, because he is positioned deeper when Šibenik have possession. However, when he gets into these situations, he can make a killer pass.

In the example below, we see Bulat starting a counter-attack with a pass into the open space for the centre-forward. Šibenik regained possession and Bulat made a short run towards the right side before attempting the pass. Even though the pass was successful, the pass itself could have been quicker in this situation, but the timing of the pass was perfect. It is something Bulat tends to do when he has a chance and his coach encourages him to attempt risky passes which can lead to promising chances. 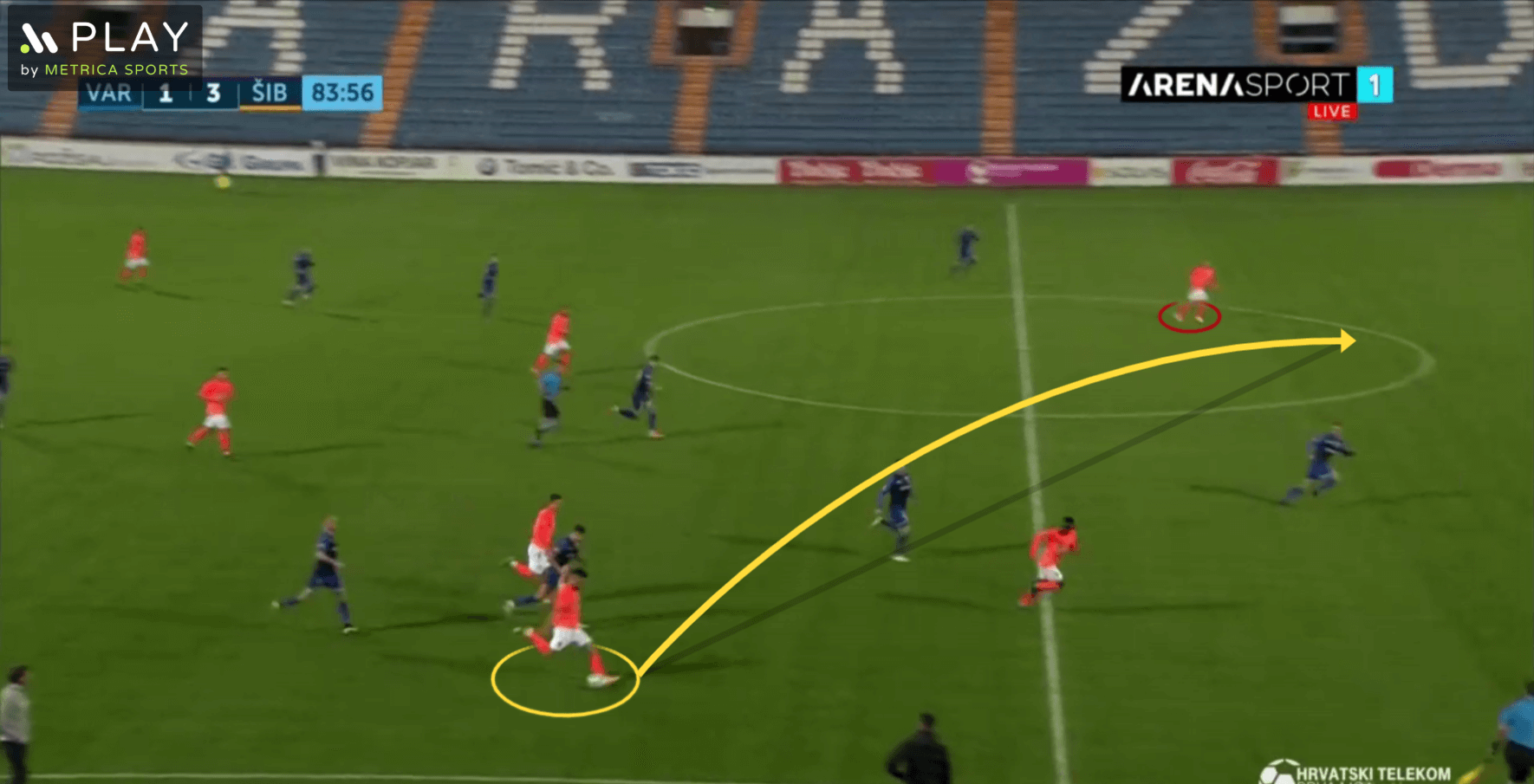 Off the ball – defending

In this section, we will take a look at Bulat’s defensive work. Given Šibenik’s playing style, it is important that Bulat covers a lot of ground and positions himself smartly. The youngster showed great defensive responsibility this season and very good reading of the game. 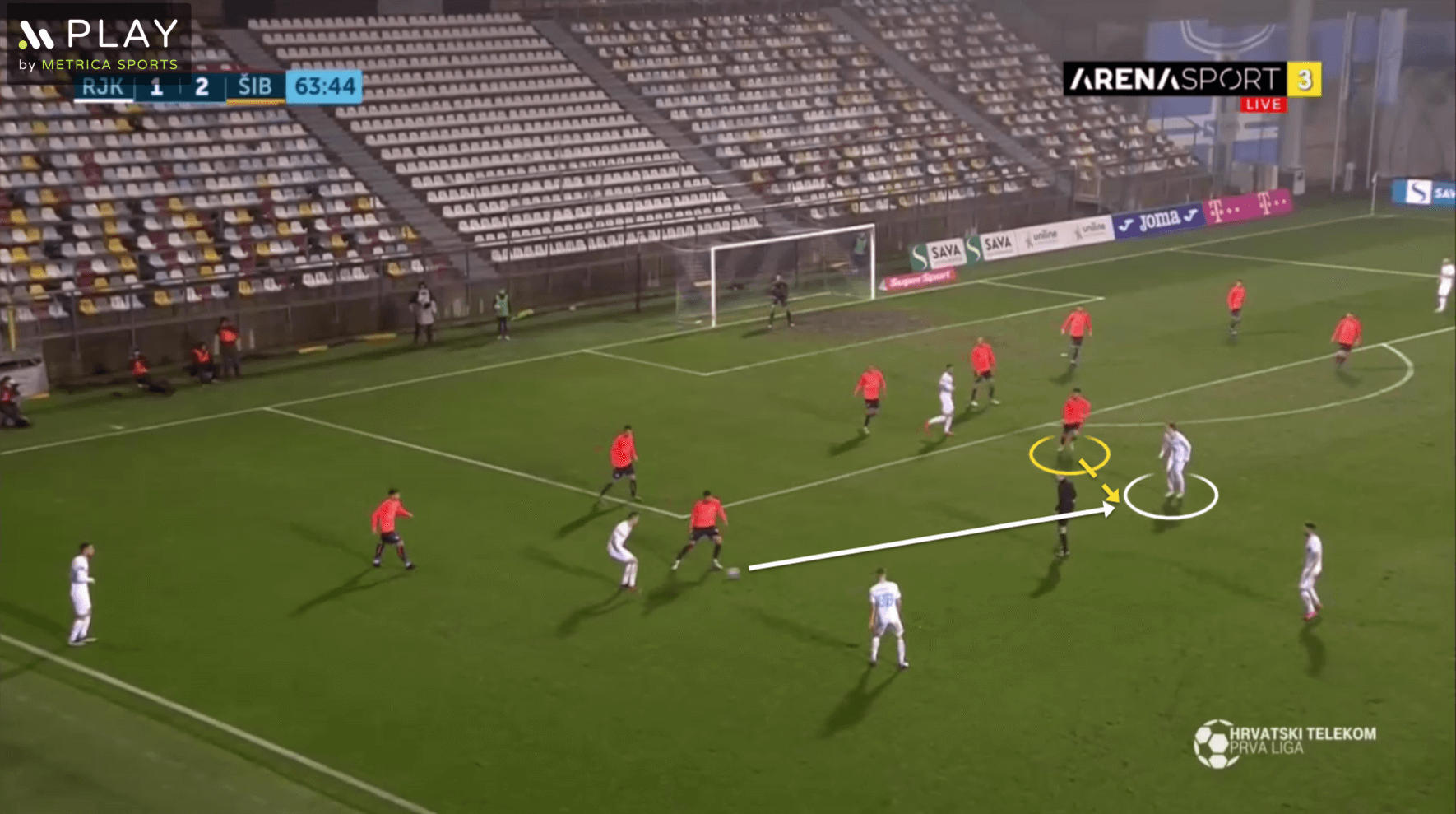 The above image above shows us one moment where Bulat anticipates the situation well and recovers possession. Bulat deliberately trapped the passer to create space for his teammate to pass it towards him, but the moment he attempted the pass, Bulat had already started accelerating towards the receiver. Bulat’s aggressive approach and instant pressure here allow him to dispossess the opponent. He protects his backline very well in these situations, often recovering the ball in his own third, but also by blocking opponents’ shot attempts frequently. 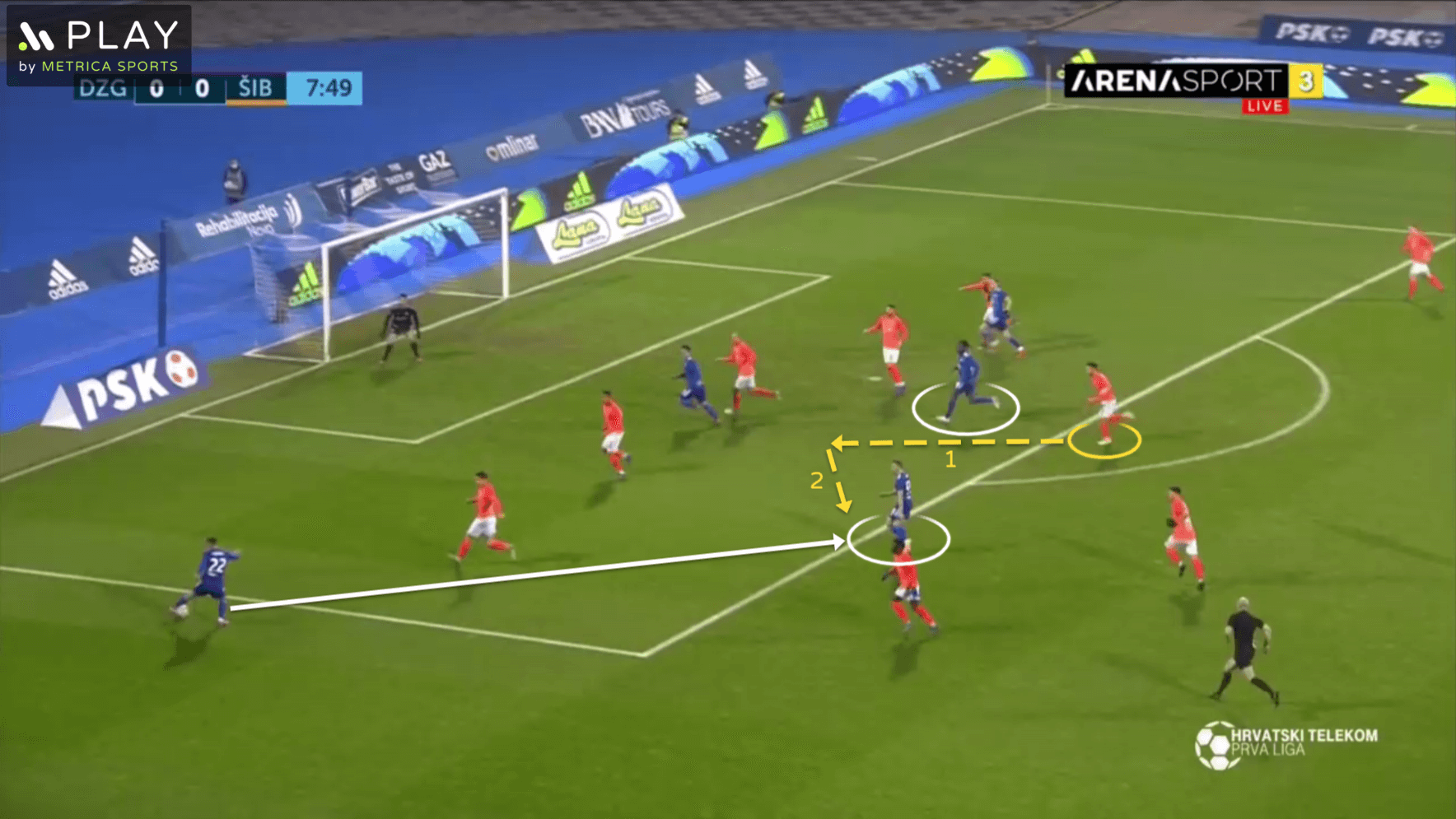 This example shows us a situation when Bulat is covering space. Dinamo made a quality attacking move, which exploited the space left by Šibenik, and the left-back was in a good position to attempt a cross or cut-back pass. Bulat tracks back in order to cover the cut-back pass towards the penalty spot which is the most dangerous area and where there is a Dinamo forward waiting. However the left-back decided to cut the ball back to the player on the edge of the box, but Bulat could close this pass down as well since he is in a good position. The Dinamo player attempts a shot but Bulat makes a well-timed block. 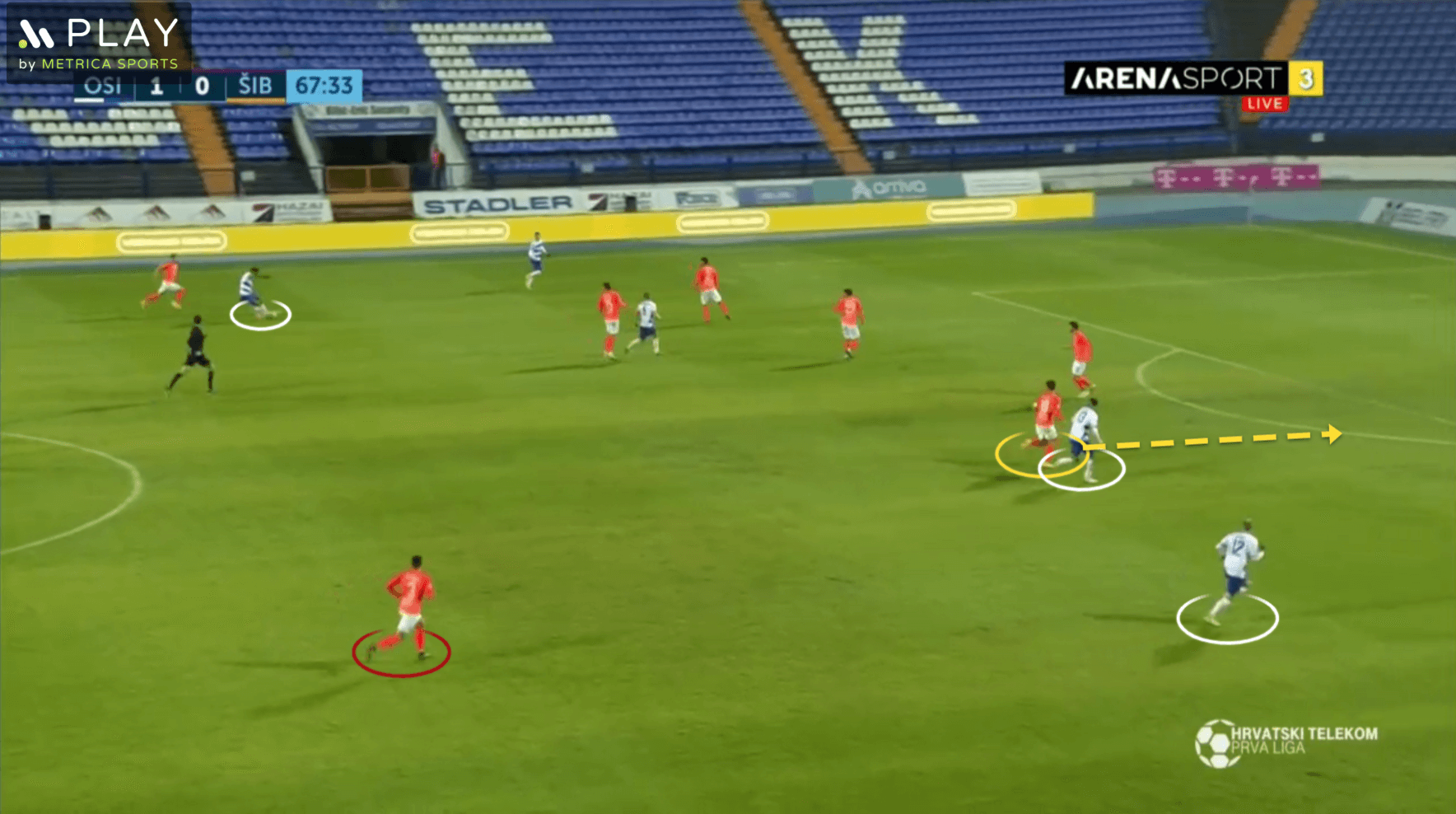 The last example in this section is a situation from the match against Osijek. In a 3-4-3 formation these situations can happen, where the wing-back is too far away to make a recovering run quickly during defensive transitions. Bulat does a great job to cover his teammate and close space close to his goal. We can see by the body posture of all three centre-backs that they are ball oriented, and if Bulat didn’t cover the space behind the left wing-back, they would have a lot of problems in this situation. His movement prevented a direct ball towards the opposition centre-forward who would have otherwise had a clear goal-scoring opportunity. He shows responsibility and work rate in each game and leads his team despite being so young.

This section will show us how good Bulat is in the final third. He often likes to drift to the left flank and make runs trying to isolate himself for 1v1 situations. He is technically gifted and has the ability to create space with his dribbling. The situation below will show us an example of how Bulat can make an impact when drifting wide. 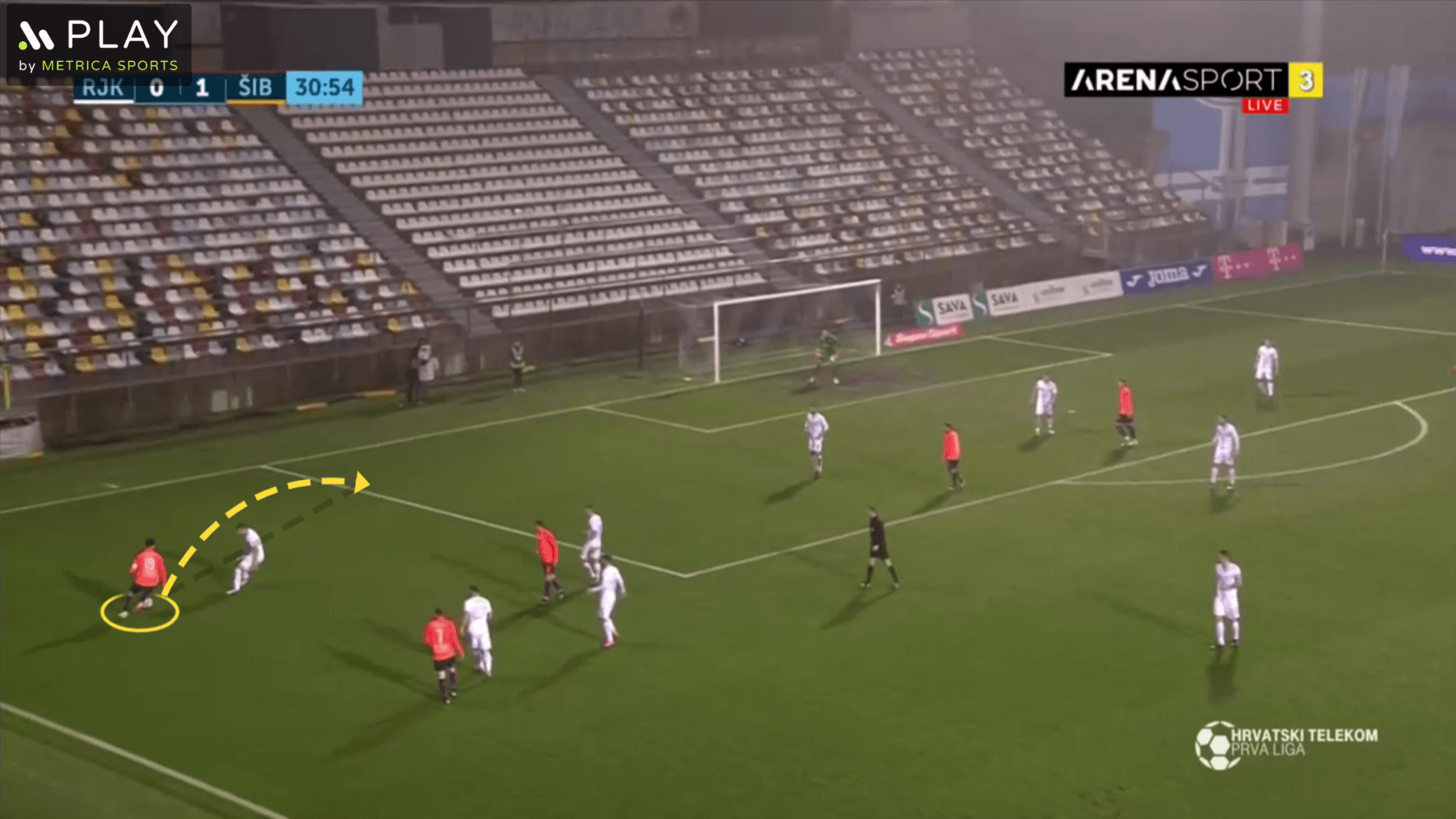 Bulat frequently tries to get into these situations, mostly via overlapping runs or as a receiver of throw-ins. He doesn’t have a clear tendency to go right or left, but rather engages his opponent into a tackle before beating him with close control and accelerating. In this situation he decided to go left and in the next frame we can see how this created a lot of space for him. He passed to his teammate who was unmarked and this situation led to a goal. We can see that he can make an impact through his dribbling ability, and not only as a passer. 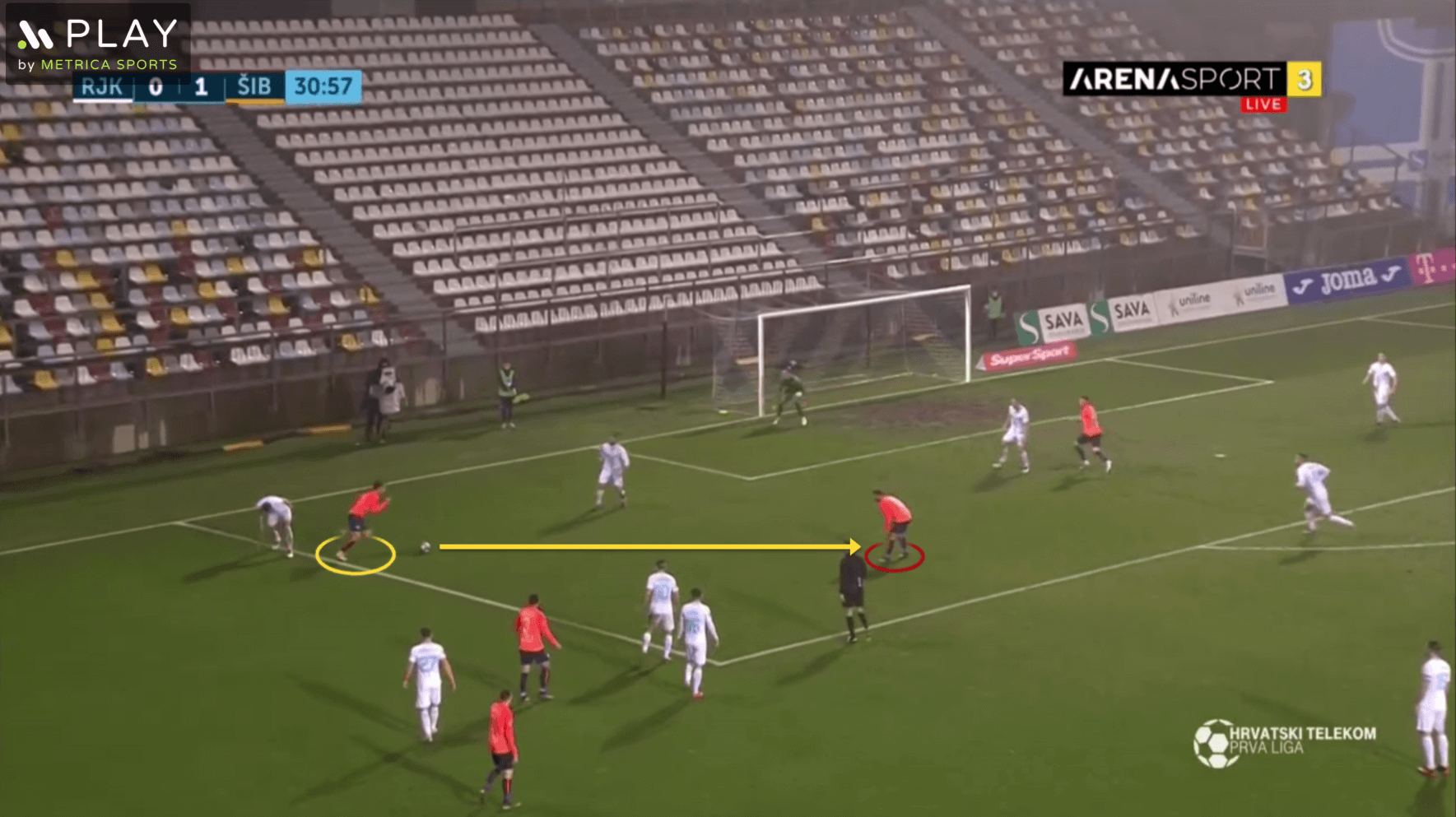 Shooting is the one area where Bulat has a lot of room to improve. The image below shows us his shots this season, where the stars represent goals, while the size of markers represent the xG value of that shat. He has a powerful shot and he can hit some dangerous long-distance shots, but he should be getting into better positions to shoot. He has attempted 28 shots this season, with two of them being penalties. Excluding penalties we can see that he has attempted only four shots from inside the penalty area, with one ending up as a goal. Getting closer to the penalty area and trying to shoot from central areas can earn him more goals. We can see that given the size of the markers that he usually shoots from low probability positions, which is a tendency he needs to reduce in the future. 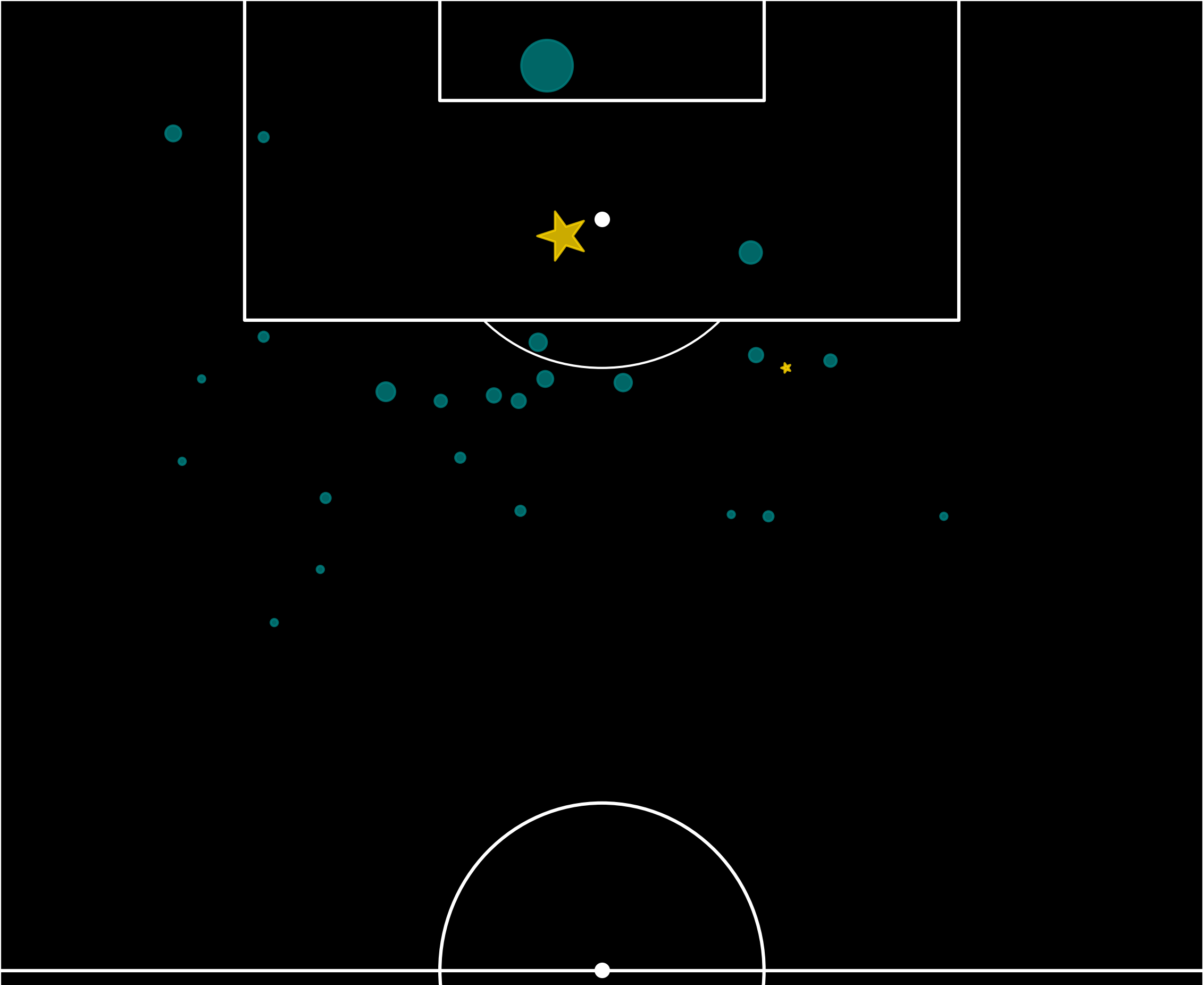 This analysis has helped us evaluate this youngster’s traits, abilities, as well as the areas he needs to work on. Bulat’s performances are on a very good level this season and if he can keep his form at this level for the whole season it would be a great sign of his improving maturity. Moving to a better club could push him to fulfil his potential, which is at a high level, given the attention he has already received from top clubs in Europe. The summer window is only a few months away and it won’t be surprising to see him making a move.