Brilliant Baah: Scout report on the top talent snapped up by Man City

On the last day of the 2021 winter transfer window, Manchester City were finally linked with a player, albeit one for the future – Kwadwo Baah, an 18-year-old kid from Rochdale AFC. The Manchester side did not sign him in that window, though, since his contract was expiring at the end of the season, and have duly signed a pre-contract agreement with him to join them upon the expiry of that deal.

What is it about Baah that drew City’s interest? What are his strengths? How has he performed under Brian Barry-Murphy this season? In this tactical analysis, we will provide a full scout report of the player, evaluating his strengths and weaknesses.

Baah is an attacking player. As can be seen in his career heat map in the image, he can play on both flanks, and also as a striker as well at times. He has generally been played on the left, but has the ability to be involved in the game no matter where he plays.

This analysis combines the use of statistics and in-game examples to evaluate Baah’s level. First, we use numbers to compare his statistical output with his counterparts in League One. All data is taken from Wyscout.

Baah is extremely aggressive on the ball and quite proficient at dribbling, as can be seen from his position in the top right-hand quadrant of the chart, which indicates that he has been better than average for both number of dribbles per 90 and dribble success rate.

In fact, with 11.28 dribbles per 90, he has the highest number of dribbles per 90 of this set of players. The success rate of 58.95% is quite impressive as well, and it would not be incorrect to conclude that dribbling is one of the strengths in his game. 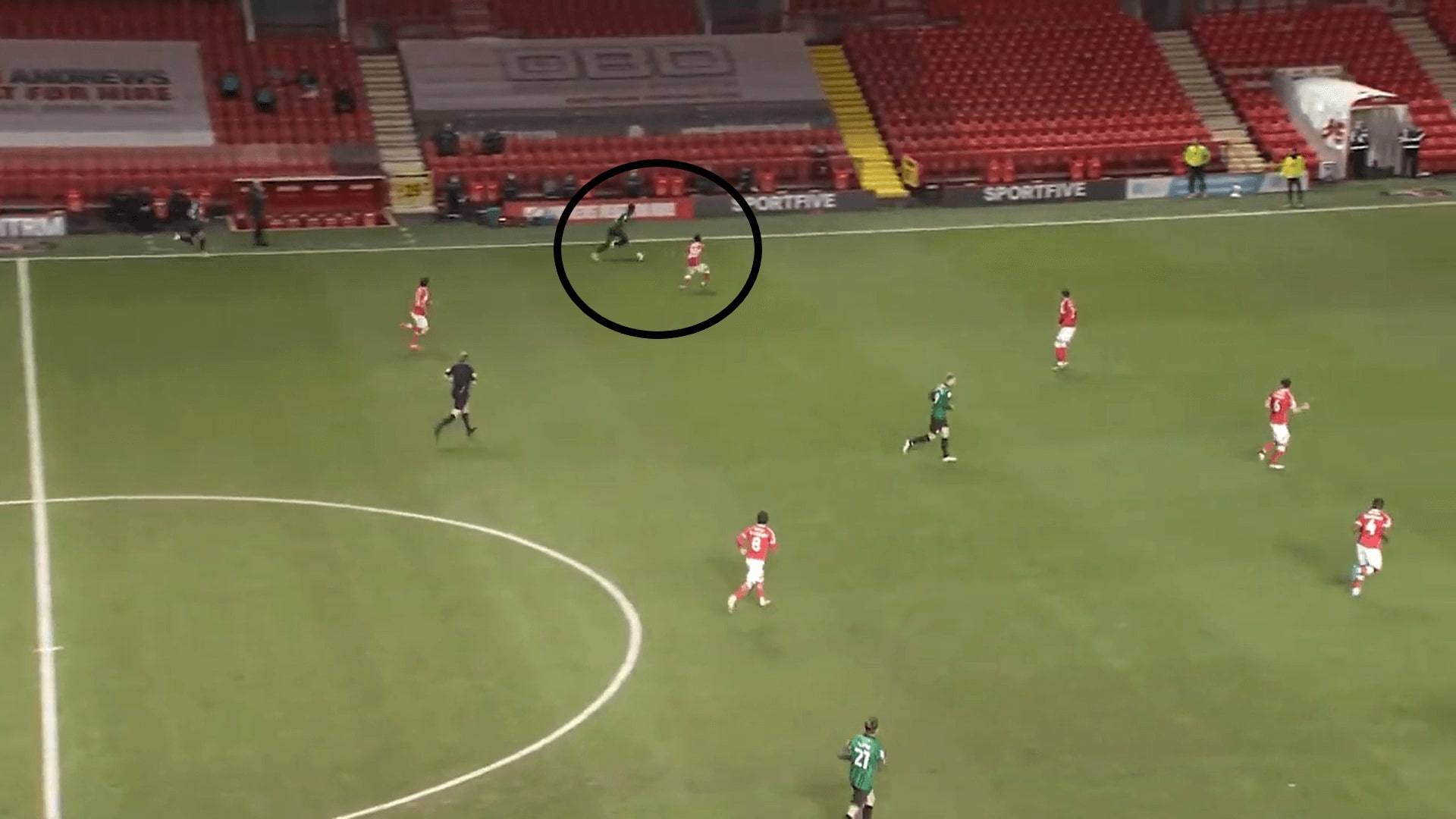 In terms of dribbling itself, pace and technique are only the basics. The best dribblers in the world also have a good understanding of situations – where the space is and when to try and beat their opponent – and in this regard, Baah definitely has some potential which can be honed to make him even more effective.

Baah is very good at the basics, and thus his team have been happy to leave him out wide alone. The first image shows him charging forward with the right-back retreating. However, the 18-year-old knew that this was not the moment to accelerate as the defender was fully prepared as well, even though he was quicker, the margin would be tight. 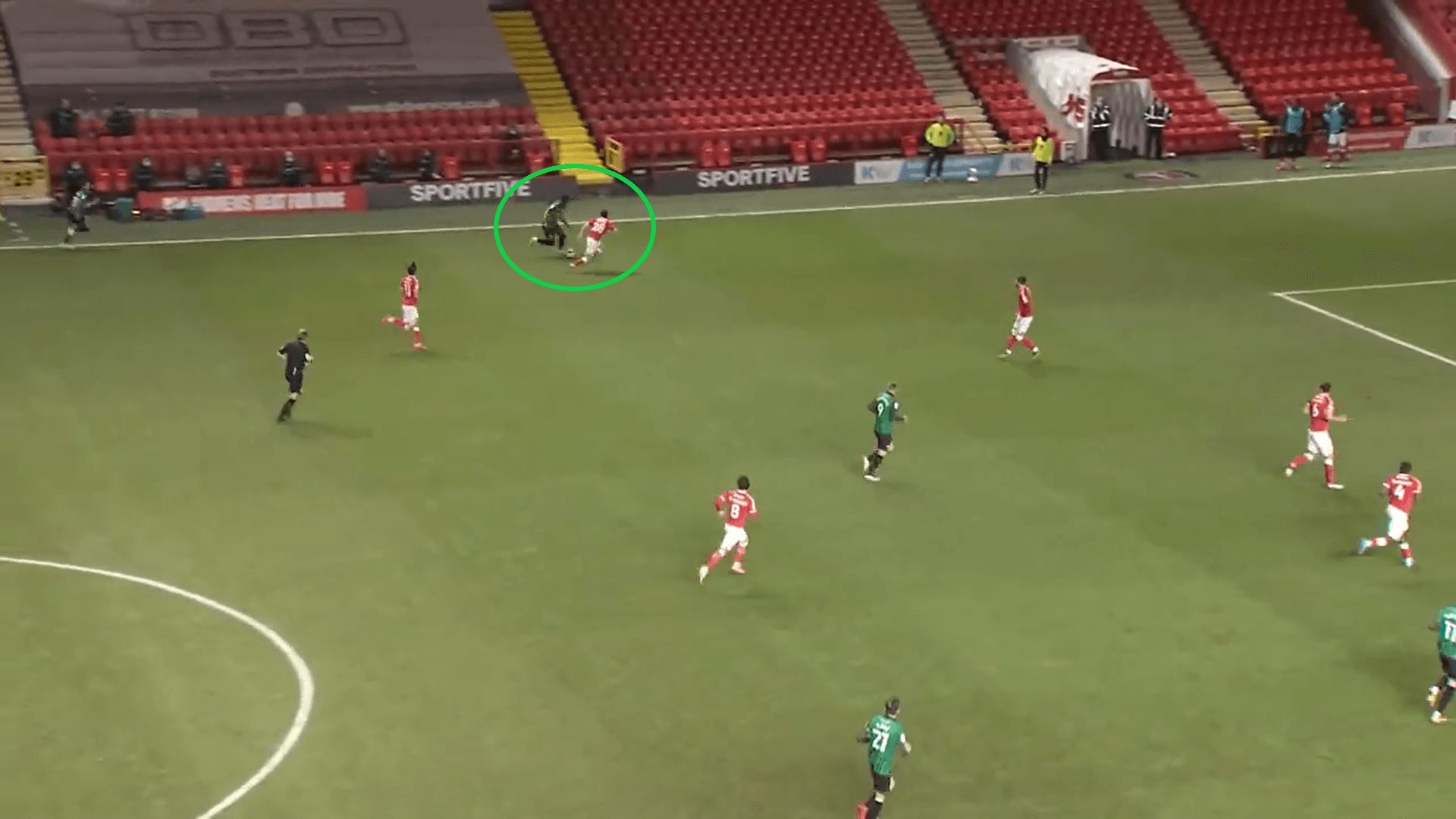 Therefore, Baah’s decision was to slow down a bit, and more importantly, dribble towards the defender. This would force the right-back to engage him, creating space behind him.

When Baah slowed down, the defender needed to adjust his pace to avoid overcommitting himself. We can see that the winger was in control of the whole situation, taking the initiative as always. 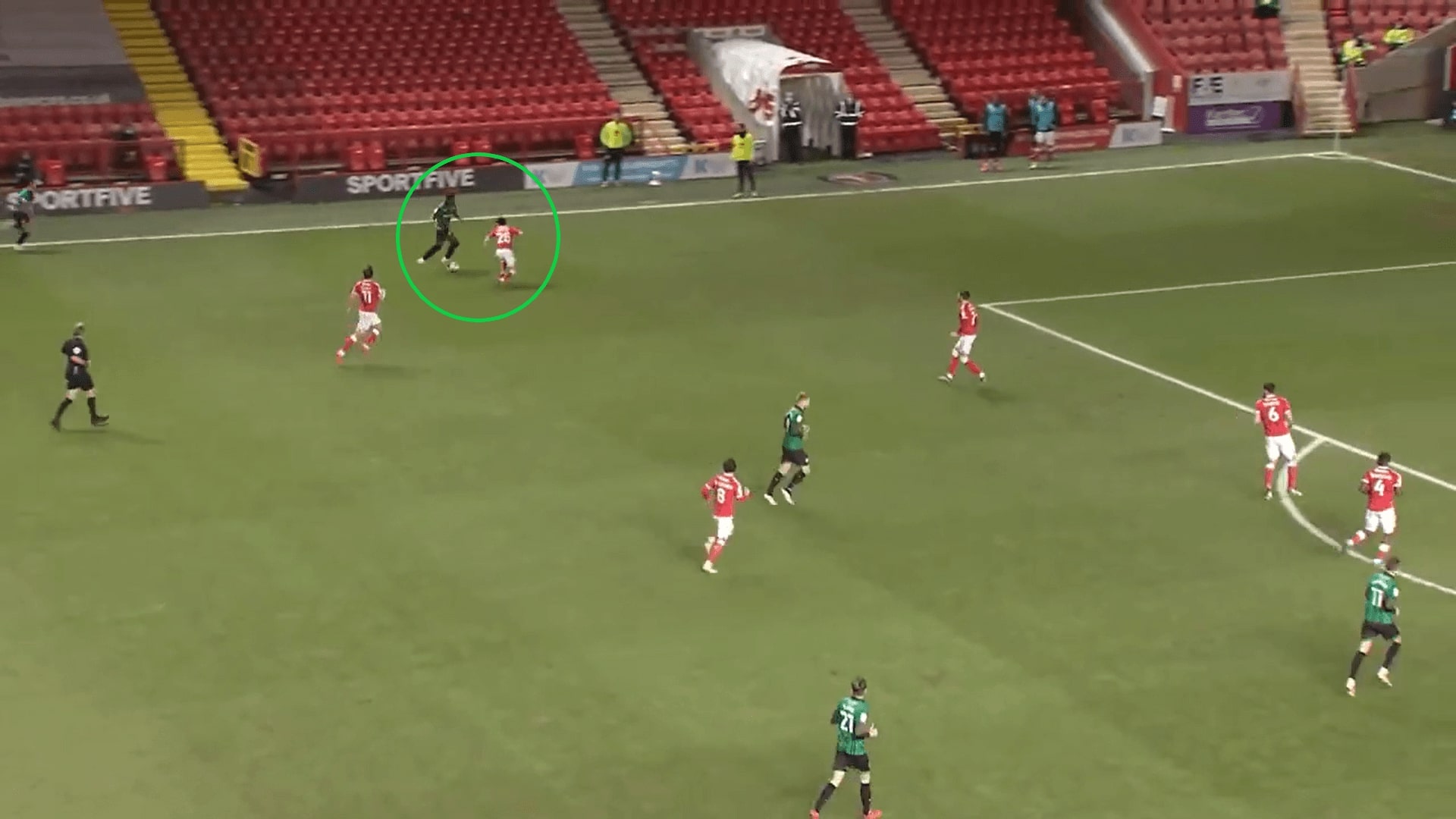 And the last image above shows the final action that makes Baah go past the defender. Since Baah slowed down, the defender also needed to reduce his speed, and through a small shift on the ball, the defender was forced to adjust his body a bit.

At the moment when the right-back was off-balance, Baah knew this was the best moment to accelerate and get past him, and with his pace, there was no way to catch up to him.

A more important point is: can Baah uses his strength (dribbling) to advance the ball for his team? To address this question, we compared some progressive metrics to see what he has offered in League One this season.

The above scatter chart shows progressive runs per 90 and progressive passes per 90 for League One wingers in 2020-21, which makes Baah’s style of play quite clear.

In terms of progressive runs, he is better than most wingers, with 4.51 such runs putting him in second place in our data. However, using passes to move the ball forward is not his strength – 0.83 progressive passes per 90 is lower than most players on the chart.

Lastly, what can we expect from Baah’s dribbling? From this chart with offensive duels per 90 and fouls suffered per 90, we can see that Baah is far better than any other player in the league.

He has 21.73 offensive duels per 90, showing his aggressiveness on the ball, and he is never afraid to challenge an opponent. Further, he would be a great asset to teams that prefer to attack via set-pieces, due to his high fouls suffered per 90, which is at 3.44, the highest in this set of players. 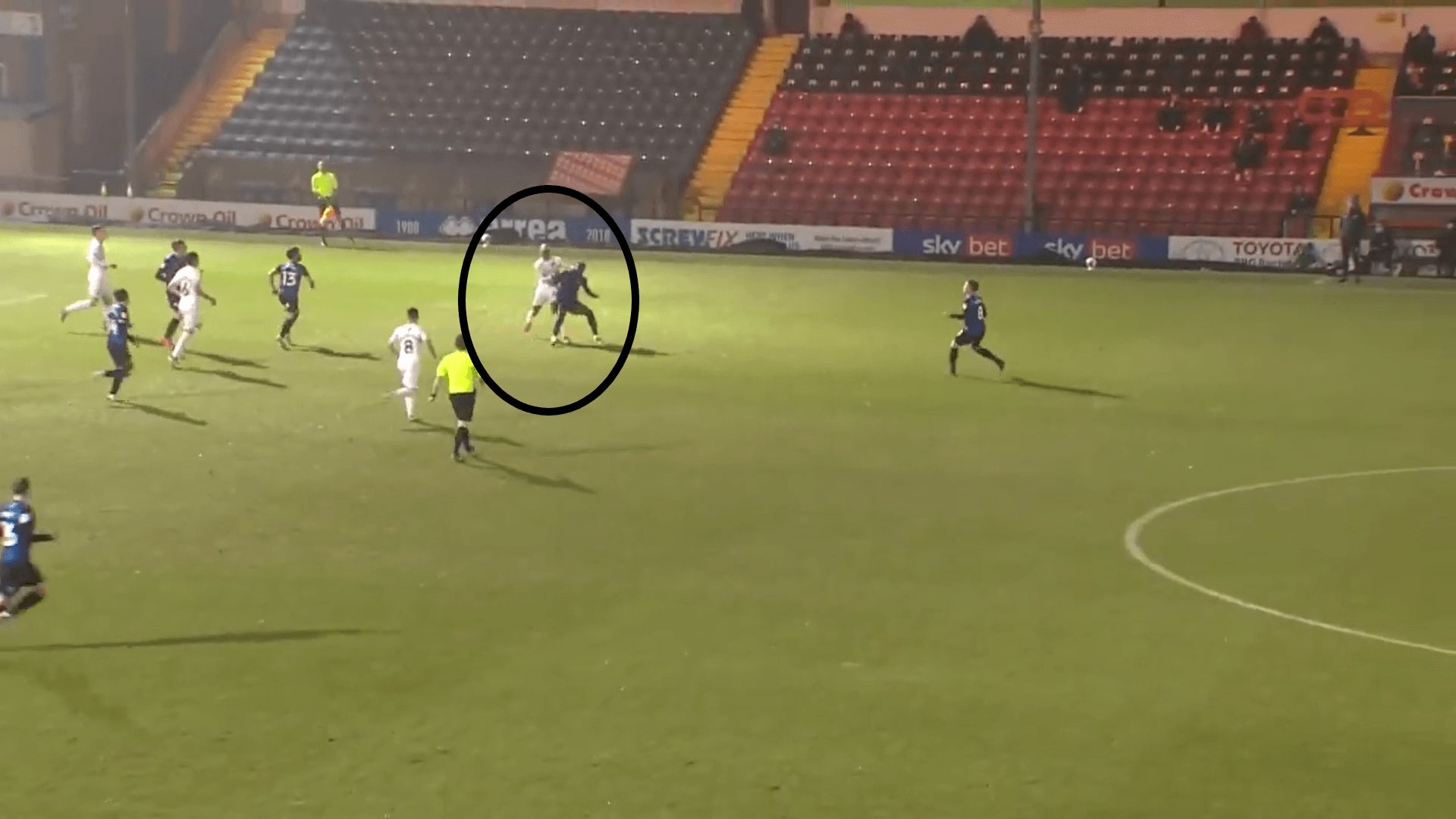 Potential development in the final third

As a winger, Baah will always show up in the final third, therefore, his performance in this area is a key standard to evaluate his performance. Can he deliver the ball into the penalty box, and what would he offer in the box, are the questions to address.

The above image shows all penalty area deliveries by Baah this season, by category (pass, cross, and carry). His preferred behaviour is to carry the ball himself into the box, as shown above. Rarely does he pass into the box, and the number of crosses is not high as well.

This suggests his style of play is more like that of Bayern Munich legend, Arjen Robben, who liked to cut inside, going to the penalty box instead of the byline. 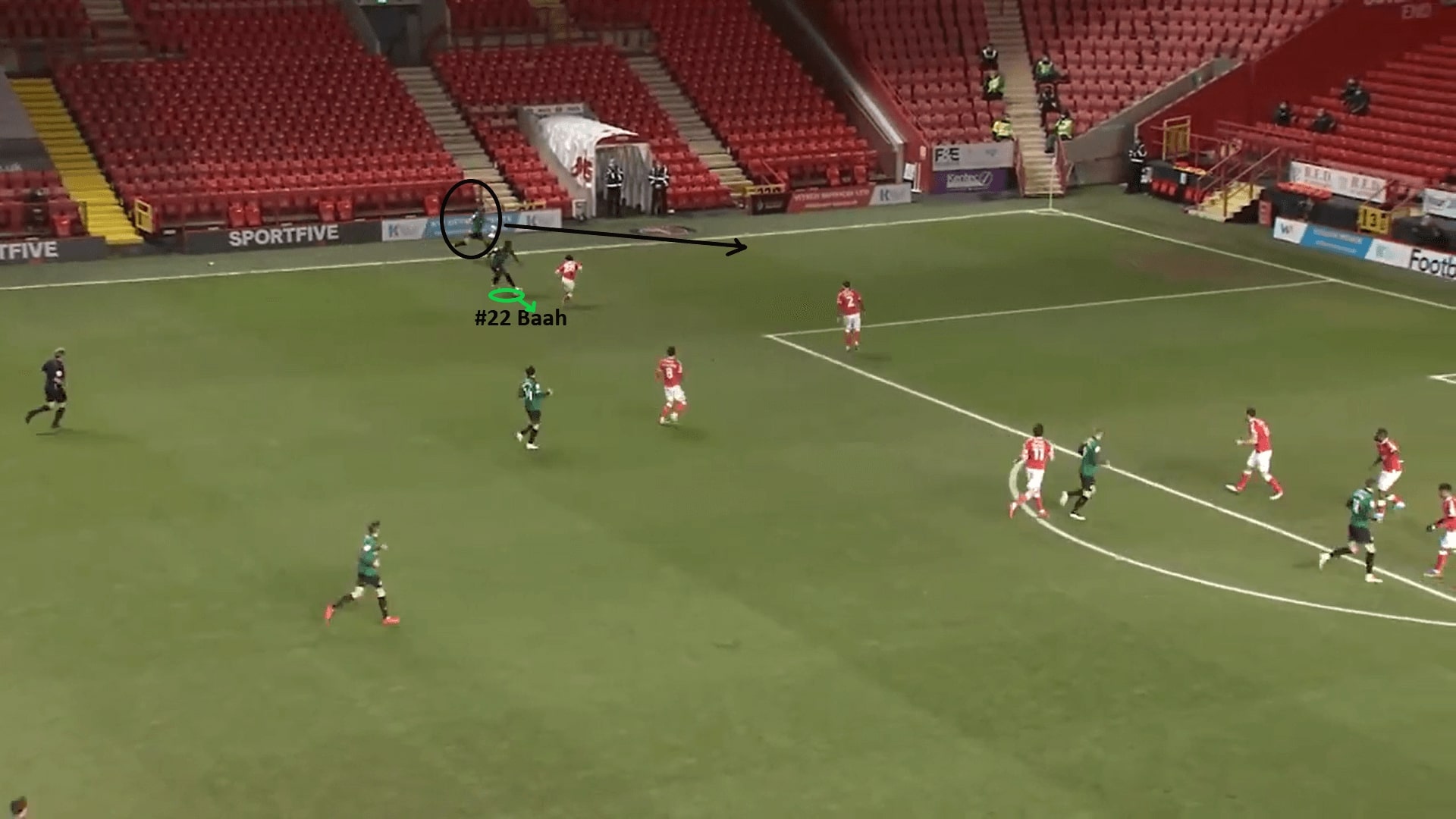 At Rochdale, the left-back would support him out wide to allow Baah to move inside. At the right moment, they could create a 2v1 situation on the right-back, overloading him and this defender would thus have a dilemma as to who to follow.

Even in 1v1 situations, Baah is strong. In a 2v1, he could probably do whatever he wants. The above image shows how the left-back helped Baah, allowing him to go inside and look for shooting opportunities.

Baah’s threat to goal is a peculiar one, which has had a weird pattern.

Baah’s xG per 90 is higher than mean at 0.15, which is quite good. His shots per 90 is at 1.9o, also slightly above the average as well. Considering that both metrics were just a little higher than the average, it seems as though Baah is not a winger who will always shoot from a promising position.

The above shot map of the player proves this further. Most of Baah’s shots came from the left half-space in the box, and three of them found the back of the net, although some others were not on target. Not many players can score from this area, however, and Baah seems to have the talent to do so.

He also shoots on occasion from outside the penalty box, with just two of those shots being off-target. When he shoots, he shoots with power, and this should allow him to net a few strikes from these sort of areas in his career.

The image above shows the placement of Baah’s shots. It is quite impressive as this shows a decent ability to find the areas where keepers would be hard-pressed to make a save. He managed to locate the top corner with two efforts, while his intention to try and find the corners when possible can be seen by the number of efforts that went wide of either post, as well as over the bar.

These shows that Baah is an ambitious offensive player when he goes for goal. He has three goals at Rochdale so far this season, and is capable of finding more.

Therefore, it will be very interesting to see how Baah performs when he plays closer to goal. So far, he rarely shoots from promising positions, and rarely receives high-quality opportunities. However, his shooting techniques is good. If he plays a bit more narrow, maybe we can expect more goals from him.

The 18-year-old’s skill-set allows him to thrive when playing out wide, but he also has the potential to play as a central striker, making him a versatile young player and allowing him to fit into different roles and tactics as the need may be.

Since Rochdale are not a team that presses very high, Baah’s defensive duties have not been too onerous. He has not been required to stay very deep or to  track the opposition full-back closely.  Rather, he has usually been asked to stay higher up the pitch and gamble on opportunities to counter-attack falling his way when opposition moves break down. 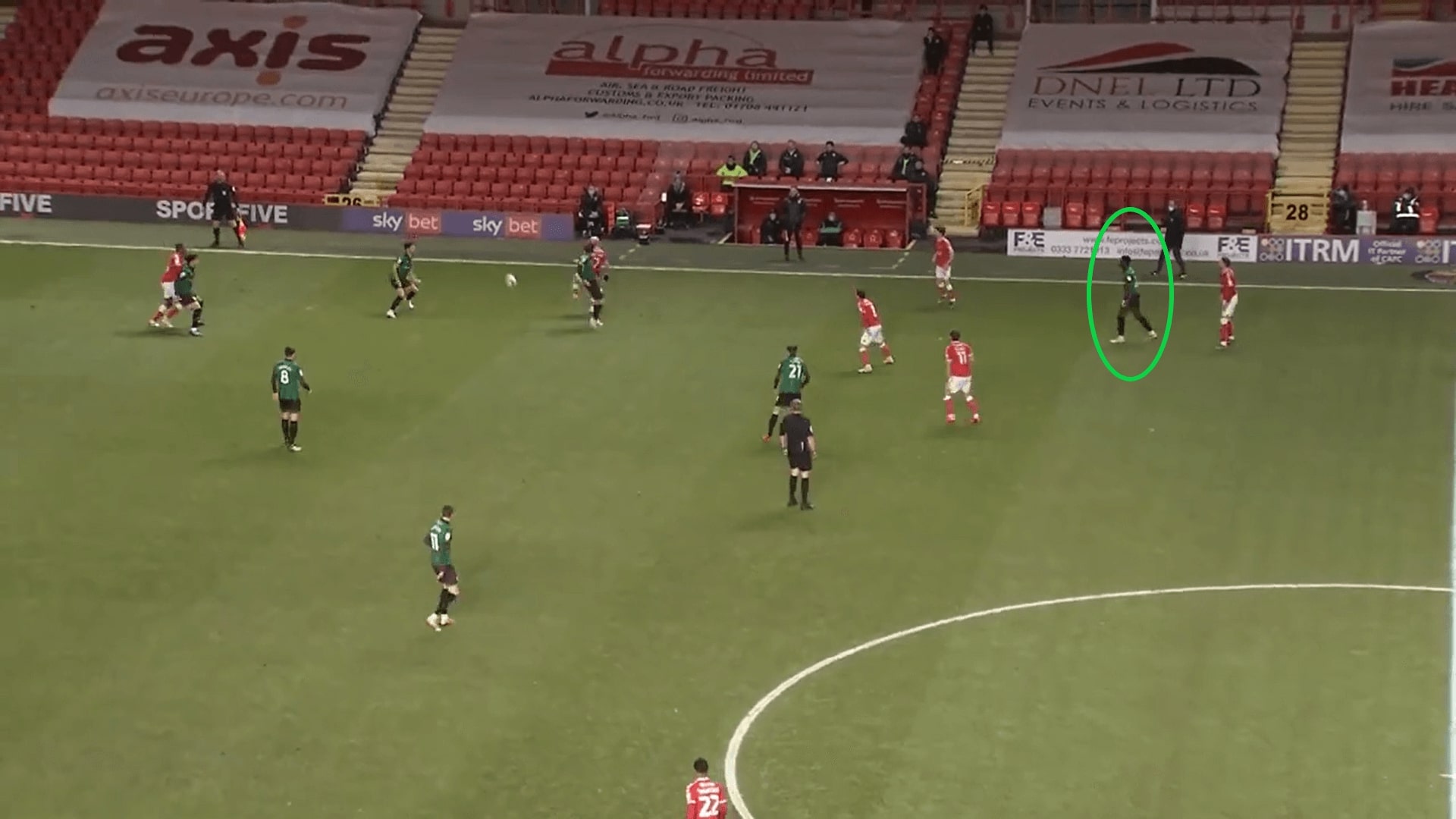 In addition, his high positioning could pin the opposition full-back, easing pressure out wide.

The image shows this positioning from the 18-year-old, where he is positioned even higher than the striker.

Kwadwo Baah is a very talented player, as can be seen by his understanding of space and timing during 1v1s. There are many young and quick wingers out there, but not too many who have this sense for slowing the game down when needed, before bursting into space. Of course, he has to work a lot more on different aspects, such as fitting into pressing systems and other tactics, before we can consider him anywhere close to being ready to feature for City. It will nevertheless be a good step up for him, and if he can develop further at City, he could feature in the Premier League in the near future.