Thomas Tuchel is working on filling the gaps in Chelsea’s squad after a turbulent last few months being concerned about their future and the new ownership. However, it looks like everything turned out well for the club and they are now looking for new additions to join their ambitious team.

After sending out Romelu Lukaku on loan to Internazionale and letting go of Antonio Rüdiger and Andreas Christensen to Real Madrid and Barcelona respectively, they needed to find replacements that could meet the expectations and help the team in competing in the domestic and European cups in the 2022/23 season.

The Blues already introduced Raheem Sterling as the new face in the attack, but they have secured a replacement at the back as well. The new addition to Chelsea’s defensive line is Kalidou Koulibaly who joins them from Napoli.

The 31-year-old had proven to be a key figure for the Italian side, and his experience will certainly help the Londoners minimise the impact of Rüdiger and Christensen’s departures.

In this scout report, we use tactical analysis to examine how Koulibaly’s style of play and strengths could fit Tuchel’s tactics and explain why the club paid €38 million to bring him to Stamford Bridge.

Why did Chelsea need a central defender?

Chelsea’s need for a centre-back was underlined with the departure of their regular starter Rüdiger. While the German had his flaws, he turned into one of the leaders of the team in the last few years and an irreplaceable part of the starting eleven.

He fulfilled the team’s need for a ball-playing defender and supported the side both in and out of possession. That’s why his departure, along with his teammate Christensen, left a gap in Chelsea’s defence due to the limited number of players who can meet the requirements for this role.

The Blues needed a player with composure who can comfortably retain possession at the back but also have the positional and spatial awareness to bypass pressure and help with ball progression, must-haves that Tuchel’s back-three formation and philosophy cannot function without.

While Koulibaly has played in a four-man defensive line for most of his spell at Napoli, he does possess the qualities Chelsea were looking for.

The role doesn’t require only contributing in possession, of course, as the importance of the defensive actions in a back-three is immense and the Blues needed a player who has increased awareness and ability to step up during transitions.

The Senegalese’s contribution in possession is beneficial for the team in many aspects. The combination of his short and long passing will allow the team to retain possession at the back but also help them progress the ball by finding spaces and bypassing the press.

While at Napoli, he was required to sit a bit deeper than he will be expected to at Chelsea, his long-range passes would often aim to reach the final third and find the attackers directly by dismissing the first two lines of defence. His long balls frequently threaten the opposition and set his teammates up in quality positions where they can create goalscoring opportunities.

Koulibaly’s composure not only helps him in getting the ball out of defence but also in sending accurate passes despite the opposition’s press. He would use long balls to either spread the ball out to the wingers or to break the lines through the central areas equally well.

Considering Napoli’s and Chelsea’s similarities in terms of pass frequency and pass distribution, it is expected that he could fit well into the new system and meet the expectations.

The Senegalese does split his responsibilities well and contributes actively to the team’s defensive actions, whether it is with direct interventions or by pressing. His movement will help Chelsea to avoid being vulnerable due to their attacking style of play and advanced position in possession.

Although he will be seen moving closer to the central line, his awareness will allow him to drop back in a timely manner, while his high success rate in defensive duels would most certainly be beneficial for the team, especially against sides that will try to expose them on a counter.

He covers depth rather frequently and is always aware when his teammates are out of position and he needs to close out space. That could be key for the Blues, especially in terms of avoiding individual errors and harsh actions by his teammates. Chelsea were fourth in Premier League last season in terms of fouls committed per 90, which have resulted in them conceding six penalties in the league. Koulibaly’s experience could help them minimise those mistakes.

Another way the 31-year-old could support the Londoners’ actions out of possession is with his ball recoveries. His constant efforts to win back possession and stop the opposition from reaching quality positions could increase Chelsea’s defensive efficiency noticeably.

As Koulibaly is seen as a replacement for Rüdiger, we compared their data to point out the similarities and differences in their performance. The difference in the team’s strategies and the formations should be considered as well, that’s why we look at the numbers only to get an idea of whether or not both are interchangeable.

Firstly, we compared their actions in possession, and more particularly their passing contributions. As the chart shows, while they do have similar numbers per 90, Rüdiger has had a bigger impact on the final third actions. The reason behind that is that the back-three role and the team’s advanced positioning in possession have required him to frequently move closer to the central line and break lines with his passes, whether it is long balls behind the defence or passes to the final third.

Nevertheless, both Napoli and Chelsea have similarities in their pass frequency and counter-attacking actions, which makes the German’s higher number of passes per 90 stand out. However, looking closely at the chart, we can explain his more significant contribution with his lower impact in defence.

Koulibaly has better numbers defensively, which is underlined the most by the percentile of his won defensive duels. His 69.7%, combined with the lower number of losses per game, shows that he is more reliable under pressure and could have a positive impact on the Londoners’ defensive performance. He has been more active in his ball recovery efforts as well and has averaged a higher number of aerial duels.

His defensive impact explains the lower numbers in possession, but also underlines his ability to split his responsibilities well, which will be crucial for Chelsea.

As our analysis shows, the 31-year-old Koulibaly seems to meet the requirements for the Blues’ centre-back role. His composure and intuition in possession will be crucial for Chelsea to continue to dominate possession over their opponents. His defensive performance, on the other side, could minimise the number of errors at the back and lower the opposition’s efficiency in front of the goal. 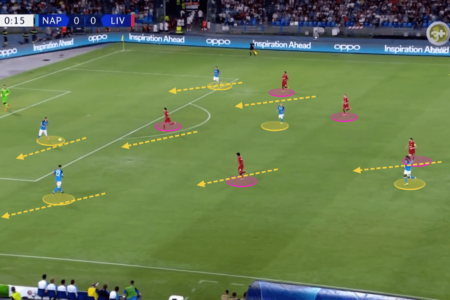