Garang Kuol has just had his move to Newcastle United and the Premier League confirmed. The 18-year-old Australian has had a quick rise through his footballing journey, attracting interest from Celtic and Borussia Dortmund. He has also just recently made his international debut for the Socceroos in a friendly against New Zealand. The forward will join Newcastle once the January transfer market opens.

Having only made his A-League debut in April of this year, it has been an impressive feat to earn an international call-up and a move to England. Kuol has racked up an impressive record given his low number of minutes for the Central Coast Mariners. He has amassed 4 goals and provided 1 assist in close to 250 minutes of league football.

The vast majority of his appearances have been from the substitutes bench where he was able to come on and impact the game. His goal tally certainly shows that he knows where the net is. He also displayed an impressive cameo for the A-League All-Stars against Barcelona, where he gained some social media coverage.

This scout report will provide a tactical analysis of Garang Kuol and how he is utilised as an impactful substitute. It will also be an analysis of the tactics used which have allowed him to flourish.

Kuol is very much an attacking player. His minutes in the A-League have come mostly on the right-hand side of midfield. The Mariners play a 4-4-2 formation with Kuol occupying the right midfield or left midfield. He has also featured as a striker in a game against Newcastle Jets.

He is 5’9” tall and weighs 68kg making him quite stocky. This bodes well as he is not the tallest but is able to use his body weight to protect the ball and go shoulder to shoulder with opponents.

Below is the heatmap for the young forward. His map shows his range of positions as the right-hand side is slightly denser but overall he has coverage across the full frontline. His ability to play in multiple positions adds value as he will be able to adapt and fit into systems easier. Predominantly Kuol is right-footed but he is comfortable on either foot. 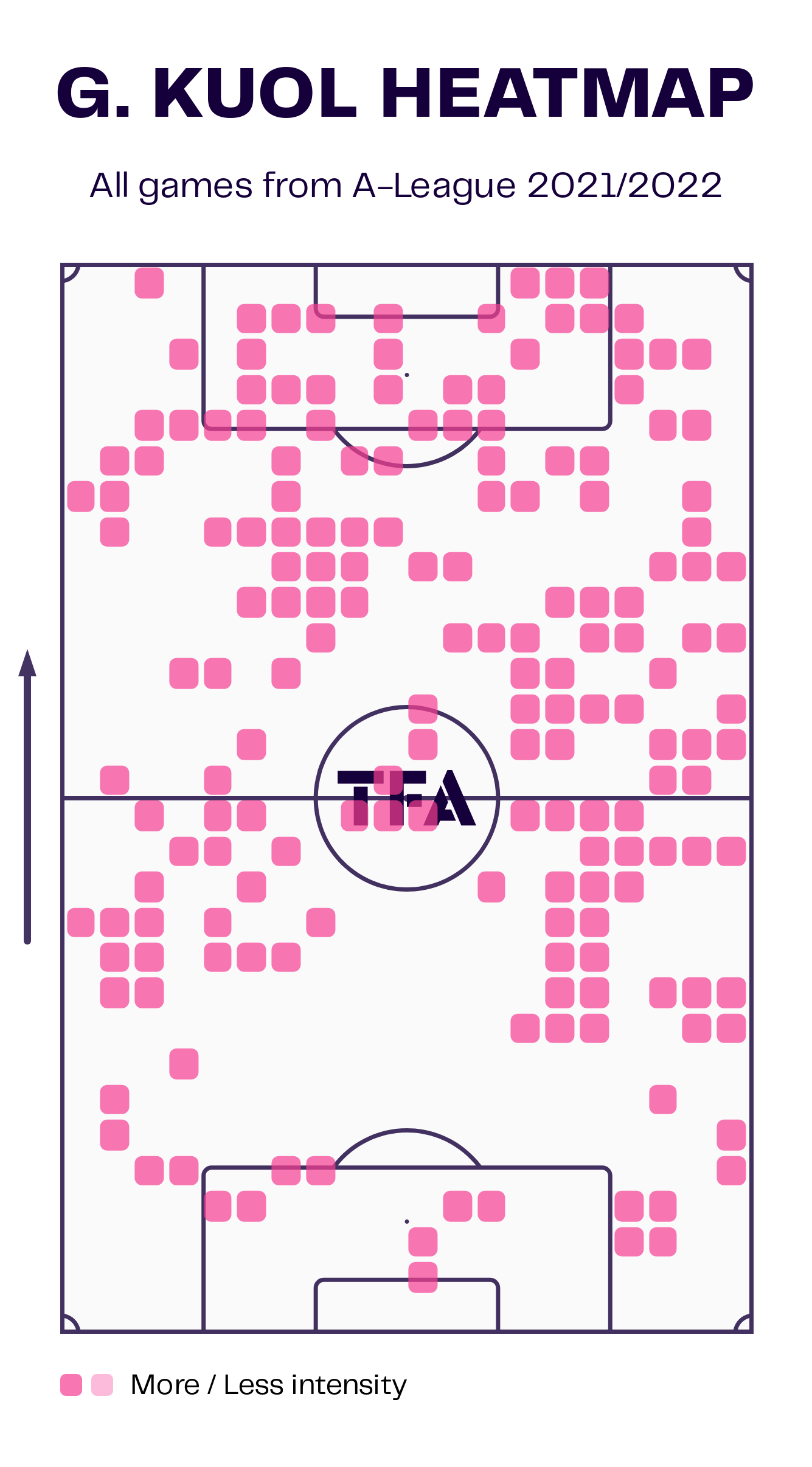 The modern-day winger is expected to be able to carry the ball at his feet comfortably and create chances in the wide area. This could be through dribbling 1 versus 1 or creating chances via crossing the ball.

With the ball at his feet, Kuol is very confident and quick. He looks to be as direct as possible and is not afraid of trying to beat a man with a dribble. Below is an example of how he takes on an opponent by exploiting the space behind them. For someone so young and inexperienced, he has a great understanding of spacial awareness. 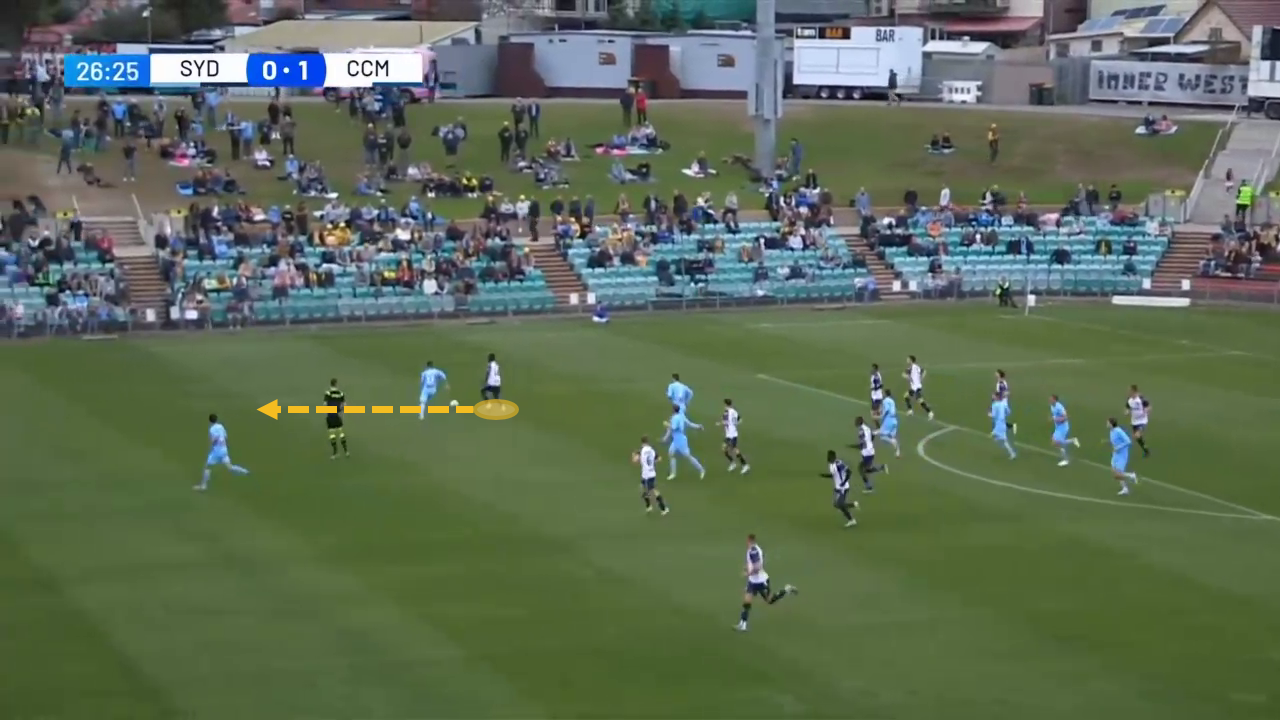 By having a good awareness of situations like above, Kuol is able to use his impressive dribbling ability to glide past opponents. For example, the situation above involved Kuol slowing down to almost walking pace, enticing the opponent in, before he exploded and accelerated away into the space.

This level of ability and skill is something that top players do. To do this at such a young age is very impressive. An important skill to have and it will lend itself well to drawing fouls when Kuol finds himself in more difficult situations.

Not only is he a threat when picking the ball up with acres ahead of him, but he is also able to use his dribbling ability to punish opposition players centrally. He is confident in drifting in off the wing and picking the ball up in more dangerous positions, such as the one below. 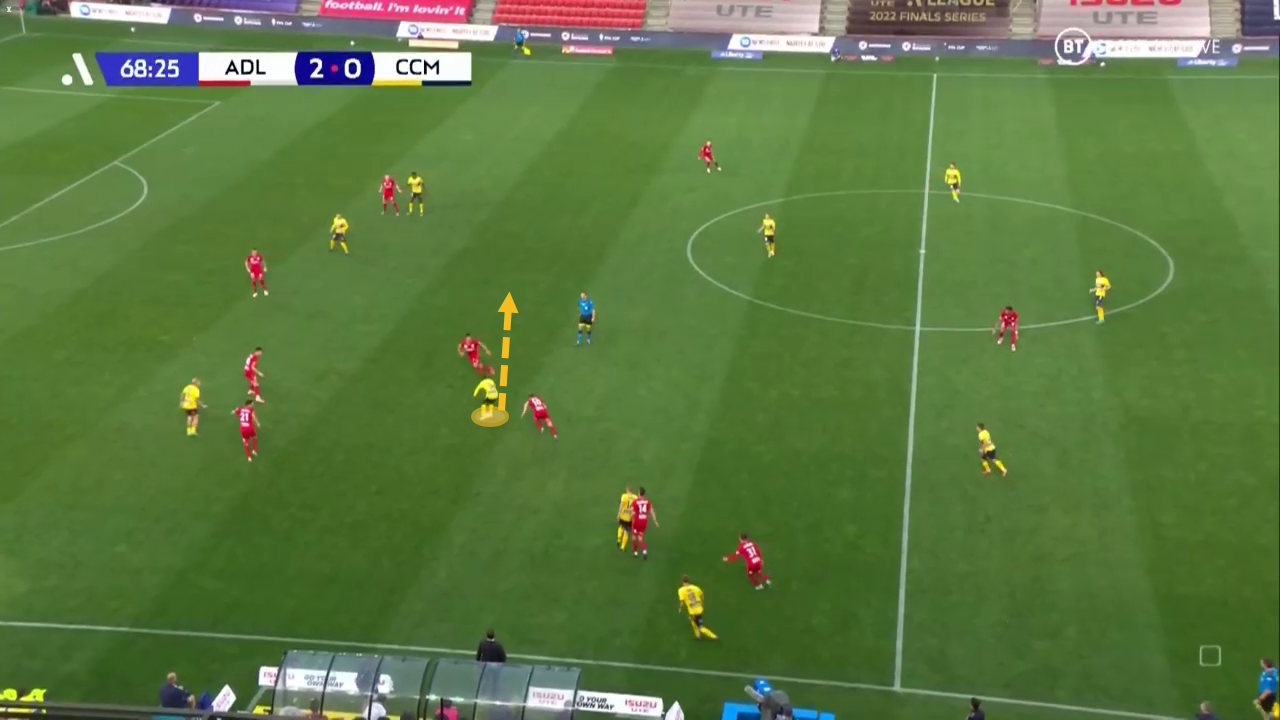 Kuol notices the space in the central area and drives inside his opponent to exploit this space. By doing this, he creates uncertainty and panic amongst opposition defenders because he is in a position of danger. If he can execute a good through pass then a goal-scoring opportunity is likely.

The Australian is so direct and that is highlighted in the above example as he could have easily passed the ball on to a teammate but instead chooses to take the ball at his feet infield to try and create a chance.

When in the final third Kuol is able to work positions for himself in which he can try to provide an assist. This can be through crossing the ball or cutting the ball back to the edge of the box.

Kuol uses a number of techniques to cross the ball but his most common is a floated cross to the back post. This technique is utilised a lot because of the crossing positions Kuol finds himself in. They often occur once he has beaten a man 1 versus 1 or created just a small amount of space.

The below example shows how he shifts the ball onto his weaker left foot before floating a ball perfectly to his teammate in the black. His low centre of gravity and change of pace allows him to create space easily for a cross. 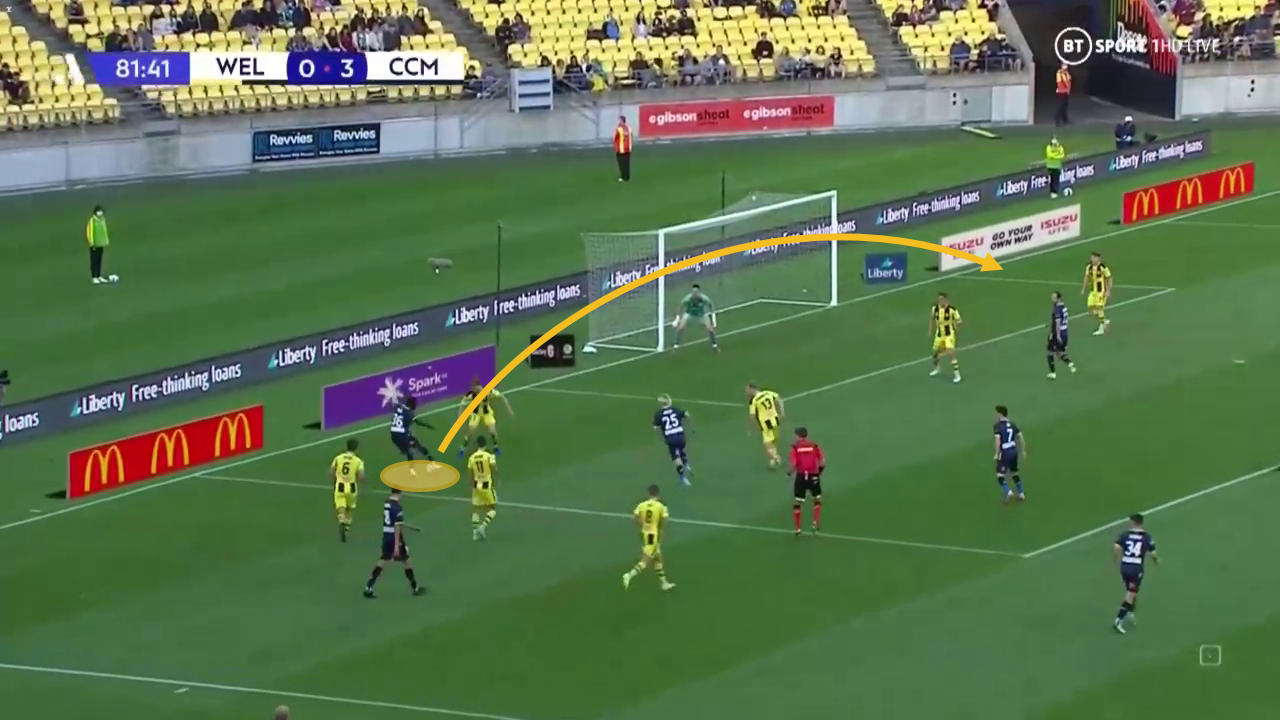 To be able to manipulate opponents, space and the ball like this makes Kuol an exciting winger in wide areas. He has a good output from positions like this providing a number of opportunities from crosses.

With the ball at his feet Kuol is a threat. Not only is he great at dribbling he is also effective and impressive in keeping the ball. He uses his body well to hold off opponents and returns passes with good weight and tempo. Kuol looks to keep possession depending on the area he takes up on the pitch. 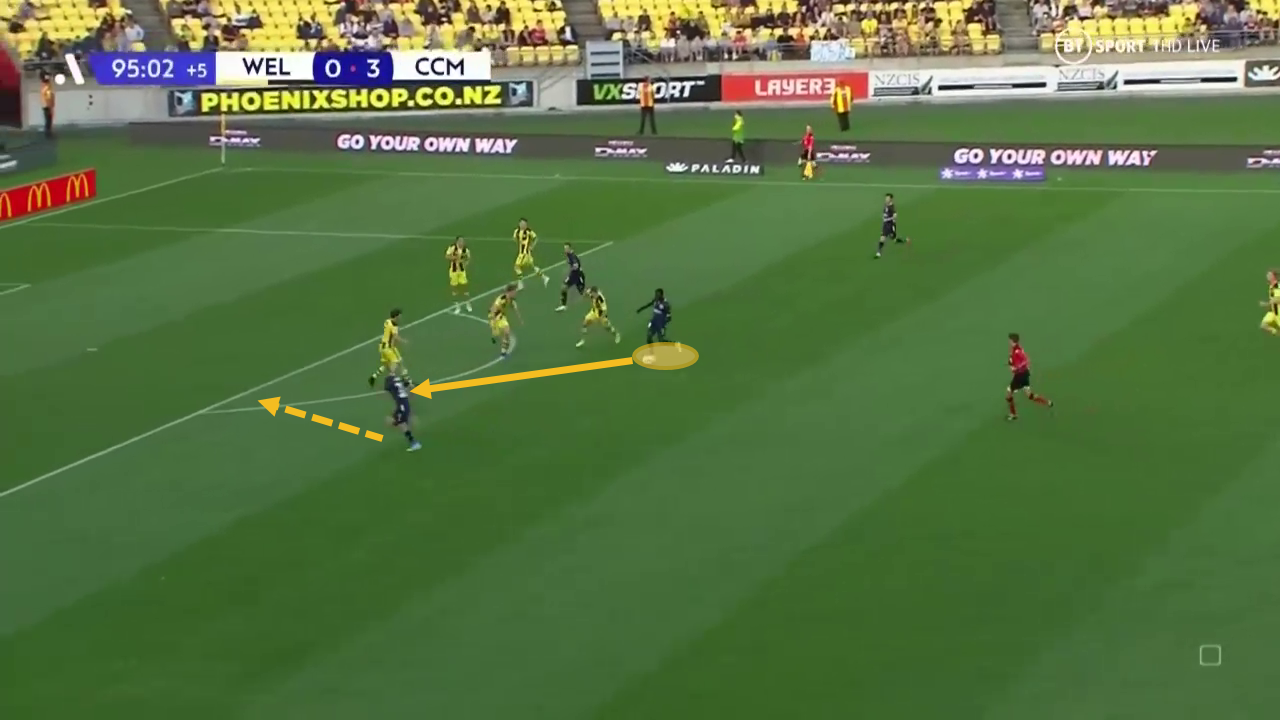 In the above image, Kuol provides an assist for his teammate. This move comes following a dribble infield from Kuol. He times the pass perfectly, waiting for his teammate to be in a prime position to score. His weight of pass allows his teammate to take the ball in his stride and finish first time.

His selflessness in this situation shows his maturity in the attack. He is aware of his surroundings and dribbles with his head up and is able to notice the oncoming run. 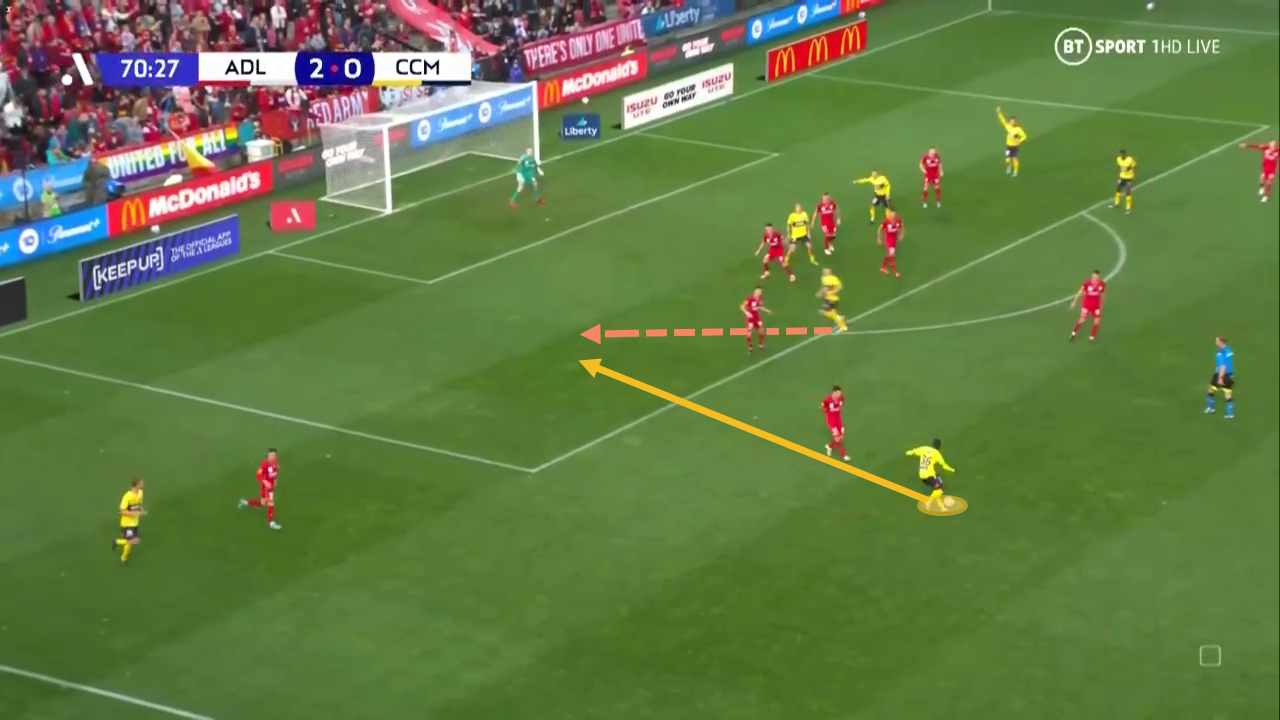 This impressive pass moves the opposition players around creating uncertainty in the final third. He then provided support to his teammate by showing as an option to pass to.

In and around the box, Kuol has finished some good chances. Below is his xG map, and as you can see Kuol is massively overperforming. This can be viewed as a negative as some might say he cannot continue to finish difficult chances, however, his confidence is high and he is finding the back of the net. 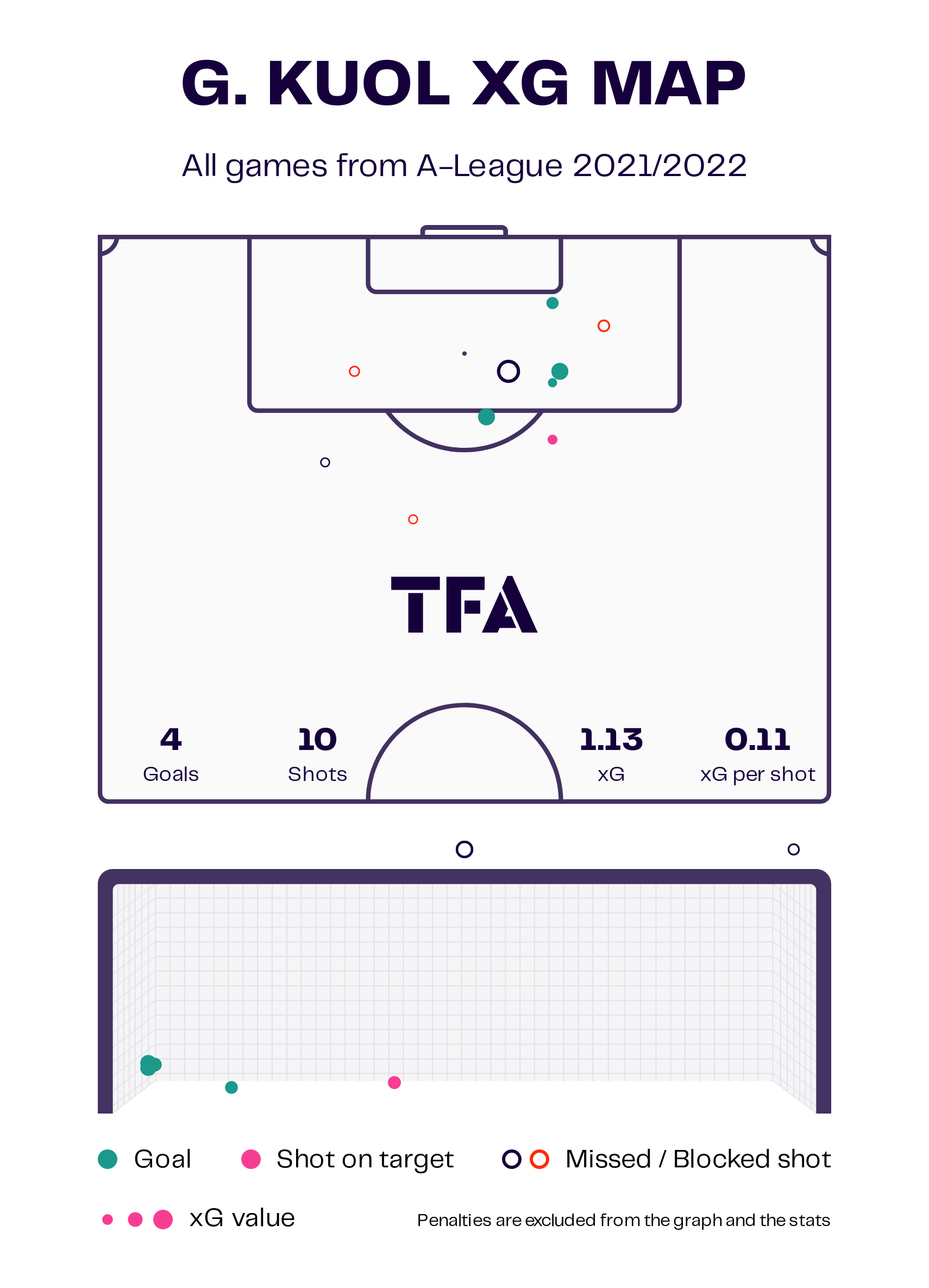 As mentioned in the section about his crossing ability, Kuol is comfortable using his left foot. His goal from outside the penalty box was scored on his supposed weaker side. He worked the space well and saw a gap which he exploited. By shooting through the crowd of players the goalkeeper was not able to react in time to make a save. 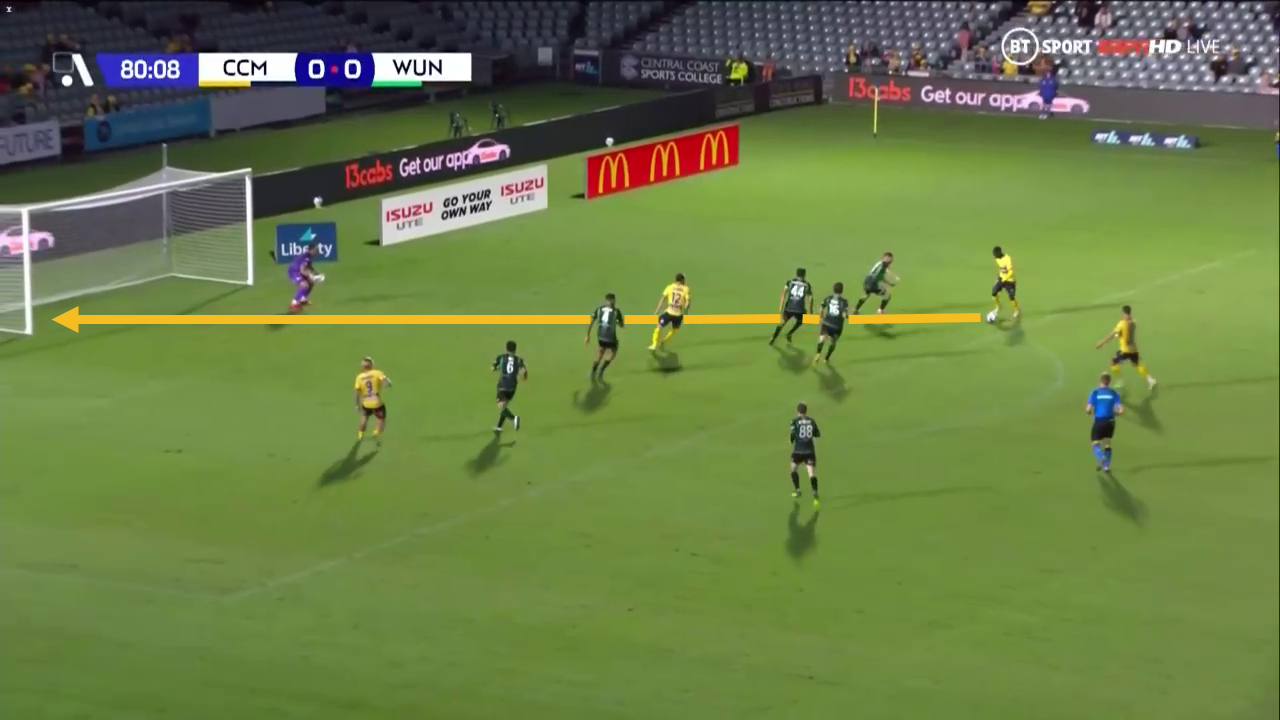 By taking the shot in this position, he scores a goal to put his team 1-0 up. Many right-footed players may have opted to take the ball outside the defender and to the byline. Kuol made a good connection, curling the ball into the bottom-left corner.

Playing mostly as a winger, it is important to build up good relationships with teammates in near contact with you. As Kuol is not the tallest player, he struggles aerially. His relationship and understanding with the strikers on his team see him get chances from situations like the one below. 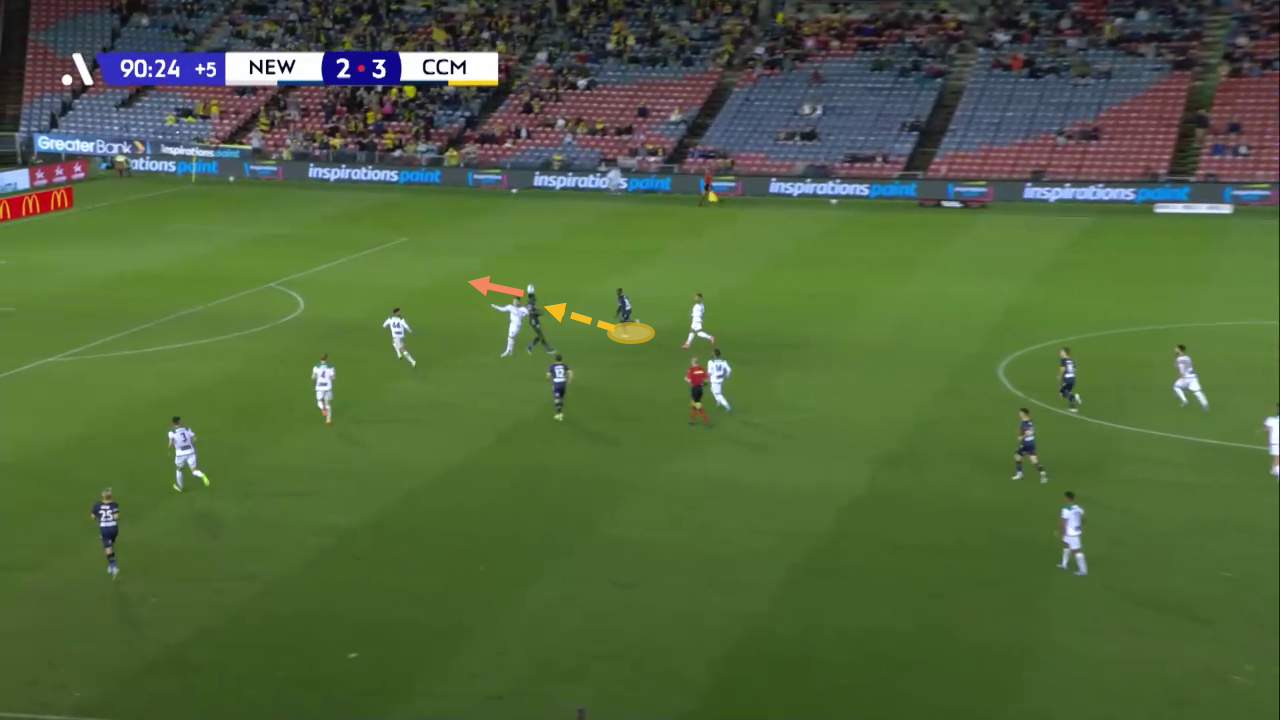 As most time on the pitch is spent without the ball, Kuol needs to be proactive in the way he acts. When he is looking to gain possession, he is alert to situations and able to make good movements to receive passes into space. Below is an example of how he scans, notices his teammate in possession and then darts into the space ahead. 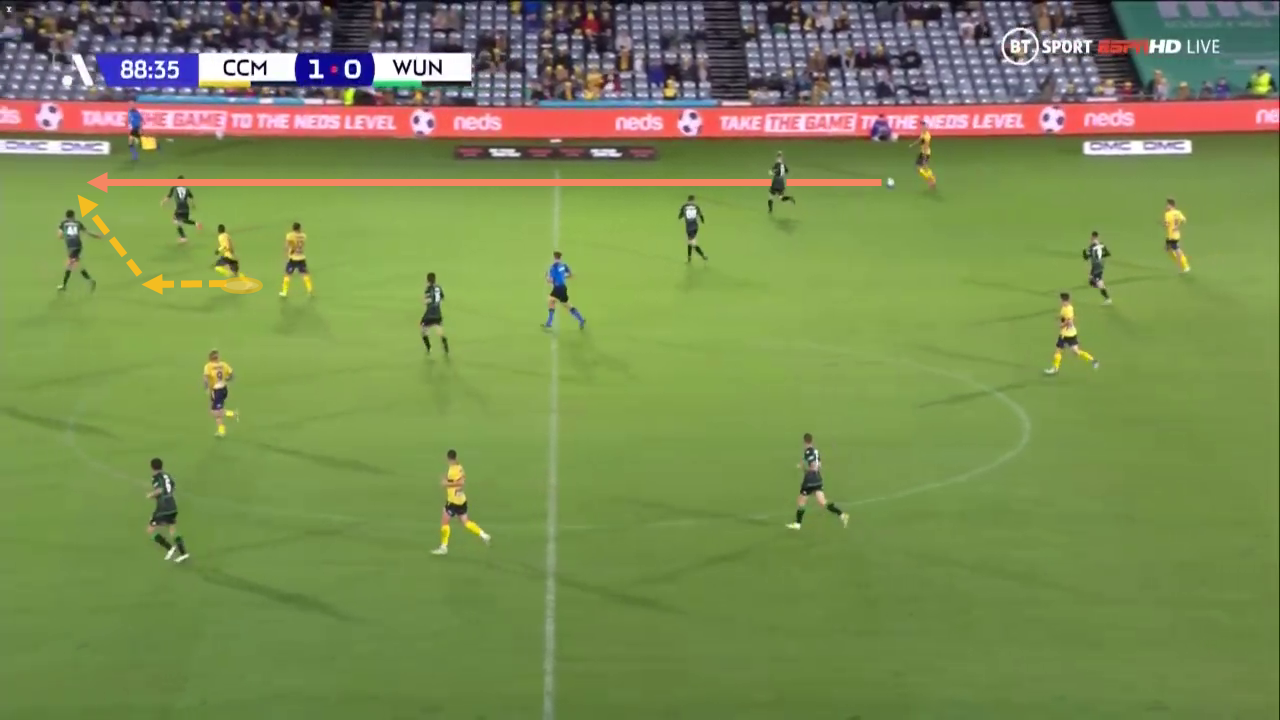 Without his team in possession, he must be disciplined in defence as he plays in a midfield unit. He works hard off the ball and is able to dispossess opponents with his surprising strength. It is important that he continues to work hard as his role as a forward is to be the first line of defence. 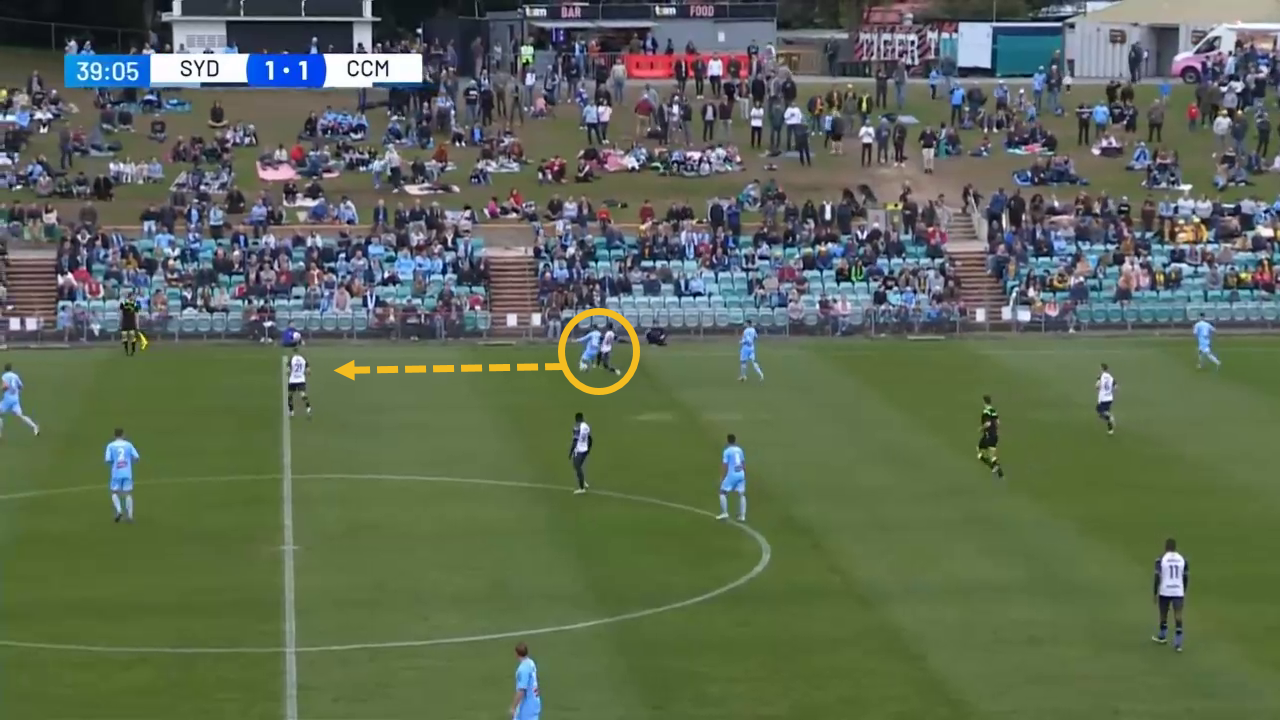 In the above example, he dispossesses his opponent before driving the ball forwards and setting his team up for a counterattack.

As he is developed and integrated into the Newcastle United team, he will be required to press more than he has in the past. He has a good awareness of defensive situations and will be easily coached into understanding styles of pressing.

Garang Kuol is an exciting Australian prospect and there is a potential for him to feature at the upcoming World Cup. With an international call-up already, it wouldn’t be a surprise if he is on the plane to Qatar.

As far as young forwards go, he is not the finished article but has shown some excellent signs of his potential. Kuol is a good signing for Newcastle and he will develop into an impressive forward player. 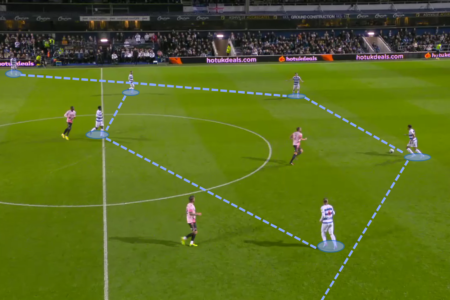 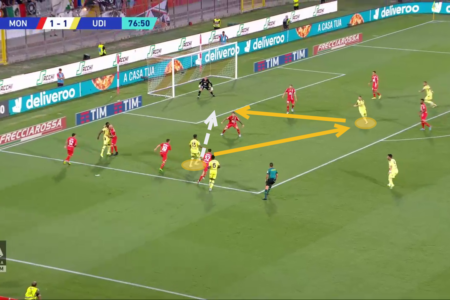 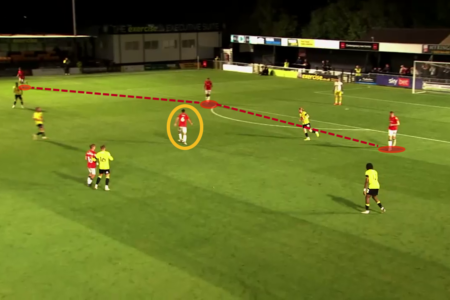