This Bundesliga season has been a considerably forgettable campaign for Augsburg. With the exceptions of a 2-2 draw against Bayern Munich and one six-match unbeaten run, the club has conceded the fourth-most goals in the German top flight, and as a result manager Martin Schmidt was sacked in early March. Despite that conceding statistic, the backline contains a number of talented individuals, including centre-back Felix Uduokhai, currently on loan from Wolfsburg. This tactical analysis scout report will examine how Uduokhai has performed this season at Augsburg.

This season Augsburg utilised a 4-4-2 formation for a majority of their matches. They average league-lows in possession(37.2%) and passes per 90. As a minimal-possession side, the common positioning tactics in this formation often prioritises defensive structure over dominance in attack. 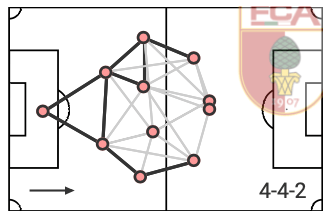 In the average positioning and passing structure for Augsburg above, we can see the defensive setup by the back six. Also, notice the slight variances in depth between the two centre-backs and the two central midfielders. Uduokhai would often rotate in occupying the more advanced and more receding centre-back positions, playing as the primary ball-oriented centre-back. In Uduokhai’s heat map below, there is a noticeable area in the wide middle third of the pitch in which the 22-year-old would progress with the ball to draw in pressing front line opposition. 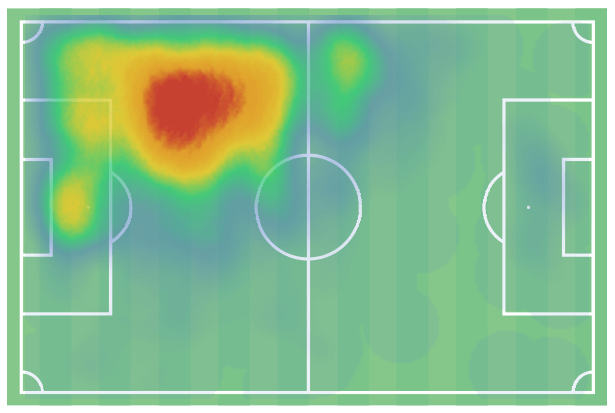 Additionally, Augsburg has the highest PPDA, or lowest pressing intensity, in the Bundesliga by a considerable margin. This lack of press allows Uduokhai to focus his positioning in defence. Below, Augsburg have taken up a defensive block setup against this Wolfsburg attack. The deeper midfielder drops into the backline, effectively creating a back five. As the cross gets delivered into the box, Uduokhai adjusts his positioning by stepping up and clearing the ball. He tallied 10 clearances in this match against his parent club. 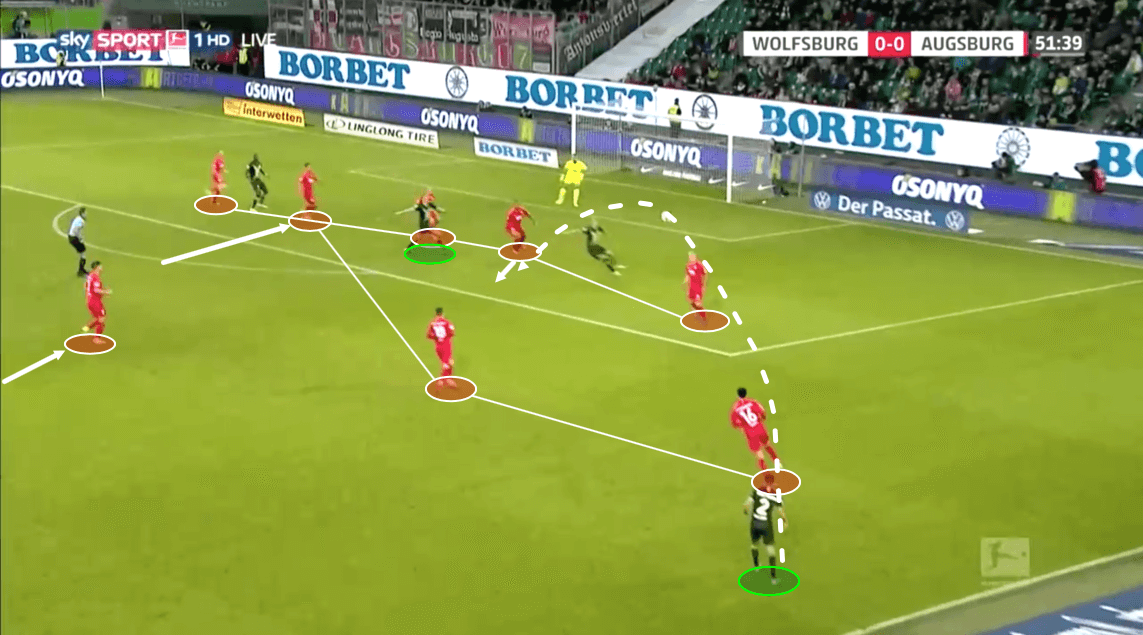 Below is another example of Uduokhai’s intelligence in positioning along the backline. As another cross comes in, this time from an RB Leipzig attacker, Uduokhai drops back and comfortably clears the ball. 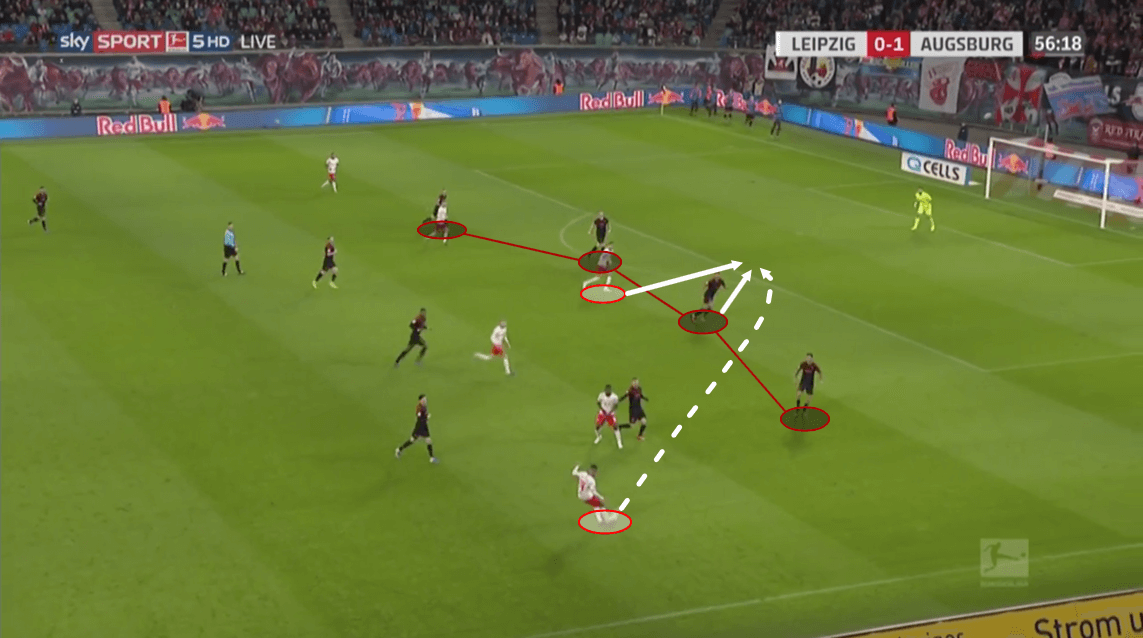 In possession, Uduokhai is often the first player to receive the ball from the keeper. As such, getting into position to receive and maintain comfortable ball control is key in progressing possession forward. In the following sequence, Uduokhai shows poise on the ball by waiting until the last moment to evade the direct front press. This gives himself space to complete the pass and allows his receiving midfield teammate as much time on the ball as possible, at least against the press from behind after a turn. 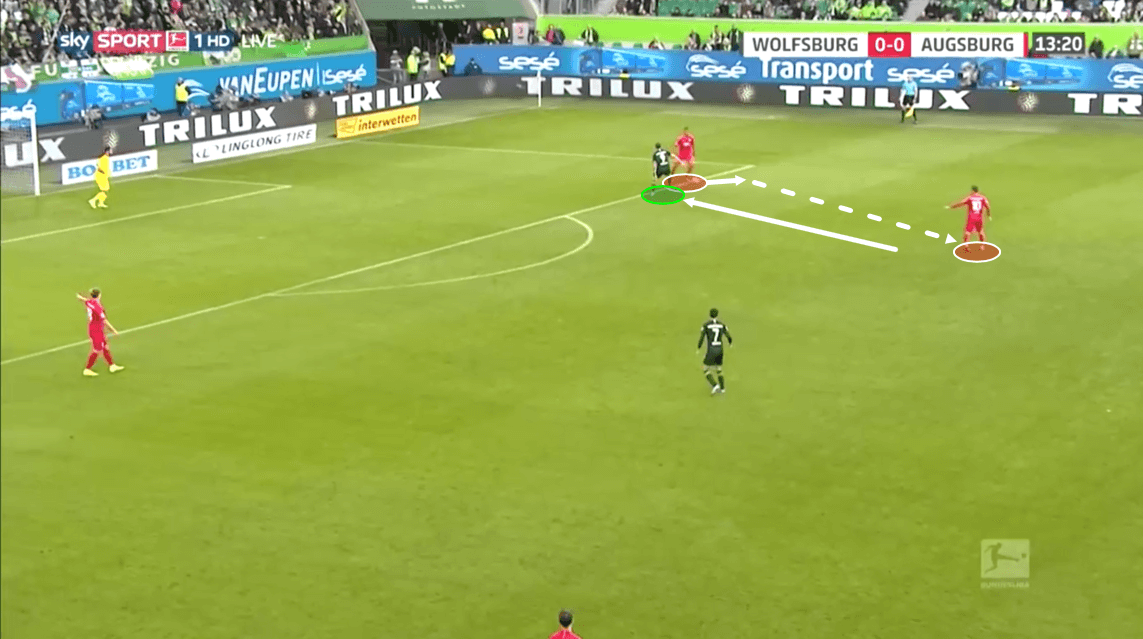 Lastly, Uduokhai is also adept at positioning his body in various situations. Below, Uduokhai intercepts a long ball by backtracking and positioning himself between the ball and the attacker. 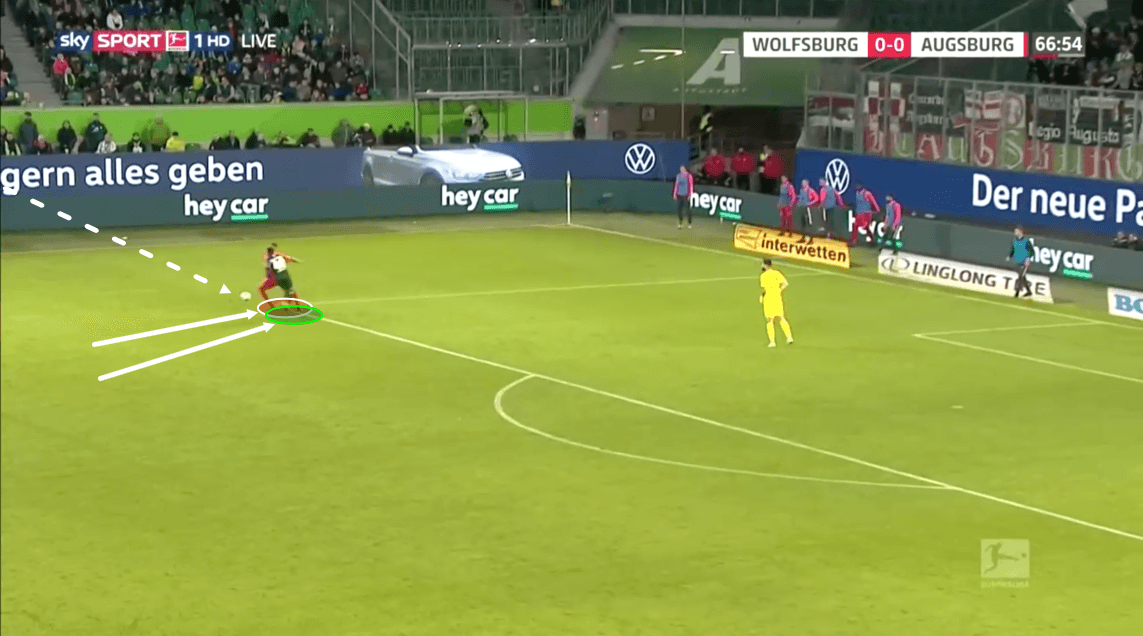 In the rare moment when an attacker does get behind the centre-back however, Uduokhai is still physically able to recover his positioning thanks to his speed. In the graphic below, Uduokhai’s centre-back partner moves high to press the ball. The Leipzig possessor sees that a defender has taken the bait and boots a long ball into the opposing half. Uduokhai the last defender, actually runs down one of the fastest players in the world in Timo Werner and successfully parries the ball out of play. 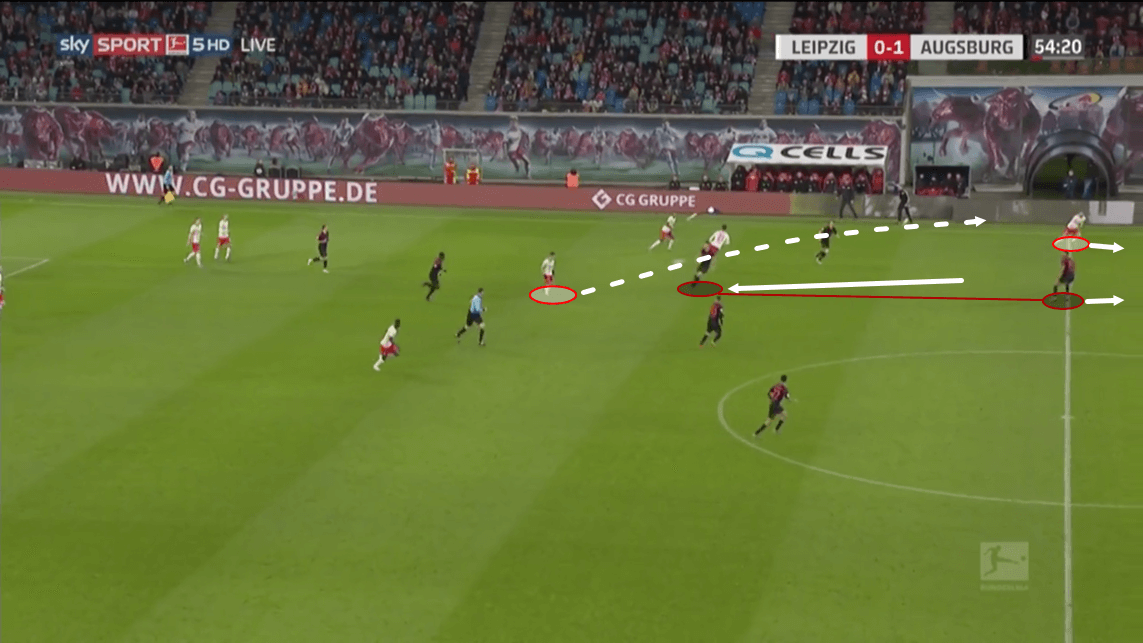 Uduokhai currently stands sixth in the most recoveries per 90 in the Bundesliga this season(13.74).

Arguably Uduokhai’s best trait is his awareness of space and timing. Ultimately, when taking all advanced statistics into account, Augsburg were the club with the least ball retention and possession in the Bundesliga. However, the club has still managed sixth in the league in average interceptions per 90(45.81) and ninth in average shots blocked per 90(2.88), and Uduokhai has played a considerable role in both. 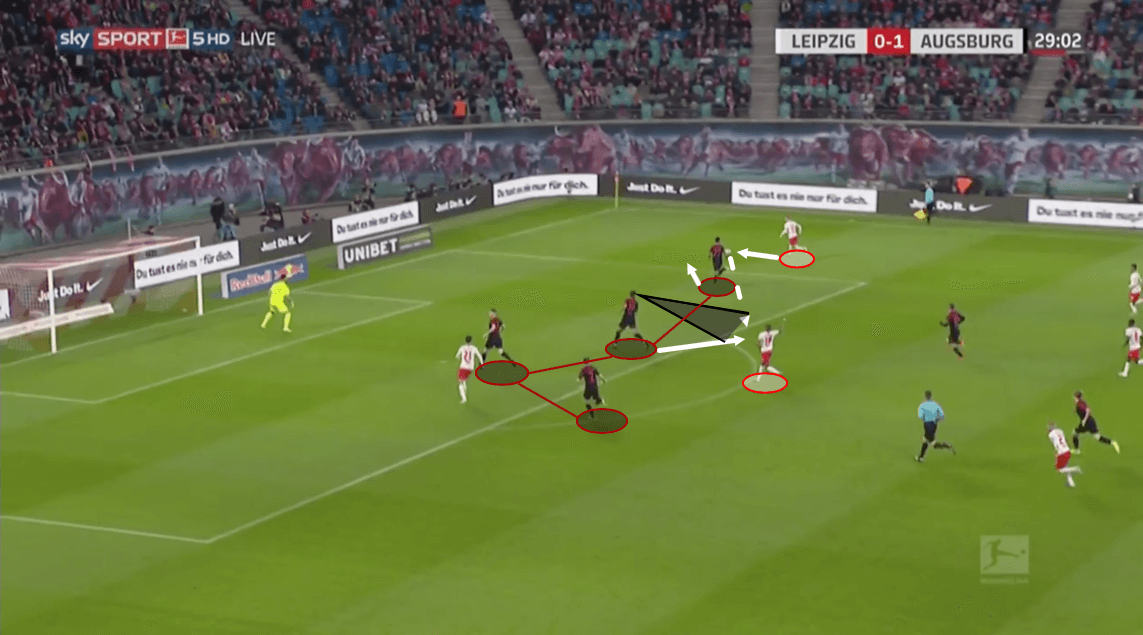 In the image above, Uduokhai is tracking back among the backline. He scans the pitch around him to check for any potential opposition passing outlets, and times his reflex to intercept the pass inside and end the quick attack. 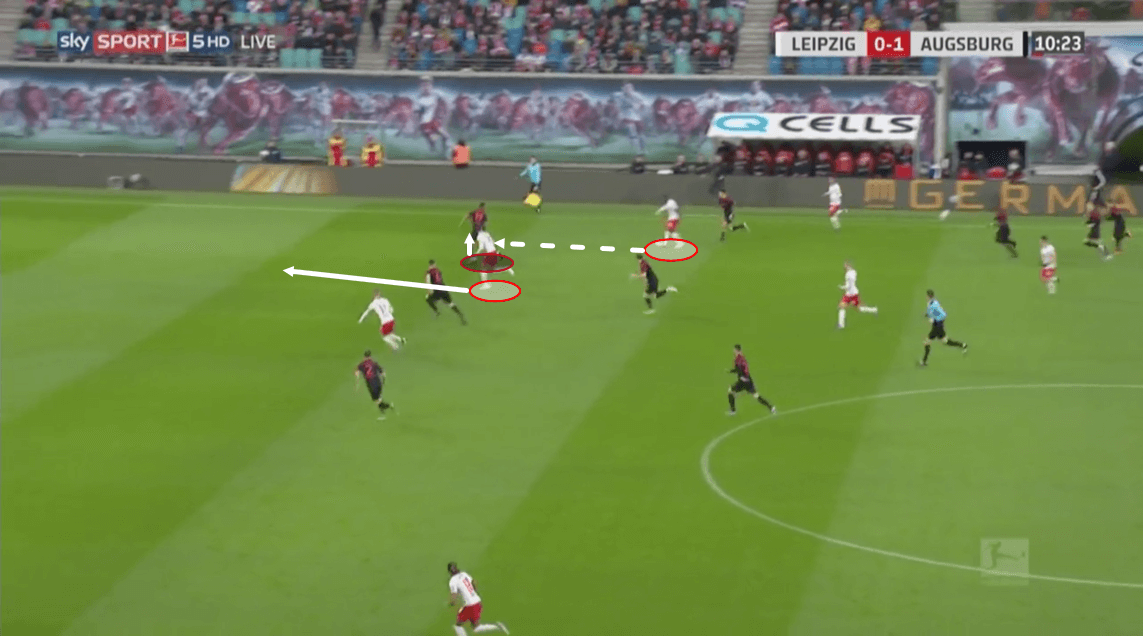 Uduokhai sits ninth in shots blocked per 90(0.84) and has a respectable tally of interceptions per 90 at 5.41. No doubt these statistics are due to Uduokhai’s strong positioning and quick reflexes. Once more, the figure below shows Uduokhai timing his interception to deflect the pass against an opposing one-two passing attack. 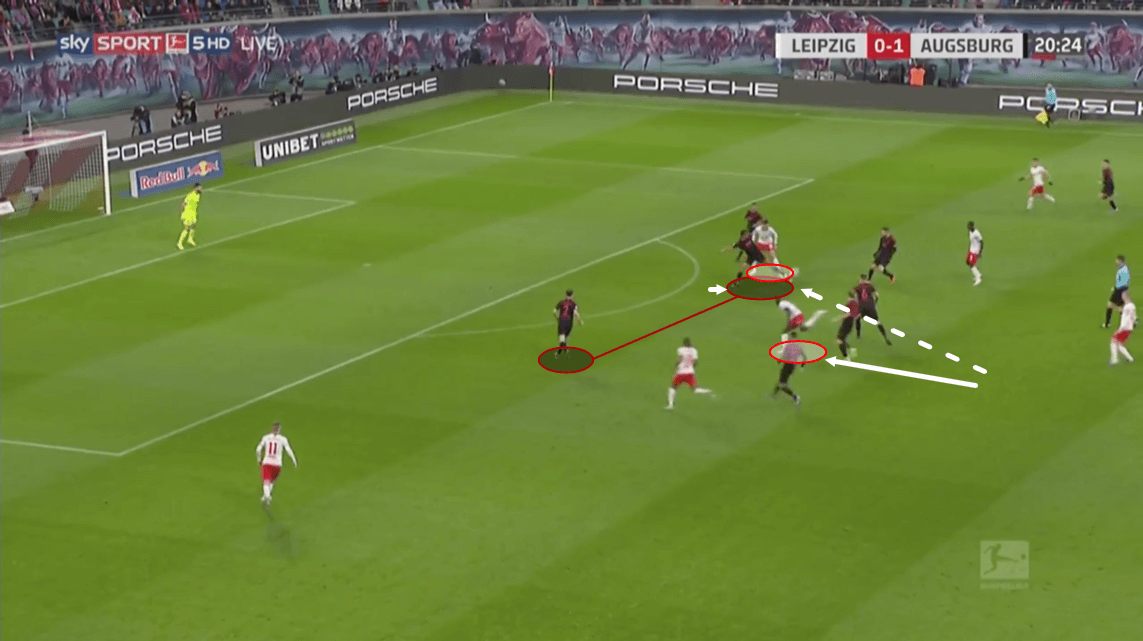 Even in times when Augsburg initially failed in the counter-press (something they commonly failed in) after high positioning in possession, Uduokhai proved at times that he is able to lessen the impact of a counter-attack or even shut it down entirely, as seen below against one of the strongest counter-attacking sides in Europe in Leipzig. 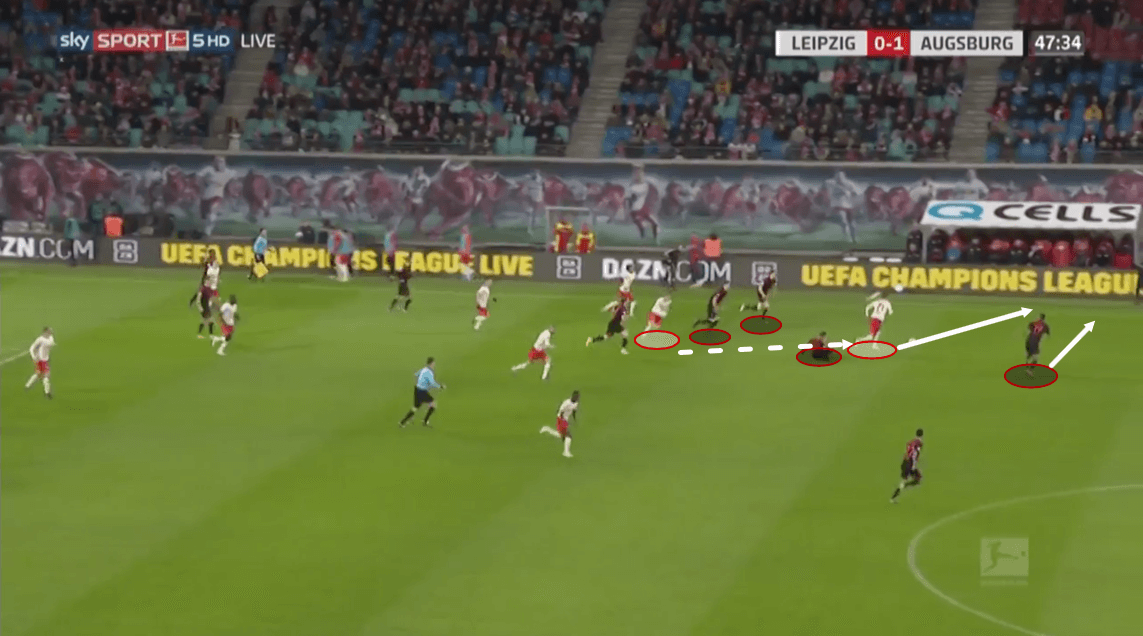 After a poorly executed throw-in by Augsburg, the home side attempts a quick ball-side counter-attack against Augsburg’s high lines. Leipzig quickly progress the ball forward to their front line as Patrick Schick, who has been an excellent addition to the Nagelsmann-led club, receives the ball in the wide area. Here, Uduokhai already has his body shifted to defend in a fading movement towards the touchline, and he successfully tackles the ball out of play, ending the counter-attack.

As a centre-back in the least ball-playing side in the Bundesliga, Uduokhai has a limited effect on Augsburg’s final third play. His two career goals and low key pass frequency are understandable. Where the young defender does make a considerable impact is in the buildup of an Augsburg attack. Often receiving and rotating the ball from the back via the keeper or laterally via along the back-line, Uduokhai has also can complete aerial passes accurately under pressure, for example in the image below against Bayern Munich II. 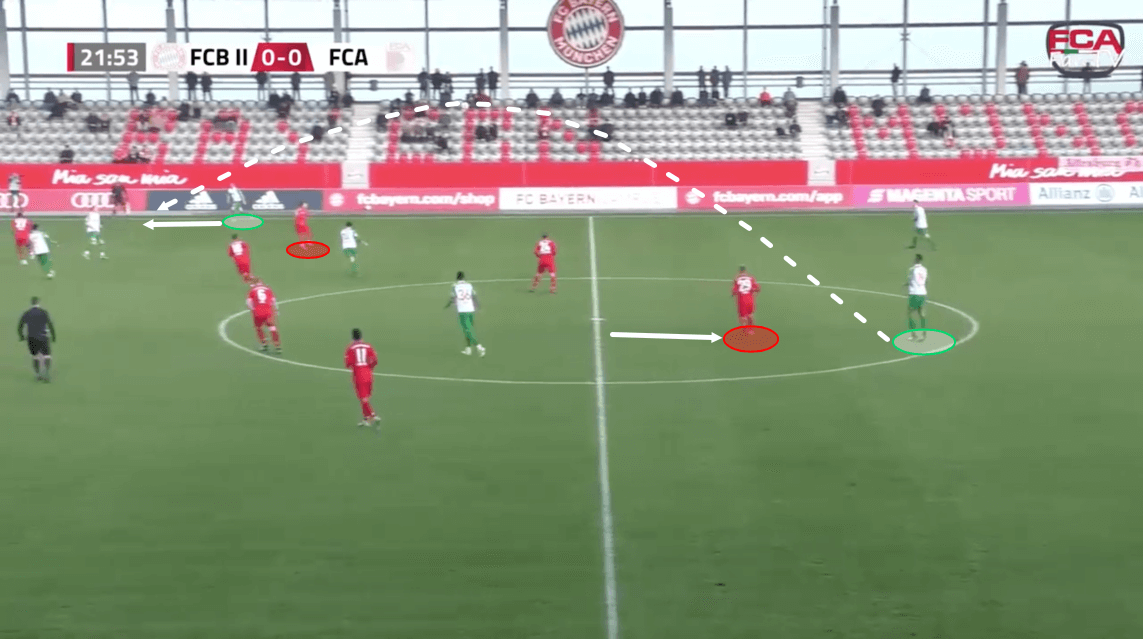 However, one area in which Uduokhai could improve is his vision in progressing the ball from the back. While he has the ability to complete long passes as seen above, a high number of his passes are laterally or backwards. Although this is often by design either to relieve or lure pressure or complete a pass to the deeper midfielder who has dropped between the two centre-backs, there is at times a lack of creativity in his passing. 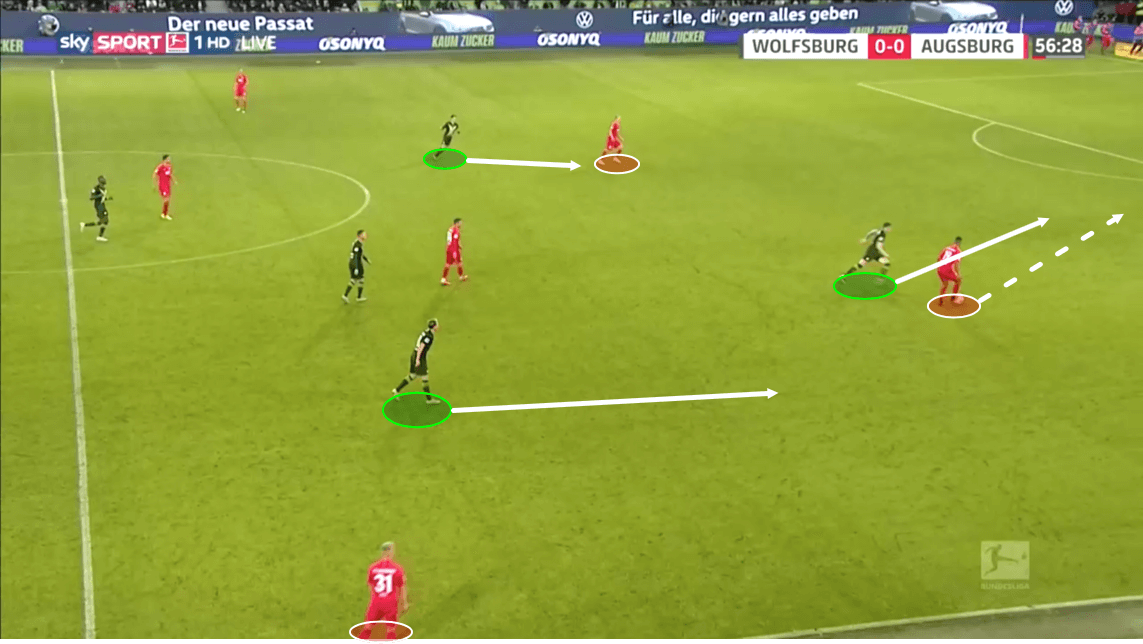 In this example above, Uduokhai loses concentration of the ball and instead of completing a pass wide to left-back Philipp Max, he forces a back-pass to the keeper. While he does drop back to free himself up as the return passing outlet, his backwards pass moved Augsburg’s overall positioning farther back, which compels Wolfsburg’s front press to move forward. This nearly results in a successful press by Wolfsburg.

In context, this lack of vision could actually be down to a lack of support in front of him. Augsburg don’t have the strongest group in attack that would aid in increasing Uduokhai’s forward distribution. For example, the picture below illustrates the lack of support going forward. Uduokhai has ample time on the ball, but his teammates’ lack of movement paired with Leipzig’s defensive organisation force him to simply complete a pass to the midfielder dropping back between the two centre-backs. This conservative recycling of the ball resulted in a turnover by Uduokhai’s teammates. 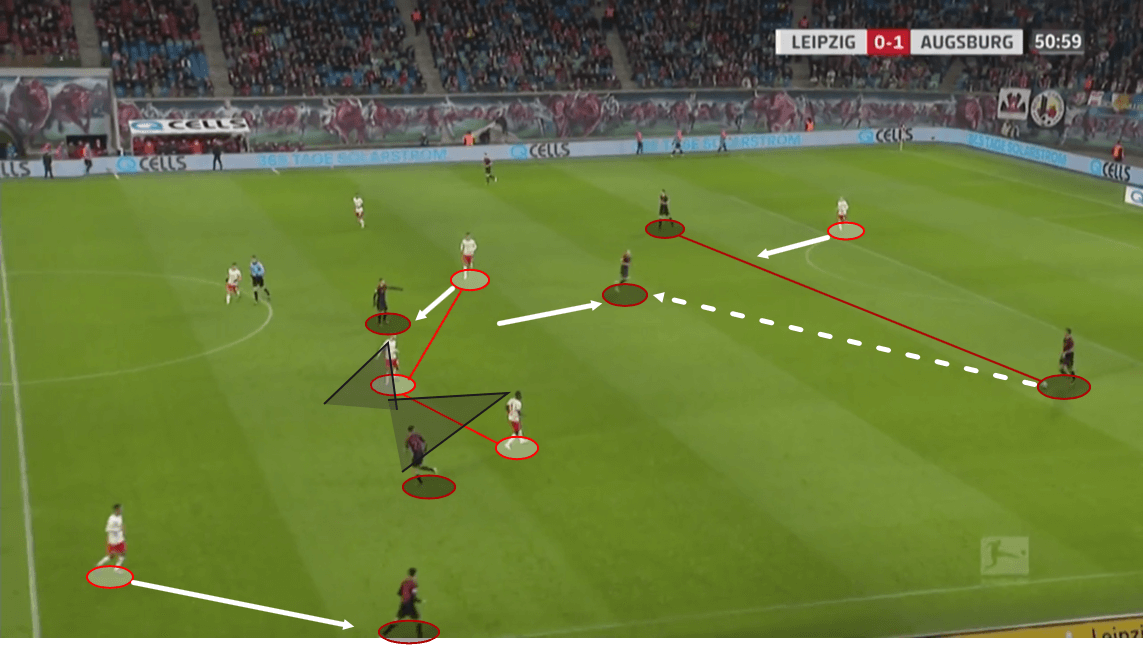 Additionally, Uduokhai has shown the ability to create ball-progressive opportunities for his teammates by himself, as seen in the following two scenarios. 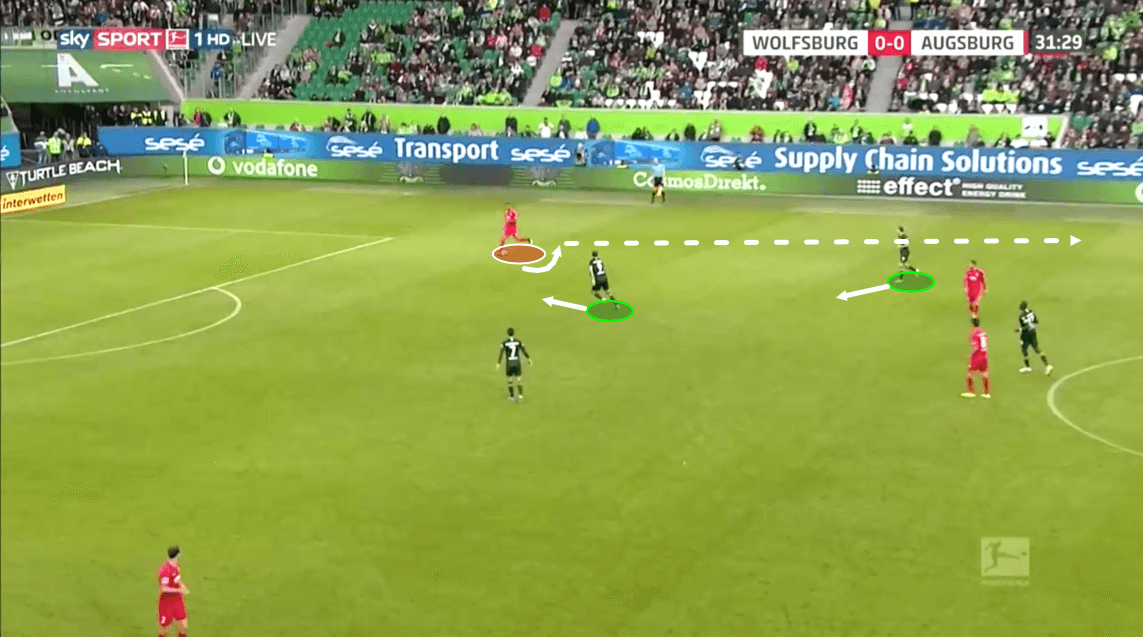 In the example above, Uduokhai turns inside on the ball, facing his body away from his target. He feints a pass to the keeper, which moves the opposing pressing ball-side attackers away from the wide area before quickly turning back outside and completing a pass to Max. 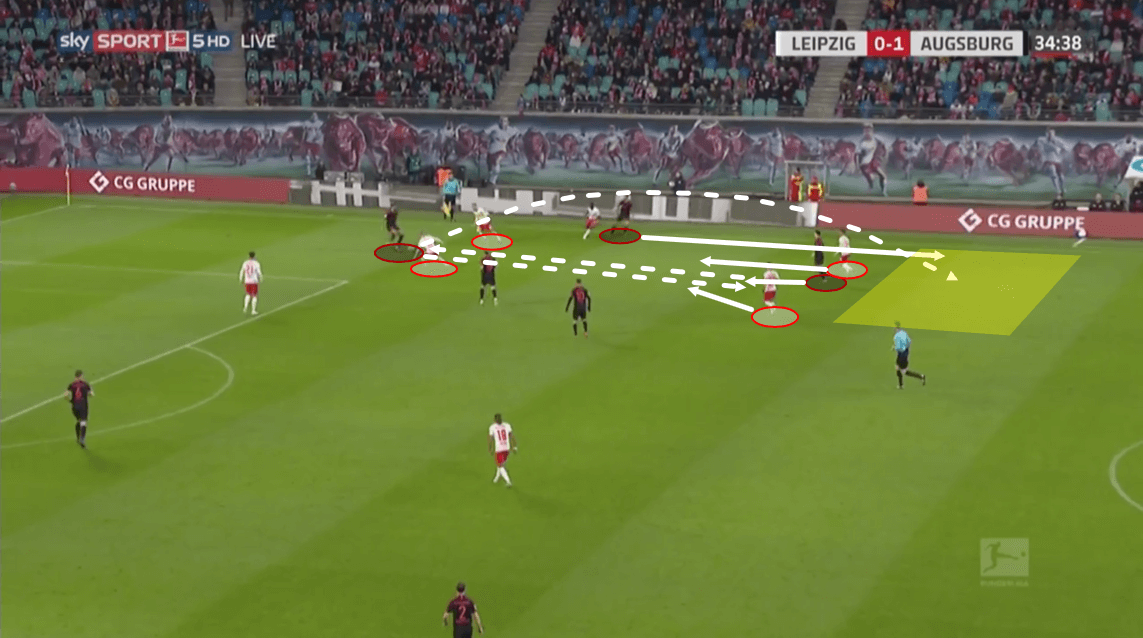 Again, here is an example of a more aggressive style of passing by Uduokhai. After playing two separate one-touch passes with two teammates to lure in the press, the young centre-back hits a sharp pass over the opposition into space behind, effectively bypassing said press. These instances arguably hint more accurately at Uduokhai’s potential on the ball than his conservative passing numbers.

Uduokhai has had an overall impressive season with Augsburg. His speed in defending and knowledge of spacing has played a large part in minimising the threat of relegation at the club. His ideal return to Wolfsburg, a side more in tune with their defensive prowess and possession (they have conceded the tied third-fewest league goals this season and hold the eighth-highest average possession percentage), would surely see an increase in evidence of Uduokhai’s overall abilities. Linked in the past to the likes of Arsenal and Borussia Dortmund, Uduokhai has a bright future ahead upon analysis.

It is also notable that Uduokhai is eligible for both the German and the Nigerian national teams. Should Germany decide to decline him an invitation, Uduokhai could find himself as a staple in one of the most potential-driven national teams in Africa.

Pierre-Emile Højbjerg is a Danish central midfielder, currently playing for his national team and in the Premier League with Tottenham […]

We’re already one month and four games into the 2022 MLS season and with the international break, it’s a good […]