Olympique Lyon might not be playing domestic football at the moment but their transfer plans are in full swing. After reportedly tying up Dzenifer Marozsan and Sarah Bouhaddi to long term contracts, next on the list is former Manchester City defender Lucy Bronze. However, Lyon are activating their contingency plan by moving to sign Ellie Carpenter from Portland Thorns. The young defender now joins up as an understudy to Bronze with a view to taking over in case the England international decides to leave at the end of her contract.

This scout report will examine Carpenter’s skillset and understand how she will fit into Olympique Lyon Feminin’s setup.

Before we can dive deep into the specifics of Carpenter’s role at Lyon, we must understand her role as a player. The 20-year-old is a marauding right-back who plays as an attacking full-back for both club and country. Playing in the W-League has given Carpenter the opportunity to play for both Portland Thorns and Melbourne City. The experience of playing in two leagues is one of the reasons that made her an attractive option for Lyon. Being such an attack-minded full-back, Carpenter’s skillset is geared towards her dribbling, crossing, and output in the final third putting her attributes around positioning, movement, attacking intelligence, and off the ball movement.

Melbourne City utilised a wing-back focused formation while Portland Thorns and Australia National Team have used a more orthodox four-man system, which gives Carpenter the flexibility to play in both systems. Though her skillset is more suited to a wing-back system, Carpenter is equally adept playing as a traditional right-back because of her incredible speed and athleticism. The Australian has been a revelation for both clubs and will now be looking to improve her game playing under Bronze. The next portion of this tactical analysis will detail her strengths and weaknesses in all three phases of play: attacking, transitional, and defensive phases.

Carpenter’s attacking focus is primarily driven by her speed and ability in the final third. As with most full-backs, Carpenter is adept at most attacking traits and slots into both of the systems she has played in. Both Portland Thorns and Melbourne City have been dominant forces in their respective leagues with Melbourne City having won the W-League Premiership and Championship for 2020. This dominant play style aids Carpenter to play her natural attacking game because of the possession-based football the team can afford to play. 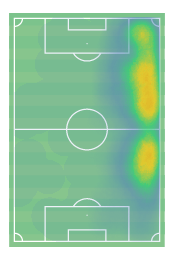 Carpenter’s heat map above is a true representation of her positioning on the pitch. It’s clear to see her attacking intent and her preference to stay wide and put in crosses. When she reaches the final third, Carpenter assesses the situation and looks to find the right cross into the 18-yard box. This is where her tactical intelligence in the final third comes into play. Her ability to be patient and pick the right pass rather than aimlessly crossing the ball is one of her standout traits in the attacking third. In the NWSL, Carpenter registered 5.1 crosses per 90 minutes with 36.4% accuracy rate. The right-back ranked third in the NWSL for most crosses per 90 minutes, second from the right flank, and highest to the six-yard box. This highlights how effective and dangerous Carpenter’s crossing ability is for Portland Thorns. 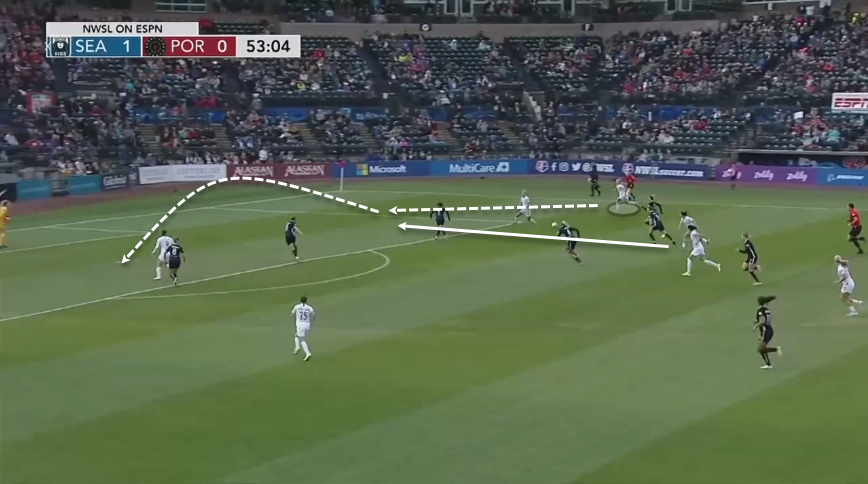 This example here against OL Reign highlights this perfectly. We can see Carpenter making a burst down the right flank on the overlap when the ball is played through to her in the midst of the central congestion. Her teammates have setup a perfect situation for her to cross with the copious amounts of space available in front of her. This scenario would see Carpenter perfectly cross the ball into the 18-yard box for her striker to latch on to.

What we couldn’t highlight in the previous example is her dribbling into the final third. Another major asset Carpenter possesses is her ability to transition and progress the ball forward. At such a young age we’ve seen Carpenter able to use her speed both on and off the ball with intelligence. On the ball, Carpenter has quick enough feet to glide past opposition players and leave them trailing. Off the ball, Carpenter seems to find space because of her preference to hug the touchline. 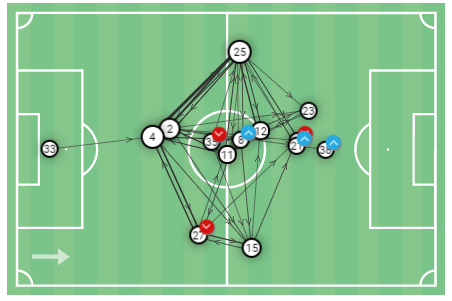 This pass map indicates Carpenter’s (#15) position in Portland Thorns’ side. You can see how high and wide she’s being played which enables her the space to dribble into space and play in between full-backs. Carpenter averaged 4.87 dribbles/90 with a colossal 69% success rate. Those numbers have her ranked fourth in dribbles success rate in the NWSL. 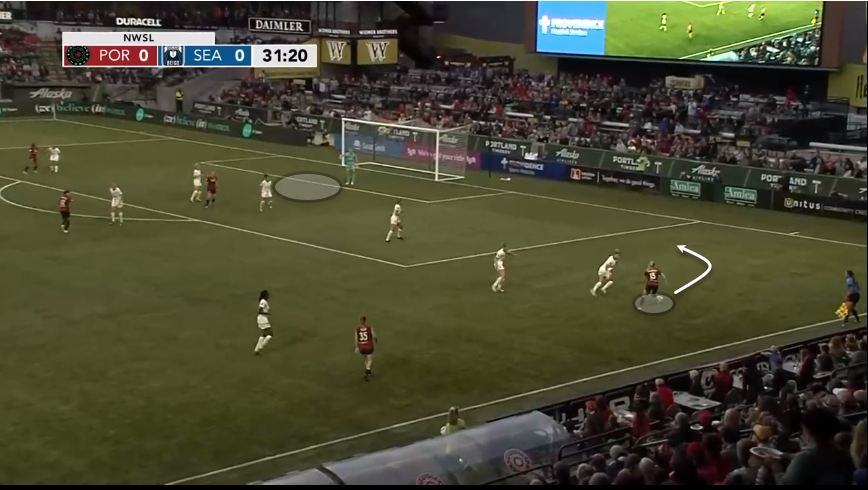 The image above exemplifies her ability in this regard. Once again against OL Reign we can see Carpenter stationed in a very wide right position against the opposition full-back. Carpenter uses her quick feet to get the ball in front of her and manages to cross the ball accurately into the box before the defender has a chance to get her body positioning sorted. These numbers combined with her ability to move at speed and cross is what makes her such a dangerous attacking full-back.

Starting with her strengths, one of Carpenter’s main attributes is her work rate off the ball. When it comes to tracking back and being persistent in pressuring the opposition, Carpenter is very effective at this. Due to her positioning being very high, Carpenter has to do a lot of running as she often starts her runs from the halfway line. This can put her at a disadvantage positionally if the opposition initiates a direct counter-attack, however, many a time we’ve seen Carpenter put enough pressure to dispossess or cause a mistake on the ball carrier. 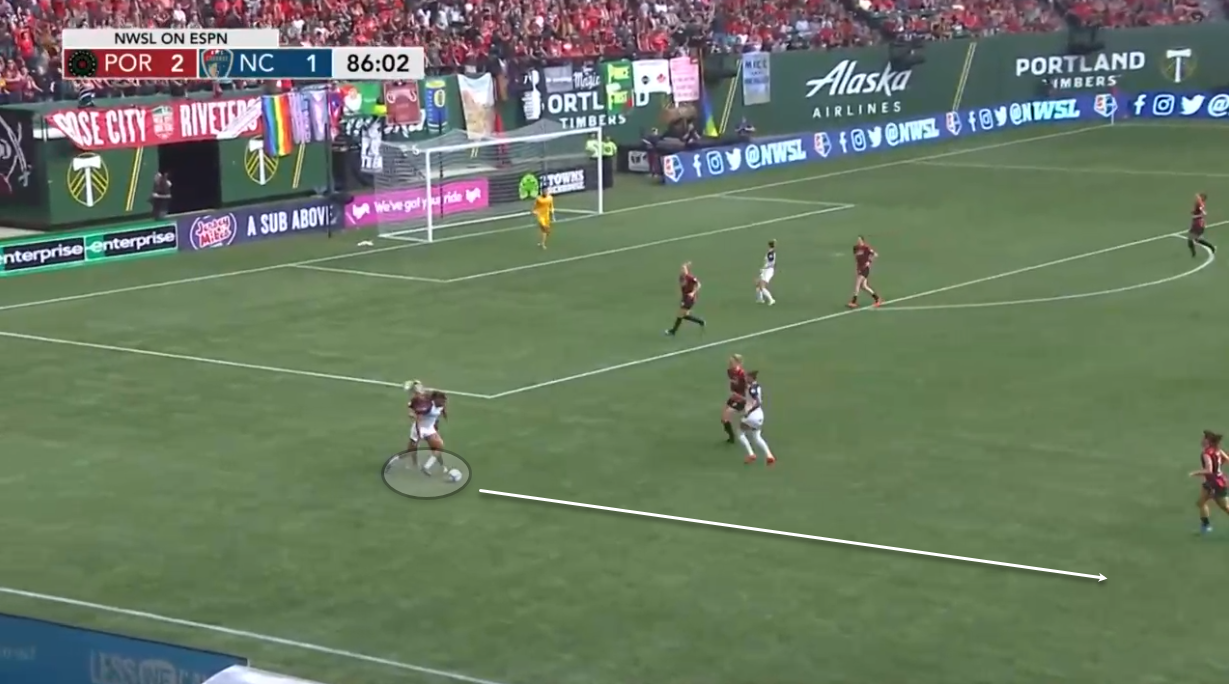 As the image above illustrates, Carpenter holds her position and presses Jessica McDonald tight. While she isn’t able to dispossess her, Carpenter is able to force the Courage centre-forward to retreat back toward her own half, which allows Portland Thorns to reset. 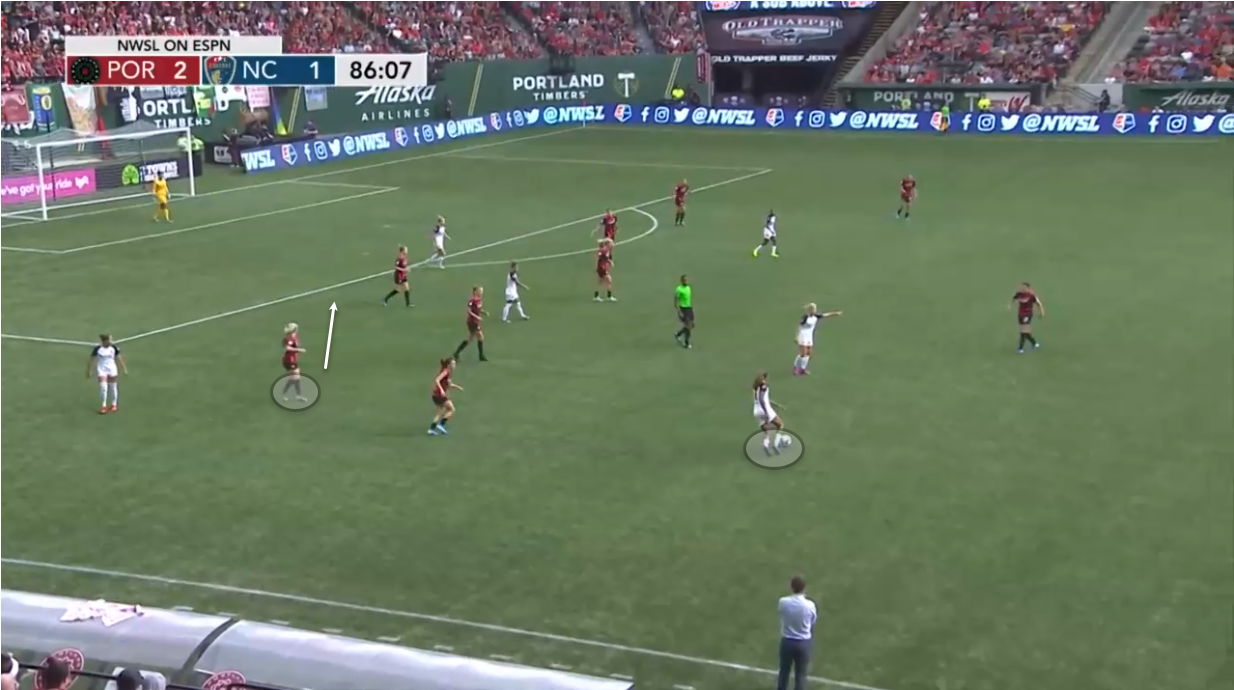 This potentially makes Carpenter a very good candidate for teams that use high or heavy pressing tactics. Carpenter boasts 7.65 recoveries/90 with 51% of these coming in the oppositions half to further emphasise the point. Naturally, the percentage of recoveries in the opposition half is high as she spends most of her time higher up the pitch. This also translates to Carpenter able to help her team transition from defence to attack. If she can recover possession higher up the pitch, the resulting move can be very beneficial for her team through her counter-attacking speed. The below image is a good example of Carpenter’s work rate producing high recovery where she presses the ball receiver as soon as she sees the pass being made. 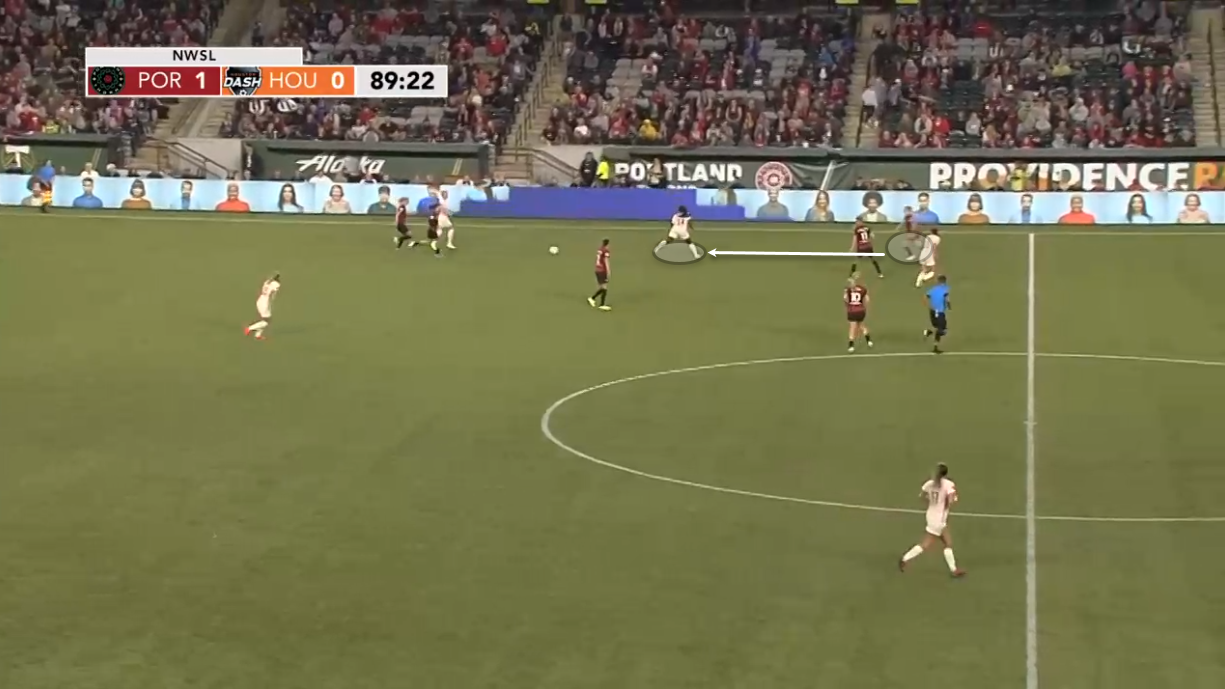 The result can be seen in the second image where it shows the pressure applied by Carpenter yields an attacking opportunity for Portland Thorns. 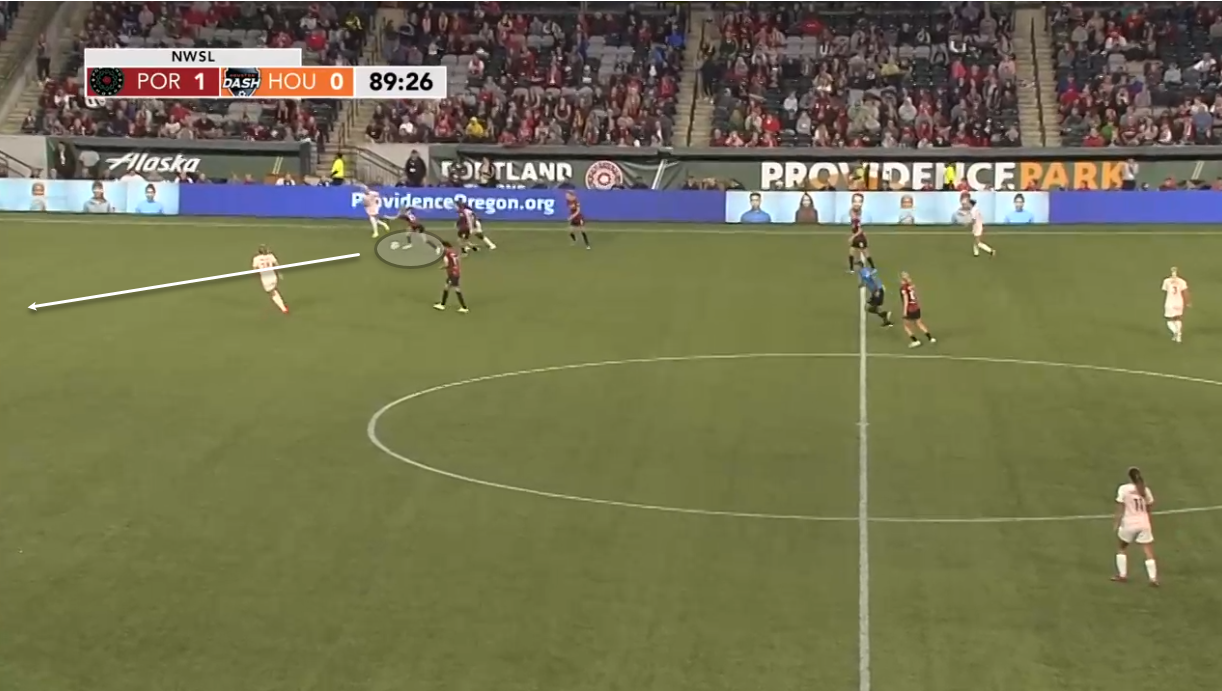 Nonetheless, Carpenter’s direct defensive skills need improvement. Her defensive positioning and ability in 1 vs 1 situations is a part of her game that is exploited by opposition attackers. Due to Carpenter’s high positioning, she can often be left with a lot of ground to cover if the opposition manages to bypass her through direct passes. That puts her in a poor defensive position from the start and though she can make up the ground, it comes down to her pressure to dispossess. When she does manage to move into an isolated battle against a winger, she isn’t able to stop them from going past. This is due to her positioning when facing wingers. They are able to move the ball away from Carpenter quickly and drive past her with Carpenter lunging out and left behind. Her reactions in these situations can be improved and understanding the space around can change this. 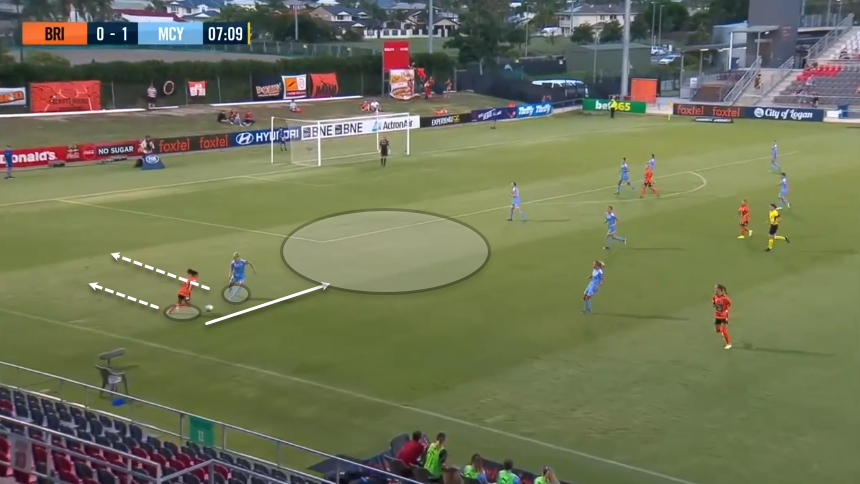 If we take this example, we can see the winger’s intention to cut inside with Carpenter’s body shape showing her there. The right-back would have been better placed to show the attacker down the line by altering her body shape. This would allow Carpenter to give her teammates more time to organise themselves and plug the gap. Letting the player come inside takes her closer to goal and exploit the gap.

How Ellie Carpenter fits in at Olympique Lyon

Now we will look at how Carpenter will fit in at Lyon and the role she can play for the French champions. Till Bronze is at the club, she will be the first choice. Carpenter’s initial role at the club will be as an understudy to Bronze, playing games as a rotation option to give Bronze a rest and acclimatise to Lyon. Lyon use a 4-2-3-1 formation with attacking full-backs who both have very different roles. Because of attacking presence of Eugenie Le Sommer on the left, the left-back, Selma Bacha or Alex Greenwood, would play a slightly more supportive role making space and being a passing option out wide. On the other hand, Bronze plays a more attacking role on the right side with Delphine Cascarino or Nikita Parris. Parris drifts in a lot more whereas Cascarino is much more of a wide player.

Playing wide on the right will suit Carpenter and being able to whip in crosses for a much more mobile and intelligent centre-forward in Ada Hegerberg will only benefit Lyon. Lyon hold the majority of possession in virtually every game they play (68%) which means Carpenter will be attacking more than defending which suits her play style. Lyon will be taking advantage of Carpenter’s runs and crosses. The above crosses map is from their league match against Dijon which shows their highest number of crosses coming from the two full-backs. 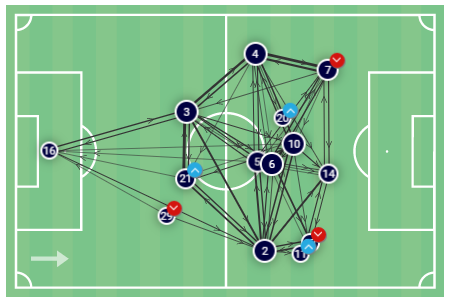 The pass map indicates the positions Lyon’s players take up in a typical game. We can see how high the full-backs, Bronze (#2) and Bacha (#4), and wingers are. Based on the attributes we’ve discussed in the earlier sections, Carpenter seems like a perfect fit. Her attacking nature and style of play is a good fit as she replicated this style at Portland Thorns and Melbourne City. From a defensive point of view, Carpenter will have to improve but playing alongside Wendie Renard and Griedge Mbock should help improve her positioning and communication skills because of their experience and leadership. Learning from Bronze in training will be another benefit for the young Australian.

Through this analysis, we have derived and analysed Carpenter’s transfer from a tactical point of view. Carpenter’s move to France is rivals Sam Kerr’s move to the FAWSL and Chelsea earlier this year. The young Australian has been a revelation in the USA and Australia that her efforts have now been recognised by the perennial French giants. This move represents Lyon getting ready for the next wave of talent and keeping the team fresh, not allowing any of their current superstars to rest on their laurels. At the same time, this is a contingency plan in case Bronze decides to move on this summer or next.