The last days of the transfer window were extremely chaotic for a lot of clubs, especially those in the English Premier League, as clubs scrambled to add an extra level of depth and talent to their squads. In the end, however, there was one player who was targetted by several clubs that did not move and that we believe had the potential to be a real game changer at the top level. That player is the 23-year-old Dutch international winger Cody Gakpo of PSV Eindhoven.

Throughout the summer transfer window, we saw Gakpo linked to a number of clubs, including Manchester United before they settled on the addition of the Brazilian winger Antony from Ajax, but in the end, Gakpo has stayed in the Eredivisie for at least the next half a season.

Now, we should be clear at this point that recruitment from the Eredivise does not come without its risks. The Dutch top-flight is extremely open and attacking and as such it can be difficult to accurately judge the quality of a prospective new signing from that league, difficult that is, but not impossible.

Any example of good recruitment in the modern game is driven by the buying club doing their due diligence on their prospective new signing. That will include doing a scout report on a player, both on video and live, references from players or coaches who have worked with the player and, of course, data analysis.

In this tactical analysis article, we are going to concentrate on the latter as we break down the game of Cody Gakpo in order to understand why the likes of not only Manchester United but also Southampton and Leeds United were keen on adding the explosive Dutch attacker to their ranks this summer. 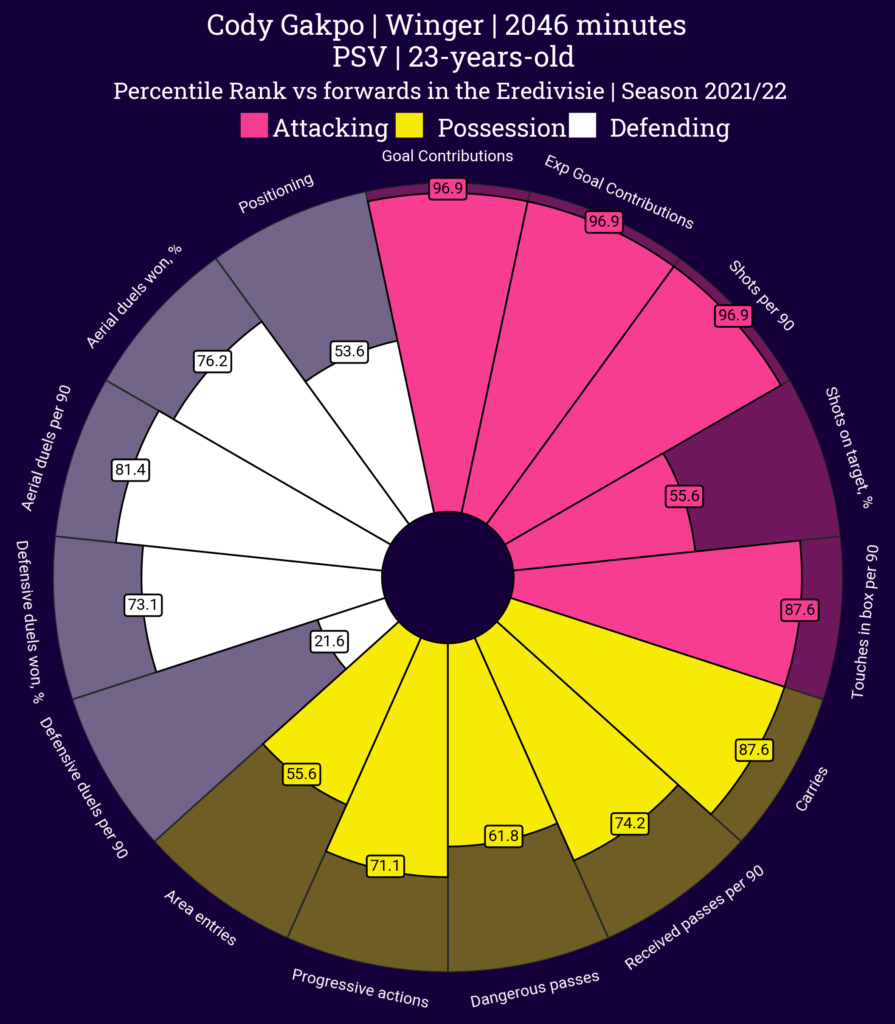 The first thing that we should make clear at this point is that Cody Gakpo is not your typical Dutch winger from a physical perspective. He is listed at 189cm | 6’3″ and he has a powerful and athletic build. He is a player who is active and impressive in all phases of the game, as you can see from his pizza chart above.

While these charts can provide a significant level of context around a player we can then use data to delve deeper into the key areas of Gakpo’s game and how he fits into his side’s tactics.

Let’s start in the attacking phase of the game. 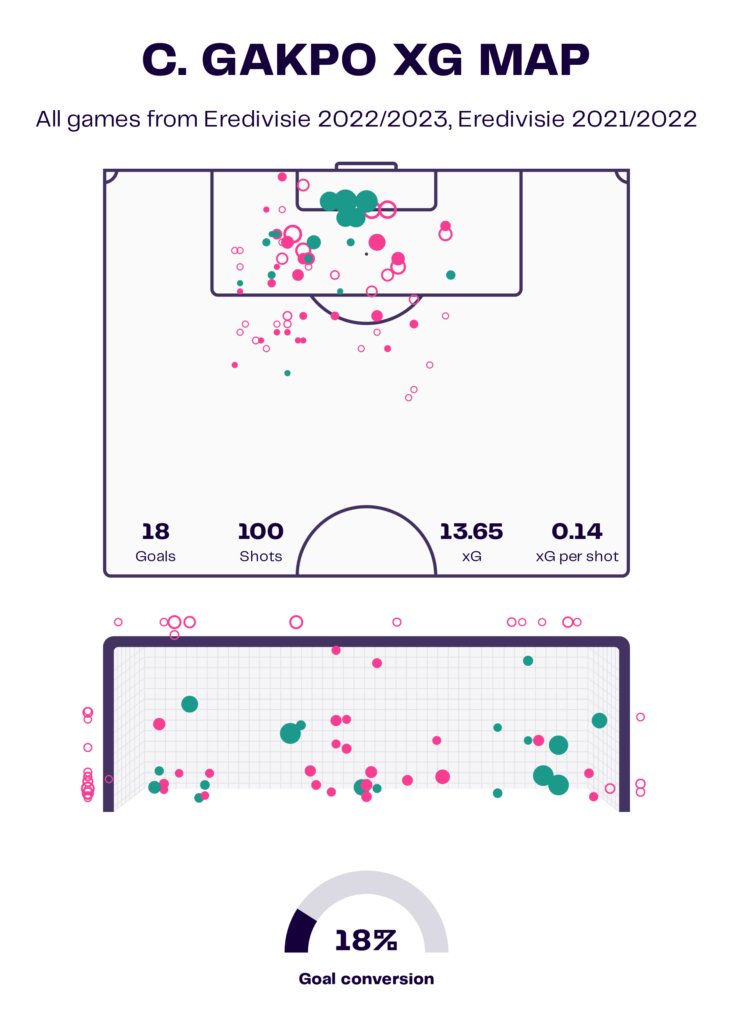 First of all, let’s break down his output in front of goal. The viz above gives us extra insight into the areas of the pitch in which Gakpo took his shots. For the purposes of diving deeper into his data at this point, we have included data from both the 21/22 Eredivisie season and the matches played so far in the 2022/23 season. You might remember that earlier we referenced the fact that Gakpo scored 12 league goals across the 21/22 season. As you can see, our viz states that he has 18 goals. That’s because so far this season, in only 338 league minutes he already has 6 goals this season.

The first thing that we can draw out of this viz is the general positioning that Gakpo has when he is taking shots. He is naturally right-footed but he likes to play from the left of the attack. That means that he will look for opportunities to cut inside to break into the corner of the penalty area before looking for opportunities to strike at goal. We can also see that there is a cluster of goals that have been scored by Gakpo that sit around the edge of the 6-yard-box. When you see this for a winger, it tends to be a good sign as it shows a player who makes good off-the-ball movements to break into the area. 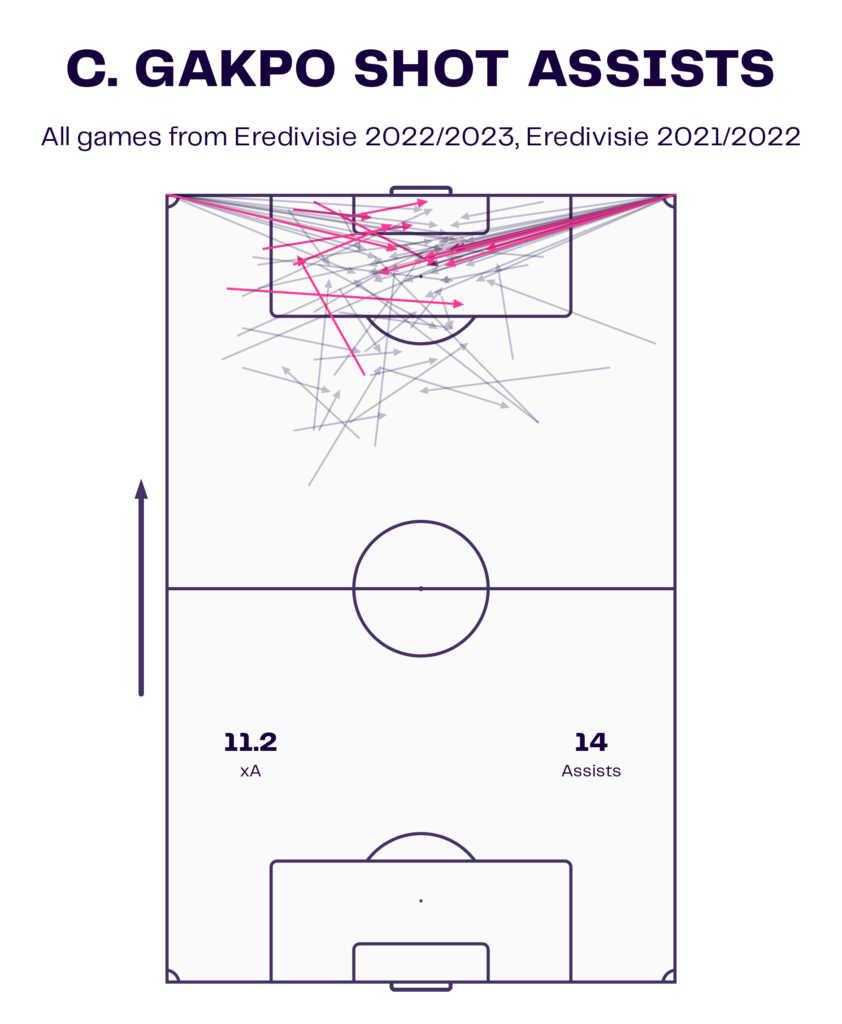 Next, we can break down the areas of the pitch from which Gakpo registers his assists. On the viz above, you can see that Gakpo has registered 14 assists from an xA of 11.2, relatively stable numbers. The viz shows the areas in which Gakpo provides assists (the pink arrows) and the areas in which he plays passes that result in shots at goal (the grey arrows).  The first thing to note in this instance is that Gakpo is a winger who has the capacity to provide a great deal of threat from set pieces and especially corners.

As you can also see, however, Gakpo also created a large amount of shot-creating actions from passes that were made along the edges or even inside the penalty area. 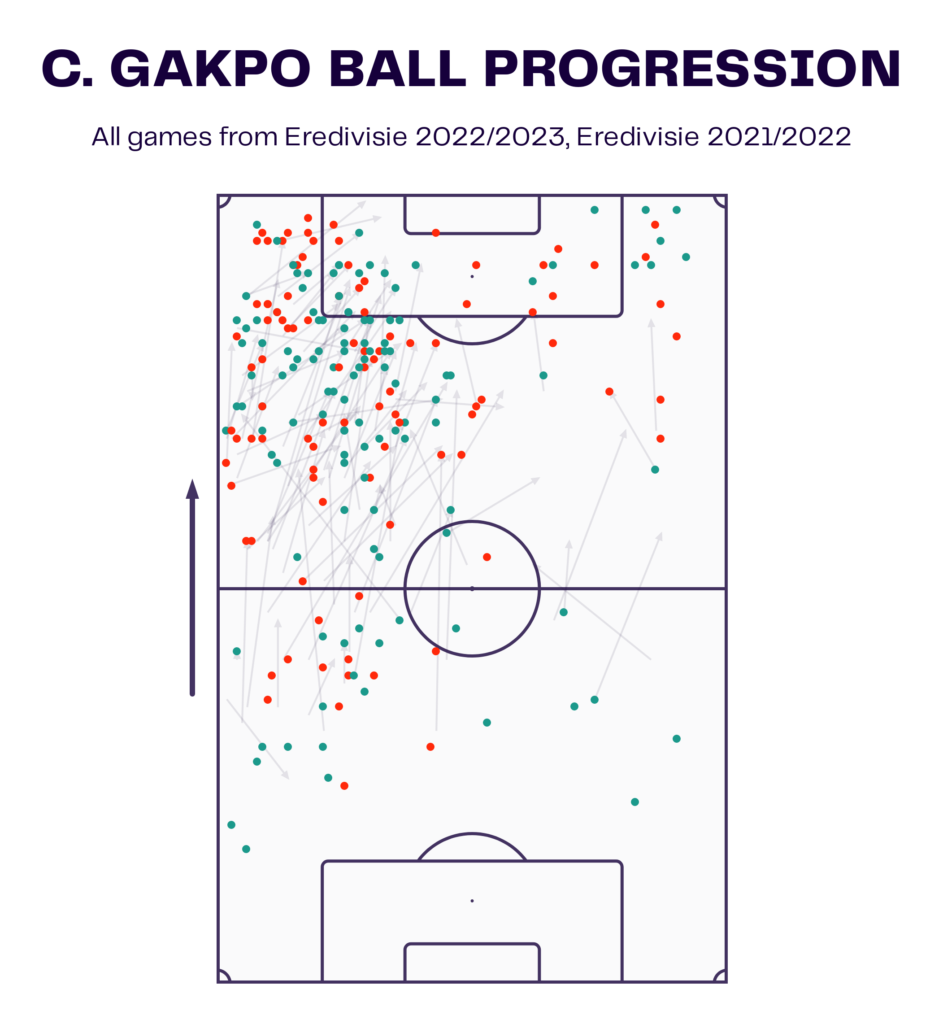 It is interesting to note how many successful dribbles Gakpo has over the chosen time frame in the left half-space. 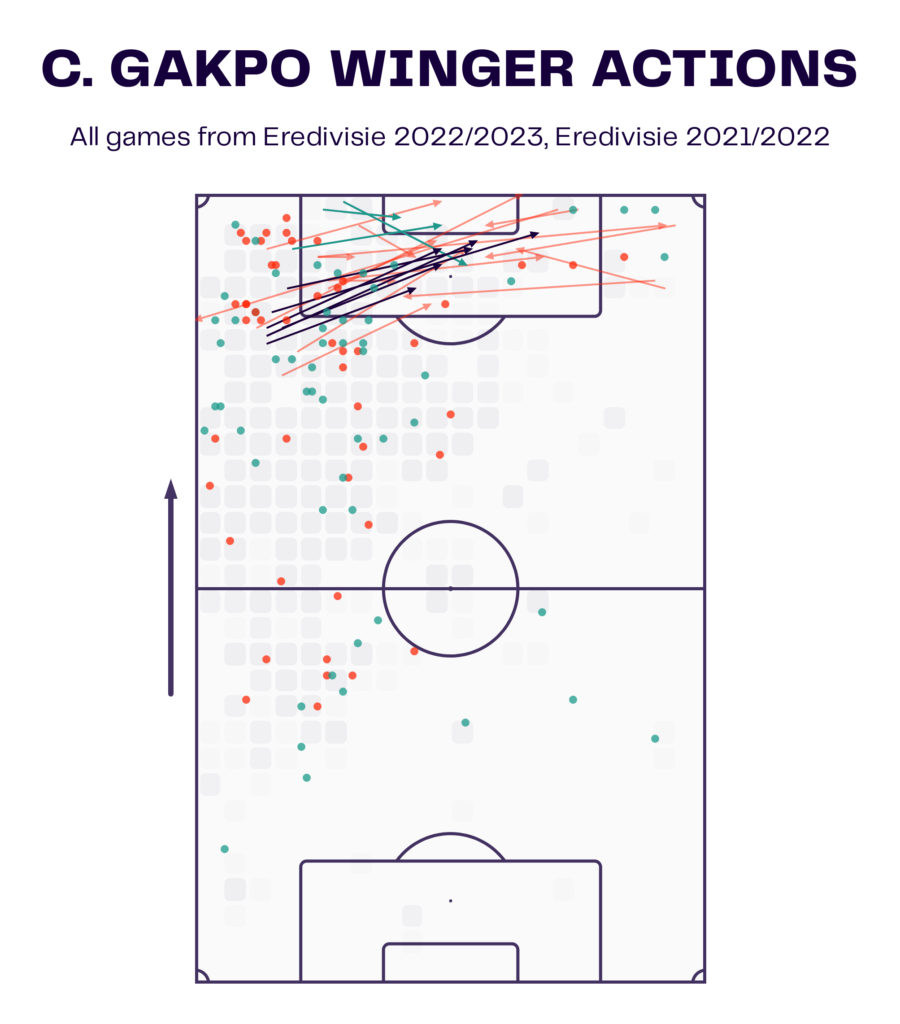 Here, we have a breakdown of the actions classified as ‘winger actions’ for Gakpo across last season and this term so far. Here, the green and red dots represent successful and unsuccessful dribbles. The arrows represent crosses with the green being assists, the blue being completed and the red being uncompleted

Once again, from this viz, we can draw out context around the positions that Gakpo takes up on the pitch and the areas in which he completes his actions. As you can see, once again, the majority of these actions take place in the half-space on the left side of the pitch. In these areas, Gakpo presents a threat to attack the opposition defender on the inside or down the outside and his ability to attack at different angles makes him very difficult to defend against effectively. 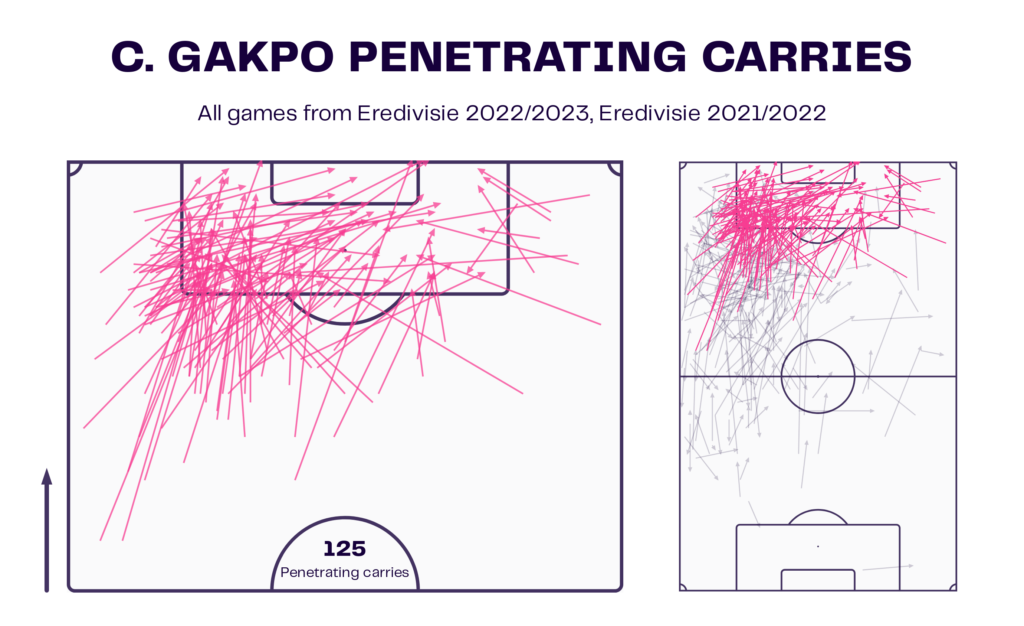 Next, let’s add another level of context in terms of the areas that we could expect to see Gakpo attack in through his chart for penetrating carries. Once again, we can see that the vast majority of his carries in this manner occur in the left-half space where he will look to break into the opposition penalty area on the left corner. We can see that across last season and this season so far, Gakpo registered 125 penetrating carries which averages out at 4.72 penetrating carries per 90. This is very impressive output from such a direct attacking winger.

Finally, let’s take a look at adding some defensive context to the player. 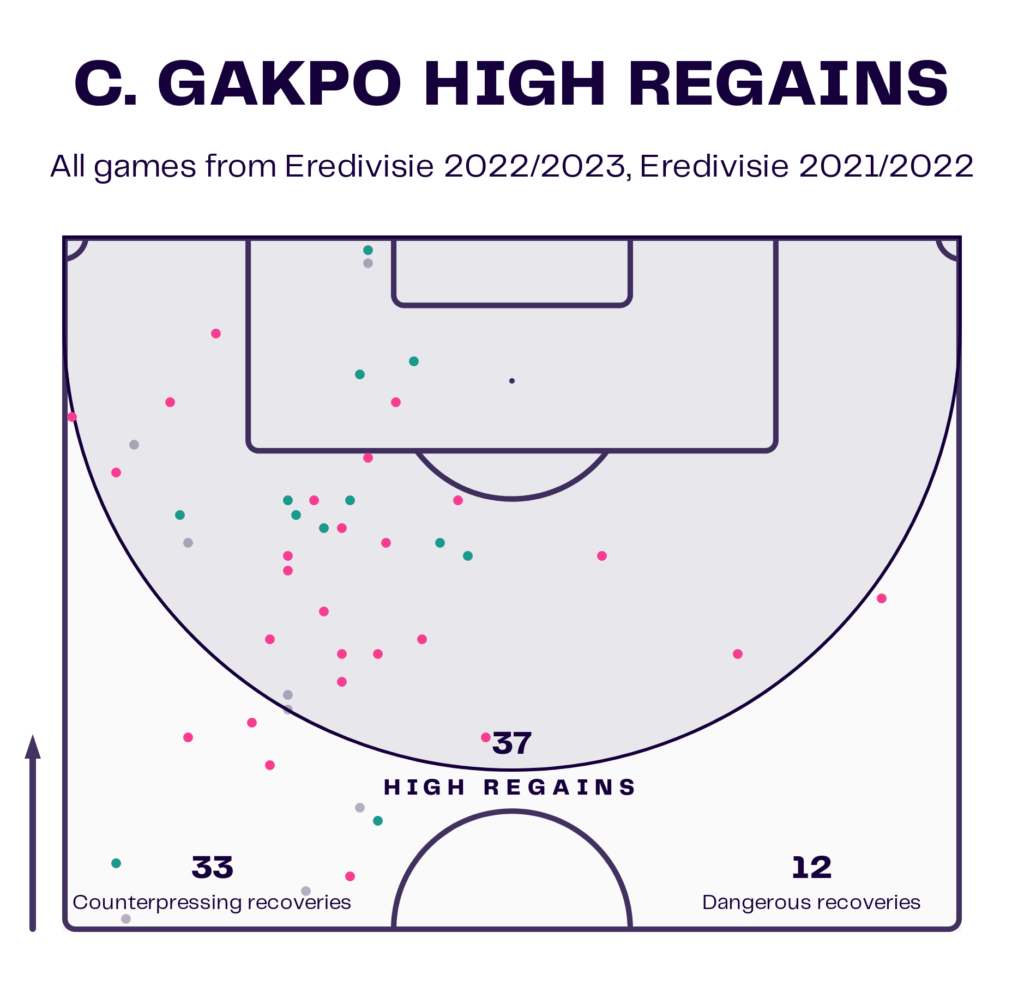 With the tendency within football today being more geared toward teams playing with an aggressive approach to pressing and counter-pressing when they lose possession of the ball, it is important to be able to tell how effective a player that you are considering signing is when it comes to regaining possession in high areas, especially when you are scouting a wide forward.

This chart shows the proportion of high regains from Gakpo over the course of last season and this season in the Eredivisie. As you can see there are 55 total recoveries charted with 37 of those being considered to be “High Regains”. 33 of the recoveries are from counter-pressing (pink marks) and 12 of those recoveries are classified as dangerous recoveries (green marks).

Once again, we see the positioning of the majority of the Dutch attacker’s actions coming in the left half-space.

When it comes to recruitment within football, context is, without a doubt, king.

Two players can play in the same position but the way that they interpret that position or their tendencies on the pitch can lead to them performing in very different ways. Gakpo is an inside forward type who wants to live in the half-spaces and attack the area directly and with aggression. His approach is very different to a player who might play as a left-winger but look to stay on the outside and beat the defender before making crosses into the area.

Using data as we have here allows us to add significant layers of context to our process.