Having struggled to make an impact on Dutch football in the Eredivisie, Thijs Dallinga managed to make his mark in the second division. Following an exceptional 2021/22 Eerste Divisie campaign with Excelsior Rotterdam, the striker scored 32 times and assisted 8. A club record fee of £2.1 million was received for him from Toulouse. The Ligue 1 club managed to land his signature amid interest from clubs such as Rangers.

Having started every league game so far this season, Dallinga has impressed boss Philippe Montanier. The young striker has scored twice so far and is settling in well. However, he is yet to hit the dizzy heights of last season. A step up in opposition quality, as well as a move away from his home in the Netherlands, may be to blame.

This scout report will provide an analysis of how Dallinga will fit into Toulouse’s style of play as they look to have a strong first season back in Ligue 1. It will be a tactical analysis of the 22-year-old and the tactics used to get the best from him.

Dallinga is an out-and-out striker and one that knows where the back of the net is. He has started all of Toulouse’s league games as their striker. He was deployed always as a striker last season too. A typical number ‘9’ is well sort after in today’s game especially due to the introduction of inside forwards. 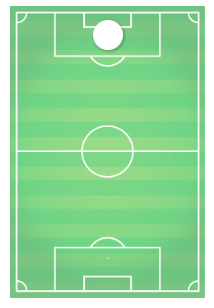 As mentioned all of his minutes this season have come in the role of striker. Dallinga is always the furthest player forwards for his Toulouse team. He is comfortable playing as a single ‘9’ and has great experience playing as a pair. Last season Dallinga played as a pair for a large majority of the season striking a great relationship with partner Reuven Niemeijer.

As a striker, he is a great height at 5’11” tall and is relatively lightweight meaning he is sharp and agile. His heatmap shows his strengths, playing narrow and within the width of the box.

Although he can find himself in pockets of space. this was mostly from last season where he would play as a front two and drop deeper and wider. As a solo ‘9’ Dallinga looks to stay central and penetrate the box as much as he can. 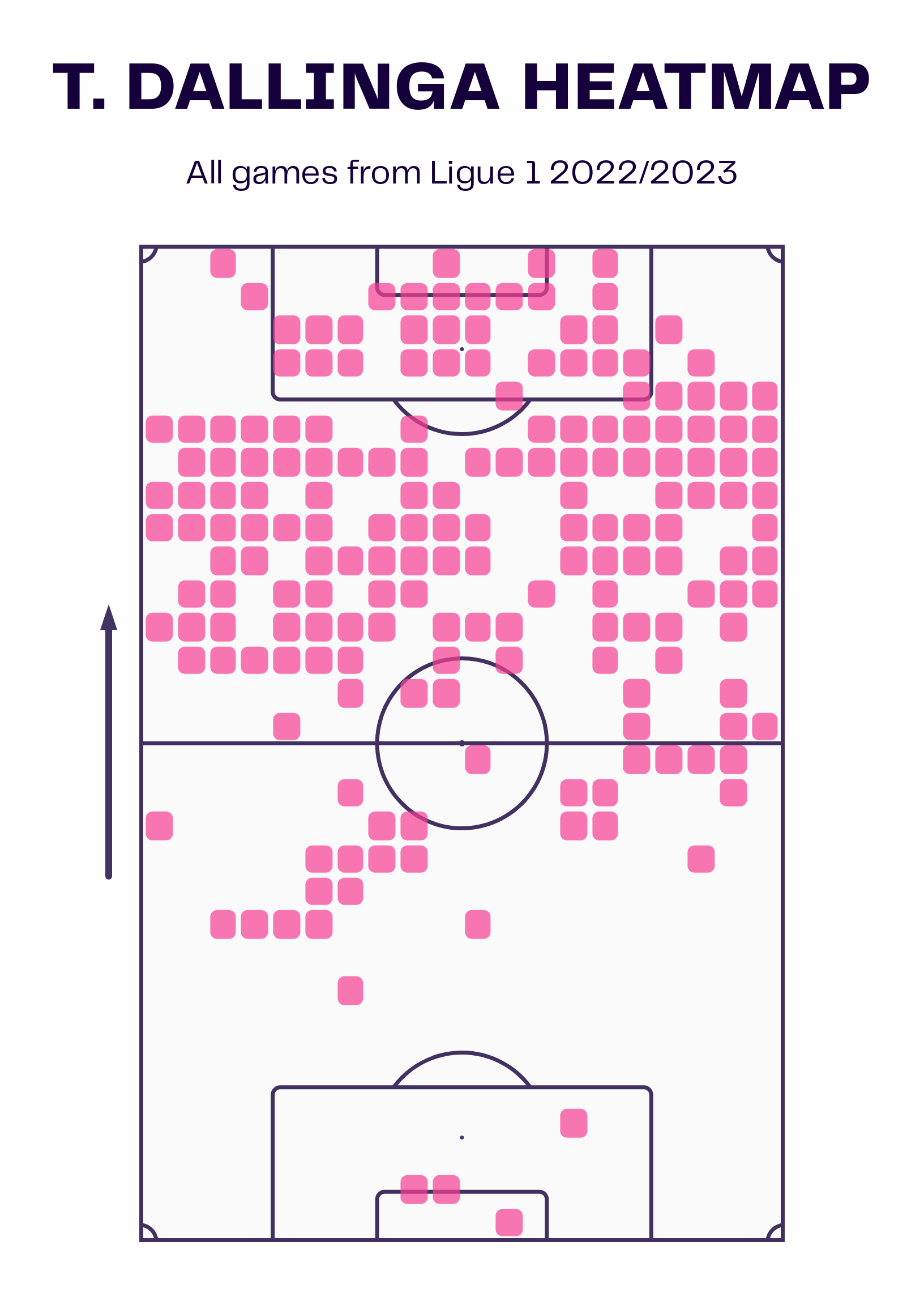 Following his transfer, it is a step up in opposition quality and Dallinga will be marshalled more expertly. He will need to find new ways of creating space and goal-scoring chances for himself.

His heat map shows he is very active in the box, but there is a light area on the edge of the box around the ‘D’. This may be something that becomes more used as Dallinga finds less space and time in the box. It is certainly an adaptation that would develop his game.

Toulouse this season have mostly set up in a 4-2-3-1 formation. They also use a 3-4-3 or 4-3-3. Something to note is that all formations used deploy just one striker, this season Dallinga has been leading the line in all matches. They like to utilise a front 3 in all their formations which can change depending upon the opposition.

Across the season so far, Toulouse have ranked highly in a number of areas. Their style of play is exciting and quite brave for a newly-promoted side. They are yet to pick up amazing results but have started fairly strongly.

Surprisingly, Toulouse have had the seventh most average possession so far with 51.2%. A stat that is only going to repay them further down the line. As you can see below, their clear structure in the build-up with the back four and midfield two enables them to keep the ball. 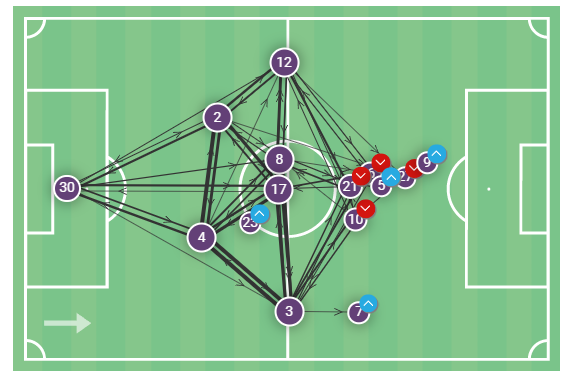 Notice that the play is very central in the attack, the ball in the final third travels through the ’10’ when using the 4-2-3-1 formation. This style suits that of Dallinga as he performed excellently with a striker partner, s bodies close to him will enable quick interchanges and passages of play.

By asserting dominance on the ball, Toulouse are able to move forwards with possession. This leads them to create chances and get the ball into dangerous positions. Toulouse rank seventh in the league for touches in the box per 90 with 19.03. This will give them opportunities to score and as mentioned after looking at his heatmap, Dallinga loves to be inside the penalty area.

Out of possession, Toulouse are an aggressive side. Their style is not a wild press from the front, they set traps and press deeper into their half. They score very well for PPDA with 10.04, the fifth lowest in the league, showing that their tactics and pressing work. They’re aggressive in a tackle, scoring the third highest challenge intensity with 6.3.

During the early stages of his career in France, Dallinga has been used in a very direct way. Playing all of his games up front alone, Dallinga is required to be somewhat of a target man. The Dutchman receives the ball in the air multiple times a game. With his stature and understanding of the game, Toulouse are able to benefit from this. 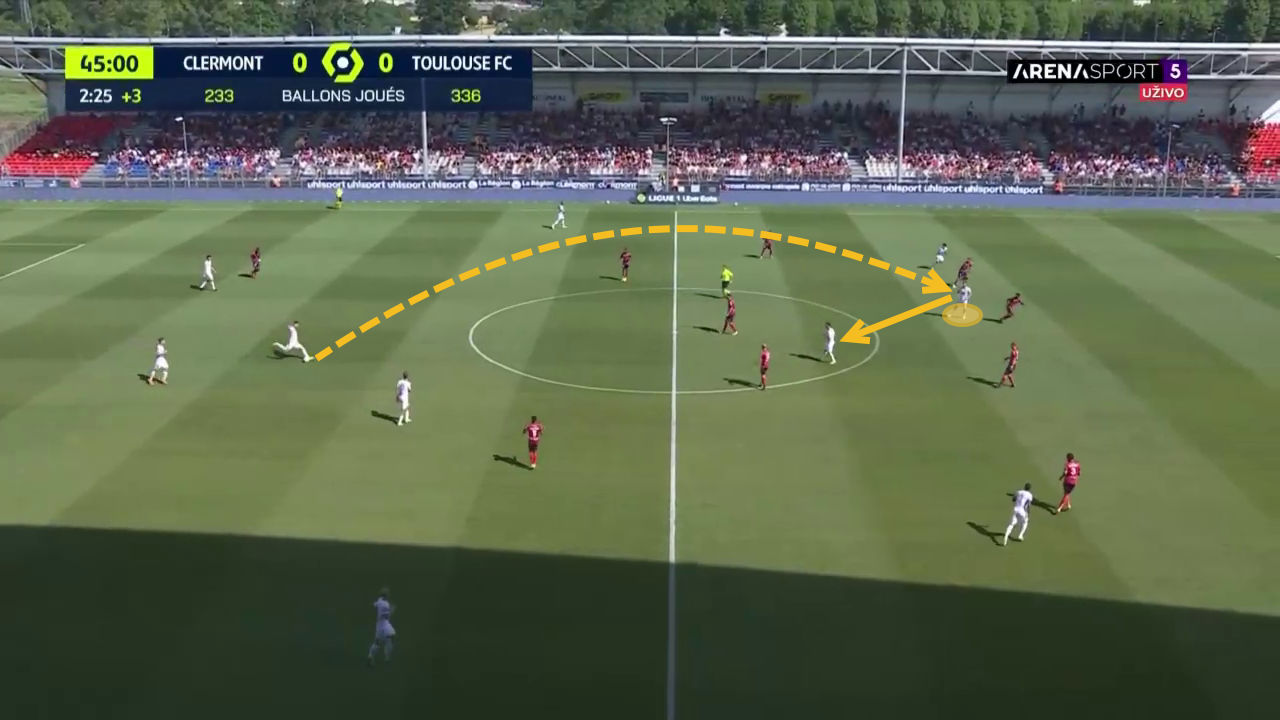 Above is an example of how Toulouse have utilised Dallinga in their build-up play. By playing long into his chest, Toulouse can quickly bypass the opposition’s midfield. Dallinga has good awareness and is able to chest the ball down first-time to bring a teammate into play.

Another example of how beneficial Dallinga has been is when he picks up a loose ball and holds the play up. He is smart in the sense of knowing where to position himself. Below is an example of how he shapes his body between the man and the ball. By doing this he minimises the potential for a tackle and if there is any contact, a foul will be given. 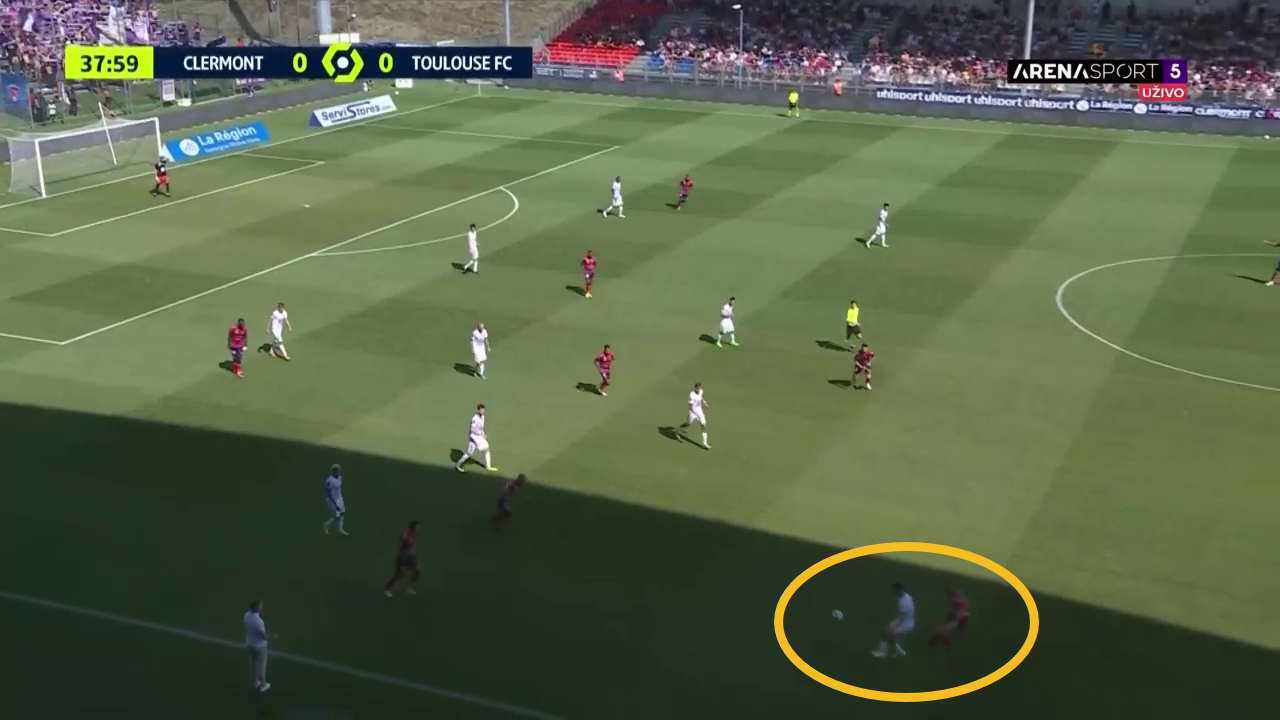 By holding up the ball, Dallinga allows his teammates to recompose after a period of defending. By relieving the pressure he then drives the team forwards with his attacking ability. He is great at combining and playing with the midfield, which is important for a single striker as he can often be isolated.

Out of possession, Dallinga’s role is clear. To shape the opposition’s attack. Dallinga is Toulouse’s first line of defence and his running and positioning dictate play. He forces the play down one side of the pitch which then enables his teammates to press easier as the playing area is now smaller. 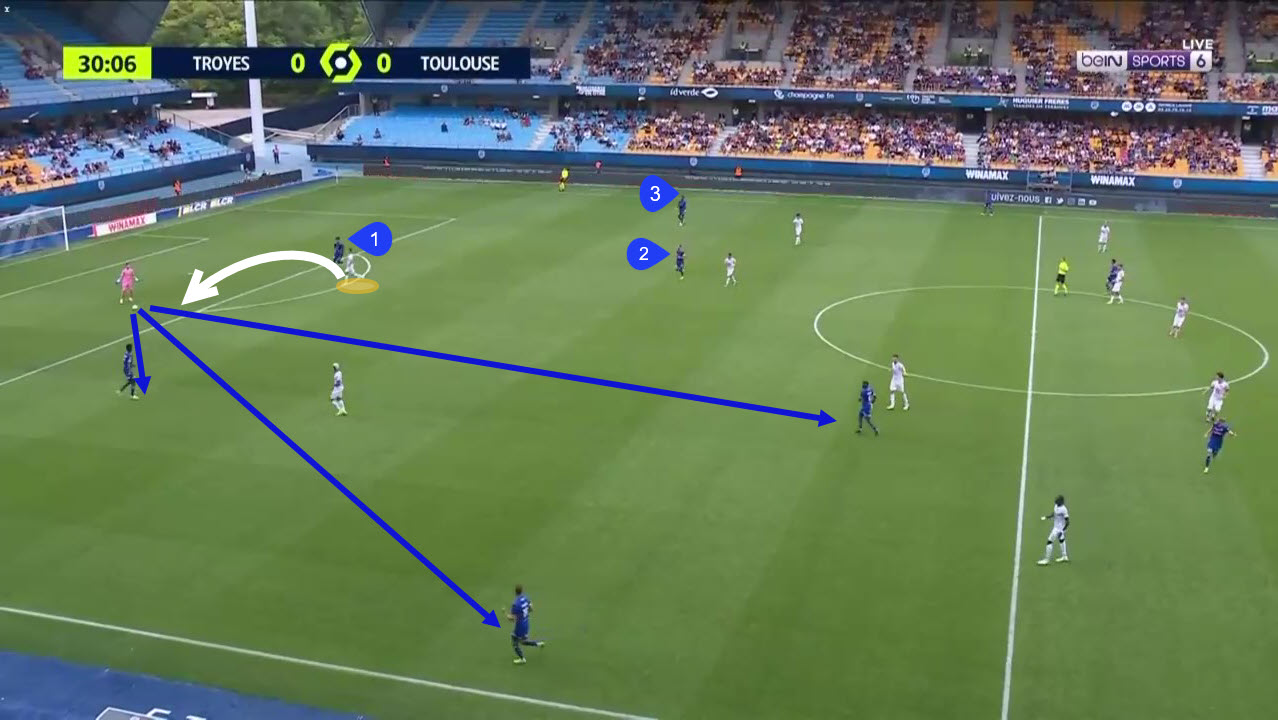 The example above shows how Dallinga has instantly taken three opposition players out of the build-up. His movement cuts off one side of the pitch. By reducing the size of the pitch and manipulating the opposition into playing a certain way, Dallinga can set his team up in the best way possible. Playing in a compact area is much more difficult so it is important his teammates recognise his press and support him correctly.

Not only is there a chance of winning any second balls, but also Dallinga has the vision and ability to find a teammate. Below you can see how he notices an advancing teammate and the striker plays a lovely weighted header into his path. Moments like these create good goal-scoring opportunities and Dallinga is great at playing passes first-time. 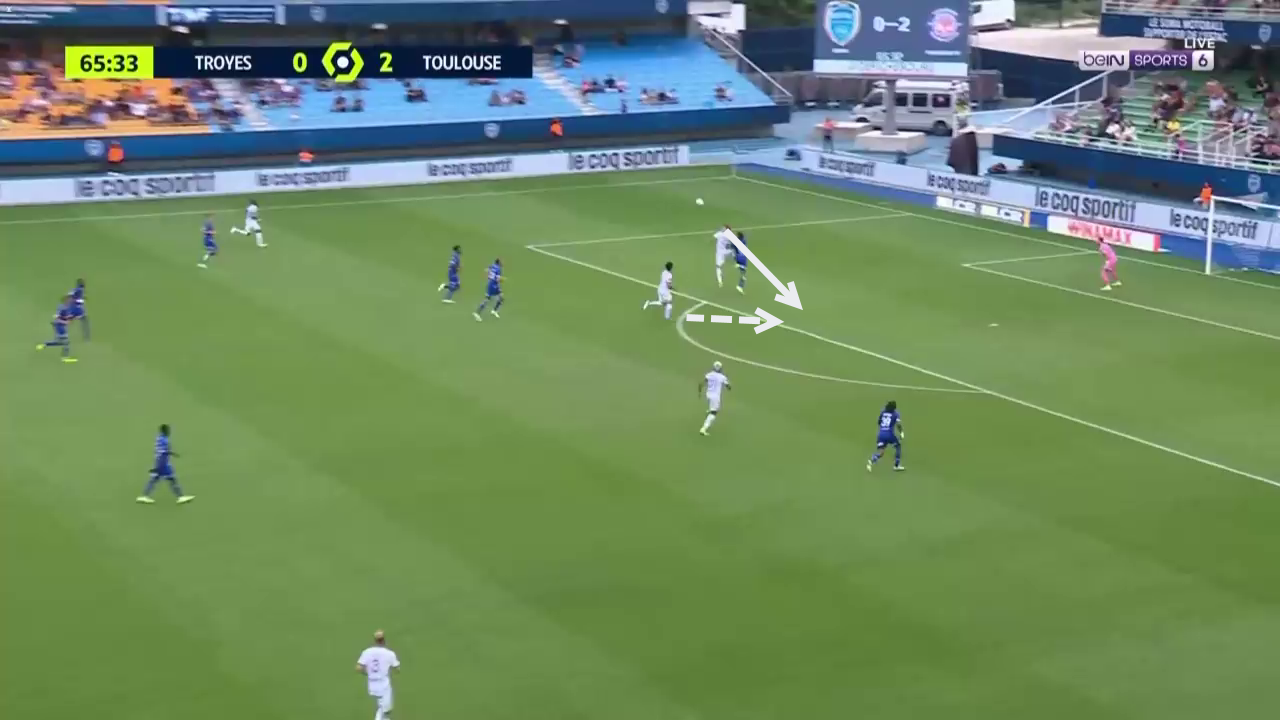 On the topic of first-time passes, it is an area that the young forward excels in. He is comfortable playing the ball on both feet which is perfect for quick combinations in the attacking third. He is more than capable of playing nice balls into space. His timing and weighting of these passes are okay but could be better.

Furthermore, as Dallinga advances his game, he will find himself dropping deeper to receive the ball. When this happens, he needs to be comfortable carrying it at his feet. On occasions, he has not been as direct in his link-up play. Below you can see an example of where there is potential for an attacking overload. 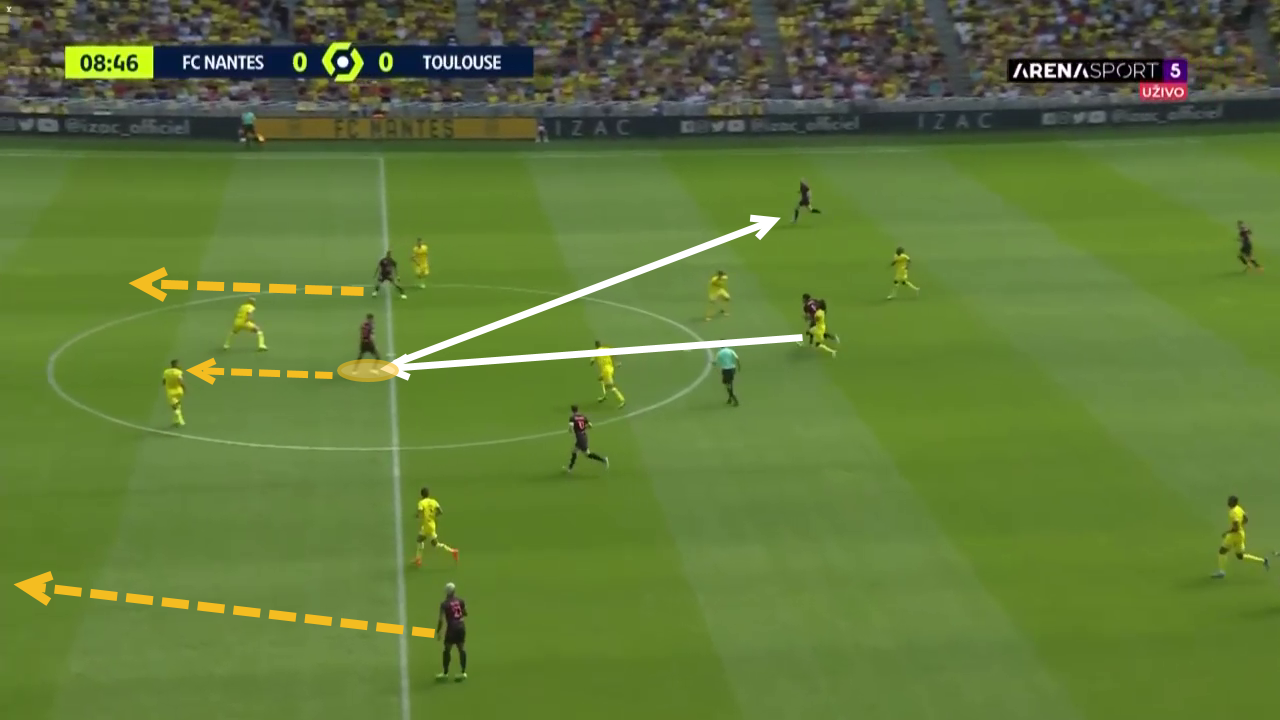 Dallinga does not turn with the ball at his feet but instead plays the ball backwards, slowing the attack down. This is something that he will develop in order to become an even greater attacking threat.

Dallinga plays very centrally when attacking. Due to this, his positioning and movement need to be smart. He is quick to notice players out of position and is able to make a dangerous run. He capitalises on the lack of concentration from the opposition centre-backs. 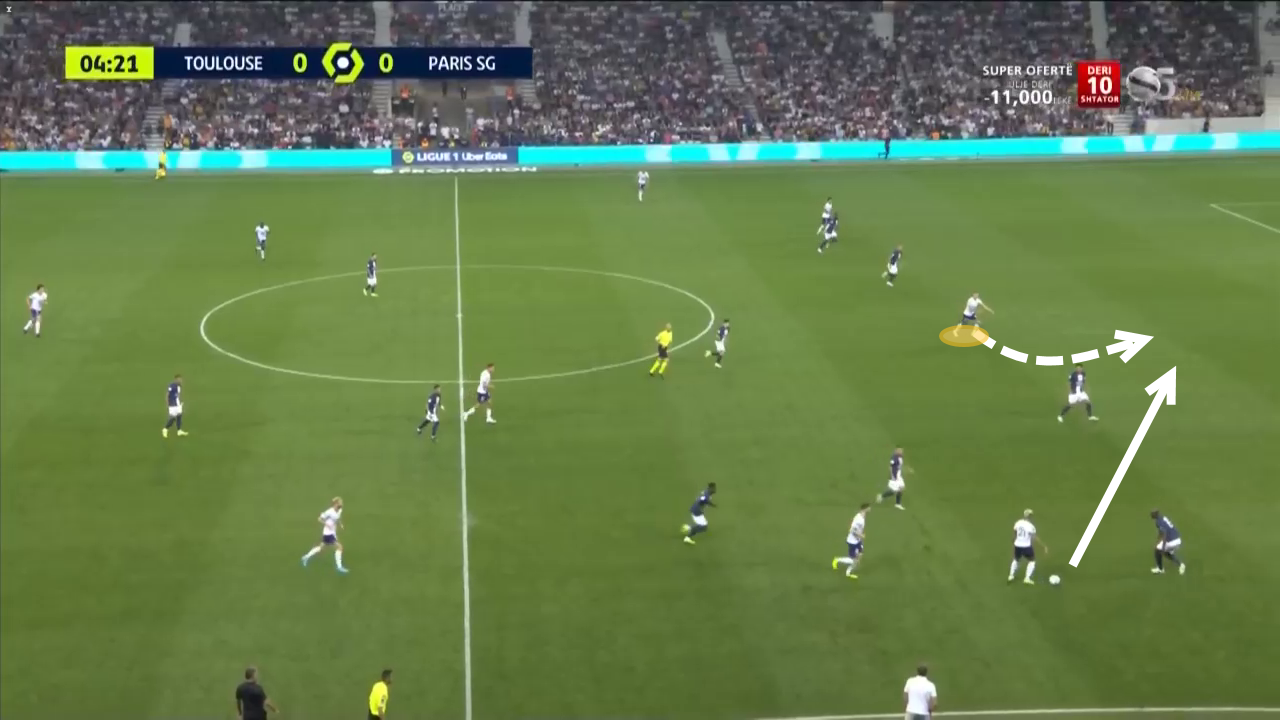 Dallinga is aware of the huge gap and makes a smart curved run to ensure he stays onside. Not only this, he makes a clear non-verbal signal to his teammate.

For a striker, Dallinga has a good shot map in terms of the areas he is getting into. No striker wants to be taking lots of shots from outside the area. All but one of his shots this season have come from inside the box. There is also a large majority of shots from a very central area inside the area. 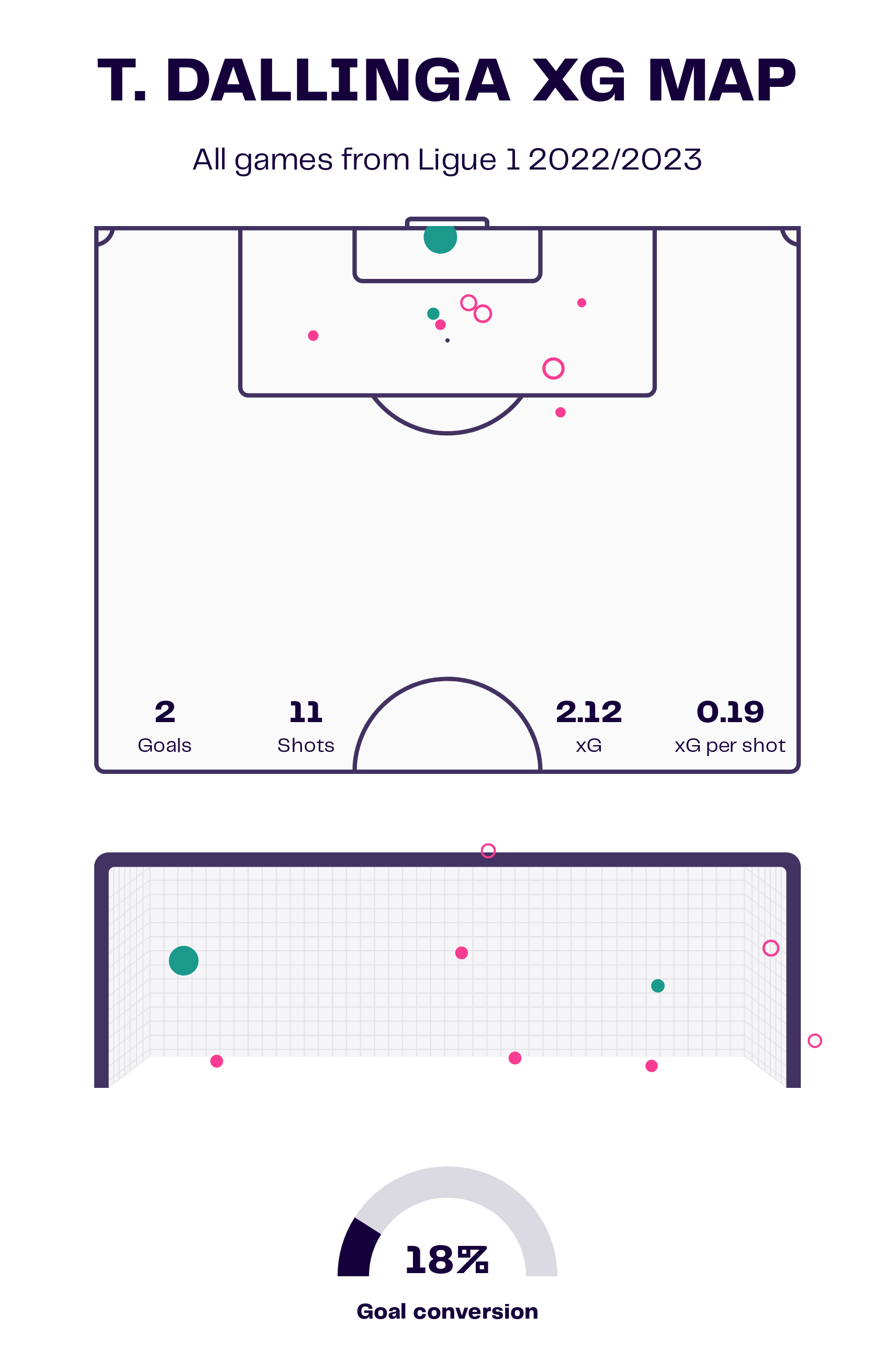 Dallinga has managed to take up dangerous positions in the box, shown by his shot map and has taken his chances as xG would show. He is performing to his expected goals, however, he will be looking to add to this tally.

One area of his game that Dallinga needs to focus on is his positional play when he is away from the ball. It is easy to switch off and not be alert to things taking place when the ball is far away. But Dalligna needs to improve his reading of the game. 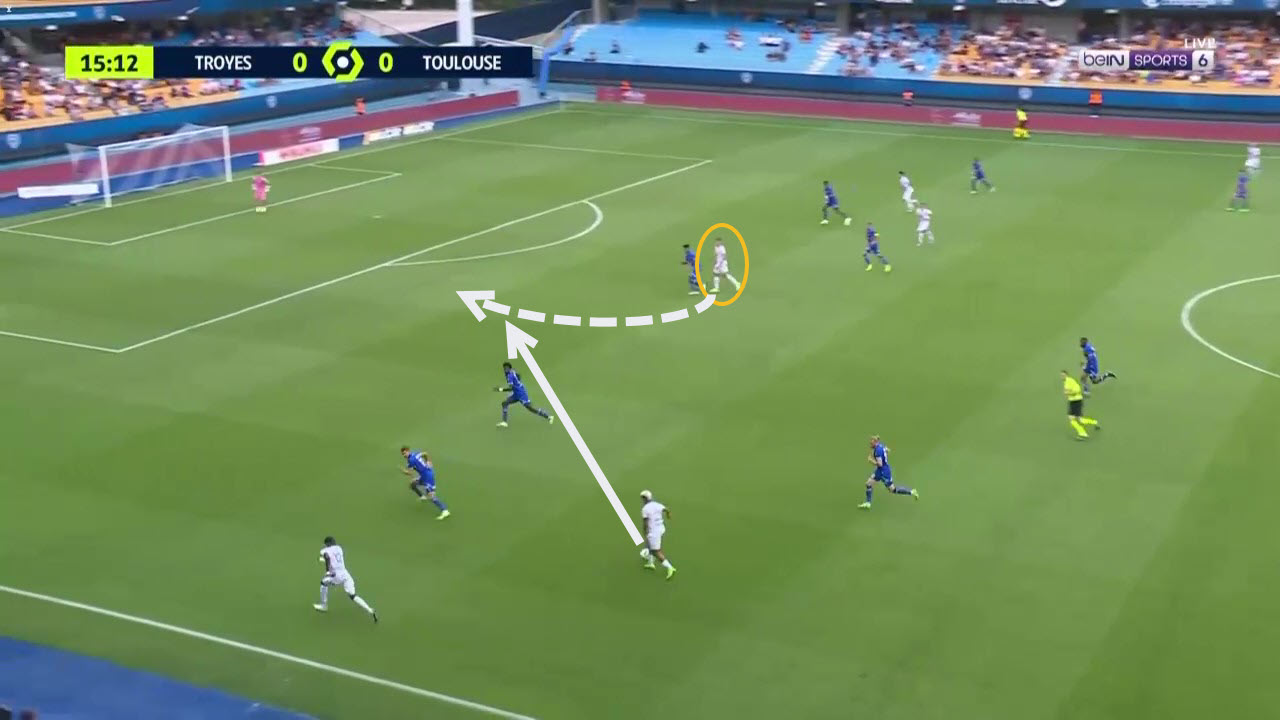 As you can see, the play opens up for Dallinga to make a run into the wide channel. However, he is not alert enough to anticipate and make a direct run. This could be because he notices an overlap and is therefore waiting for a cross into the box. But these situations need to be capitalised on and Dallinga could easily have been behind the opposition defence.

Thijs Dallinga exploded in the Netherlands last season and hasn’t quite hit the same form yet. Many things need to be accounted for as to why. Dallinga has shown really promising signs in his early days. Playing against a better quality of opposition, Dallinga has not looked out of place.

It is only a matter of time before he starts consistently finding the back of the net again.