Cody Gakpo: Is the Dutchman destined for the Premier League this summer? – scout report

Leeds United and Tottenham Hotspur have been strongly linked with a move for PSV Eindhoven winger Cody Gakpo, one of the stars of the Dutch Eredivisie this season. The 23-year-old finished the campaign on 21 goals and 15 assists in 46 games in all competitions, inevitably attracting Premier League interest.

Leeds are planning for life without Brazil star Raphinha, who is a rumored target for Barcelona, Tottenham and Arsenal amongst others, with the Elland Road club reportedly holding out for £65m. The Lilywhites have been reportedly weighing up a move for Gakpo as Raphinha’s replacement.

In this tactical analysis in the form of a scout report, we will take a look at how Gakpo plays. Furthermore in this analysis, we will get to know where his biggest strengths are in form of data.

Today, we’re taking a look at who is Gakpo and why the PSV forward is wanted by teams like Leeds United, Arsenal and Liverpool. Born in Eindhoven in the Netherlands on the 7th of May 1999, Cody Mathias Gakpo is a full Dutch international who plays for PSV Eindhoven. Gakpo began his career at FC Eindhoven before he joined PSV in 2017 thanks to a cooperation deal between the clubs that allows young players to be swapped.

Gakpo made his professional debut for Jong PSV in November 2016 at. 17. After scoring 17 goals and registering 6 assists in 25 appearances for the under-21s, Gakpo was integrated into the senior setup. He made at his PSV debut at 18 in a 3:1 win over Feyenoord in 2018 and managed to register 5 assists in less than 400 Eredivisie minutes in the 2018/19 campaign. Since then, Gakpo has been directly involved in 45 Eredivisie goals in three seasons of PSV despite averaging just 67 minutes per appearance.

But, where does he play in his team’s tactics? Cody Gakpo is a versatile forward that’s had minutes on both flanks, at number 10 and even up front despite that the Dutchman is probably at his best when playing on the left wing where he’s able to cut in onto his stronger right foot. 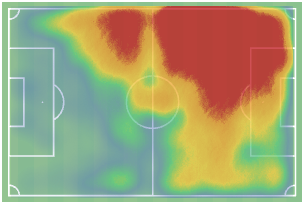 In the past two seasons, Gakpo has maintained consistency in his overall output, scoring seven league goals in the 19/20 and 20/21 season. In 21/22 he finished with 12 goals.

The Eredivisie ace stands out on a number of metrics this season, averaging 0.41 xG per 90 and 0.40 xA per 90 indicating a dual-threat not just as a goalscorer but also as a creative threat on and off the ball. In fact, that combined expected goal involvement (xGI = xG + xA) ranked him as the fourth-biggest attacking threat in the league last term. He is also a high-volume shooter, averaging 3.71 shots per 90 this season in the league.

Standing at 189cm, Gakpo is a large and imposing winger. His size allows him to hold off defenders and makes him a powerful runner, whilst his agility and acceleration make him a real live wire when the ball is at its feet. 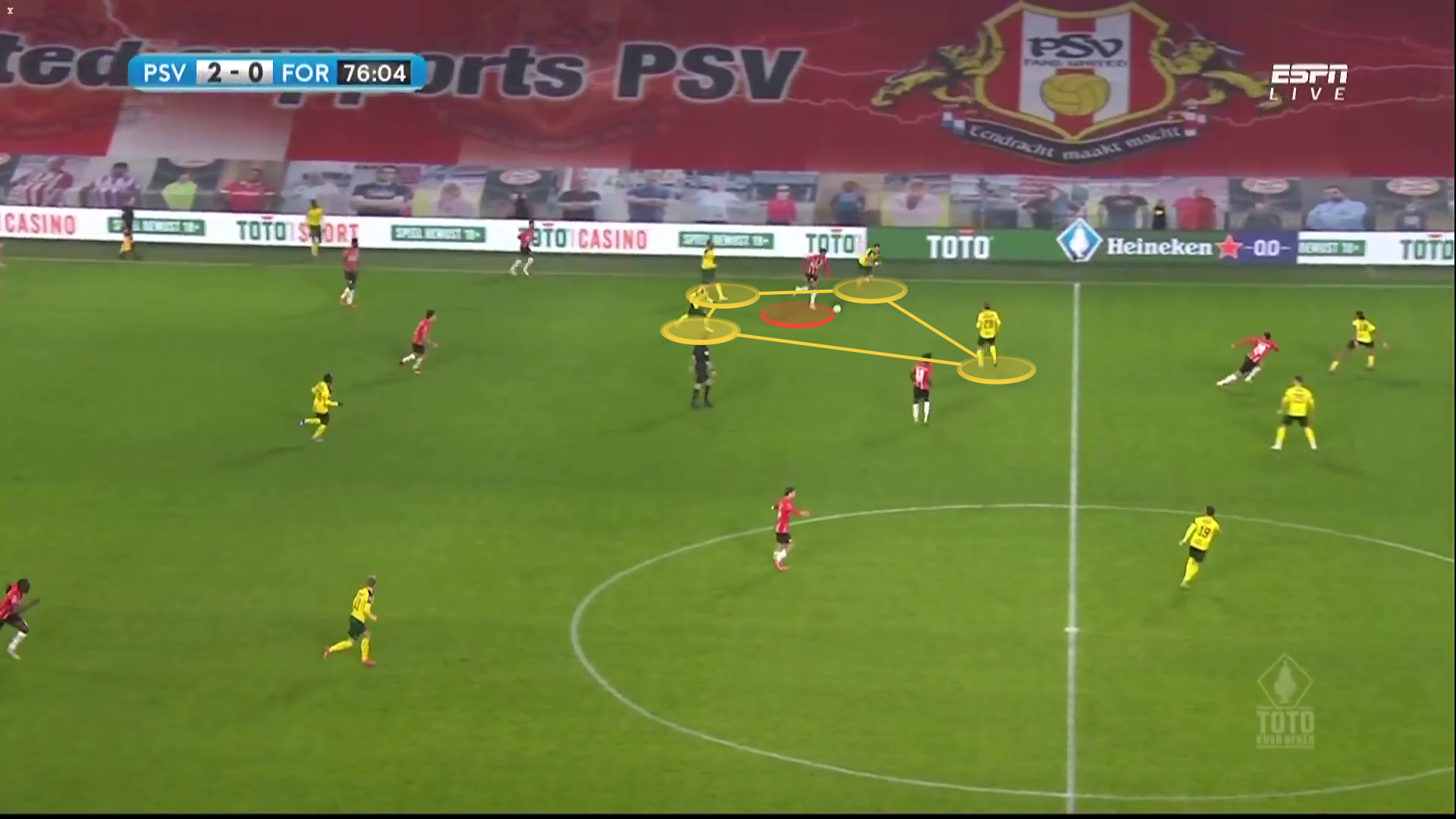 But, Gakpo isn’t all about physical attributes. He’s got a lot of technical ability, especially when dribbling but he also possesses great awareness. This allows him to make excellent use of space while he’s got the vision and creative passing to make things happen in the final third for PSV. 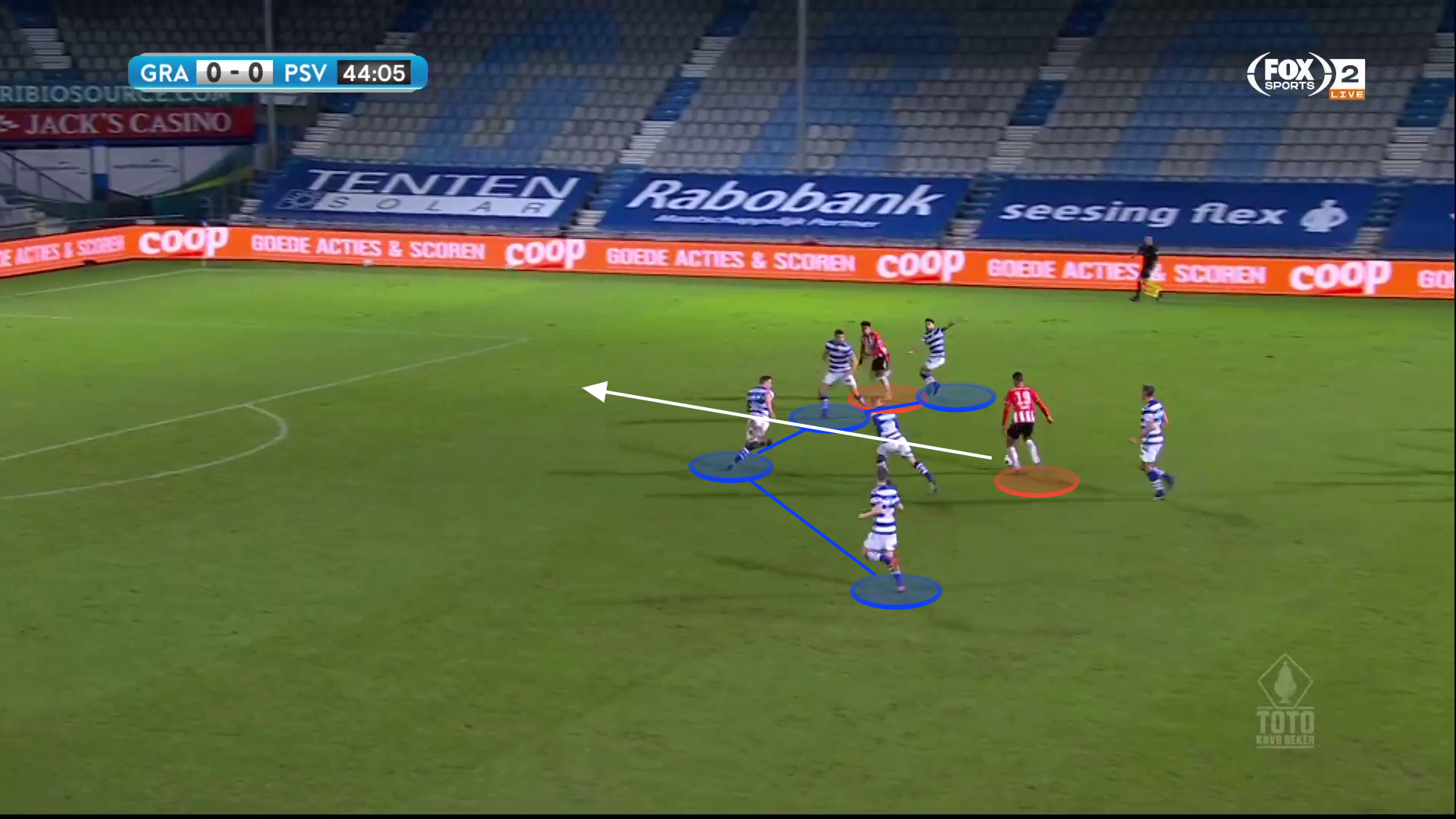 One of Gakpo’s most useful skills is his spatial awareness. Like a lot of Dutch footballers, Gakpo is a tactically intelligent player and uses intelligence to find pockets of space that he can receive in the left half-space between the opposition’s lines. This either narrows the opposition’s shape to block these passes into the forward creating space out wide for a supporting fullback. 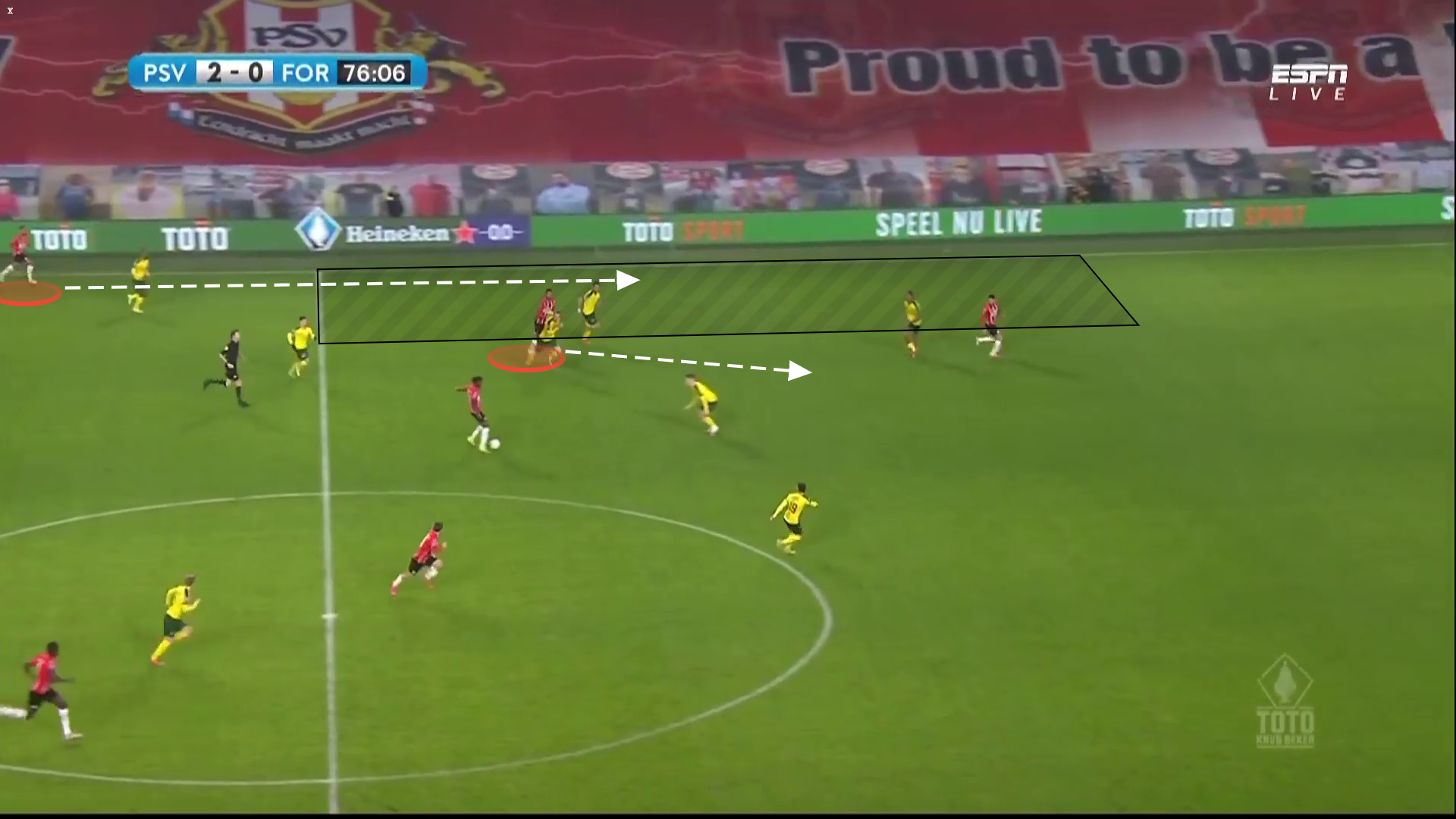 Or, it leaves Gakpo free to receive, turn and run directly at the back line. 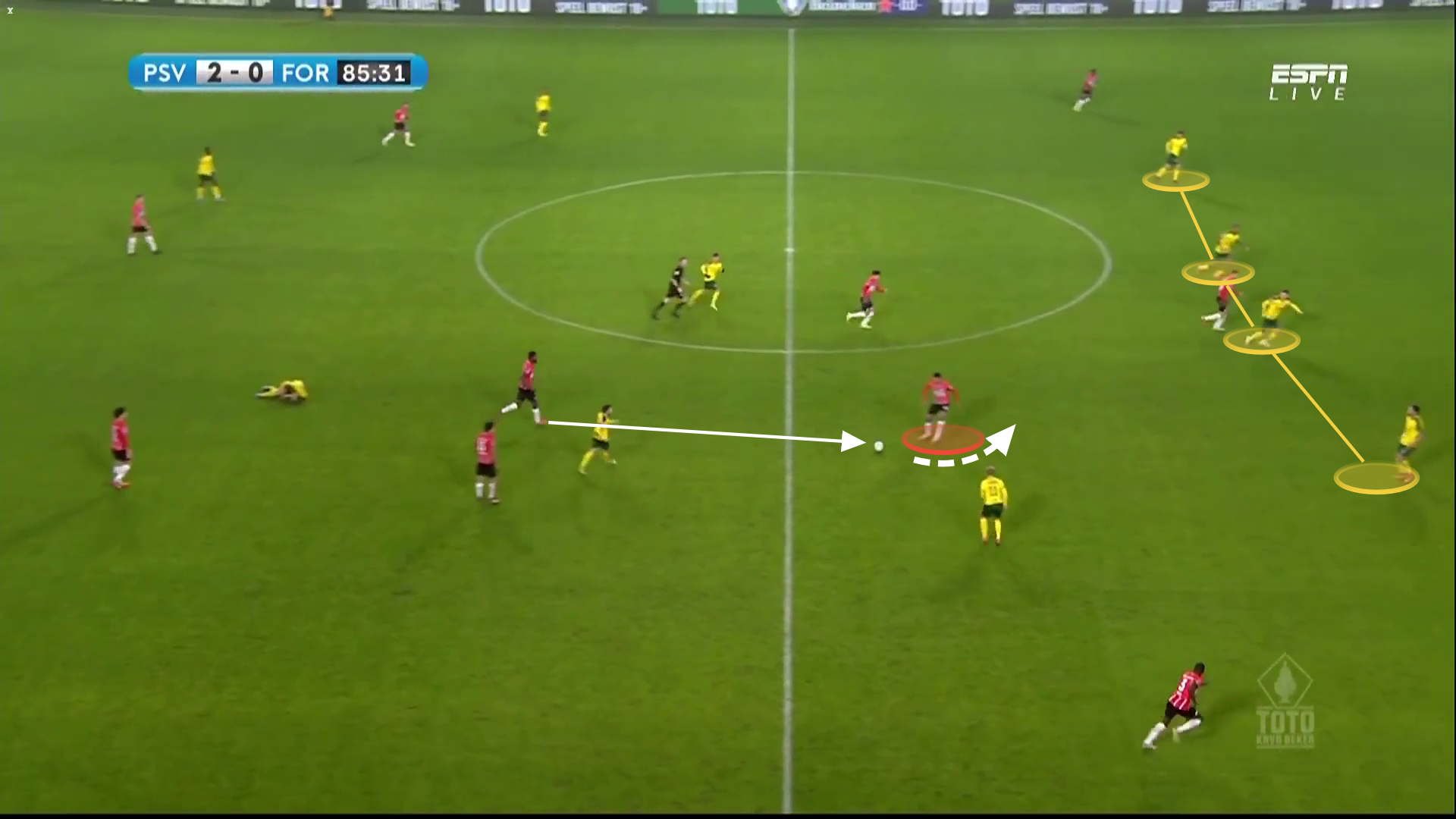 But, Gakpo doesn’t just receive centrally. There are other occasions where he holds the width leaving himself in a 1v1 situation with the opposition’s right back. These situations are arguably where Gakpo is at is most dangerous as his combination of speed, strength, agility and ball control make him almost undefendable. 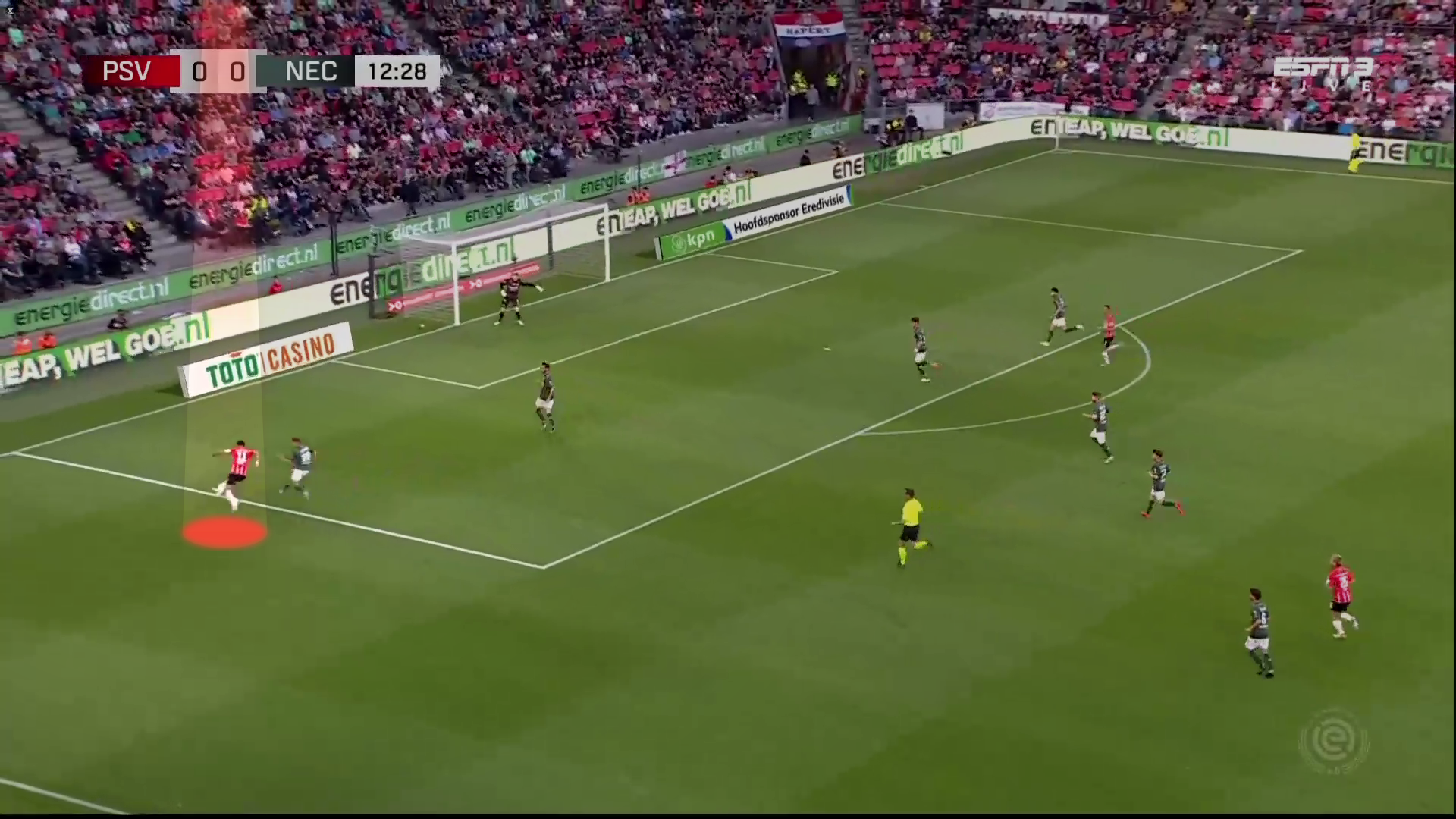 He’s not a big one for over-the-top skills. Instead, the Dutchman tends to drop a shoulder shifting the ball in the opposite direction going past the defender often following up with a creative pass to a teammate or a one-two or alternatively unleashing a powerful whipped shot.

Gakpo loves cutting inside with the ball and operating just outside the box. From these positions, he’s got a great view of the pitch with space to attack. This allows him to play balls over the top for teammates making runs on the last line, slipping through balsl in behind or combining with his fellow teammates. 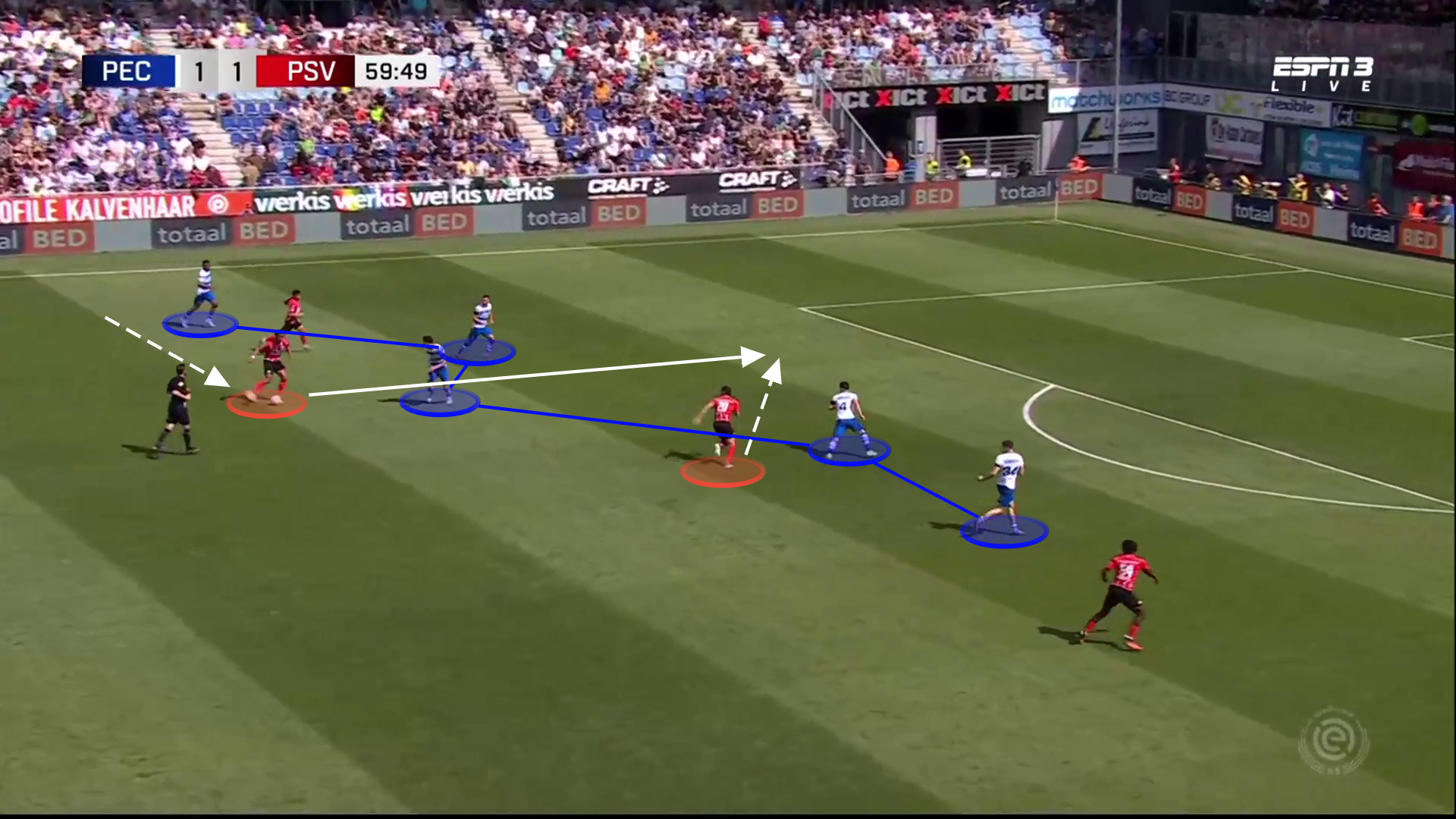 His well-rounded skill set and the variety of options made him one of the leading creators. This season, in fact, only creative king Dusan Tadic has created more chances per 90 than the 22-year-old.

What’s also a good sign is that Gakpo definitely doesn’t shy away from defensive duties whilst he offers a big threat in the transition which often sees him stay in aggressive counter-attacking positions out wide. He does get back to help out with his full-back which is a great illustration of his determination and work rate. 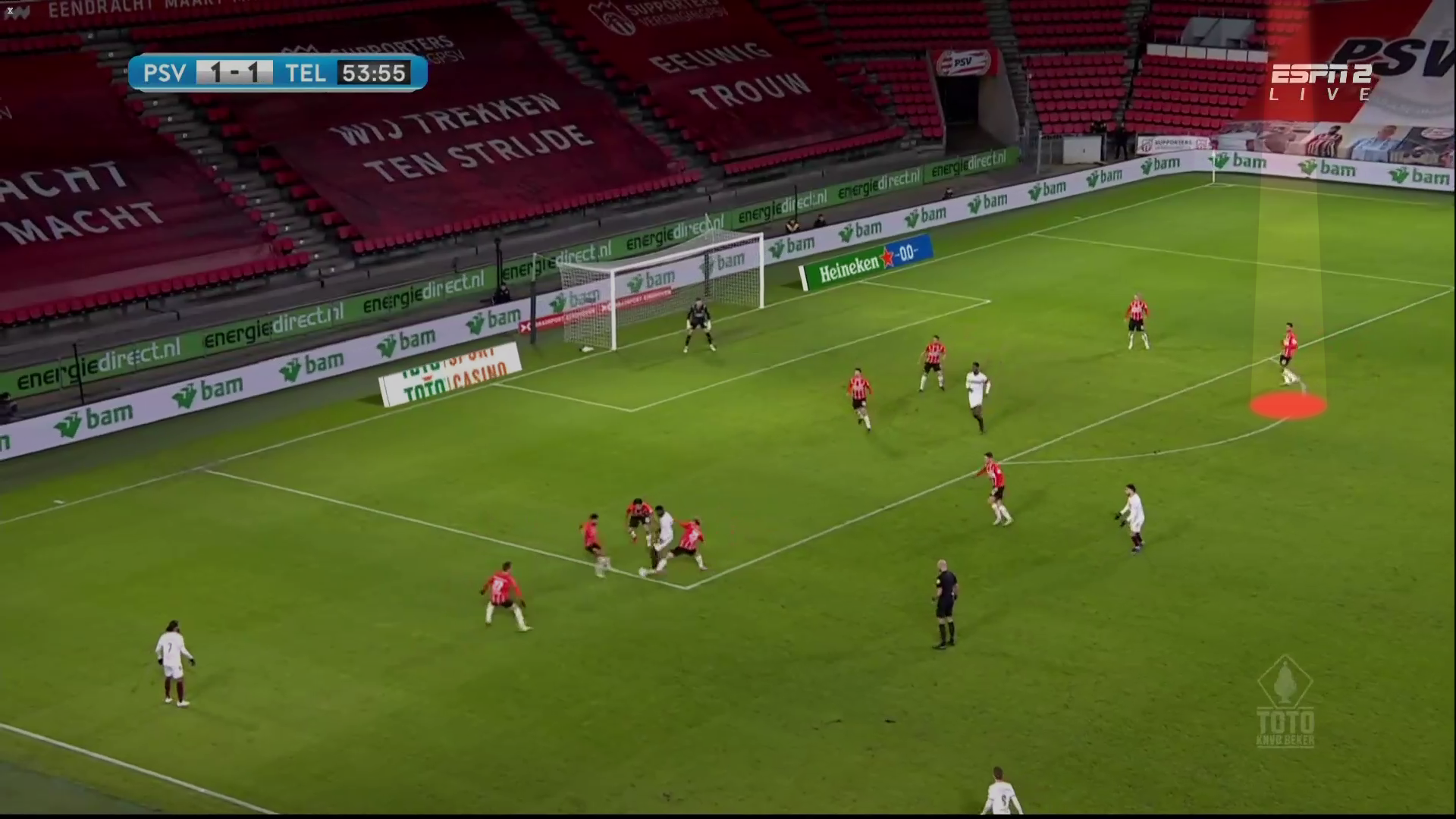 Whilst a very bright talent, Cody Gakpo isn’t quite the finished article. There are times when his first touch lets him down. Like all young forwards, he can make wrong decisions – especially when dribbling but this is all to be expected. He could also improve aerially for such an imposing winger. At 189cm, Gakpo could also play as a wide target man, but he’s never scored a goal with his head in the league. Adding this kind of play to his game would truly make him a complete wide man.

Gakpo combines an icy composure in the final third with the vision for a key pass or an important switch. Being over 6ft tall, Gakpo’s height allows him to cover long distances with larger strides on the ball, his slender body frames make him a tricky man to mark as well. He is likely to move in this summer transfer window. He is ready for the next step in his career. However, he has still lots of things to improve on.

Therefore, a move to another country and a bigger league would probably help him become a better player. Most importantly for Gakpo is getting playing time in order to show how good he can be. Stylistically, he is a great fit for a number of teams in the Premier League, including Leeds should they be forced to let go of Raphinha this summer.