Northampton Town enjoyed an unlikely playoff victory to seal promotion to League One last month. After sneaking into seventh place on points-per-game, the Cobblers overturned a two-goal deficit in the semi-final. They lost 2-0 at home to Cheltenham Town, before shocking the Robins by winning the return leg 3-0 in Gloucestershire. Northampton followed that up by thrashing Exeter City 4-0 in the final, at an eerily empty Wembley Stadium. The humbling victory was a masterclass in route one football, and central defender Charlie Goode was right at the heart of it, as he has been for the Cobblers all season.

This scout report will provide a tactical analysis of his role, and what he brings to a Northampton side who will have to adapt to playing at a higher level next season.

24-year-old Goode is an uncompromising and powerful central defender. Standing at 6ft 5, the Watford-born man is an aerially dominant defender, who won a fantastic 70.78% of his aerial battles last season. He played in every single minute of all of the Cobblers’ league, playoff and FA Cup campaigns. The only games he wasn’t involved in were their League Cup and EFL Trophy encounters.

Northampton, managed by former Manchester City defender Keith Curle, mainly played a 3-5-2/3-4-1-2 last term. Within those tactics, Goode often played on the right side of the back three, as he has the acceleration and power to defend in wider areas. 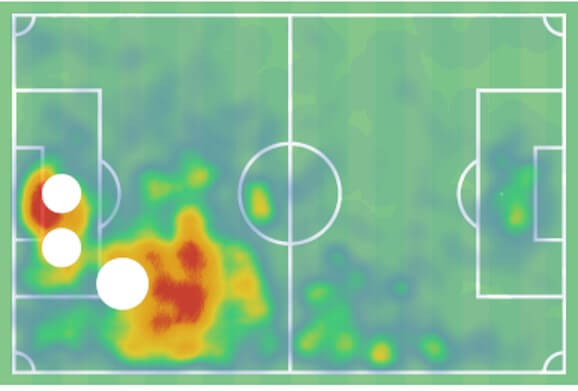 As you can see from his heatmap, Goode is also comfortable advancing into more forward areas down the right channel and half-space to become an attacking threat for his team. The club captain, who is a product of the Fulham academy, managed to chip in with three goals and two assists last season.

The analysis will now focus on Goode’s positional play. Below is a perfect snapshot of how he and his teammates defend when the ball is in the wide areas. 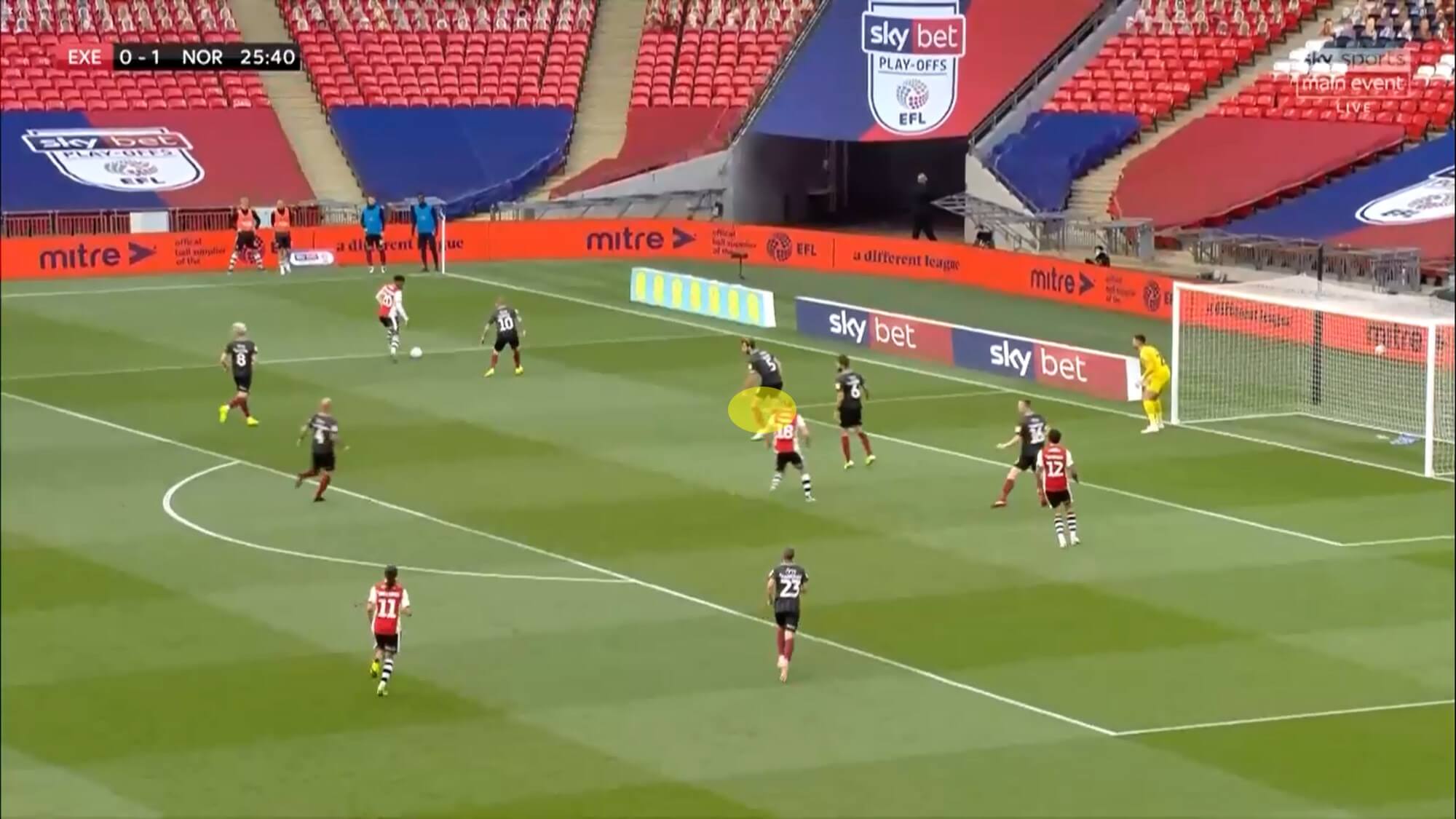 Northampton’s back three tend to focus on crowding central areas when the opponents have the ball out wide. Usually, they’ll be spaced along the width of the six-yard box, just in front of it. That can change depending on where opposition strikers are. Goode will position himself on the right corner of the six-yard box. These areas are the most dangerous when the ball comes in, so Northampton do a good job of protecting their goal from crosses. It also means they often outnumber opposition strikers. As there are three central defenders instead of two, they often enjoy 3v2 numerical superiority in this situation.

Northampton only conceded seven headed goals last season, lower than the league average of 8.29. As captain, Goode is responsible for talking to his teammates and organising the position of that backline, which is impressive for someone who is still relatively young.

The image also shows how the former Scunthorpe United man doesn’t get caught ball watching. As he’s anticipating a potential cross, his body position is sideways on so he can see the ball and any potential runner who would join the attack by making a run into the box. He keeps glancing up, making sure that he’s able to see if an Exeter player makes a late run into the box. As he does this, he bends over slightly. That’s so he’s able to change direction quickly if he’s faced with an opposition runner, or if his teammate Nicky Adams is beaten and he needs to go towards the ball to actively block the danger.

The next image shows Goode’s ability to read the game. 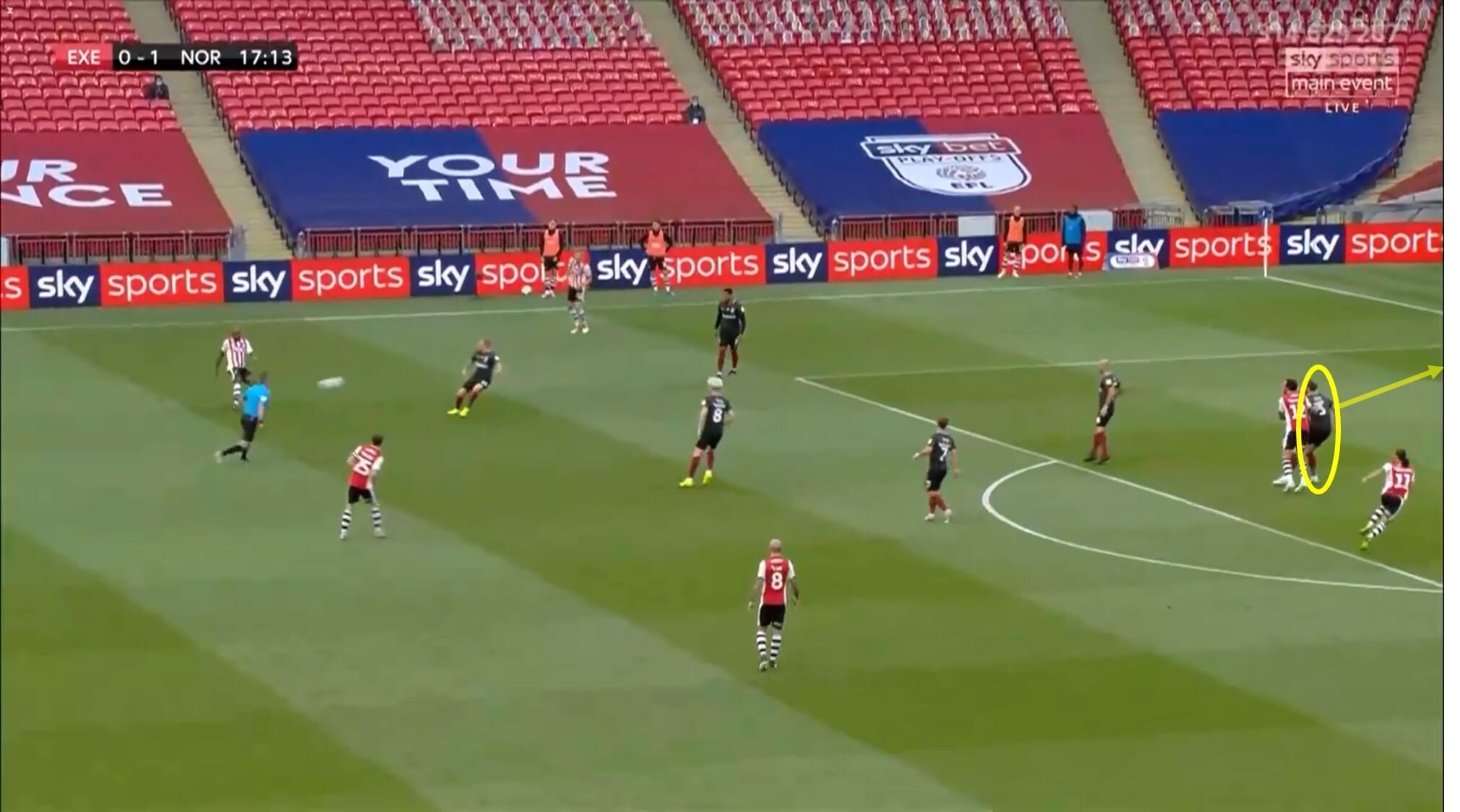 Exeter’s Nigel Atangana is about to play a high ball into the area, aiming for the head of striker Ryan Bowman in space. But just as he’s about to play it, Goode starts to drop off a little bit so he can get to the ball first. His sideways-on body positioning means he can react quickly, but he’s also able to block the run of Bowman. This makes it difficult for the striker to get past him. He’s then able to win the header with relative ease. Because he judges the flight of the ball well, he’s able to get under the ball and get distance on the header, as opposed to weakly flicking it up in the air or behind for a corner.

Goode’s impressive positional sense and reading of the game is backed up by the performance data. He averaged 11.33 interceptions per 30 passages of opposition possession, which was the eighth-highest out of all central defenders in the division. He blocked an average of 0.92 shots per 90 minutes, which was the seventh-most in the league. This shows that’s he’s often in the right position to help his team keep the ball away from danger.

An area Goode could improve on is his ability to play the offside trap. Below is an example of him getting caught out. 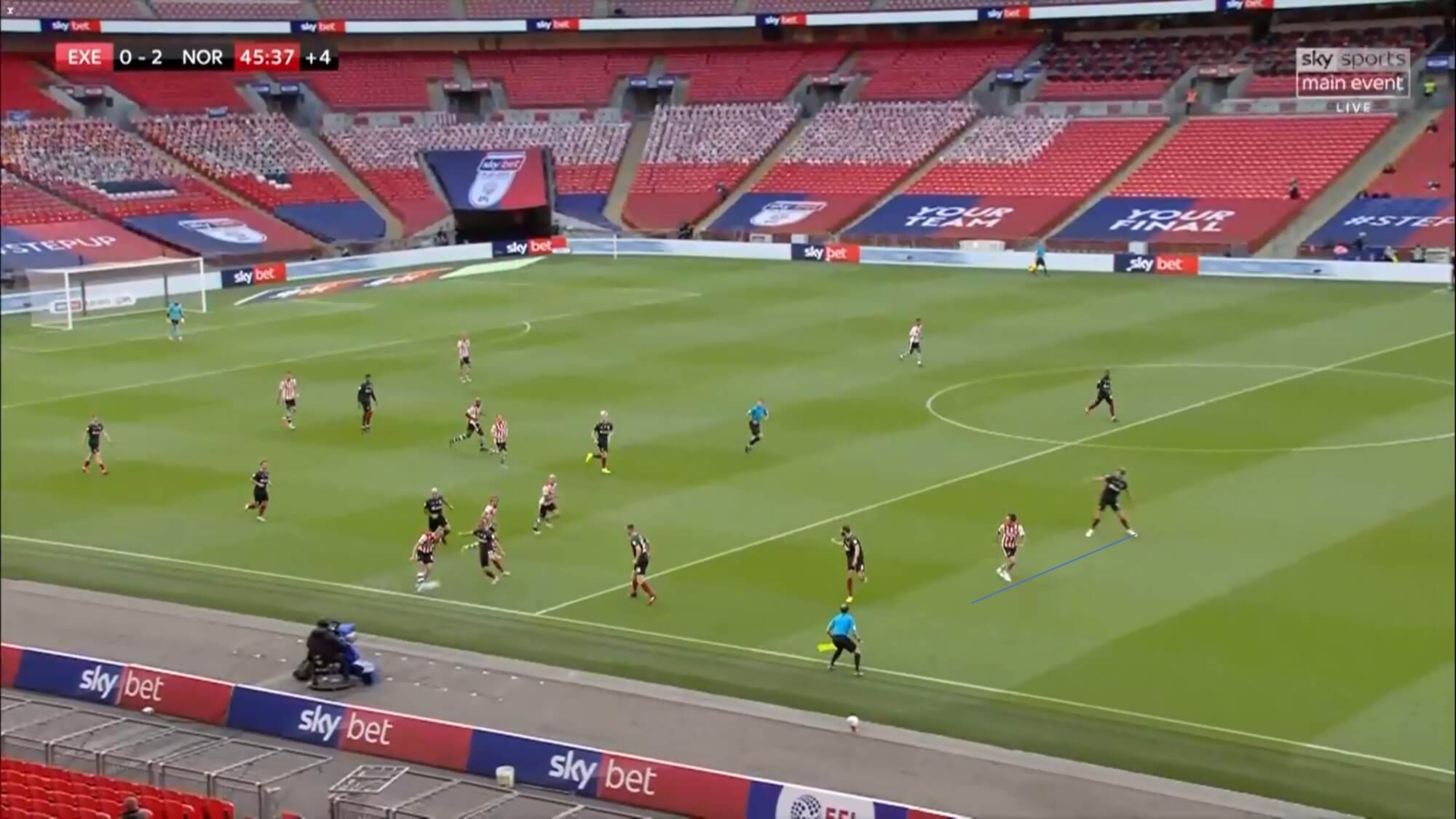 As you can see, he doesn’t quite get it right and he just plays Ryan Bowman onside. This is a risky move, and he could have been punished if he came up against a quicker opponent.

Thankfully for Goode, despite his height, he’s certainly no slouch. As you can see in the image below, he’s able to make up the yards on Bowman and forces him to take the ball out of play. 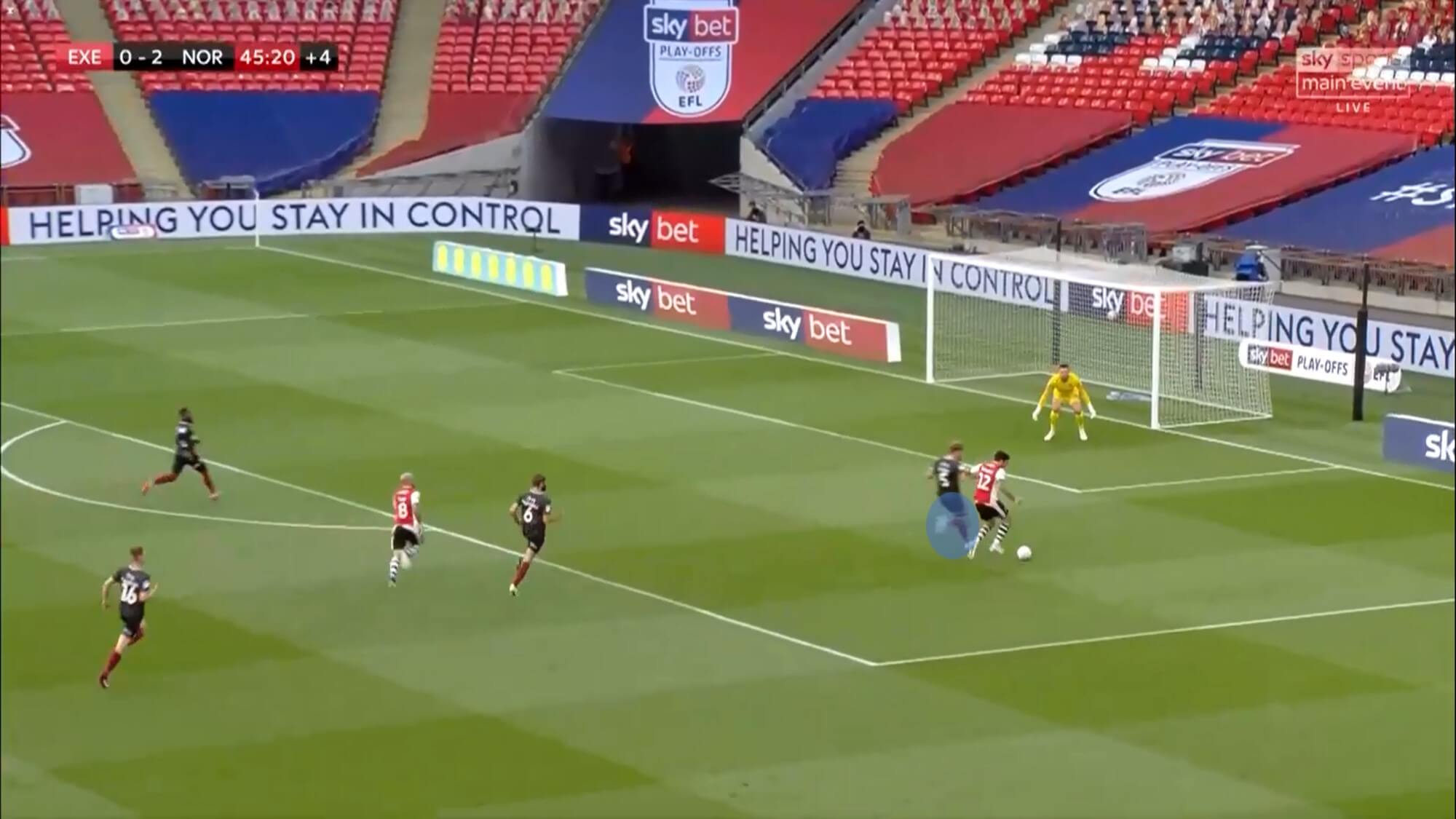 As he plays on the right side of a back three, he has to be comfortable defending in wide areas. This is especially the case in defensive transitions when the right wing-back gets caught too high up the pitch. In the image below, you can see he’s been dragged out wide and has to defend in a 1v1 situation. 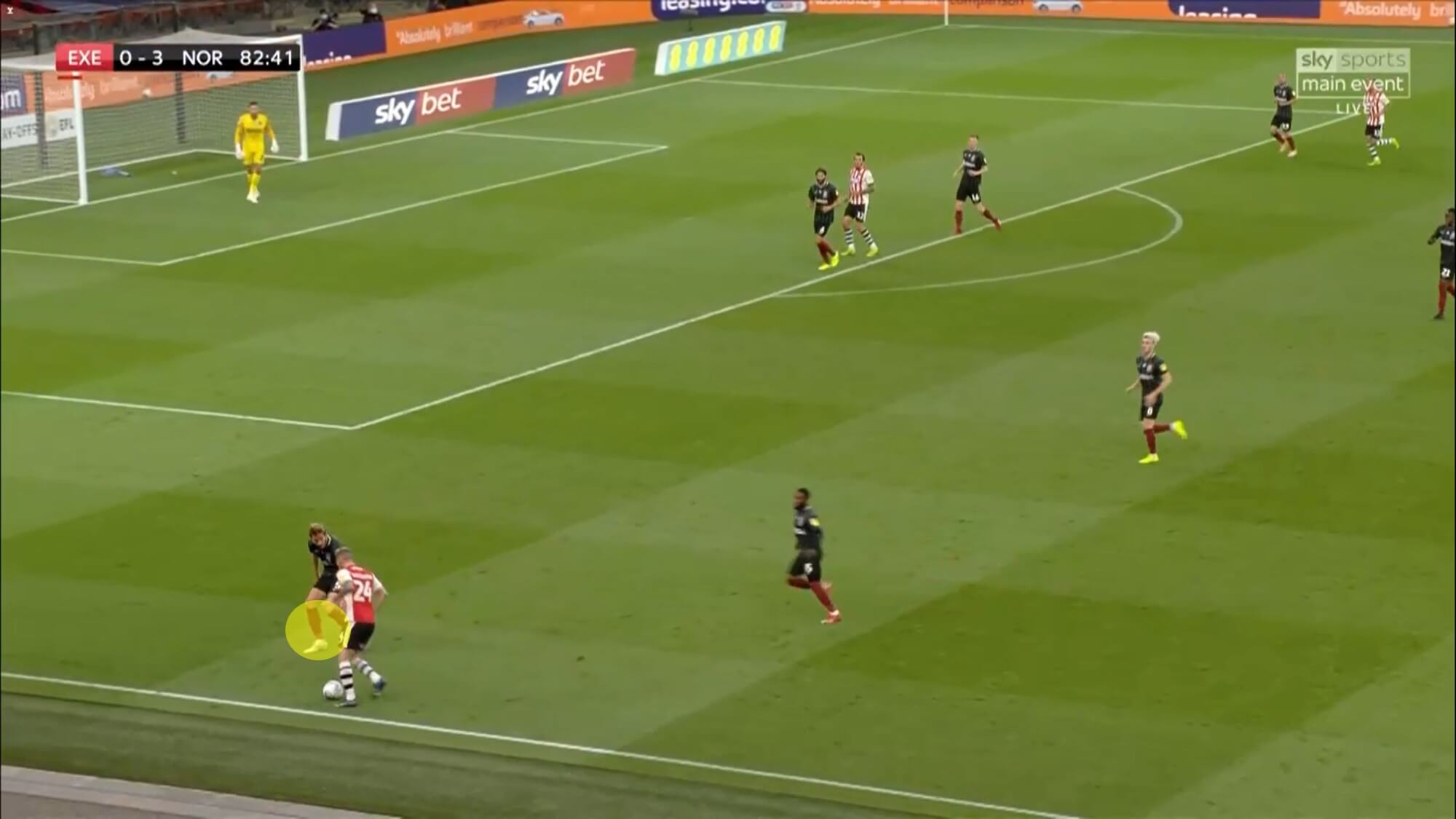 A lot of defenders hate being dragged out wide, but Goode seems to relish it. He shows his opponent down the outside, knowing that because he’s closer to the touchline there’s less space for him to run at Goode without taking the ball out of play. 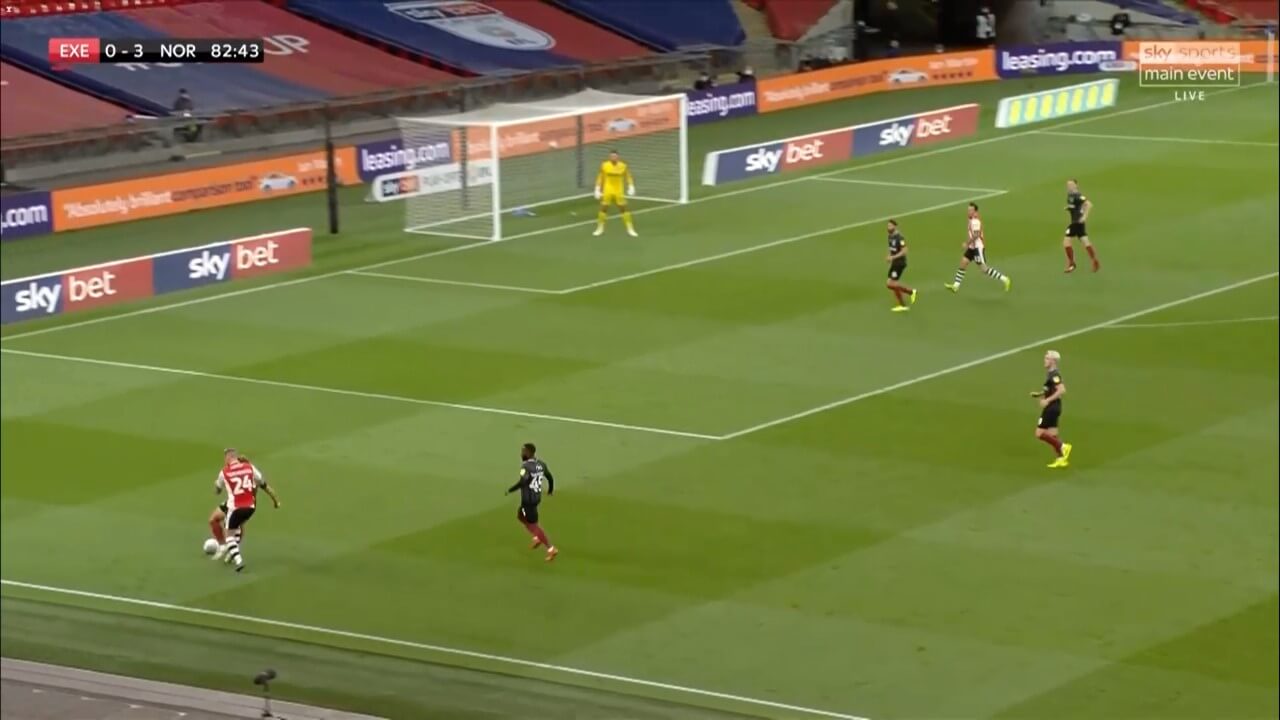 The former Scunthorpe man simply waits for him to take a slightly heavy touch, before confidently nipping in. Due to his upper body strength, he’s able to powerfully position himself between the man and the ball. Therefore, the Exeter player would have to foul him to get to the ball.

In possession, Northampton focus on getting the ball up the pitch as quickly as possible. They averaged 58.89 long passes per 90 minutes, which was the fourth most in League Two. As well as that, the Cobblers only played an average of 8.12 passes per defensive action against them: the third-lowest in the league. So the focus certainly wasn’t on keeping hold of the ball for the sake of it.

They often played the energetic Callum Morton alongside target man Vadaine Oliver upfront. This meant that the centre backs had the option of playing a cross-field pass up to Oliver’s head, or a defence-turning ball into the channels, with Morton chasing down every single lost cause. Goode’s passing accuracy was only 64.78%, but this is because Northampton’s tactical setup requires the back three to play those percentage passes. These types of balls are more likely to result in their team losing possession than a ten-yard pass into midfield.

When you watch Goode play, you realise that he’s not a bad passer of the ball at all. Below is an example of the type of ball he often plays into the channels. 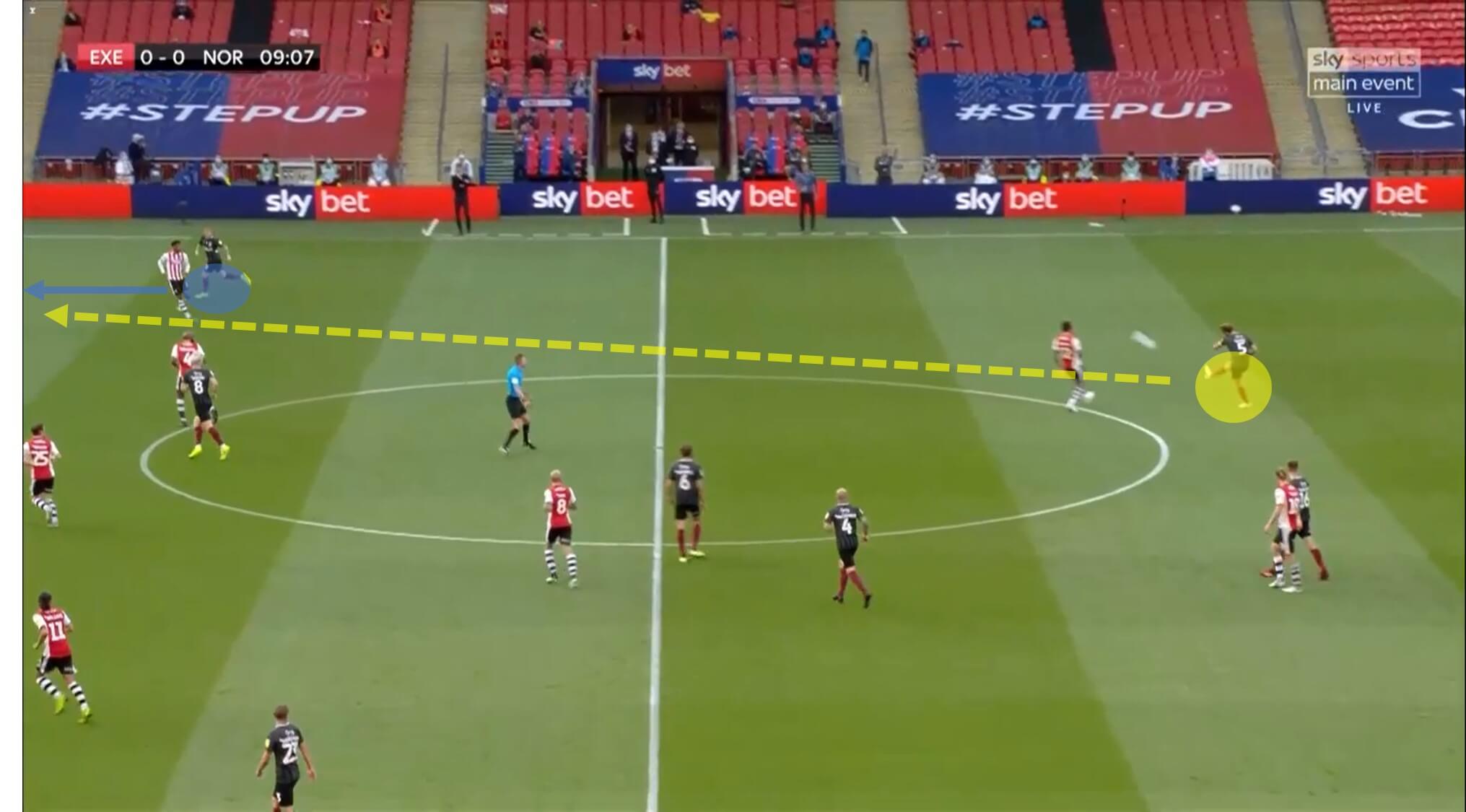 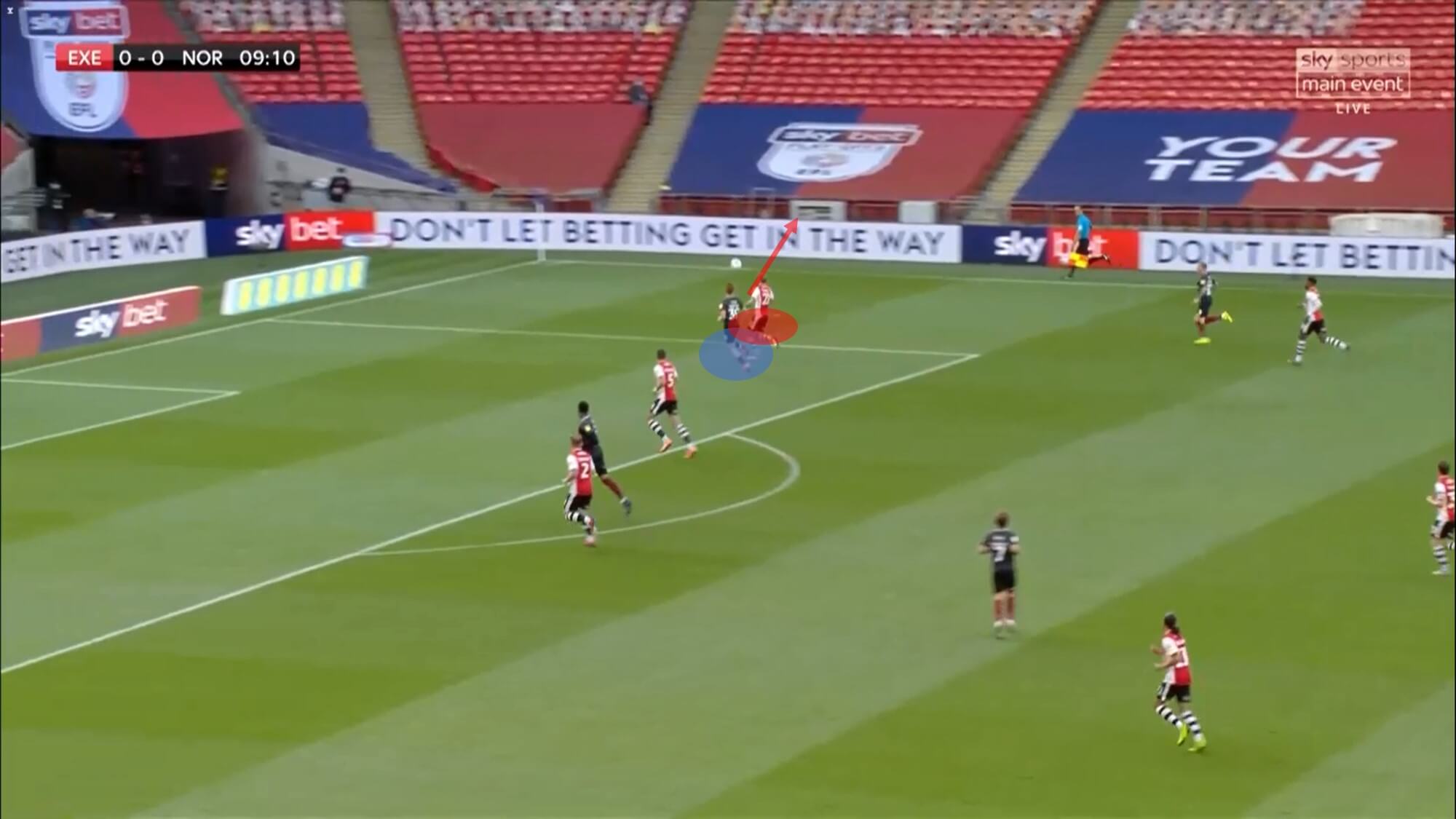 He curls this ball into the channel, for West Bromwich Albion loanee Callum Morton to chase. Although the pass doesn’t reach him, it turns the defence and gets them running towards their own goal with a pacey, energetic striker breathing down their neck. Because of this, the Exeter man is forced to put it out for a Cobblers throw-in. So that pass from Goode wouldn’t be classed as ‘successful’ as it didn’t reach its intended target, but it forced a throw-in high up the pitch, and Northampton can make the most of these situations because Goode has a long throw up his sleeve.

The long throws are a very simple way of putting teams under pressure, but they’re so effective. It’s not only about the first phase that puts teams under pressure, but it’s the second phase after the ball has been temporarily cleared. Exeter found out about this in the play-off final, as that’s how Northampton scored their opening goal. As you can see from the image below, the Grecians are defending against that weapon of a long throw from Goode. 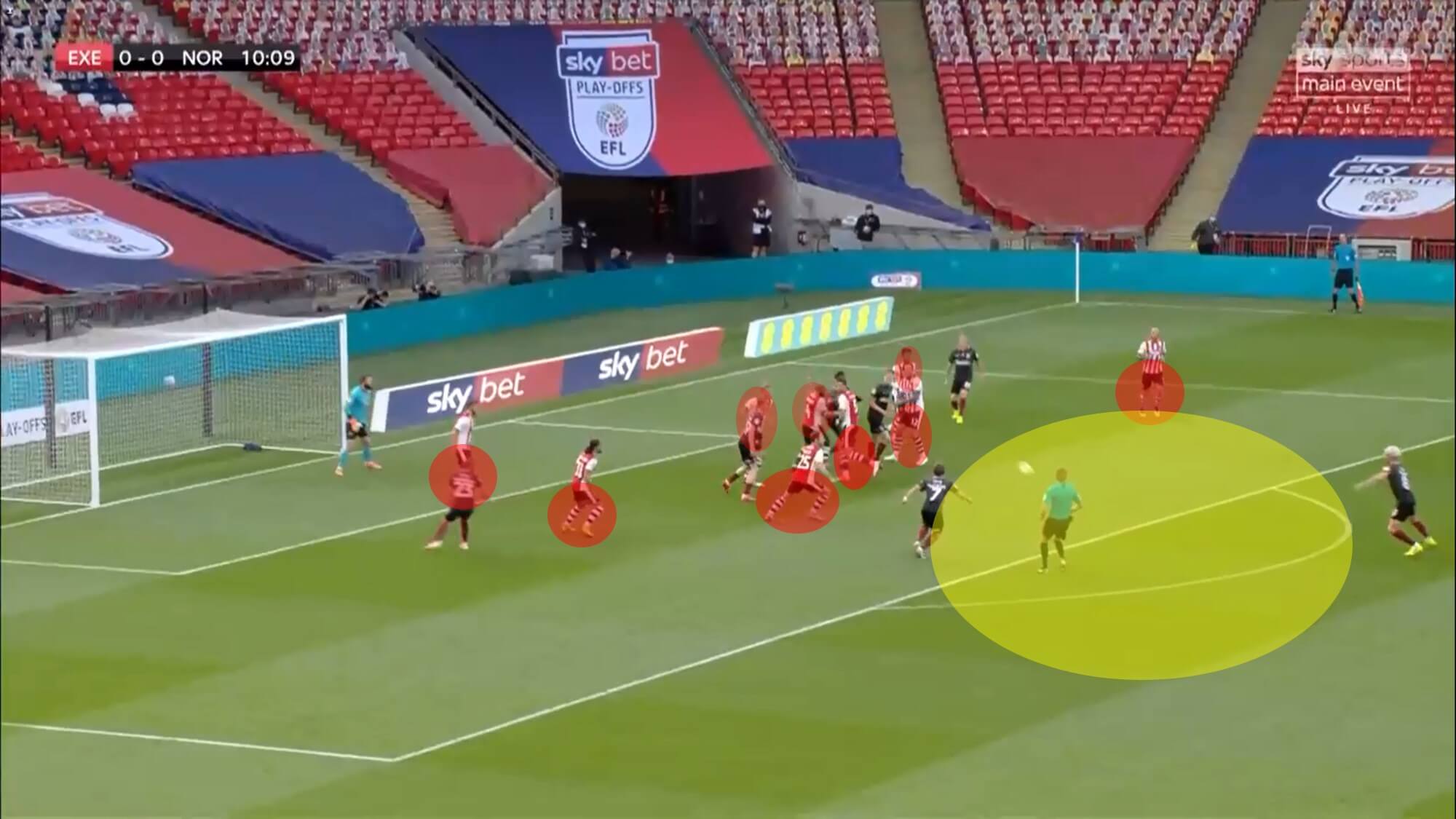 Because Northampton overload the box from these situations, most of the opposing team are pegged back. This leaves space just outside the area for Northampton to get a shot off from the second phase, and Ryan Watson managed to score from this area. Northampton use the weapon of Goode’s throw in to assert their dominance on teams. Every time they win a throw-in their attacking half, they manage to peg their opponents back. This means that the second balls tend to be contested in the team’s defensive third, making it hard to get out and start attacks of their own against the Cobblers.

It’s not just the weapon of long throw-ins that make Goode an attacking threat. Due to his height and physical presence, he’s a big threat from set-pieces when he pops up in the opposing penalty area. He’ll also take up advanced positions from open play, in case the Cobblers have the ball in the final third but need to recycle possession, due to more progressive passing lanes being blocked by the opponents.

Goode will even sometimes overlap the wing-back to create 2v1s in wide areas. 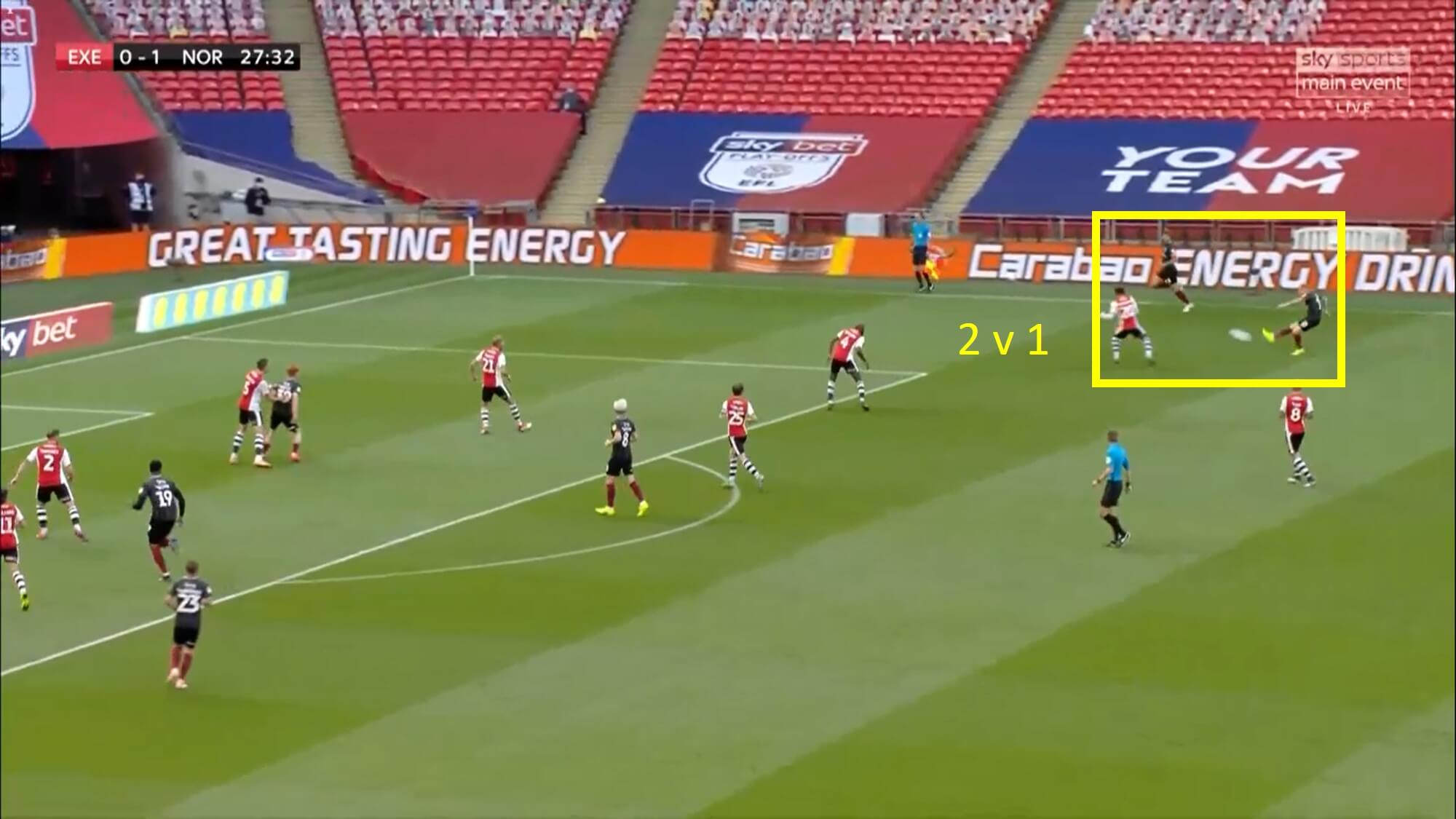 In the image above, he’s overlapping Nicky Adams to create an overload down the right flank. This creates a decisional problem for the Exeter wing-back. If he presses Adams too tightly, he’ll leave Goode open for a simple pass. So he stands off the Northampton wing-back, which gives him that extra time and space to deliver a quality ball into the box.

A weakness of a 3-5-2 system is that it can be more difficult to create wide overloads, as there isn’t a full-back playing behind a winger like there is in a back four. The impact of this can be mitigated by allowing a centre back with mobility to overlap in a wide area if the situation allows, which Goode can do well.

His pro-activeness in advanced areas gets him involved in a lot of offensive duels per 90 minutes, as you can see in the graphic below. 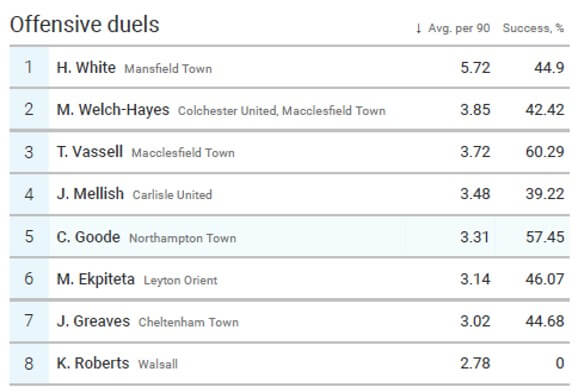 It’ll be very interesting to see how Goode handles the step up. He looked like a Rolls Royce of a defender in the fourth tier, so it’s unlikely that he’ll struggle to handle a relatively small step up. However, it’s not a foregone conclusion that he’ll remain at Sixfields for next season. Cobblers chairman Kelvin Thomas recently said that he wouldn’t be surprised to see interest in him from Championship or even EPL clubs in the summer. At the age of 24, he’s got a few more years before he’s likely to reach his peak. If he was to move into the top two tiers, it would be fascinating to see how he’d cope if he went to a club who focused on playing out from the back. That’s something he isn’t expected to do within Northampton’s tactics.