The Bundesliga has successfully ended its season two weeks ago. While the players enjoy their well-deserved vacation, managers and coaches are trying to plan the upcoming season. This, however, is by no means an easy task. For all clubs, revenues dropped significantly and the developments on the transfer market are still hardly predictable.

One solution for these problems of uncertainty can be the clubs’ academies and the promotion of young talent. Generally speaking, a constant and sustainable youth development not only helps from a sporting but also from an economic perspective which is even more important at the present time. In this data analysis, we will take a closer look at the last Bundesliga season and the clubs’ use of academy players. We will conclude this analysis by taking a look ahead at the squads for the next season.

First of all, we examine the number of academy players and the percentage of minutes they received in relation to the total amount of minutes available. When looking at the graph, we can see a relatively unequal distribution with some obvious outliers. 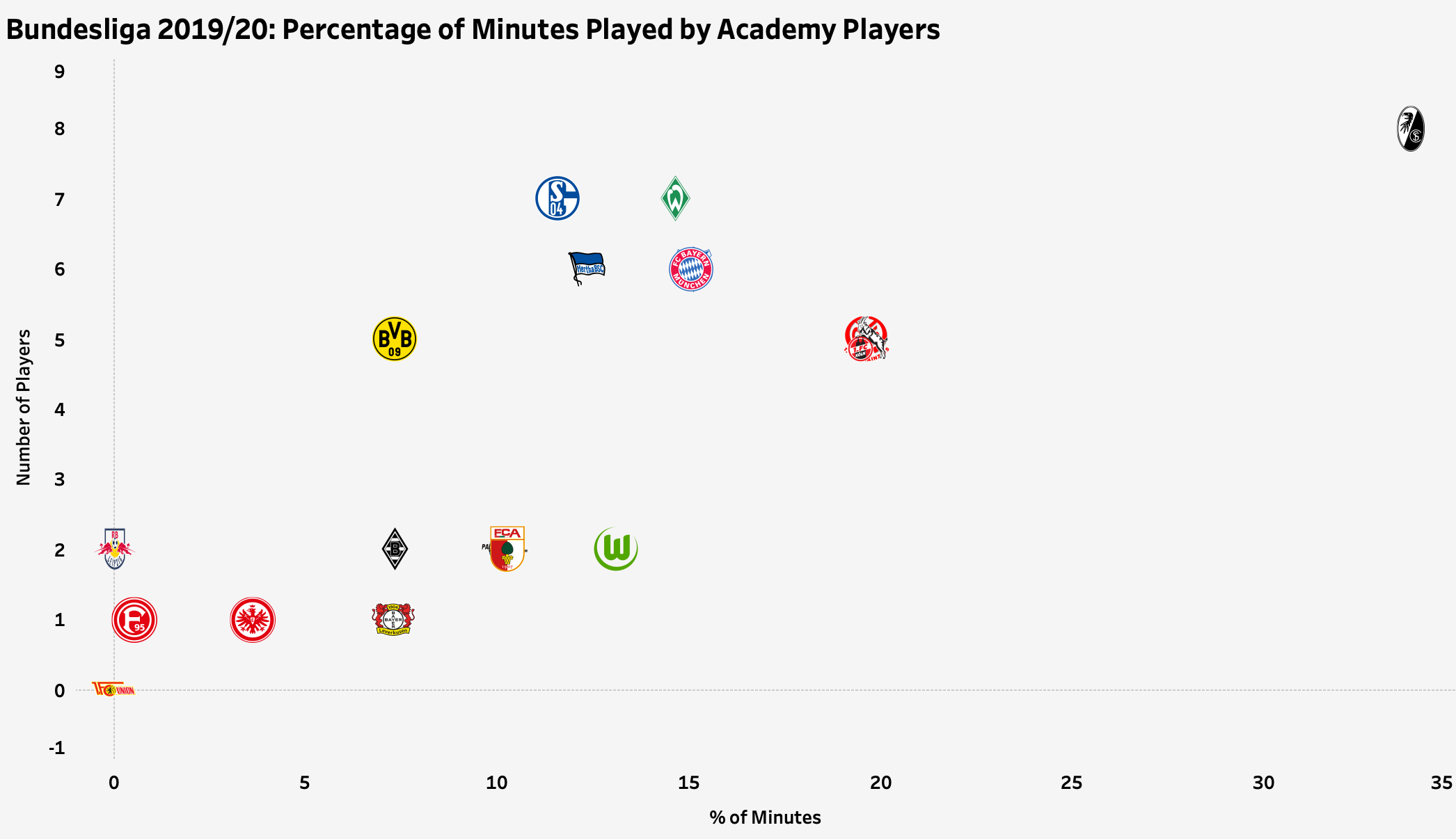 Let’s look at Freiburg, who had a great season by their standards. Coach Christian Streich used eight academy graduates and played them almost 35% of all minutes. Three of them even saw more than 90%. Therefore, it’s not an exaggeration to say that they played a big part in Freiburg’s success. However, it should also be mentioned that their average age is already 27, indicating that they have to look for some youngsters that grow into regular starters at some point.

Two other positive examples that stand out are Mainz and Cologne who have very similar numbers and overlap. The interesting point about Cologne is the fact that they allowed three players to make their debut, which is only surpassed by Schalke and Bayern. Beyond that, these players even became regular starters for many parts of the season. Especially Noah Katterbach and Ismail Jakobs were trusted, and the youngsters paid back with great performances. The disparity between debutants from the own academy and the amount of time on the pitch is illustrated below, also including Borussia Dortmund winger Giovanni Reyna. 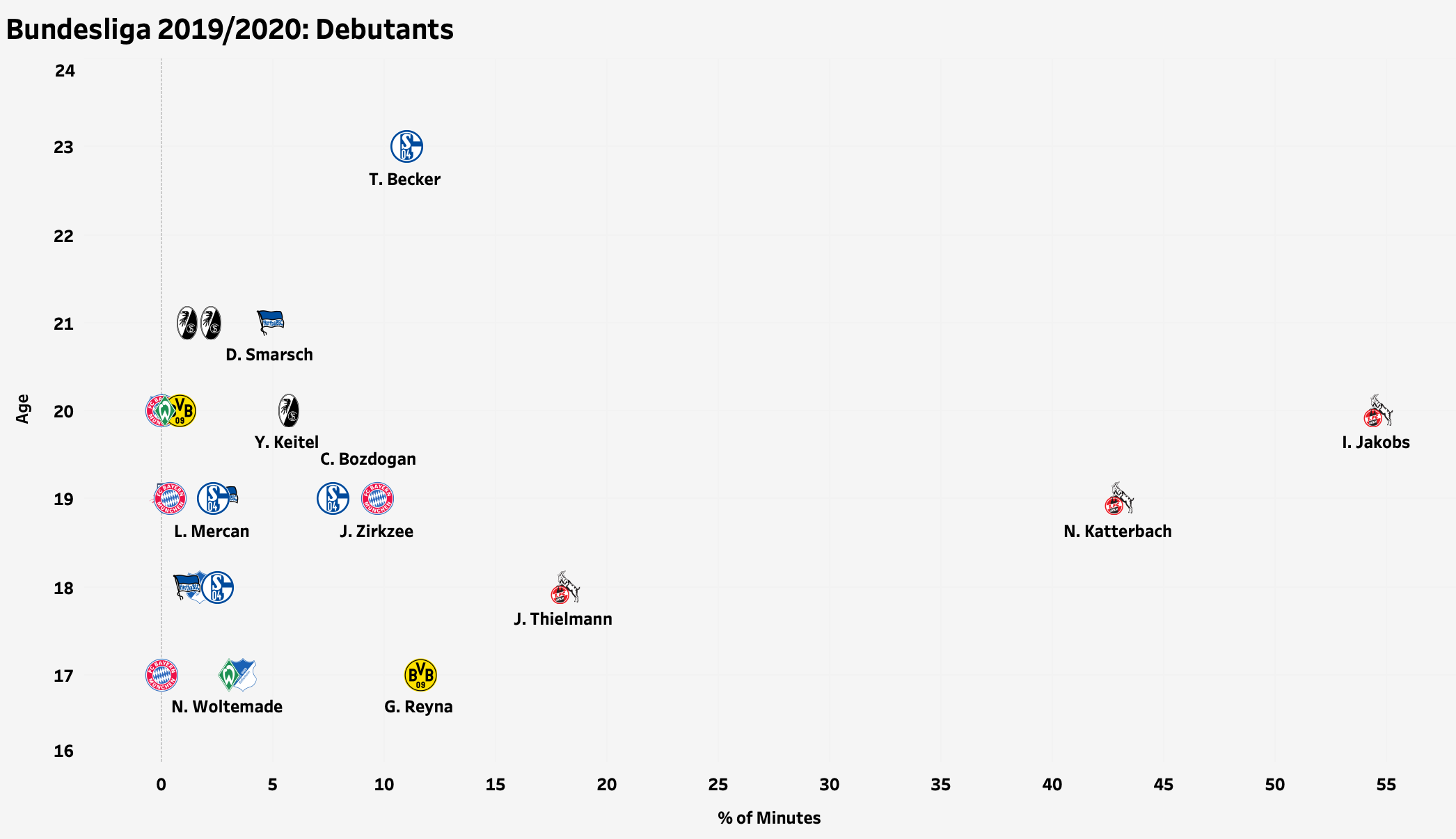 Coming back to the first graph, serial champion Bayern Munich also look quite promising with six players and around 15%. Besides, in Joshua Zirkzee, they might have finally found another player from their own academy who can follow the footsteps of Alaba, Kroos & Co. However, currently Bayern’s relatively high percentage of minutes comes basically down to two players: the aforementioned David Alaba and Thomas Müller. We will take a closer look at this phenomenon of one or two players skewing the results in the next section.

On the other end of the spectrum, there are clubs like Union Berlin or RB Leipzig, who used their academy players practically not at all.

Now that we gained a first impression of the use of academy players in the Bundesliga, it’s worth pointing out that these statistics are usually driven by one or two key players, who are regular starters. While these players see significant minutes on the pitch, other youngsters only see a fraction of that. This becomes obvious when we look at the next graph, illustrating the percentage of minutes and the average age of every player. 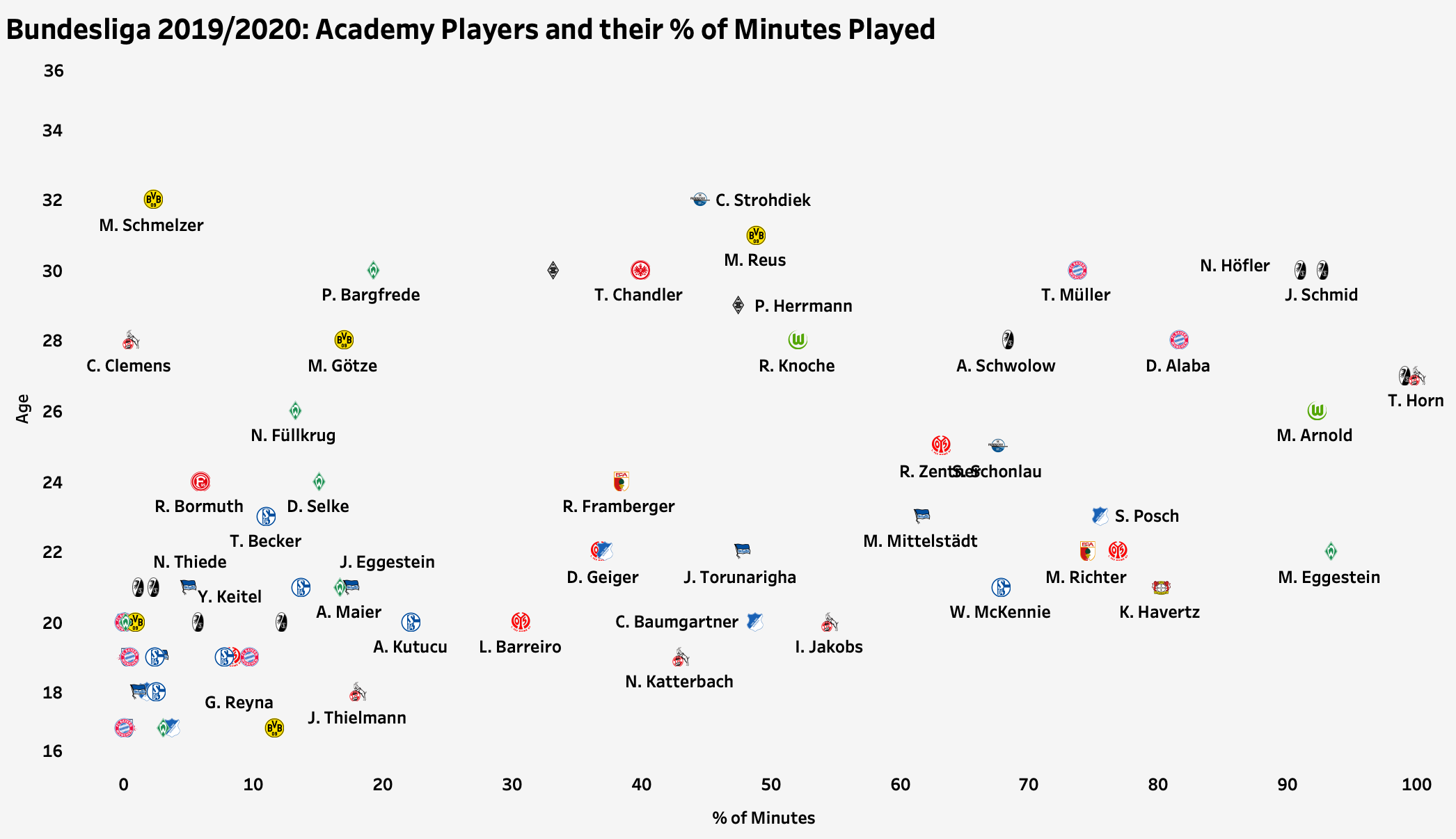 When looking at Bayern again, we can see Müller and Alaba in the upper right corner, while the other four players sit in the bottom left corner. This disparity is visible for almost all clubs and, of course, also a result of the very small sample size that we’re looking at.

Another graph providing evidence for this phenomenon can be seen below. Once we exclude players with less than 500 minutes, we can see a clear drop off for many clubs, first and foremost Bayern Munich, whose number of players decreases from six to two while the percentage of minutes stays the same more or less. 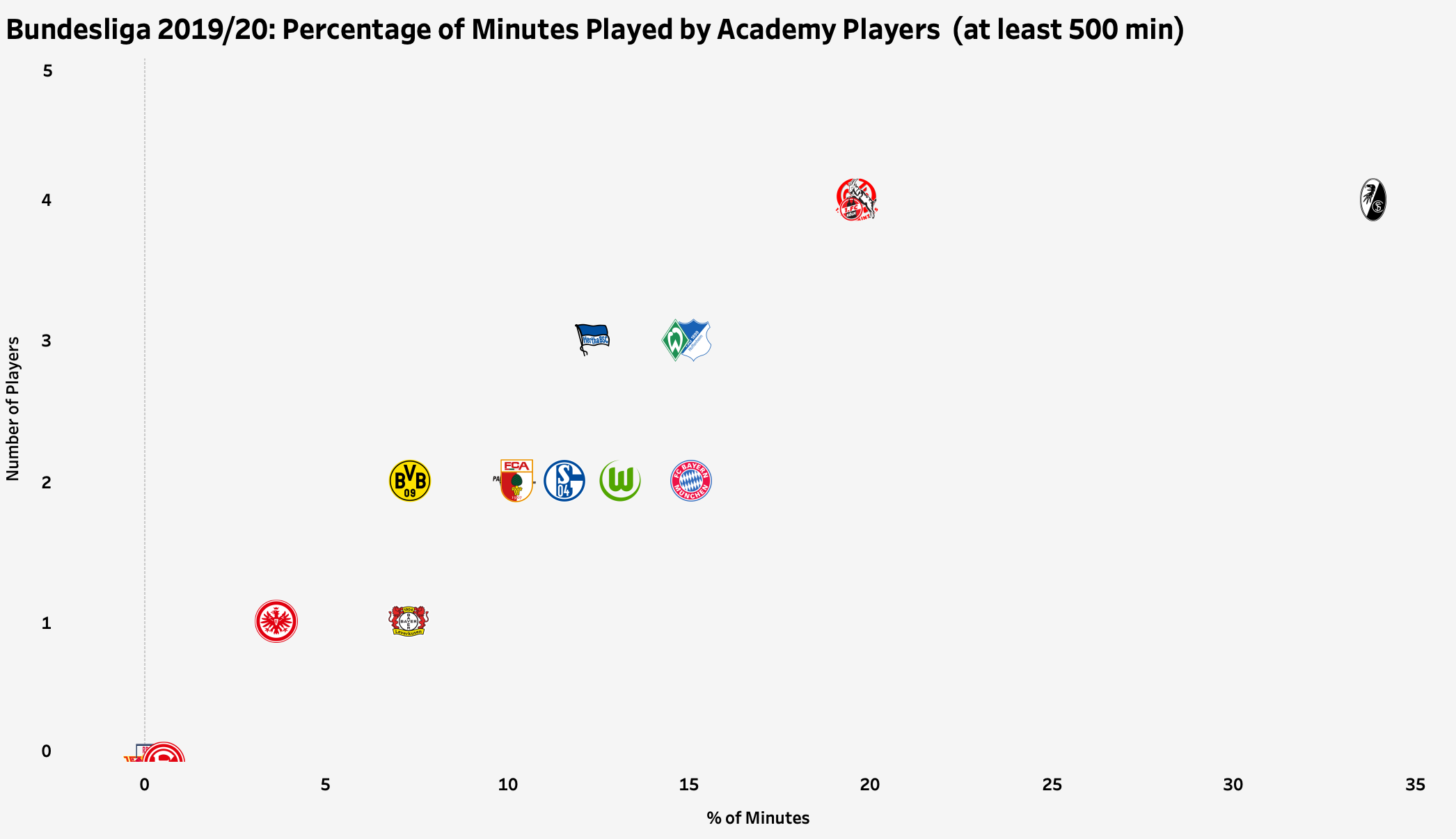 Football clubs usually tend to play their youngster more frequently at the end of a season when most things are already settled. Sometimes players manage to leave a lasting impression, yet, many of them will disappear. Schalke are a good example in this regard. Due to numerous injuries and the fact that their season was basically over at the beginning of June, they started to throw in four of their talents from the Knappenschmiede. While this is certainly a good opportunity to do that, it remains to be seen, who of them will be counted on when the new season starts in September.

Either way, due to the return of some loaned players, most Bundesliga clubs have a good number of academy players in their squad. Without a doubt, many of them will be loaned out again to develop elsewhere. That said, given the current market conditions and the prevailing uncertainty, clubs might pay more attention to their academies and more likely give them a chance to prove themselves at the top level instead of buying expensive new stars from abroad. 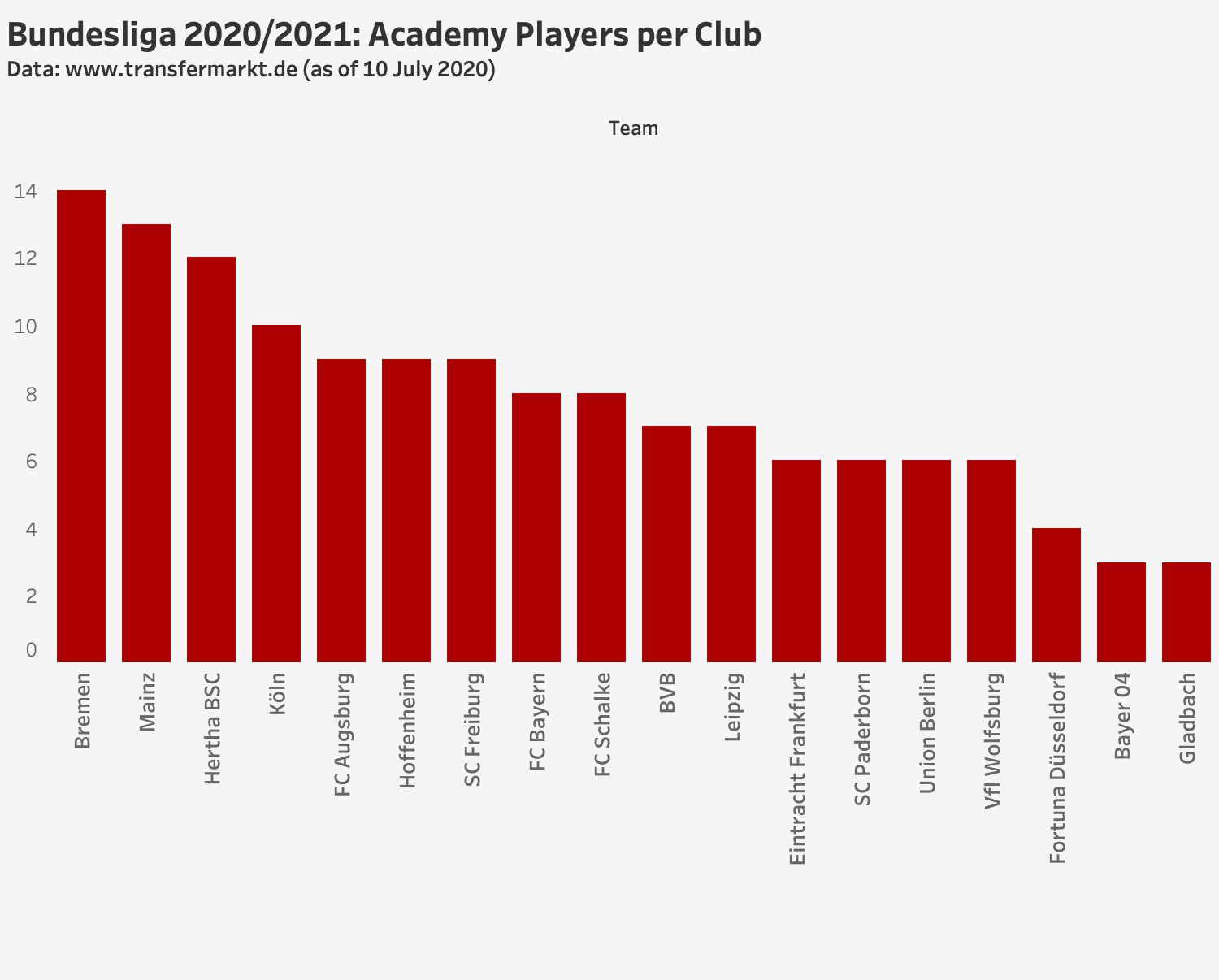 We could see that just looking at the number of players and ignoring the number of minutes played can be misleading. Oftentimes, there are on or two standout players that might skew the results and indicate a wrong picture. In addition, this analysis has shown that many clubs did not integrate a lot of academy players into their first squad last season and that there were not many debutants.

However, this data analysis has tons of limitations and is a very easy way of looking at the use of academy players in the Bundesliga. Most importantly, we just looked at the last season, which does not give us any conclusion about the clubs’ academies in general. Taking a broader perspective and looking at the previous five years might give a clearer picture of how Bundesliga clubs integrated academy players over a longer period of time.