Joshua Zirkzee is a name familiar to most for being the unfortunate Bayern Munich youth academy graduate to come through into the first team in the same era as Robert Lewandowski. Zirkzee, a 20-year-old Dutch centre-forward, has for that very reason left the Bundesliga and joined Anderlecht on loan in the Belgian First Division A. The young striker has had a mixed initial period with the Belgian side, starting some games, coming on as a late substitute in others, and even being hauled off at half-time in one. He has so far played in seven games for Anderlecht, with three goalless appearances in the Uefa Conference League qualifiers, however, he has notched three times and grabbed one assist already in his four league appearances. This scout report and tactical analysis will provide an analysis of Zirkzee’s performances thus far, looking at some of his key tactics as a centre-forward.

Zirkzee varies his positioning but generally when his team has possession he will look to stretch the pitch and play on the last man. He has a big frame, standing at 1.93m, and as such can be used as a target to play into, with attackers making runs in behind either side of him. He is physically strong but at 20 years of age is still filling out, and is still relatively lanky. Despite his height, he doesn’t excel aerially in build-up play and has won just 33.3% of his aerial duels thus far this season for Anderlecht. However, he is highly competent at making late runs towards the ball to receive possession, drawing a centre-back with him, and creating space in the backline as a result. His first touch is pretty consistent and he shows a good understanding of how to use his frame to protect the ball when in possession.

Zirkzee will often look to initially start in an offside trap. He likes to make late runs into an onside position where he can use the lack of marking to give him some initial space to get on the ball. 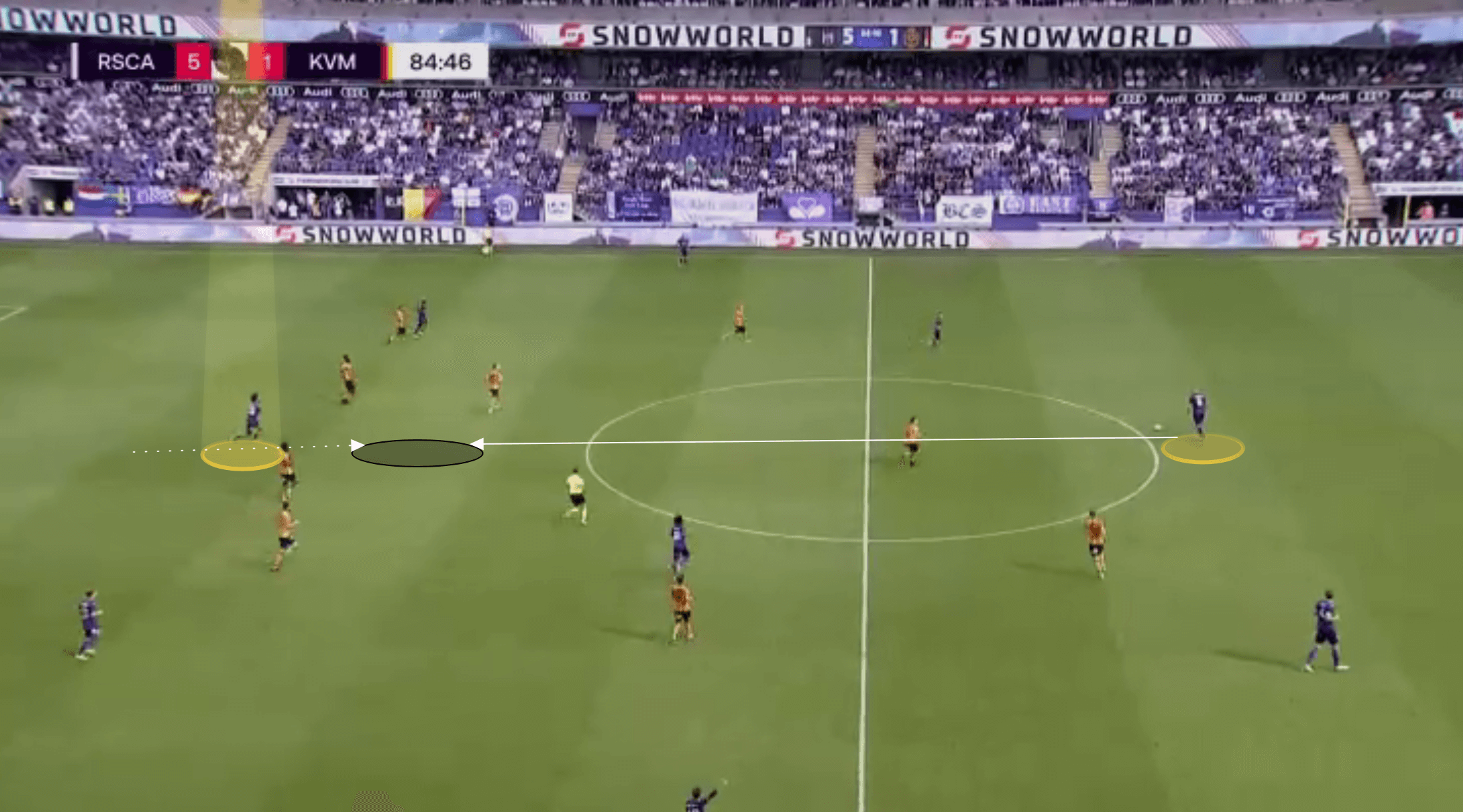 Zirkzee has ability as a dribbler, completing 41.2% of his 3.97 dribbles per 90 this season. He is surprisingly sharp on the turn for a man of his size and has a decent change of pace to allow him to accelerate away from his marker.

We can see this in the next image, which follows instantly on from the previous one. Zirkzee quickly shifts the ball to one side and knows there will be space for the pass in behind, having just vacated that central area by dropping deep himself. He is able to thread the ball in behind to his onrushing teammate. This is a simple, but highly effective routine that Zirkzee will use to advance possession. 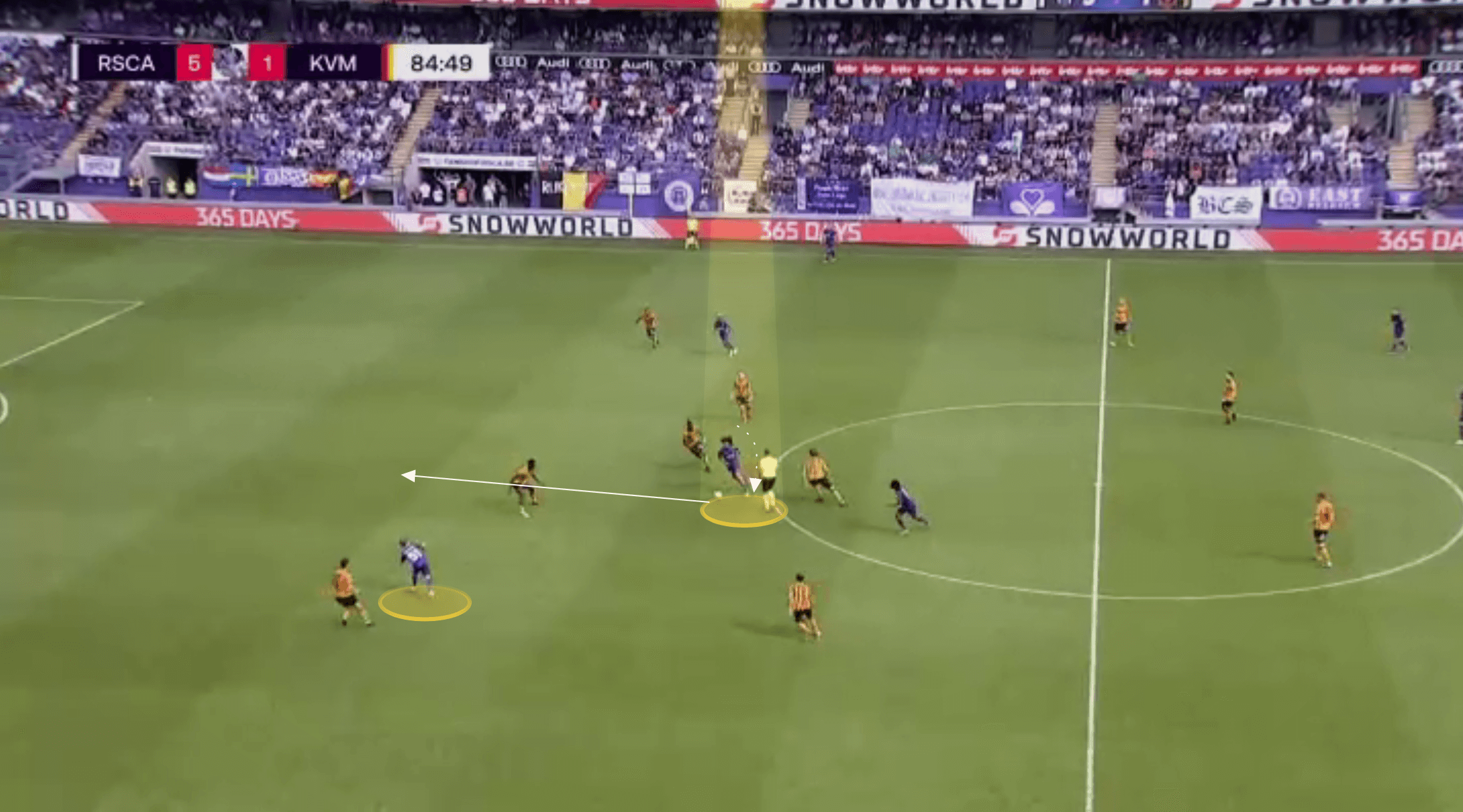 Zirkzee is at his best with his back to goal, and he consistently shows excellent awareness of players around him and space that he can create with movements towards the ball. Another example of this can be seen in the following set of images. He initially starts high and makes a late movement into the 10 space. 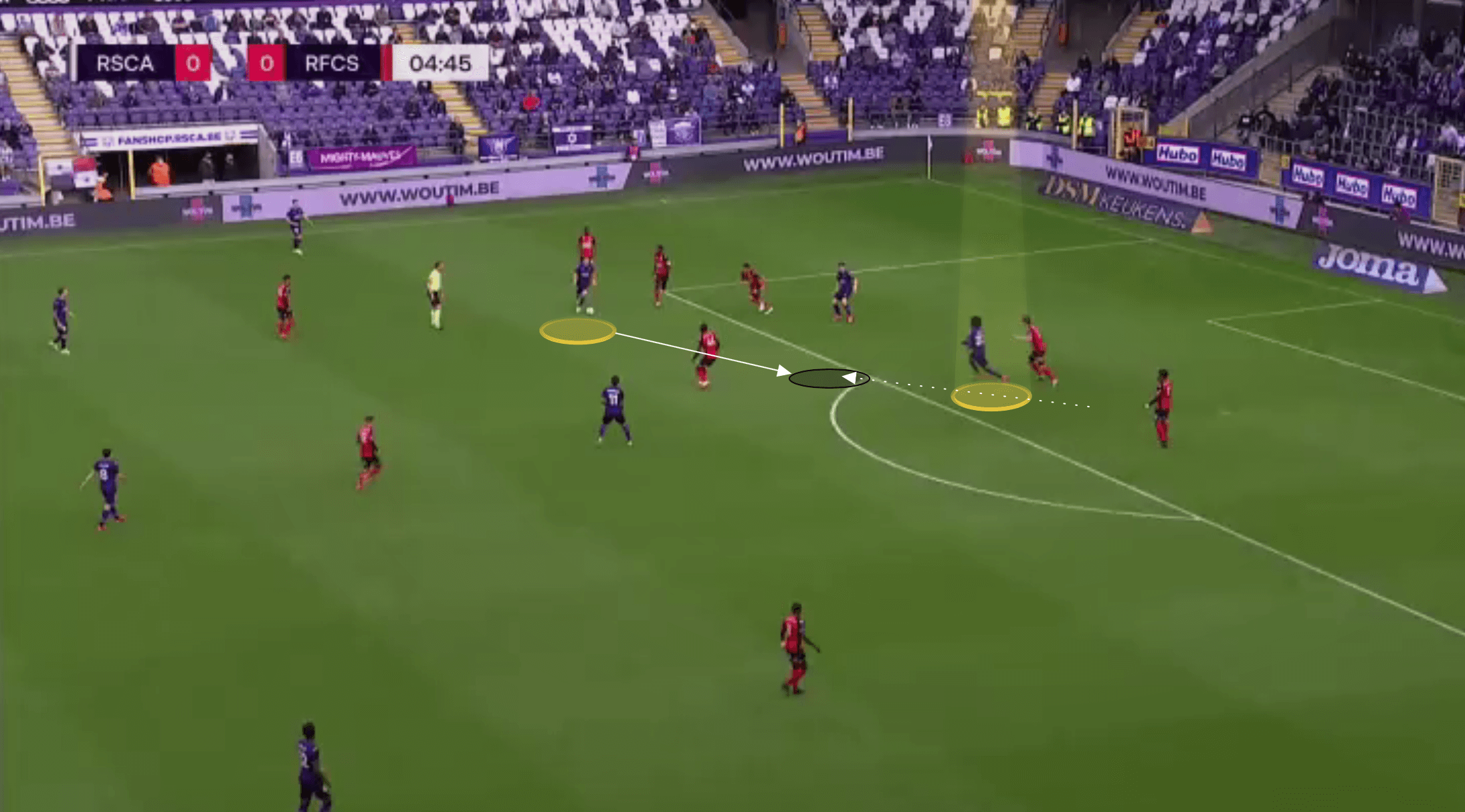 Upon receiving possession he is then able to make an adjustment to play in behind with a backheel beyond the centre-back for the onrushing midfielder. 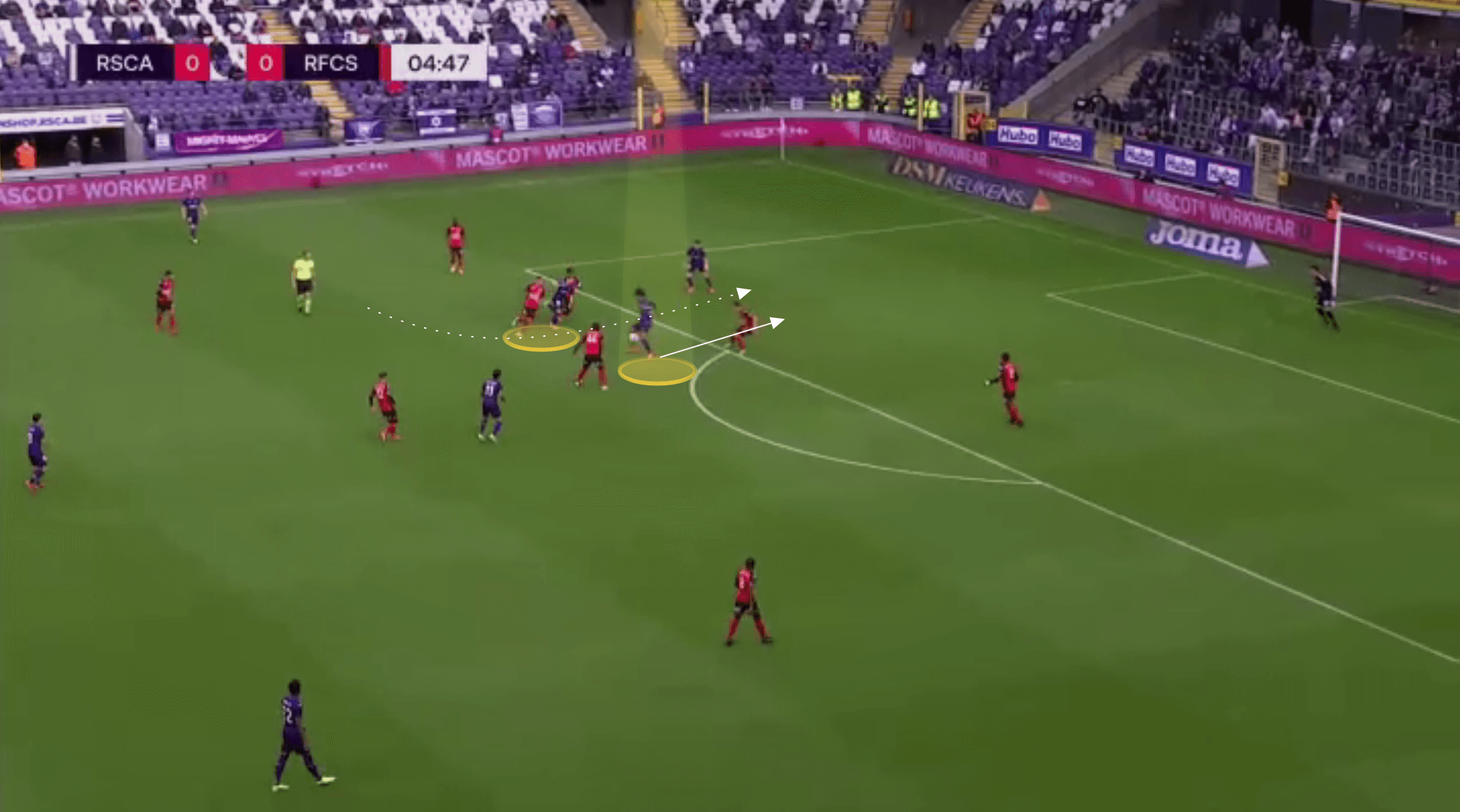 To be as effective as he is with this, Zirkzee initially needs space either side of him, where he can work across the pitch and make these movements towards the ball without teammates getting in the way. But equally, he needs attacking midfielders or inverted wingers to be making late runs in behind either side of him.

Zirkzee can hold off a defender perfectly well and can use his frame to back into them as a pass is played in. Whilst he has a knack for a creative or innovative pass, he doesn’t always look to do this, instead keeping it for moments where perhaps the pass into him isn’t exactly what he would want, or his first touch gets away from him. Otherwise, he keeps things simple, and pass patterns like the one seen below are a common occurrence. 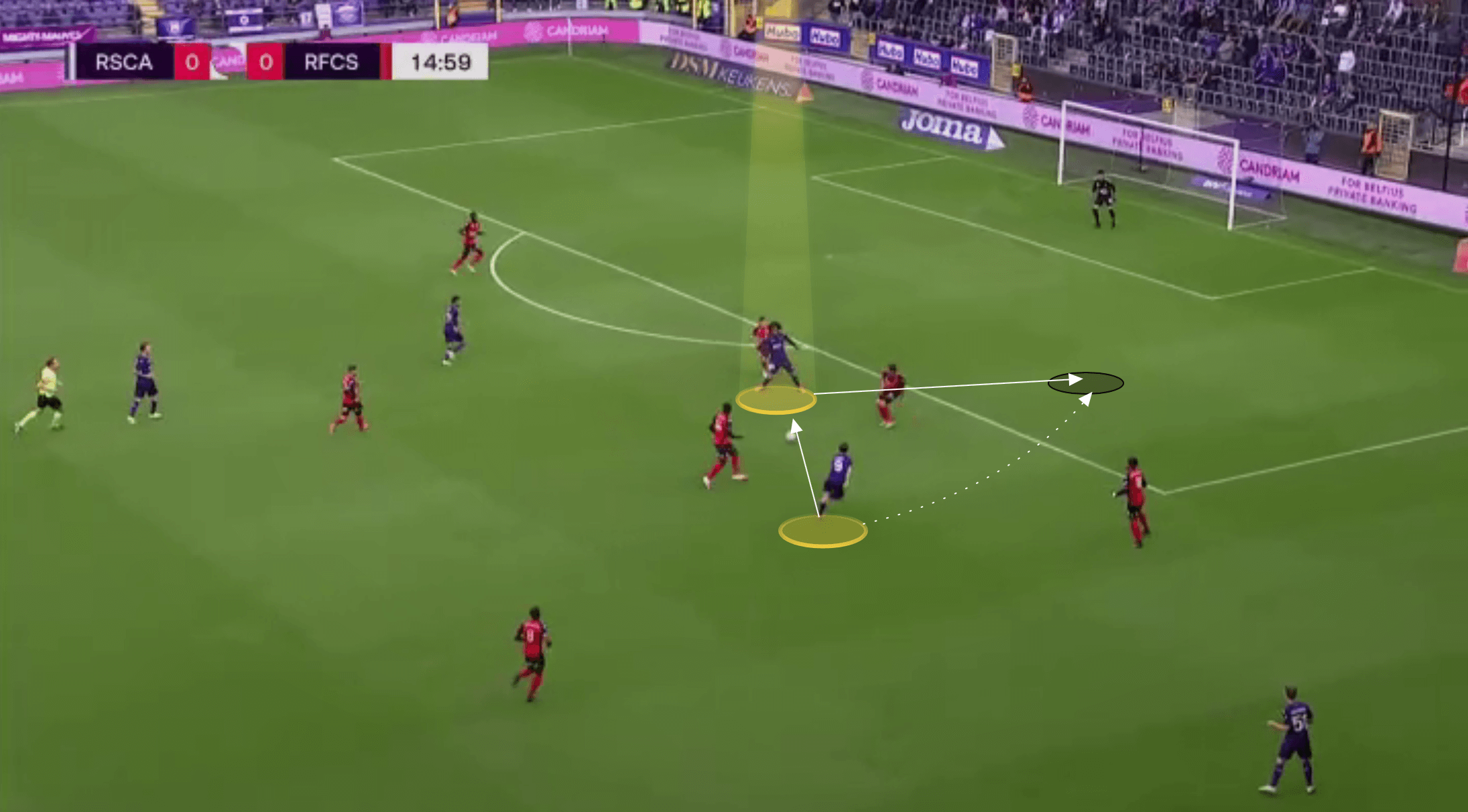 Movement and decision-making in the final third

Zirkzee shows intelligent movement in the final third. When preparing to attack a ball that is out wide, Zirkzee will initially lead one way before changing direction at the last moment and reaping the benefit of the space he has created for himself. 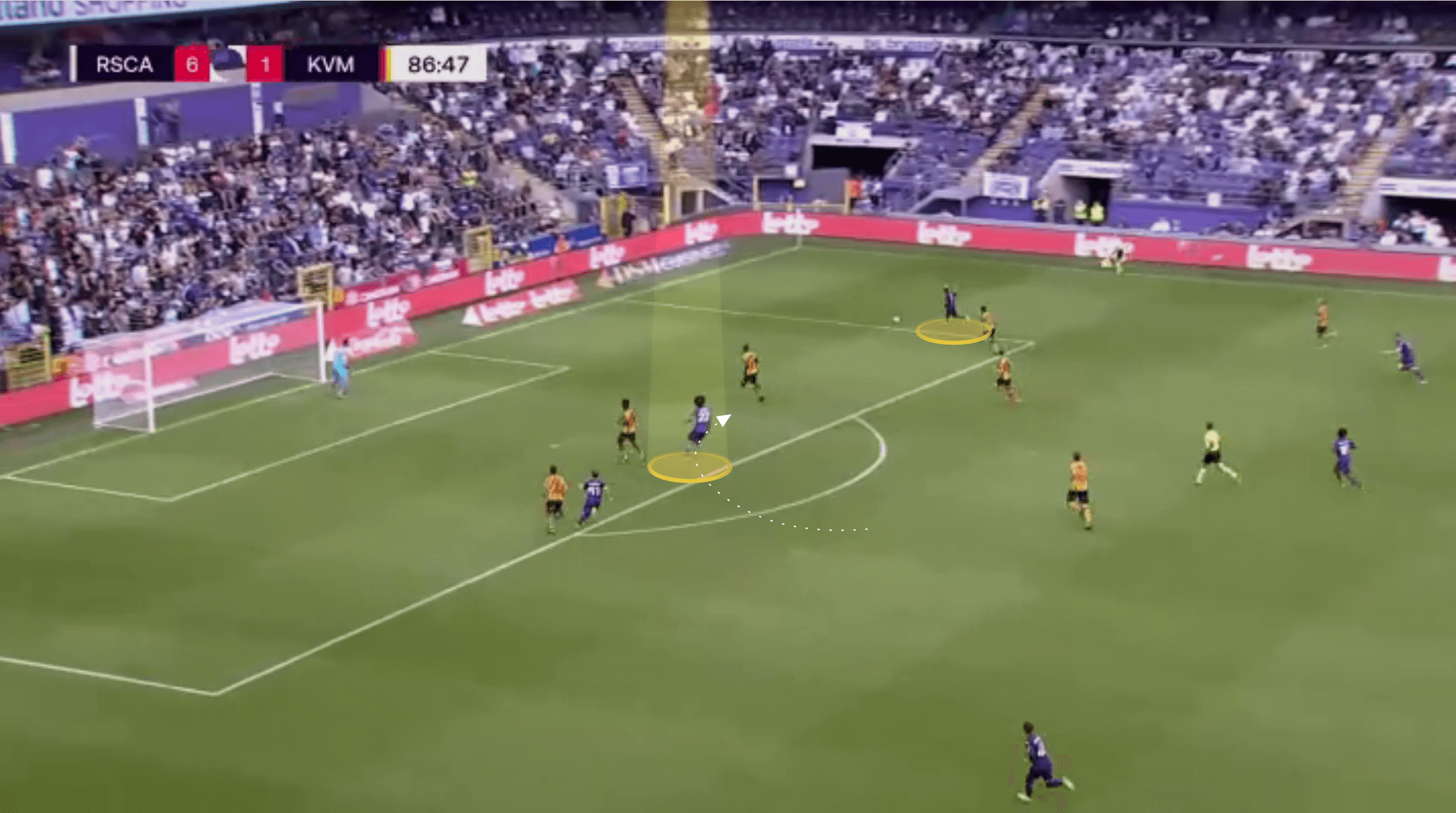 This is particularly effective when the ball is taken to the byline and pulled back. If both centre-backs drop in line with the ball and the defensive midfielder doesn’t drop quick enough to cover the space in the “second six-yard box”, it creates an easy high percentage goal-scoring chance like the one we can see below. 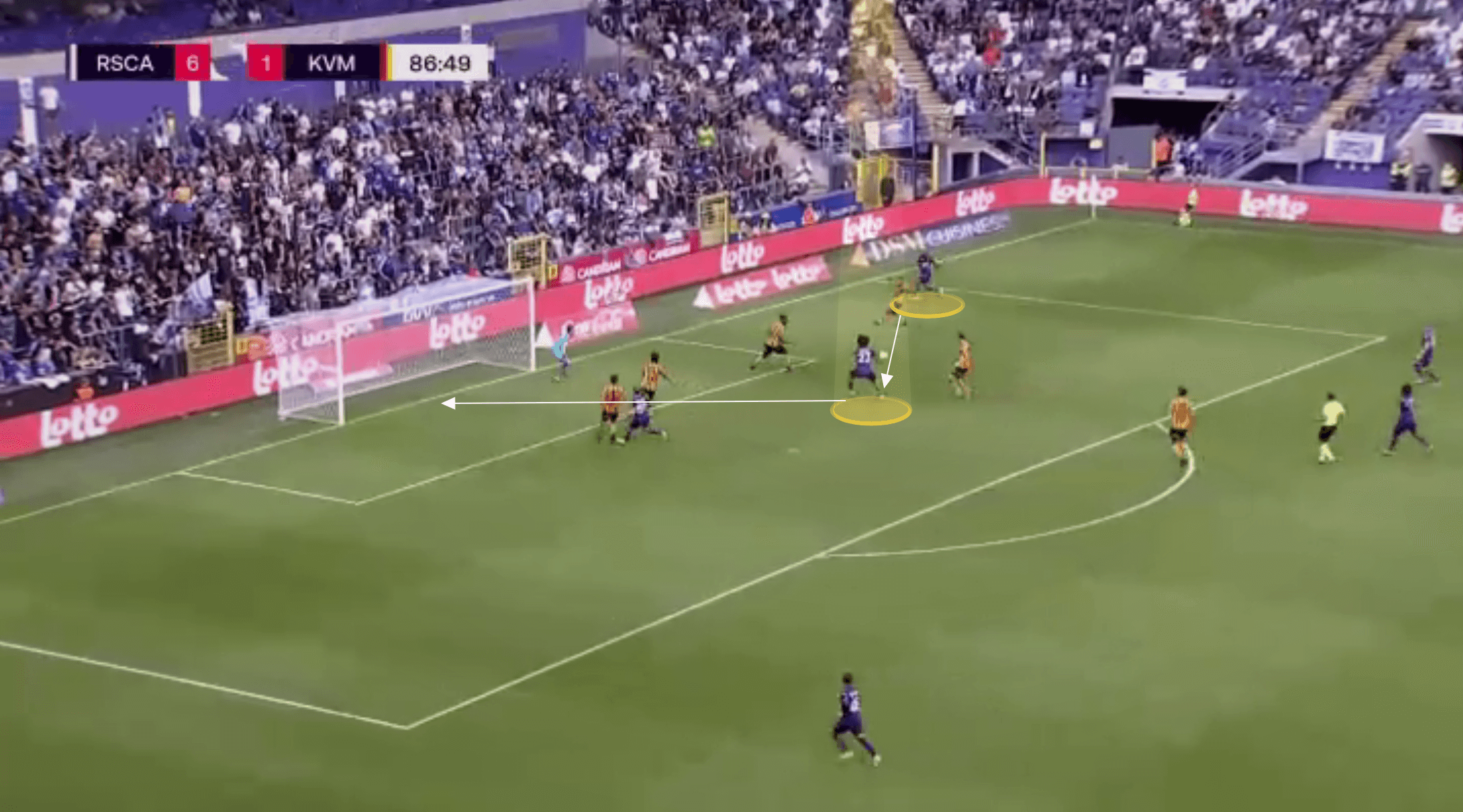 Whilst Zirkzee will start in an offside position before making a run to receive the ball, as we saw earlier, he will also remain in this position to evade close marking until the last possible moment. With the ball worked wide in the image shown below, Zirkzee is content to stay in this position as the opposition backline shifts across the pitch. We can see how the three nearest defenders to Zirkzee all have their eye on the ball. 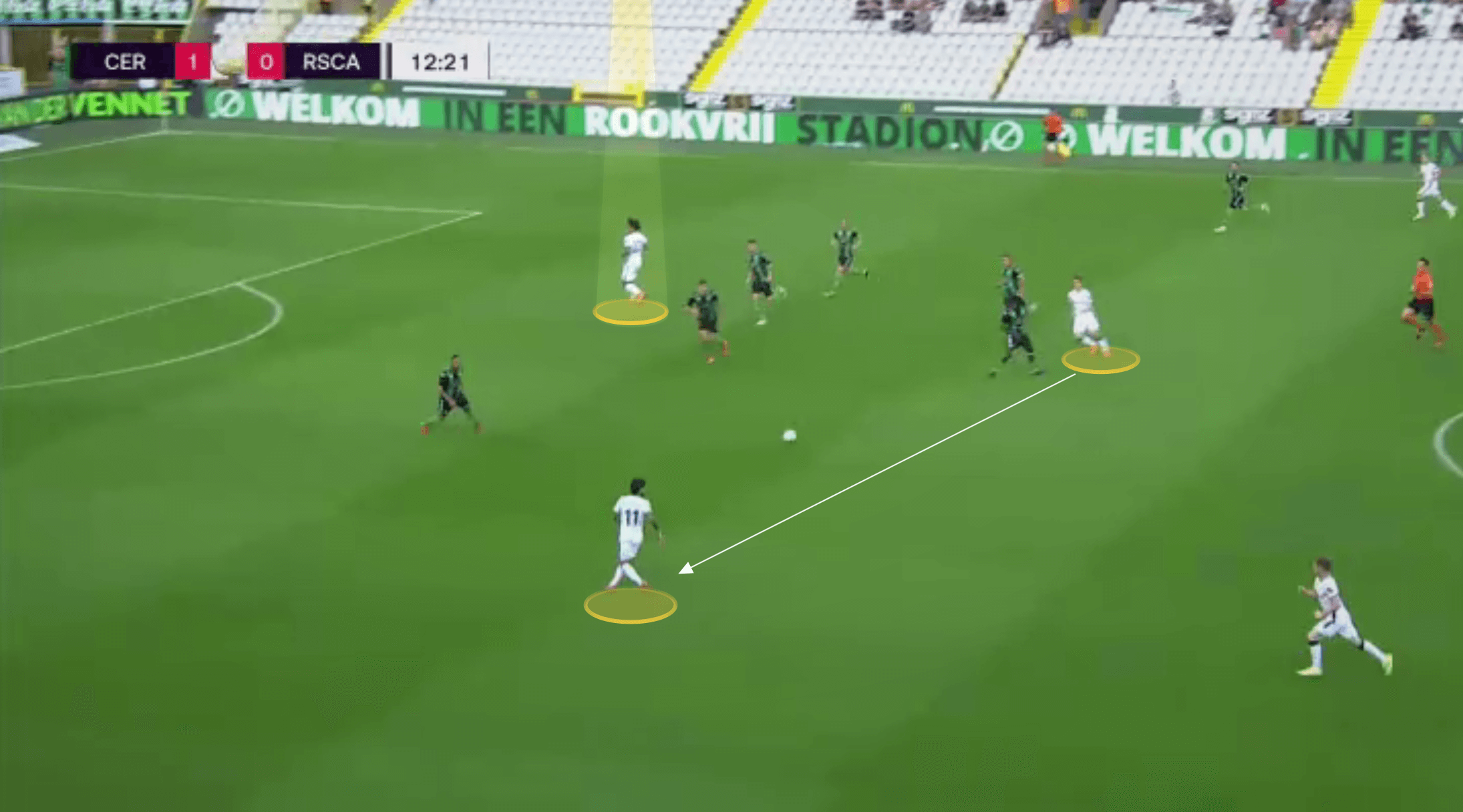 Even as the ball approaches the edge of the box, Zirkzee is still content to remain minimally offside, lingering towards the back of the defence. 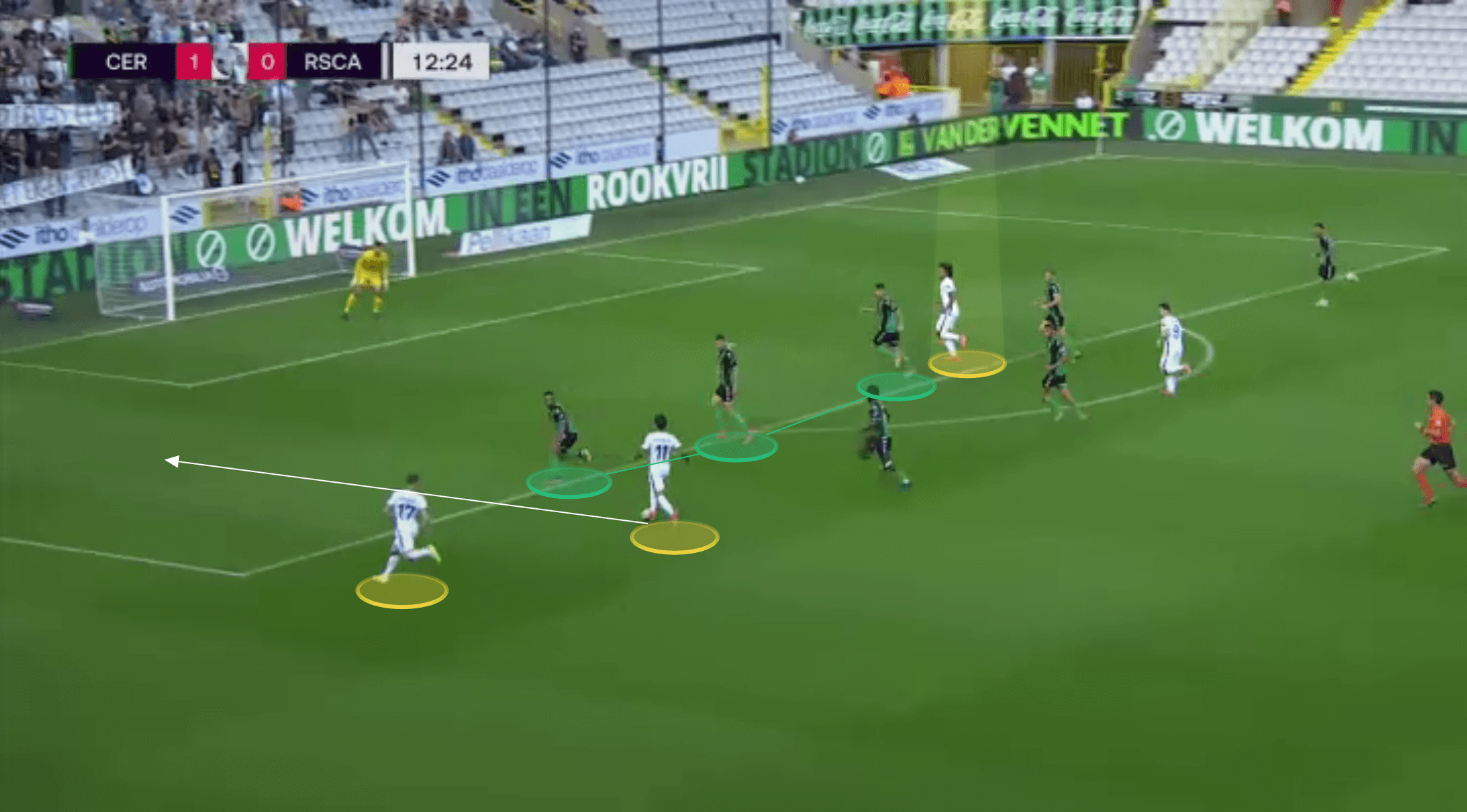 Finally, as the ball makes its way close to the byline, Zrikzee will allow the defenders to drop beyond him, playing him onside. From this position he again uses simple misdirection, initially attaching himself to the far-side centre-back before darting towards the back post for the easy tap-in. 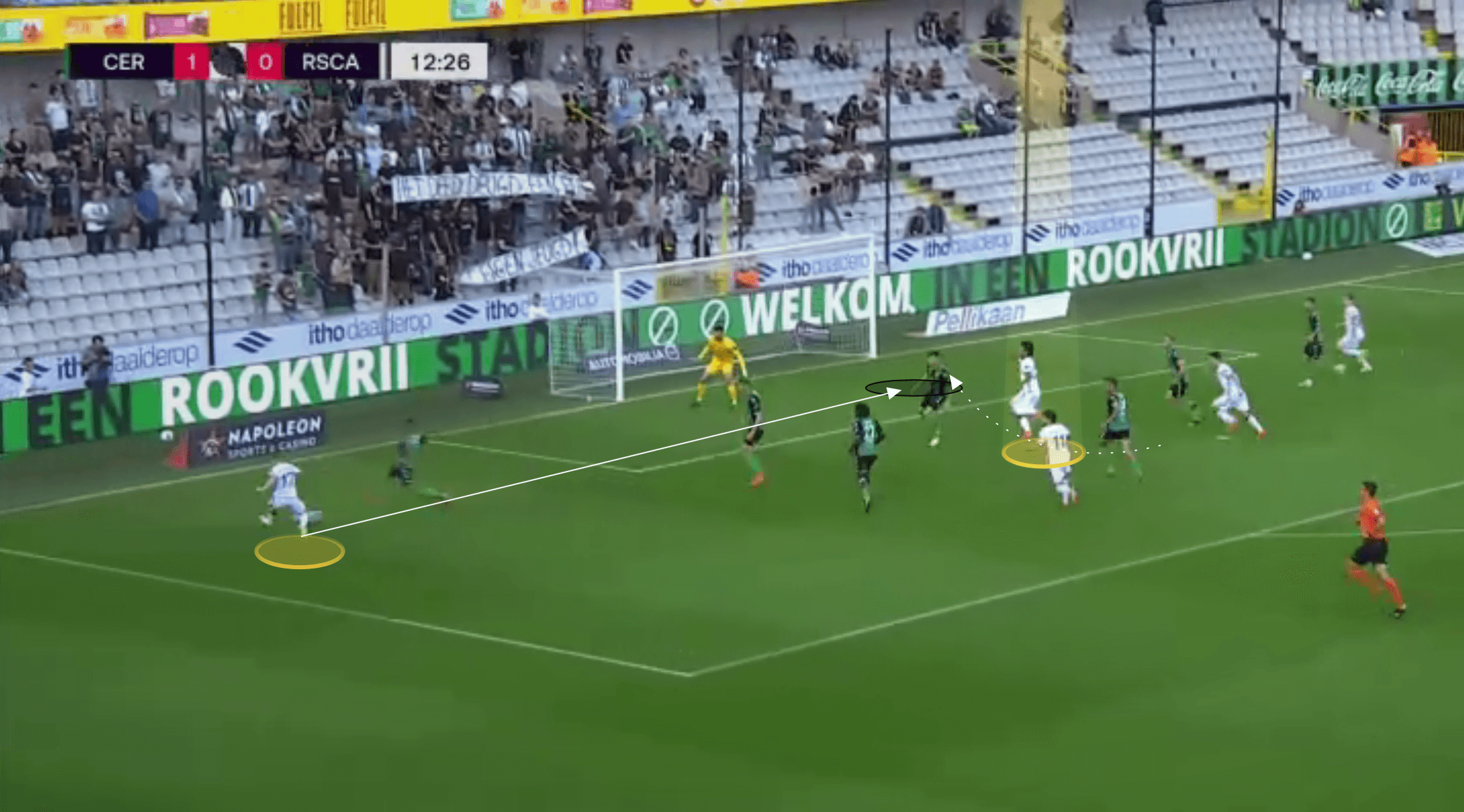 He is still developing with some of his decisions in crucial moments, specifically as a creator. Zirkzee can look to be too clever at times with some of his through pass attempts, and has a penchant for a no-look, “flick” pass. He can look to hit the pass too early at times too, not allowing play to develop a little more. An example of this can be seen in the image below, where he beats the defender out wide on the quick break, and immediately looks to hit the ball across goal. In this example, this was a difficult pass to pull off and the supporting attacker couldn’t make the cross. However, should Zirkzee have looked to cut in front of the pursuing defender and take the ball to the byline, the forward would have had more time to make his run. 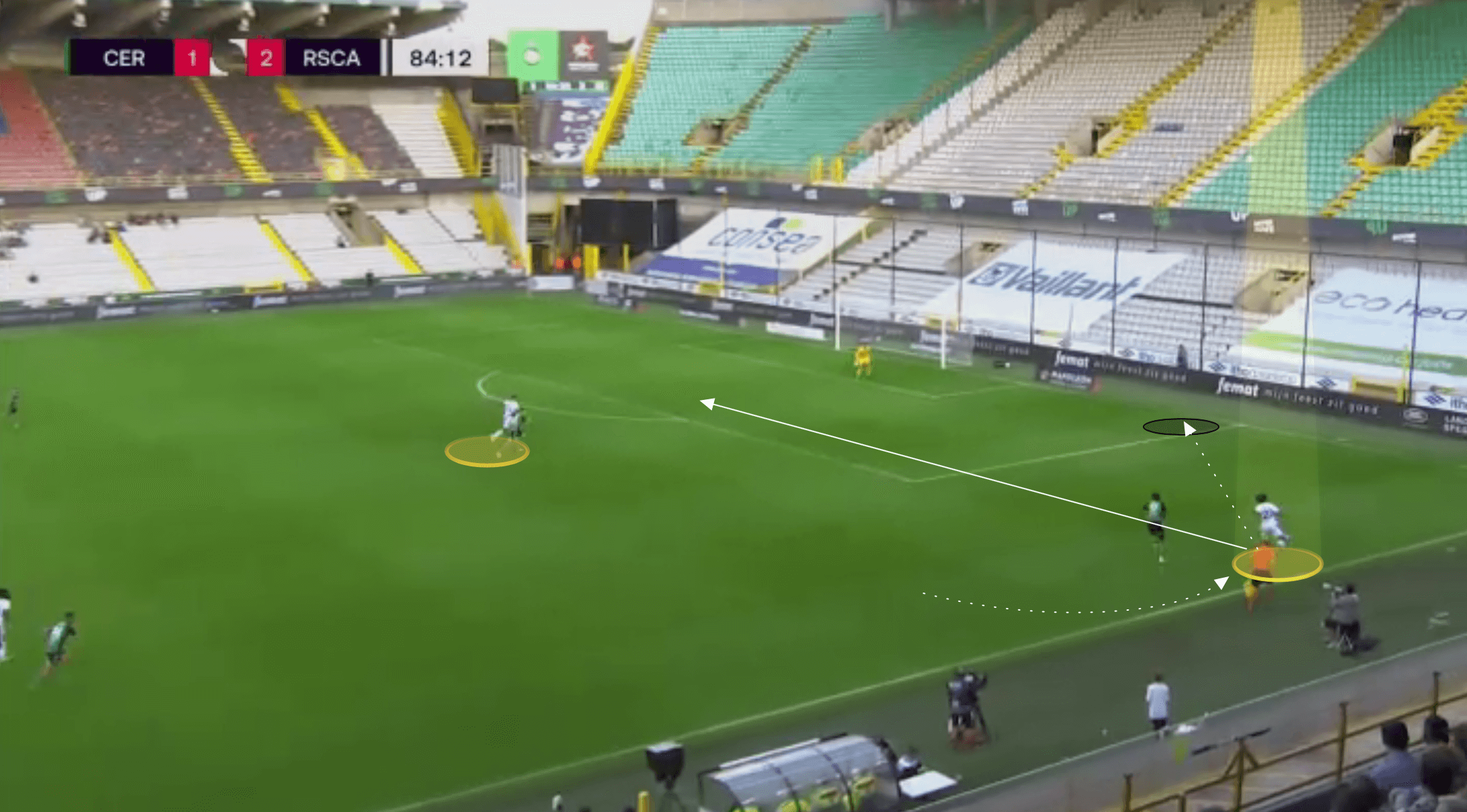 Zirkzee has good positional sense in the defensive phase and will work diligently to lead the press and shift across the pitch to cut off forward passing lines. However, he is rarely aggressive with his pressing, preferring to save energy and maintain compactness with his midfield. Yet he consistently shows talent when the ball has been played beyond him. Zirkzee will drop deep in the defensive phase and demonstrates good timing when he looks to make tackles or interceptions. As such, he has a knack for regaining possession in favourable positions where he can start counter-attacks from.

He can do this by simply dropping back and stepping in to make a challenge from the blindside. 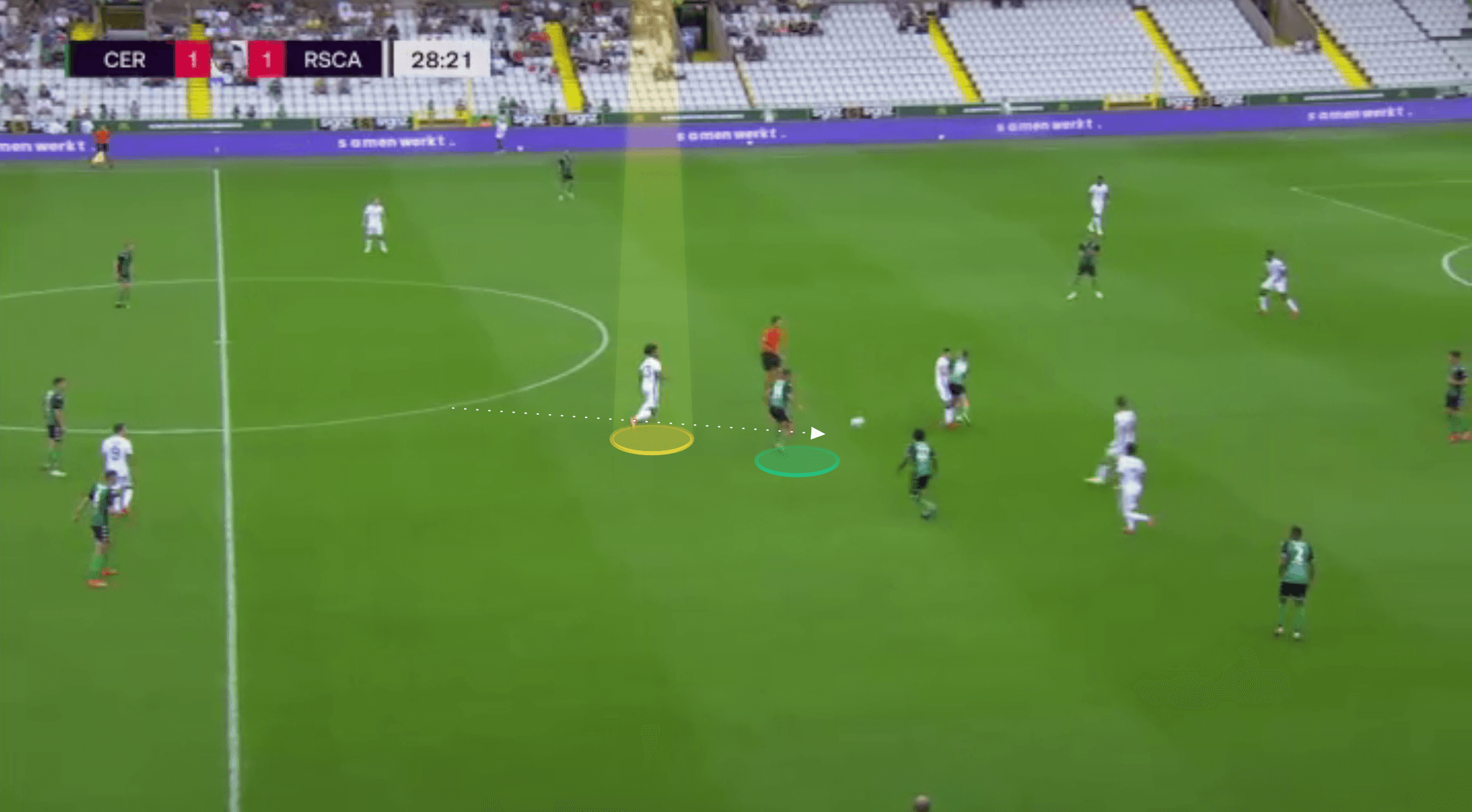 Upon winning possession, Zirkzee is confident driving forward with the ball himself, and as mentioned earlier he is a dribbler of good quality. He will advance possession but doesn’t overrun the dribble, and generally looks to draw a defender out of the backline before releasing the ball to a nearby teammate. 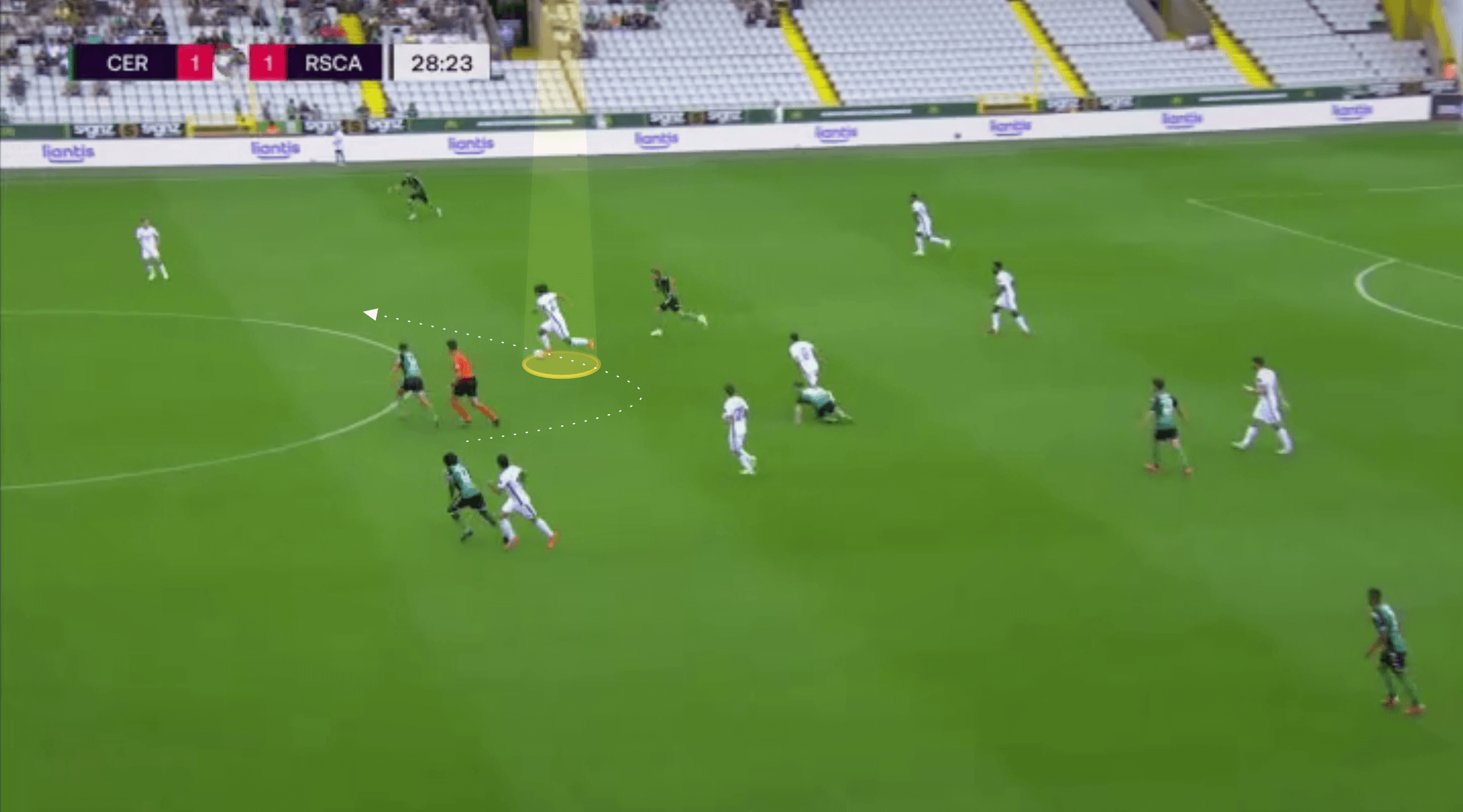 He may initially start on the centre-back but will look for opportunities to step in and win possession, recognising pressing triggers such as a player not scanning or receiving with a slightly closed-off body position, like we can see below. 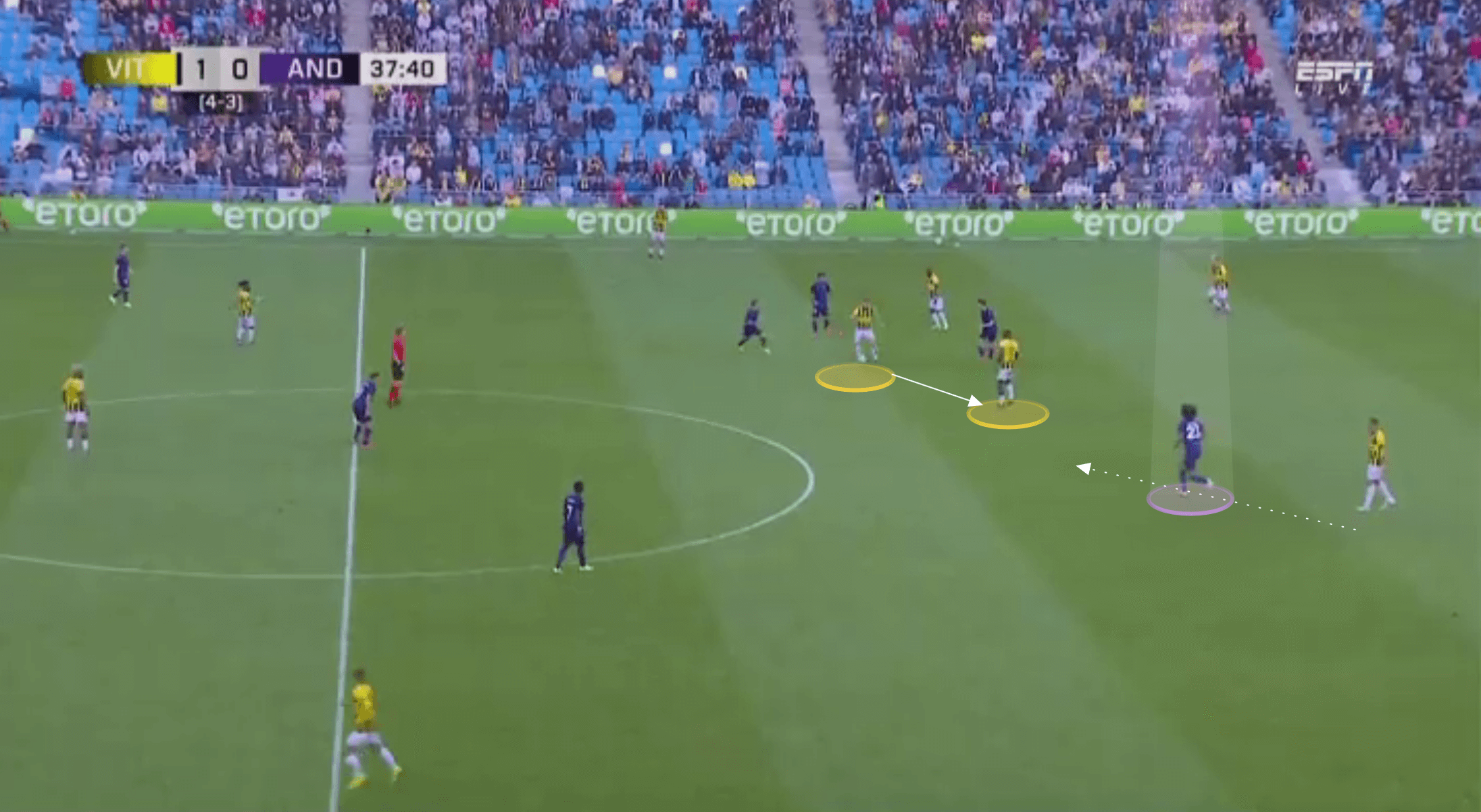 In these moments, Zirkzee will challenge with force but he is fair with his tackles and doesn’t let opponents out of a tight spot with a careless foul. Anderlecht do a good job of maintaining a compact central channel in the defensive phase, and a challenge like the one below can get the ball away from the ball-carrier enough whereby one of Zirkzee’s teammates can easily sweep up possession and begin the counter. 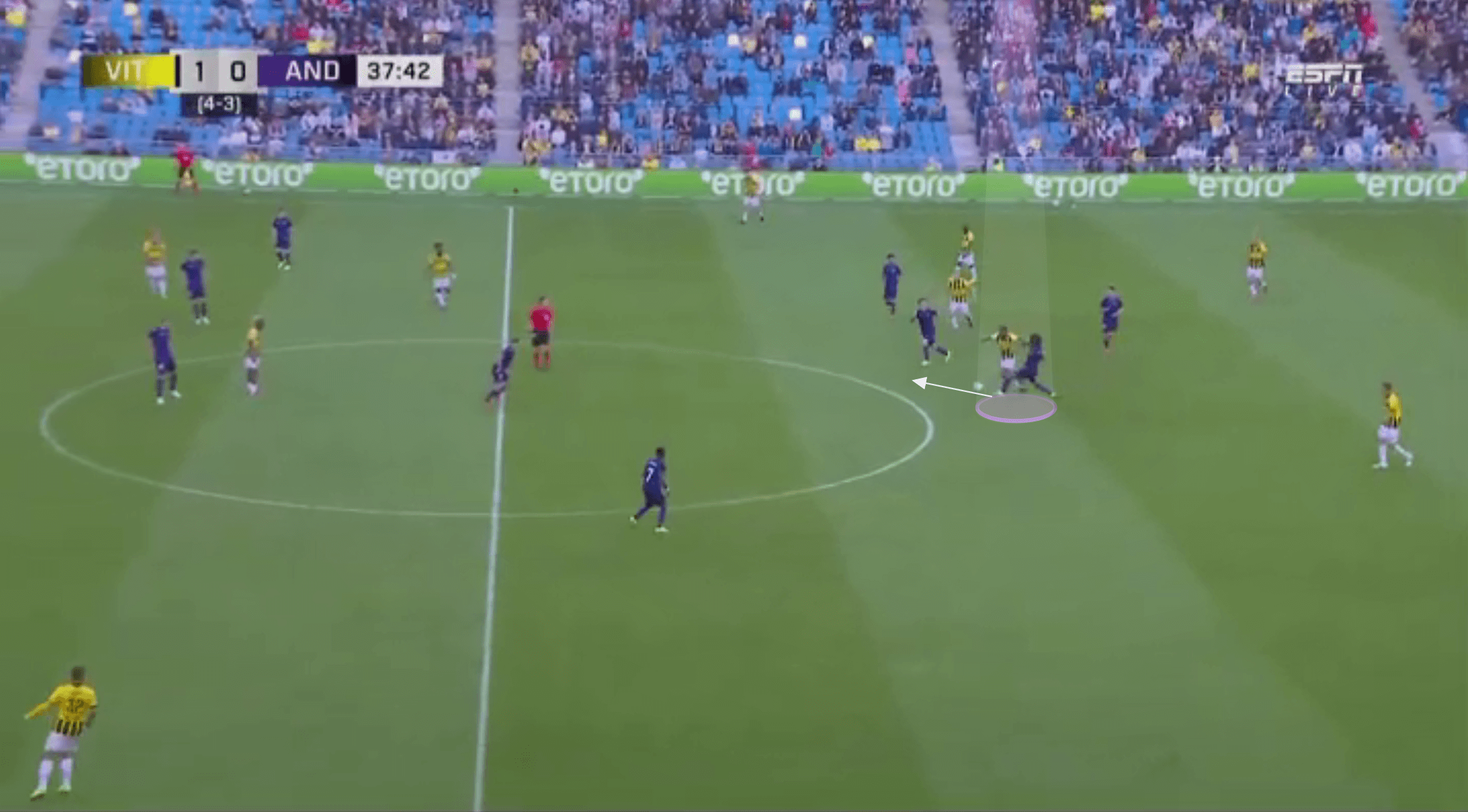 Zirkzee’s positioning close to his midfield also allows him to be an immediate option upon turnover of possession. The Dutch forward is often an easy forward pass option for his teammates on attacking transition. He will frequently scan even when the opposition have possession, and when the turnover occurs, he can quickly open his body up and drive forward on the ball to start the counter. 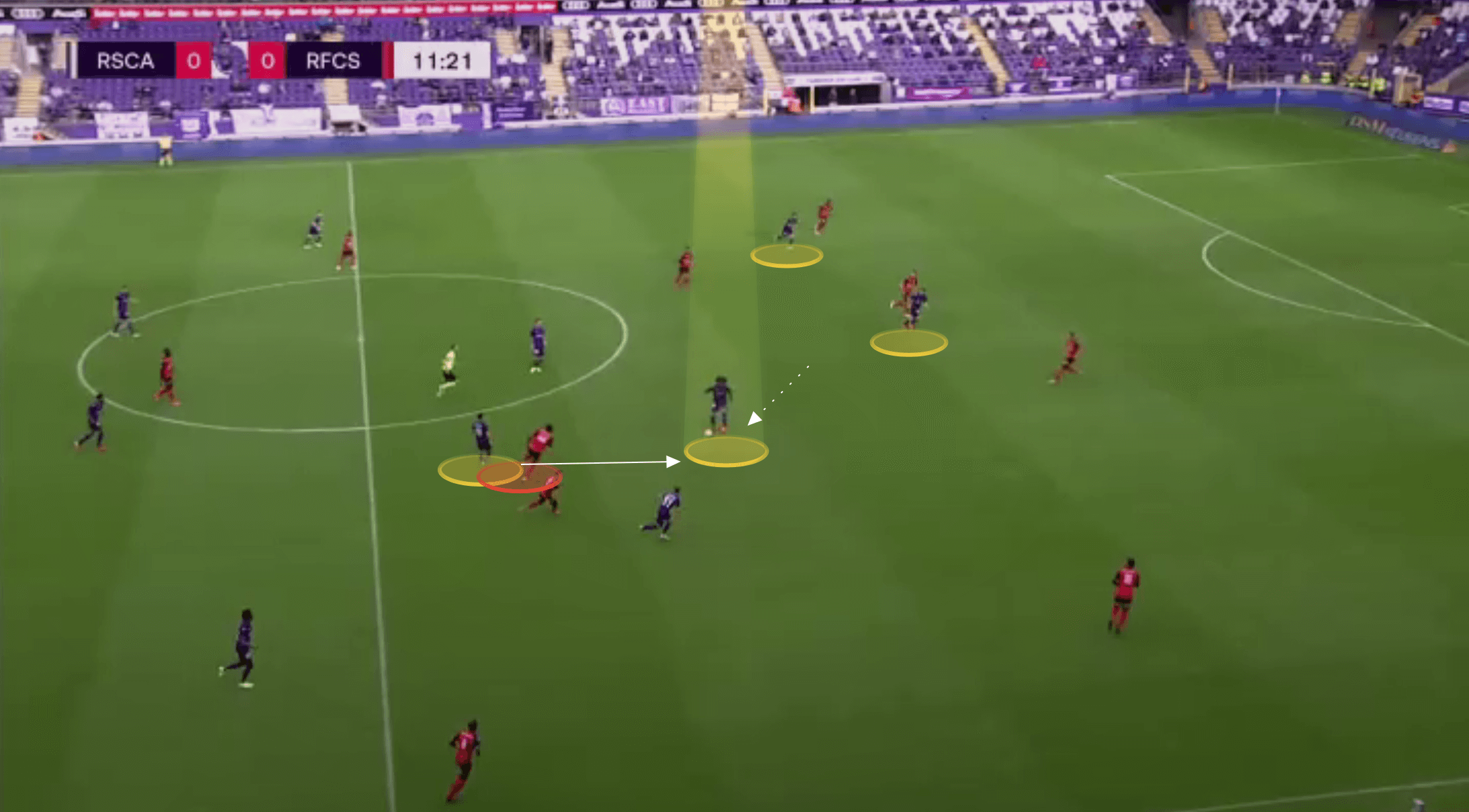 Some forwards might be sluggish to push forward given this deeper positioning in the defensive phase, but Zirkzee has an excellent reaction to transition. If he isn’t able to make a challenge or get in possession instantly on the turnover, he will sprint forward at a good pace and offer an option through the centre of the pitch should his teammates see this pass option. However, at the very least he immediately stretches the opposition and ensures the opposition centre-backs can’t step forward to engage the ball-carrier.

It is early days in this loan move, however, Zirkzee has begun to replicate some of the promise he showed in his previous time with Bayern. Whilst the acknowledgement of his talent has never been in doubt, this move to Anderlecht is a smart one for all involved. It allows Zirkzee to develop away from the spotlight and get considerable game time under his belt on a consistent basis. With three goals in his first four league games, he has certainly started well, and he will be one to keep an eye on over the course of this season.