Anja Sønstevold is a 29-year-old Norwegian international who actually plays at Serie A Women’s Internazionale and who has been called-up to represent Norway Women in Euro 2022. Sønstevold started her career at Kolbotn since 2009 before going through a couple of experiences at LSK Kvinner and Fleury from 2015 to 2021. And since 2021, she joined Inter and played almost a full season with them, showing her skills and ensuring that she does well in order to get her participation ticket for the Euro 2022, and that’s exactly what happened.

In this tactical analysis scout report, we will delve deep into analysing the player’s characteristics both from a defensive and an attacking perspective while exploring how she can be impactful in the tactics of Norway in Euro 2022 and at Inter next season.

Sønstevold plays mainly as a right-back and that’s her natural role. But in addition to being an excellent right-back, she can also be used as a right centre-back at times especially when using a back-three formation. In addition to that, Sønstevold was also used as a left-back at times especially at Norway. She is a mainly defensive player who is responsible for marking opposing wingers, covering and helping her teammates inside the box whenever needed and especially during counter-attacks.

Moreover, Sønstevold is important in the build-phase as well as in the final third since she advances regularly to support the attack with crosses and through passes. In the following heatmap, you can see how Sønstevold covers most of the right-wing while balancing her movements between attack and defence while moving towards the middle as well both when helping defenders or when reaching the final third.

During the Euro 2022 however, her principal role would most probably be to secure her flank and make sure not to let players like Manchester City’s Hemp, Austria and Hoffenheim’s Katharina Naschenweng, Northern Ireland’s Lauren Wade or Marissa Callaghan, in addition to the players she could face if the team qualifies to the quarter-finals. In this case, Sønstevold would have to closely mark a German player: either Hoffenheim’s Jule Brand or Bayern Munich’s Klara Bühl, or a Spanish winger who would most likely be Barcelona’s Clàudia Pina or Mariona Caldentey. 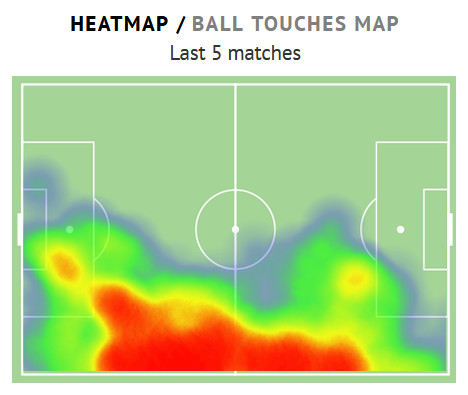 In terms of defending, Sønstevold’s actual statistics are good but they can be improved in the near future if the player focuses more on certain aspects and make use of her cumulative experience. She wins 66,5% defensive duels per match, 55,7% aerial duels. The success rate of her sliding tackles is 56,5% and the number of her interceptions reaches 5,44 per 90 minutes.

In order to achieve these numbers, Sønstevold uses her game intelligence to intercept passes and win in duels, knowing that she doesn’t rely too much on her physical strength. Therefore, she uses her tactical understanding to read games and opponents’ “next moves” before anticipating passes or making an accurate off the ball movement in order to close down an opponent or prevent her from advancing. In the following example, it is clear how she was aware of the direction of the pass even before the receiver knew it, and that’s what enabled her to anticipate her direct opponent’s movement and intercept the pass successfully. 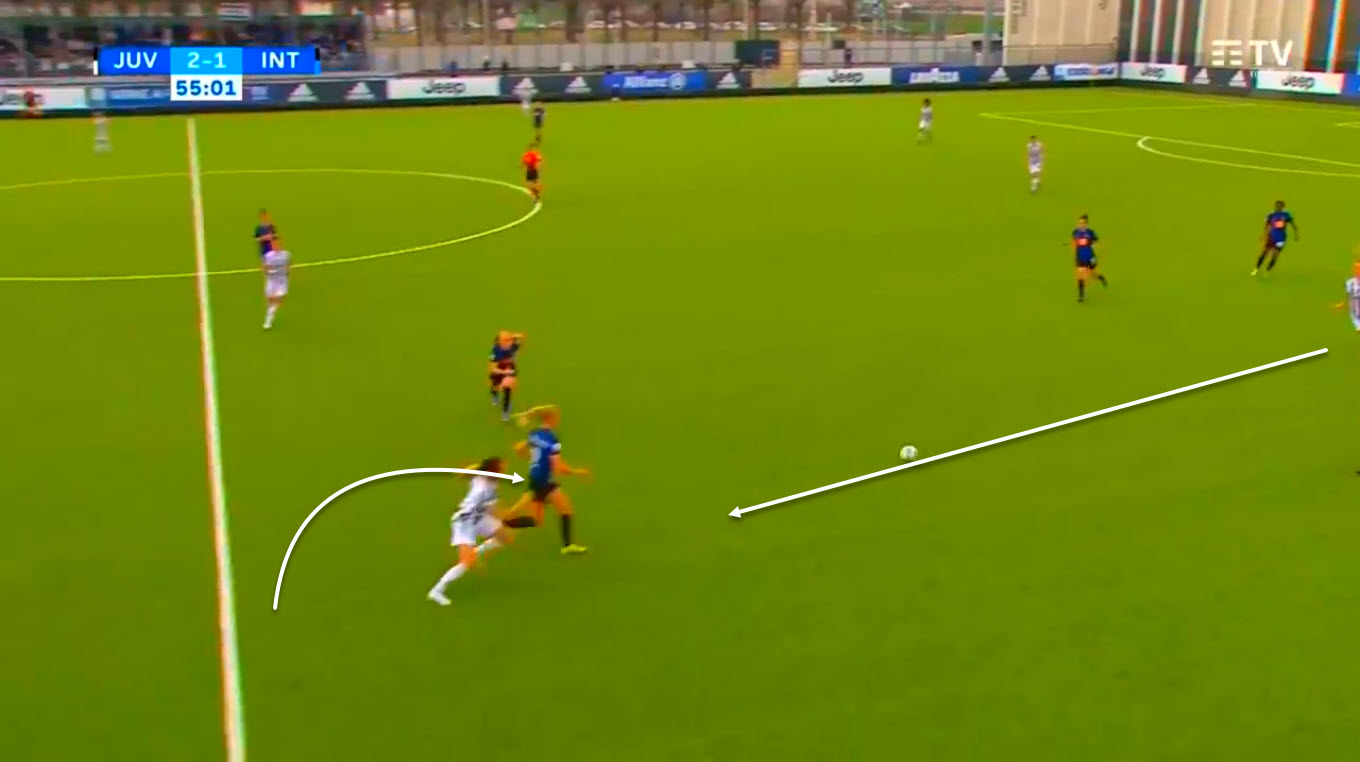 Moreover, she knows exactly when she has to press high on her direct opponents in order to oblige them into committing mistakes, losing the ball or retreating. Identifying where her opponent is in complicated situations helps her to know when she has to disturb her and make sure she doesn’t turn towards the goal or have the possibility to make a forward pass.

Here, you can notice how Sønstevold totally blocked her opponent in her own half and obliged her to settle for a throw-in instead of advancing or switching play to the other wing. Such anticipations, pressing and disturbance of opponents makes Sønstevold’s role even more important in all phases and if she succeeds in being as aggressive and intelligent as needed during the Euro 2022, then Norway will be safe on that flank. 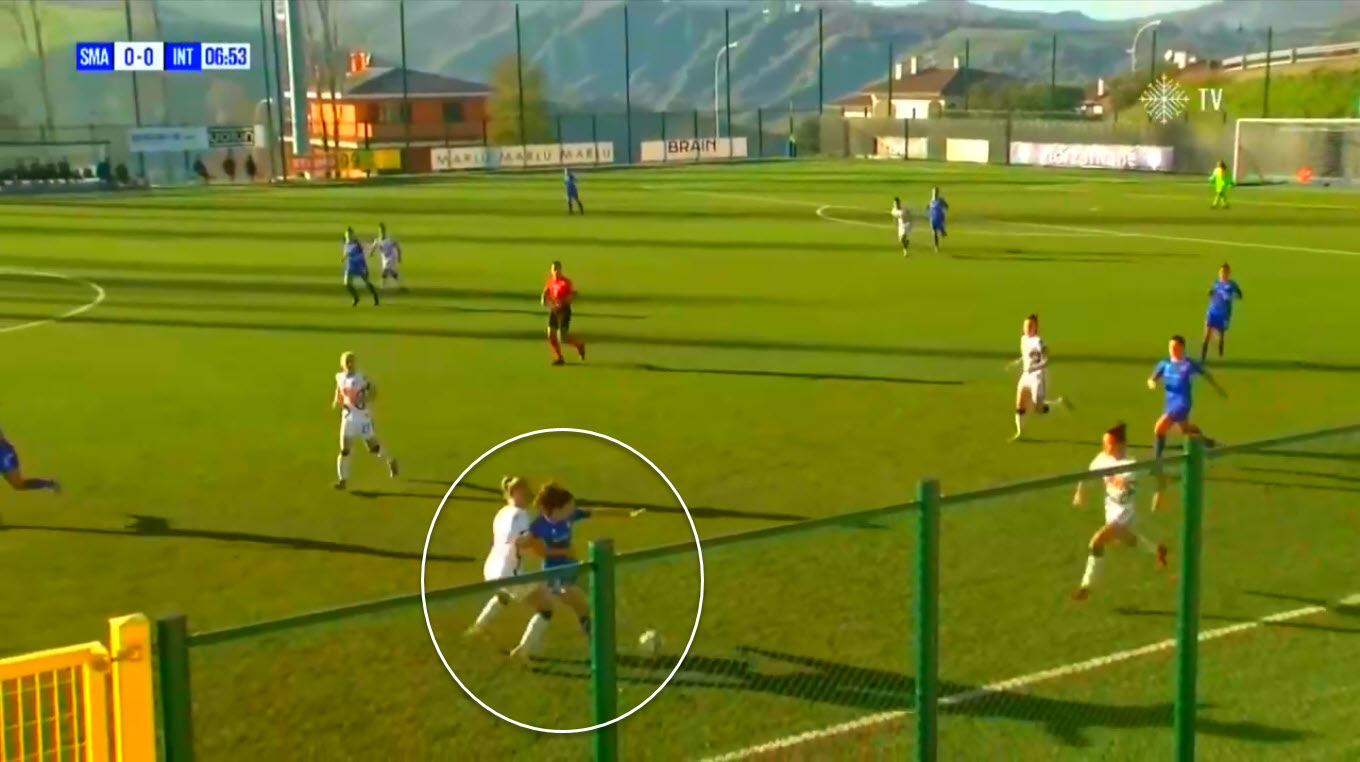 As mentioned above, Sønstevold has a success rate of 56,5% when it comes to tackles. She makes 0,3 tackles per game which is a low number. However, whenever she decides to go for a sliding tackle, she ensures that she succeeds in touching the ball and that’s very important. Sønstevold usually prefers not to resort to tackling since she deals with the situations she encounters with intelligence and footballing wisdom rather than aggressivity.

Nevertheless, certain situations oblige defenders to make sliding tackles and Sønstevold often executes them with elegance and accuracy. In the next picture, she was marking her opponent inside the box while another opponent was crossing the ball towards that player. Sønstevold therefore had to anticipate the pass and make a sliding tackle to clear the ball away while making sure that the opponent doesn’t touch it, which was a risky situation and a difficult action to execute, knowing that touching the player could result in a penalty. Sønstevold made the sliding tackle with success and saved her team from a clear goalscoring opportunity without harming her direct opponent.

It is true that the picture doesn’t show Sønstevold’s body, and that’s because she was just behind the striker who was trying to get the ball, only Sønstevold’s feet are apparent in the picture. 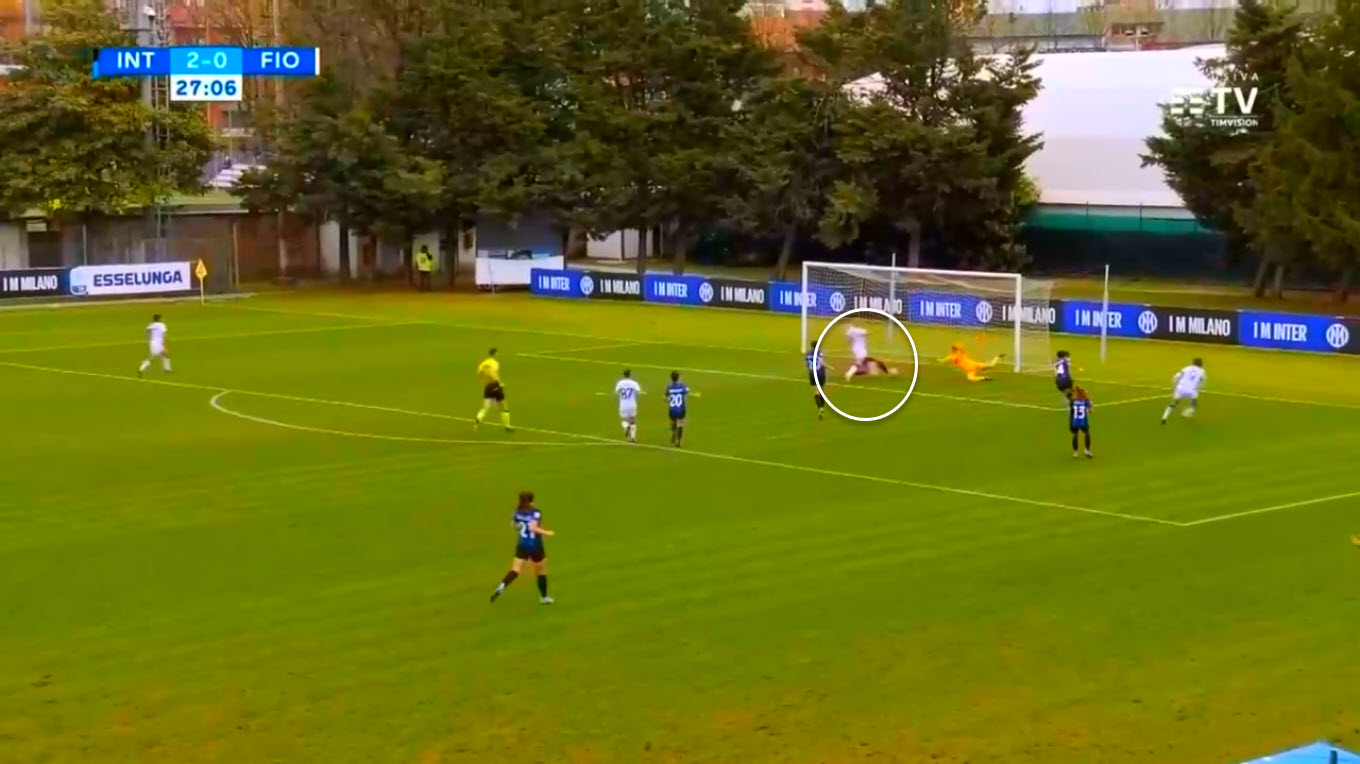 Sønstevold excels at “standing tackles”. In other words, she usually intercepts the ball while standing but by choosing the adequate timing for her interventions. Her timing choices represent the key reason for her ability to usually intercept the ball without resorting to sliding tackles. In addition, the Norwegian player often helps in making clearances inside the box and she has already saved her team several times from goalscoring chances.

When it comes to playmaking, Sønstevold has a passing accuracy that equals 79,8% with a rate of 68,5% in terms of accurate passes to the final third. This means that Sønstevold is reliable player in terms of passing and that she is a good passer too and not a passive one. Her good vision and quick decision-making enables her to provide through passes regularly towards the final third and advance to help her attacking teammates and provide a passing option on the right-wing. Therefore, she is not a right-back who passes passively without having the needed determination to support in attack.

She rather provides key passes and often contributes with assists too. In the following goal action against Fiorentina, Sønstevold was about to receive a pass when she was looking at the box and identifying the movements of her teammates to see who is being marked and who is escaping from marking. When the ball got closer to her, she made her decision and crossed the ball with a first-time touch towards the player who freed herself from marking and executed a volley, scoring a beautiful goal created thanks to Sønstevold’s excellent and accurate cross. 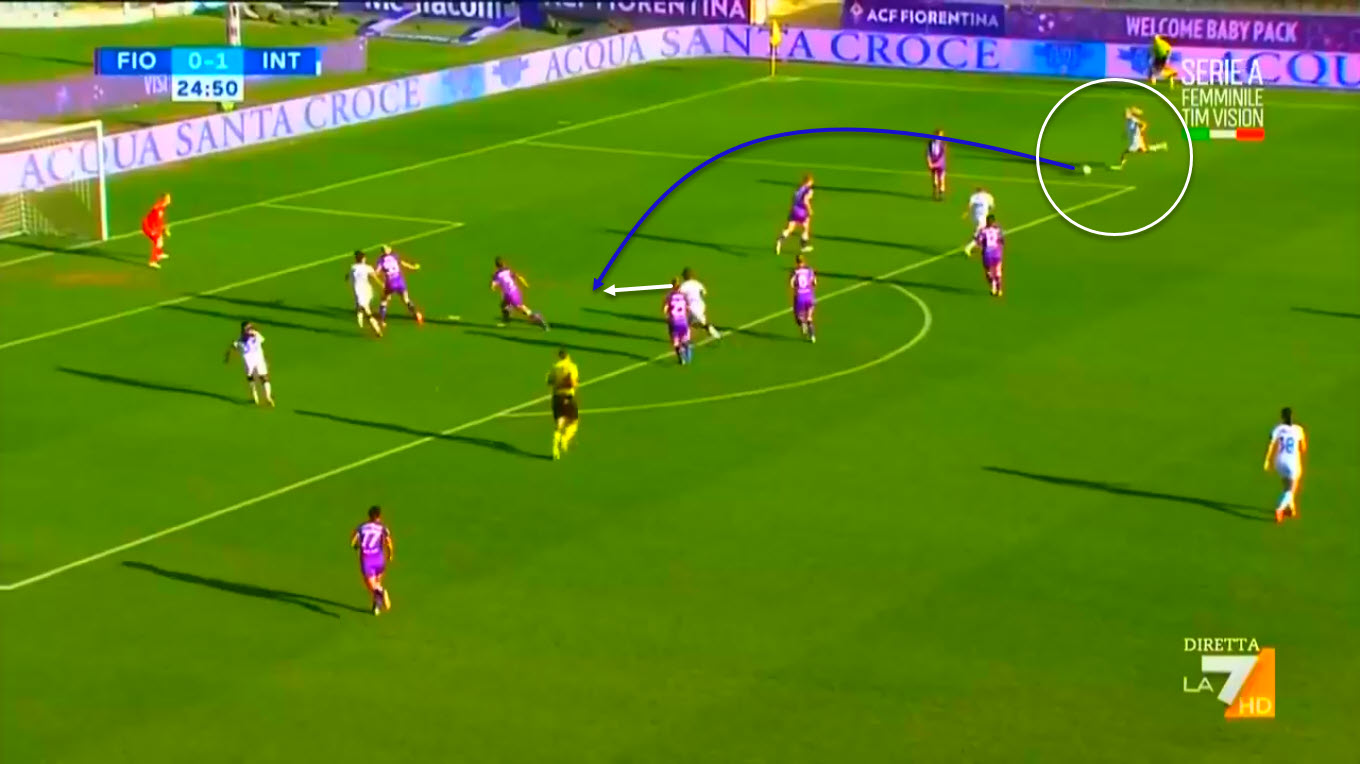 The good thing especially for Norway is that she does almost the same when she is used on the left-flank because she can cross accurately using her left foot. In the next example, Sønstevold was able to cross the ball with her left foot from the left-wing while she was disturbed by her direct marker. Yet, she was still able to cross the ball accurately for the player who was asking for a pass inside the box, but unfortunately for the team, the receiver of the cross missed her shot.

But this just highlights the efficiency of Sønstevold and the variety of options she can provide to the coaching staff in terms of playmaking. With such characteristics, Sønstevold is also able to play as a left-winger or a right-winger in a 3-5-2 or a 3-4-3 formation, in addition to her ability to play as a centre-back or as a right-back/left-back. 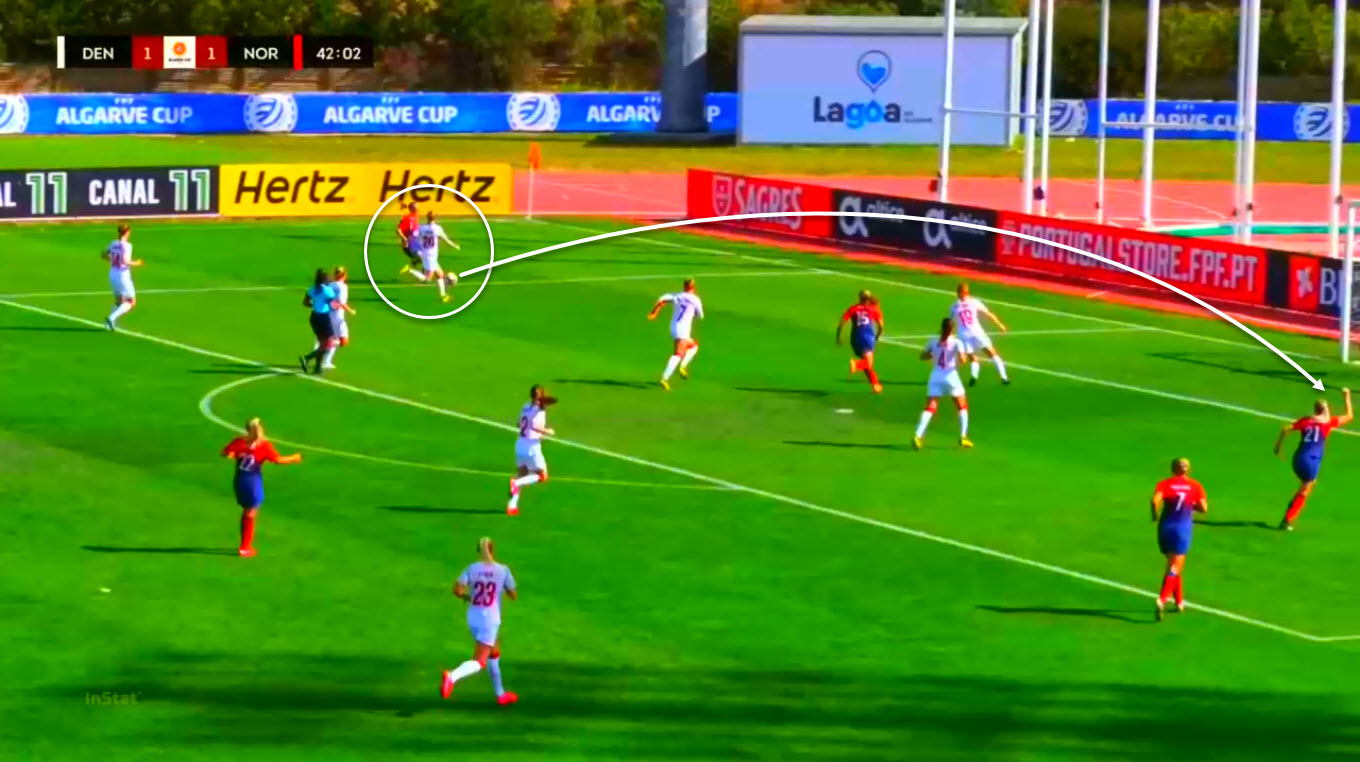 Sønstevold is a very useful player for both Inter and Norway and she can prove her worth even further during Euro 2022 if she puts on solid performances. This analysis has shown that the player offers a lot of variety in terms of roles and positions as she is an intelligent defensive player who has some good statistics so far. What she might have to improve in the future though is her level of aggression in duels in order to win more in defensive and in aerial duels. Other than that, being consistent in her performances both from an attacking and from a defensive perspective would make her develop even further and attract even more attention from bigger teams.