England vs Italy – a fixture that is likely to bring back sad memories for England fans thanks to the Italians besting Southgate’s Lions in the Euro 2020 final, a tournament that brought the nation great joy and hope along the way.

The circumstances differed somewhat in this UEFA Nations League tie, with Italy going through something of a rebuild following their failure to qualify for the 2022 World Cup despite quality players such as AC Milan‘s Sandro Tonali featuring, and England seemingly going through a period of uncertainty as well, with some different names from both the Premier League and Serie A featuring.

Following this 0-0 draw, England have now gone three games without a win (1-0 defeat to Hungary and 1-1 against Germany) – rare poor form for the side. The poor results have been matched by poor, disjointed performances, and most of England’s issues lie in attack – defending doesn’t seem to be a major issue. This tactical analysis will look at how England approached their latest fixture against Italy and why they were unable to find the back of the net. We will also analyse the defensive tactics deployed by England, and the attacking tactics in Italy’s approach. 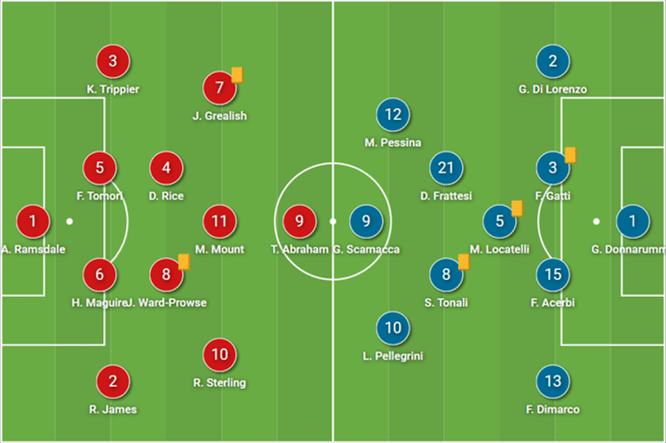 Southgate is no stranger to switching things up when it comes to the Nations League, major tournament qualifiers, or friendlies, and set his young England side up in a 4-2-3-1 shape. Aaron Ramsdale kept Jordan Pickford away from the number 1 slot in goal. Meanwhile, the back four consisted of Reece James, Harry Maguire, Fikayo Tomori, and Kieran Trippier – Tomori is a player that many England fans have wanted in the starting lineup for some time thanks to his impressive form with AC Milan. Declan Rice and James Ward-Prowse played the deeper central midfield roles with Chelsea’s Mason Mount ahead of them. Jack Grealish and Raheem Sterling occupied the flanks, while Tammy Abraham led the line.

Italy have refreshed their squad of late. An absence of familiar names like Chiellini, Bonucci, and Immobile have made way for younger talent. Roberto Mancini set up in a 4-3-3 shape, with Gianluigi Donnarumma between the sticks. At the back was Giovanni Di Lorenzo, Federico Gatti, Francesco Acerbi, and Federico Dimarco. Juventus’ Manuel Locatelli played the anchor role in midfield, with Sandro Tonali and Davide Frattesi playing ahead of him. Lorenzo Pellegrini and Matteo Pessina played out wide, with Gianluca Scamacca up top.

England well-drilled off the ball

Things have rarely been perfect or even close to it for England over recent years in terms of their tactical play. Terms like “experimental” and “a team in transition” seem to be go-to phrases when things aren’t going right for Southgate’s men, but one thing they have almost always been able to pride themselves on is their defensive work. Their shape, depth, and positioning have made them difficult to break down, presenting little opportunity to the opposition. Below is an analysis of England operating defensively in three different scenarios and areas.

This first example shows England displaying an early intensity to stop Italy from playing out in their desired way. Breaking this down, we can see that Grealish and Sterling (the yellow-marked players) are providing secondary pressing support, ready to press either of the Italy defenders ahead of them.

Mount and Abraham apply the immediate pressure in the box, and Donnarumma has a moment of madness under the pressure – he looks to play a first-time pass into Locatelli just outside the box, but the ball is cut off by Abraham. From there, Locatelli makes a recovery good enough to stop Abraham from taking advantage of the mistake. The energy off the ball at this early stage is good to see from England and shows they are able to perform under multiple tactical approaches defensively.

Above is an analysis of how England set up in a more defensive approach, deeper in their own half. We rarely saw this from Southgate’s side in this match, but when called upon, England executed the move well (for the most part). The back four is able to maintain good shape and width while not sitting too deep thanks to a lack of an Italian presence in the centre-forward zone.

There is little pressure on the fullbacks either, allowing them to hold their shape well. The midfield is positioned nicely – they don’t leave too much room between themselves as a unit and their back four, and remain compact between themselves. Other players who have regrouped to provide defensive assistance are able to mark other passing options or apply minimal pressure to Italy to dictate their direction.

This final analysis of England’s defending occurred during a textbook tactical approach – a mid-block accompanied by the nearest player applying pressure once possession reaches the wide area. With the pressure on the man on the ball, England’s setup around that is good too – Ward-Prowse in the middle is able to mark the Italy midfield beside him, while further up Harry Kane’s position allows him to apply pressure to the Italy CB should he receive the ball.

When you consider the players England have in the attacking ranks at the moment – the likes of Kane, Abraham, Grealish, Sterling, etc., seeing them go through three games and only scoring once is hugely disappointing. Over those three games, they’d average 12 shots per game with an accuracy of 33.3% – not the worst register of data considering that two of those opponents were Germany and Italy. However, there has still been a certain bite missing from England in the final third, despite flashes of good build-up play. Below is an analysis of some scenarios where England let themselves (and the attack) down.

It is well established that England are a side that like to control possession and dictate tempo in high areas of the pitch, which we can see an example of above. Reece James is in possession, and despite having three Italy players in front of him, he still should’ve found Raheem Sterling’s overlapping run with ease. Instead, James ignored the run and played a backward pass to Ward-Prowse, who was dispossessed almost instantly. Whether this habit of passing backwards/sideways instead of taking a chance going forward is by way of tactical instruction, or a result of a lack of confidence, it’s holding England back.

In this game, they played 109 backward passes and 274 sideways passes – both of which surpassed Italy’s total for those same metrics. You will notice that Mason Mount is also highlighted purple – his positioning in the analysis above doesn’t allow him to offer anything to the attack, but if he simply adjusted and made a run into the purple highlighted space just a few yards away, this would’ve provided another good option for James.

As previously mentioned, England showed flashes of promise in some of their build-up play. For example, in the analysis above, Sterling drifts out wide to receive the ball down the line. With his marker (Italy’s LB) following him to apply pressure, a sizable space opened up between the LB and LCB which was recognised by Mount, and he proceeded to make the run into that space. However, this promising chance ended as quickly as it started thanks to a dreadful pass from Sterling while trying to play Mount through on goal. While the pass selection was the correct one, the execution made it all too easy for Italy to defend with Mount only chasing the opposition down rather than carrying the ball through on goal.

On several occasions in this game, England were sloppy on the ball and gave away cheap passes that were far more simple than they were made to look. While this isn’t down to poor tactical structure, these small details and individual errors are often the difference in results. It could be the reason that in the aforementioned three games without a win, England averaged an xG of just 1.75.

As we take a final piece of analysis to identify England’s downfall in attack, we can start to get a better idea of the overall issue and it seems to be a mix of tactical and individual error. The image above looks like a very promising scenario if you’re an England fan, and if you’re an Italy fan, at this point you’re probably a little concerned.

Over recent years, we have become so used to seeing Grealish excel in positions like the one above – his agility and dribbling ability give him a huge advantage in one-versus-one situations, so you’d be mistaken for expecting to take the ball to his left and beat the RB to get to the byline – especially with three England players awaiting delivery in the box. Instead, the Manchester City record signing opts to turn backwards and play a pass to Ward-Prowse who was about 30 yards out – the set-piece specialist unleashes a shot that goes well wide, and the attack is dead. These scenarios should be what wingers dream of at night, and a player of Grealish’s calibre should be able to produce much better results than this. Again, it goes back to the idea that England aren’t ruthless enough and opt for the safe pass far too often.

Roberto Mancini’s side aren’t exactly in the best shape too – although they are in the middle of a genuine transition into a new era of players. You can see that there is potential in the squad, but there are also some rough edges in their play as is expected. Below is an analysis of two chances the Italians had against England.

As you can see from the timer in the corner, this chance came very early – something Southgate was likely angry about inside as it was a chance that could’ve been defended much better. The issue from an England perspective is that Maguire and Tomori are far too close to each other – there can be an argument for the whole back line as a unit being too wide, but in this instance, Tomori has to recognise the space to his right and block it off.

With this space open to exploit, Italy played a clever combination which started with Pessina passing to Tonali. Tonali then played the clever through ball into the path of Frattesi, who drove towards goal and should have opened the scoring – missing the target entirely from that position is a huge disappointment from an Italian perspective.

Here we see an instance of Italy attacking following a transition, looking to catch England out – and they partially succeeded in that thanks to the disorganised backline. Pessina is the man in possession, and the obvious pass to make would be to Frattesi coming in on the right, running into some empty space that is yet to be marked out by Trippier. Instead, Pessina, who got his body position into shape to make that pass, then opted against it and tried dribbling at the England backline. He ran into trouble and the attack broke down, with possession returning to England.

Decision-making and composure are both essential qualities for key moments like this, and Pessina failed to display either. Italy hit England with four counterattacks during this fixture, with just one of them resulting in a shot – a definite area for improvement for Mancini’s side.

Despite being two giants of international football, it’s quite clear both teams are currently some way off being the finished article. Italy have potential players to be excited about, and with someone as experienced and successful as Roberto Mancini running things, there is every chance they bounce back from the failure to qualify for the World Cup very quickly. England, meanwhile, have top-quality players at their dispense, the tactical approach in attack just needs some fine-tuning, and individuals need to display more confidence and onus in the attack.