In recent years, Norway was not dominated by Rosenborg or Molde anymore, as Kjetil Knutsen led Bodø/Glimt to huge success in both domestic competitions and in Europe. Many players developed and moved to bigger clubs through this journey, such as Lens’ Patrick Berg and Jens Hauge on loan at Eintracht Frankfurt from AC Milan. Apart from these players, there are also many others who maintained a high level of performance, and Alfons Sampsted is one of them. 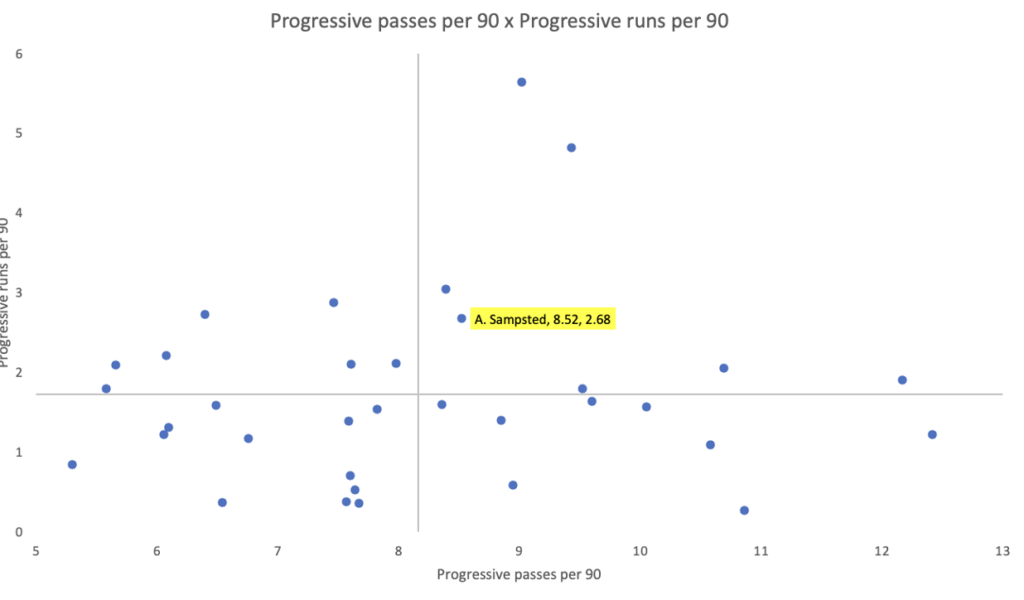 Data analysis is a quick method to give us brief pictures of the playing style of the player. We drew a list of Elitserien full-backs to compare their stats and see where our target player of the article stands. 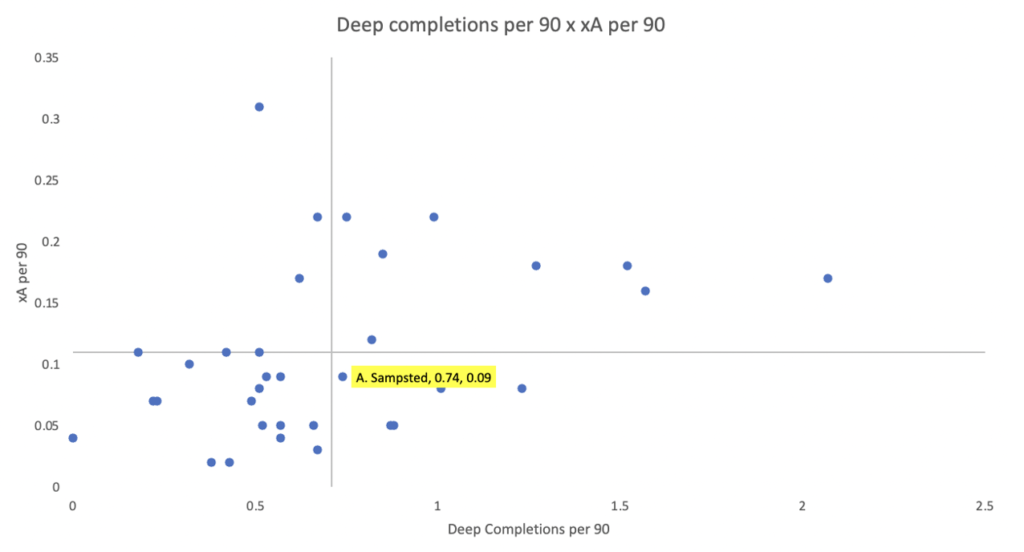 In terms of threat to the goal or chance creation, Sampsted was not even one of the best in the league. He has 0.74 deep completions/90, which means he put more balls into the six-yard box than the others, but that was not equivalent to being able to create assists for teammates, because his 0.09 xA/90 was below average.

Without being very sharp in one or two metrics, even when we are doing the data analysis to scout the best players in Elitserien, it is easy to miss out the presence of Sampsted. But through our tactical analysis and scout report, we will show you why he is far more valuable than the number suggested, not just because of playing for a team like Bodø/Glimt, but also about his personal quality with the ball.

Firstly, we need to know that Knutsen’s Bodø/Glimt is a team with very good balance, with five attackers and the other four to five deep players to construct the attack. While they were also the dominant side in the league the highest possession% in the league (60.2%). Therefore, what they do with the ball is important and Sampsted definitely played a role in the ball progression. 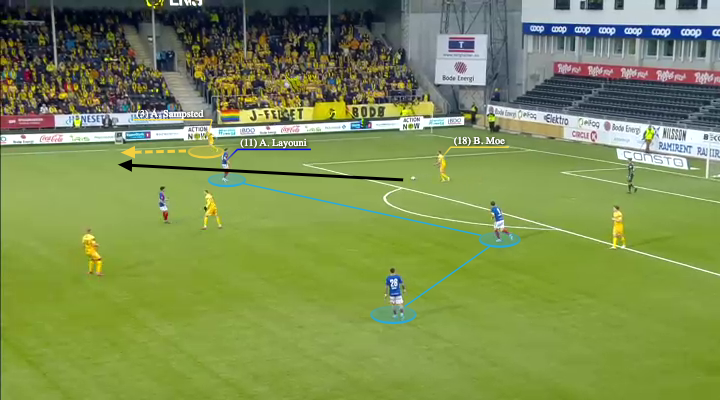 First of all, Sampsted had good positioning sense and he understood the tactics of Knutsen very well. When he was a part of the build-up, he has the awareness to move into higher spaces to receive the ball behind the line, so that the pass he received already broke a line, and then he could see if there was a chance to play forward or going back to the centre-back without an opposition pressing him at his front.

Here, for example, way before Brede Moe made the pass, Sampsted moved forward and position himself higher than the left-winger, so when the ball arrived, he was past the first line already. 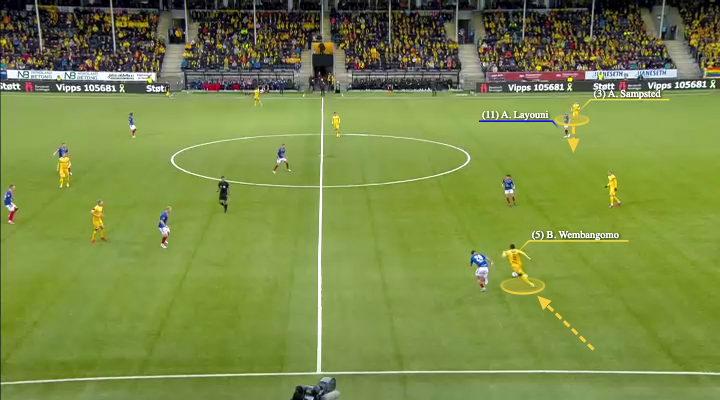 Instead of being high and wide, the role of Bodø/Glimt full-back can be a bit more comprehensive because sometimes they needed to take an infield position to balance the structure. When the opposite full-back was going high or trying to take on the opponents as Brice Wembangomo did above, Sampsted had the awareness to move inside to position himself in the centre. So, even if the dribble was unsuccessful and the opponents had a transition there, Sampsted could catch Amor Layouni as soon as possible to minimize the threat. 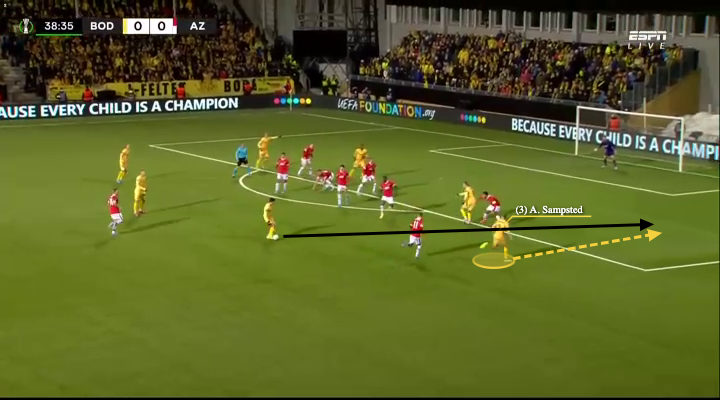 When the ball is on his side, Sampsted did also demonstrate the ability to attack the wide spaces like a conventional full-back. The goal created against AZ Alkmaar is a situation in which Bodø/Glimt pinned the opponent in the last third, and Sampsted dashed forward to use spaces outside of the formation as we have shown above. 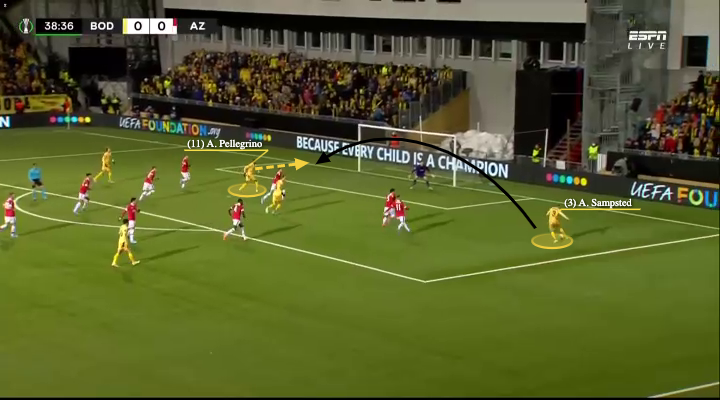 After he was released by a teammate, Sampsted did well enough to put the ball between the defenders and goalkeeper, allowing Amahl Pellegrino to attack the cross and it became 1-0.

In terms of position, Sampsted was decent as we have shown in the above analysis. But actually what caught our eyes was the quality of the ball. As a player, he showed a good ability to adapt to situations and solve problems with different skillsets in his toolbox, which was impressive. 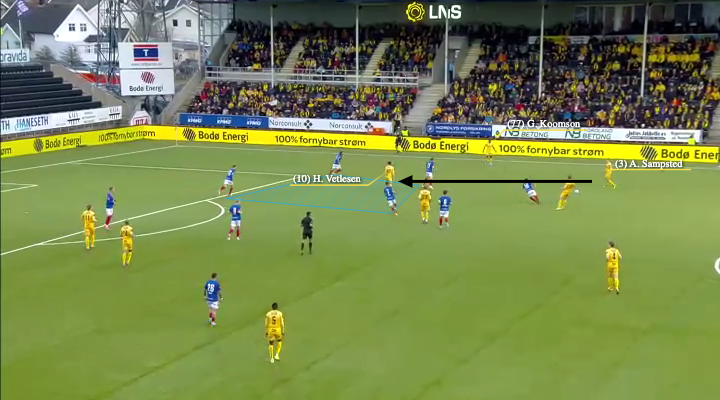 Firstly, when he has the ball in the wide zones, Sampsted had good eyes to see spaces inside and the players available in the half-space, who was always constantly occupying that zone under Knutsen’s tactics. Sampsted also had a good ability to find the player inside with a pass, which is uneasy given the passing channel was narrow and the defenders would try to block that route with their body angles. 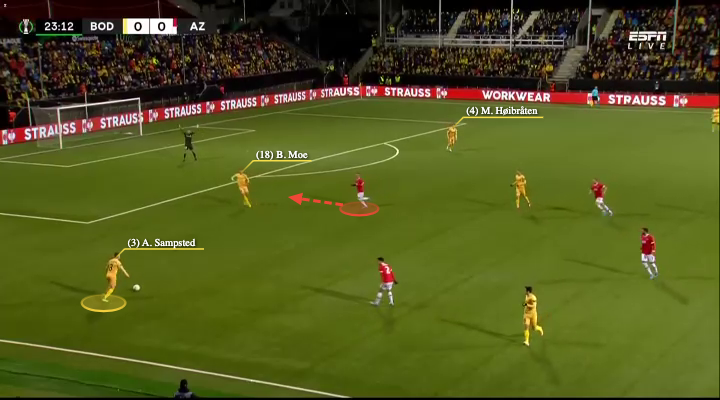 But then we are going to show Sampsted’s quality in different situations and how he observed the opposition. Here, He had the ball and he also saw the AZ striker was going to close Moe off. The Iceland right-back had a good habit to avoid speculation by kicking the ball forward, so he wanted to pass the ball to a teammate.

Sampsted spotted Marius Høibråten on the other side, but since the left centre-back was too far away, he carried the ball inside to reduce the passing distance. 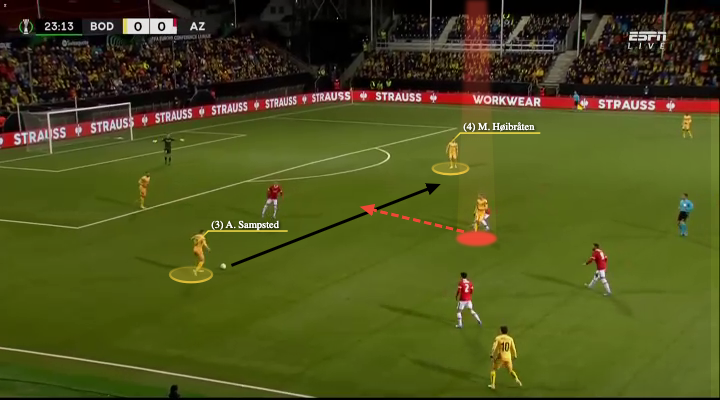 But there was a new problem even Moe offered the depth to take the striker out of position, which is the AZ 10 was lurking behind Elias Hagen as we highlighted above. If Sampsted passed the ball right now, it might be intercepted by the opposition. And it was uneasy to spot the action of the AZ 10 as he was using Hagen to hide his intention, but Sampsted showed enough composure and calmness and not rush the pass. 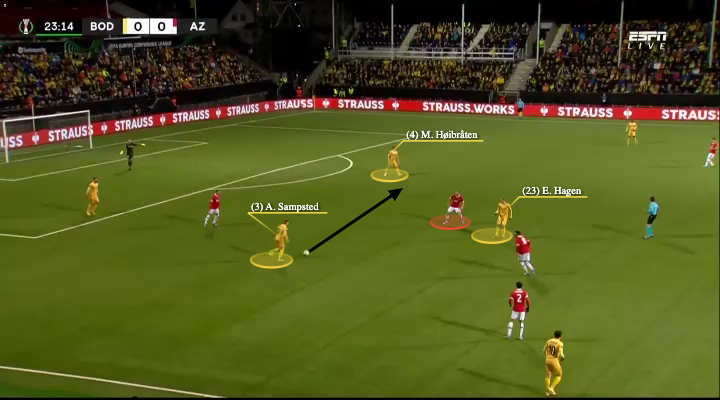 Instead, Sampsted took another touch to delay the timing of the pass a bit, which had a great effect, as a result. Now, because Hagen was moving higher, the AZ 10 must choose between going forward to intercept that potential pass, at the expense of leaving Hagen free, or vice versa.

At last, the AZ 10 moved closer to Hagen and now the passing lane was very safe, and Sampsted simply found Høibråten, and now Bodø/Glimt were going to develop the attack on the other side. 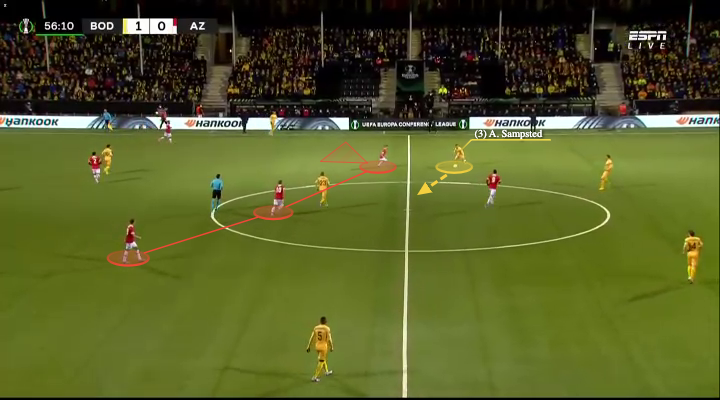 The most impressive trait of Sampsted’s football was how good he was dribbling infield, that was something very useful in the construction phase, as we have shown above, some opponents like AZ would want to use the winger to press from the outside, so the first action of full-back could not go forward. Then, when they carried the ball to the centre, the ball might be under the wrong foot and it was more prone to error. 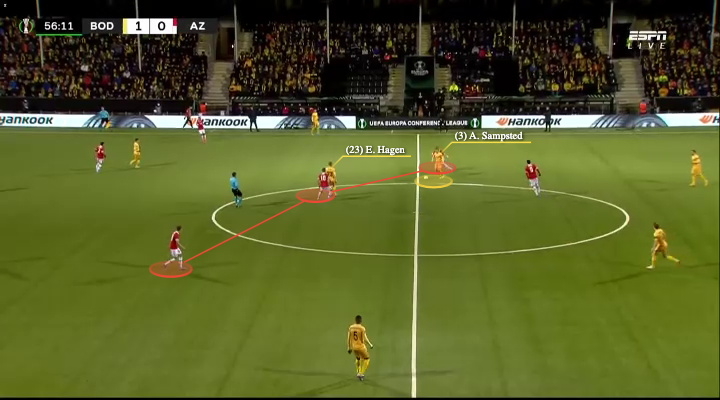 But Sampsted was not afraid of such kind of pressing, because he was good at carrying the ball inside. Also, when he was doing that, he used his body to separate the ball from the opponent as we have shown above. But now the problem was Hagen was marked by the opposition tightly, if he passed the ball now, it was easy for the opponent to defend. 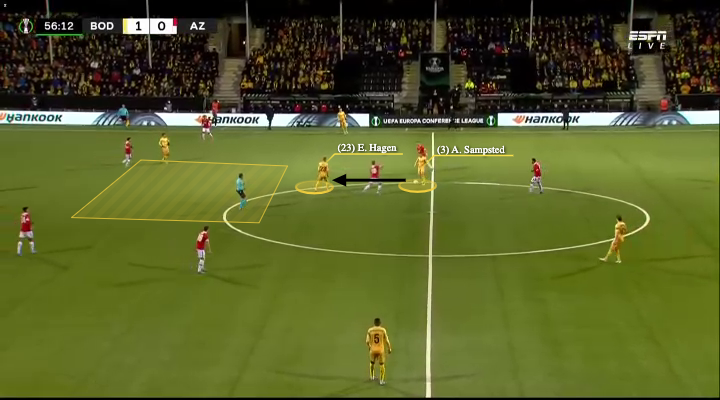 Therefore, Sampsted delayed the timing of the pass again, continuing to drive forward until he draw the marker out. This sort of pressure absorption was very important as he can attract opponents to create spaces for teammates. Now, Hagen was free with spaces behind to turn because Sampsted’s dribbling, and he had a good mindset and ability to break lines in these situations. 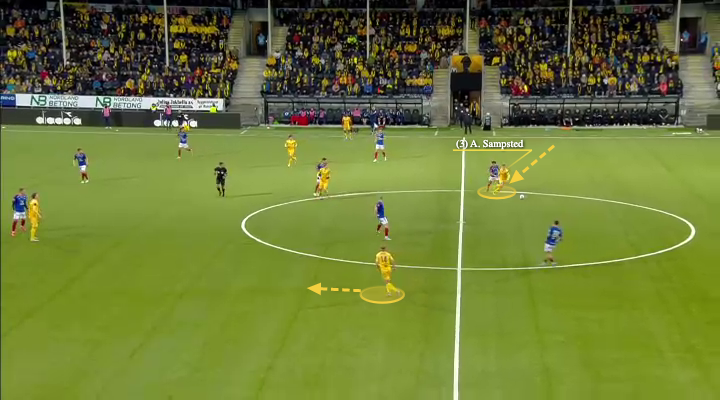 We can see more of that examples here. Sampsted once again carried the ball inside, note that in the whole process, he used his body to separate the opponent and the ball so the defender could not make a challenge.

Because Sampsted was good at breaking the lines, it was also important as the Bodø/Glimt players do not have to pick up the ball, they can move into spaces to receive the ball. 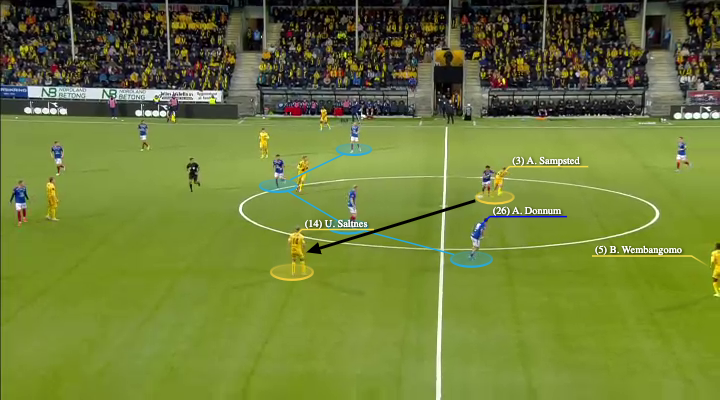 Now you could see how the attack was developed lively as the receiver, Ulrik Saltnes was behind the lines of a 4-1-4-1. Then, when the pass came, it broke the Vålerenga midfield and Bodø/Glimt could go all the way. One more credit that should be given to Sampsted is he was able to make that pass under pressure, which further proved his composure with the ball. 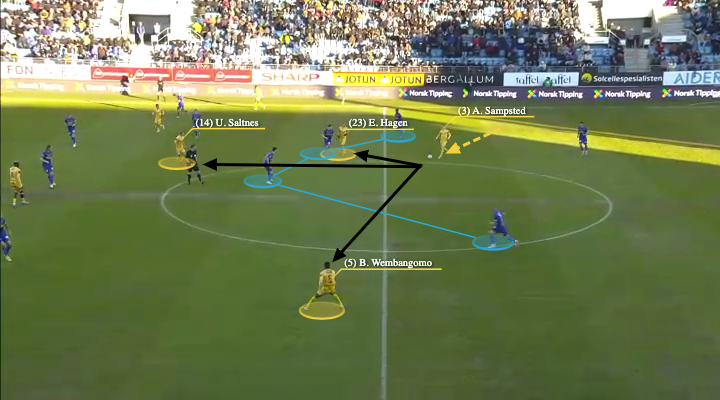 But connecting the teammate in the diagonal half-space was not the only option for Sampsted. Instead, he could be very dynamic in that action and find players in the same vertical zone too, as we saw he was in another similar situation here.

This time, although Wembangomo was clearly a free and easier option, and Hagen was just in front of Sampsted, he chose to find Saltnes behind the second line with a vertical pass. That passing option was on since Sampsted could also use his left foot to pass the ball, which was rare for right-backs and more difficult for opponents to block the passing angle.

That’s why Sampsted was an interesting player, he played very well in the construction phases of the team with some abilities to produce chances in the final third. He can break the lines and carry the ball, handle the pressure, and doing many things which the other right-backs rarely do.

Sampsted is a player literally born in Scandi football. His first country outside Iceland was Sweden, where he played for Landskrona and Sylvia, but he never got a chance to show his quality in Allsvenskan as there were only five IFK Norrköping first-team appearances in his career. But then, he was signed by Bodø/Gilmt in 2020 and playing there until now, being one of the regular players of Knutsen.

His contract is ending by the turn of the year and with his profile, probably some clubs in bigger leagues would see his potential. So far, Sampsted was decent on the ball but in terms of physicality, defending, and how to track back to cover spaces and handle the 1v1 situations, the was big room for improvements. But his cleverness in possession is something that you do not often see from a full-back, and we expected him to grow into something more in the future.