Crystal Palace eased to a 2-0 victory over Fulham at Craven Cottage in the first day of the Premier League 2018/19. More importantly, whoscored.com chose Aaron Wan-Bissaka for the man of the match with a score of 8,63, which is pretty high if we consider that he is a right back. So, in order to understanding this accomplished rating, we should analyse what he achieved and did in that match.

Wan-Bissaka is a young defender, only 20-years-old, but he is already a full member of the senior team although this will be his first complete season with the squad.

He made his debut in the Premier League this February against Tottenham Hotspur and also featured in the next two games against Manchester United and Chelsea. So, he made a quite impressive start which led to a break to the senior squad.

Roy Hodgson had this to say about the youngster: “The sort of ones where you are almost putting him to sink or swim and he certainly learnt to swim very quickly.”

This means he can handle the pressure well at a young age. Doing your best in tough circumstances is a valuable ability.

His position is fullback in spite of the fact that he started as a midfielder in the Eagles’ academy. He came to the Crystal Palace academy at the age of 11.

As you can see both teams lined up with a strong starting XI. Both sides have well-known players like Sakho, Zaha or Benteke on the away side and Schürrle or Seri on the home side. 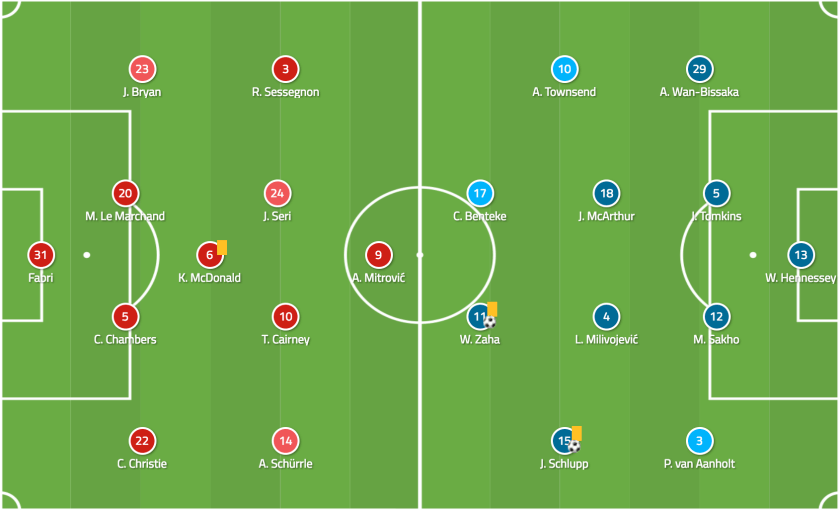 Due to Fulham’s quick wingers – Schürrle and Sessegnon – they like to use their wingers regularly during the attacking phase. The opponents had to pay attention to this, especially for the 18-year-old talent, Sessegnon, who faced up against Wan-Bissaka on the flank.

Actually, he was responsible for marking Sessegnon and did it superbly.

As I said, his biggest task in this clash was to handle the threat that Sessegnon could pose on the left flank. Thus there were some cases when he was in an isolated position against Sessegnon. As the image shows, if the Fulham winger got past the defender they could create an dangerous chance, however, Aaron has the ability to handling greatly the 1v1 situations. He completely focusing on what the opponent does, therefore he never let the them bypass him. 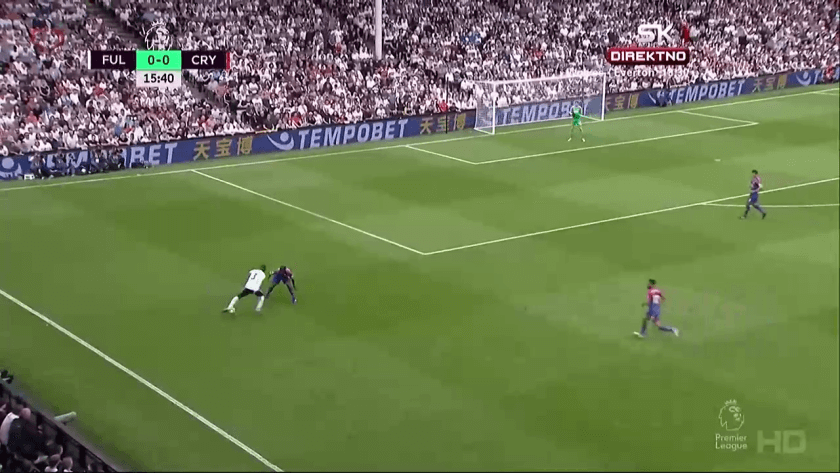 There were some other kinds of 1v1 situations, where he had to use other skills to cut off the opportunity. Fulham sometimes forced the opponent’s defence and especially Wan-Bissaka to a race, where Sessegnon could use his speed. However, Aaron also showed great pace. For example in this situation, where Fulham pass an aerial ball behind the defensive line, Wan-Bissaka overtook Sessegnon from a deeper position. 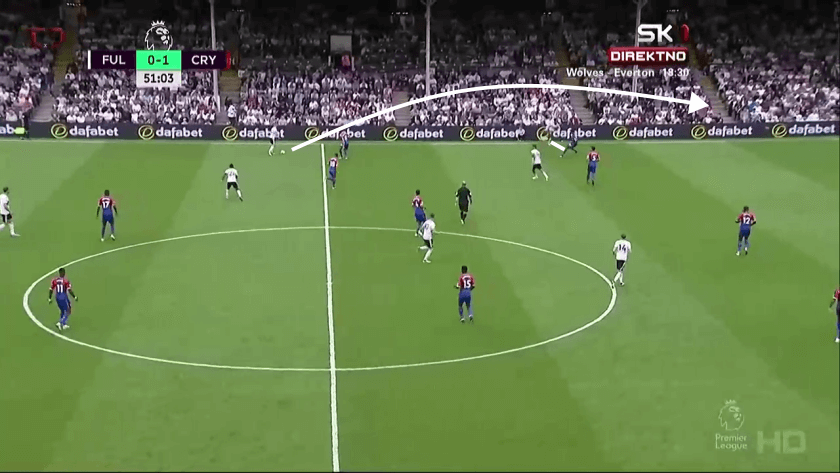 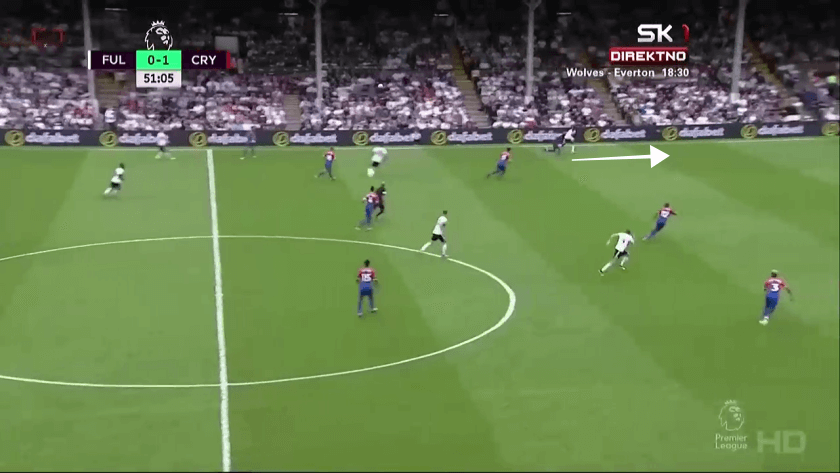 The same happened in this cross. 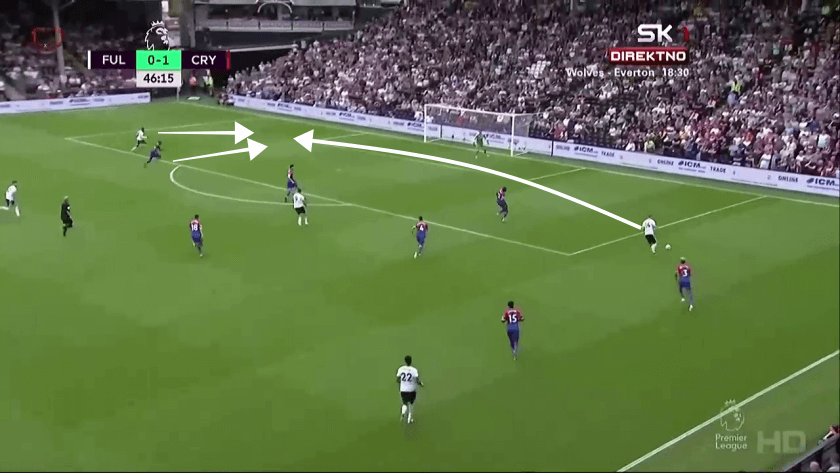 He had other occasions when he cleared the situation, some of them quite dangerous. 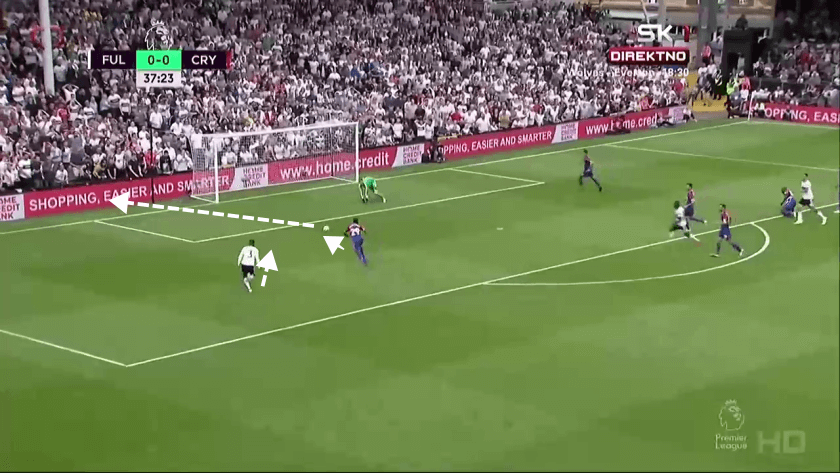 Wan-Bissaka showed in this match that he is capable of tackling. He performed 4 tackles, 4 interceptions and 6 clearances – an outstanding set of statistics. Although this was not an isolated case, he has equally impressive stats from last season. He tackled 4.1 times per match and 2.1 interceptions and 4.9 clearances.

Therefore, this is more proof of his great ability for positioning and reading the game because this is the only way to boast these good stats, especially as a full-back.

There was a case when Aaron read the game perfectly and managed to follow Sessegnon’s infield movement before tackling him. This also showed the level of concentration he has in a difficult situation. When a defender has split his attention between the ball and marking, it can be a hard task to do without mistakes. 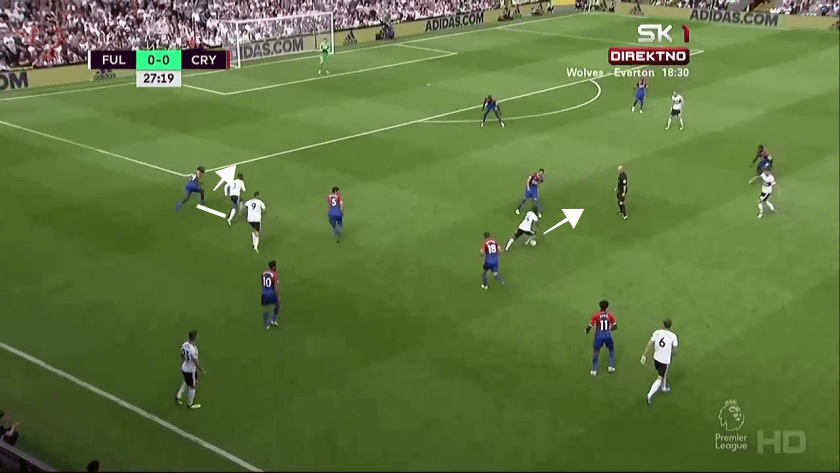 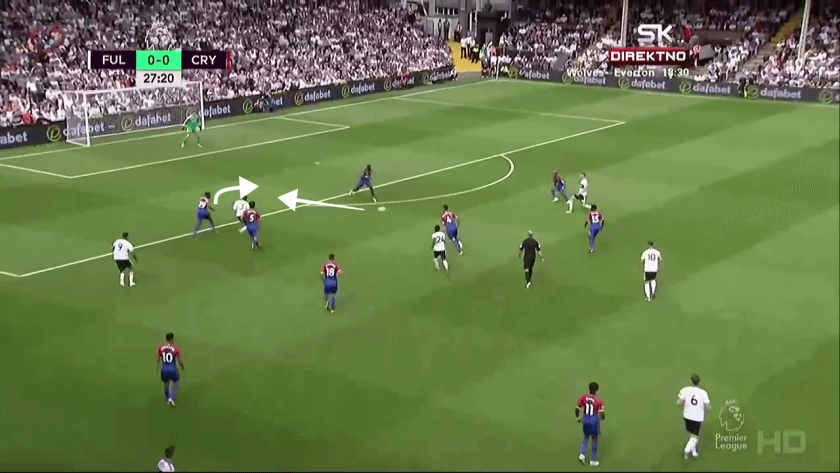 And lastly, in this situation, Fulham break from the right wing to the middle then quickly tried to switch to the other flank, but Wan-Bissaka was able to prevent this pass. The timing of his run was good, thus he could anticipate the pass. 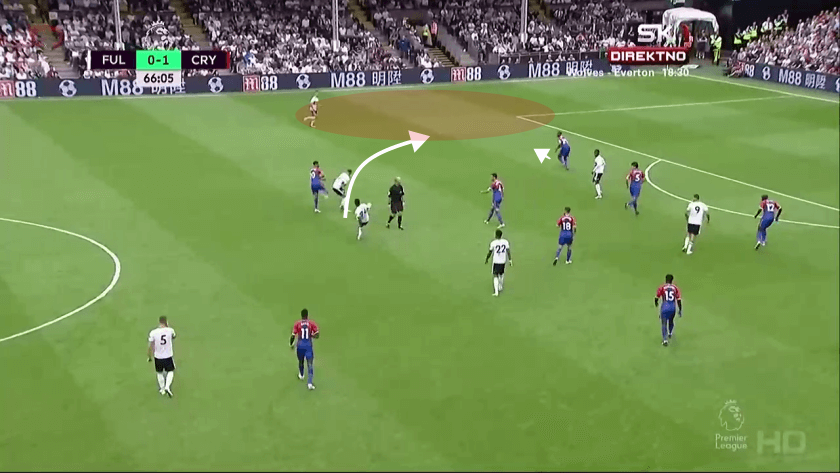 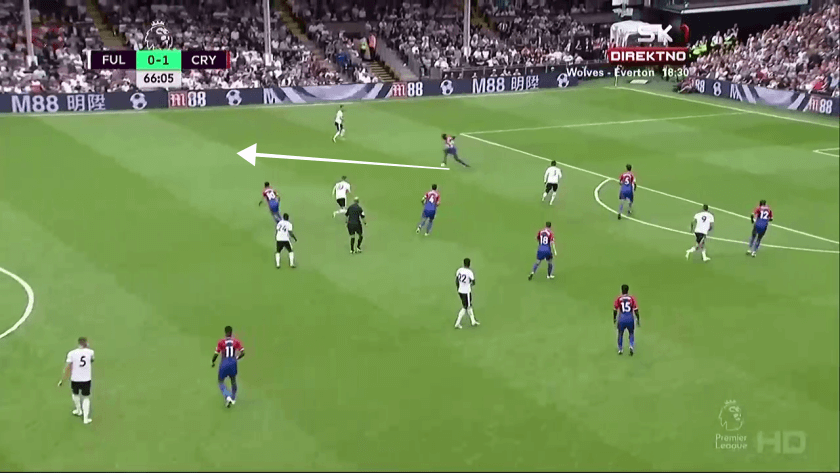 The continuation of the situation above was a quick transition from defence to attack, which led to the second goal of this match. Wan-Bissaka, after intercepting that ball, accelerates and beat two opponents. Fulham could not take him down, only for a moment, but then he continued the run and quickly bypassed the other Fulham player. Then he made a good pass towards a team-mate.

Unfortunately, he was not as active in the attacking as he could be due to his role, which was just a supporting role in this phase and in this match. Although, there was another interesting occasion where he showed some skills. 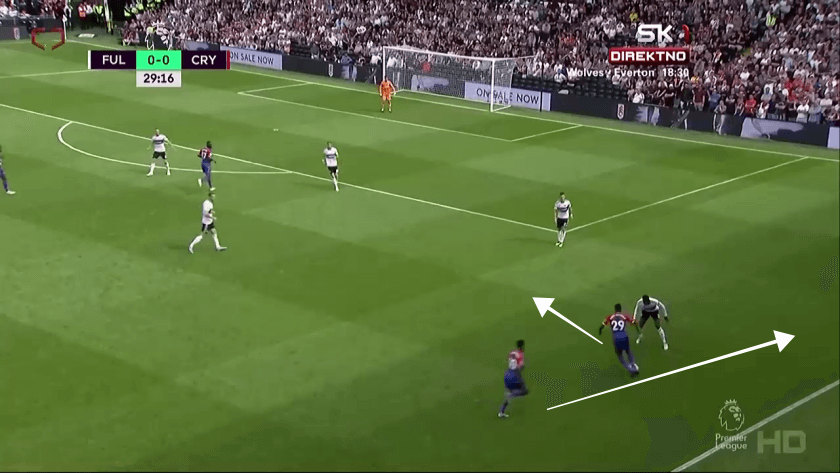 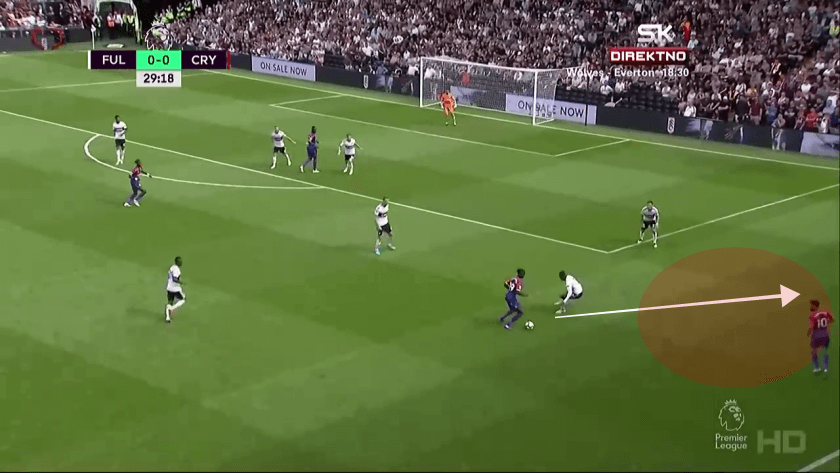 As you can see, he cleverly chose to trying to cut inside with the ball. For this movement, he had two reasons. Firstly, he finds space in the halfspace. And secondly, he created space for the team-mate in the flank.

He showed such maturity for a 20-year-old defender, with a great vision and read of the game which helps him to position himself superbly, thus he was able to prevent plenty of dangerous chances. Otherwise, he eliminated lots of danger from Fulham’s attacking game whilst taking Sessegnon out of the game. He has quite good awareness of what the attacker will do and he can prevent these attempts. Also, he has some pace and agility so he could contribute to the attacking phase much more than we saw.

Despite the fact he made his debut only this year, his career and development are rising, thus if he might able to continue this rate of improvement he will be a star soon. 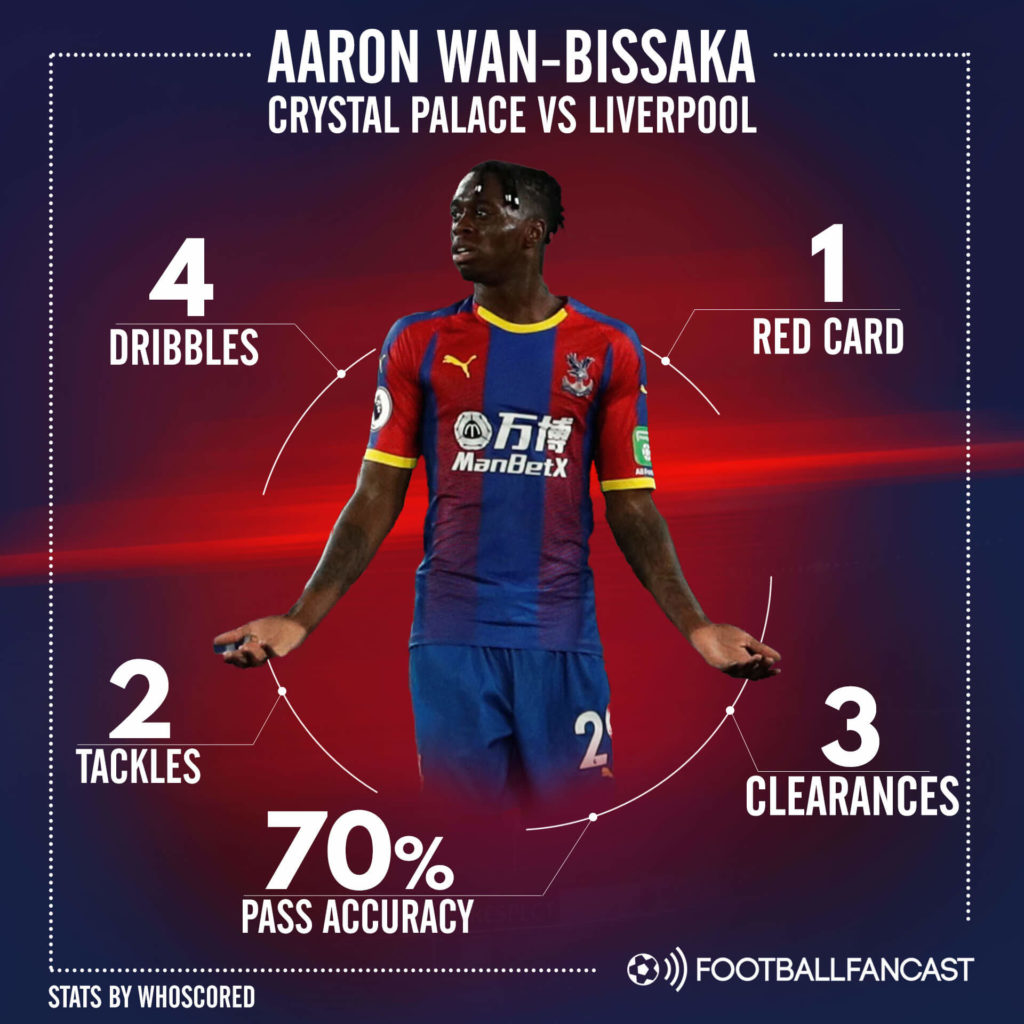 Nikola Vlasic is Croatian offensive midfielder who plays for CSKA Moscow. This scout report will contain tactical analysis on Vlašić […]

João Félix has started the season in an impressive form. After an inconsistent 2019/20 season in which we could only […]

Forget Greenwood: Why 18-year-old could be a star in the making for Man Utd

One of the most exciting signings of the summer transfer window, at least as far as Manchester United fans are […]