How Chelsea drew on spaces in Huddersfield low-block

Chelsea F.C. kicked off the season with a promising 3-0 victory away at Huddersfield. Thanks to Kante who teamed up well with Jorginho and tackled some of the unsettled elements of Chelsea‘s Sarriball in the Community Shield defeat against Manchester City. The first away performance of the Blues gives hints that Sarriball and 4-3-3 are effectively making their way in Chelsea’s squad inducing them to play more and more offensively.

Huddersfield played with low block 5-3-2 in their defensive phases while only occasionally extending their press in the first quarter of the game. Their front two kept Jorginho double marked almost blocking him to dictate the game or to fill the hole in Chelsea’s passing structures further up the pitch. This often gave the home team numerical superiority over Chelsea in the central regions.
However, due to the low block defence, the home team couldn’t do much with the ball in their attacking third. Their front-two almost always got outnumbered by Chelsea’s back-four including the low-staying fullbacks, or by Chelsea’s back-two and Jorginho during transitions, eventually losing possession to the away team.

Chelsea is still to fully adapt to Sarrismo the way Sarri wants, but they are becoming more offensive than before. That’s enabling the Blues to be more attentive to open spaces and even pockets of spaces to get their possession game up and forward. Possession for the sake of attack.
Chelsea was attentive to the whole open planes, vertically and horizontally against Huddersfield. In an instance during the third quarter, Chelsea brilliantly made it from the right end of the pitch to the left via short passes within the narrow yet open plane between Huddersfield’s lines.

The wingers were also equally aware of the spaces as well. Due to Chelsea’s intense passing and the home team having to double mark Jorginho backed with the defensive cover by their midfielders, the play got compressed for a good part of each build-up phase by Chelsea. This opened up at least one of Chelsea’s wings by the end of these phases. While Chelsea’s play also concentrated at the right flank, Willian was found mostly the one with an open left flank ahead mainly during transitions.

Pedro brilliantly used his body position, dribbling and passing in some instances to counter press Huddersfield and transit the play into the open regions across the pitch. In fact, it was Pedro’s on-the-ball work which set Willian up for the assist to Kante’s goal.
Not only Chelsea was attentive to the open planes but also the pockets of spaces in between the defenders. One way to keep the passing game vertically forward by Sarri men was the bumping of players from behind the ball-carrier towards the dangerous pockets to receive a pass when Chelsea has been in attacking phase. This unexpected ‘bumping up’ also made Chelsea players use the gaps in Huddersfield’s defence to conclude attacks before they got crowded and blocked by the opponent defenders. Chelsea’s first two goals were the direct and indirect outcomes of this attacking style.
Kante was another necessary element who kept Chelsea’s offensive build-up up and running by being attentive to the pockets of spaces especially when Jorginho got double marked and isolated. On the other hand, Jorginho kept his markers at the back occupying them enough to be unable to quickly respond to the ball in that area. Jorginho’s defensive positioning at the base of the midfield allowed Kante to go up and find spaces to drop in. This way Kante always made ways for his teammates out of the opponent press with his first touches and quick off the ball movements.

Chelsea followed zonal gegenpressing by forming the press structure in active areas. The wingers often dropped back along with the low-staying fullbacks to gain numerical superiority over the opponents at the flanks.
This numerical superiority is linked with Sarri’s gegenpressing technique where the touchline width is used as an additional marker to complete the pressing structure. This helped the away team both off- and on-the-ball.

Sarri men are now comparatively quicker to find and drop into spaces to keep the passing game up and running across the vertical planes, as compared to their last season where the backward passing dominated over them. Jorginho is ensuring his strong offensive presence, and if marked, he gives a tactical advantage to his team by occupying the opponents in pressing him thus opening spaces in the regions ahead of him. However, Sarri still needs to work on the finishing end or the real nine, Morata or whoever to take his place. Against intense opponents, Chelsea would need some natural finisher, if not clinical.

Following their virtual loss against Juventus due to covid-19 issues that prevented them from going to Turin, Napoli looked forward […] 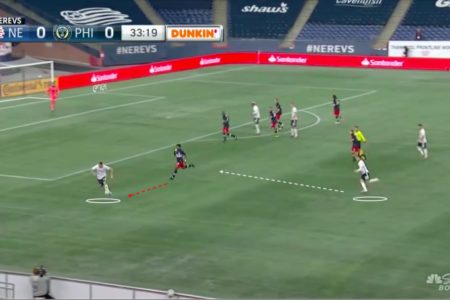 As the MLS regular season nears its end, two of the top teams in the Eastern Conference faced off. The […] 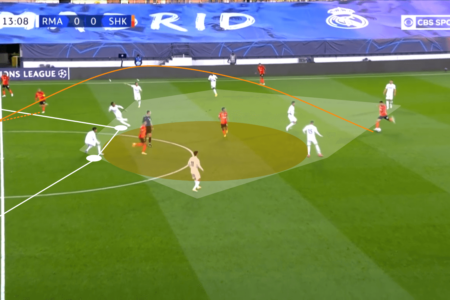 “We have had ten important casualties. Ten!” Shakhtar Donetsk coach, Luis Castro didn’t hold back in his interview with MARCA, […]