Aarón Caricol, known as Aaron Martin, was deemed surplus to requirements by Espanyol only this time last year. He was allowed to leave on loan to German Bundesliga side FSV Mainz 05, in a deal which had just a €6 million buy out clause attached. It took until only November of the same year for Mainz to decide they were going to activate this.

If we fast-forward one year from his move away from Spain, he is now one of the most exciting young left-backs in German football, with a €40 million buy-out clause in his new contract. If a club were to pay that fee to sign Martín, it would make him the third most expensive left-back in the history of football, behind only Lucas Hernandez and Benjamin Mendy. It has certainly turned out to be an excellent piece of business from Mainz, and they will hope the Spaniard stays committed to continuing his development at the Opel Arena for as long as possible.

This scout report and tactical analysis reflects his performances from last season, as well as assesses his targets and potential contribution to Mainz for the new Bundesliga season.

Martín grew up in Catalonia and joined the Espanyol academy at the age of eight. After a promising season for Espanyol B in the 2015/16 campaign, Martín was promoted to the first team, where he made 62 appearances in the next two seasons.

It came as somewhat of a surprise then that Espanyol were all too happy to let him leave on loan to Mainz last season, where he went on to make 34 appearances in all competitions and was part of a defence that kept seven clean sheets.

Martín was a consistent performer for Mainz last season, but it was his the growth in his role as an attacking full-back that was particularly interesting.

In the first couple of months of the season, he was slightly more reserved in his attacking intent. This was partly due to Mainz playing a formation that involved a winger playing in front of Martín. They experimented with a 4-4-2, a 4-1-4-1, and a 4-3-3, however, it was Head Coach Sandro Schwarz’s decision to use a 4-3-1-2 for the first time in October that allowed Martín to flourish.

This was a new formation for Schwarz and it involved playing three central-midfielders with a number ten playing behind two forwards. Due to the narrow nature of this formation, the full-backs are expected to offer support in attack at every opportunity, yet not neglect their defensive duties. In short, it is a formation that is incredibly demanding of the two full-backs.

The analysis above is of Martín’s passing in a 4-2-3-1 formation against Nürnberg at the beginning of the season. The difference compared to the pass map below from a game later in the season against Hoffenheim, in a 4-3-1-2 formation, tells us a lot about his transformation.

We are able to see a huge difference in the areas of the pitch that Martín is operating in. At the beginning of the season, the pass map is one of an orthodox left-back. Yet when playing against Hoffenheim in the 4-3-1-2 the majority of the map looks like a traditional left-winger’s and demonstrates the attacking influence Martín began to have on the team as the season progressed.

His passing stats aren’t anything spectacular, averaging an 80.5% completion last season. However, his 67.8% of accurate passes into the final third suggests that playing him further forward will be beneficial even without his ability to take on players and make crosses.

Mainz have continued to predominantly use this formation in the preseason as well as in last weekend’s shock DFB Pokal loss to Kaiserslautern.

A quick look at Martín’s heat map from last season shows how attack-minded he is as a player. He constantly looks to get forward past the halfway line at any opportunity. Last season he registered a very respectable 2.52 progressive runs per game. This was the fourth-highest amount amongst left-backs in the league.

He is excellent when running with the ball. His 77% dribble success rate was the second-highest in the Bundesliga last season. Despite not scoring he still contributed four assists, and possibly could have had more, with his xA being 6.22.

Martín’s considerable pace is one of his biggest attributes and is one of the main reasons he is suited to the tactics used by this Mainz side. He is able to join in an attack regardless of his deep starting position.

When defending he tucks in tightly to the rest of the Mainz back four, however, is a huge asset in transition when Mainz counter-attack, and can be the furthest player forward in an instant. His speed is most devastating on the quick break and we can see an example of the types of runs he makes to support such a break above.

His high-positioning in attack is a recurring theme and means he is influential even when it is not a counter-attack. When Mainz are patiently building an attack in the opposition half Martín remains high and wide, and will often look to be played in behind the right-back when the ball is not down his flank.

His wide-positioning facilitates space in the defensive lines for his teammates to probe. To go with his pace, Martín is excellent when playing quick one-touch passes in tight spaces and often shows neat inter-play when supporting his forwards, before playing a cross. 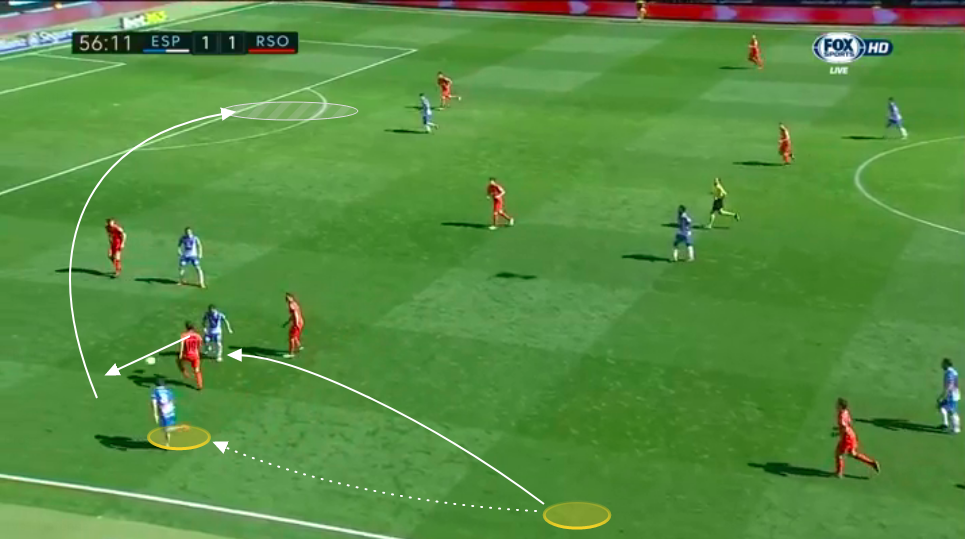 Due to Mainz’s narrow formation, Martín often hugs the touchline to provide much-needed width. The 4-3-1-2 gives him plenty of space to venture forward, find 1v1 situations, and make crosses. The left-back plays an important role in getting the ball into the box for Mainz, and last year made 4.42 crosses per game. There were only eleven players in the Bundesliga who made more crosses per game.

The biggest concern for Martín is that, despite his high volume of crosses, he was only completing 31.8% of these last season. This is an area he will hope to improve in as the season progresses.

It is worth noting that he is anything but one-dimensional in his wing-play. He has good attacking instincts and makes positive runs inside into the half-spaces. What is consistent though, is his forward runs are always at speed and with purpose, making him very hard to track.

If a teammate further forward has taken a wide position on his flank, Martín underlaps. He was able to provide an assist doing so against SC Freiburg in the 2018/19 season.

We will likely see the left-back cut inside as often, if not more frequently throughout the new season. As a player with such attacking prowess, there is no doubt he wants to add goals to his game. His shooting map from last season suggests he understands that cutting inside is a good way to achieve this, even if he didn’t score.

Martín is unquestionably a modern-day attacking full-back. However, defensively he is excellent as well.

He produced a string of sturdy defensive performances for Mainz last year, winning 54.7% of his defensive duels. He also made 4.37 interceptions per game, and 1.78 clearances too. These are respectable stats for a 22-year-old left-back, let alone when his attacking exploits are taken into account.

Defensively, Martín is at his best in a 1v1. Once again he uses his pace to his advantage. He sits close enough to the defender that a pass isn’t the right option for them. This encourages them to take him on.

We can see above how Martín is close enough to shut off the winger’s passing options, and sits inside, encouraging the attacker to take him on down the outside.

There are few players that would be able to beat Martín in a foot race and he knows that. When taken on, he is often able to get himself quickly between the player and the ball. If not, he is a strong enough defender to wait for an opportunity to time the tackle.

He only won 41.4% of his aerial duels last season and will look to improve on this. Mainz won’t be too upset if he doesn’t become a dominant force in the air though, and his 1.8m frame suggests that might be some way off from happening.

For a player that makes so many crosses, and is such an attacking influence for his side, Martín must improve on his accuracy if he wants to take his game to the next level. However, he is nevertheless an exciting attacking prospect, who doesn’t neglect his defensive duties.

Mainz is a club where the Spaniard will continue to grow and he will do so out of the limelight of the Spanish media. He is playing regular football and in a formation that highlights his best assets.

This will be a huge season for the left-back, and with clubs taking notice of his performances there is a good chance that pricey buy-out clause could be met, should he continue to improve at such a rate as he has done so far in Germany.