Chelsea Women hosted Aston Villa Women at Kingsmeadow last Sunday for the sixth fixture of FAWSL and the result was a 3-1 win for the Blues who are now at the top of the standings alongside Manchester United and Arsenal. Yet, both teams are still to play a game and therefore Chelsea risks being third with three points of difference compared to the first.

On the other hand, Aston Villa couldn’t keep their good run of form going and were obliged to drop points at Kingsmeadow despite scoring one goal. As a result, the team is actually holding the eighth spot with 6 points won against Leicester City and Manchester City. However, the team lost three games following those two wins and these losses were against West Ham, Everton and lately Chelsea. Aston Villa will have to spot their mistakes and what didn’t go well for them in these last few matches and aim at addressing these issues in order to get back to their winning ways against Liverpool and then against Reading.

In this tactical analysis article, we will therefore focus on Chelsea’s strengths, attacking tactics and how they were able to explore their opponent’s defensive weaknesses while exploring what Aston Villa failed to do in this match. The analysis will contain two parts plus the lineups section.

Aston Villa’s head coach, Carla Ward, started this match according to the 4-1-4-1 formation with Anna Leat as a goalkeeper, Sarah Mayling, Anna Patten, Danielle Turner and Mayumi Pacheco in defence, Rachel Corsie just in front of the defensive line, Kenza Dali and Laura Madison Blindkilde Brown as central midfielders, Kirsty Hanson and Alisha Lehmann as wingers while Rachel Daly was the team’s striker. 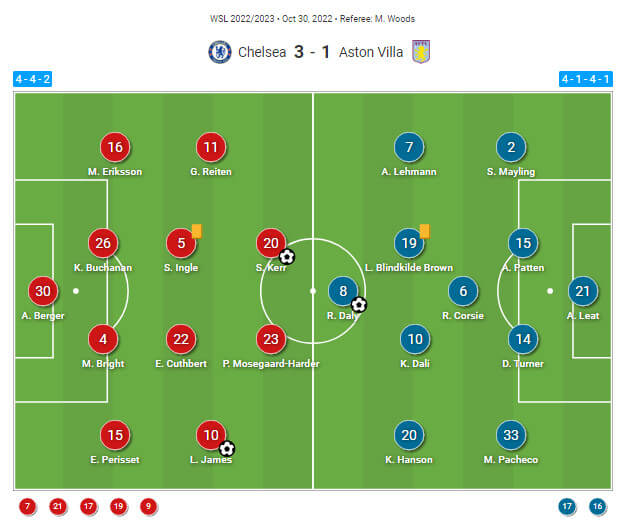 Chelsea started the match with the intention and determination to score as soon as possible and make their mission less complicated. They were successful in alternating their attacks between advancing through the right wing where James and Cuthbert did great work with the ball and on the left wing where Reiten was very dangerous as she was also accompanied by Harder who often dropped to receive the ball in midfield.

Harder alternated between playing as an advanced playmaker and being a second striker near Kerr and at the same time, Kerr did not remain inside the box to wait for the ball and moved a lot, especially towards the right wing. In the following example, we can see one of Chelsea’s first attempts on goal from Reiten after she received a pass from Harder, advanced and exploited the space left by Harder while being able to shoot quickly but with power and precision. Unfortunately for her, Leat was able to deviate the ball with difficulty. 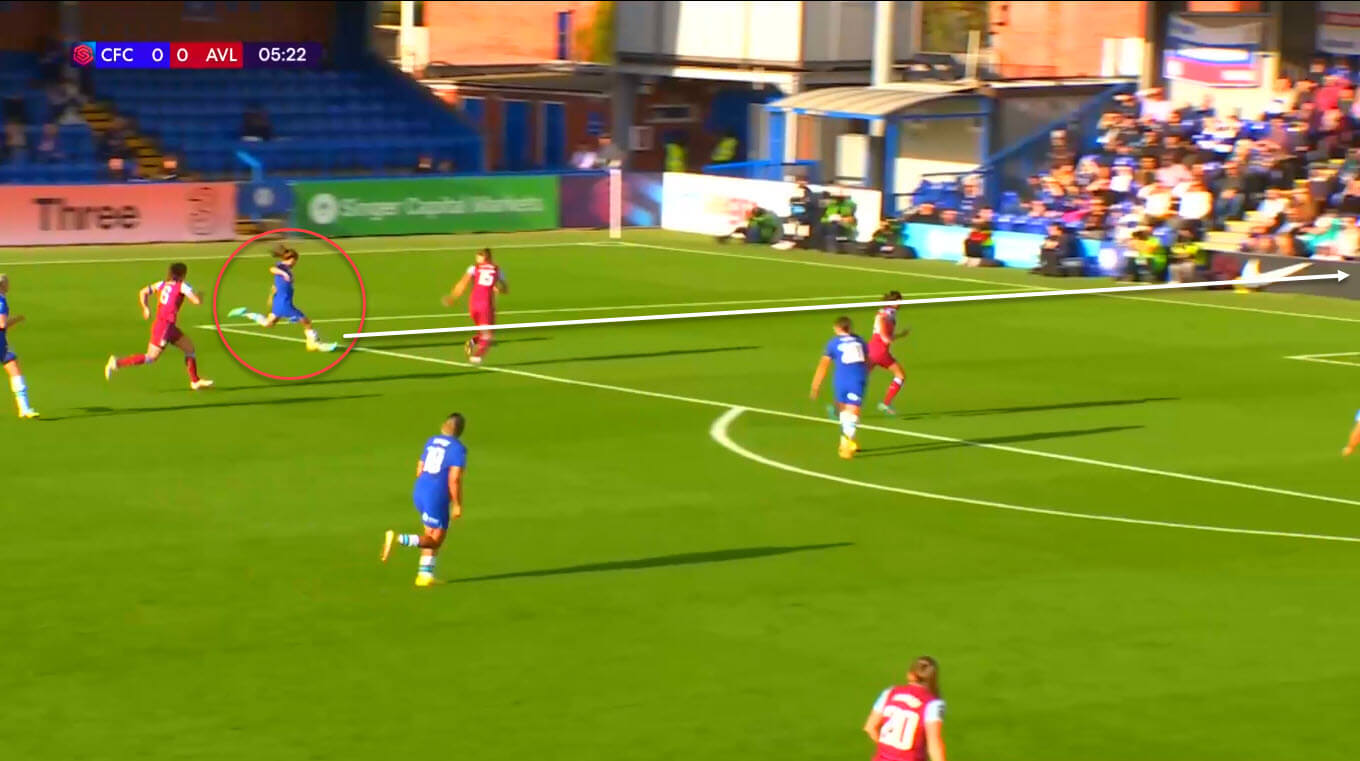 James’ impact during this game was very obvious even before scoring goals. In fact, she was the player who created the biggest danger to Aston Villa’s defence thanks to her successful penetrations using her great physical skills. This helped Chelsea create numerous opportunities from the right wing and cross a lot from that side too. The following graphic just shows how efficient James was in this match in terms of crosses, ball progression and successful dribbles. 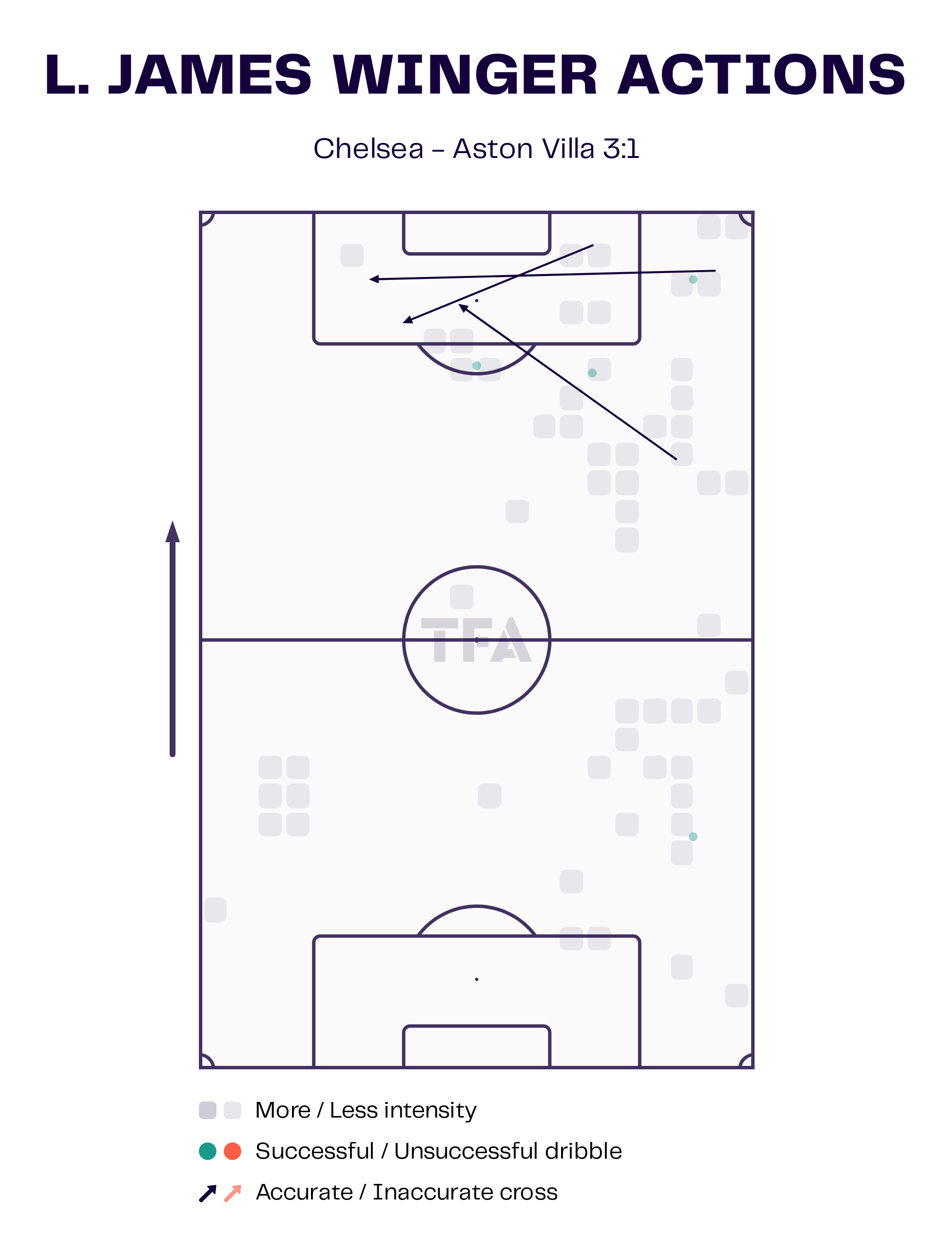 In fact, James represented the key to this game from an attacking perspective as she scored the team’s first goal in a difficult situation. She received the ball from Reiten at the edge of the box and was able to advance and shoot towards the opposite angle using her left foot despite being marked tightly. Such efficiency confirms this player’s quality and will certainly make Hayes even more aware of how useful James can be inside the final third if used properly. 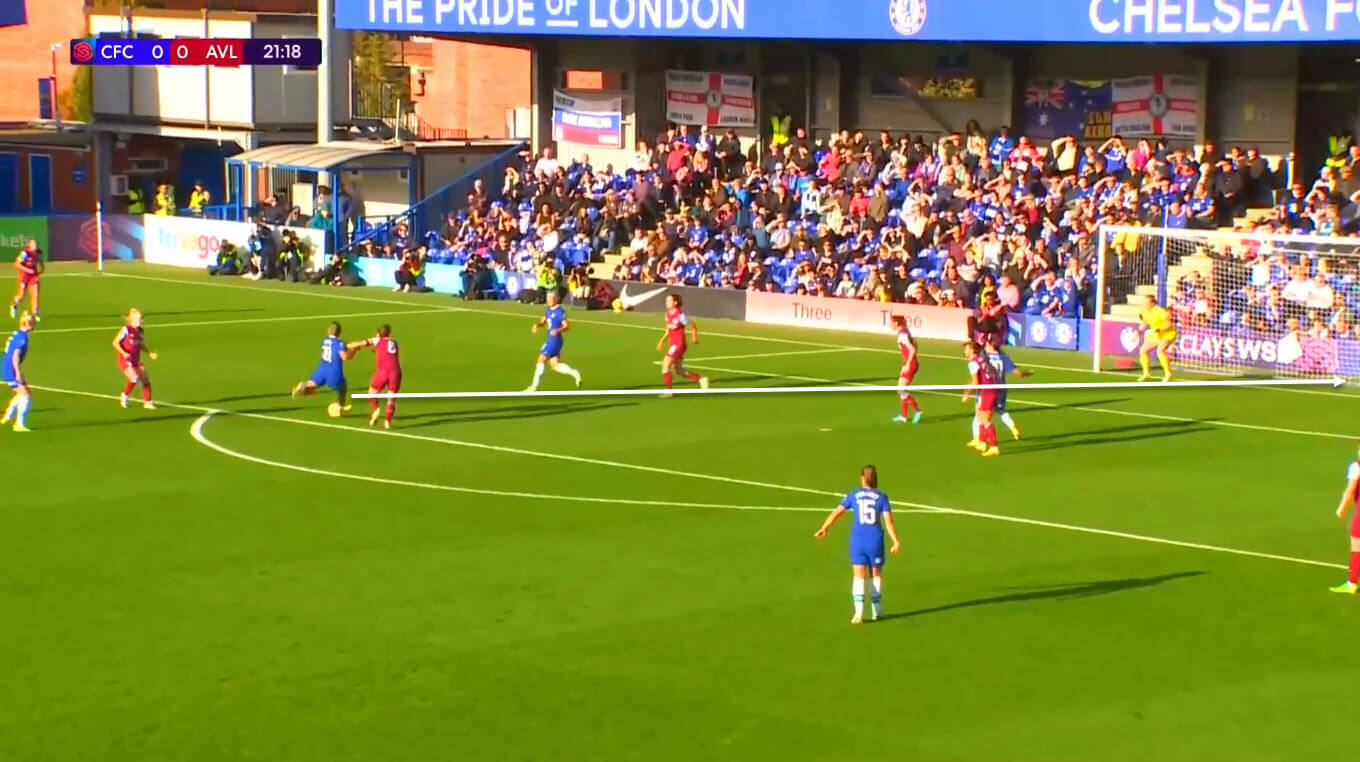 At the start of the second half, Chelsea were able to add a second goal following a well-played counterattack that started with Buchanan who provided a pass to Harder. Then, Harder confirmed once again her free movement in midfield and her acting as an advanced playmaker since she advanced with the ball from her team’s own half and until the edge of the box before providing an assist to James. The latter however wasn’t able to shoot directly because she had a defender preventing her from shooting. She excluded her marker with a quick and accurate dribble and shot the ball with power towards the top left corner. 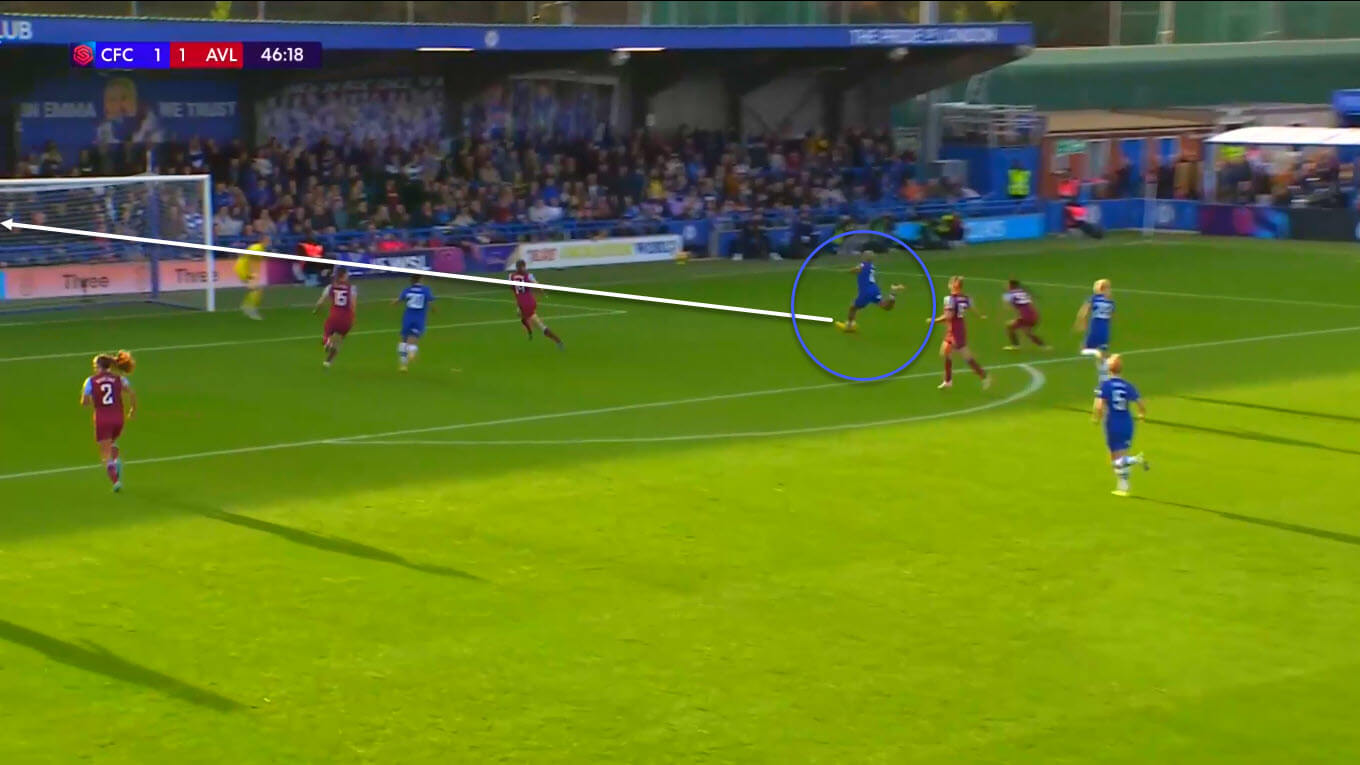 James was also at the heart of Chelsea’s third goal as she was the player who intercepted Corsie’s wrong pass and anticipated Aston Villa’s defender in order to quickly pass it to Kerr who was in a suitable scoring position and was, therefore, able to score a goal exploiting Aston Villa’s lack of concentration in this action. 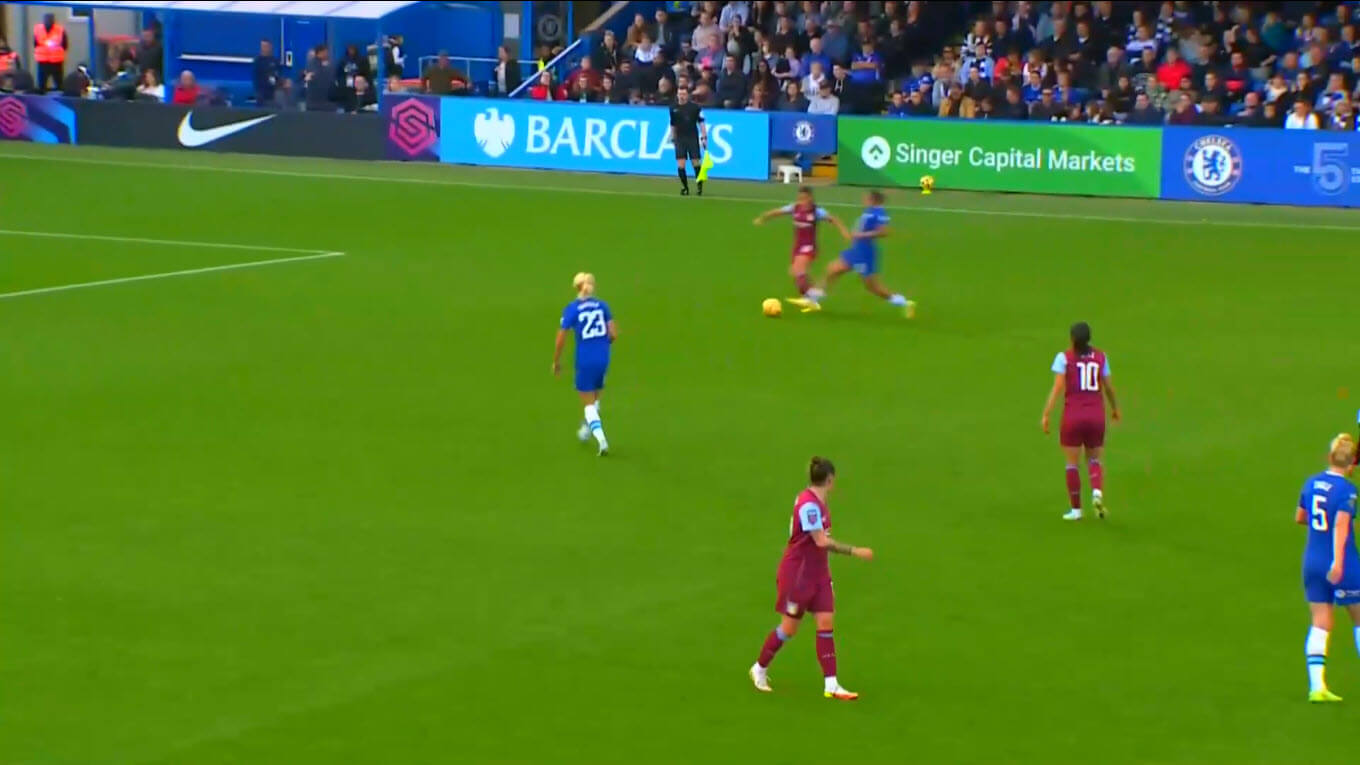 In fact, Aston Villa were punished for their defensive mistakes and overall, their defensive performance could have been better especially when marking Kerr and James. Ward should have instructed her players to always double-mark a player like James to make sure she doesn’t find spaces inside the box. Moreover, Kerr and Reiten were not marked in the required way as they found numerous shooting opportunities and could have scored more goals. The team should therefore improve their defensive resistance against such teams with talented and physical attacking players in order to not concede three or more goals per match.

At the same time, working on the build-up from the back seems necessary for Aston Villa as the team often commits mistakes in this phase and such errors usually lead to conceding dangerous opportunities. Moreover, it is not okay to have 43.3% of possession while knowing that as long as Chelsea have possession, Aston Villa will be in danger due to their inability to defend very well throughout the match. In fact, it is true that having equal possession time with Chelsea is something complicated. Yet, Aston Villa could have had more possession if they made fewer passing mistakes, especially in their own half. These errors can make Aston Villa better if they focus on correcting what they did wrong and enhancing what they did well.

Speaking of positives, Aston Villa’s sole goal of the match was excellent and requires our attention as it shows the excellent finishing skills of Daly once again this season as the player was outstanding in terms of finishing at the start of the season. The action started with penetration from Lehmann before waiting for Mayling’s arrival and advancement on the same wing before providing an excellent assist to Daly who anticipated the pass in addition to anticipating her direct marker by putting her body first and touching the ball before her marker, putting it inside the net. 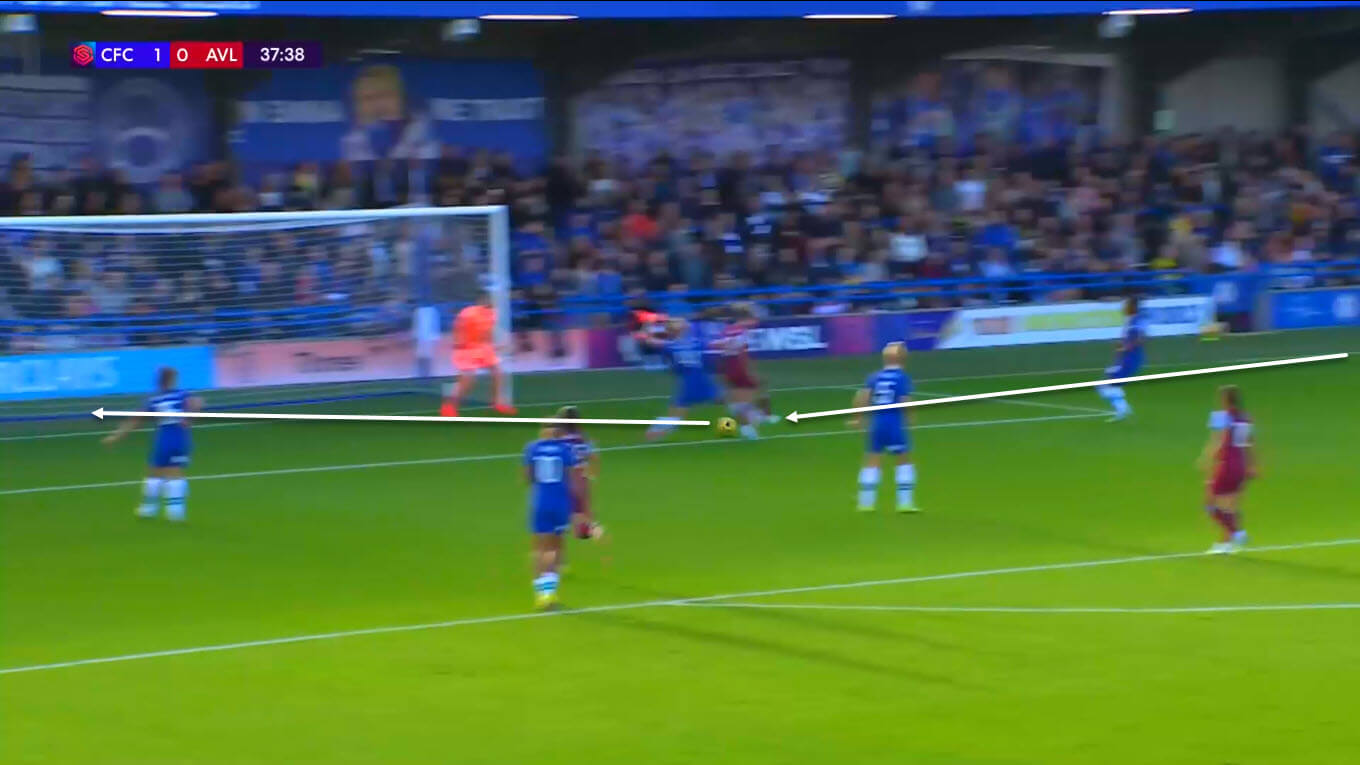 Chelsea succeeded in winning a tricky match that could have been more complicated for the team if it was approached in a less determined and direct way. Chelsea have not only won three points but also the confidence of several players in their abilities and especially James, Ingle, Cuthbert, Buchanan who needed such performances to further believe in their abilities and perform at their best. With such performances, Chelsea promises to play even better football in the upcoming games and can progress even further from an attacking perspective from match to match.

On the other side, Aston Villa will need to analyse their last few losses and try to fix their defensive organisation and especially their marking issues in order to prevent conceding numerous goals per match. At the same time, varying the attacking plans and systems will be fruitful in the near future as the team’s plans are becoming more predictable with each match. 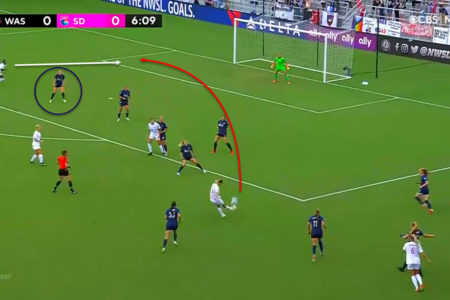