When Woking faced Watford in the FA Cup, it was definitely a David and Goliath battle considering the difference between the teams. Despite the huge gap between them, Woking’s performance was quite good and only two mistakes decided the game. However, Watford showed really interesting patterns in attacking phases, as this tactical analysis will show using statistics.

Dominance from the beginning

There were some changes in Watford’s strategy with Javi Gracia giving some rest to key players such as Troy Deeney, Roberto Pereyra, former Barcelona product Gerard Deulofeu and Etienne Capoue. This successfully provided an opportunity to youngsters like Isaac Success to gain some experience. 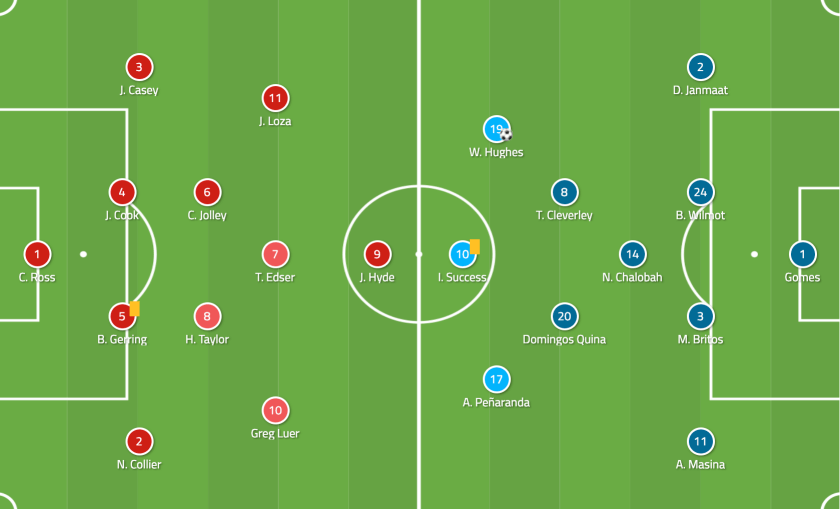 More importantly, there were some tweaks to the formation too. Watford opted for a three-man midfield while pushing the wingers forward. Thus instead of the customary 4-4-2, they employed a 4-3-3. The natural intention was to play in a more possession-based style in anticipation of Woking playing defensively. Watford’s subsequent dominance came as little surprise. In the 16th minute, for example, they had 67% possession.

In this set-up, both wingers stayed narrow which gave space for the full-backs to act next to the sideline. Will Hughes and Adalberto Penaranda were also tasked with frequent dropping movements. This applied especially to Hughes, who appeared in deeper areas more often as the pass map shows.

As you see, between Watford players there was a good connection which Woking lacked.

Moreover, Watford were able to constantly find and create space through combinations or manipulating the opponent’s lines. As a result, they were able to make Woking’s defence vulnerable.

In this analysis, I am going to show some instances where Watford found ways through Woking’s defensive structure. Below is a perfect example of pulling the opposition defence out, then penetrating the space behind them.

When Penaranda receives the ball the nearby opponents rush to him since it attracts the press. Then it forces Watford backwards, but it has a positive effect because it pulls Woking players out of position. 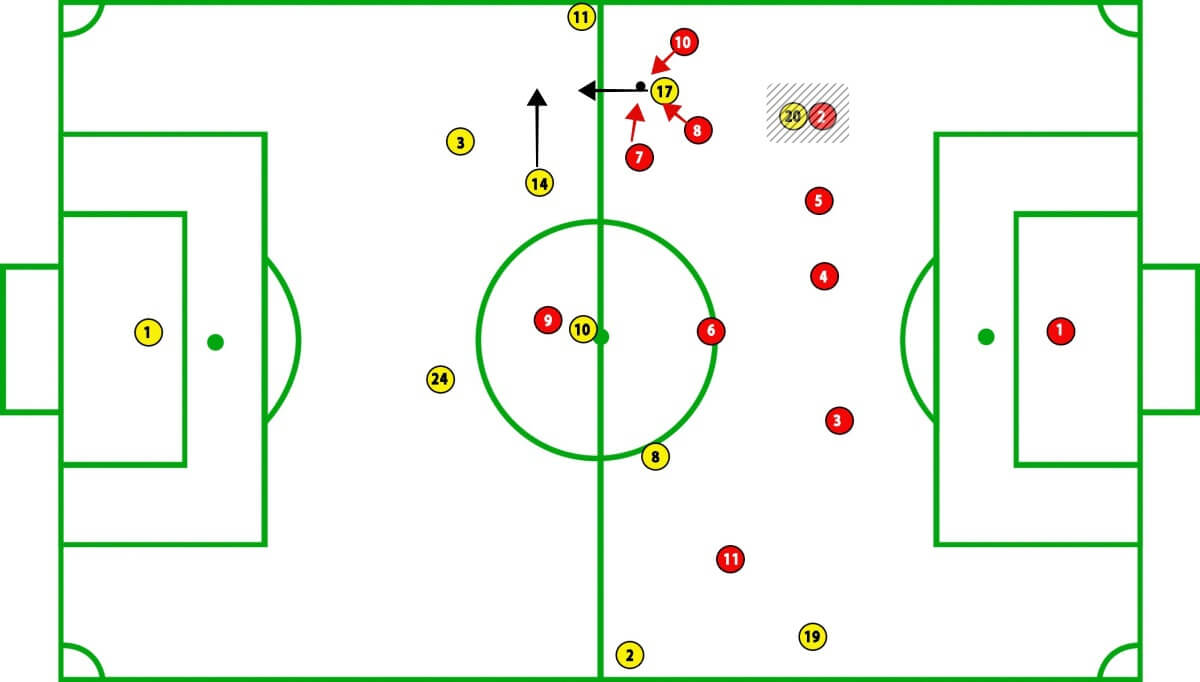 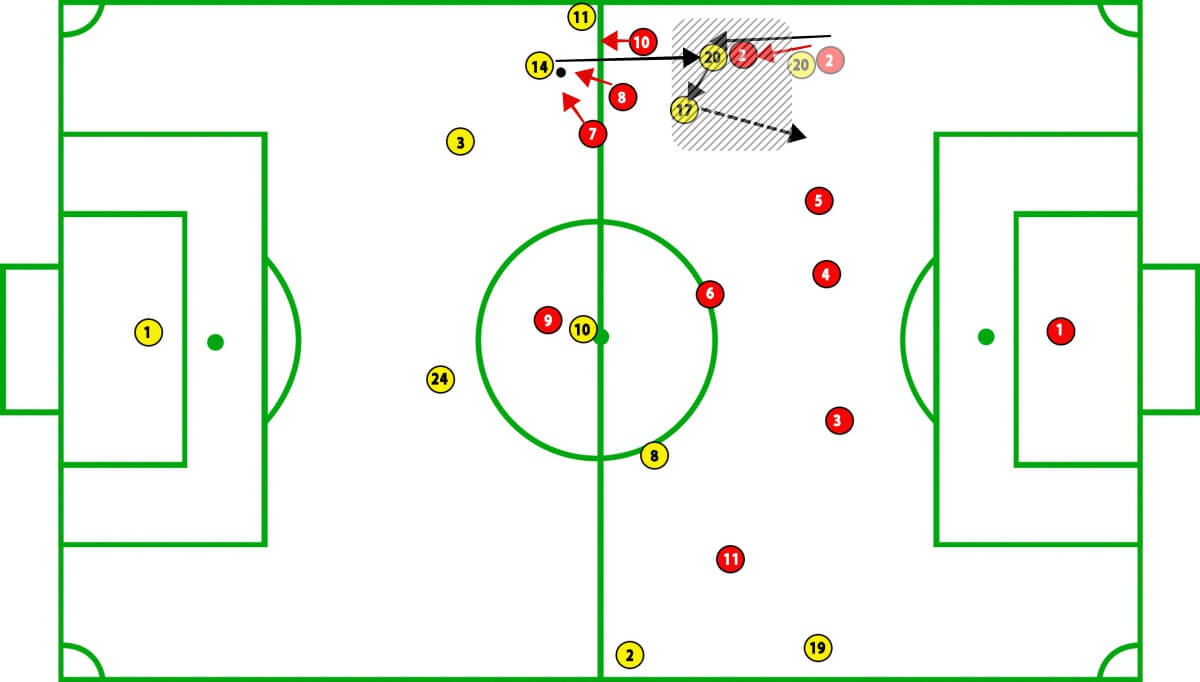 It creates a space behind them where Quina arrives to receive a pass from Nathaniel Chalobah. He quickly lays it off towards Penaranda who now has open space ahead of him, so he can turn towards goal.

There was also an occasion where Watford created space in Woking’s last line. After a switch of play, Watford create an overload on the right side which makes a breakthrough for the guests. The opposition winger quickly closes down Janmaat, so he has to pass back to Hughes. 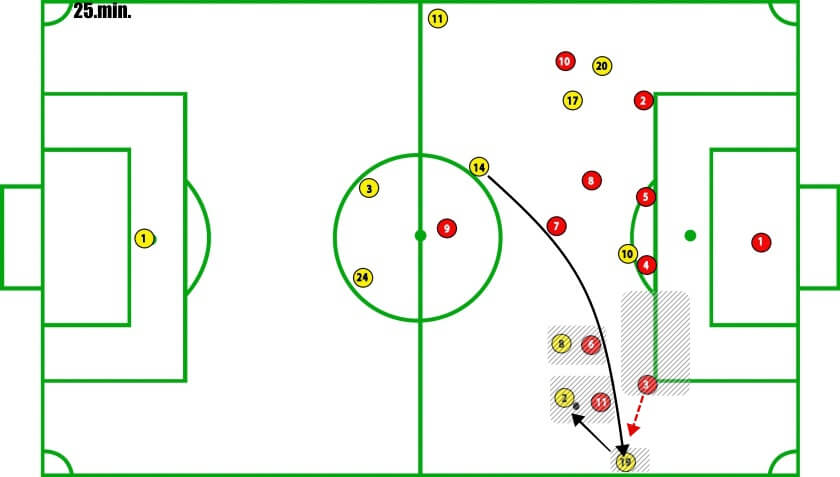 This pulls the full-back out of his initial position. Subsequently, the edge of the box becomes open which allows Janmaat to run in and drag his marker away. Meanwhile Success arrives to offer a central option for Hughes. Immediately, he lays it off towards former Manchester United midfielder Tom Cleverley, who runs diagonally towards goal. 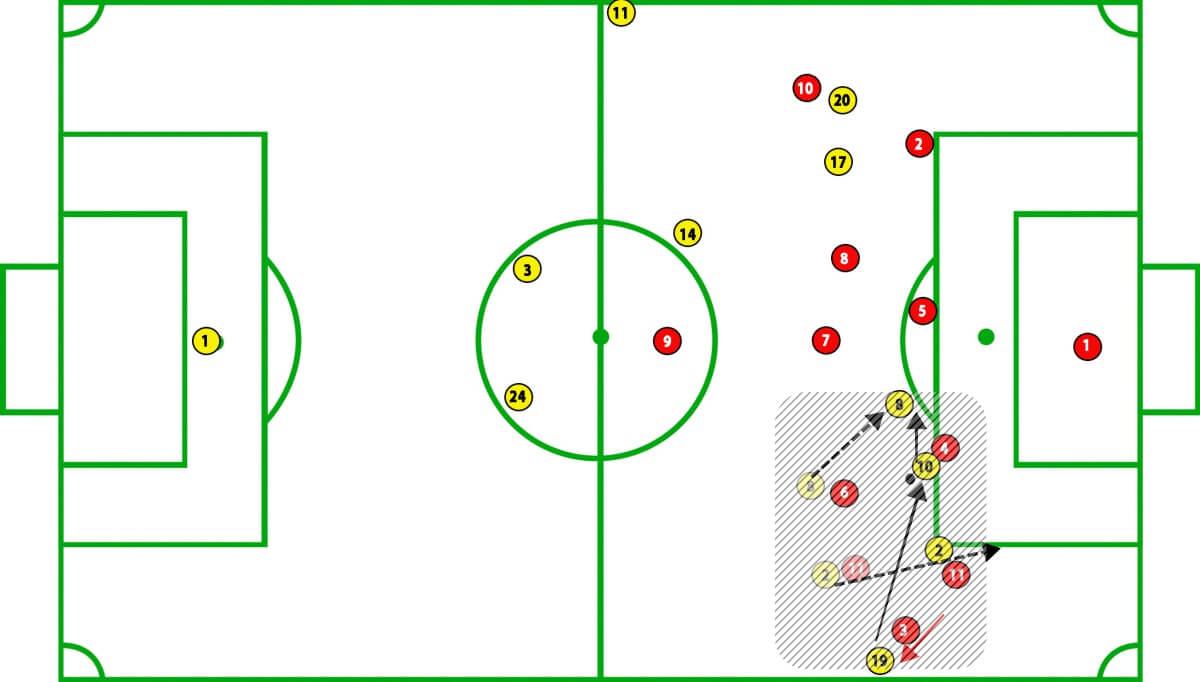 There was a time when everyone positioned at least one player next to one of the posts at corners in order to protect the goal. However, in recent years, another approach has emerged – alongside the different defending styles – which does not demand players protect the goal. The big debate is over positioning players on the post or not.

The main difference between the two approaches is the aim. The first aims to prevent goals from headers or shots, whilst the second tries to avoid attempts themselves. Why does this matter in our context? Because the first goal came from a corner. Now we will seek the answer to the questions of how and why.

At lower levels, teams often man-mark at corners since it is easier to learn than the mixed system or the pure zonal defence. Thus Woking also employed a man-marking system. In addition they used not one but two players with the specific duty of protecting the goal.

Obviously, this reduced the players who actually defended in the box, leaving a numerical balance around the penalty spot. Considering that Woking used a man-marking system – which can be highly vulnerable – and two players on the goal line, there was a high chance of conceding at least once.

Before the goal, you see the same set-up from Woking. Two players are on the posts, with the same number of players from both sides around the penalty spot. However, two Watford players stayed outside the box in order to avoid strict marking and remain available for shooting opportunities. 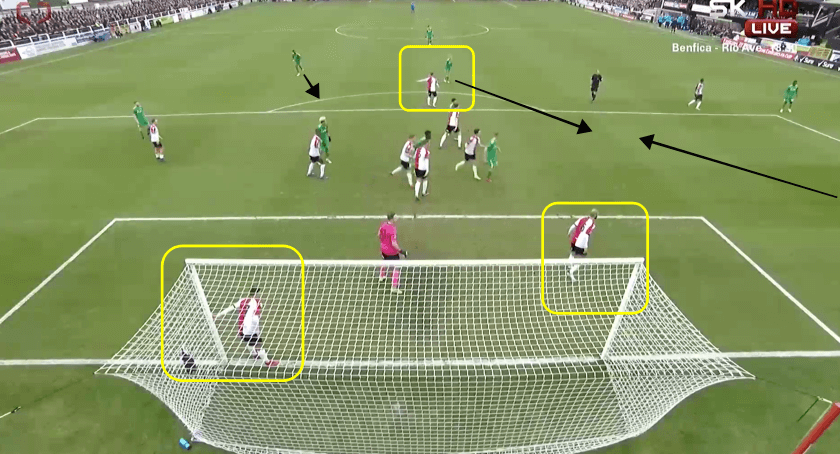 The lone Woking player had to choose which opponent to follow. Unfortunately, he chose the far-sided one, leaving Hughes completely free to score. 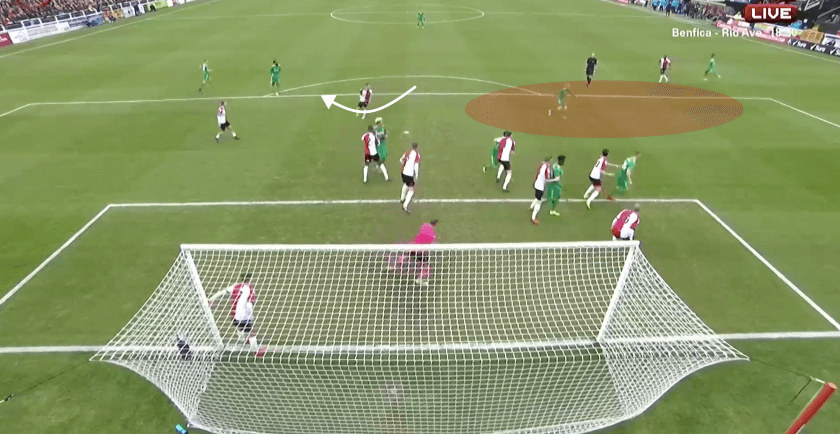 After the break, Woking became more aggressive in their pressing phase with tighter man-marking. It generated a more difficult environment for Watford to progress.

Watford’s progression was not completely cut off though. They found ways to build from deep, like more contributions from the centre-backs to create better chances. 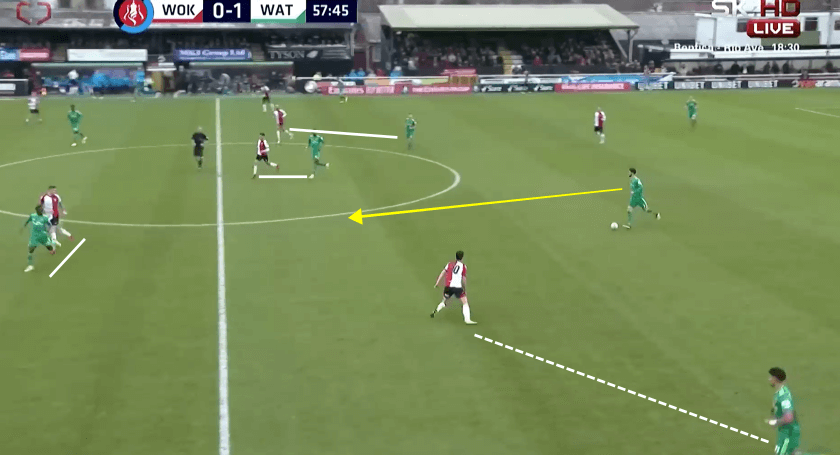 Watford’s victory was solid on paper but Woking made a good job of making it harder, especially in the second half with the improved pressing system. Considering that the home side is a sixth-tier team it makes even bigger achievement.

However, the dominance of Watford was undeniable. Just looking at the xG ratio, Watford usually have 1.23, but this time they registered 2.5. From their perspective, the youngsters’ performances were quite decent. At a team level, they showed some interesting patterns.