On Saturday, in an evenly contested match, Italy and Germany drew their first game in this season’s UEFA Nations League.

Germany came into the match in good form. Since Hansi Flick replaced Joachim Loew last summer the team have remained unbeaten winning eight and drawing one.

In a match that will have raised more questions than answers, this tactical analysis will examine the key tactics set by Roberto Mancini and Hansi Flick and the issues they will need to address in the future. 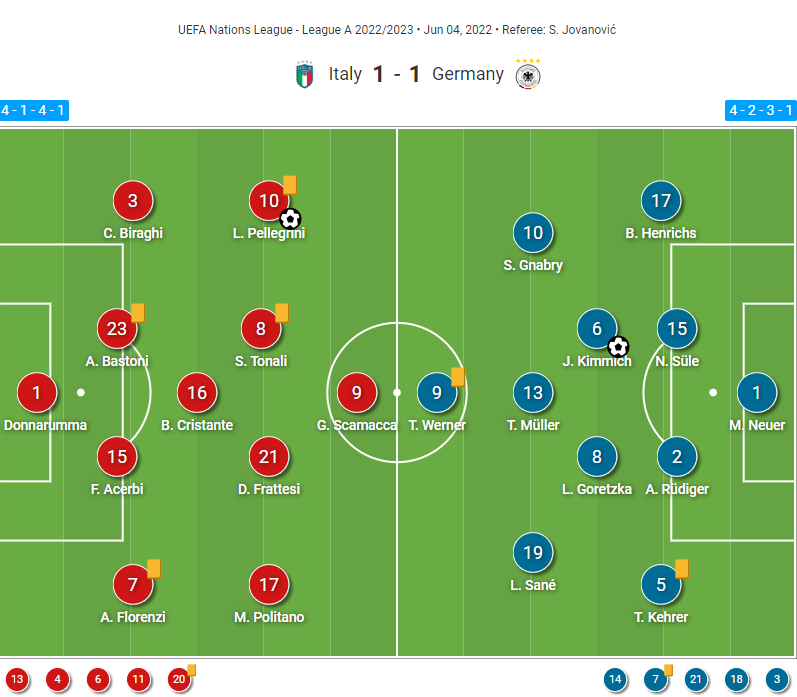 This was a new-look Italy side as Roberto Mancini decided to mix things up after Italy’s 3-0 defeat by Argentina in the Finalissima. Goalkeeper Gianluigi Donnarumma was the only player to keep his place in the starting eleven.

Mancini set the team up in their accustomed 4-3-3 formation. Out of possession, their shape varied between a 4-4-2 and 4-1-4-1 keeping a narrow and compact medium block as Germany looked to build their attacks by retaining possession.

This allowed Italy to compress the space between the lines centrally and force Germany’s play into the wide areas. 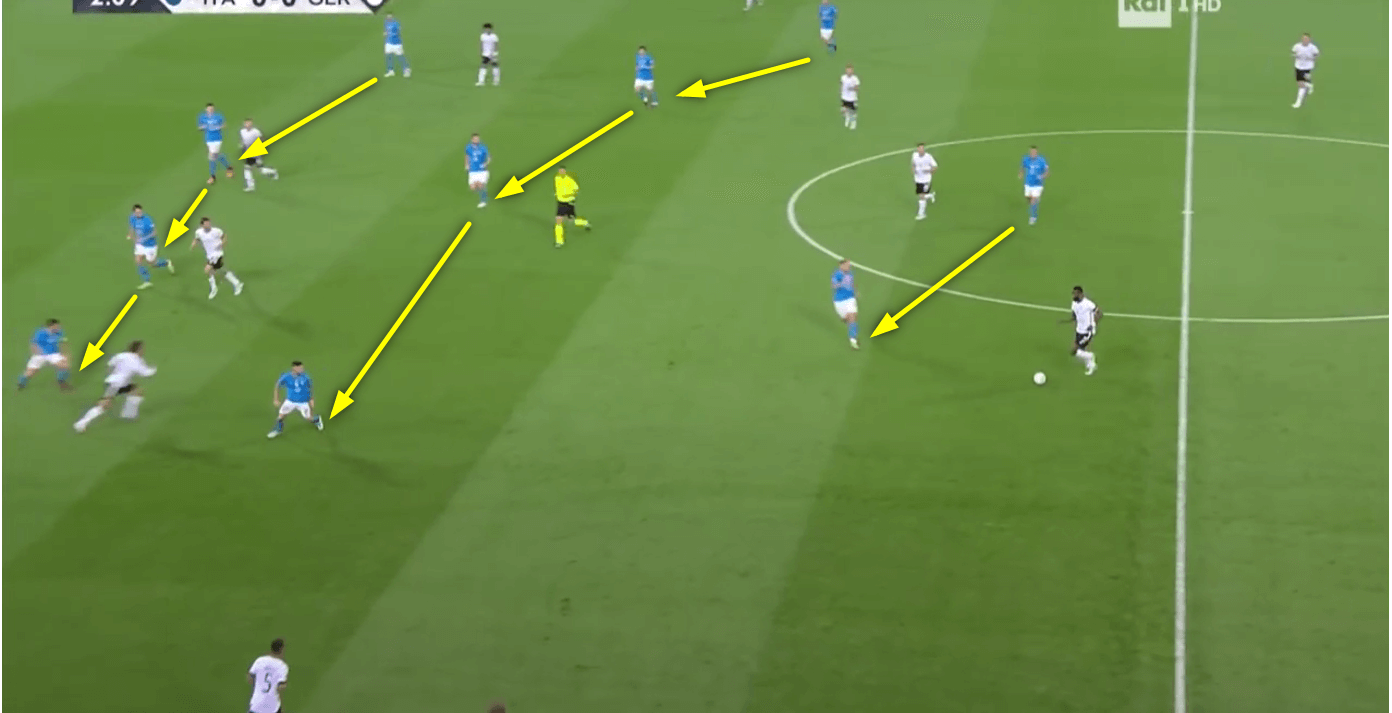 With Germany holding 67% possession throughout the match, this left Italy with only 33%. The Italians seemed intent on allowing Germany to have the ball and only pressed them positionally in certain areas of the pitch. Once the play was forced into a specific area, that player would then retreat into position.

Hansi Flick approached the game with his usual 4-2-3-1 formation and the same tactical approach. Control the game through possession, play with verticality and look to create overloads in the attacking third of the pitch.

He made several changes to his starting line-up. Bayern Munich midfielder Joshua Kimmich and Leon Goretzka returned to play as the double pivot and Serge Gnabry replaced Kai Havertz in the attacking trio behind Timo Werner.

Germany looked to win the ball high up the pitch and maintained their 4-2-3-1 shape whilst doing so. The tactics behind this were to force Italy into aimless long balls to relieve the pressure and concede possession, allowing Germany’s back four to play high up the pitch. 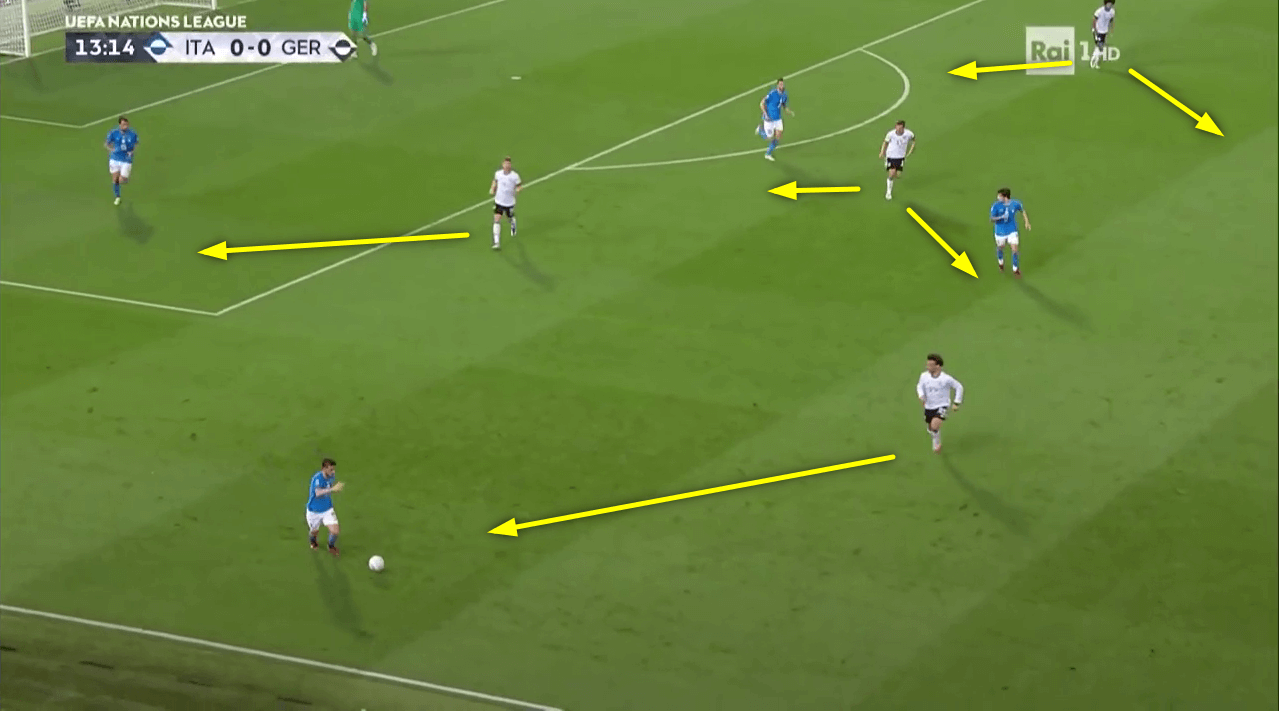 During possession, Germany tried to get as many players across each zone in the attacking third as possible. Both Serge Gnabry and Leroy sane would come inside and play through the half-spaces and both full-backs pushed high and wide providing width and an outlet out wide, as you can see below. 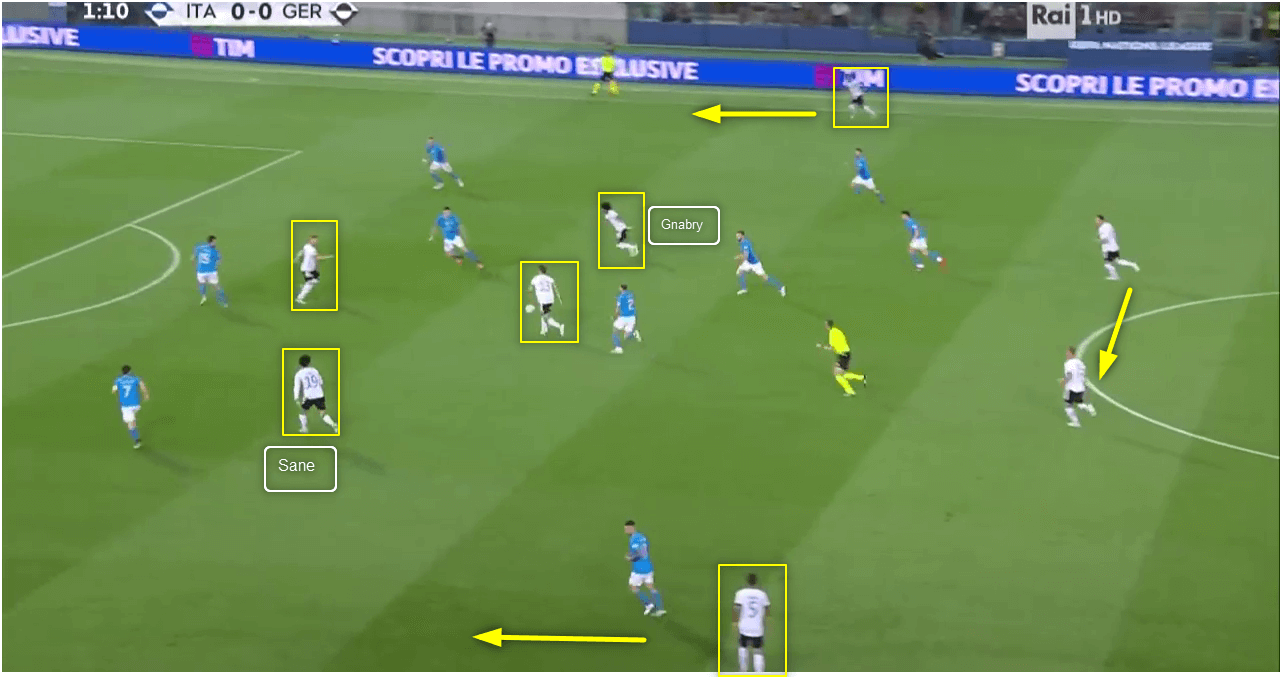 Attacking Down the Flanks

When Italy gained possession of the ball, their biggest attacking threat came from out wide. They focused on exploiting the space that Germany’s full-backs Benjamin Henrichs and Thilo Kehrer vacated when they were looking to support their attack.

AS Roma midfielder Lorenzo Pellegrini and Internazionale‘sMatteo Politano are the two players who started the game playing out wide. Part of Roberto Mancini’s tactics was for Italy to offer two different variants of attacking play in these areas.

Pellegrini is the type of player who likes the ball played to him so he can create. This season, he has averaged 5.31 shot-creating actions per 90 minutes and has an expected assist of 0.24 per 90 minutes, both of which are amongst the best in Serie A and above average for Europe’s top five leagues.

He is particularly good at receiving the ball in good areas and his understanding with Cristiano Biraghi in this game was causing problems for Germany down their side.

As Pellegrini is good at creating, Germany were instructed to close the space in front of him immediately. However, Biraghi would provide both underlapping and overlapping runs as he looked to go beyond the play. 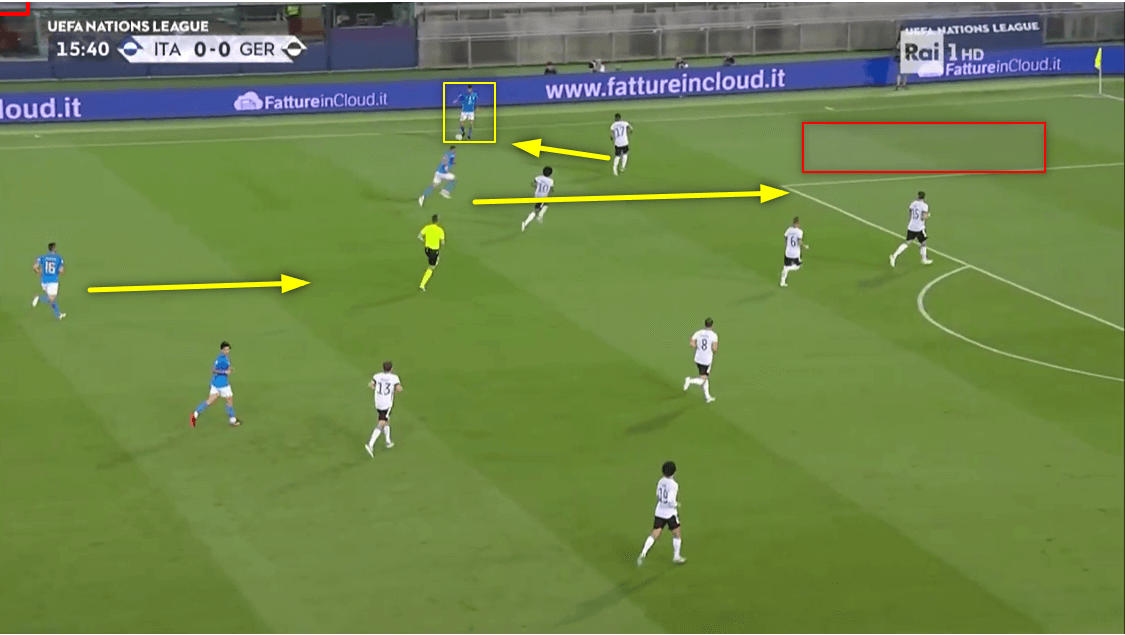 An example of this is in the image above. As Pellegrini receives the ball, Biraghi runs through the half-space attacking the space behind Germany’s back four. What’s good about this pattern of play is how it provides Pellegrini with two options. He can play the ball into space for Biraghi to run onto or he can carry the ball and attack the space inside that Gnabry will vacate as he attempts to track Biraghi’s run

On the right-hand side, Italy’s attacking play was different. As Lorenzo Pellegrini would drop inside and look to play in between the lines on the left Matteo Politano would hold the width on the right. 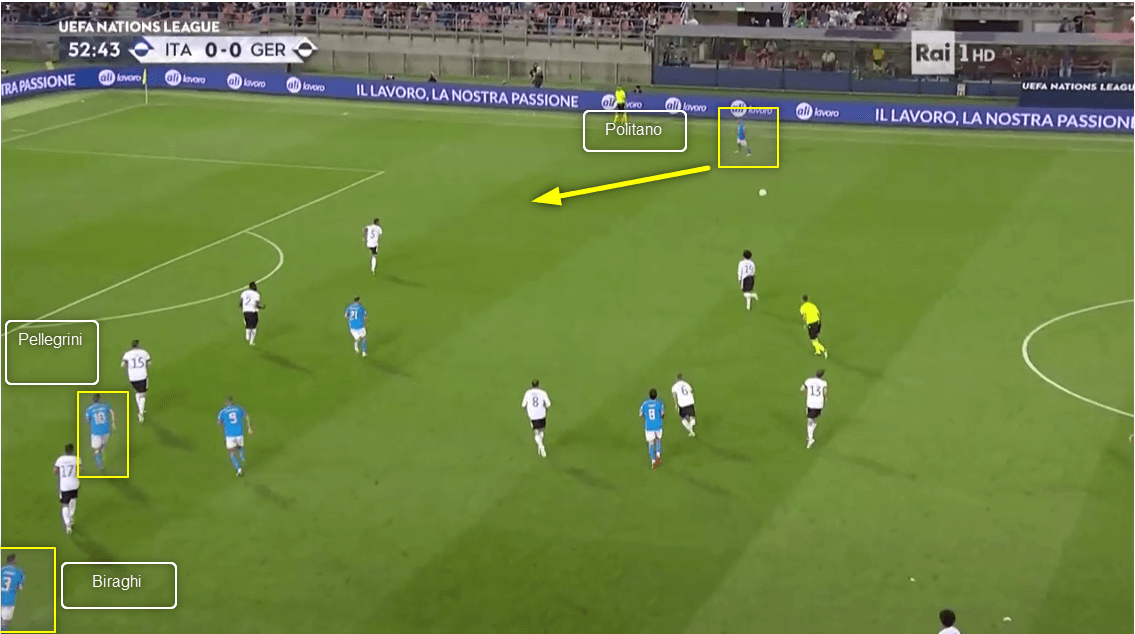 When in possession, Matteo Politano offers a different type of creativity. He will look to carry the ball forward more and attack Germany’s defence. This season he has averaged 9.20 progressive carries per 90 minutes in Serie A. When he wasn’t, he would support Gianluca Scamacca in the penalty area.

Overall, in this match Italy’s positional attacking zones read like this:

During the build-up phase, Germany made it exceedingly difficult for Italy to press high. Joshua Kimmich and Leon Goretzka’s rotation to join the build-up was causing issues for Italy’s central midfield.

Kimmich was the player who would mostly drop between the centre backs as Germany look to make the pitch as big as possible.

Look here, as Manuel Neuer holds possession, Italy are not pressing the goalkeeper but are man to man marking on all the viable passing options that surround him. As Goretzka drops in alongside Kimmich which draws Sandro Tonali towards him when Neuer plays a one-two. This frees up Kimmich who then progresses the play further up the pitch. 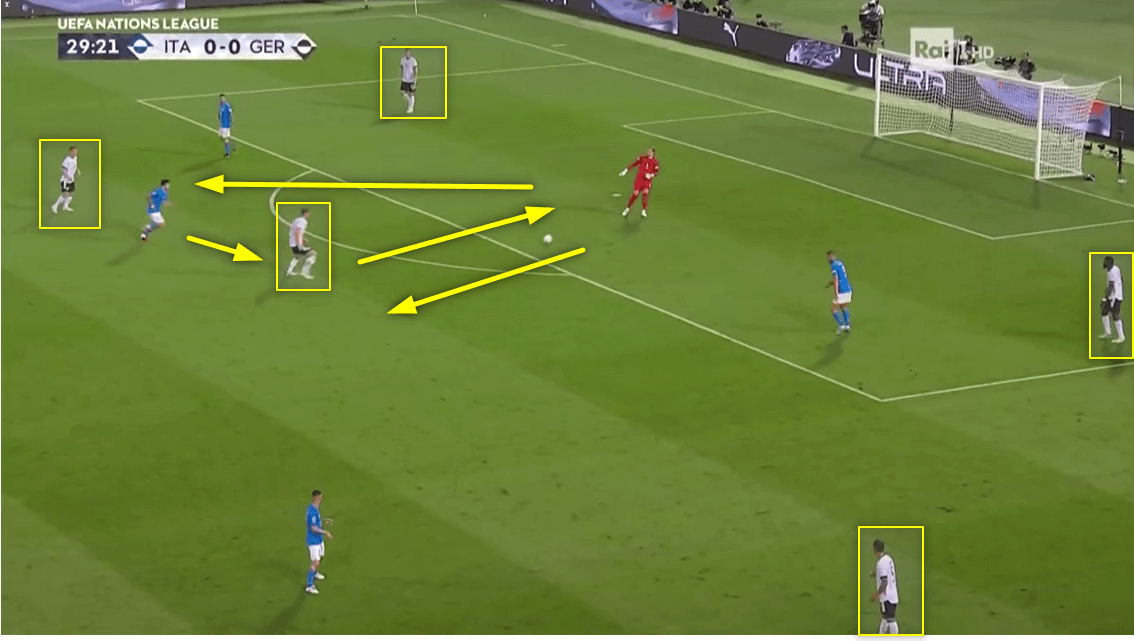 The former world champions kept the ball well as they progressed through the middle third of the pitch, each player having multiple passing options available.

Germany’s possession game and positional play approach provided more fluidity compared to how Italy kept the ball. The Azzuri favoured a direct approach. Hansi Flick’s team looked to play progressively through each third of the pitch, trying to dictate the game by overloading the pitch centrally and creating space out wide.

It was during this phase that Germany would transition from their 4-2-3-1 shape and look to catch Italy out. The team played with a higher defensive line and looked to dictate the play from inside Italy’s half.

You can see how the whole team is almost all in Italy’s half of the pitch and how the team has transitioned into a 3-1-6 shape. Joshua Kimmich dropping between the centre backs allows the full-backs to push high and as the centre backs push further out it makes it difficult for Gianluca Scamacca and Italy’s wide players to press them as Germany progresses further up the pitch.

Antonio Rudiger has four viable options to pass to, which is perfect for breaking Italy’s defensive structure from this stage. 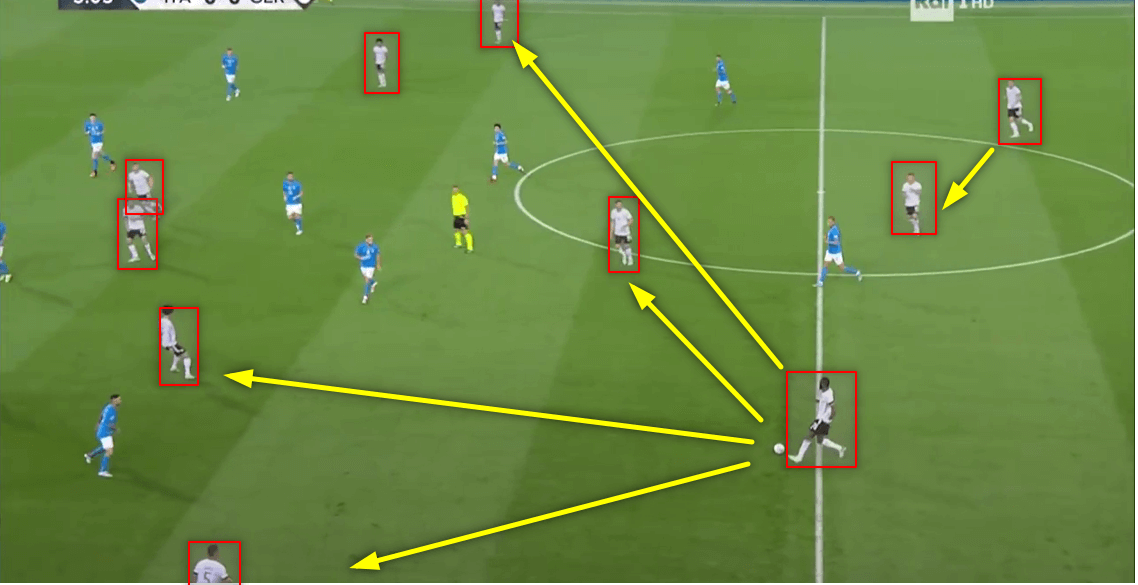 This is the purpose of the 3-1-6 attacking shape and why it’s suitable for Germany’s positional play under Hansi Flick.

It enables Germany to have a player right across each zone of the pitch. The full-backs are occupying the wide channels, the wingers are occupying each of the half-spaces, and they have three players that occupy the centre of the pitch, with no players holding the same vertical or horizontal plane at any stage.

Their play from the defensive third through to the middle third was good and cohesive, but when they entered the final third, their play became disjointed and indecisive.

Hansi Flicks tactics were to overload the pitch centrally and surround Italy’s penalty area. However, When Leroy Sane and Serge Gnabry moved inside the runs were not always best-placed and they made it difficult for the ball carrier to open space with his pass.

It was causing indecision with Germany’s attacking play and causing players to get drawn towards the ball instead of the space.

As Thomas Muller has the ball below, his only pass towards the goal is Timo Werner and given the space, he is running into, it is easy for Italy to stop the attack as they have two players covering one run.

From this point in the play, Sane and Gnabry should be looking to attack the space between the full-backs and the centre backs, as the arrows indicate and Werner should be holding his position, which would occupy the centre backs. 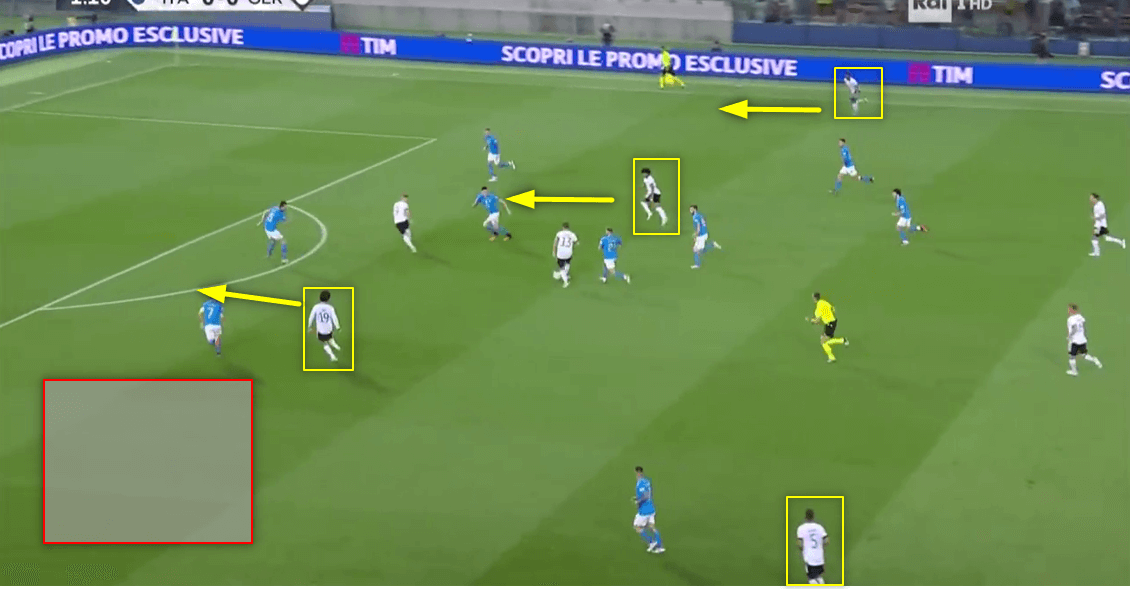 The lack of balance down the left-hand side was also causing issues for Germany as they looked to break into the final third. Kehrer and Sane did not offer the same attacking fluidity that Serge Gnabry and  Benjamin Henrichs or later Jonas Hofmann did.

Although he will be disappointed with how quickly Italy conceded an equaliser, Roberto Mancini will be pleased with the result and performance of this match. The team he selected was inexperienced and has rarely played together for the national team.

Germany will be disappointed that they couldn’t turn their possession into better-attacking opportunities. Flick will come away from this game pleased with how well his team controlled the play in the first half and how well they played up to the final third. However, from this point, there are still a few questions that need answering as he seeks to find the right balance. Not only from how they create chances but who will be the players that deliver in those attacking areas.

This analysis examines the key components of the tactics set by Roberto Mancini and Hansi Flick, and the impact they had on each of their teams.