Krasnodar and Porto clashed in what was set up as a dynamic, energetic matchup between two sides desperate to play Champions League football. Krasnodar couldn’t have hoped for a harder draw in these UEFA Champions League qualifiers, with Porto knocked out in the quarter-finals by eventual winners Liverpool. Krasnodar’s style of play in the Europa League last season had however caught the eye, and Porto seemed well prepared for the task ahead, as I will get onto in this analysis. This tactical analysis will look at the tactical trends in Porto’s 1-0 victory in Russia and explain Porto’s struggles despite a positive result.

Krasnodar showcased their new signings once again, with the surprise inclusion of Marcus Berg, who had little impact on the game. Both teams lined up in largely similar shapes, with Krasnodar fluctuating between a 4-3-3 and the 4-4-1-1 seen below. Porto stuck to a 4-4-2, which on the surface looked as though would be used to combat Krasnodar’s man orientated press, however, Porto’s shape in build-up changed and was extremely interesting. 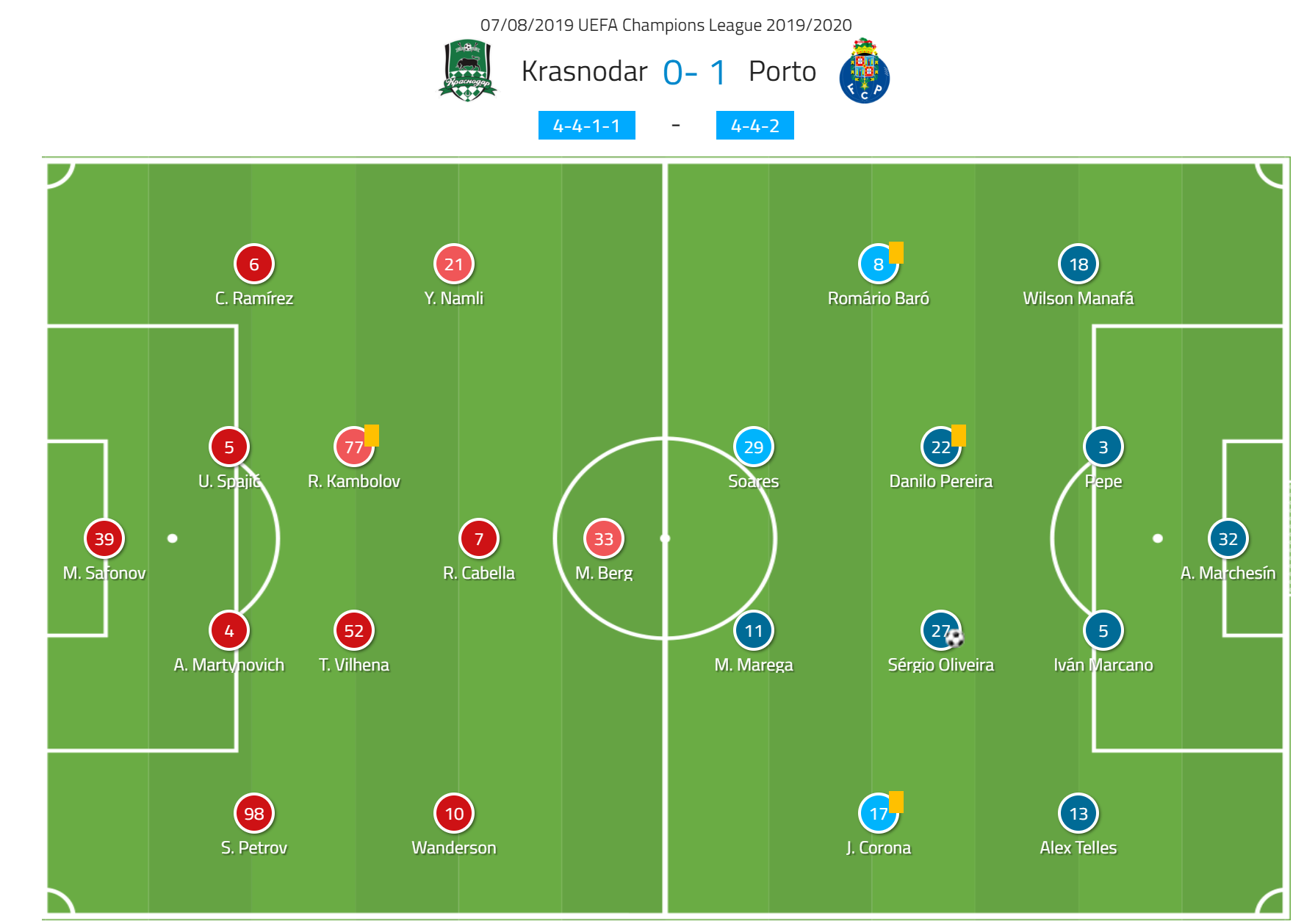 Krasnodar play with a pretty distinct man orientated press when out of possession, and this is something Porto knew and expected, and adjusted their game plan accordingly.

Below we can see an example of Krasnodar’s man orientated press when Porto fell into their expected shape that’s fairly easy to press. Each player matches up man for man, with the player nearest to the ball carrier marking the ball carrier. The main difference between Porto’s build-up play was the positioning of the full-backs. Here, Porto are in their 4-4-2 shape roughly, with two centre backs across the back and the left full-back dropped deep. This allows for Krasnodar’s winger to press them fairly easily, as we can see below.

In deep build-up phases Porto instead employed this structure mostly, with one of the central midfielders dropping to become a third centre-back. This disrupted Krasnodar’s press initially, as their winger would not continue to step forward to press in a central area as part of a 4-3-3 and Krasnodar’s full-backs also did not back up the press effectively. Below, Porto decide not to play down the line to the extremely high full-backs, and instead start again, seemingly in an attempt to build down the centre. While a defensive midfielder drops deep, one of the wingers drops into the central midfield area, and the full-back then takes the winger’s space.

With the back three seemingly not too interested in playing down the line, Porto looked to play passes between the lines in the central areas as we see here, where Danilo Pereira plays an excellent pass.

At this point, the pitch looks like this below. With Porto overloading the central area and the wide full-backs having acres of space. Krasnodar refuse to match up in a three against Porto’s backline, and Krasnodar’s central midfield players simply man-mark Porto’s central midfielders. 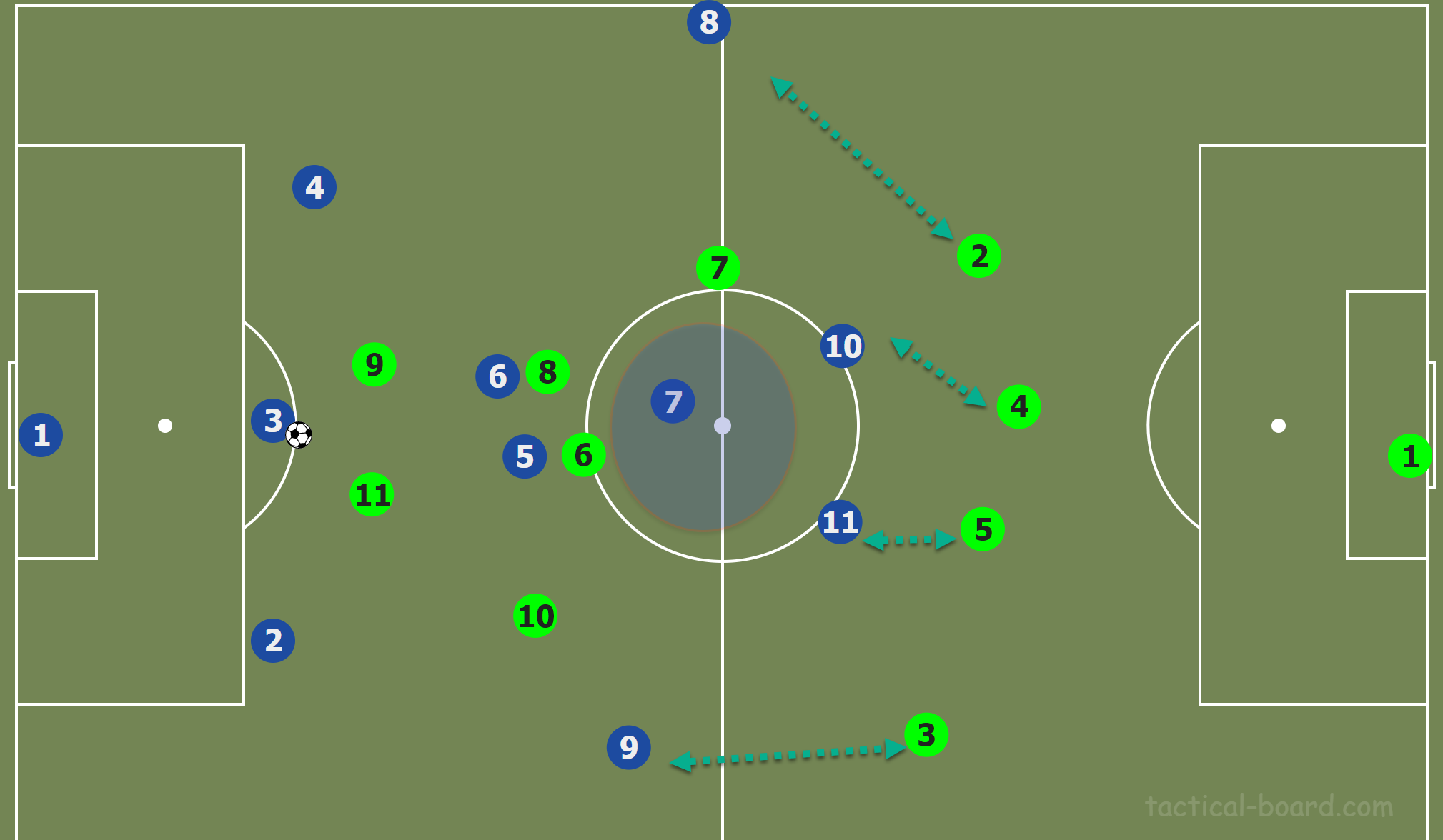 Krasnodar quickly, however, began to become more aggressive off the ball, and were much more successful. The central midfielders became less focused on man-marking Porto and instead began to press a centre back with the strikers. The full-backs also began to move forward, and now mostly man marked the high full-backs. When the full-backs went high the nearest central midfield player would drop into full-back if required. Porto’s quality sometimes allowed them to overcome the press, but Krasnodar were largely successful in terms of pressing.

They were fluid and flexible in their pressing movements, and at many times had to be. Wanderson often chose to step forward and press, while Namli was reluctant to do so, so Cabella took charge and pressed as part of a front three, as illustrated below. Namli is then able to intercept the pass down the line as part of a midfield three.

When allowed time on the ball, Porto still struggled to break Krasnodar down, again largely due to the positioning of the full-backs. We can see below the centre back has no options on the ball, with the two central midfielders covered and the winger and full back invading each other’s space. Porto therefore mostly had to deal with scraps down the wings, where they would usually put a cross into the box.

We can see again in the example below, Porto struggle to play through a set Krasnodar side. The centre back again has little options, and so plays the ball down the line to the full-back. The full-back also has no options and a defender tight on his back, and uses his skill to get behind the defender. This kind of shape isn’t going to allow a team to create many chances by pure individual technical ability, and as it happened for Porto, they didn’t create a great deal of chances.

A key part of Krasnodar’s offensive play in the game was quick switches of play in order to create quick overloads using the full-backs and wingers. Krasnodar’s central midfielders often show for a switch in play, at which point the full-back is triggered to make a run forward. We can see this below with Vilhena showing for and then receiving a pass before passing it onto the onrushing full-back.

We can see in the example below this time the winger showing for the ball, which again triggers the full-back to make their run. The full-backs are not in a high position until they are needed, which makes them extremely difficult to mark.

In this final example below, Petrov arrives so late that they have a free position on the edge of the box, as they have not been tracked by any Porto players. Krasnodar created multiple chances through the use of this strategy, and Remy Cabella really should have given them the lead late on.

All in all, Porto will be happy to come away from Russia with an away goal and a win, while Krasnodar will be disheartened by another late sucker punch blow. Krasnodar lacked their usual offensive tactics and fluidity, something I don’t believe was helped by the absence of Viktor Claesson and the exclusion of talented youngster Shapi Suleymanov. If Krasnodar’s previous European campaign shows anything however, it is that this tie is far from over, and Krasnodar are more than capable of a positive result should they refind their offensive quality.