Marseille hosted Manchester City for their second matchday of the UEFA Champions League group stages. Even though André Villas-Boas’ squad held on for a long time, Pep Guardiola and his troops strolled to a 3-0 victory on the night.

This tactical analysis will dissect both teams’ tactics and show you just how the English side dismantled the French one.

Right from the start, we could see that Marseille were expecting a barrage of attacks coming from the other side. Boas deployed his squad in a 5-3-2 formation that was mostly focused on defending and counter-attacking. There were a total of three changes to the squad that won against Lorien in Ligue 1.

Duje Ćaleta-Car joined the backline together with Jordan Amavi, Leonardo Balerdi, Hiroki Sakai and Álvaro González. In front of them was a midfield three of Boubacar Kamara, Michaël Cuisance and Valentin Rongier.

Up front, the attacking duo of Florian Thauvin and Nemanja Radonjić rounded up the structure. 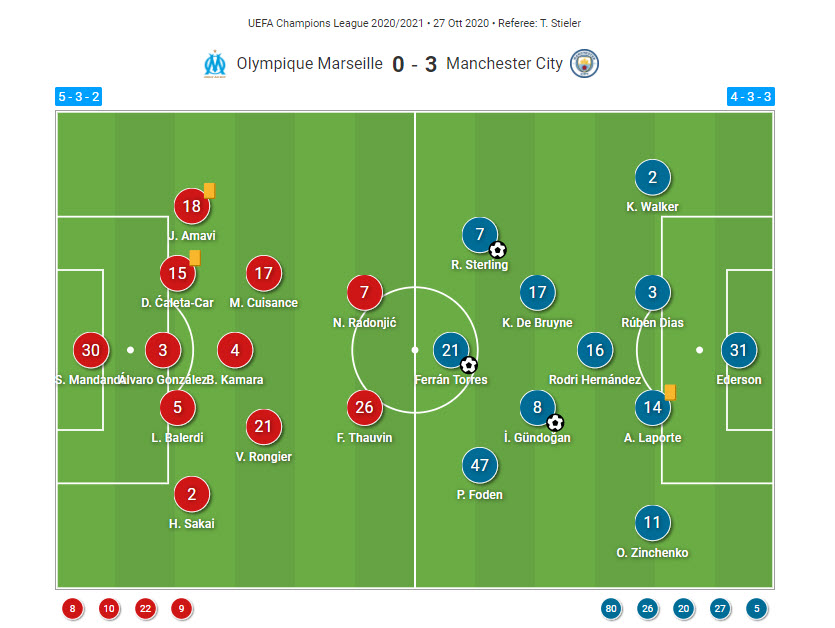 For Manchester City, Guardiola made quite a lot of changes from their game against West Ham. Ederson was, of course, in goal but the defensive line consisted of Aymeric Laporte, Rúben Dias, Kyle Walker and Oleksandr Zinchenko. In front of them, Pep opted for Rodri, Kevin De Bruyne and İlkay Gündoğan.

Finally, in the forward line, Raheem Sterling was on the right, Phil Foden on the left and Ferran Torres down the middle.

Man City were deployed in a 4-3-3 formation.

It doesn’t really come as a big surprise to see that Guardiola’s team was quite flexible in possession. Tracking down the movement of Manchester City’s players is always interesting and often quite innovative. In possession, the Citizens would form their well-known three in the back structure but with varying attacking tactics, depending on the side they chose to penetrate through, as we’ll see later in this tactical analysis.

Usually, Walker would be the one to drop deeper and join the backline with Laporte and Dias. This was most welcome due to Marseille’s 5-3-2 defensive formation that sat in a mid-block for most of the game. 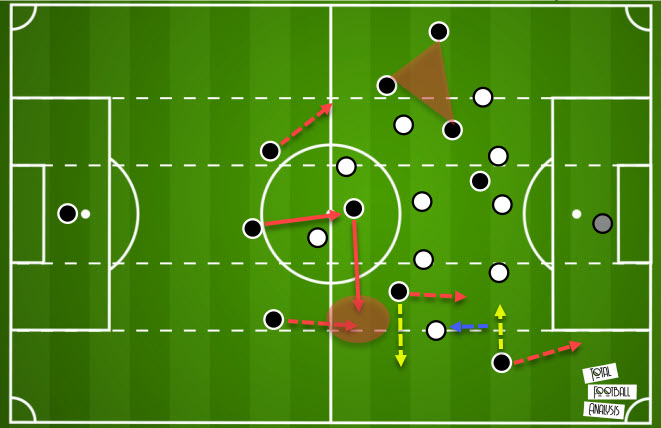 Above, you can see different alternatives to City’s approach. With three players in the back, the guests achieved numerical superiority against the first line of press and would open up the possibility of running into the half-space channels.

One way of progressing the ball was either through the left centre-back or Walker running with the ball. Marseille’s front two would try and track their movement but couldn’t press effectively in a 3v2 situation. Another way was to keep Rodri close and between Marseille’s forwards.

Often, the centre-back duo used him to easily progress the ball as well. The Spaniard would then shift the ball to either flank to start the attack. However, Manchester City had varying approaches depending on the side they chose to attack.

You can that from the initial graph which depicts different relationships and connections they formed. Notice in the example below how that looked like on the pitch.

De Bruyne and Gündoğan acted as Manchester City’s no.8s while Rodri was a no.6. The former two players’ task was to occupy their respective half-spaces and drift wide to aid the build-up when necessary. Notice, however, that the relationship is somewhat different on the left and the right.

On the left side, De Bruyne would often form a triangle with Zinchenko and Foden, aiming to advance through positional play while on the right, Walker would aim to deploy either Gündoğan or Sterling into space. At times, the 8s would swap places but the principles remained mostly the same.

This is because Walker is always dropping into the backline while Zinchenko has a more advanced role. For that reason, there’s a man advantage on the left which can be used to form triangles and rhombuses on the wings. It was also very interesting to note the movement Manchester City used to manipulate the opposition’s block.

Let’s explore one scenario down below. 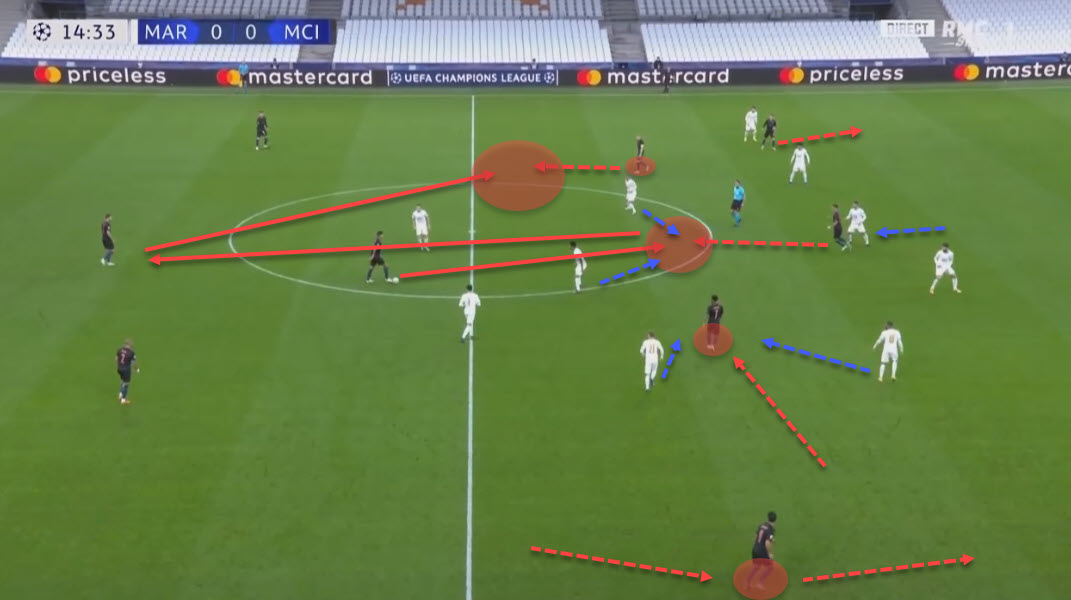 To bypass the congested structure of Marseille, the guests needed to move the pieces around and have quick ball circulation. They made both possible with proper space occupation and movement manipulation. Above, you can see the relationship between the midfielders and the wingers.

If Gündoğan cuts in centrally, Sterling has to keep the width and vice versa. If the midfielder drifts wide to receive from Walker, we’ll see the winger tuck into the half-space, as is the case in the example above. Unless, of course, De Bruyne has also shifted over to that side and has already occupied the said space.

This forces Marseille to tuck inside as well, keeping the attention to the centre to free up the wings. That strategy was pretty common during Pep’s stay at Bayern Munich and is still present in his tactics. Then, Torres drops and attracts more markers towards the middle area and upon receiving the ball from Rodri, he immediately lays it off to the backline. From there, it moves to De Bruyne and quickly towards Foden and Zinchenko.

That way, Manchester City moved the ball rapidly and upon changing sides, Marseille would leave gaps open and runners could exploit it. We also mentioned how Rodri was often used to do the same thing as well. 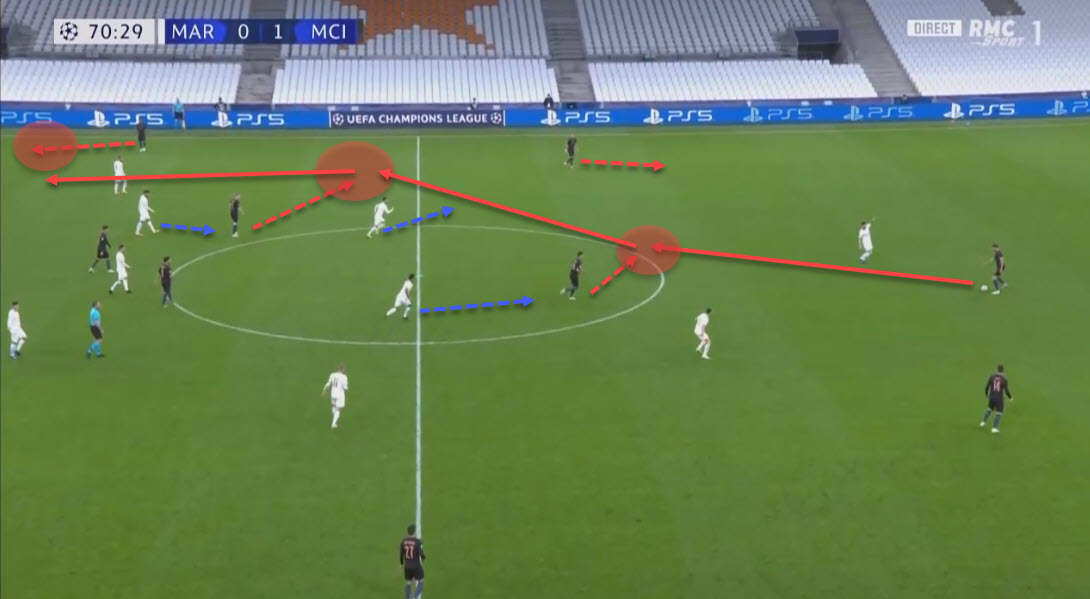 Above, you can see how Manchester City bypass Marseille’s block by inviting pressure from the first line and then using Rodri to advance the play. De Bruyne is now on the right side and he drifts wide to aid the build-up, as we’ve mentioned the 8s often did.

Marseille’s second line was attracted by Walker dropping and suddenly, no one was covering the half-space. Upon receiving the ball, De Bruyne runs with it for a couple of metres and then deploys Sterling into space behind the opposition’s defensive line.

The home side tried their best to direct the play wide and away from the danger area. Their block would move as the ball switched sides. The two forwards put pressure on Man City’s centre-backs while the central of the three midfielders, mostly Kamara, would mark Rodri. When the ball moved wide, the full-backs would move up and press the wingers.

If City didn’t move the ball quick, Marseille were able to plug the holes. However, constant side swaps made it easier for them to access the half-space and send their runners in-behind, especially since the French team’s three-man midfield had issues covering. There were instances when Marseille tried to press high but that was quickly punished or simply didn’t last. 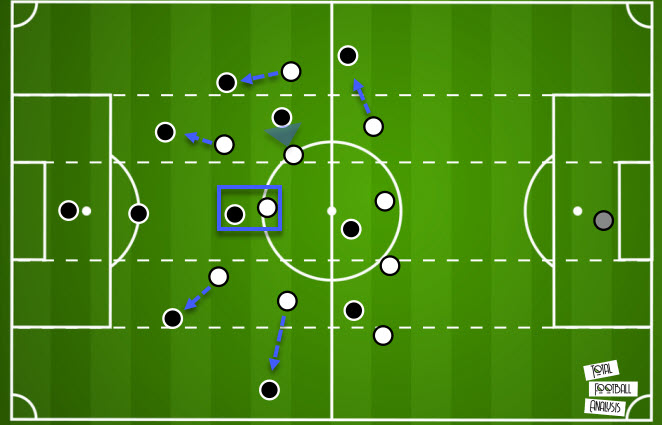 They would often retain their 5-3-2 shape when moving up with the forwards pressing the wide defenders. The pivot had to be marked tightly again so the central defender was free on the ball. Marseille’s aim was more to shut down the passing lanes than it was to press Manchester City into errors.

If De Bruyne and Gündoğan drifted wide, as seen in the graph above, they were picked up by the other two midfielders while the full-back on the right had to press Zinchenko in case he dropped deeper. The remaining four in the back kept tabs on Foden, Sterling and Torres.

Marseille in the build-up vs Manchester City’s pressing tactics

The hosts were unable to do much damage to their guests throughout the 90 minutes and opted instead to yield possession and play through transitions. Still, when in possession, Marseille would try to build-up from the back, keeping a three-man backline and pushing the wide players higher.

This would turn their structure in a variation of a 3-4-3 or a 3-5-2, depending on the situation. Manchester City, on the other hand, deployed a 4-3-3 high press, suffocating the hosts and forcing them into mistakes. 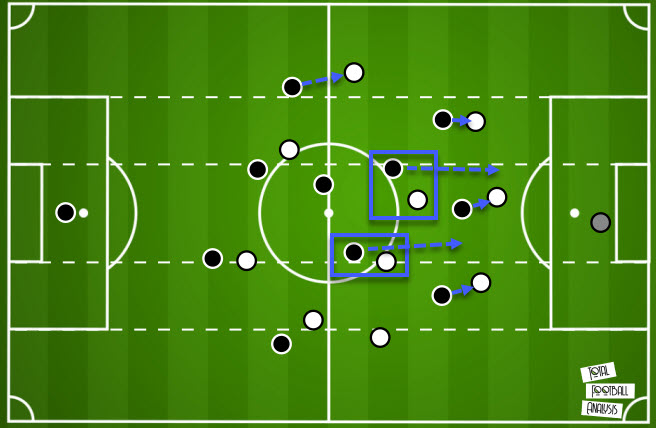 Guardiola had the Citizens in a heavy man-marking scheme with the two wide forwards often rushing the wide defenders and Torres pressing down the middle. Usually, the winger on the far side would stay deeper until the ball was recycled towards him.

Both De Bruyne and Gündoğan kept close to their counterparts while Rodri often stayed behind and took over the marking once either of the former two stepped up. And this was a big feature in their pressing tactics. Both midfielders were often the ones chasing the ball up and/ employing pressing traps.

One such instance can be seen below as City leave a channel open for Marseille’s backline and then, once the ball starts rolling towards the midfielder, both De Bruyne and Gündoğan collapse, forcing the ball back. 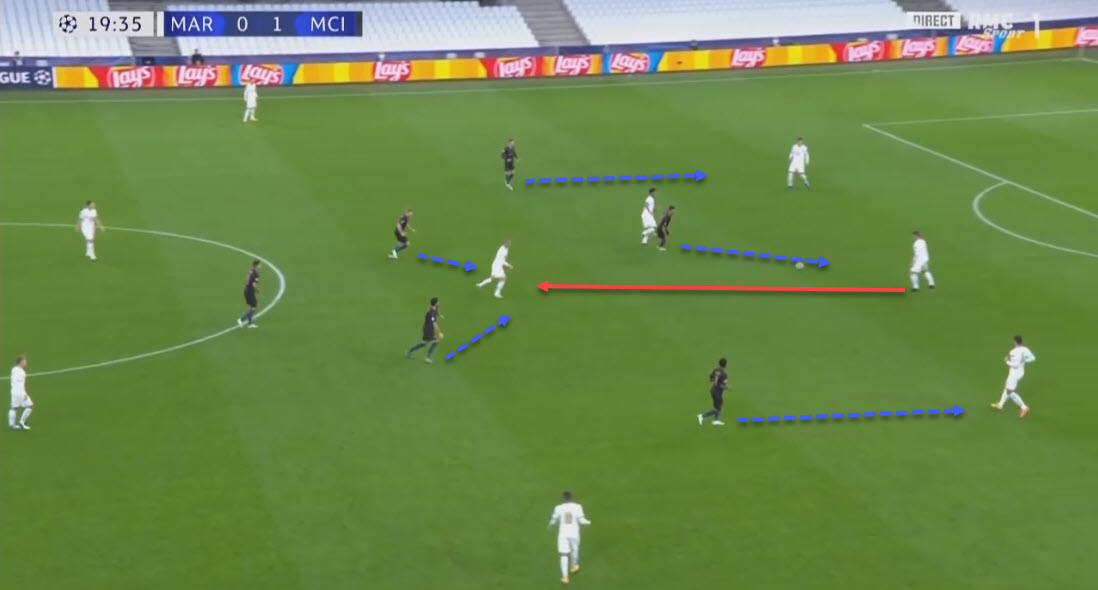 If the ball isn’t won immediately, they continue chasing it even to the goalkeeper, eventually forcing him into a blind clearance. Marseille didn’t get too many chances for a steady build-up and after seeing it wasn’t worth it, they started utilising the long balls much more often.

However, even that didn’t work out the way they wanted it to because winning the second and the first balls was extremely difficult against a heavy man-marking Manchester City matching them player for player.

The guests’ pressing was a major factor in the first half, which was much more intense than the second one. Below, you can see how Manchester City got four shots simply from Marseille’s losses in the first 45 minutes.

But just seeing that 33% of all of their first-half losses happened in their half is worrying enough and was a result of Manchester City’s pressing and counter-pressing upon losing possession.

The only instances when Marseille could play through it was when they managed to make use of Gündoğan’s and De Bruyne’s aggressive runs forward. In those cases, the likes of Cuisance or Thauvin would drop slightly to receive the ball in-between the lines and then turn to transition it quickly.

You can see an example of that down below where Gündoğan is once again caught out of position, leaving his man unmarked. 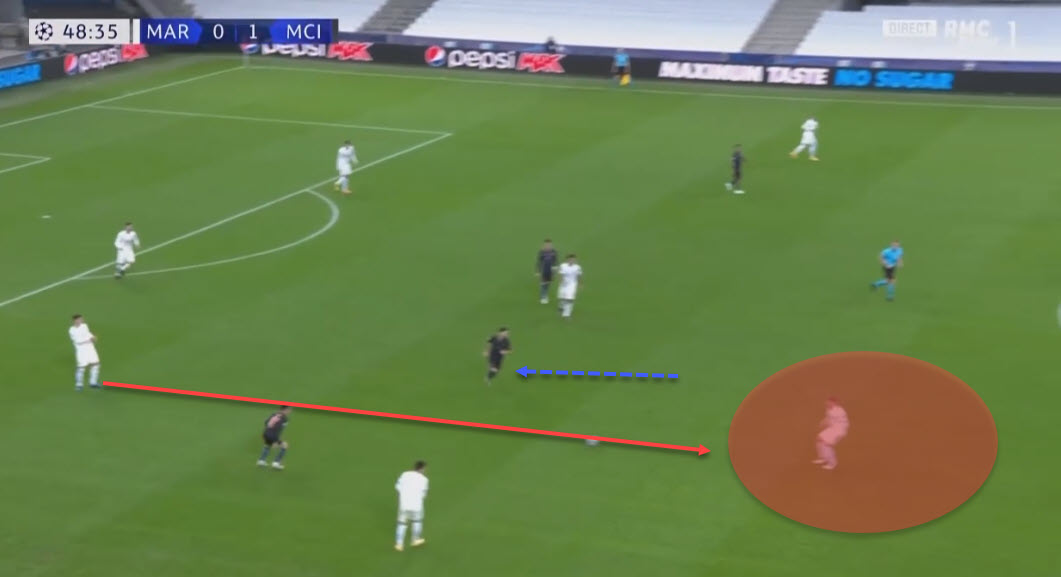 At the end of the day, Manchester City were deserved victors and there was not much Marseille could do about it. The entirety of the game was dominated by the away side and a 3-0 scoreline is a just representation of what transpired on the pitch.